Ah… Glacier Bay National Park.  It’s an amazing place with a very high density of wildlife on top of wonderful scenery and plenty of glaciers – something for everyone.  The entire Park is the size of Connecticut, though the area we were exploring is the main section with two long “arms”, each more than 50 miles long.  The Park controls the number of boats via a free permit system (so its popularity doesn’t cause crowding), and upon first entry you have to stop at the Ranger Station for a mandatory boater’s briefing, covering the rules for not interfering with humpback whales and seal pupping areas, as well as how to get weather information and assistance.  Once we completed the briefing we were back aboard and ready to head “up bay”.  First stop:  South Marble Island to see the Steller sea lions, puffins, nesting gulls and kittiwakes and cormorants.  It was a breezy day, and as we loitered near the sea lion haulouts the aroma of sea lion habitat wafted over us. 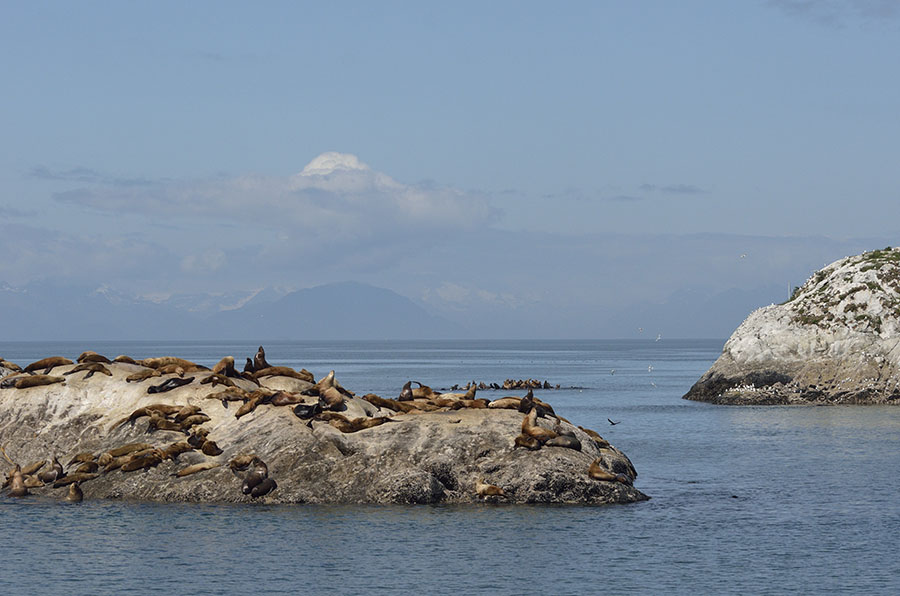 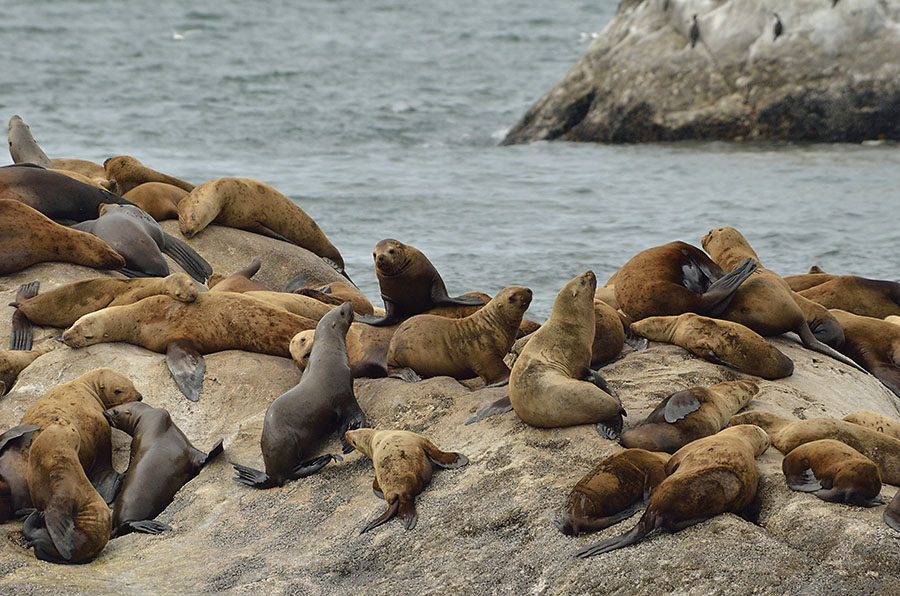 They bark, groan, moan, and generally fuss at each other in between lots of napping.  We saw a few gigantic beachmasters, but we love to watch the younger ones playing in the water. 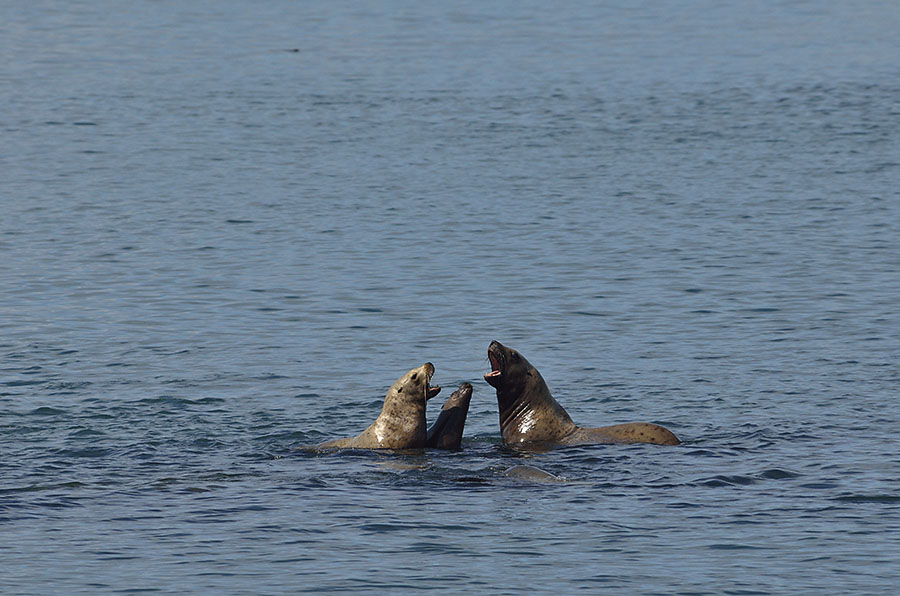 I photographed two different sea lions that had a number marked into their fur, and shared them with the Park biologist who was happy to get a report of their condition and location.  There’s a lot of science that goes on in the Park every day, and visitors report interesting sightings to the Rangers to contribute to the effort.

After enjoying the noise and aroma of sea lions, we eased towards the cliff where a lot of puffins congregate… but not before we had a visit from a humpback – awesome! 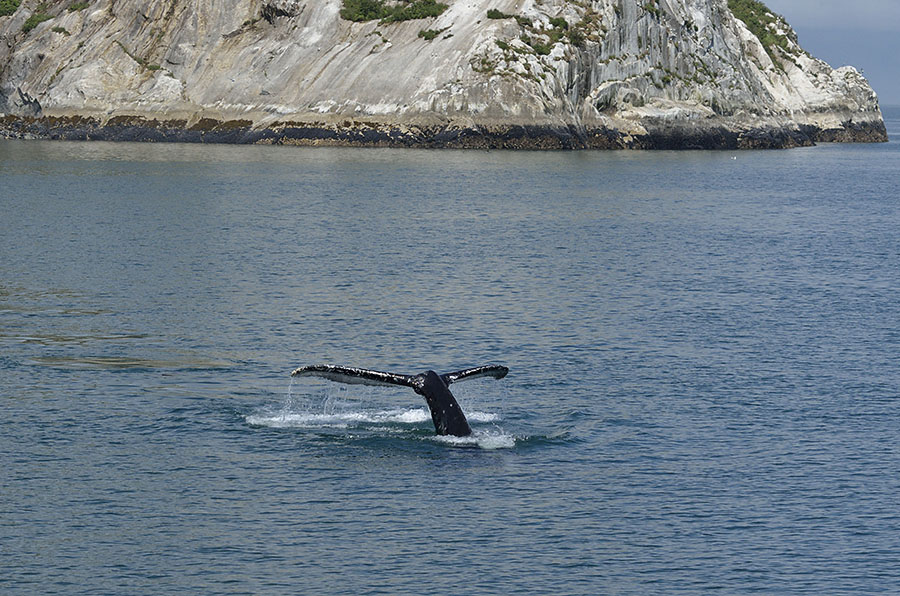 The tufted puffins were preening and primping, shaking their heads and flipping their golden tresses around – the tufts are present during breeding season. 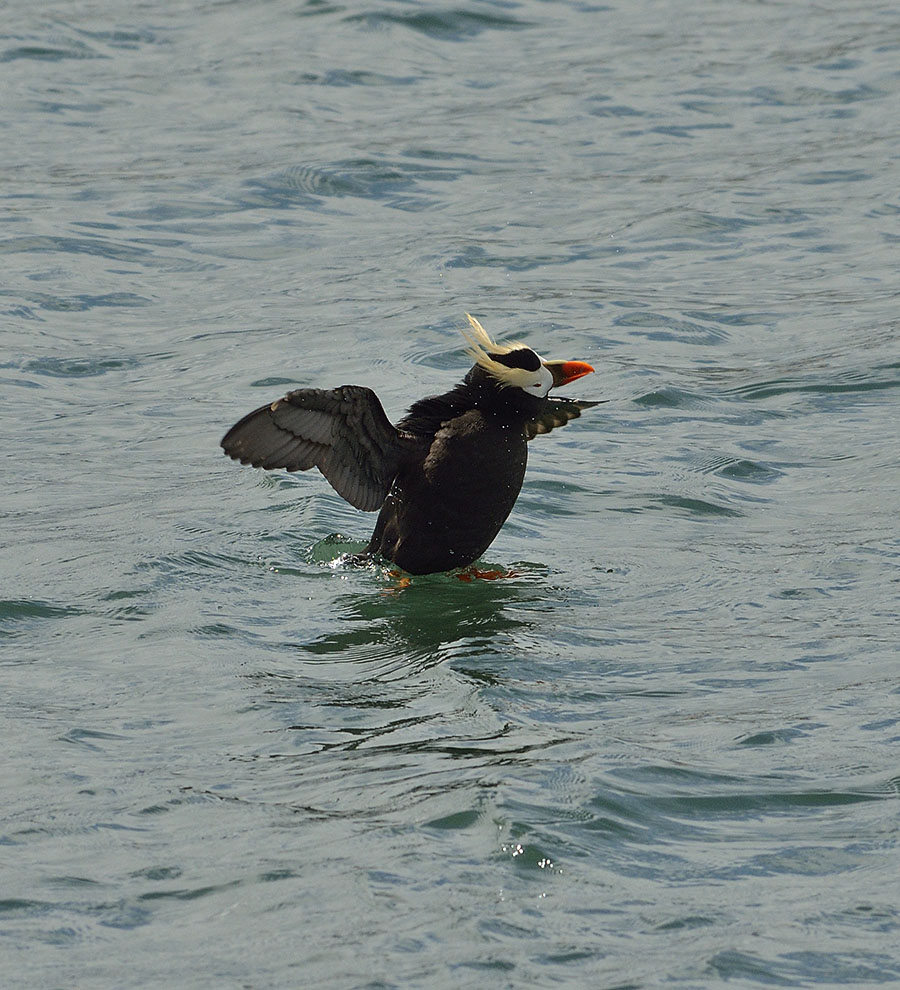 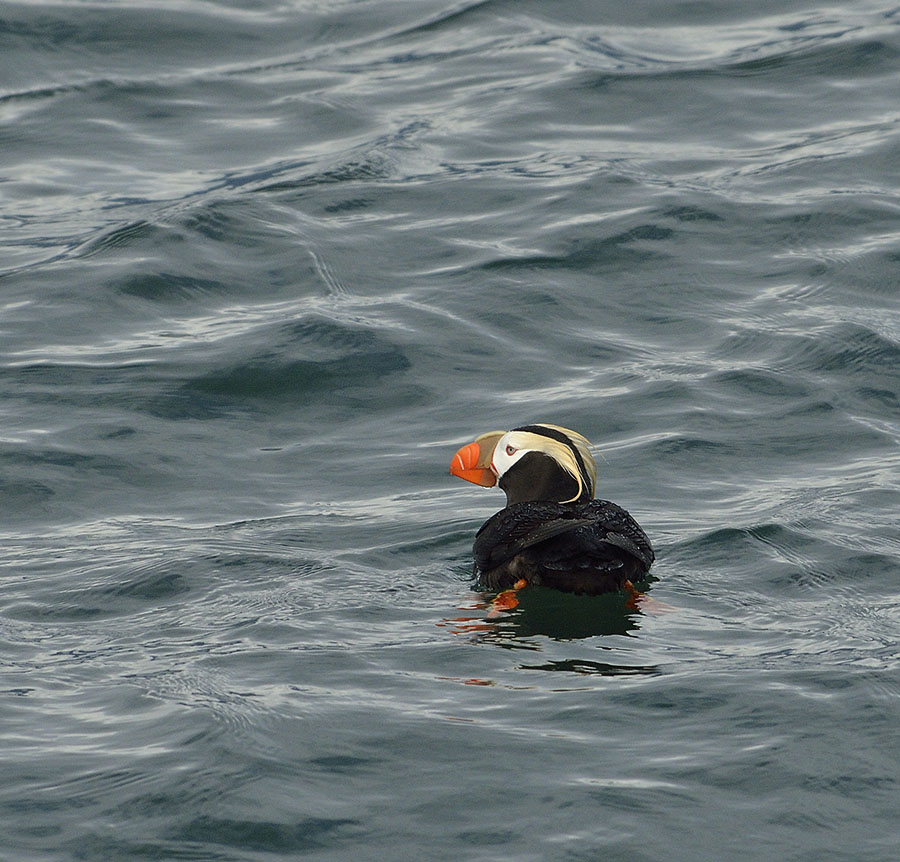 These sea birds spend most of the year on the ocean, except in summer when they dig burrows in cliffs to raise their young.  They’re just adorable little birds, and we watched them for a long time. 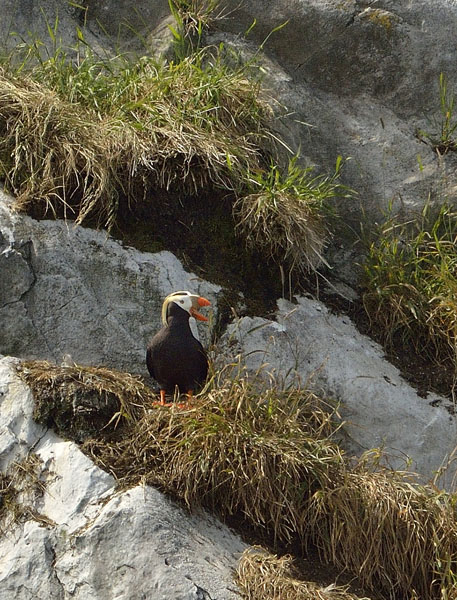 Kittiwakes and some gulls also nest on the cliffs, clinging to the rock face. 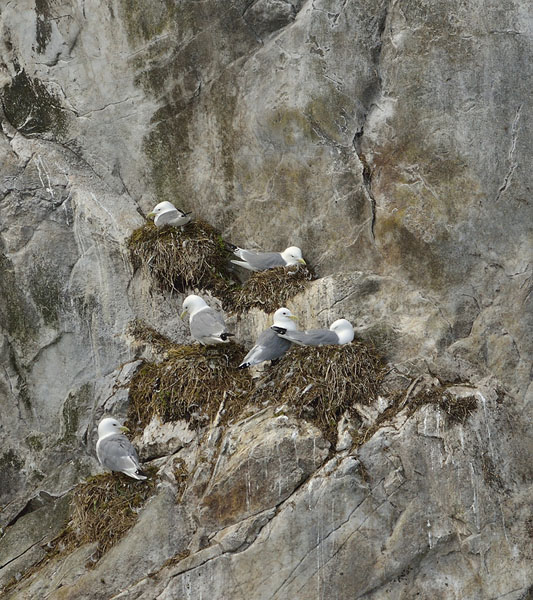 Cormorants were plentiful along with the other birds, and I even spotted one horned puffin among all the tufted ones. 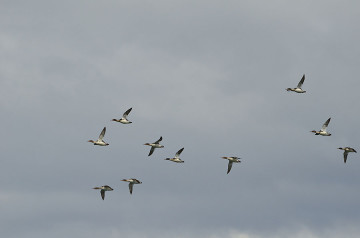 There are a group of islands not far from South Marble where only non-motorized boats are allowed, and I’ve always wanted to explore the area by kayak.  Jim generously offered to drop me off on one side of the island group, and then meet me on the other side a few hours later – what a great opportunity!  Unfortunately the wind picked up and it was against me for the entire time, but I saw sea otters and lots of seals (“rubberheads”), as well as huge flocks of birds.  I love the otters with pups, clutching their little “mini-me” to their chests. 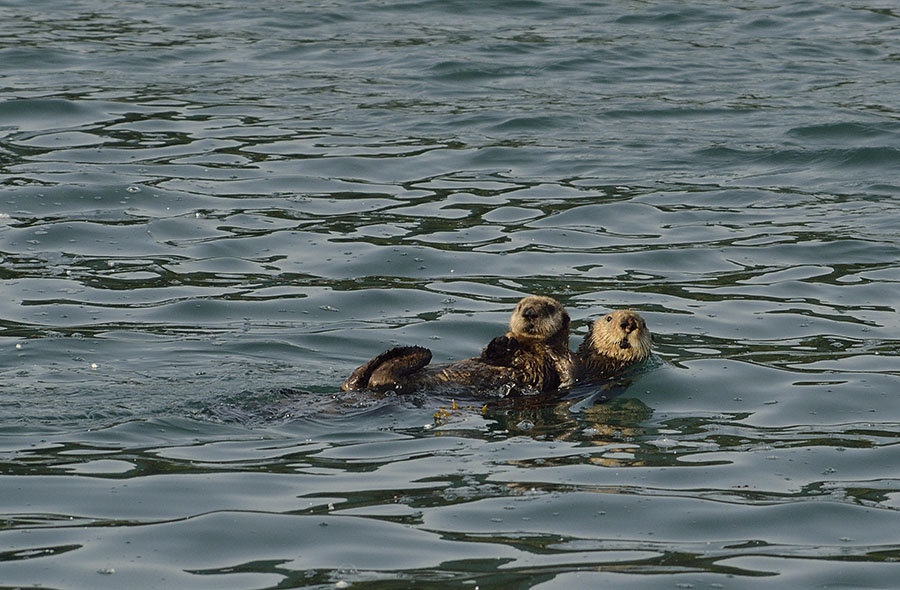 I expected to see more deer or bears or maybe a wolf on land, but it was very quiet.  A few of the islands are nesting areas for different birds, so I kept my distance from those.  It was a long paddle against the wind but I was happy to explore some new territory, and Jim saw some whales and otters on his trip with the big boat around to the other side.

Any exploration of the western arm of the bay has to include a slow pass by Gloomy Knob, a bare mountain that comes right down to the water’s edge – we can bring ADVENTURES quite close to it since the water is so deep.  Our shoulders ached after holding binoculars up for so many hours, but we were skunked – no mountain goats, no bears, and only one eagle near a nest.  We heard reports on the radio of a wolf sighting farther north near Russell Pass, so we headed up there to look… but luck wasn’t on our side.  We also heard reports on the radio of orca sightings, so we hugged the shoreline near the reported area.  The rumored 5-7 orcas weren’t around, but we finally spotted one lone male cruising around. 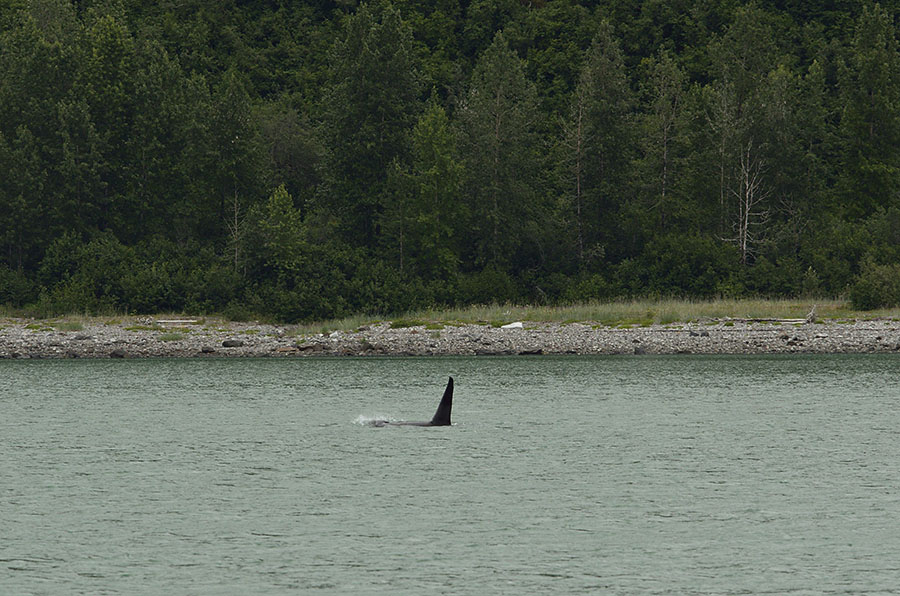 The male orca has a very tall dorsal fin – 5-6′, so it really stands out!  While there are many humpbacks in the bay (as well as all over SE Alaska), orcas are far less common to see.

We chose a new anchorage for the night, and were focused on navigating across a narrow area between two rocky bars.  As we got closer to the shoreline, I spotted a large brown bear on the point – but I couldn’t watch him – I had to pay attention.  As we slowed down to navigate the entrance channel, I saw the bear swimming across the channel – in our path.  He came towards ADVENTURES, but as we got closer he turned around and swam back the way he came until we passed.  Then he resumed his 3/4 mile swim from the island back to the mainland.  Fantastic! 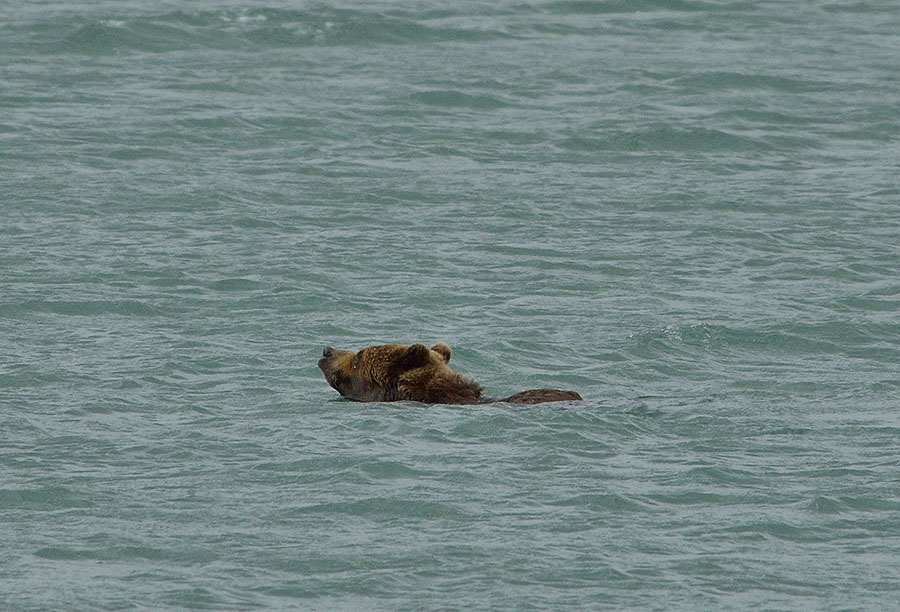 There are more tales (tails?) from Glacier Bay to share… stay tuned.