On the Fourth of July we awoke to blue skies and sunshine – a good omen to start the day’s exploration of Glacier Bay.  Our plan was to head up to Tidal Inlet to look for bears, do a slow pass by Gloomy Knob to look for mountain goats, head through Russell Pass to look for the wolf that had been sighted recently, and then anchor just off the Reid Glacier for some hiking.  Otters and whales and eagles kept us company as we cruised towards Tidal Inlet, where there is a wide gravel flat cut by streams.  It’s a good place to look for bears, and luck was with us – we spotted a brown bear sitting with a little cub running all around her, frolicking.  The bears were a good distance away from us, but we nosed ADVENTURES close to shore and watched until our shoulders ached from holding up binoculars.  The sow started walking across the gravel delta, crossing the largest stream with ease while her cub bounced along behind her until he got to the deep rushing water and hesitated.  Momma bear kept walking and didn’t look back – a bit of “tough love” – and the cub finally took the plunge into the fast moving water and struggled across.  After a good shake, he caught up with his mom and they disappeared into the woods.

Light winds allowed us to just drift in the deep waters of Tidal Inlet for a little lunch break, and then we rounded the corner towards another beach and Gloomy Knob to see what else we could find.  We had heard reports on the radio about sightings of a brown bear sow with three cubs over the past week, but the last report was for a spot farther north than where we were.  It’s unusual for a bear to have three cubs so these bears are of great interest to the Rangers.

Approaching the beach with ADVENTURES, I was almost ready to start turning away when Jim yelled “Stop!!”.  There, on the beach, was a big brown bear laying down for a nap. 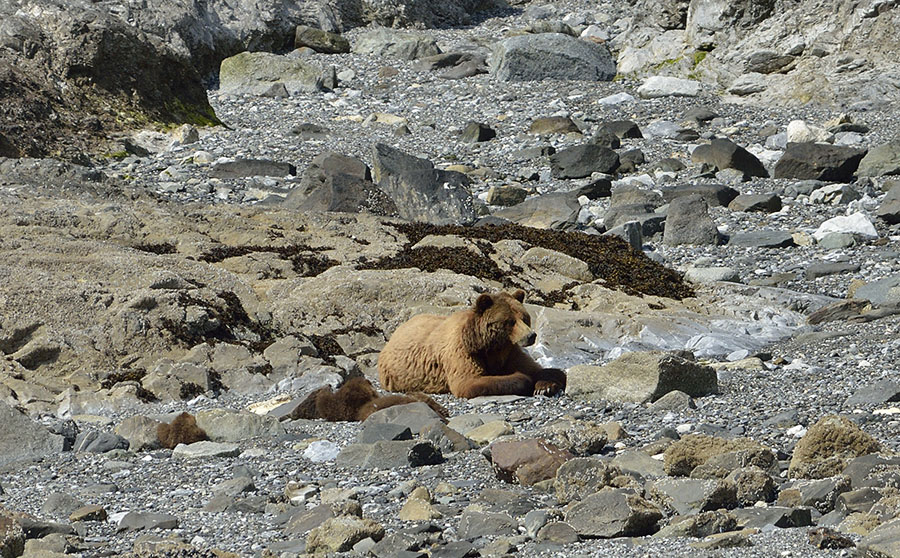 The bear would occasionally look around, but then put its head back down on its paws and go back to sleep.  As we nosed the boat closer, we started to see some rocks that were decidedly furry, and realized that we had found the sow with the three cubs – YOWZA!

From a distance of about 150′ and the safety of the tall bow of ADVENTURES, we watched this little family napping and snuggling together, and then sitting up. 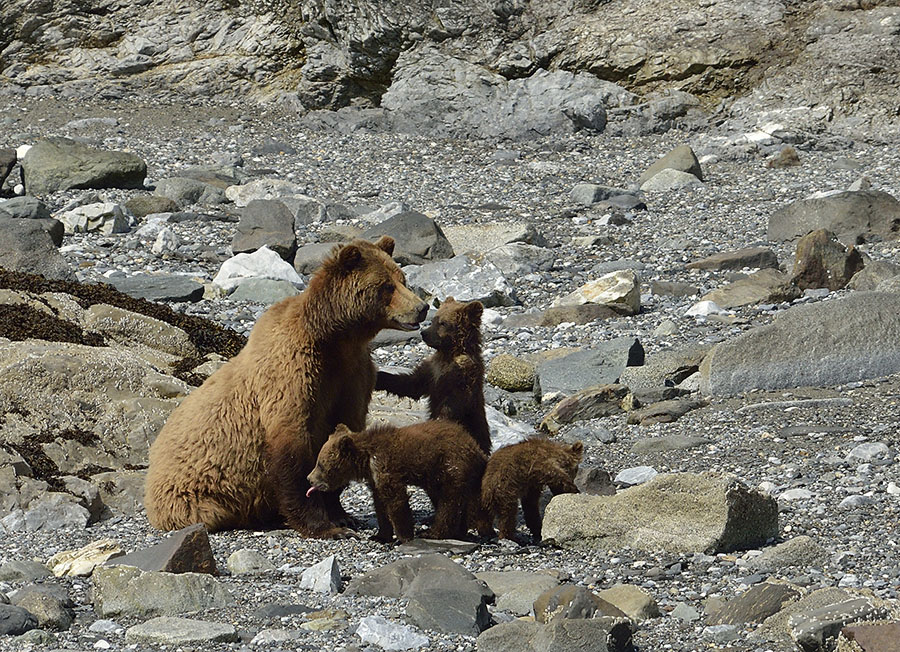 The sow looked all around, didn’t pay any attention to us, and then walked a short distance to another spot on the beach… 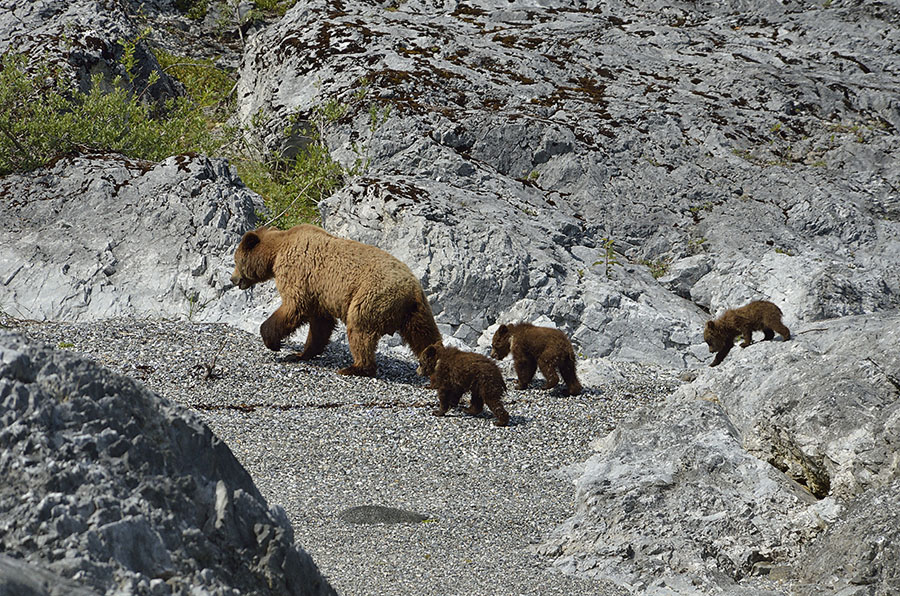 …where she flopped down on the ground on her back, clearly a very tired mother.  Talking with one of the Rangers a few days later, she commented on how large this bear’s claws are… as you can see. 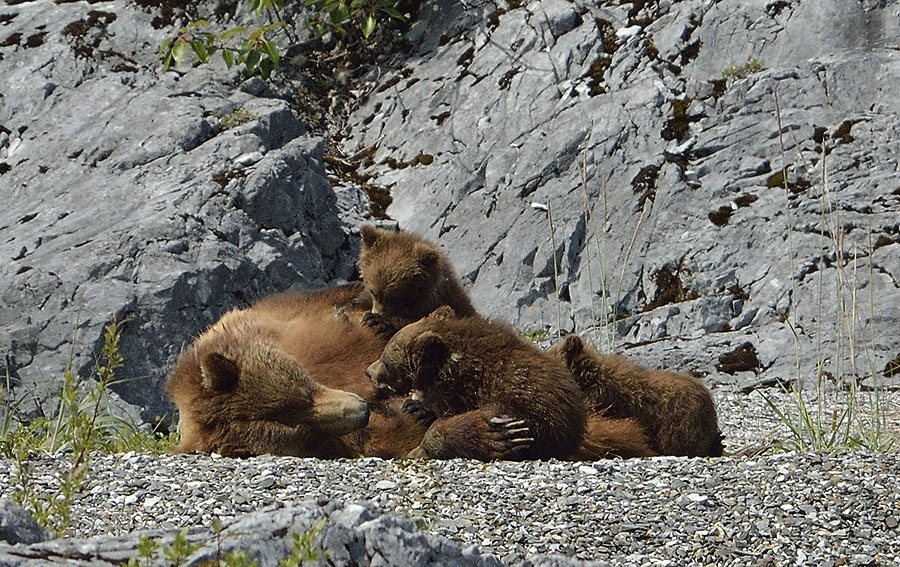 The cubs eagerly began to nurse as we sat in awe of this incredible sight.  She cuddled and stroked each cub with one of her paws while they nursed – so tender and gentle. 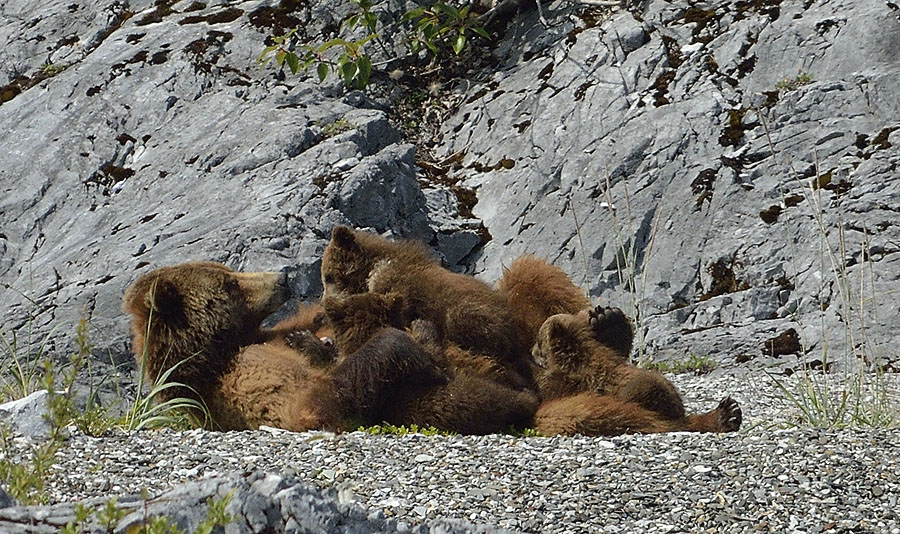 Reluctantly we left the little family to nurse and nap, speechless at our good fortune to see such a sight to make our July Fourth a memorable one.

Rounding the corner to cruise slowly along a scoured cliff called Gloomy Knob, we were looking to see if there was any activity by an eagle’s nest when we spotted several mountain goats – nannies and kids! 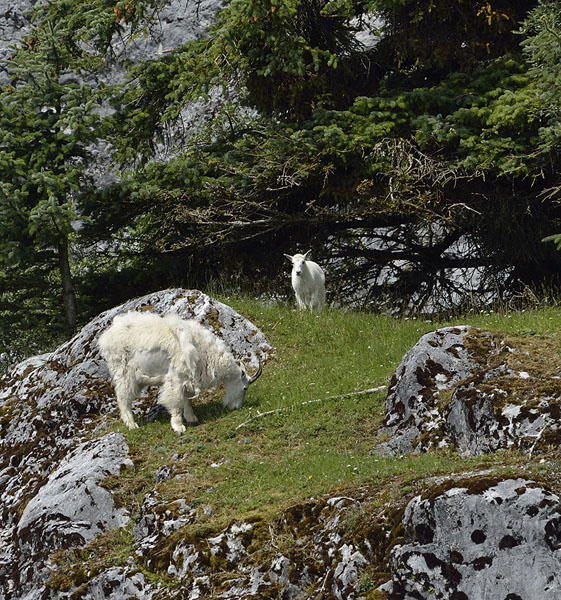 The nanny in the photo above was shedding her coat, and I could just imagine the wonderful sweaters that I could knit with that wool. 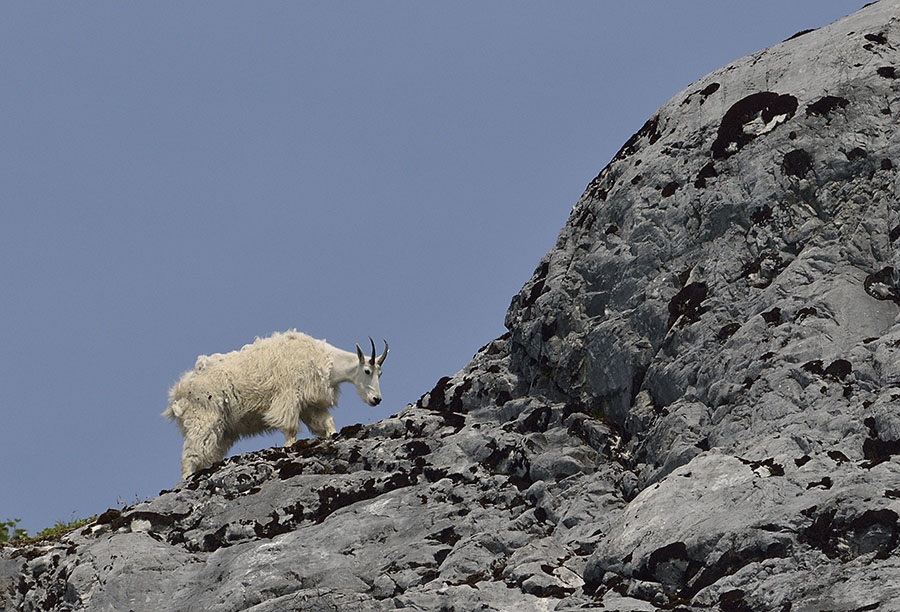 Higher up there was another nanny and kid, and the little goat was really struggling to find a way down to its mother.  It eventually did climb down to her, learning to be brave on the steep rocks as mountain goats need to be able to do. 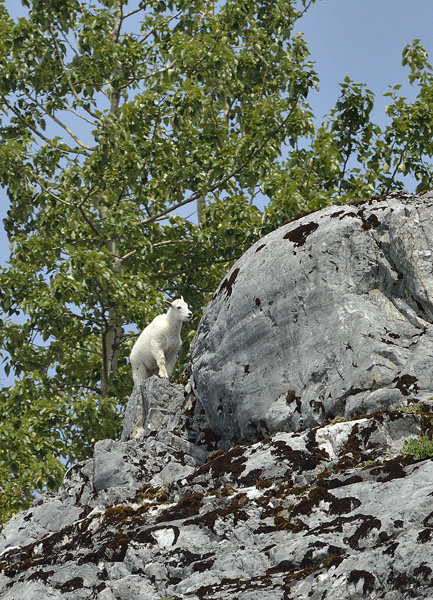 We were hoping for a wildlife trifecta and that our good luck would reward us with a sighting of a wolf, but that remains an elusive animal on our wish lists.  Capping off the day we dropped the anchor in a little bay by the Reid Glacier.  It’s a great treat to be able to watch the changing look of the ice as the sun moves across the sky.  After a good night’s sleep and a chance to rest our tired shoulders (from holding binoculars all day), we were ready for some hiking. 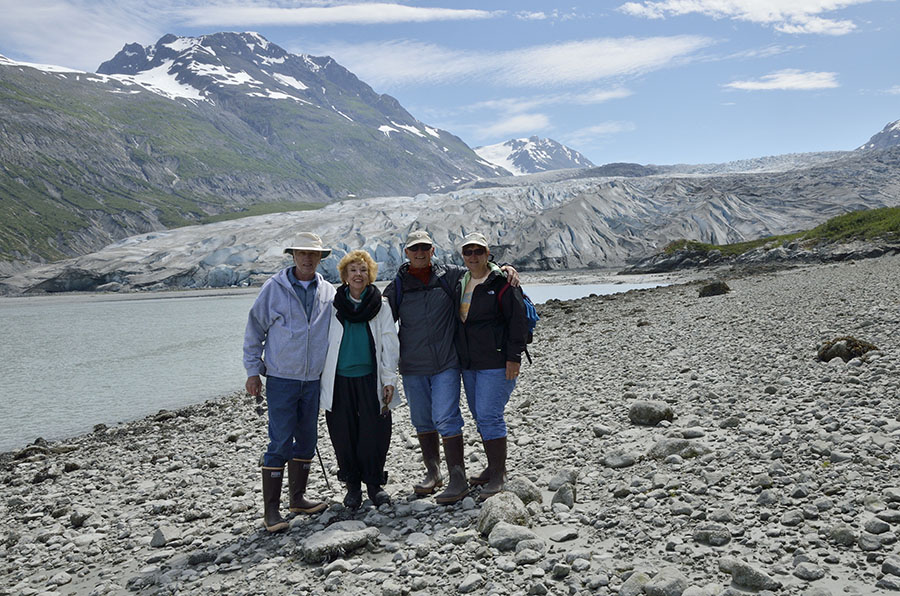 Along with friends Hank and Nancy, we anchored the dinghy on the rocky shore and hiked across a landscape that was scoured by the glacier as it retreated over time.  Snow and ice melting create many little cascades and streams, and fireweed and a few other flowers are starting to grow, pioneer plants putting nitrogen back into the ground which will eventually help larger plants and trees to establish themselves on the rough terrain. 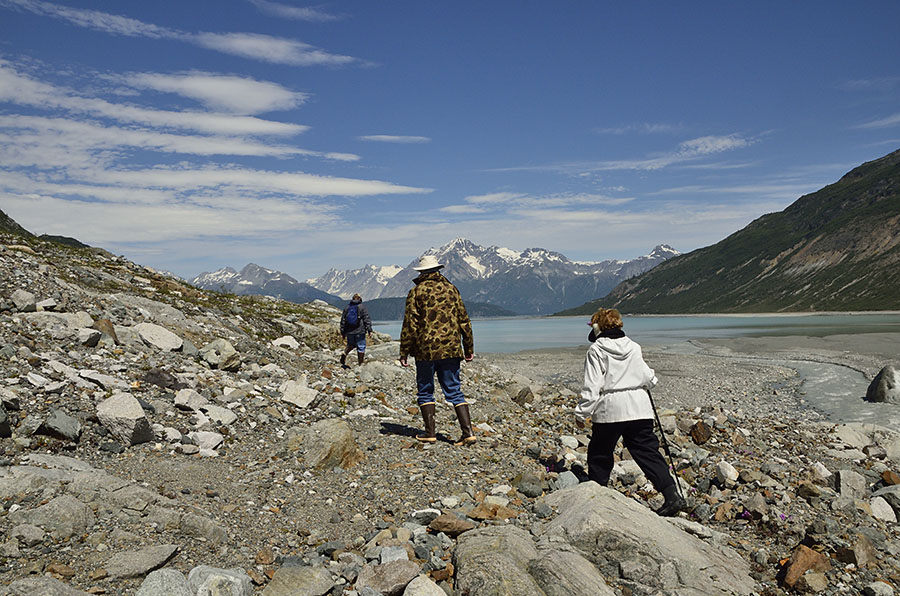 Our goal was to climb to the side edge of the glacier and touch the ice, and we were able to scamper up on the ice, investigating rocks that were carried great distances as the glacier traveled, perched on top of the glacier looking very out of place.  We continued to have perfect weather – clear blue skies and light winds, and it’s not usual to have such a long string of dry sunny weather in a rainforest.

As we were heading back towards the dinghy, we spotted a black bear down on the beach. 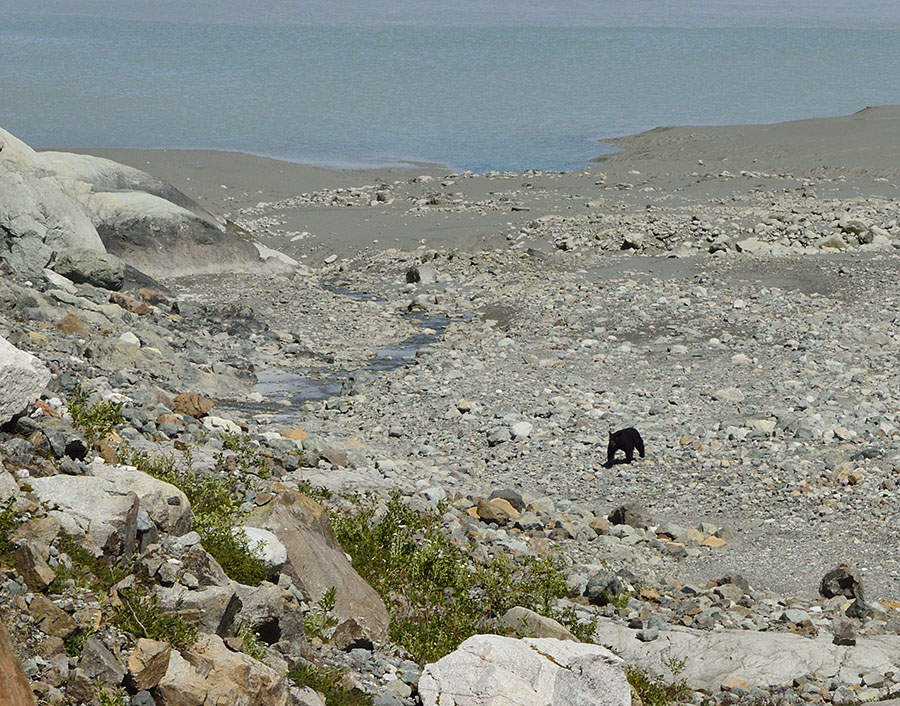 The bear was a good distance away, and we were excited to see more wildlife, especially in the stark landscape.  Jim was ahead of us, scouting a path over the rocks and down towards the dinghy when the bear decided that it preferred the same path that Jim wanted, and it started to walk up towards him.  Jim clapped his hands and talked to the bear to make sure it realized that humans were present, and the bear veered off and took a higher trail.  As the bear rounded the boulders it could see three of us standing together – you can see it perked its ears up… 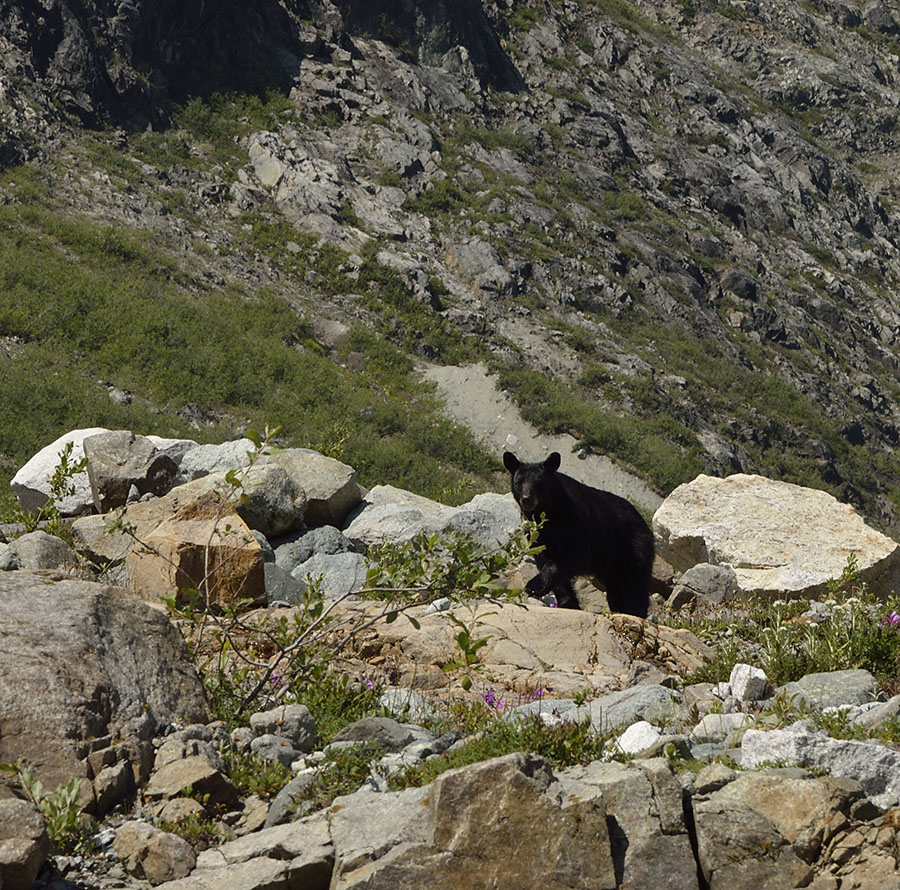 …and as soon as it got a good look at us, it hustled away. 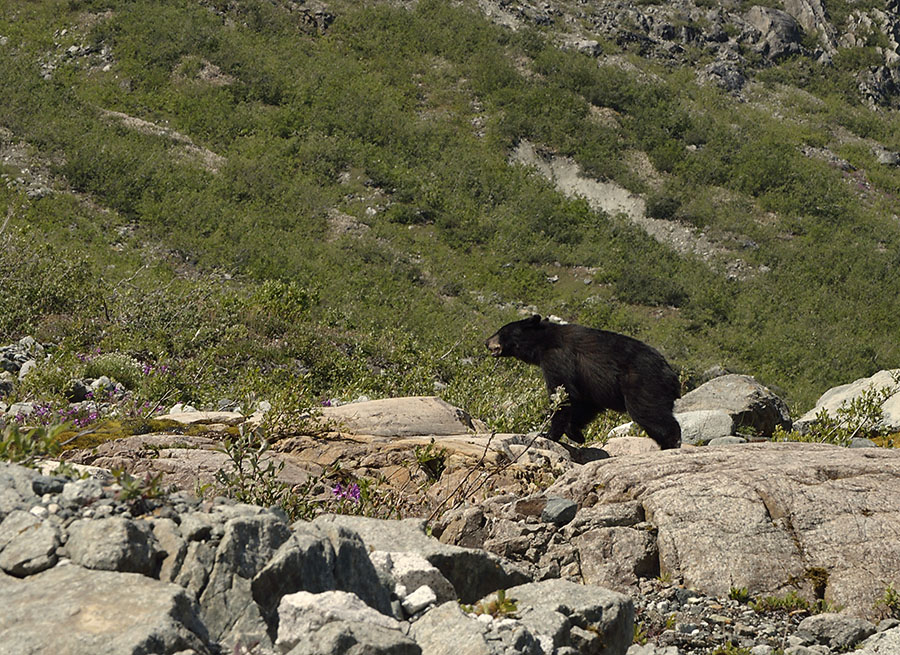 I would say that those might be the best two days we’ve ever spent here in SE Alaska so far, in terms of wildlife encounters.

But then I decided to go for a little paddle in the kayak to photograph some birds along the shoreline, and had another wildlife adventure… that story will have to wait until the next post.