We’re tied up to a refuge float in a rocky little cove at the intersection of Icy Strait and Chatham Strait after a very long, foggy day yesterday.  We had to find our way into this new-to-us spot in pea soup fog with less than 100′ of visibility – not our favorite thing to do, though we can manage it safely.  Today’s forecast called for more fog in the morning and then rain, so we decided to stay put.  A local fellow saw us and came over in his boat to see who and what we are, and he made sure to tell us that moose season opens today.  It’s exciting news for people in SE Alaska, though not so much for the moose.  The local fellow mentioned that a moose ran along the spit right near us just last week, with a brown bear following shortly afterwards – so we’re keeping an eye out (and camera ready) just in case something exciting happens.  (Ten years ago I spent far too much of my life on conference calls and making PowerPoint slides, and if you told me that news of moose season opening would be the highlight of our day… well… let’s just say “we’ve come a long way, baby!”)

We’re on our way back to Glacier Bay National Park, and as usual the blog is hopelessly behind reality.  Our excuse is that we’ve been busy having more adventures, and I’m planning to use some rainy days this week to catch up on photos.  We took a little side trip to the main part of the state, flying to Anchorage and venturing out to explore Kenai Fjords National Park and Denali National Park.

To wrap up the last adventures with the bears at Pack Creek, I forgot to mention one of those “small world” events.  Here we were, in a very remote place with a handful of rangers and only 24 people allowed to visit and we bump into a fellow member of the DeFever Cruisers club – Larry from Juneau who owns “CARINA”, a 1964 DeFever 42 that used to be Art DeFever’s personal boat. 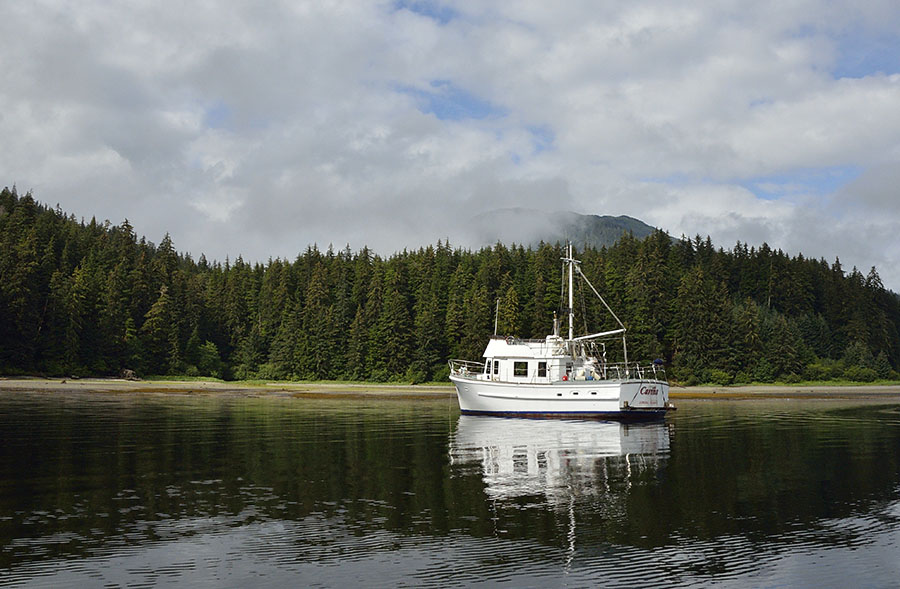 CARINA is in great shape, and we hope to get a tour of her the next time we’re in Juneau.  It was hard to remember that happened after all the excitement with those bears! 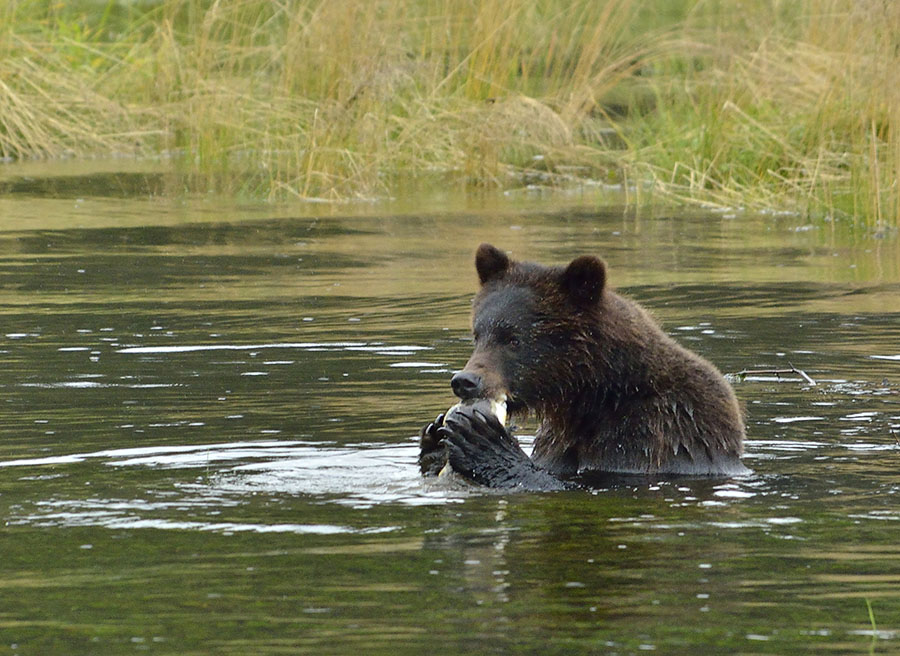 Our trip back down Seymour Canal was as rainy and misty as the trip up, though the wind was stronger than we expected and the wind opposing the ebbing current made for some ugly seas.  Whales were breaching in the canal all day long again, despite the nasty conditions.  It was just too rough to take photographs.  After a long day we tucked into a nice secure anchorage, glad to be out of the weather and we took a lay day to let the conditions settle down.

The next day we headed to the town of Petersburg (where we’ll spend the winter), and we had glassy seas.  We saw lots of whales in Frederick Sound on the way, but it was a funny contrast from the wild breaching we saw in Seymour Canal since all the whales we saw were (literally) sleeping. 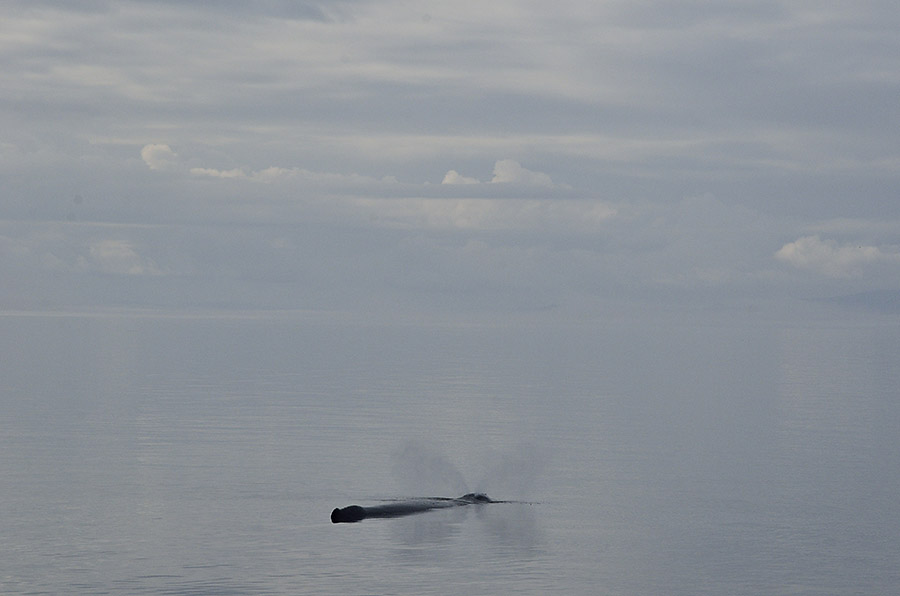 I learned a bit more about whale behavior from a University of Alaska marine mammal expert visiting Petersburg for the annual Rainforest Festival.  Apparently whales sleep on the surface or just below the surface, popping up to take a breath periodically.  It’s another thing to keep an eye out for – we wouldn’t want to bump into one of these guys.

The approach into Petersburg always guarantees sightings of Steller sea lions – they love to haul out on the two big buoys that mark the entrance to Petersburg harbor.  How did that little guy get up on the shelf? 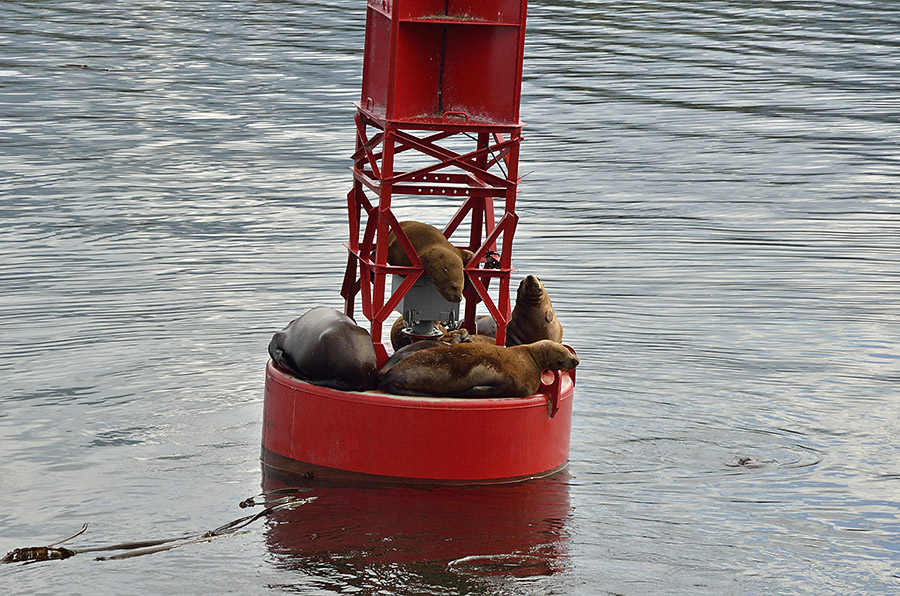 The Steller sea lions are much bigger than California sea lions – the Steller males can get up to 2000 lbs and females 800 lbs.  We see them cruising around the harbor all the time, and that guarantees that I won’t dive under our boat anywhere near them.  The U of A expert told us that they love to harass divers.

The fishing season is winding down, though a few boats are still working.  It will be interesting to see what happens through the winter, and if the sea lions will stick around when there are fewer fish to steal. 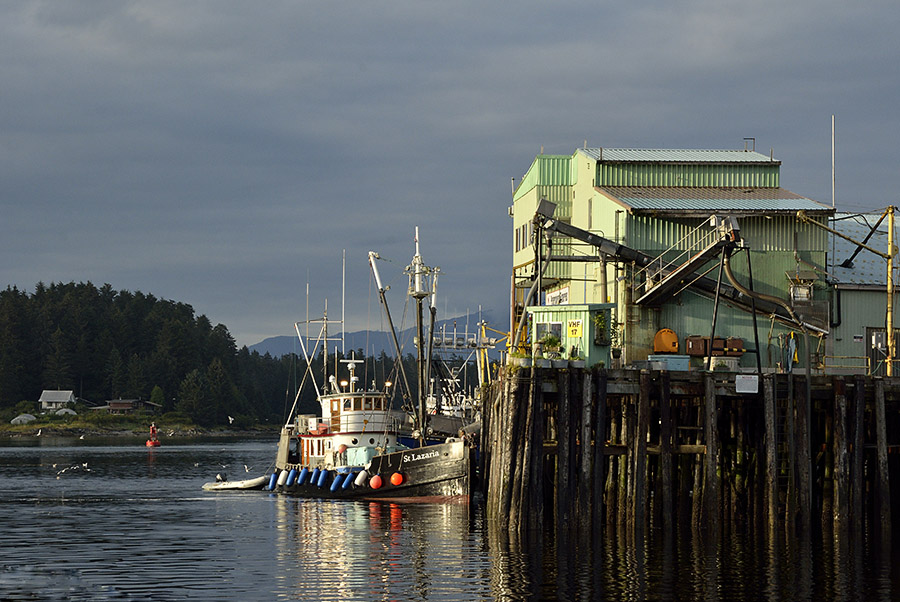 The days are getting noticeably shorter now – we lose over 5 minutes of daylight every day.  The devil’s club and the few deciduous trees are starting to show some fall color.  It will be very interesting to see how quickly the fall season transitions to winter.