Our next adventure (because, clearly, we haven’t had enough fun yet) was a cruise up to the Pack Creek Bear Viewing Area on Admiralty Island.  Run by the US Forest Service and Alaska Fish & Game, Pack Creek is an area where a population of about 22 brown bears have become somewhat habituated to humans – they consider us a part of their normal landscape and they don’t disrupt their normal activities because of human presence.  This last point is very important since the business of being a brown bear means eating as much as possible in the short summer season in order to survive hibernation through the winter.  If human presence disrupted their feeding activity, they might not survive.

We’ve been very excited about going to Pack Creek, and were finally in the right area so we could make the day long cruise up there.  Our minds were busy anticipating all those bears and photo opportunities when… HOLY CANNOLI!!!!!… a humpback whale as big as our boat breached completely out of the water not more than 50′ off the port bow.  The whale proceeded to breach about 4 more times in succession, fortunately moving farther away with each leap.  It took me a few moments to grab a camera and run outside, so this shot was one of the whale’s later breaches. 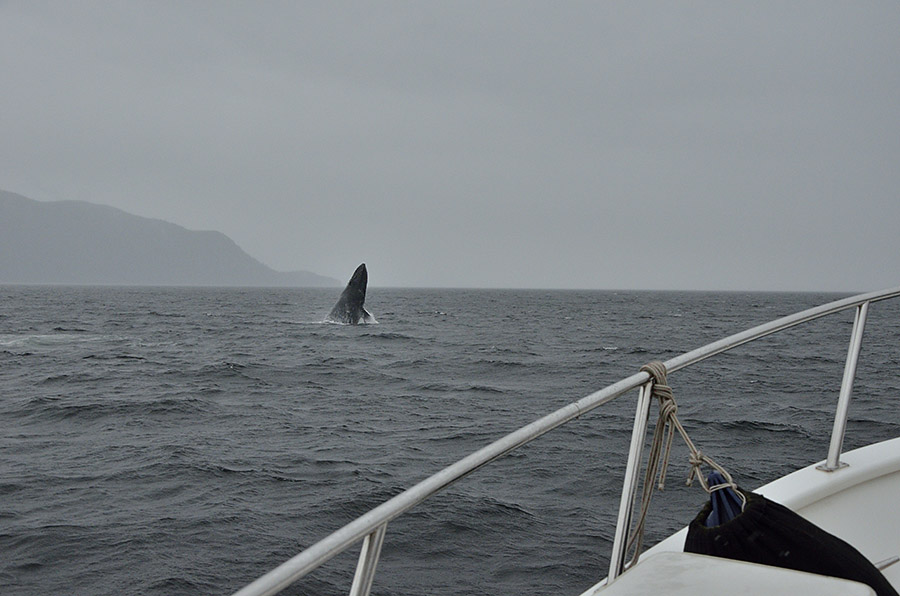 For the entire 23 nm trip up Seymour Channel humpbacks were leaping out of the water, giving us an incredible show.  I might have had many more photographs but it’s difficult to anticipate where the next whale might leap up, and with the hard rain it wasn’t fun to stand outside and wait for too long. 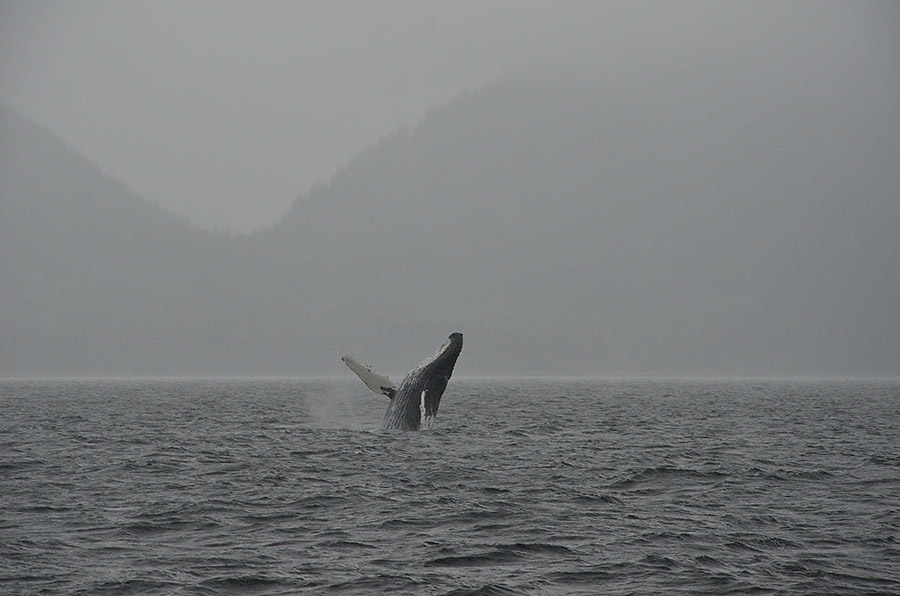 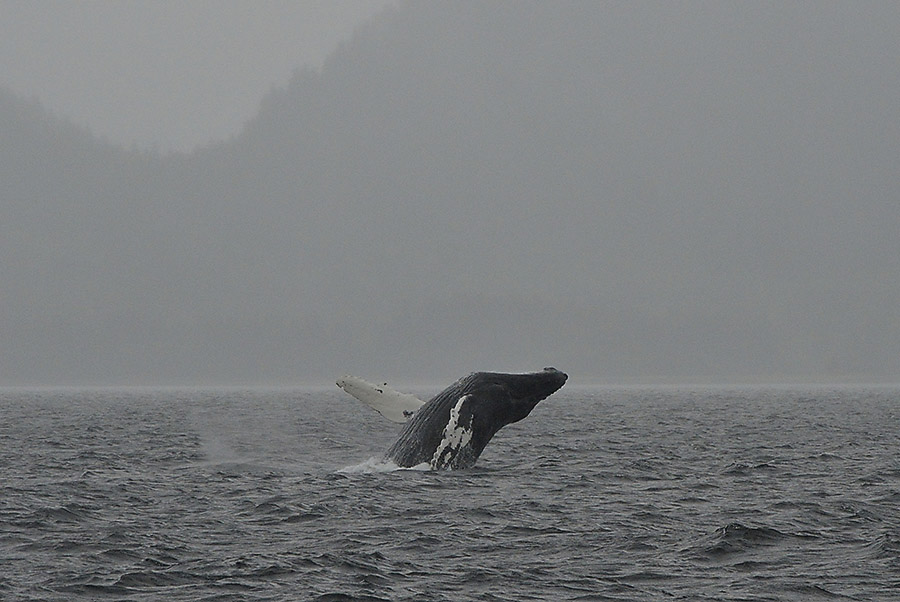 How do we top a day of leaping whales?  We get close to brown bears. 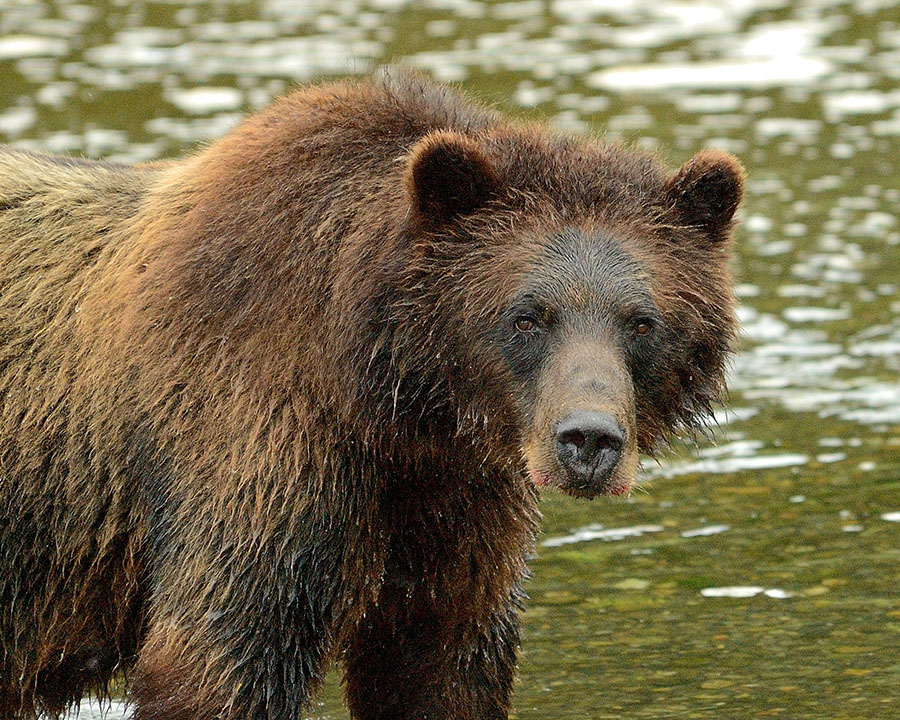 Access to Pack Creek is by permit only, and there’s a limit of 24 people per day during the salmon run season when the bears are most active.  Half the permits go to commercial guides from Juneau who bring customers over by seaplane for a few hours, and the other half are available for people who come by private boat or air taxi.  There are a few rangers stationed ashore, armed with a 30-06 as well as bear spray (just in case) and I give them a lot of credit since they’re out in the open, rain or shine.

We took the dinghy up to the designated landing beach, and followed the ranger’s whispered instructions about tying it to a huge “clothesline” to send the dink off to deeper water a) because of the large tide, and b) to keep the dinghies away from the bears.  If you’ve ever caught a fish or had any food in your dink, the bear can probably smell it.  As soon as the dinghy was tied up the ranger told us to keep quiet and to quickly go sit down, so we sat and looked over to see a brown bear sow (mother) and her first spring cub (born in February-March) walking down the beach along the treeline, towards us.  Wow.  We couldn’t talk if we wanted to – it was just awesome.  The little guy tried to follow mom as best as he could, but he got stuck trying to climb over a tree branch and he was determined to go over it like mom did, even though he could have just walked around the end.  The bears eventually walked past us and out into the intertidal zone to dig for clams, and then meandered into the woods.

What a welcome to Pack Creek!  The ranger gave us a little safety briefing and explained the procedure for moving around.  We read that there were no restrooms or any facilities – it’s a very primitive place – we cringed when the ranger pointed to a clump of rocks farther out the beach spit and told us that was where the ladies go if they have to… y’know… “go”.  You can’t go into the woods since that’s where all the bears are.  (Later on we’ll hike through the woods, but only in a group of 4 or more.  The rock clump is preferable to taking 3 other people into the woods to accompany someone to pee.)  Fortunately we planned to go back to the big boat for lunch and a break, then return in the afternoon so we hoped to avoid the necessity.

The ranger told us that the stream-side viewing area would be a good place to start, and he contacted the ranger there to arrange for our safe passage.  The other ranger gave the all-clear and we were told to walk along the tide line – the “human lane”, about 10′ from the beach at the tree line – the “bear lane”.  We walked right along where the sow and cub had just been, and were met at the other end by another ranger with a gun and radio. 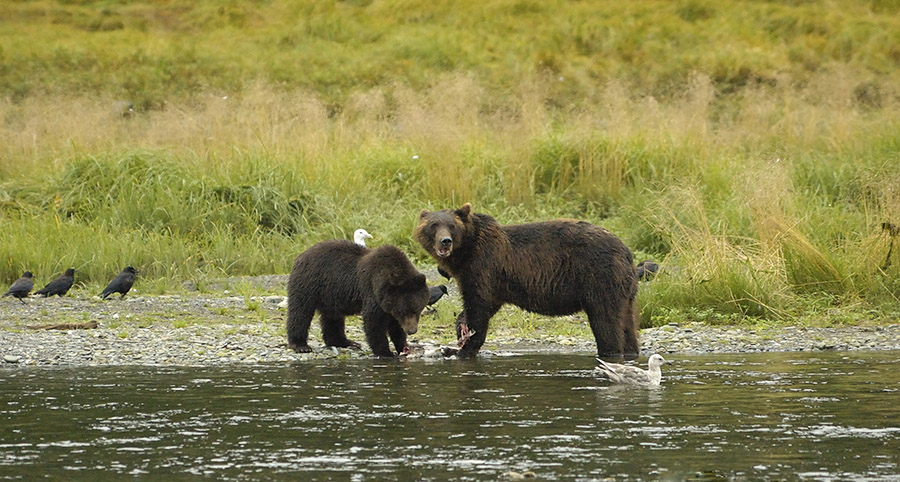 The stream was full of pink salmon, also known as “humpys”, and there were about 6 bears crunching loudly on fish, as well as sea gulls, ravens, and eagles.  The photo above is a sow and a second spring cub – the cub will stay with the mother until they are about 3 years old. 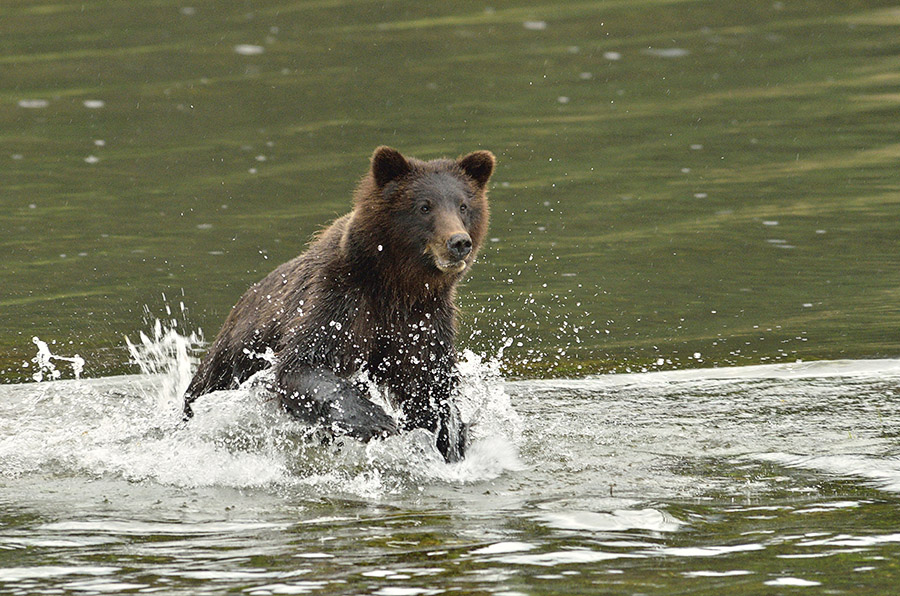 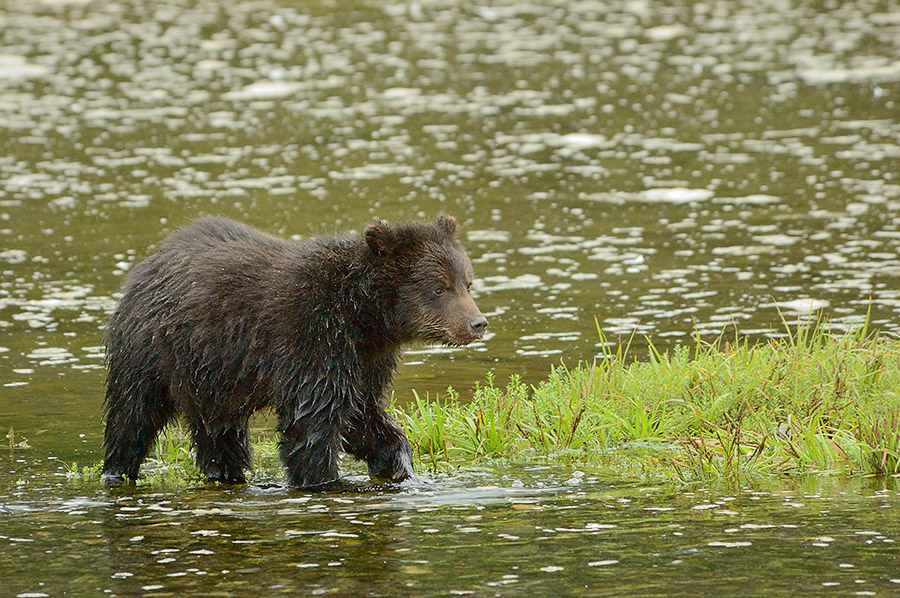 One sow caught fish for her first spring cub, but the sow with the second spring cub expected her young one to do a bit more for himself.  The whole experience was incredible.  The only negative was that a group of serious photographers had set up tripods cheek-to-jowl across the rather small “human area” by the stream, yet none of them were actually standing by their cameras… making it a little hard for us to find a clear lane to view and take photos ourselves. 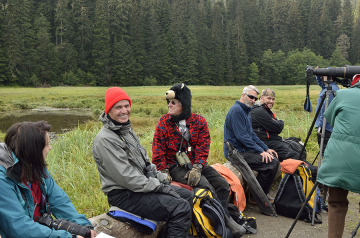 The ranger told us that the  photographers would be gone in the afternoon, so we knew we could return for a more quiet viewing experience later.  At least one of the photographers had a good sense of humor with his bear hat!

We were escorted back along the beach to our dinghy and we took a lunch break on ADVENTURES after a fantastic morning with the bears.

The afternoon was more peaceful, and we were glad to hear that the tripod people were up at the observation platform much farther up the creek.  The beach ranger again radioed the creek ranger and was told that the path was clear for us to walk the tide line to the creek viewing spot.  Only now the tide was higher, and we had to walk a lot closer to the morning’s “bear path”.  We had the viewing area all to ourselves, and we just loved watching the bears fishing, teaching young, napping, and munching. 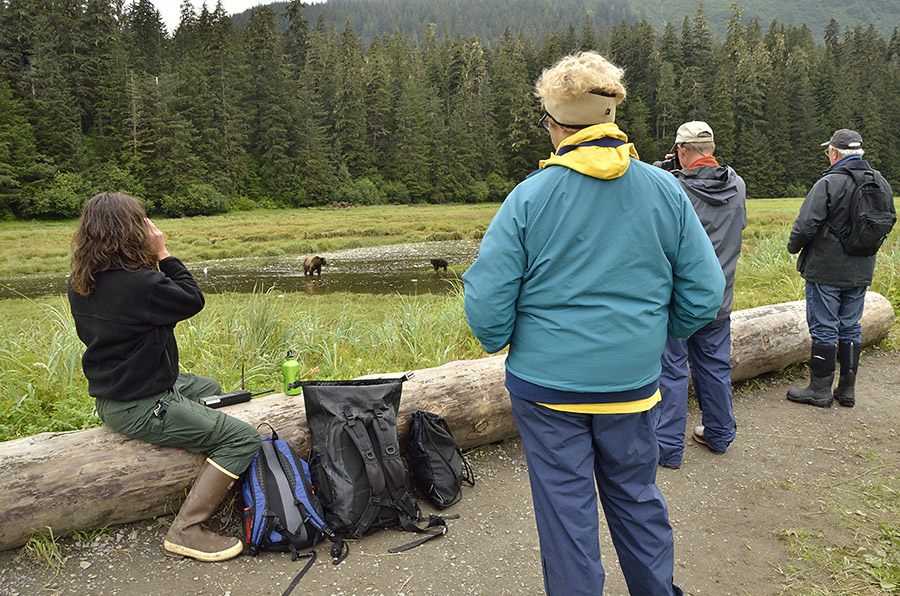 The day was getting late and we wanted to hike up to the observation tower, so once again the rangers checked the path for our return to the beach.  We got about 1/3 of the way there – now walking right where the bears did up against the tree line since the tide was almost all the way up, when the ranger spotted a pair of bears coming our way.  She told us we’d have to go back and wait for the bears to pass, and she was a bit nervous.  Apparently these two are sub-adult sisters – “teenagers” – with a teen’s habit of testing boundaries and acting up.  There was a chance that these two might act more provocatively towards us, though the rangers said at worst some bear spray might be needed to discourage them.  The 30-06 was kept ready.  I kept my finger on the shutter button.

Fortunately the sisters walked past us and went into the stream, and we were rewarded with a wonderful show as they pounced on fish and made faces, and watched for other bears – the morning’s cubs were cute, but these gals had a lot of personality! 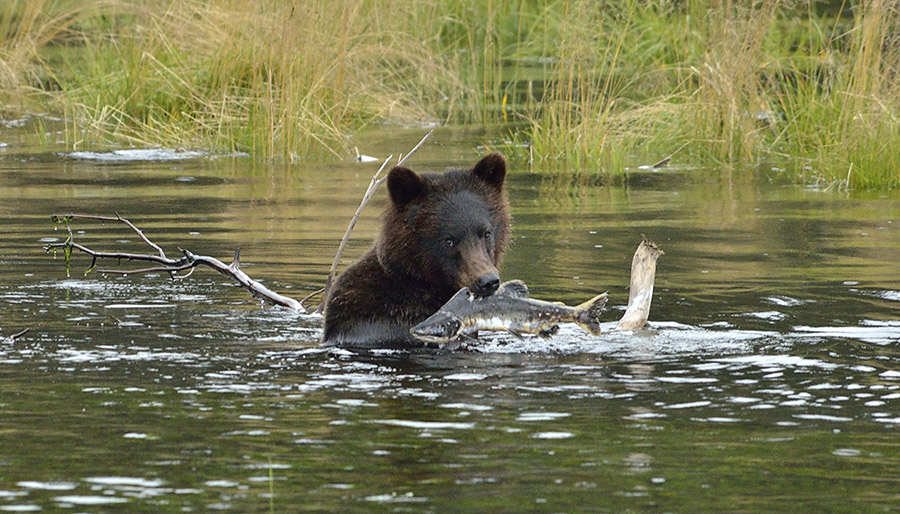 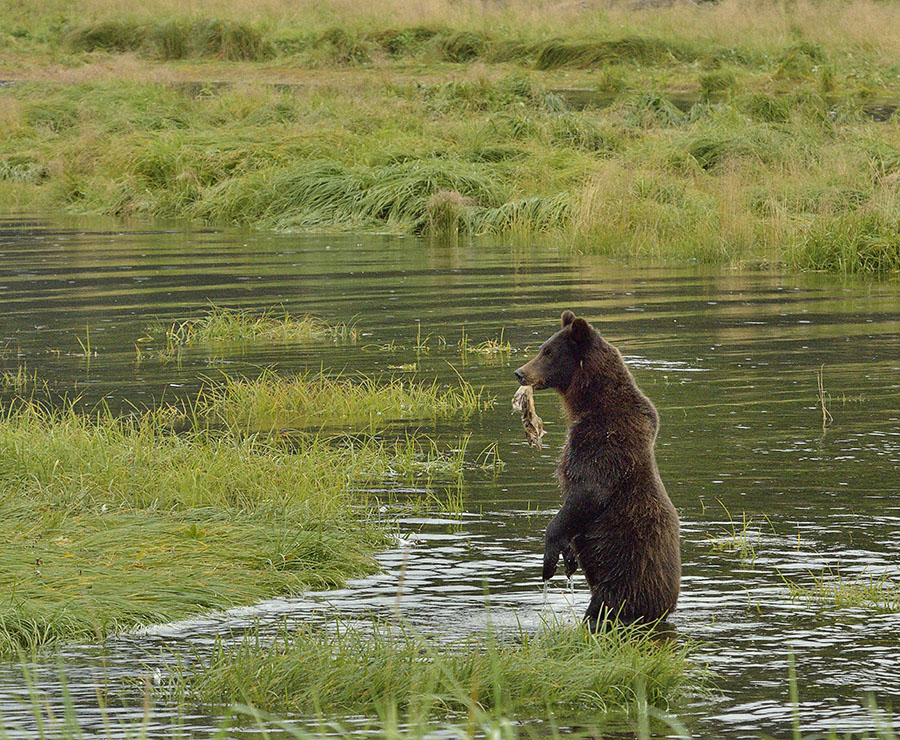 The sisters moved off and it was safe for us to go back up the beach again, wading in ankle-deep water against the tree line with the tide at its highest.  Back at the beach the “ladies room” rocks were well underwater, and the tripod gang was waiting for their seaplane to take them back to Juneau.  Now it was time for us to hike to the observation platform higher up the stream.  Through the woods.  And we would have no ranger escort, though we had to be in a group of 4 or more to make the hike for safety.  We had our bear bells and spray, and we’ve learned how to be “bear aware” so we felt fine about it.  The only hesitation was when the ranger mentioned that they had some occasional problems with a territorial female who might come a lot closer than bears typically do, but they assured us she would go away if we clumped together and waved our arms a bit, and they said they hadn’t seen her in a few weeks.  Right.  With lots of hand clapping and calls of “Ho bear!”, we made our way through a lovely old-growth forest to the viewing platform.  We could see lots of humpys in the water, but no bears.  Not a one.  We did see a beaver dam and the beaver though – the biggest excitement of the woodland part of our adventure.  After the wonderful day we had – we couldn’t really complain!

4 thoughts on “Leaping Whales and a Brown Bear Adventure”