We’re calling this “From Sea to Shining Sea Tour”, since we departed with the camper from the shores of Chesapeake Bay, bound for the shores of Puget Sound in Washington.

Our only break from a brisk pace across the country was the stop in Great Smoky Mountains and Chattanooga, and though we were captivated by all the sandhill cranes we were also reminded of an important historical event – the Indian Removal Act of 1830 where President Andrew Jackson forced the Cherokee and other native tribes to give up their lands east of the Mississippi River.  The Cherokee Nation’s people were marched westward via two different routes to what is now part of Oklahoma in 1838-1839, enduring tremendous hardship as well as thousands of needless deaths, on top of the injustice of being forced from their ancestral lands.  The Trail of Tears is the name given by the Cherokee people to the horror of this forced migration, and it’s one of many important examples of discrimination that should never be forgotten or repeated in any form. 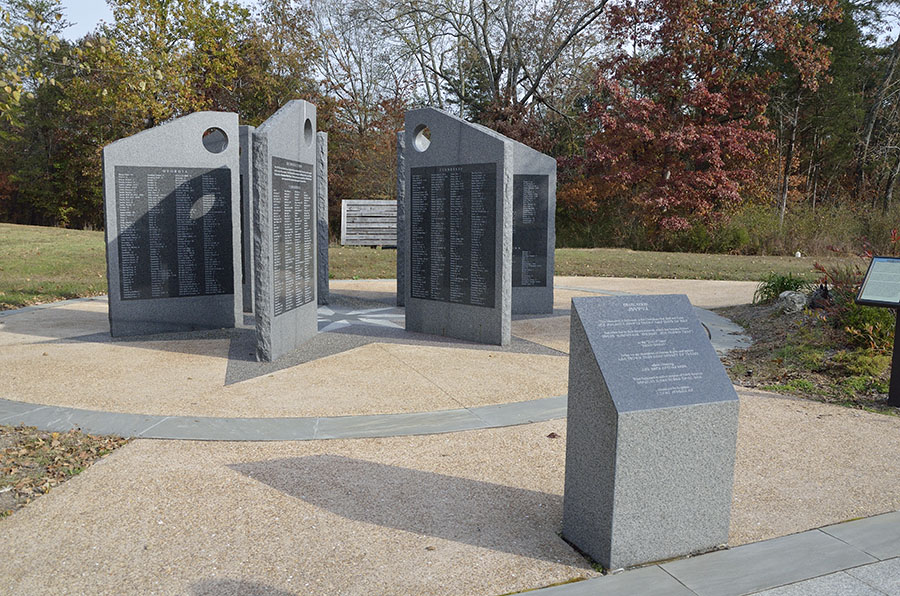 There’s a small memorial and museum dedicated to remembering the Cherokee Removal near Chattanooga, and we made a stop there to learn more and to appreciate the historical significance of the path we would be taking as we headed west. 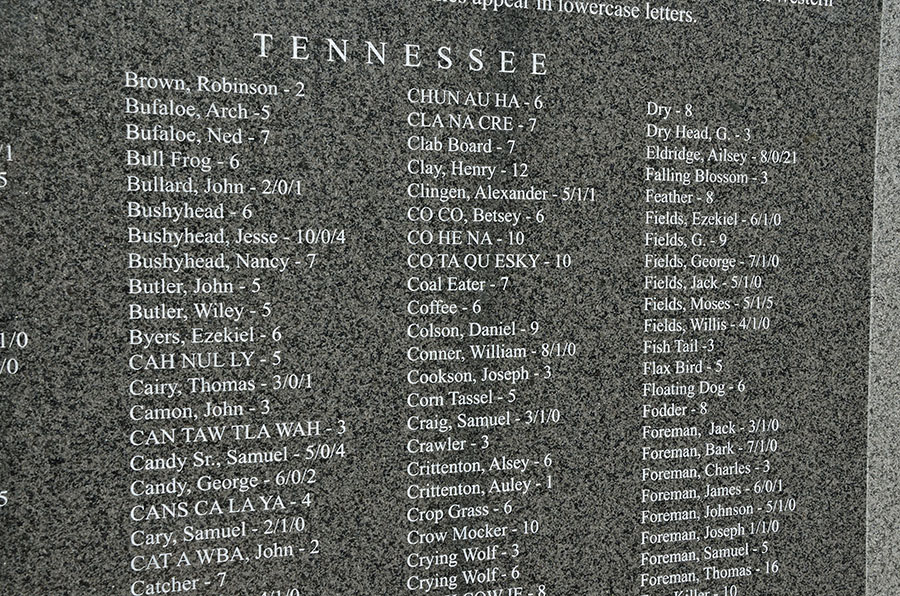 The memorial has the names of the heads of each household and number of family members to be forcibly removed, organized by state.  It was very sobering to see so many families… innocents persecuted for the color of their skin and their beliefs.

As we drove west into Arkansas and Oklahoma we saw many signs highlighting points of significance along the Trail of Tears, and it meant more to us after spending time at the memorial.

We’re used to waiting for weather when traveling by boat, but didn’t think we’d have much trouble taking a southern route with the camper… until a huge weather front bringing snow to the mid-western states also brought high winds to the south-central and southwestern states.  We had to wait an extra day in Oklahoma City since it wouldn’t have been safe to drive with 50 mph winds, and we couldn’t help but notice the tornado storm shelters at the campground. 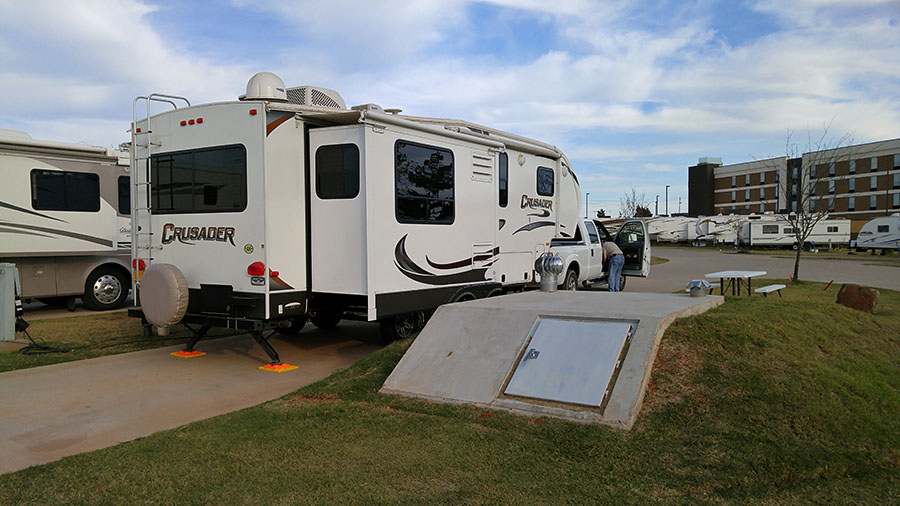 We’ve been through hurricanes, but tornadoes scare us much more so we were glad to keep moving westward… through Texas and into New Mexico where we had our first night below freezing – a not-too-gentle reminder that winter is on the way.  I was amazed at the number of hawks we spotted along the road, though many types are very hard to identify without some time to study details… not easily done zooming at highway speeds.  Windmills to generate electricity were more prevalent as we moved westward, and stereotypical tumbleweeds bounced across the highway in an odd juxtaposition of the modern and something we think of from old cowboy movies.

The colors of the land became more interesting once we got to New Mexico, and it’s easy to forget that the relatively flat sections of New Mexico, Arizona and Utah are really high plateaus several thousand feet up. 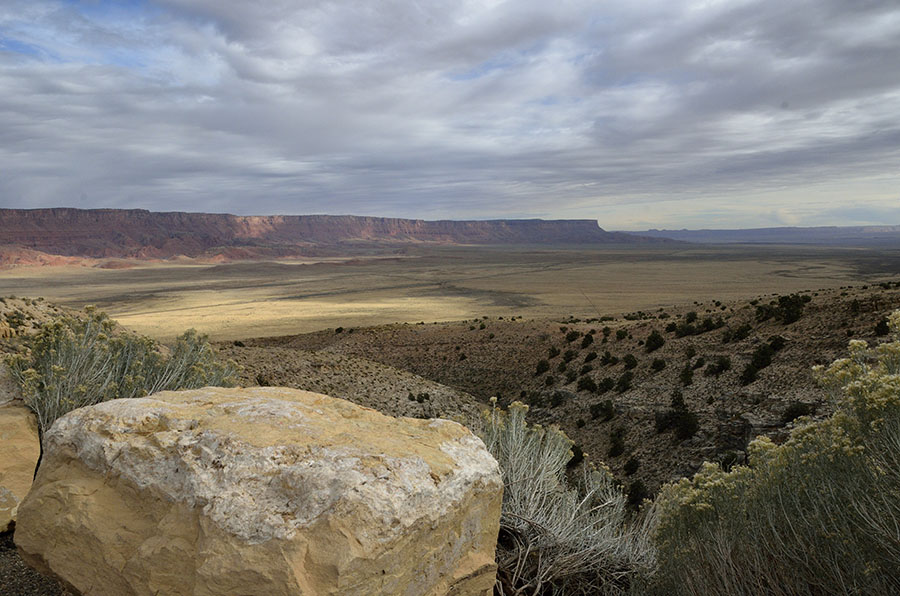 It reminds me of hiking on the high plateaus of Utah years ago, looking down and finding thousands of small sea shells on the ground – this whole section of the country was once part of a vast inland sea!

We paused at the Navajo Bridge in northern Arizona, crossing the narrow Marble Canyon section of the Colorado River, and savored the beautiful colors and shapes of the rocks. 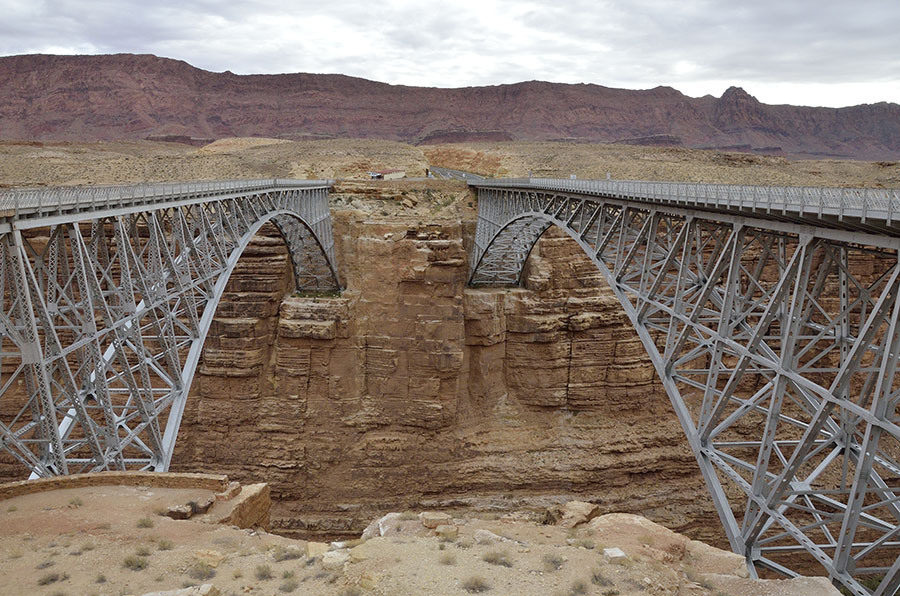 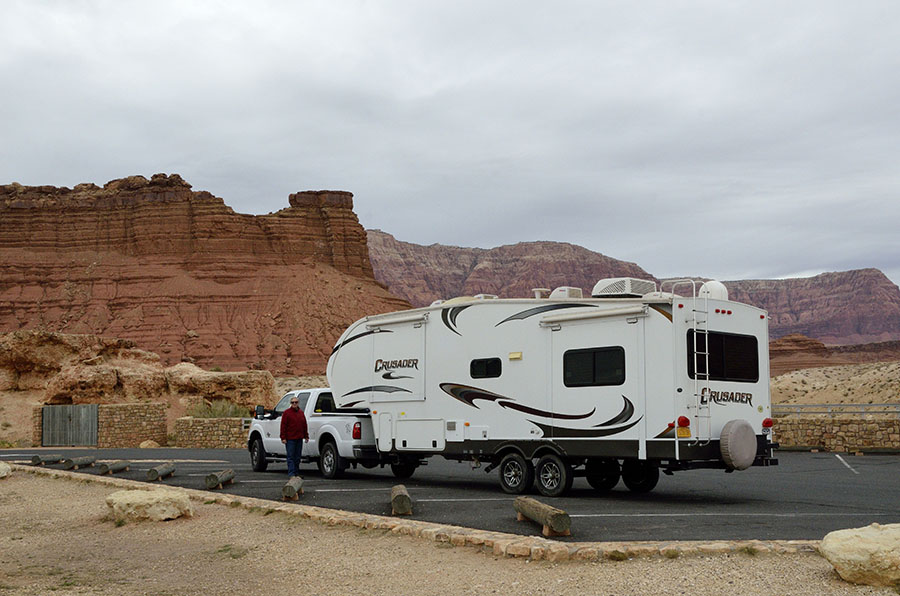 We spent a lot of time on the road driving up and down mountains, some with pretty scary grades!  We don’t often think of the desert as mountainous.  There’s no better way to learn about geography and history than to travel the paths of those who came before us, to see the land up close and imagine what life must have been like in the past.

Sadly our timing didn’t allow for much savoring this trip, but it gave us a taste of places we’d like to return to.  Southern Utah, known as “Color Country” didn’t disappoint, and we just about wept as we zoomed past Zion National Park and a few other favorites from when we lived there in the early 90s.  We paused for Thanksgiving with friends in Walla Walla, WA and for a visit to one of my cousins in Oregon, then completed our “From Sea to Shining Sea Tour” arriving in the Seattle area.  We started this trip on the shores of Chesapeake Bay in Virginia… 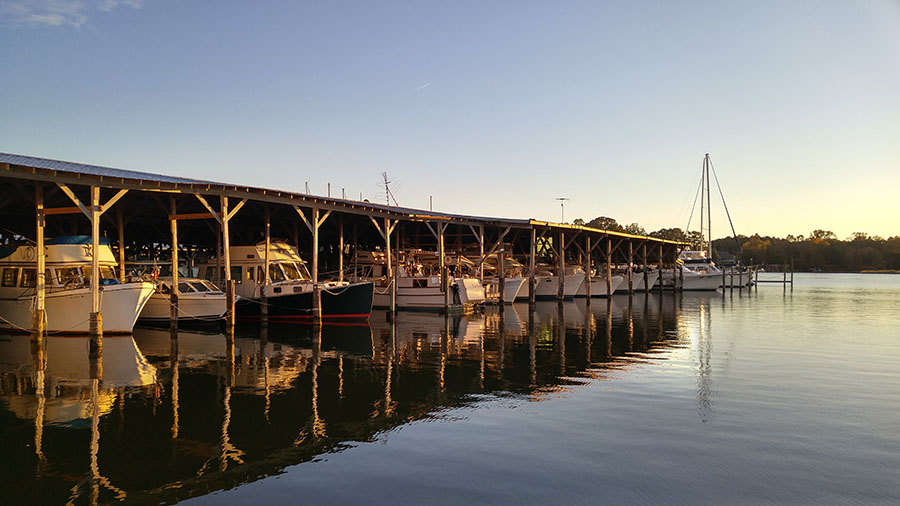 …and ended up on the shores of Puget Sound in Washington. 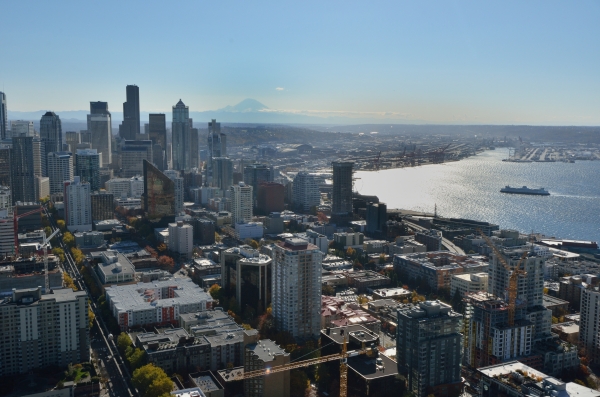 It was a good road trip, despite the fact that we had no time to stop and smell too many roses.  In all we covered over 5000 miles (not all towing the camper), traveling through 23 states and (counting the trip to see polar bears) 3 Canadian provinces.  It was a long time to be away from home, but we spent some time with people we needed to visit, and we missed a lot of people we wanted to visit.

3 thoughts on “Zooming Across the Country”