We heard about a couple who are kayaking from Vancouver Island in British Columbia all the way to Skagway, Alaska – what an ambitious adventure! – and they were reported to be near Petersburg.  There was a bit of a scare since a two-person kayak was found washed up on a nearby beach, so the State Trooper headed out in his boat to try and find them.  Fortunately the kayaking couple was discovered safe and sound, though the Trooper advised them to get some brightly colored gear to help with visibility.  The beached boat found its proper owner, so it was a happy ending all around.  One member of the kayaking couple is a professional violinist, and she’s giving impromptu concerts in some of the small communities she encounters along the way.  The word went out on the radio station and on bulletin boards, and we thought we’d see what a paddling violinist sounds like. 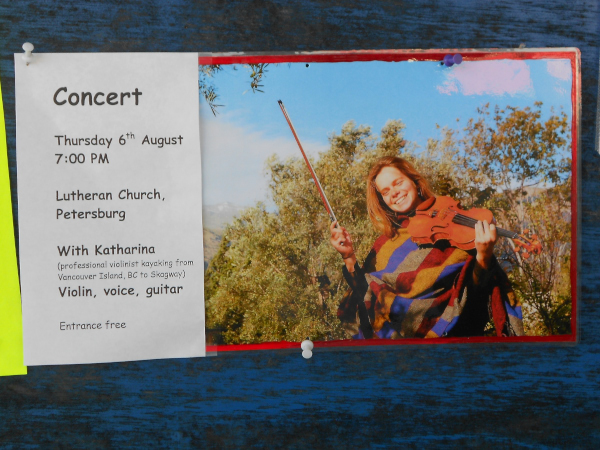 Well, we were absolutely BLOWN AWAY by the talent and passion of this lovely German gal.  She left us breathless with her performance of classical pieces as well as with some contemporary improvisations, then a few tunes on a borrowed guitar.  What an unexpected, fabulous performance.

We finally cast off the lines with friends Mary and Bill aboard, heading south down Wrangell Narrows.  Keeping with the theme of “you never know what to expect”, we left under glorious sunshine and blue skies, but as we turned the corner we were socked in by fog.  It never really burned off – it just came and went, thick and thin, as we cruised. 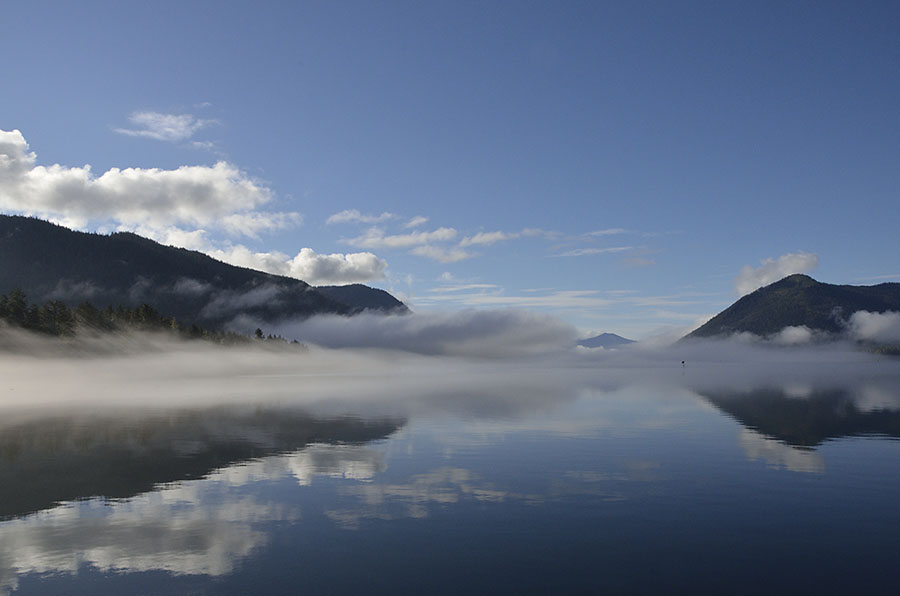 The fog finally lifted and we arrived in Wrangell to check out their excellent museum and to explore the petroglyph beach.  One of the gals in the museum suggested a nice hike to Rainbow Falls, so we spent some time enjoying the forest and all the little details that make a walk in the woods so enjoyable. 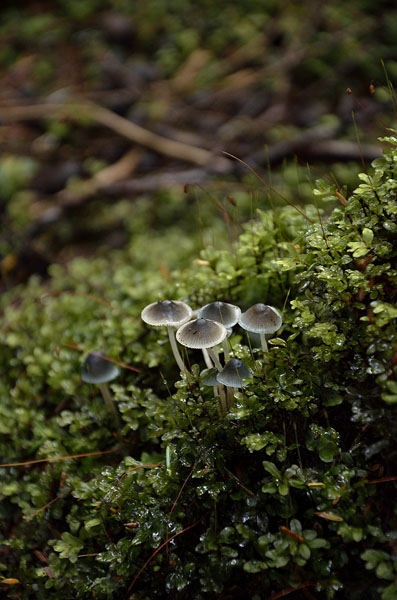 The trail led to view of Rainbow Falls at one spot, and a viewing platform overlooking the top of the falls farther along.  This late in the season after a mild winter meant that the falls weren’t roaring as much as they could be, but it was a great hike regardless. 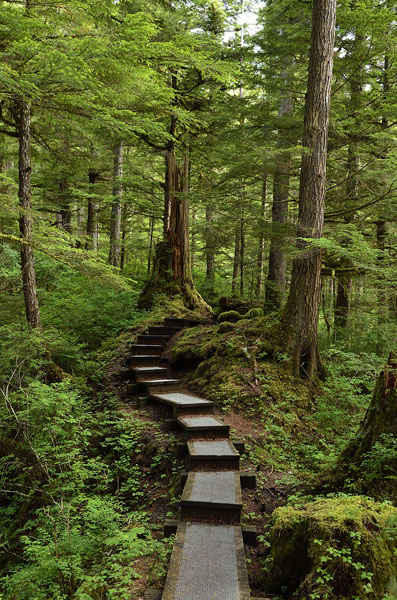 Back in town we checked out the small Totem Park, noticing frogs and beavers among the totemic symbols which we don’t usually see in totems farther north. 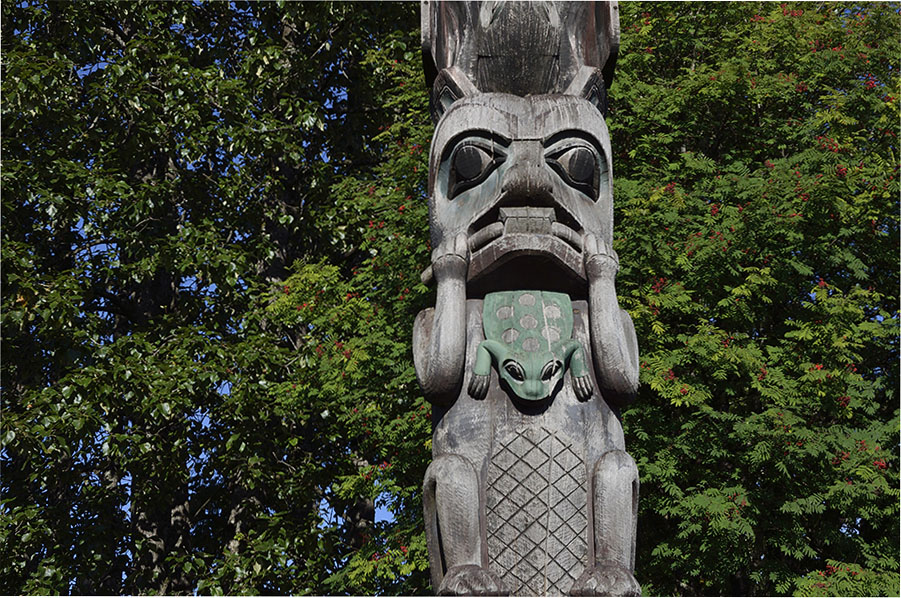 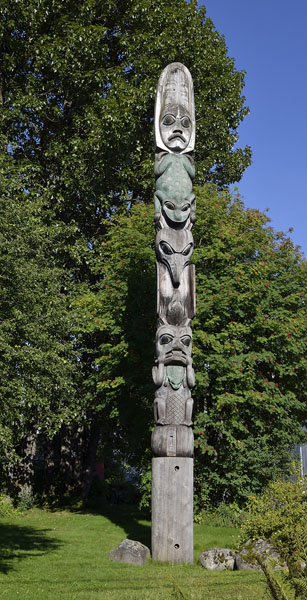 After enjoying excellent burgers at the Stikine Inn, we took our tired feet to the Petroglyph Beach to see how many we could find.  Once we spotted the first one it was easier to recognize others, many of which have been faded considerably by time and tide. 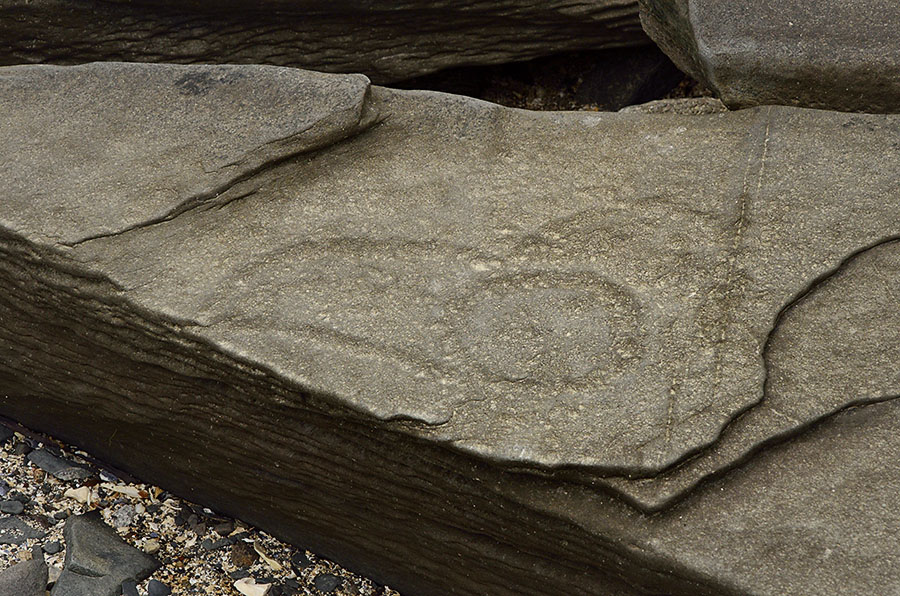 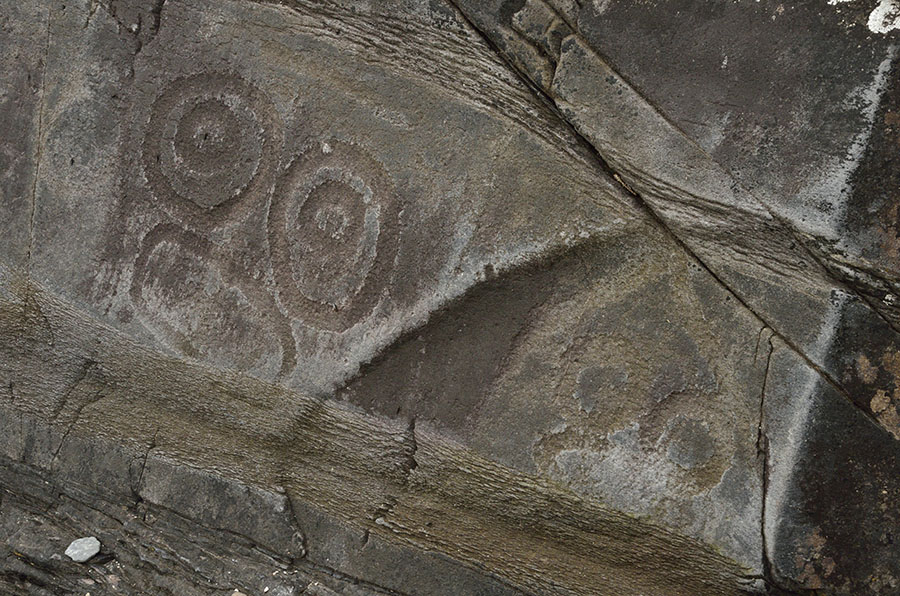 It looks like the petroglyphs were made at different times, and it’s fun to imagine the people who carved them and to guess at the messages they represent. 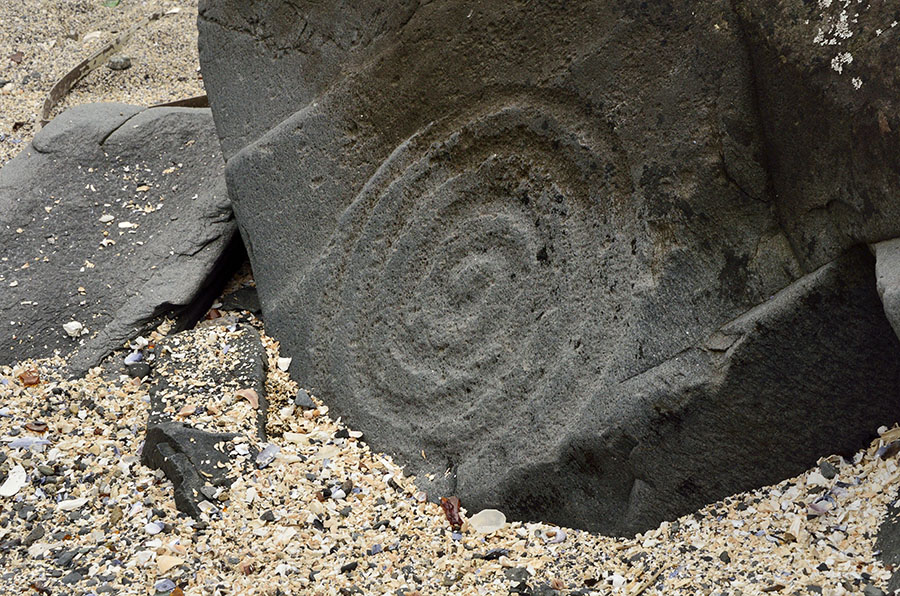 We didn’t find all 40 petroglyphs, but we did find quite a few.  Some were so faint it was hard to tell what they were anymore, but it was a neat place to explore and hopefully we can find more in other places around Southeast.  As we walked the beach we saw the Alaska State Ferry departing.  The ferry is also known as the Alaska Marine Highway since it connects the many isolated and island-based communities together.  Remember, every car that exists on these island communities got here either on the ferry or the barge. 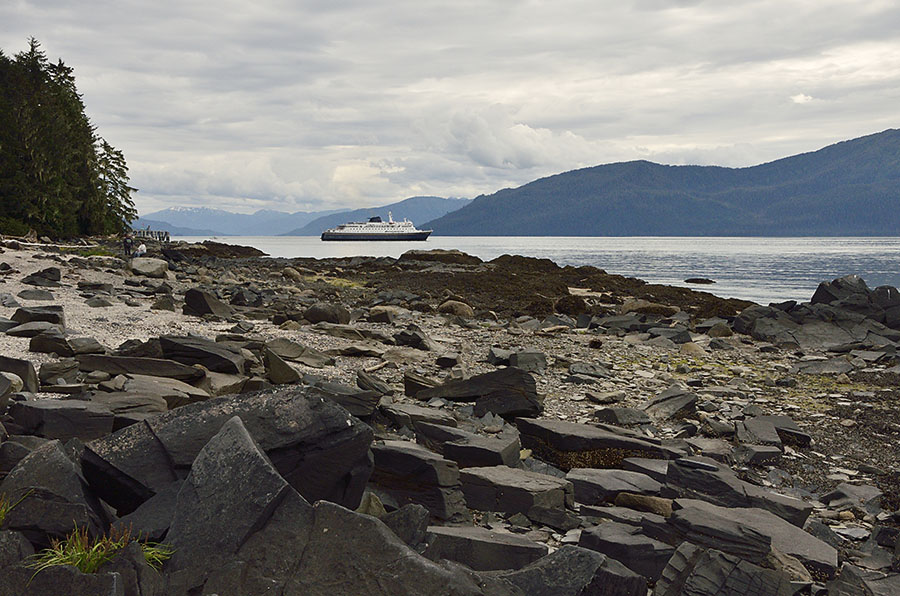