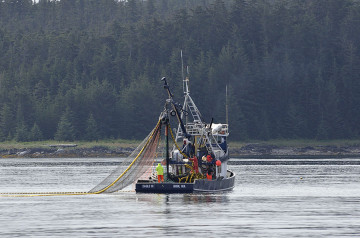 On the way to Sitka we watched the purse seiners dancing around each other, trying to find the salmon.  The fish are coming in late this season because we had an early, warm spring – so the fish stayed in deeper water to keep cool.  The fishing has been slow, but it’s starting to pick up now.  We arrived in Sitka in between openings, so the fleet was in and the docks were jammed with boats.

Sitka has 5 harbors, and it gets a cruise ship or two several days a week so the town was buzzing with activity.  We were docked at the far end of the harbor, away from town, but the extra walking was good for us. 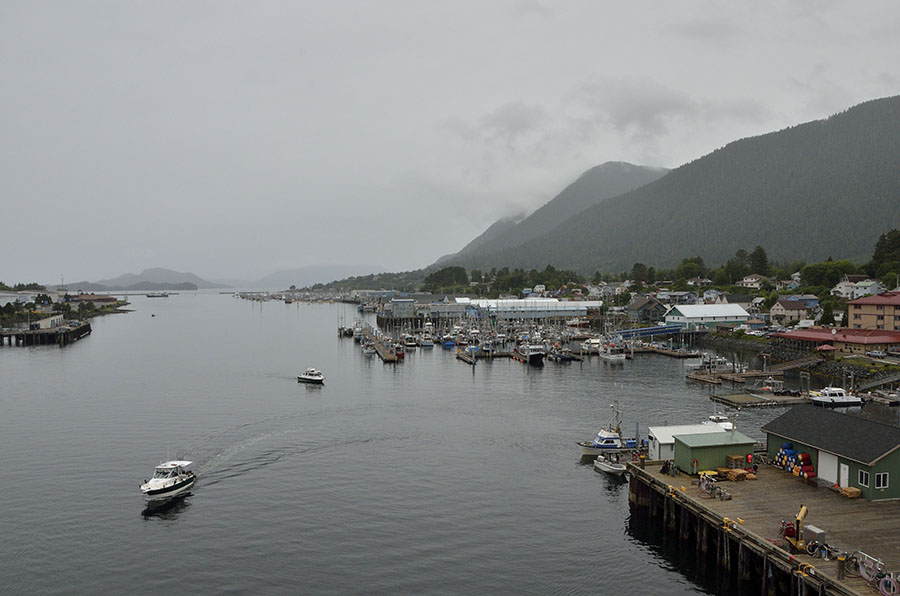 After enjoying so much sunshine over the past month, we paid the price with rainy weather and cooler temperatures – not quite the conditions we wanted for the arrival of our friends Lisa and Tom.  Fortunately they’re real troopers, and rain or no rain we set out to walk the town and take in the sights. 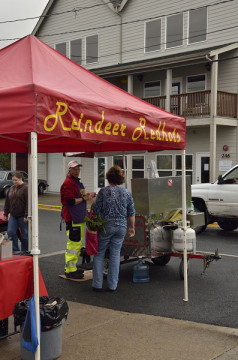 We lucked out since the farmer’s market was open and we could sample local and regional foods such as reindeer hot dogs and beach asparagus.  Rhubarb is a popular item since it grows so well in SE Alaska.  We noticed that the salmonberries were ripe and plentiful along the walkways, and we enjoyed snacking on them as we explored.  A salmonberry is similar to a raspberry with a milder flavor and an orange-y color.  Arriving in the center of downtown we looked at the Russian Orthodox church and spotted two bald eagles sitting on the cross above the church.  It’s a fun sight since the double eagle is a Russian symbol. 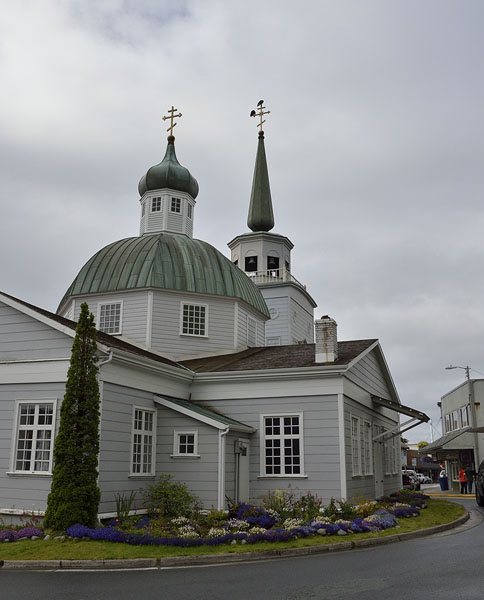 We spent the rainiest time exploring the Sheldon Jackson Museum and the new Sea Life Center, poking around a few of the shops along the way.  The second day was gloomy but not as wet so we headed up to the Alaska Raptor Center to see the work they do rehabilitating eagles and other birds.  The goal is to release birds back into the wild if possible, but the Center will give them a permanent home if they can’t live without assistance.  It’s a great chance to see these magnificent birds up close, and to learn more about them.  Some of the permanent resident birds live in enclosures in the woods, and the easy hike through the woods and the muskeg was a great first introduction to the deep greens, mosses and lichens of the northwest forest.  The bears must be happy because the many types of berry bushes were loaded! 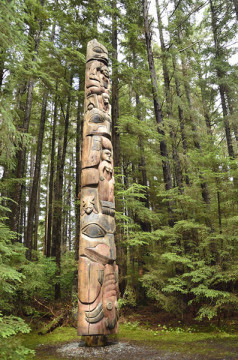 The Raptor Center was a highlight, but so was the Totem Park which we had not visited before.  We knew the Park Service had a totem collection, but we had no idea that they would be arranged in little nooks, spread throughout a lovely trail that meandered through the woods.  The totems and interpretations of their symbols were very interesting, representing styles from the three different tribes in the region: Tlingit, Haida, and Tsimshian.  Bears, beavers, eagles, ravens, wolves, frogs, orcas, and humans are all common images to find on these poles, but the arrangement and placement can have significance to either tell a story or commemorate or memorialize a person.  The totems are cared for as well as possible, but the Natives who carve them expect them to have a finite life, and they will carve other poles to replace ones that age away. 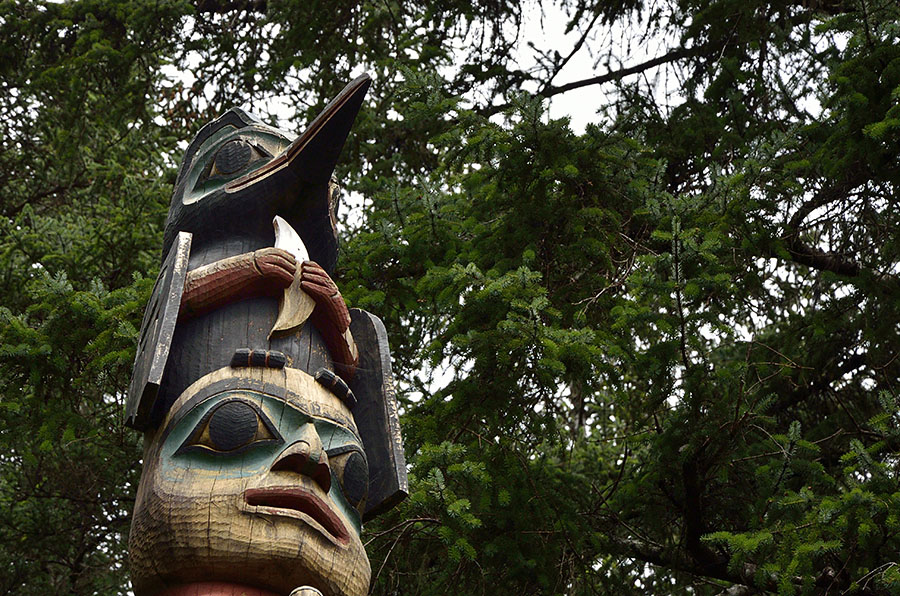 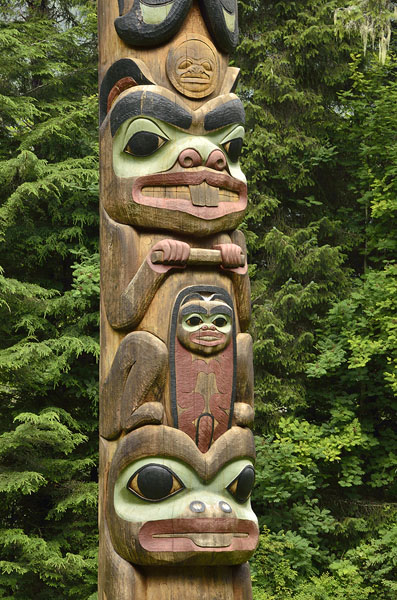 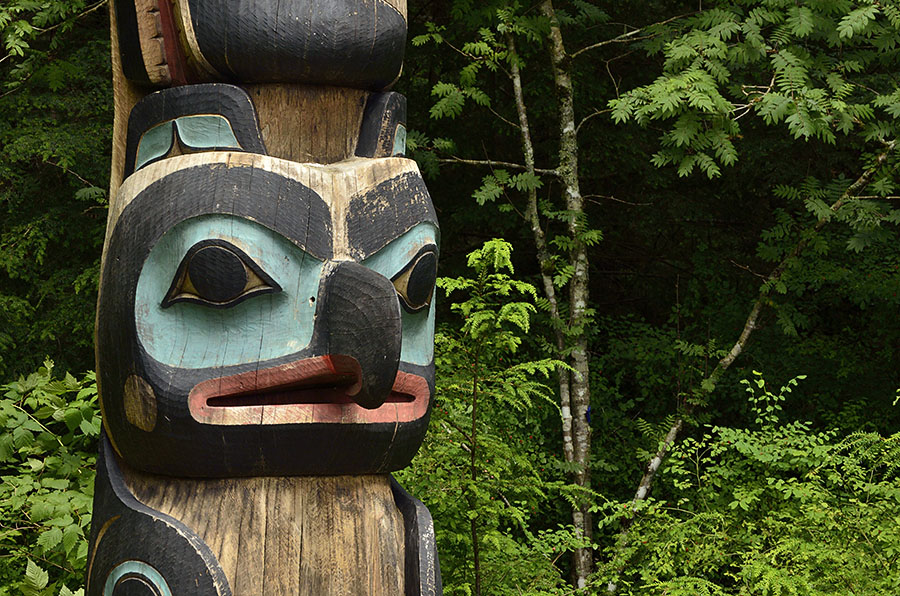 A raven, one of the Tlingit moiety symbols, flew overhead with a bit of salmon – an appropriate omen after gazing at all the totems. 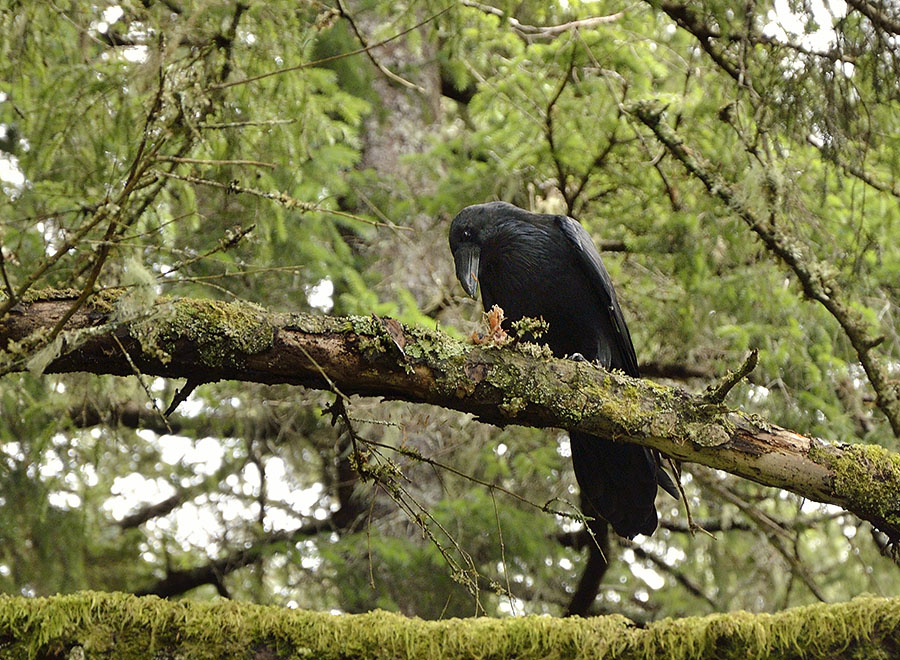 A local Tlingit lady was showing some costumes and beading techniques at the Park’s Visitor Center, and we enjoyed talking with her and learning a bit more about the meaning of various parts of their traditional dress.  It was a nice introduction to Alaska for our friends, and some new discoveries for us.