When people hear “Glacier Bay National Park” the obvious thing that comes to mind is ice, but there’s much more to it than just the glaciers.  If you’ve followed the blog for any length of time you will remember the story about the Huna Tlingit Tribal House that was dedicated last August – a significant landmark for the native people in the region as well as a celebration of the hard-won partnership between the Huna Tlingit and the Park Service.

Since last year’s dedication the carvers from Hoonah have added two new totem poles outside, to represent more clans from around the region. 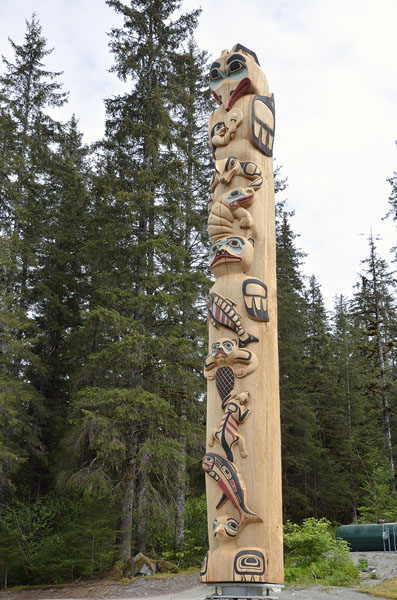 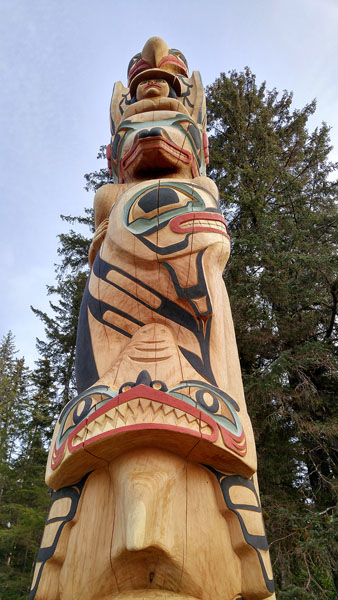 Inclusiveness is a major theme in the Tribal House carvings, including a canoe with nondescript people intended to represent all of us who come to visit, as well as the faces of ancestors in key places inside and out. 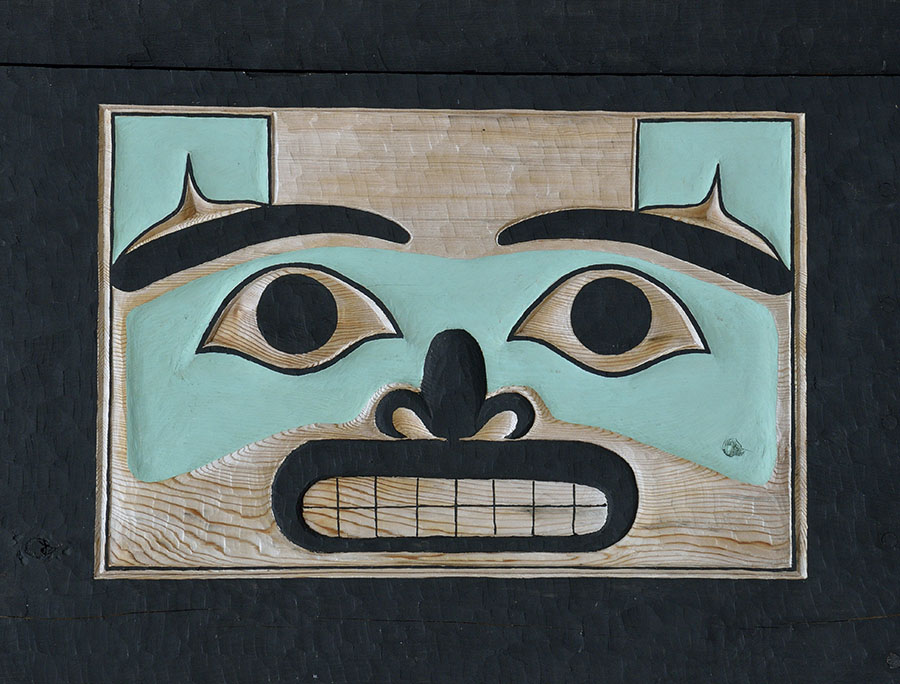 We were lucky enough to be at the Tribal House for the first every-other-Monday special program presented by some of the carvers from Hoonah – Owen and Herb, who we have gotten to know over the past several years on our many visits to Hoonah. 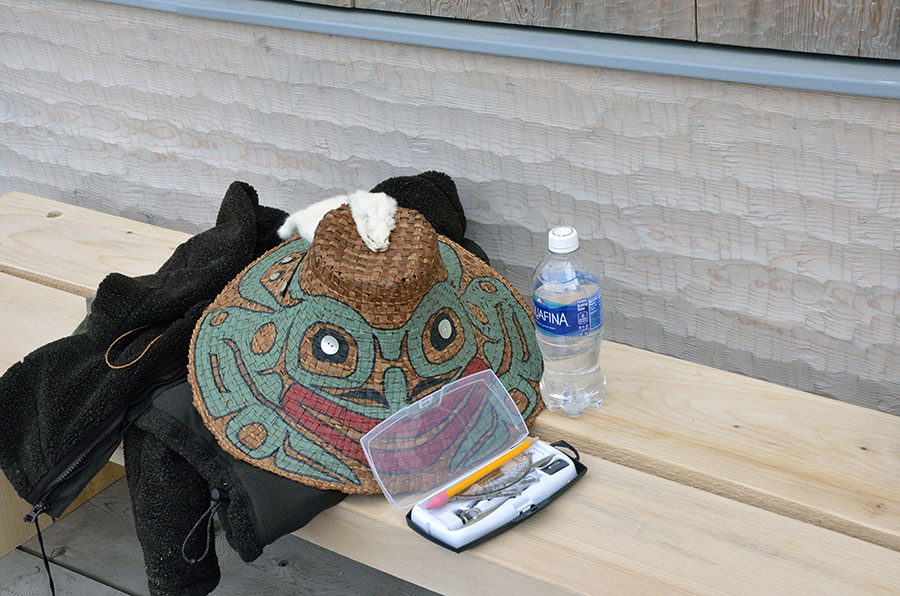 Owen was born in Petersburg and is from the Frog Clan, as you can see by his cedar bark hat.  He’s always working on something, with his sketching tools and one of his many adzes.  Note the texture on the wood wall in the photo above – it was created with an adze, and it’s amazing to learn that every board on the Tribal House, inside and out, was adzed to smooth and waterproof the wood.  It took a year and a half just for that part of the work! 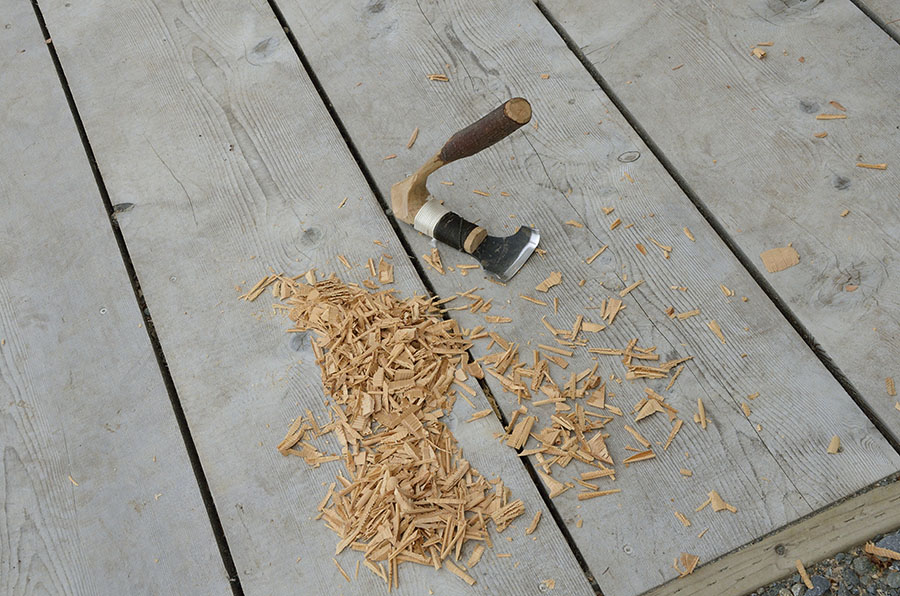 Owen and Herb gave a wonderful explanation of just some of the symbolism on the Tribal House carvings, showing us that the large face in the center inside panel represents the glacier that came down and pushed the Huna Tlingit out of the bay in the mid 1700s. 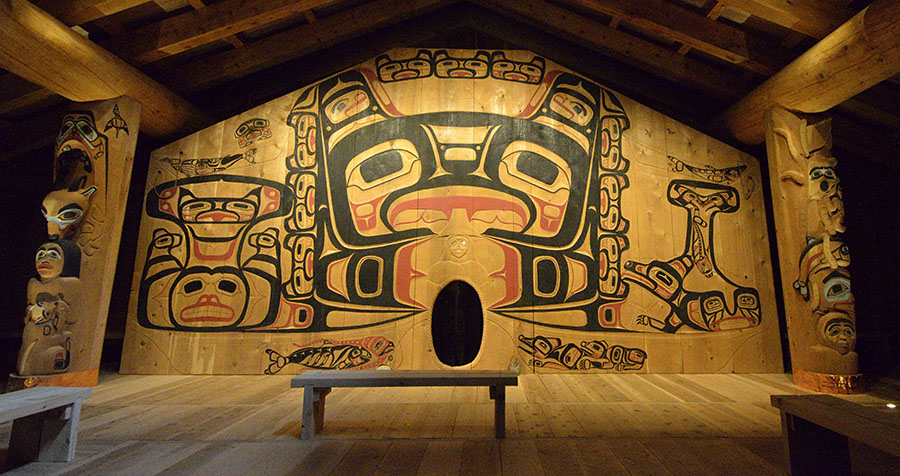 The woman in the center below the glacier was the one who is said to have taunted the glacier, encouraging it to come forward.  The abalone shell in her eyes represents the reflection of the glacier as it came bearing down on her. 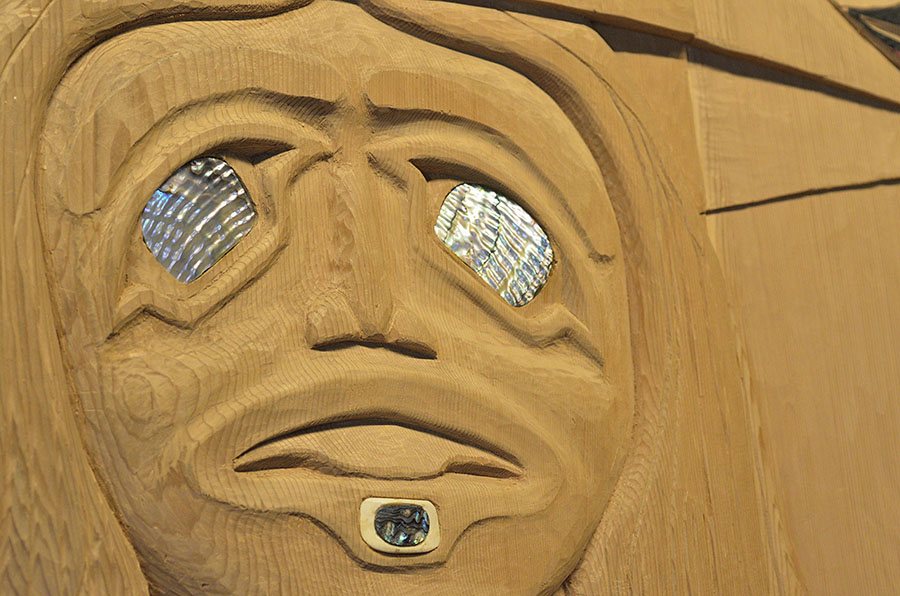 Herb and Owen donned some of their regalia and explained their clan and house symbols, and then they treated us to some drumming and dancing.  Herb danced with one of the amazing masks that he carved, and they generously shared more stories from their rich culture. 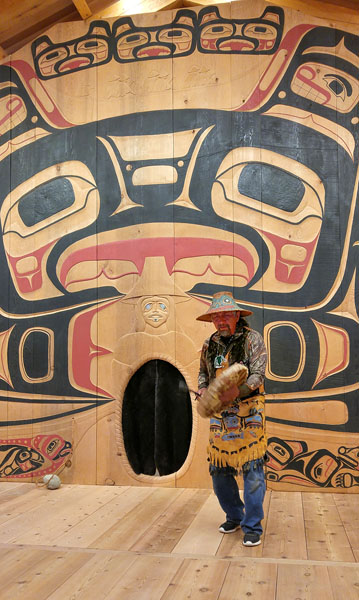 The park has hired a new interpretive ranger for the Tribal House, a Tlingit lady who grew up in Hoonah, now an anthropologist.  Her stories and explanations came straight from the heart, and we love that we’re learning more things with every visit.  The Tribal House has added a major attraction to Glacier Bay, equal to the abundant wildlife and the amazing glaciers.

Speaking of wildlife, I can’t resist getting out in the kayak whether I venture near or far.  Not far from our anchored boat I noticed a pair of eagles flapping about on a sandbar, and I was lucky enough to catch the moment of mating. 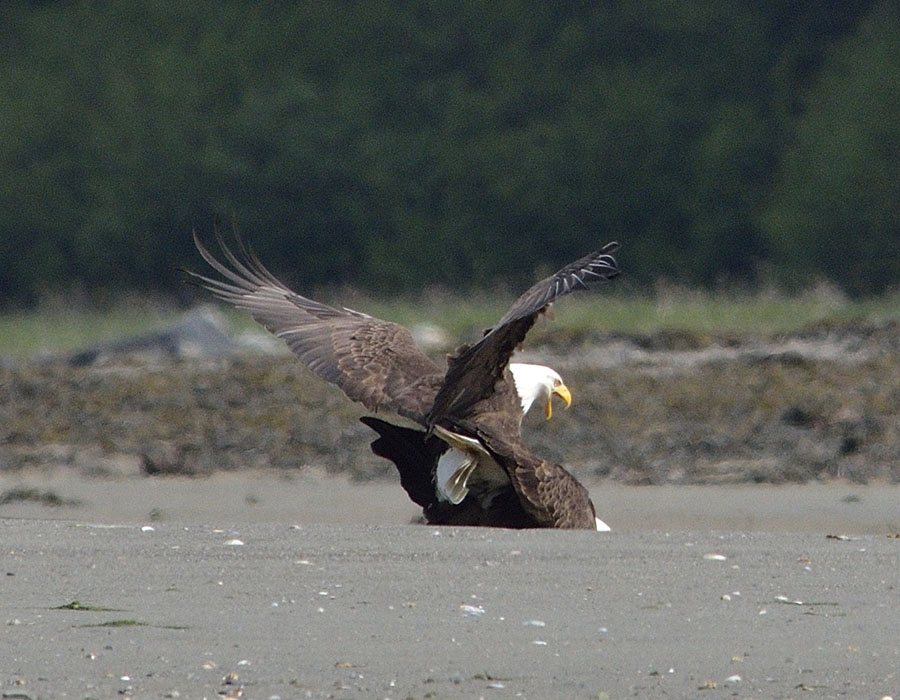 The pair stayed together for a long while afterwards, and I later found one of them perched in a nearby tree. 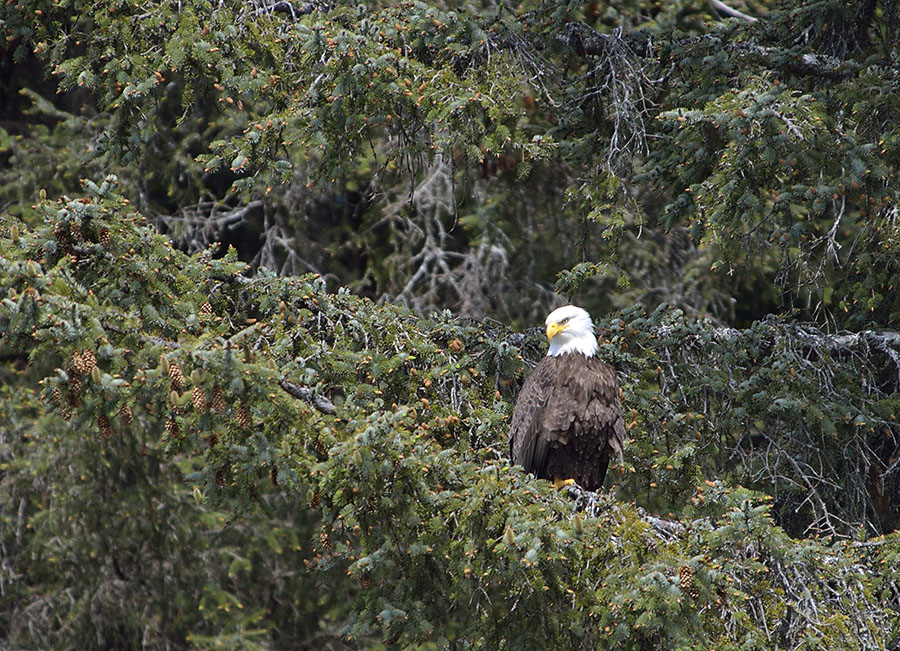 Before heading up the bay we did a little hiking, enjoying the signs of spring slowly turning into summer, with flowers like these shooting stars blooming… 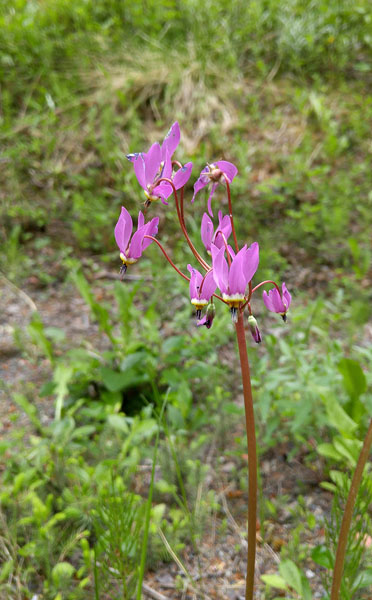 …though the lupine was only just beginning to open up… 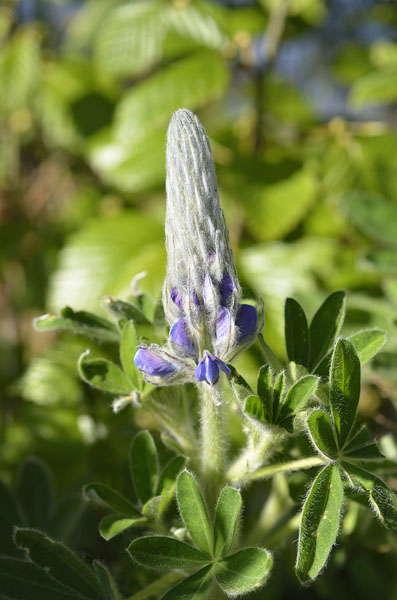 …and the salmon berries have a long way to go before they become a delicious treat for people and bears. 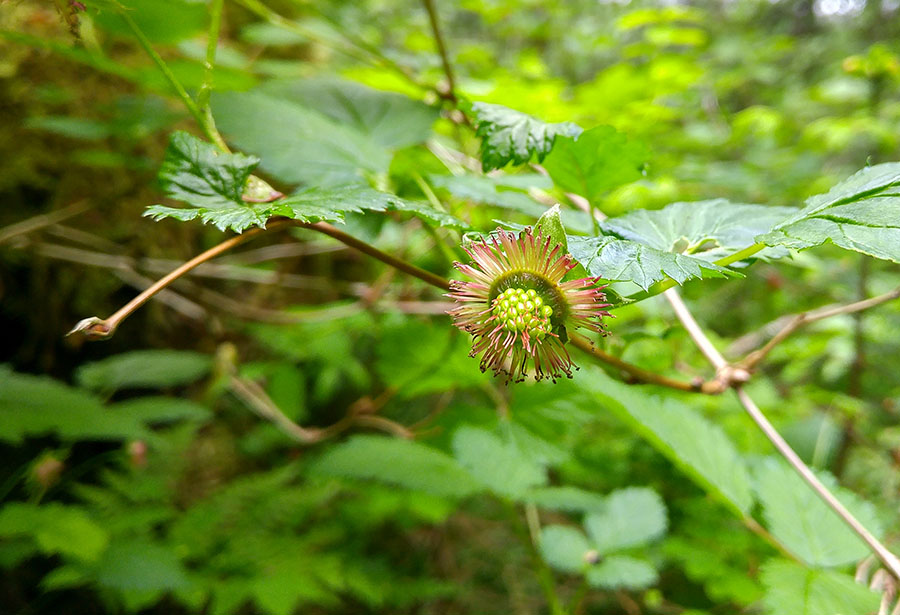 There’s just something special about a walk in the woods. 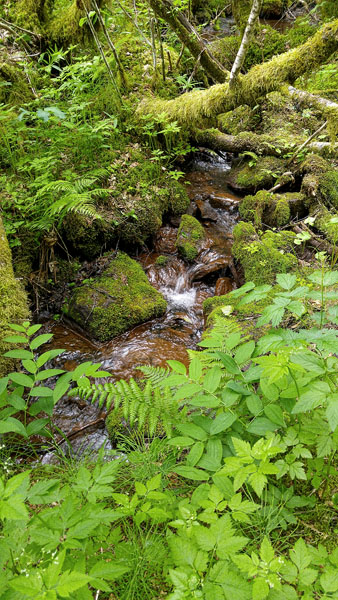