The 528 square miles of Canyonlands National Park is divided into four distinct districts: Island in the Sky, the Needles, the Maze, and the Rivers – the Colorado and Green Rivers that wind through the park and helped shape the land.  Island in the Sky is closest to the town of Moab and Arches National Park, so it’s the most visited part of Canyonlands.  Entrance to the Needles district is about 100 miles to the south, and the Maze district entrance is around to the west, accessible only by 4 wheel drive and backcountry hiking.  We’ve been to the overlook at Dead Horse Point State Park near Moab several times to look down into this part of Canyonlands, but we were anxious to explore at least the Island in the Sky district a little more closely.  Here’s a map to help you see where things are in relation to Las Vegas and Salt Lake City, and so you can see how close Arches and Canyonlands are to each other. 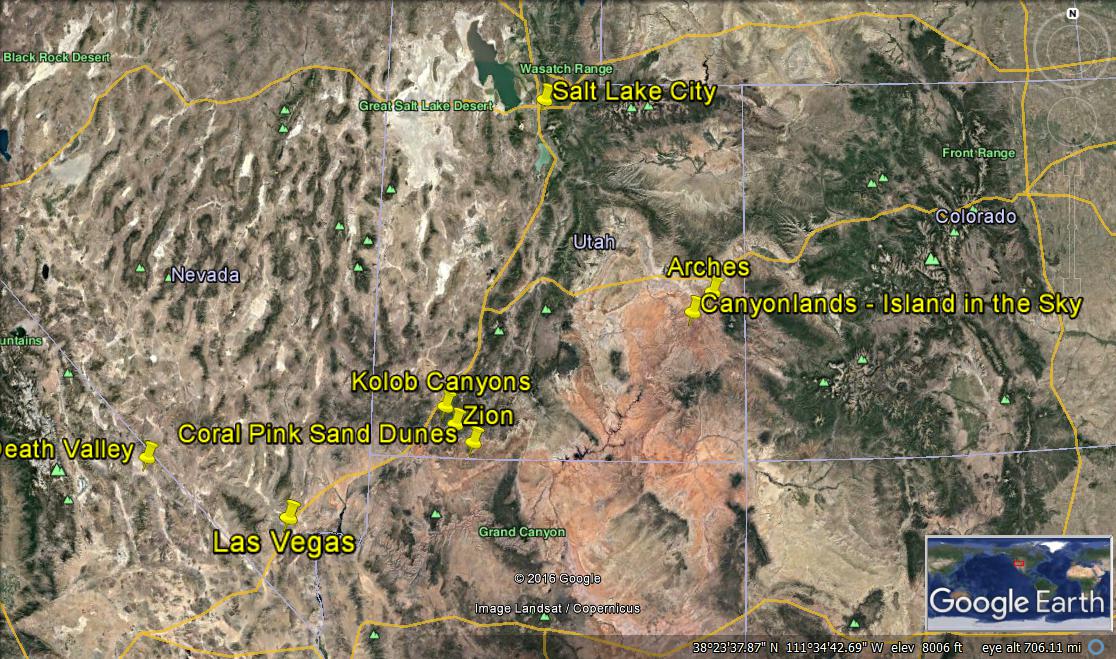 Island in the Sky is a flat mesa at an altitude of 5900′ on the Colorado Plateau, 2200′ above the Colorado and Green Rivers.  Sheer cliffs drop 1200′ to a plateau topped by white sandstone carved by the mighty rivers another 1000′ below. 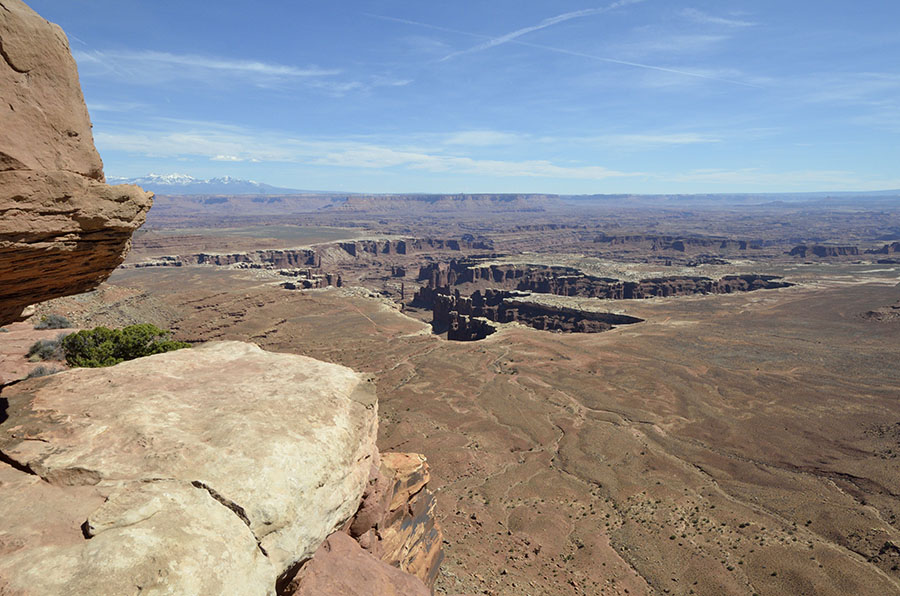 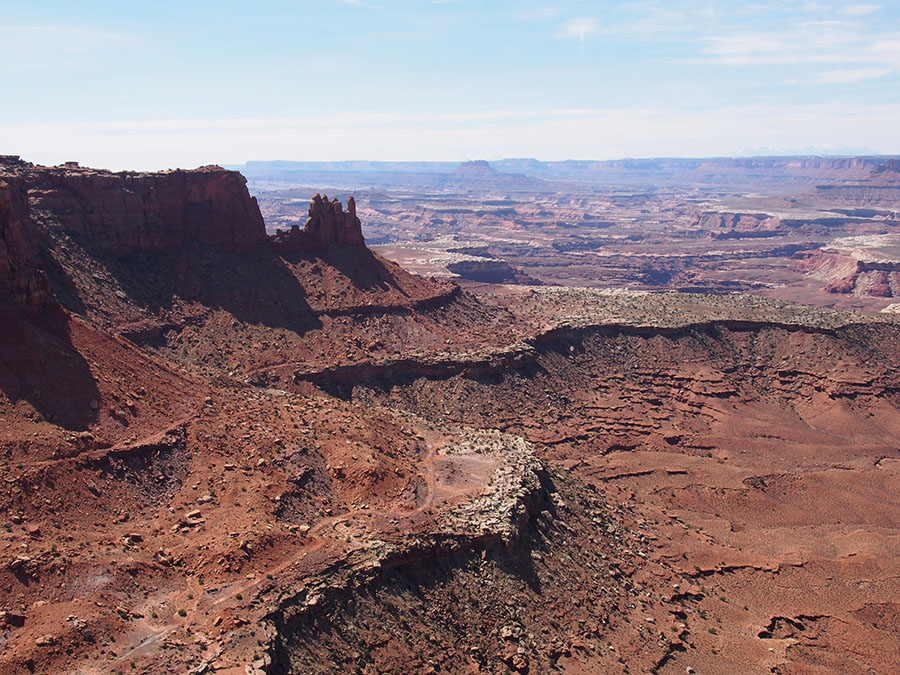 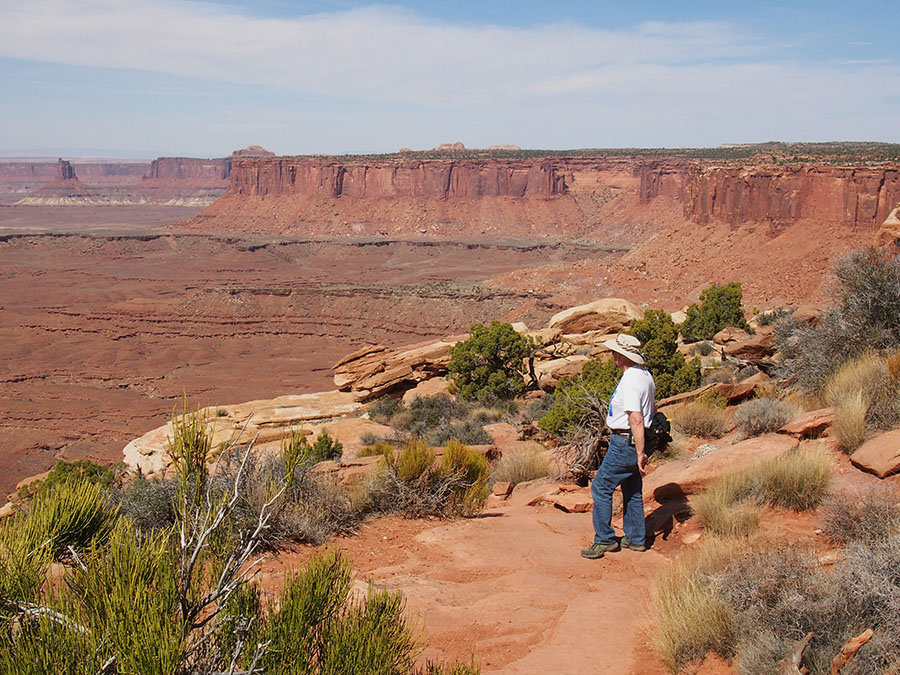 Monuments, buttes, spires, fins and arches are all found in this improbable landscape, though so much of the park is very difficult to access.  The sweeping views from the rim of the Island mesa are breathtaking, and there were several shorter hikes that we took to see some of the highlights, such as the Mesa Arch… 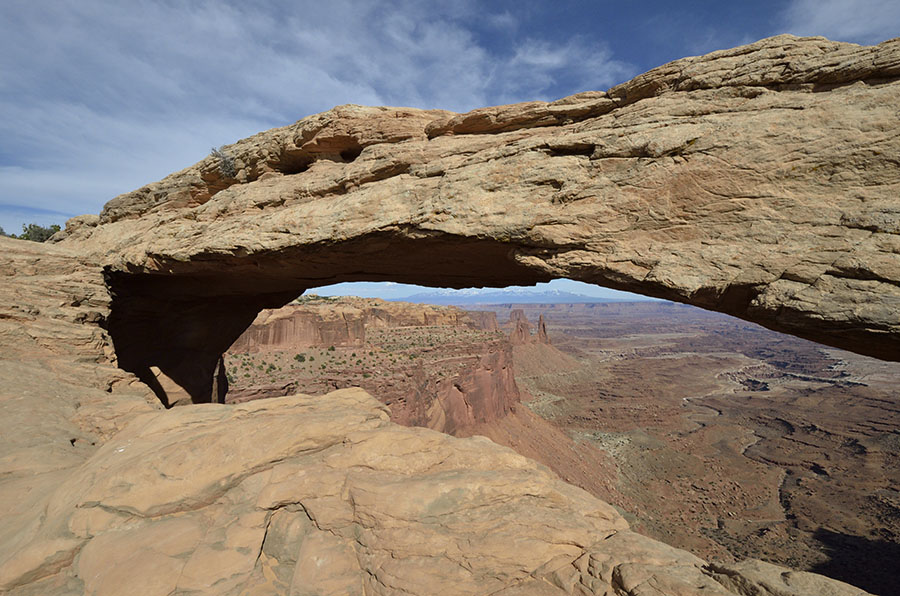 …and the Grand Overlook… 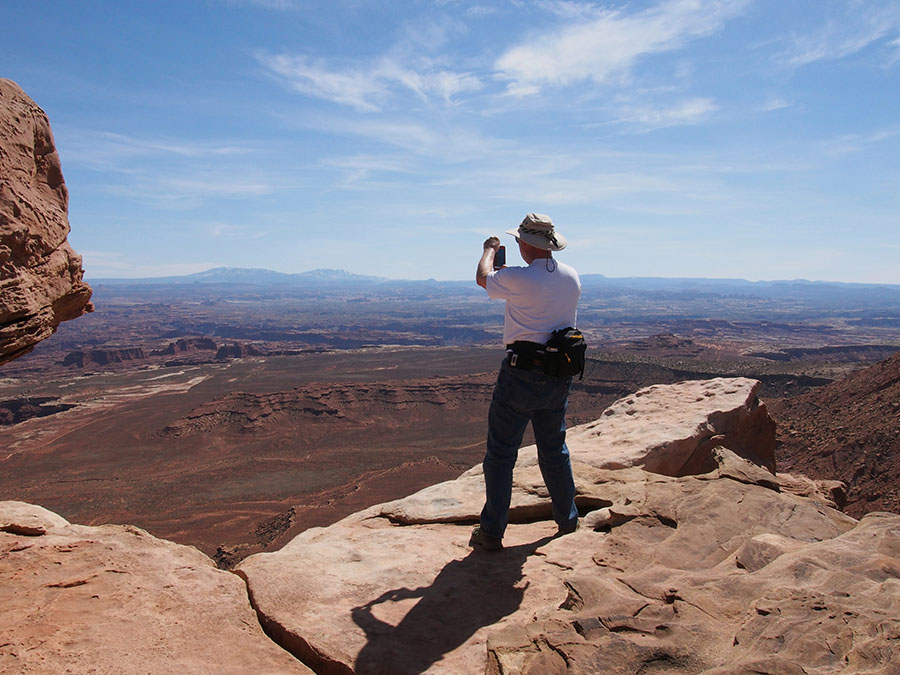 …and the Upheaval Crater – which has two possible theories about its creation, but no one can agree… 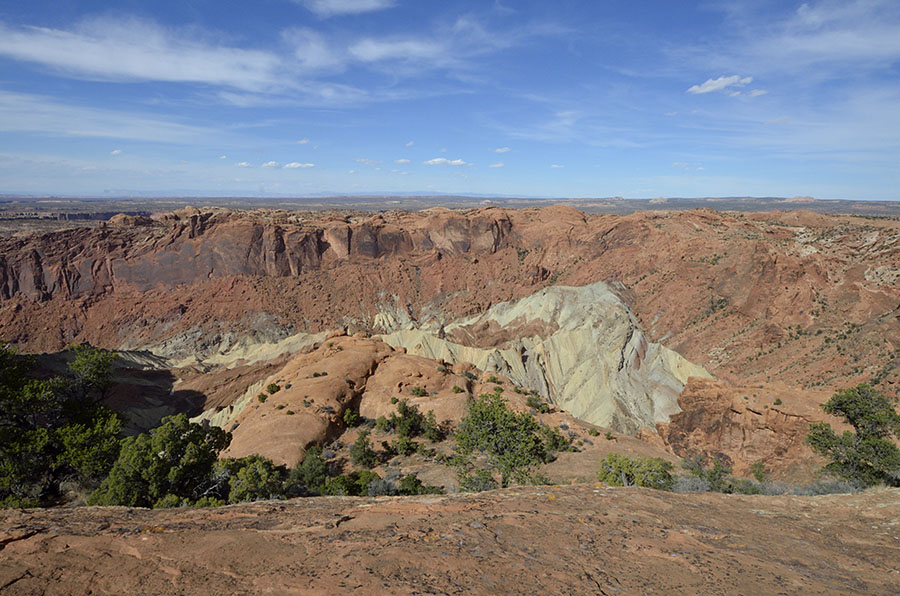 …but we wanted to see more.  The rangers told us that we would be able to negotiate a short section of the famed White Rim Trail (1200′ below the mesa top) in our long 4 wheel drive truck, and that we should be able to ascend the steep switchbacks of the Shafer Trail to get back up on top.  Armed with a backcountry permit and the ranger’s assurances, we set out for a day trip onto the lower rim.

From the town of Moab we picked up the Potash Road on the north side of the Colorado River, traveling along a dirt road that slowly climbed higher to give us nice views of the river’s muddy flow. 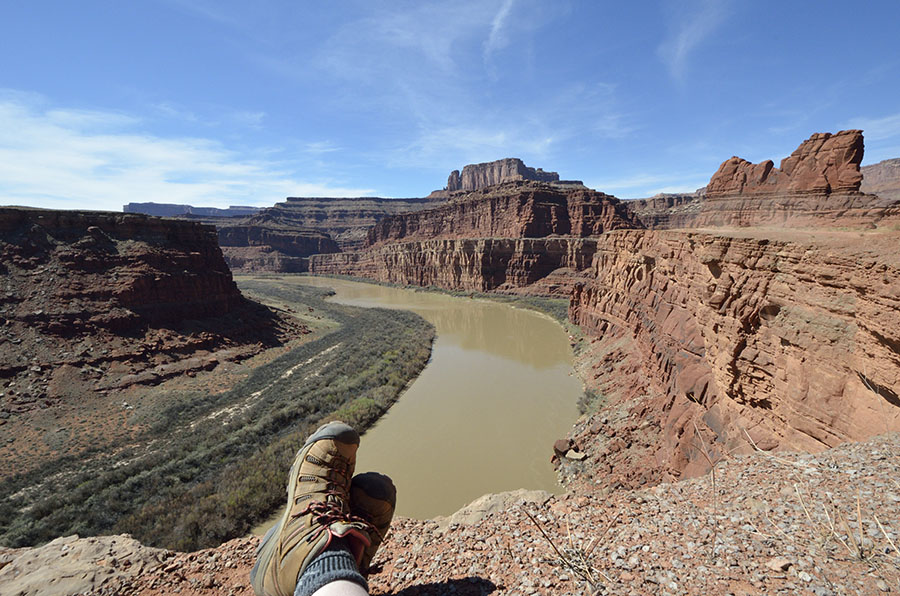 The road leads past potash (potassium salts used primarily in fertilizers) drying pools and railroad sidings, a reminder that this area has a great deal of mining (including uranium) in its history.  The 4 wheel drive trails in this area are outside the park boundary and are popular with OHVs – Off Highway Vehicles with beefy suspensions and big tires that can tackle the rough terrain with impunity.  We were jealous at how easily they zipped along, but going slow gave us more time to appreciate the magical scenery. 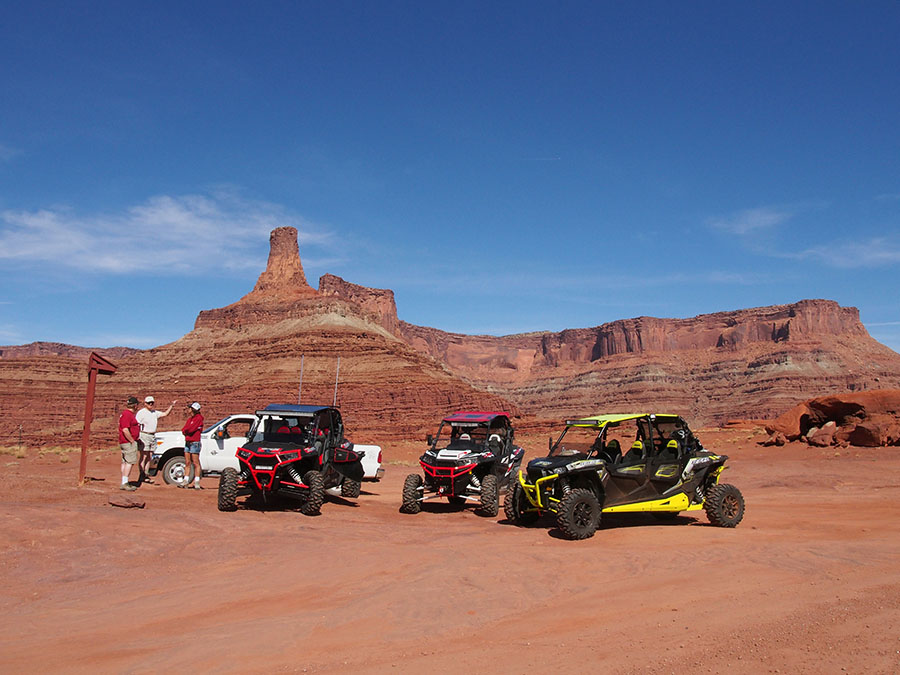 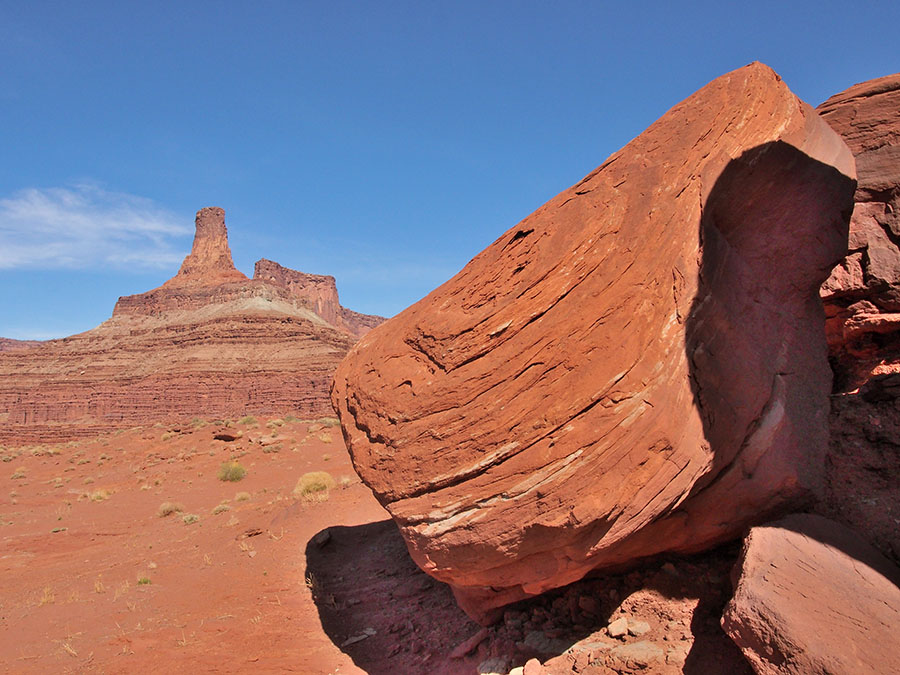 We reached the lower entry (a cattle gate with a sign) to Canyonlands, and connected with the White Rim Trail – for mountain bikes or sturdy 4 wheel drive vehicles only.  It takes 2-3 days to traverse the entire 100 miles of the trail in a 4 wheel drive, and several more days to do it on mountain bikes.  We took the ranger’s advice and only traveled about 15 miles to the Musselman Arch – by then we were ready to turn back.  The road hugs the rim of white sandstone, and there were limited places where we could pull off to the side to allow other trucks or mountain bikes to pass.

Whew!  Now we just had to get out of the canyon and we had two choices: return on the long rough dirt road back the way we came, or take the shorter, scenic, challenging Shafer Trail that climbs 1200′ to the top of the mesa. 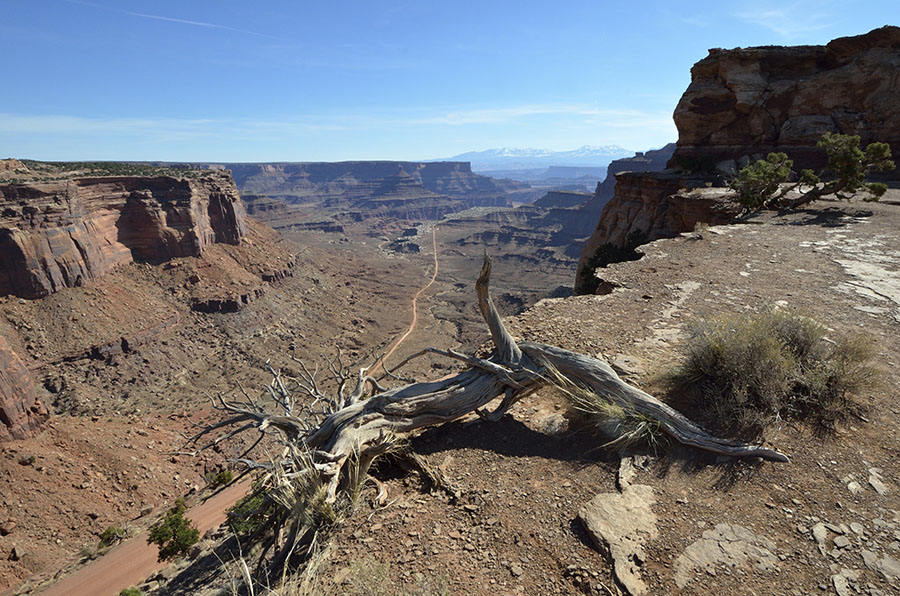 That tan line in the middle of the photo above is the beginning of the Shafer – the easy part.  The photo below shows some of the switchbacks on the not-so-easy part. 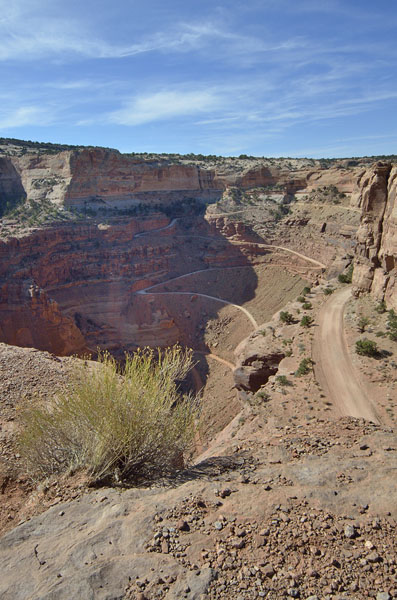 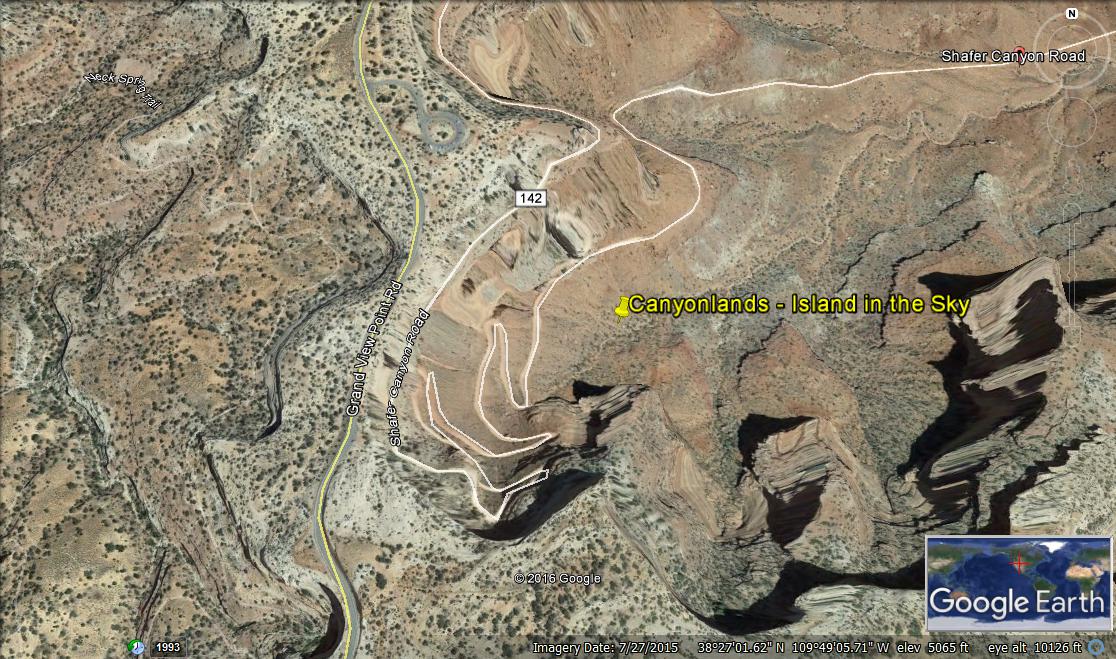 The challenge with the switchbacks is that our 21′ long truck was a little too long to make the sharp turns, and the road is narrow, dirt, and it has no guardrails.  Jim had to drive up and almost kiss the cliff face, then back up a few feet in order to make each tight turn.  I really didn’t like the backing up part!  Passing another vehicle is something you’d like to avoid, but it happens.  You just have to choose a spot that feels wider and pull the side mirrors in.  Next time, maybe we’ll rent a small jeep.  But it was an adventure, we had a great time… and I had a big glass of wine when we got back to the camper.  We loved what we saw of Canyonlands, and we hope to explore more of it on another trip.

Here’s a little video that Jim shot with a camera mounted on the dashboard.  The switchback section has been sped up to 4x normal speed – we took it slow and easy in real life.

2 thoughts on “Island in the Sky”