Many of you have probably heard of Sitka – it’s located on the western side of Baranof Island.  What you may not know is that the eastern side of Baranof is known as the “waterfall coast”, with countless waterfalls at every turn: tall ones, short ones, wide ones, and silvery little ribbons.

We tucked into Ell Cove (Lat/Lon: 57 11.93 N / 134 50.98 W) to explore a new place, and loved the cozy protection this L-shaped pocket provided.  We were graced with beautiful weather, and flat seas out in Chatham Strait. 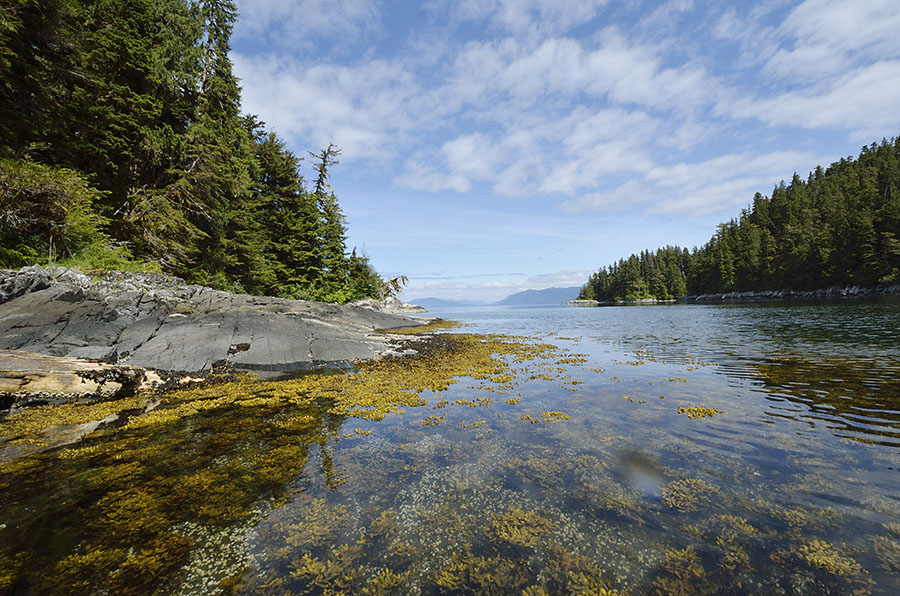 Of course the kayak hit the water the minute our anchor was set, and with the benign conditions outside the cove I could check out the rocky shoreline and little patches of white sandy beach.  Just to the north I played in the rushing creek from one waterfall, and just to the south I had a view of the dramatic Kasnyku Falls (located in the aptly named Waterfall Cove). 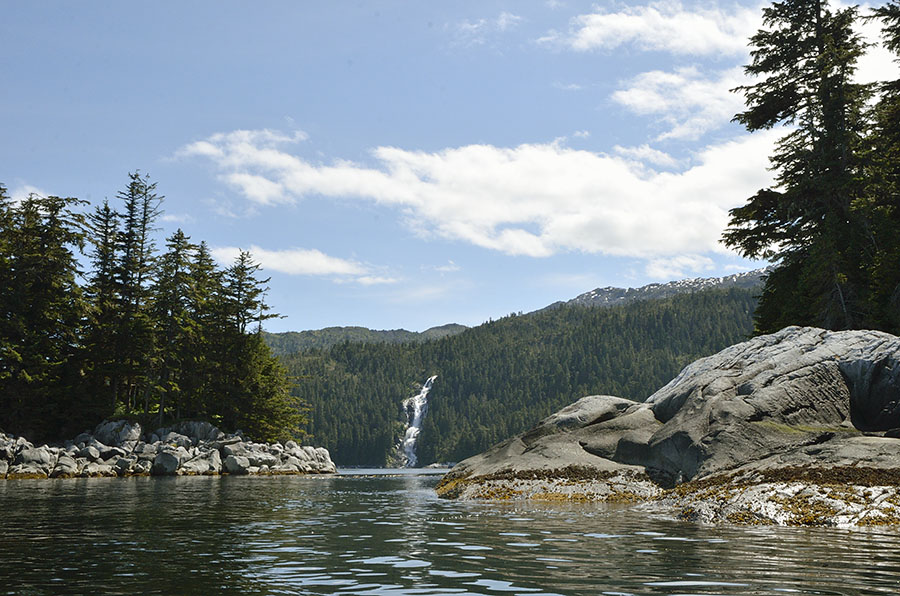 Kasnyku Falls drops over 400′ from a mountain lake, and it’s hard to grasp the scale of it without some point of reference.  Jim graciously volunteered to climb ashore and pose next to the falls for me, which was especially brave since we spotted a brown bear and two small cubs on the left side of the falls as we approached.  The bears moved into the woods when they spotted us and I dropped Jim ashore on the opposite side, but the falls were roaring so loudly that his clapping and “hey bear!” announcements were almost impossible to hear… we both kept a sharp lookout. 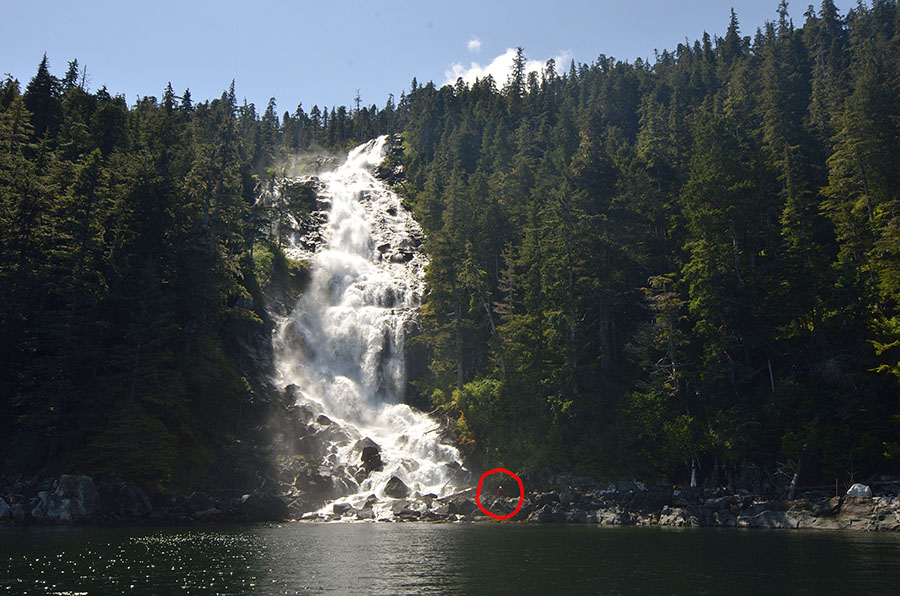 There’s brave Jim – circled in red.  He’s such a good sport about photo-ops.

While exploring with the dinghy we spotted about half a dozen purse seiners fishing for salmon, and at least two of the boats closest to us were Petersburg boats.  It was a treat to float near the seiners and watch the beautiful ODIN working up close. 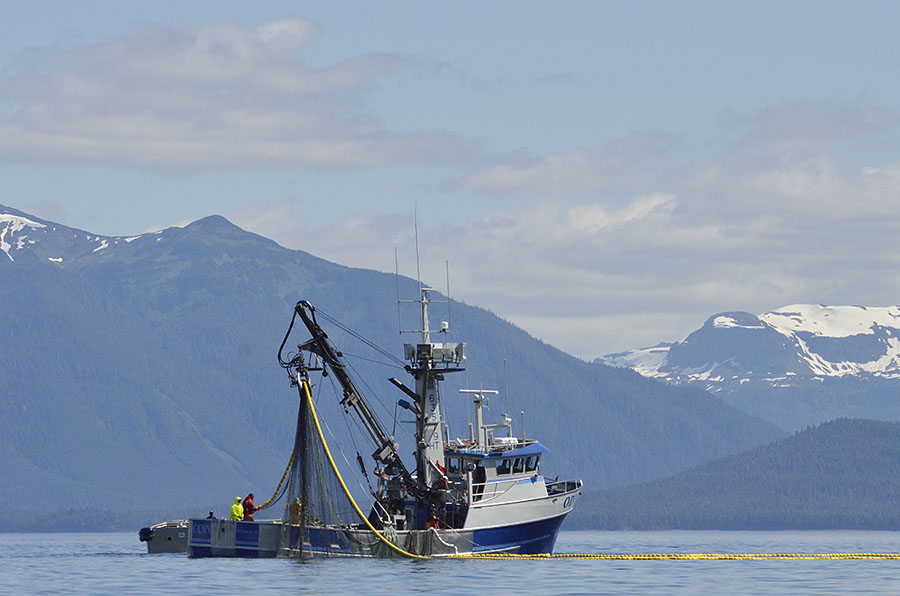 The purse seine is a net about 1200′ long that hangs approximately 40′ down and is drawn out from the boat by a powerful seine skiff.  (A brand new seine skiff like the one shown below can cost over $200,000.) 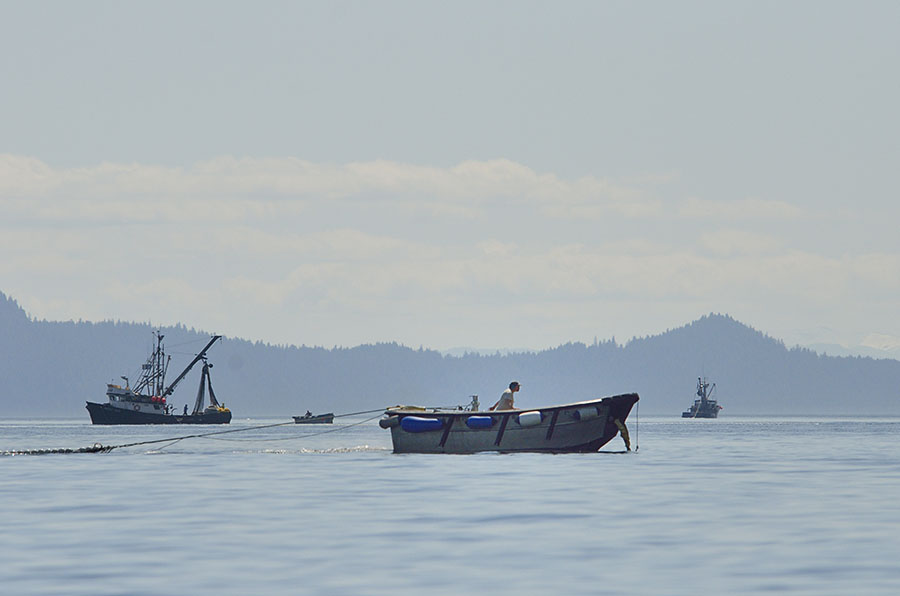 Once the net is fully deployed, the skiff and the main boat work together to draw the net around in a circle to enclose the fish, and at the same time they draw the bottom of the net closed – forming the “purse”.  The seiner begins to raise the net, and the skiff moves around to the far side of the seiner to provide some pull and counter-balance.  If the net is very full of fish the seiner could topple over without some help from the skiff. 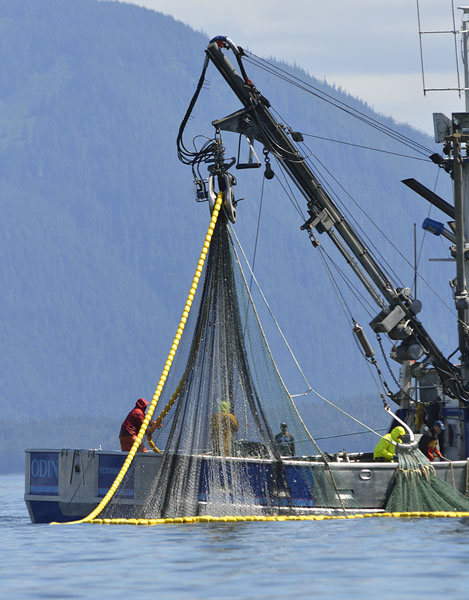 Fishing is challenging, working in all weather conditions day or night but it also requires a great deal of knowledge and expertise in so many areas:  biology, oceanography, meteorology, mechanics, navigation, business, finance, and mastery of complex regulations.  Each successful purse seiner like the ODIN represents a multi-million dollar business, and we have many of them here in Petersburg.

We resumed our explorations with the dinghy, heading to spots I found earlier by kayak.  With such large tides (16-20′) it’s important to choose the timing and location to beach the dinghy so it’s not left high and dry by a falling tide.  Our dinghy weighs almost 600 lbs. so we would have to wait many hours (like a pair of “bear snacks”) for the tide to rise if we aren’t careful. 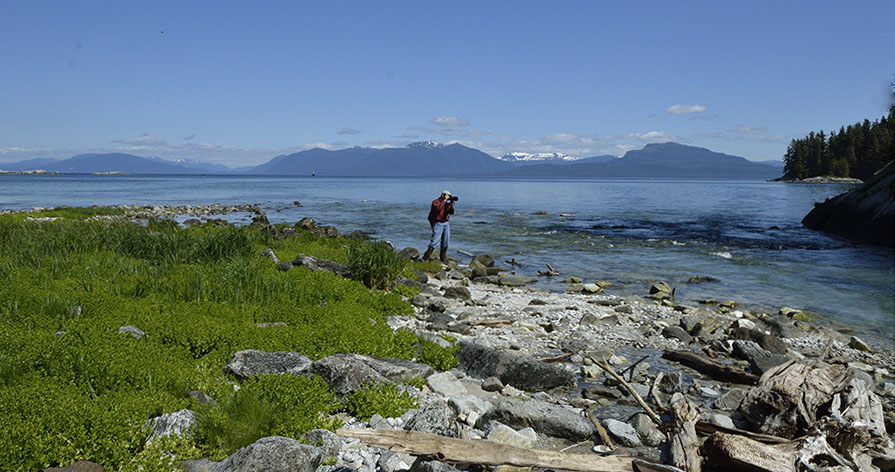 We climbed around the small waterfall creek, wading into the icy cold water to pick up shells and pretty rocks.  (I refuse to admit how many rocks I have stashed aboard this boat.)

I ventured out in the kayak again, playing in the current near some bull kelp watching the long fronds swirl in the flowing water. 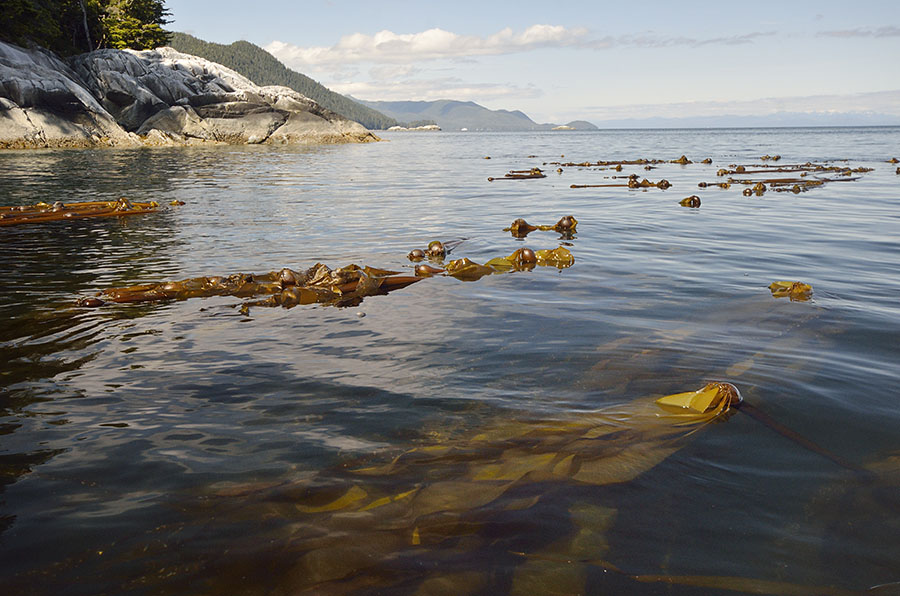 A little seal popped up to spy on me – they are very shy but also very curious.  I sat still to watch him – he would dive and vanish for a few minutes and then reappear closer each time. 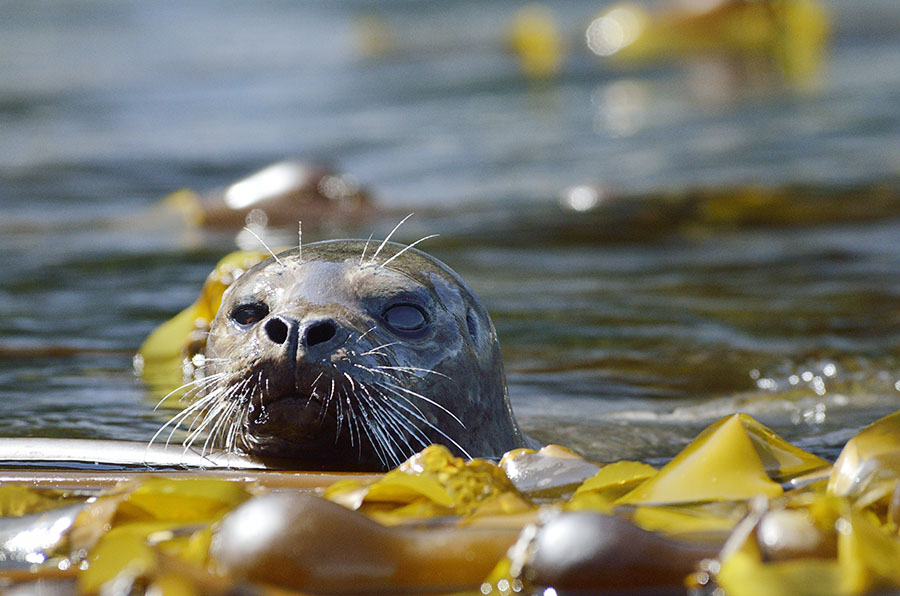 We spotted a few deer on the shore, noticing that this one still hadn’t lost all his winter coat.  It’s interesting to see the difference between the brown-gray winter coat and the brighter orange-y summer one. 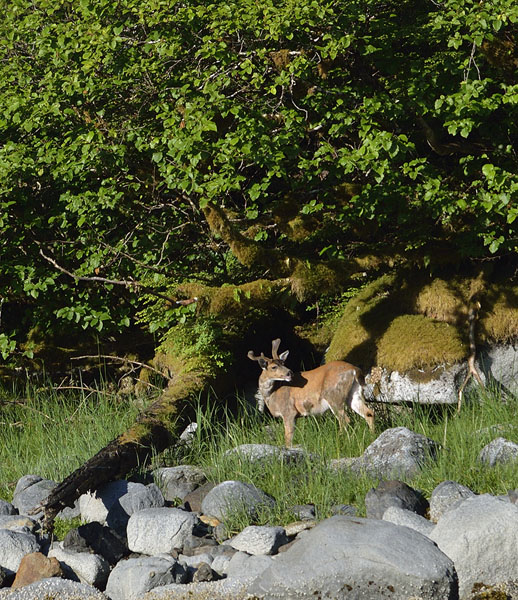 We loved Ell Cove but it was time to move on just a few miles farther south along the waterfall coast to Takatz Bay (Lat/Lon: 57 08.01 N / 134 51.39 W) – a large protected bowl surrounded by tall mountains.  The reflection in the early morning calm is magical. 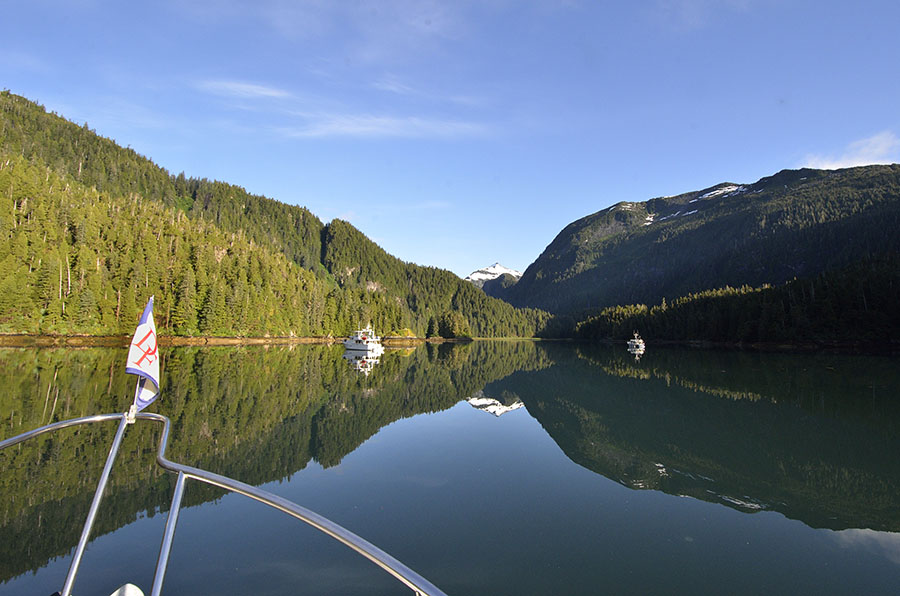 Despite the mountains and the lack of any nearby civilization, we can get some decent Internet and voice signal in Takatz Bay so we were able to secure a permit to see the Tlingit Tribal House dedication in Glacier Bay in late August.  I also love some of the smaller waterfalls, experimenting with long exposures of the rushing water. 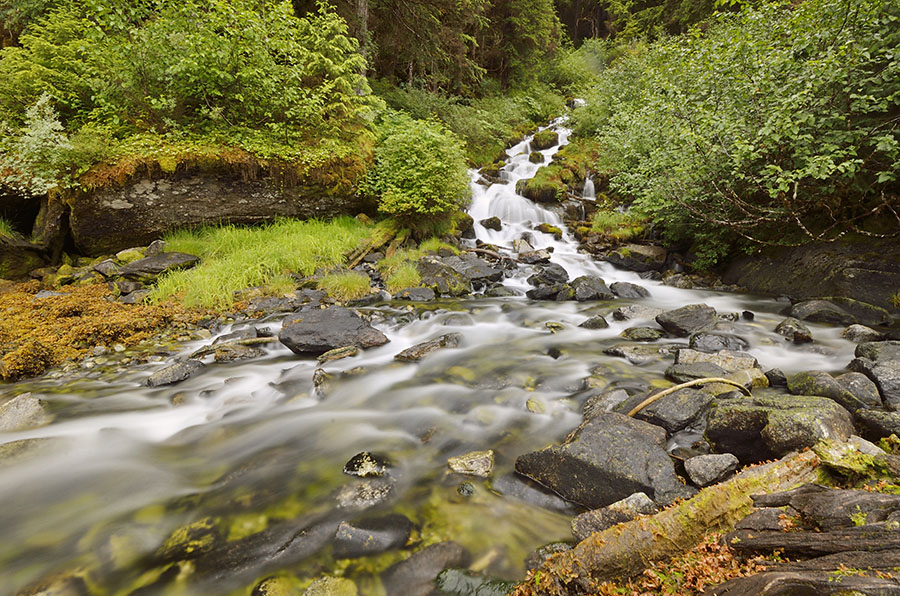