I’m finding Alaska to be very frustrating as a photographer – there doesn’t seem to be a good way to capture the “big-ness”  or the details of the landscape in a photograph.  Red Bluff Bay is a great example – there’s a huge roaring waterfall, a large “bear meadow”, snow-capped mountains in the background, and a massive granite bowl with little silvery ribbons of waterfalls across its face.  It is breathtakingly beautiful. 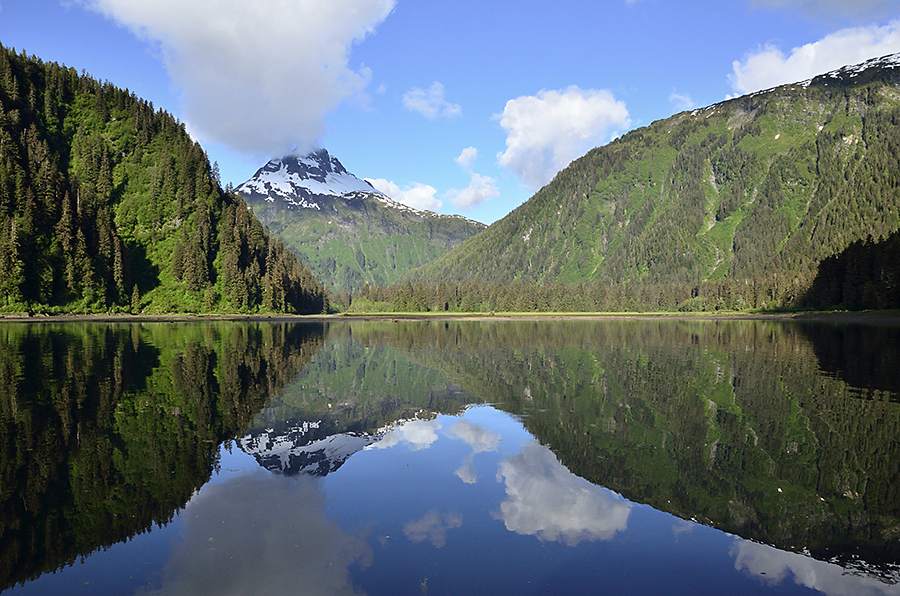 The picture can’t even come close, and of course it doesn’t convey the sounds of the birds or the chill of the wind that funnels down the waterfalls. 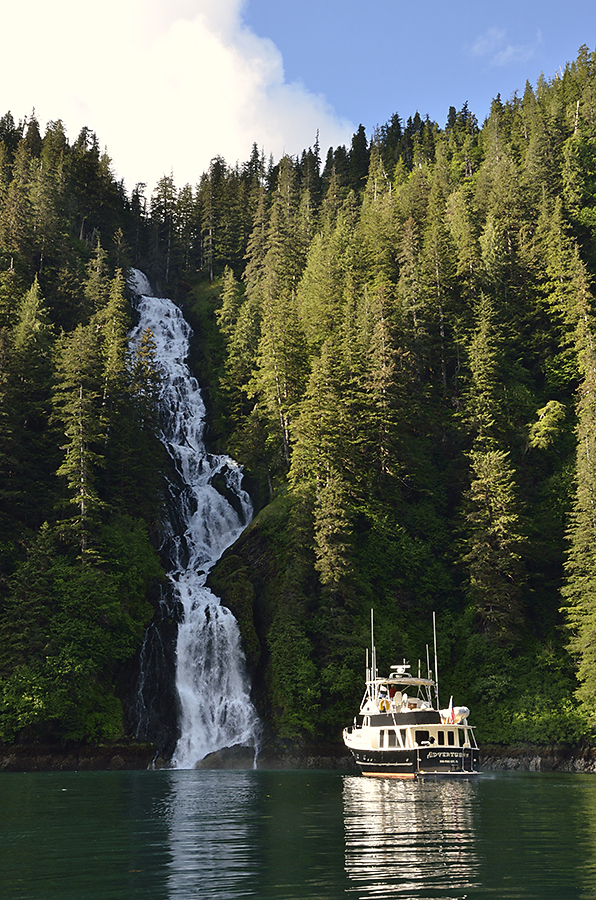 We read that at high tide the creek was passable up to a lake so we headed out in the dinghy.  As we were slowly (and carefully – it’s a shallow creek) making our way up, we noticed a brown bear munching the tall grass near the shore.  He glanced at us now and then, but kept on munching so we gradually eased closer towards the shore.  After a little while the bear gave us a steady look, so we backed off and gave him more space. 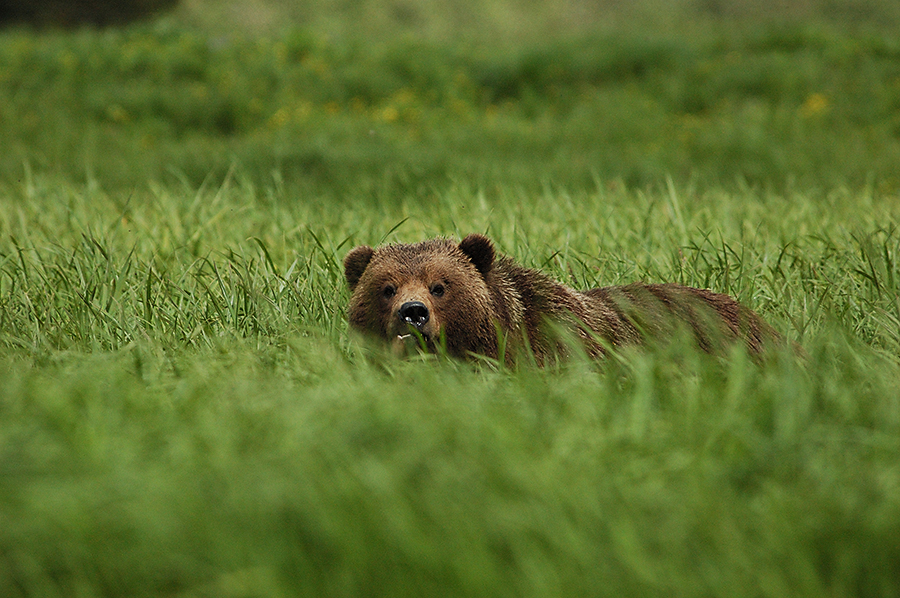 Later on we were talking with the captain of one of the charter boats and he said that the bear’s stare meant that we were making him nervous, and that the bear’s next move would have been to run away if we hadn’t backed off.  They are amazing creatures to watch.  We had another good show while we were fixing dinner – this time we saw a Sitka black-tailed deer on the shore of the meadow, and he noticed a brown bear come out of the forest and amble along the shoreline.  We watched them for about 15 minutes, the bear sniffing the air now and then, and the deer keeping a sharp eye on the bear.  Eventually they all trotted off into the woods and we were able to finish cooking. 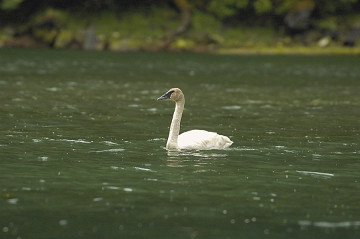 There was plenty of other wildlife in the bay to keep us entertained – a trumpeter swan, river otter, seals chasing schools of herring in our little cove, mergansers, harlequin ducks, eagles and ravens twirling in the sky… a fairly typical day in SE Alaska, I think.

With so many bays and coves to explore, we had to force 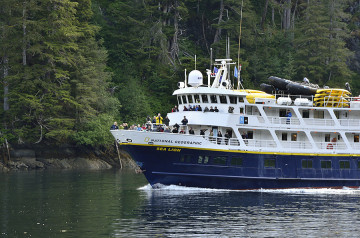 Our next stop was Warm Springs Bay, also on the east side of Baranof Island.  There is a public float and a handful of houses, part of the Borough of Sitka (13 miles away, on the other side of a 4000′ mountain).  The interesting features are the roaring waterfall, lake full of cutthroat trout, a river, and geothermal hot springs. 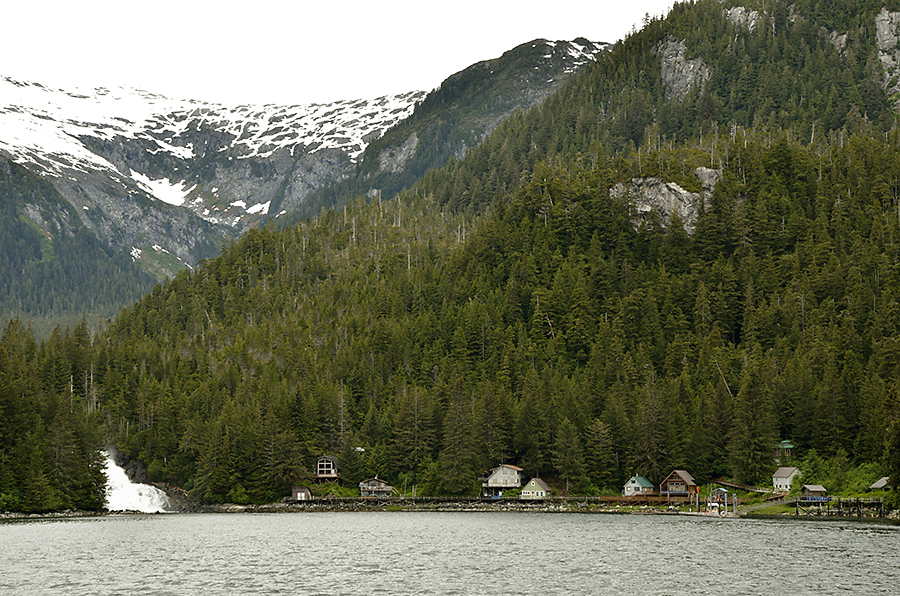 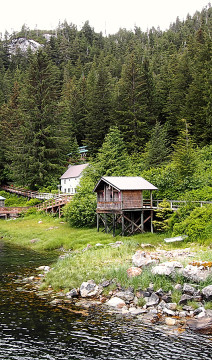 The houses are connected by a boardwalk, and the town has constructed a little public bath house with three booths, each with a huge metal tub, and a valve controlling the flow of 105+ degree water piped down from the hot springs.  The booths have a door on the boardwalk side, and an opening on the water side with a view of the waterfalls.  It’s a great way to relax and enjoy a soak, though it took a while for the water to cool off enough to sit in comfortably. The baths are visited by cruising boats like ours, charter boats, people from the local fishing lodge, as well as commercial fishermen who stop to fill their fresh water tanks and go for a soak.  The fresh water hose on the dock is left running – it’s insignificant compared to the amount of water coming from the waterfall, but it’s very disconcerting to see any water left running when you’re a boater with a limited supply.

The other way to enjoy the hot springs is to hike up into the woods and visit the natural pools, which are right next to the top of the waterfall.  You just can’t beat the setting, though you can’t soak for long since the water is so hot. 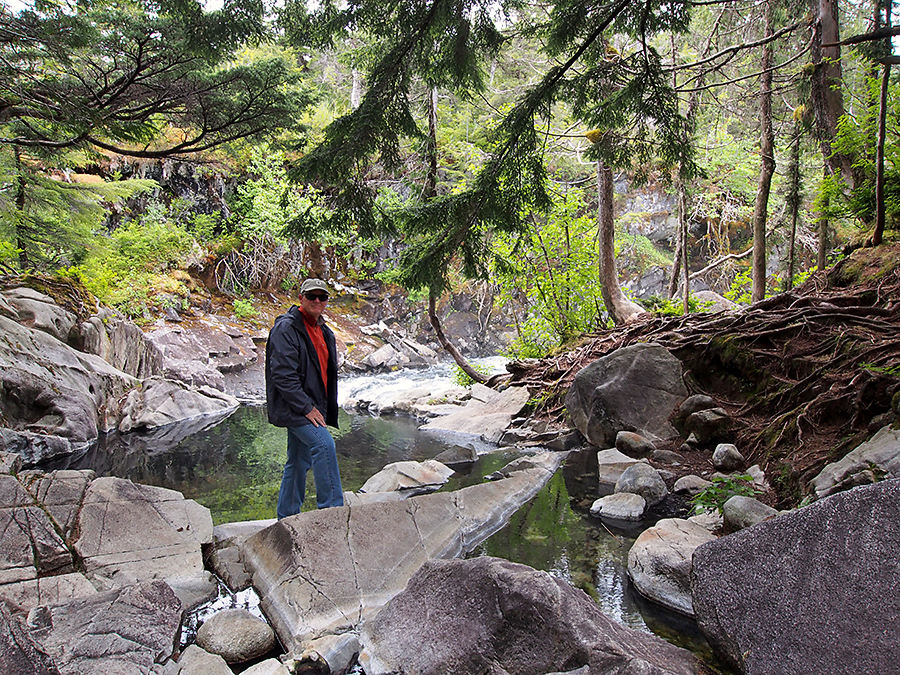 We hiked around to explore the first day, and returned for a nice soak on the second day… a unique experience.  The bear scat next to the trail reminded us to talk loudly while we soaked.  I didn’t see any bear hair in the pools, so I don’t think the bears like hot tubs… a very good thing. 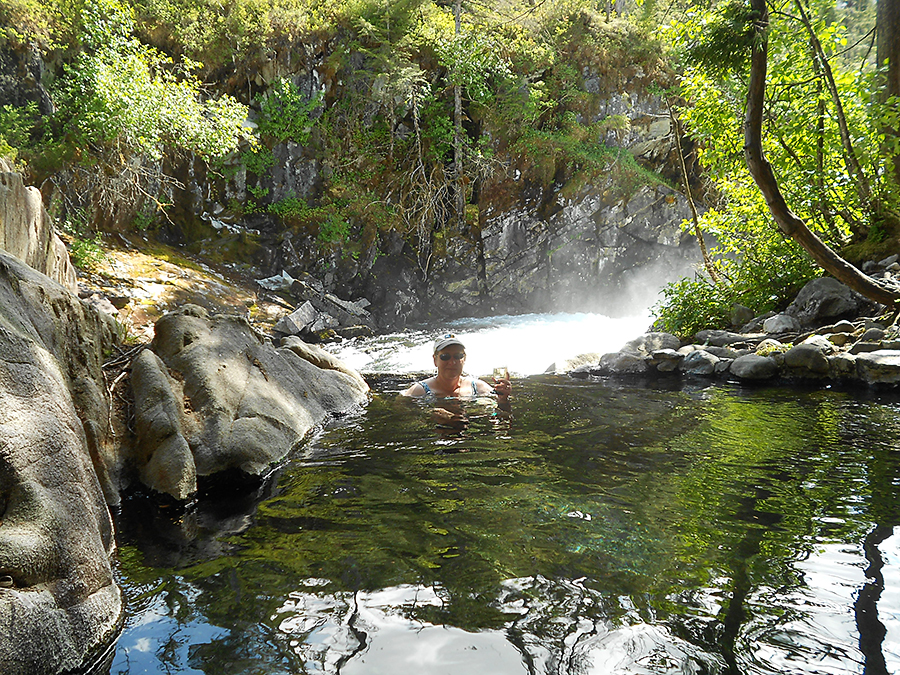