Leaving Pack Creek we have to spend several hours cruising through Seymour Canal – an area known for good whale activity, which did not disappoint! 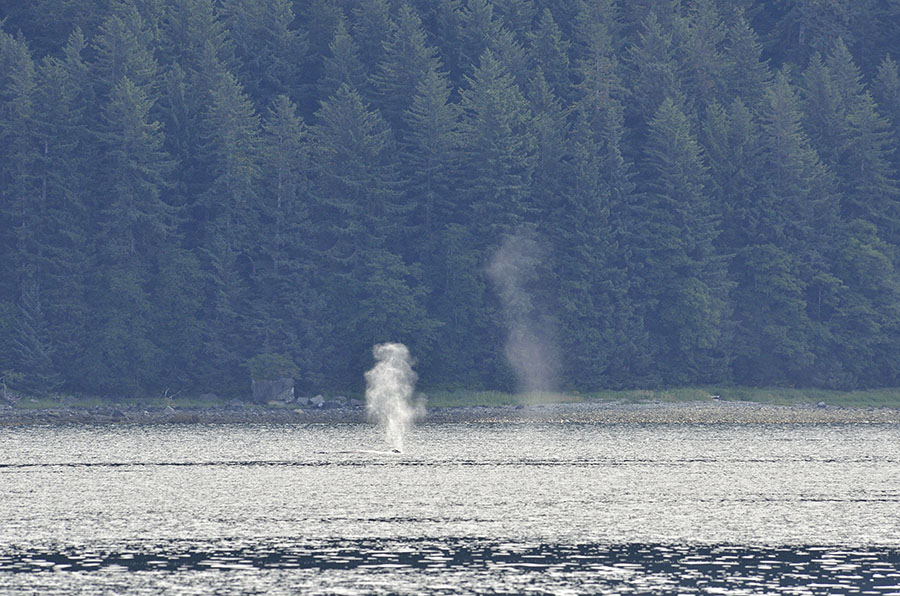 We saw lots of blows towards the east side, and before we even headed over that way some more whales showed up pretty close to us! 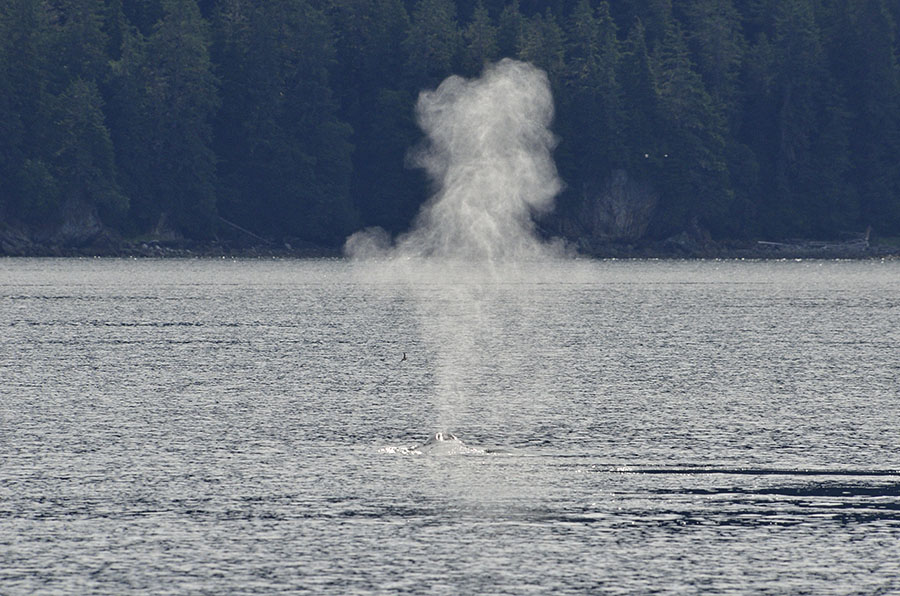 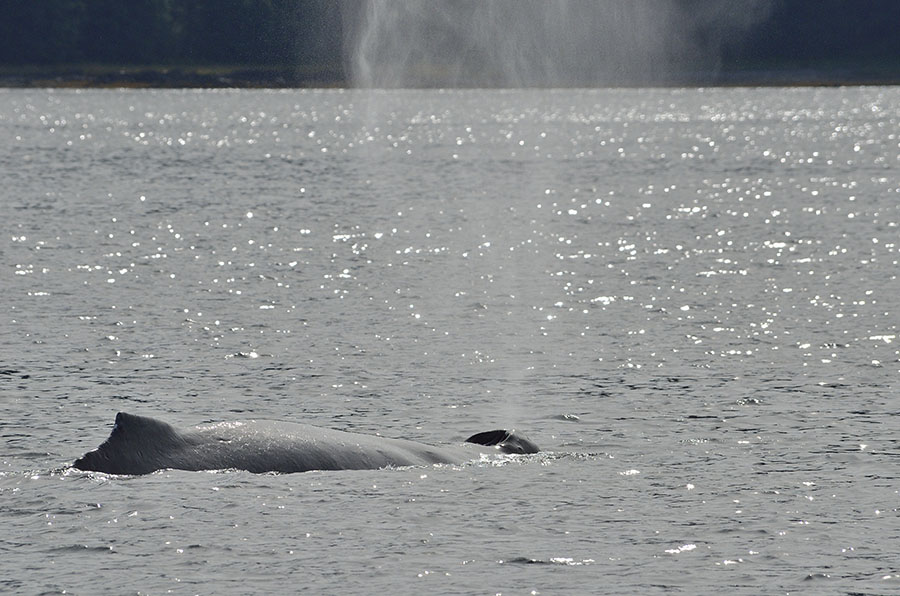 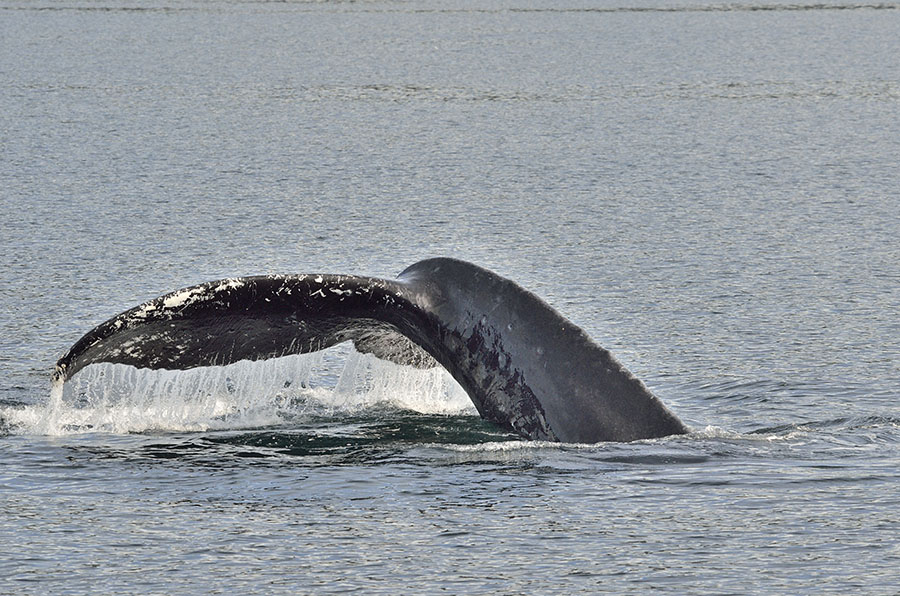 We kept our distance and watched them for a while as we cruised south.  After all the great bear action, it was fun to see a different kind of mammal up close!

We stopped back in Juneau, careful to time our arrival in Auke Bay harbor.  Auke Bay’s transient dock space is completely uncontrolled – you just tie up anywhere you can find a spot big enough, and hope that there’s some room in the nearest shared power box.  It’s not our favorite place, but it works when we need to go to The Big City.

Auke Bay is also where the whale watching and charter fishing boats tie up when they’re not taking cruise ship tourists out for an adventure, so we try to time our arrival when those boats are usually out.  Fortunately for us, we found the last big spot about 1/2 hour before the local gillnet fishery closed and all the gillnet boats headed into port! 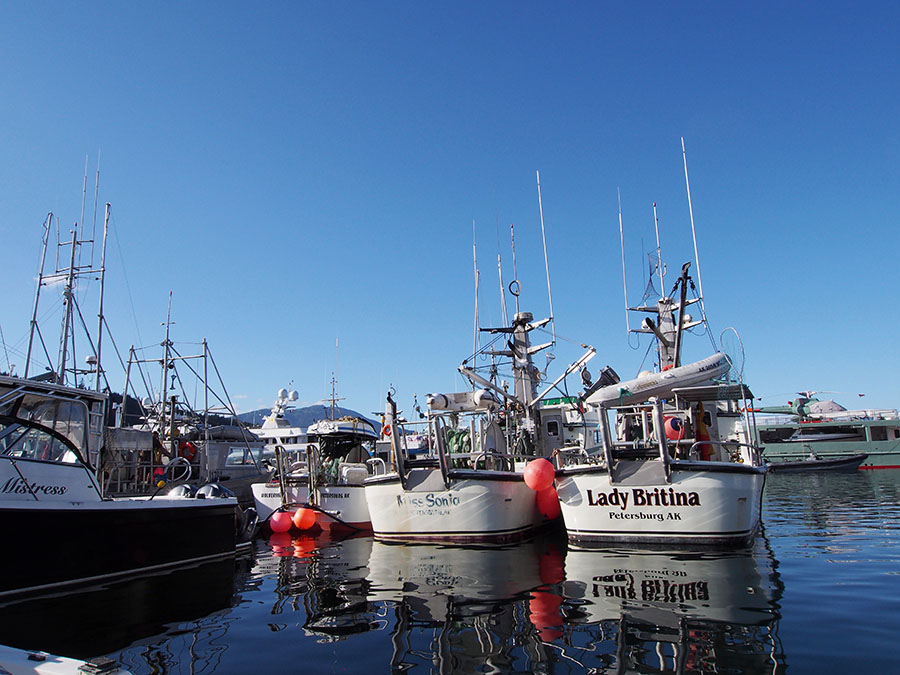 The gillnet boats are typically 32-40′ long, and there were so many that they had to raft to one another – three deep!  If you look in the background on the far right you’ll see this monster… a 160′ yacht with four-person helicopter (and several other toys)! 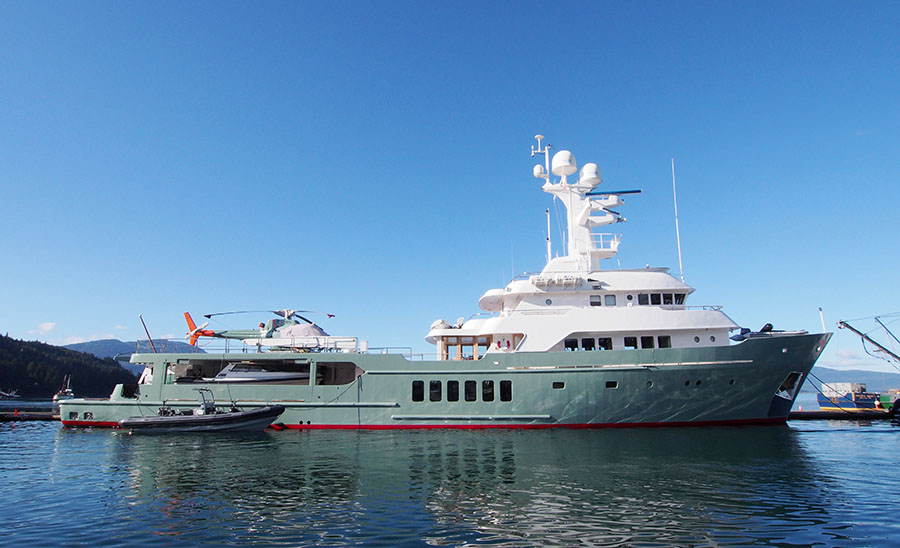 There were a few other large private yachts out on the breakwater dock – they come and go through the summer cruising season since Juneau is a good place to swap guests and to re-provision.

About two hours after the Invasion of the Gillnetters calmed down, the seine net fishery in nearby Amalga Harbor also closed, and the monster 58′ seiners swarmed the already-crowded harbor! 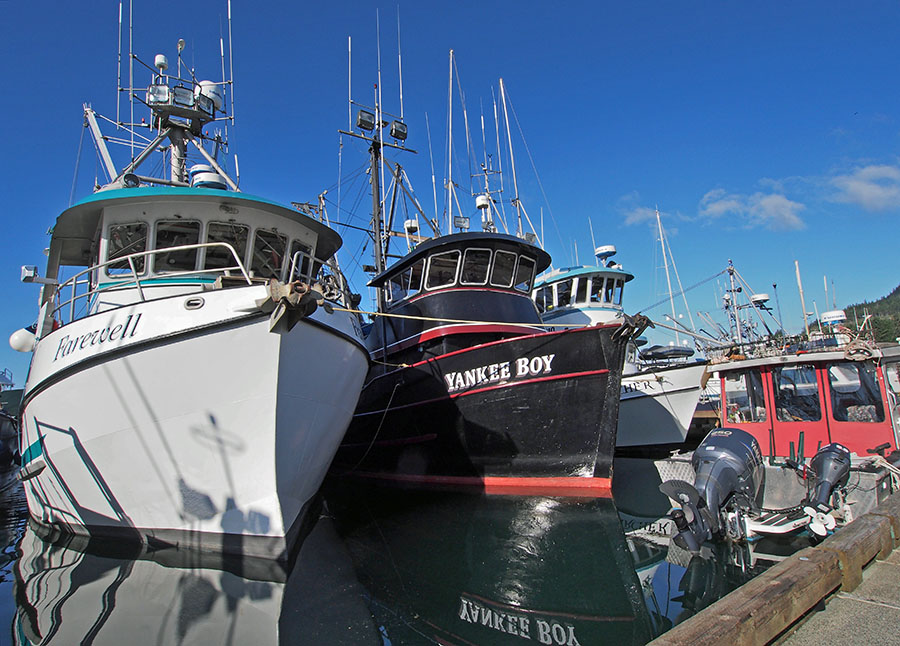 The fishermen are pretty good about helping one another, rafting boats together and helping anyone who might be trapped by the bigger boats.  It’s a pretty cooperative arrangement – sometimes stressful, but it works. 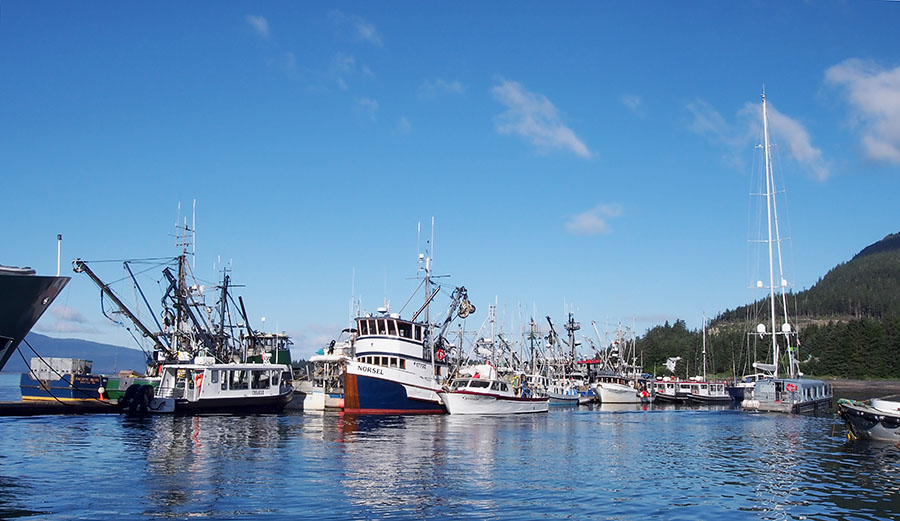 It’s not always this crazy in Auke Bay, but when the fishing is active nearby and the downtown harbor is full of cruise ship passengers wanting to see whales or go fishing, it’s a lively, fascinating place.

We lucked out with continued great weather – it has been a very warm and dry summer up here, which is not good for the salmon.  But it sure is pretty.  Here’s a view of the Mendenhall Glacier across a field of wildflowers. 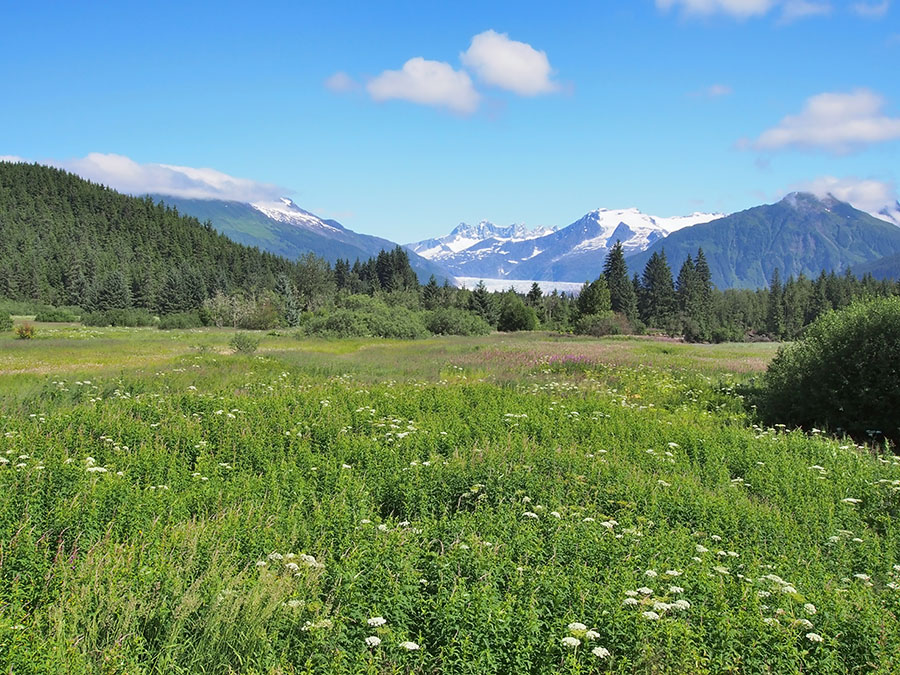 We’ve seen the Mendenhall many times, but if we have a rental car we always go up to check out the ranger lectures at the Visitor Center and to hike the trails.  This trip we also stopped to take a self-guided tour of the Alaska State Capitol – something we’ve not done before.  It’s not a very fancy building, as Capitols go, but there’s a lot of wonderful artwork on the walls from all over the state.  There’s no security, no receptionist (except at the Governor’s office – she was very nice), and it’s all just very laid back.  Very Alaskan. 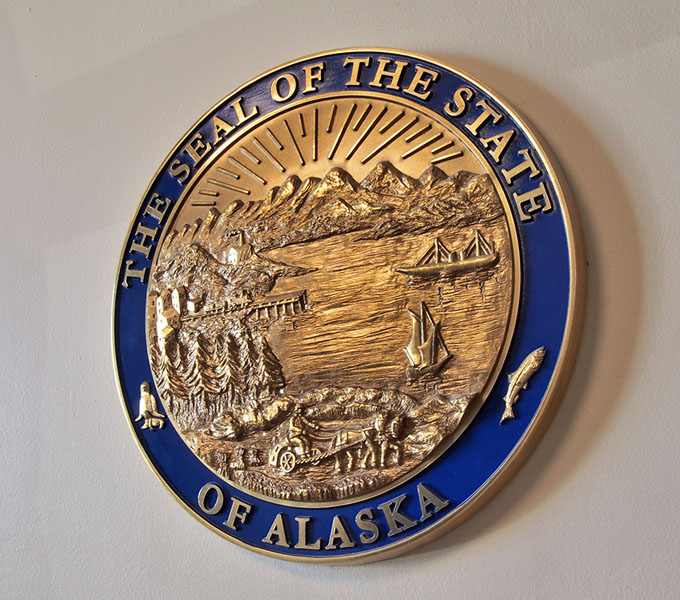 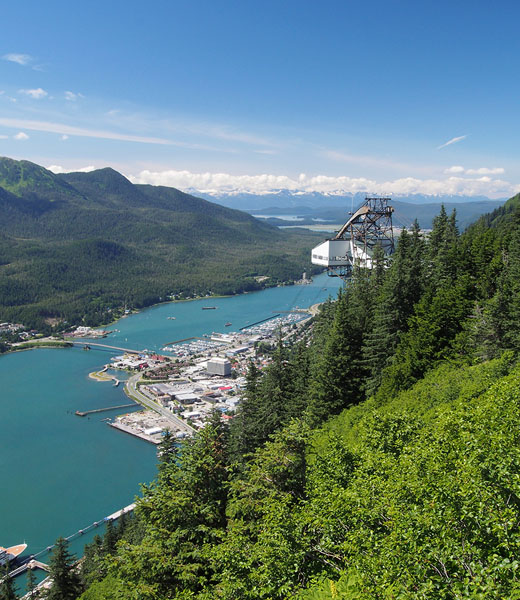 …and the visibility was so good we could see all the way to Auke Bay! 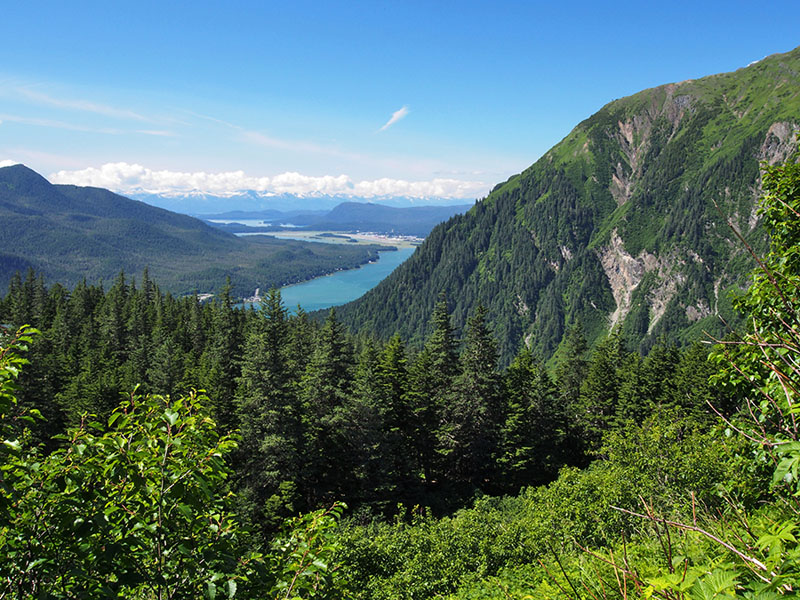