Glacier Bay is a special place – we think of it as “one stop shopping” for glaciers, wildlife, and native culture.  The bay is big and it takes every bit of a week to just hit the highlights.  The National Park Service limits the number of boats to 25 private boats, two or three smaller ships (like Un-cruise or National Geographic), and two cruise ships.  Private boats can get a permit for up to a week at a time, but the small ships only spend a couple of days and the cruise ships are just in the bay for 8 hours.  Park and native interpretive rangers board the ships to make sure the passenger’s experience in the park is something special.  The sheer size and scale of the bay makes it easy to dilute the boat traffic so we often feel like we have this massive place all to ourselves.

The entrance to Glacier Bay is near the tiny town of Gustavus, which was once the meltwater delta from the Grand Pacific glacier when it consumed the entire bay in the 1750s.  Now the flat delta plays host to beautiful fields of lupine… 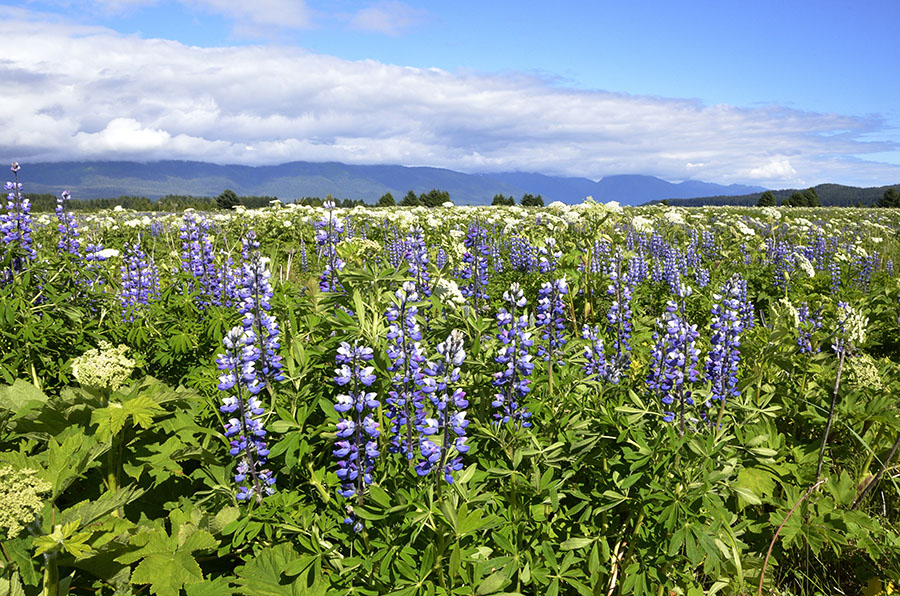 …and other wildflowers such as columbine. 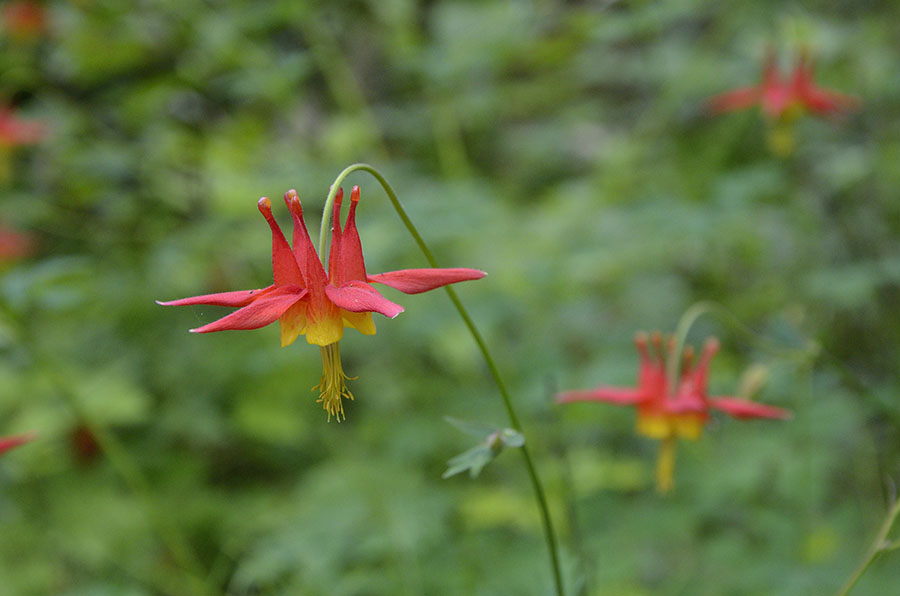 Sonja, the same docent as last year, was working at the Tribal House and we just love the way she shares her culture and stories from the heart. 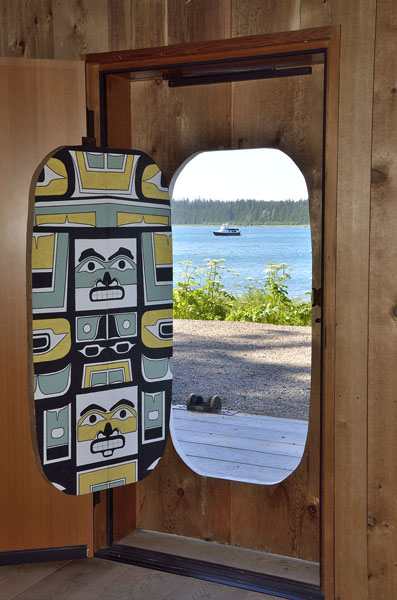 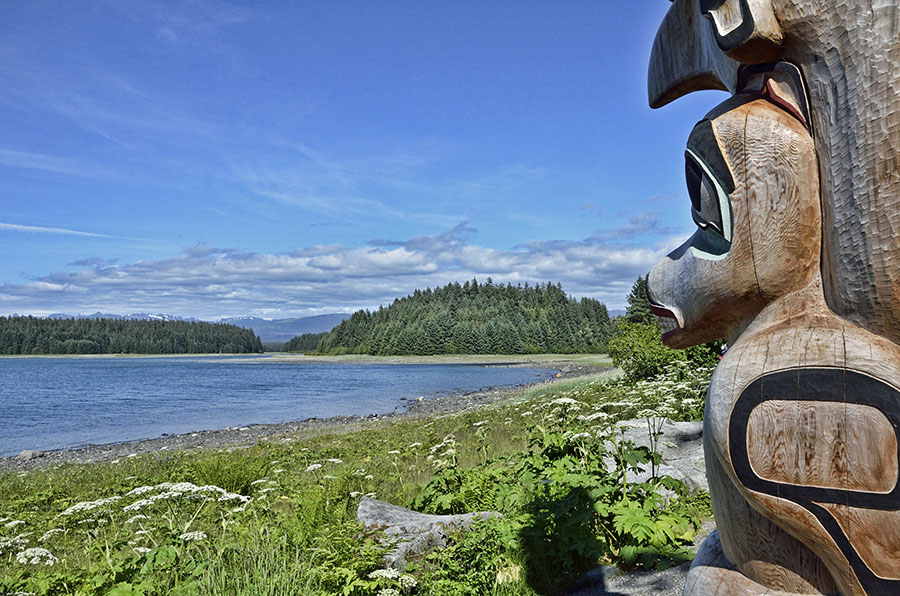 After a day exploring around the park headquarters we headed up bay, greeted by small rafts of sea otters. 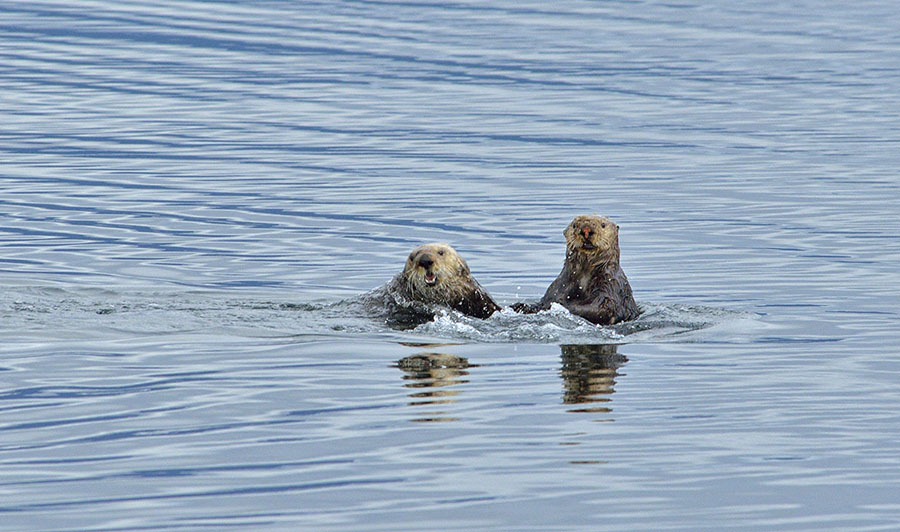 We always make our first stop at South Marble Island to check out the Steller sea lion colony and the adorable puffins.  There weren’t as many puffins around as we’ve seen in previous years – we’re hoping to get more information about that from one of the park biologists.  Tufted puffins always remind me of blonde California surfers, with their long golden locks. 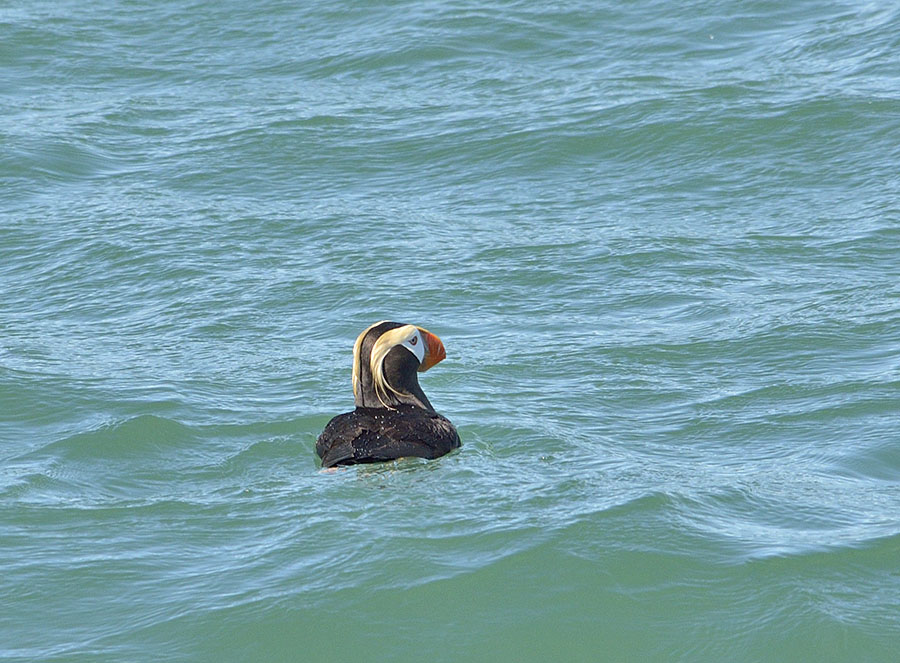 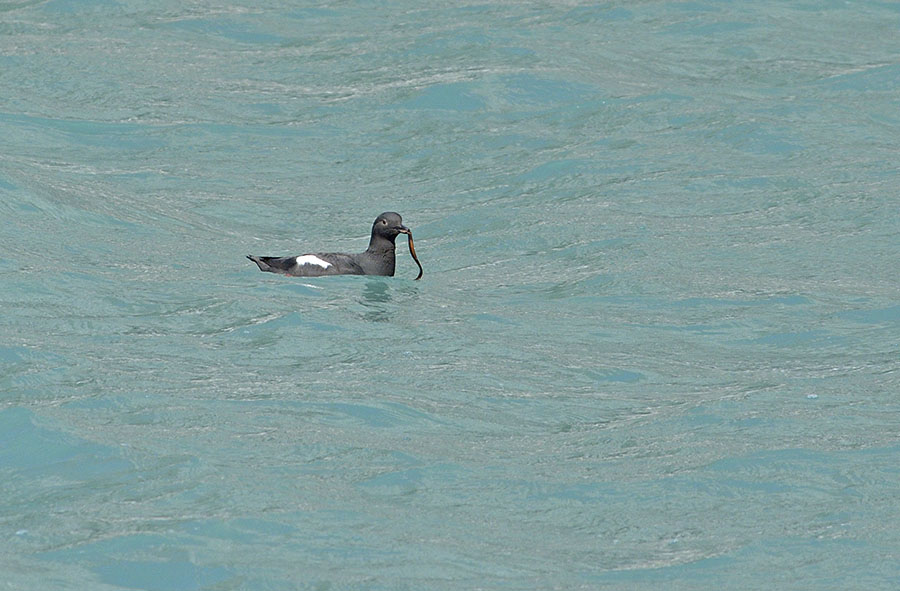 and pelagic cormorants were plentiful, and the bright sunny weather really showed the iridescent color of the cormorants, which normally look plain black. 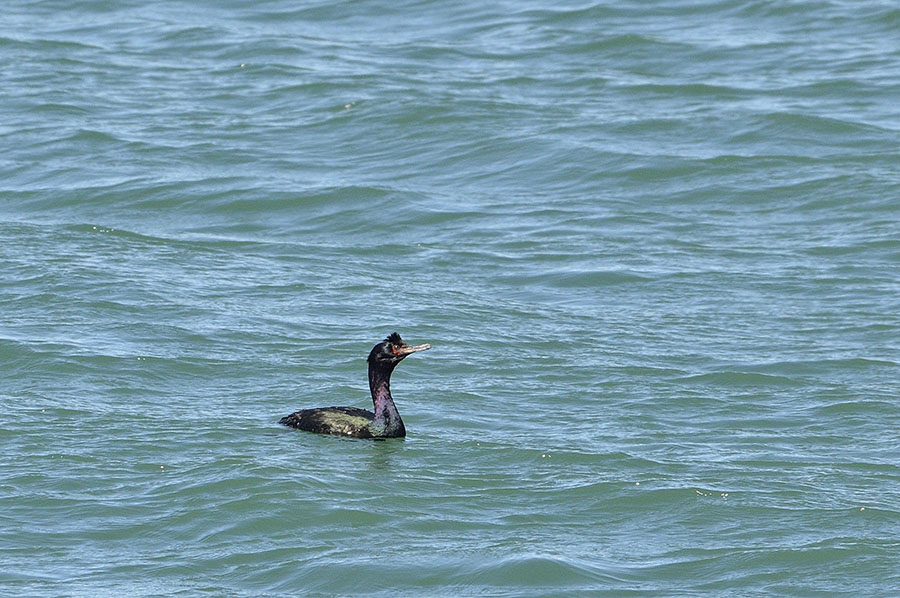 The next day we checked out our usual spots to look for wildlife, and found a sub-adult brown bear digging for clams along the tide-line.  We were able to drift and watch him for about 15 minutes, until our arms got tired of holding up the binoculars!  From there we checked out the delta in Tidal Inlet looking for bears or wolves, but the regional drought left little water in the normally busy streams.  Around the corner Gloomy Knob didn’t disappoint as we found two clusters of mountain goats to watch. 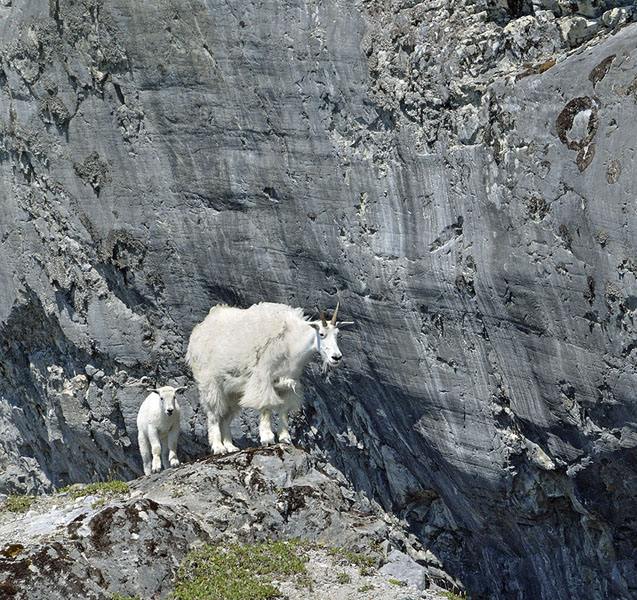 I was concerned that we wouldn’t see many goats because of the hotter-than-usual sunny weather, and a number of them were lounging under small alders and willow thickets.  This one dug a shallow hole to lay in, 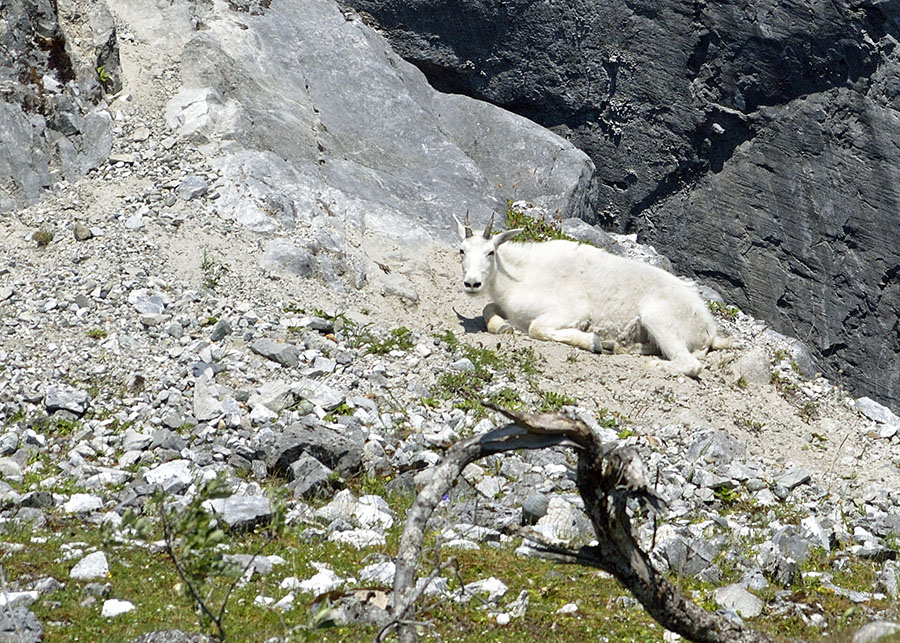 and these goats climbed down below the high tide line to lick the salt off the mussels and nibble some salty marine plants in between.  We’ve never seen this behavior before – we had to ask the rangers about it later on. 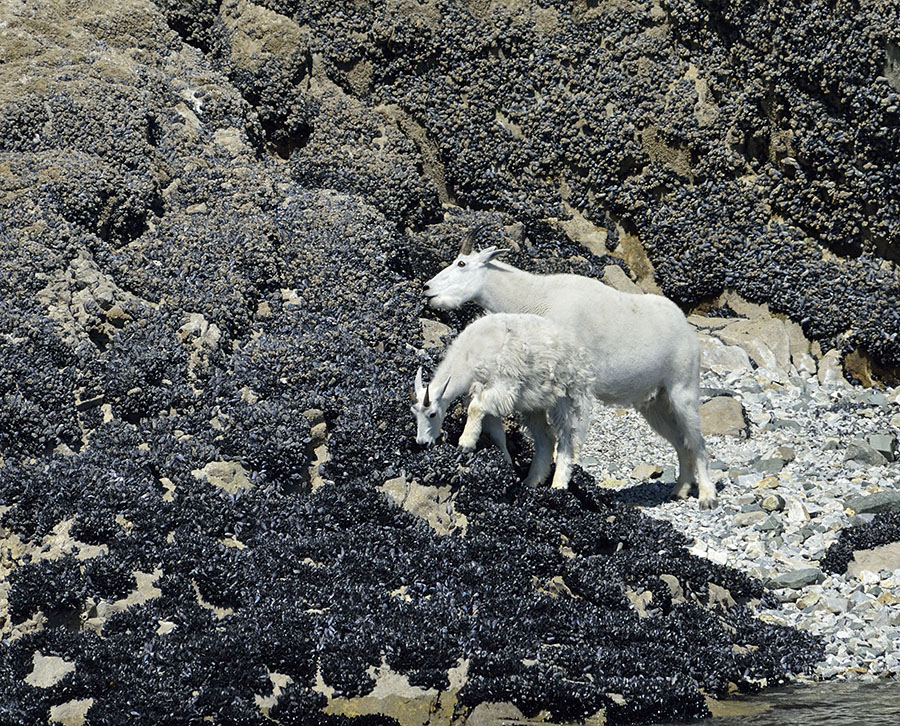 Following our usual route up the western arm of the bay, we went behind Russell Island to look for wildlife on the delta, and found a pair of humpbacks feeding where the opaque silty glacial meltwater meets the blue seawater. 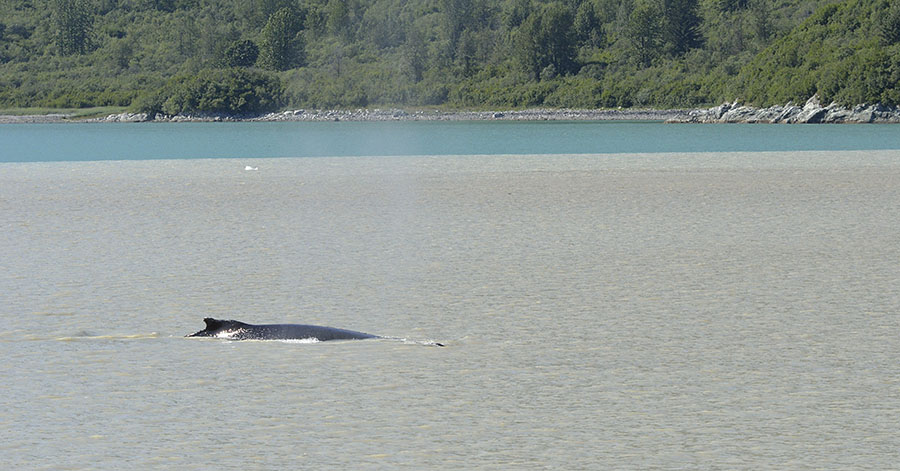 The clear sunny weather gave us the best views of the distant Fairweather mountain range we’ve ever had.  Mount Fairweather (elev. 15,345′) stood out even though it was more than 50 miles from us.

I have a lot more photos to share from Glacier Bay… so stay tuned.

1 thought on “A Visit to Glacier Bay”