There are a number of fjords in southeast Alaska, and a well-known pair are the Tracy and Endicott Arms, about 50 miles north of Petersburg. 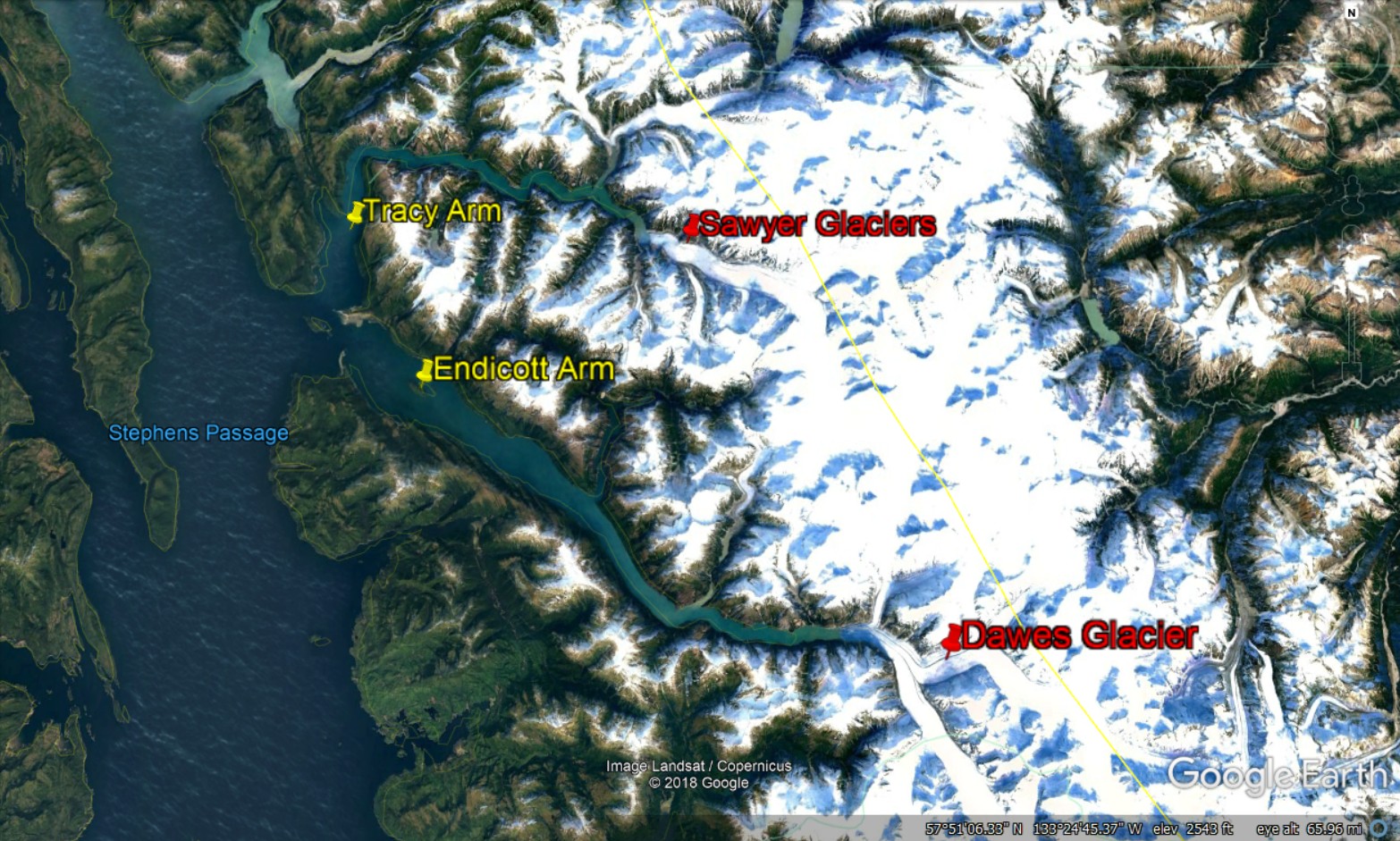 Cruise ships often go up one or the other arm to visit a glacier, depending on the ice conditions.  The glaciers at the heads of these arms can shed a lot of ice so sometimes the arms are impassable.  The entrance to each arm is a pinch and shallow bar that is the terminal moraine of the Sawyer or Dawes Glaciers.  The icebergs grounded here may look small in the photo, but they are as big as a house.

We haven’t been up to the Dawes Glacier in a few years so we headed up Endicott Arm.  As we approached the head we started to pick our way through the brash ice, but we eventually chickened out – it was too dense and we don’t want to risk damaging a prop or a stabilizer fin.  This cruise ship was more daring, but it has a steel hull that can tolerate a lot more than we can. 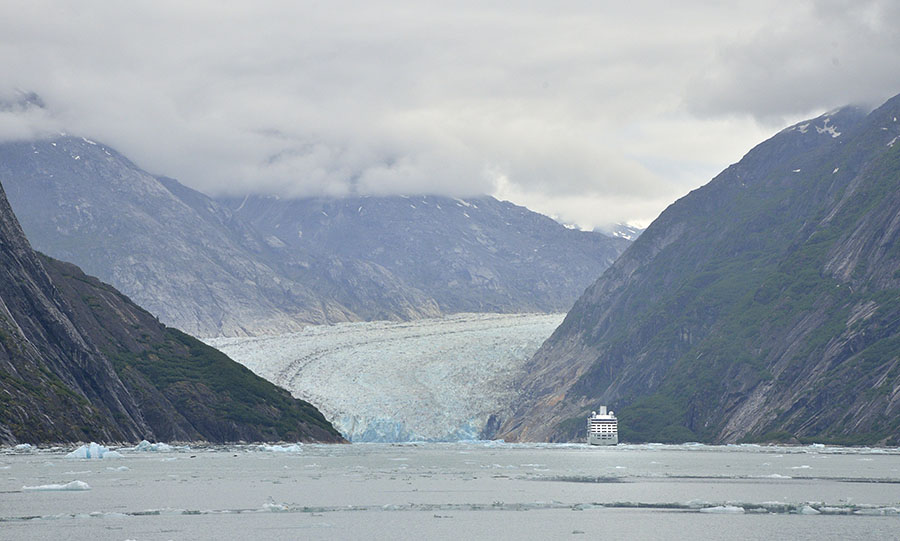 The reward for turning around early was spotting some seals with young pups hauled out on the ice.  We take care to keep a good distance from them since the pups aren’t insulated well enough to handle the cold water yet, but they will slide into the water if they feel threatened. 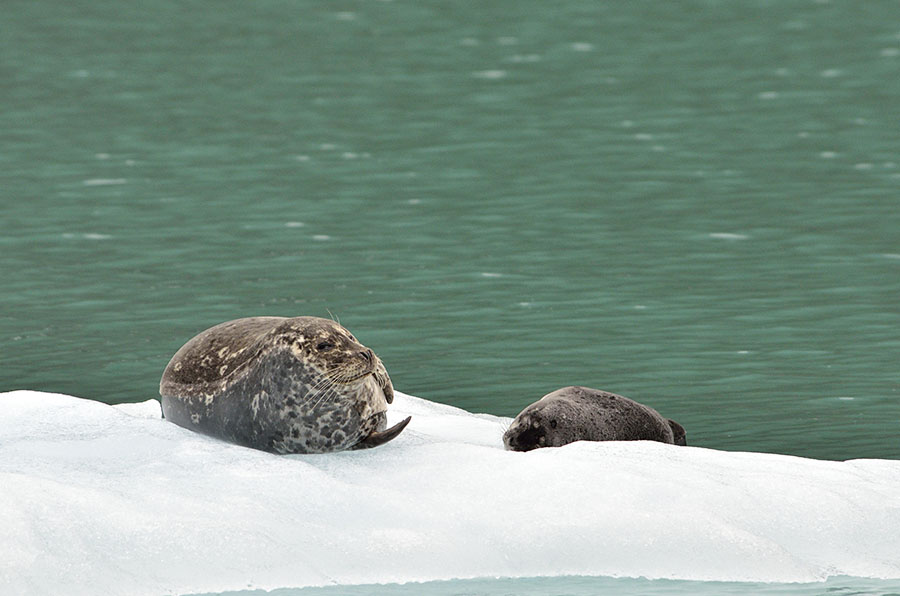 Note that the sleeping gray pup below still has a bit of umbilical cord attached – that’s a pretty new pup! 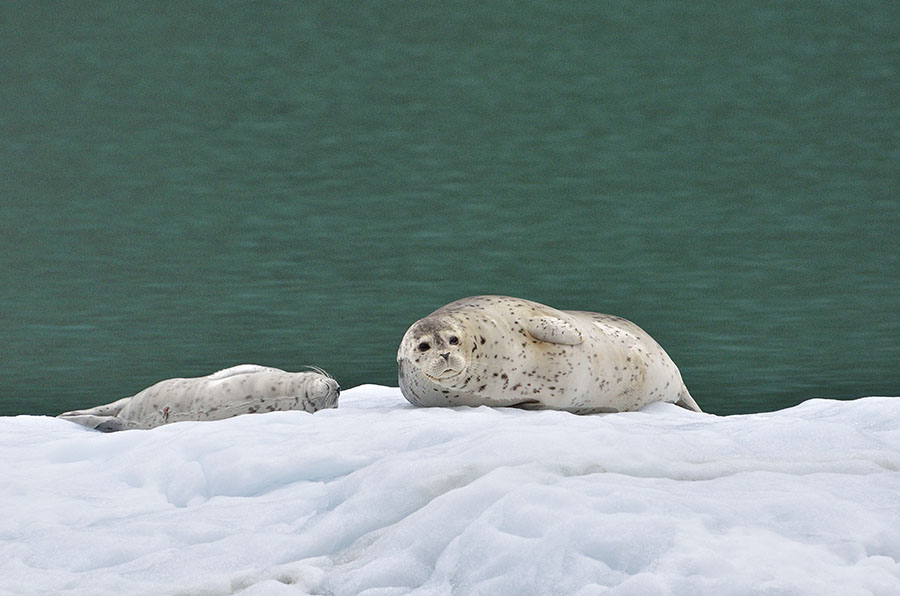 Part way up Endicott Arm is a little side fjord called Ford’s Terror.  I’ve written about our forays into Ford’s Terror before – it’s magnificent, and this time was even better because we had the place all to ourselves for three perfect days.

To get into Ford’s you must time your arrival at the entrance for “high slack” (slack current after high tide).  Even 30 minutes before slack the water in the narrow, blind corner entrance channel can have standing waves and whirlpools.  When the water goes quiet it’s safe to enter.  First you line up with this waterfall at your back… 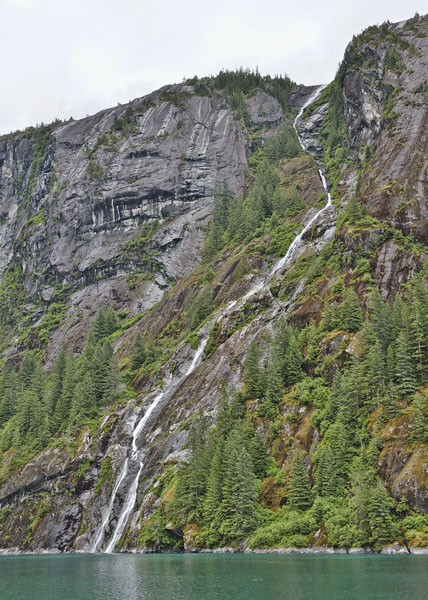 …and make your approach in between the two rock reefs on either side of the channel.  Watch for glacier ice that can sometimes occupy the channel.  Be sure to call a “SECURITAY” message over the radio, and blow the horn to alert any outbound traffic since you can’t see around the corner – there’s no room to pass in the channel!  Once you’re through, the rock walls soar straight up and you start to see (and hear!) a great variety of waterfalls.  Our anchorage is like a gigantic bowl and we are a mote floating in it.  The views are sublime. 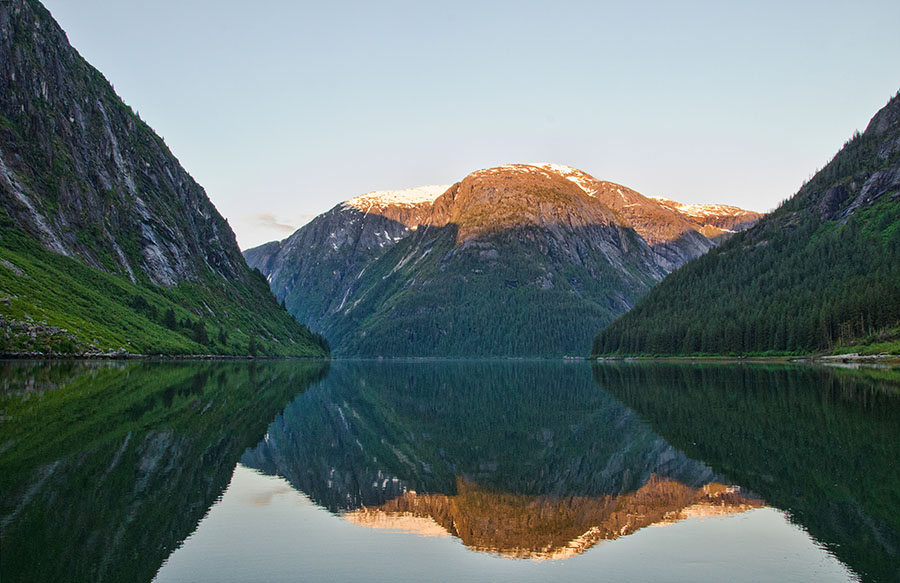 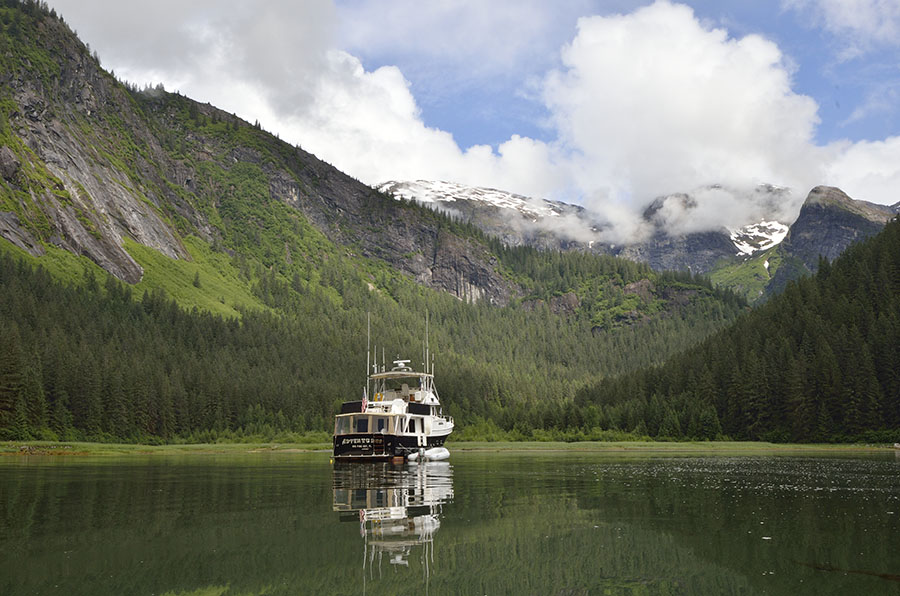 We enjoyed watching black bears clamming and eating grass along the shoreline, a seal kept spying on us, and there were plenty of birds to watch. 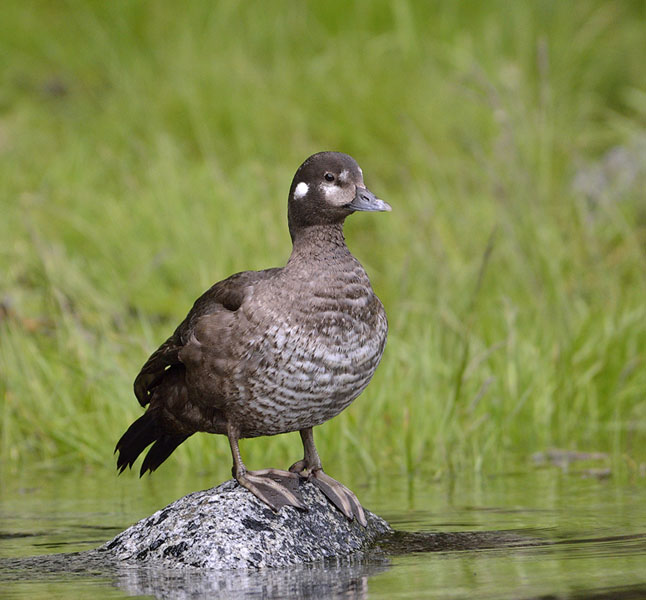 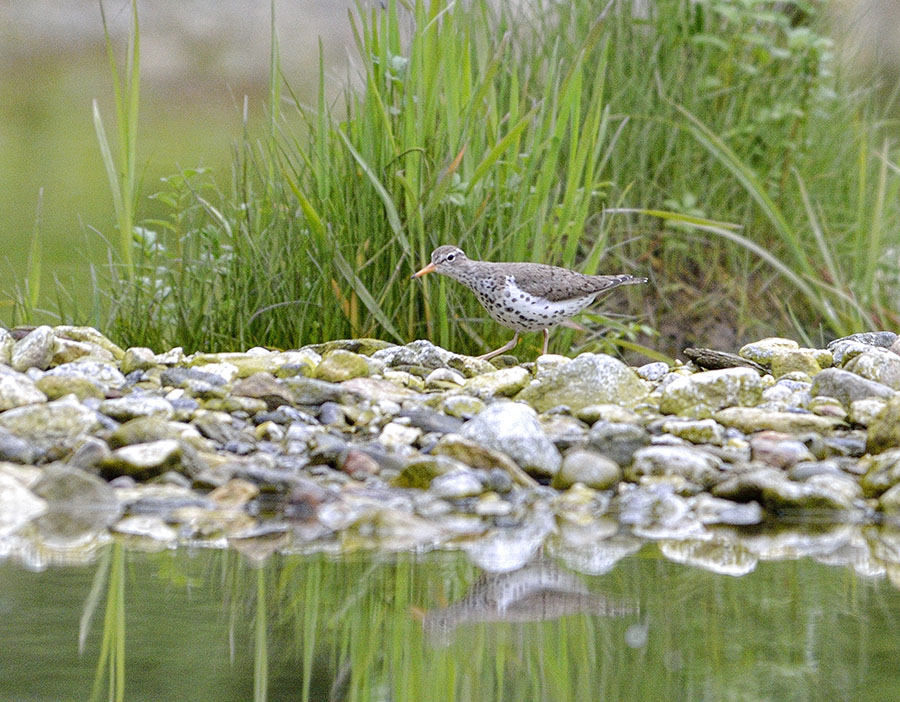 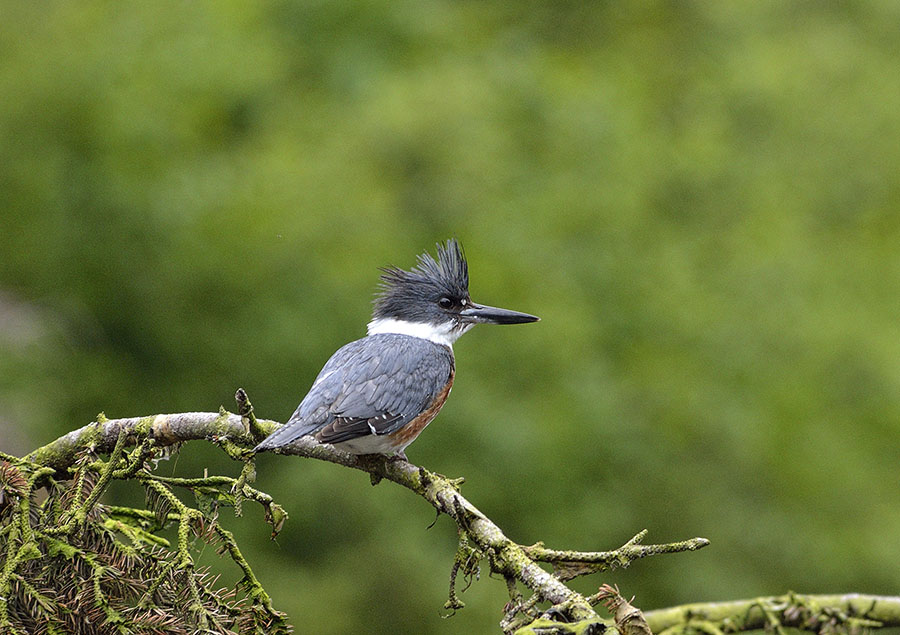 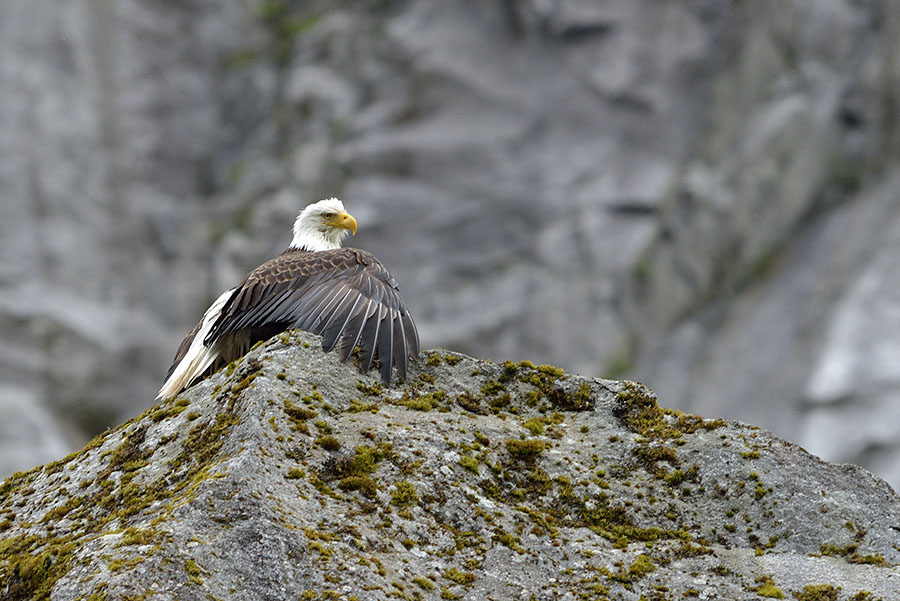 It’s fun to return to places year after year, noting changes that occurred over the winter.  This year we found a couple of spots with “blowdowns” – trees snapped off or blown over.  We couldn’t see any signs of landslide nearby, so we think it might have been caused by a very localized microburst of wind.  Whatever it was, I’m glad we weren’t around when it happened!  Imagine the force that can snap a Sitka spruce or hemlock off in the middle. 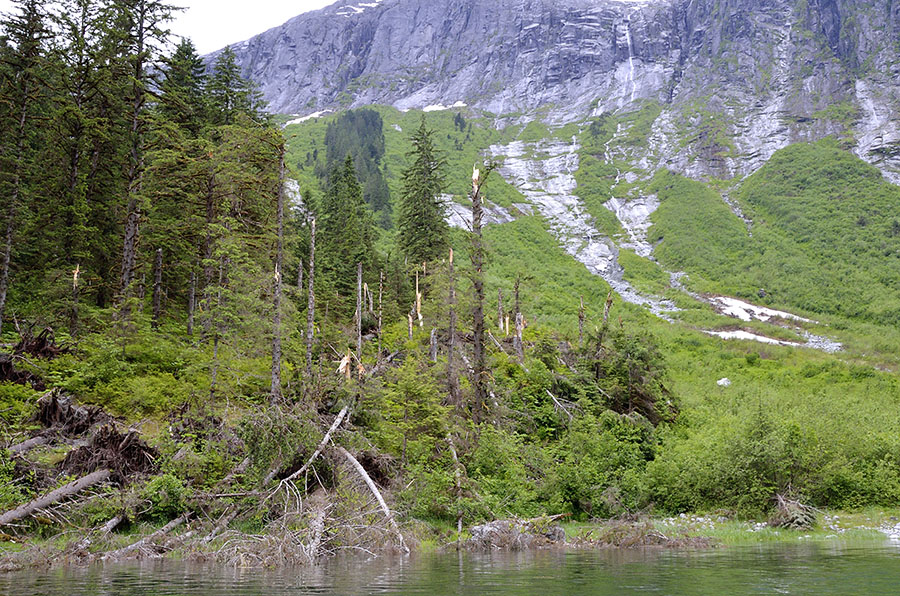