This year was the 10th Annual Rainforest Festival in Petersburg, and we wanted to be home in time to enjoy it.  There were art shows, events for families and children, lunchtime science lectures, trips to the Le Conte glacier and Thomas Bay, hikes for foraging and to learn more about local flora and fauna, and a Wild Foods dinner.  All the activities go forward, rain or shine.  We had rain.  It’s September in the rainforest – what did you expect?  This town loves science and nature, and we’re so lucky to have enthusiastic biologists and scientists who are willing to share their knowledge and experience, working for the US Forest Service, Alaska Fish & Game, or retired here in town.

All the events we attended were great, but I think our favorite was the hike led by a local biologist and a mycologist from Oregon (“just call me the fungus guy”). 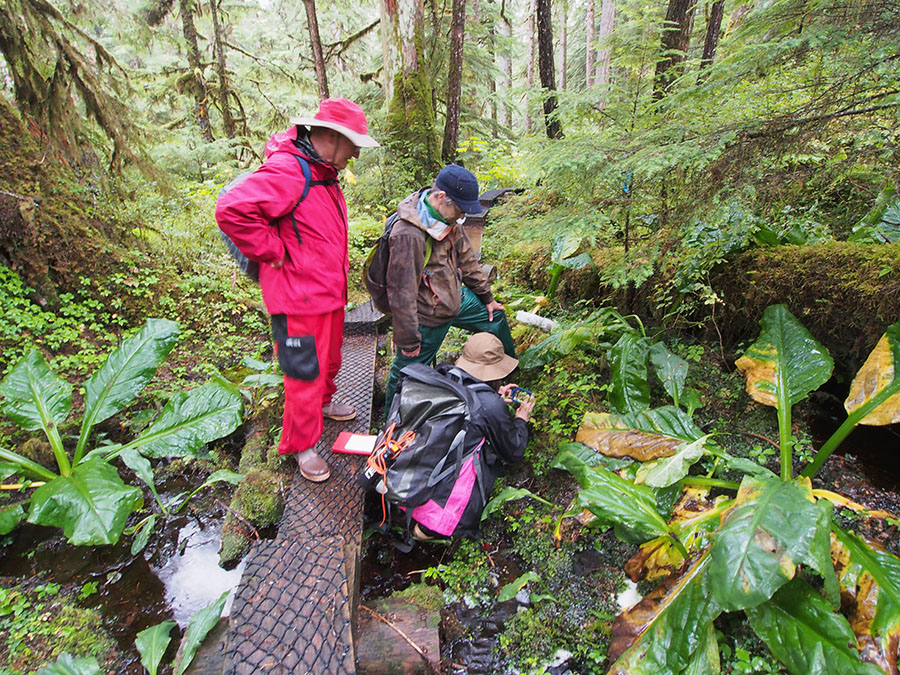 We live in a place where food is very expensive because nearly everything comes up here by barge or air freight, and it usually shows signs of the long hard trip.  Fishing is important for subsistence (as well as to earn a living), and hunting and foraging are also common activities.  While the experts were finding a wide variety of mushrooms to show us, they were careful to point out those that are edible (and how to best prepare them) and those that are not… as well as mushrooms and fungus that are just interesting. 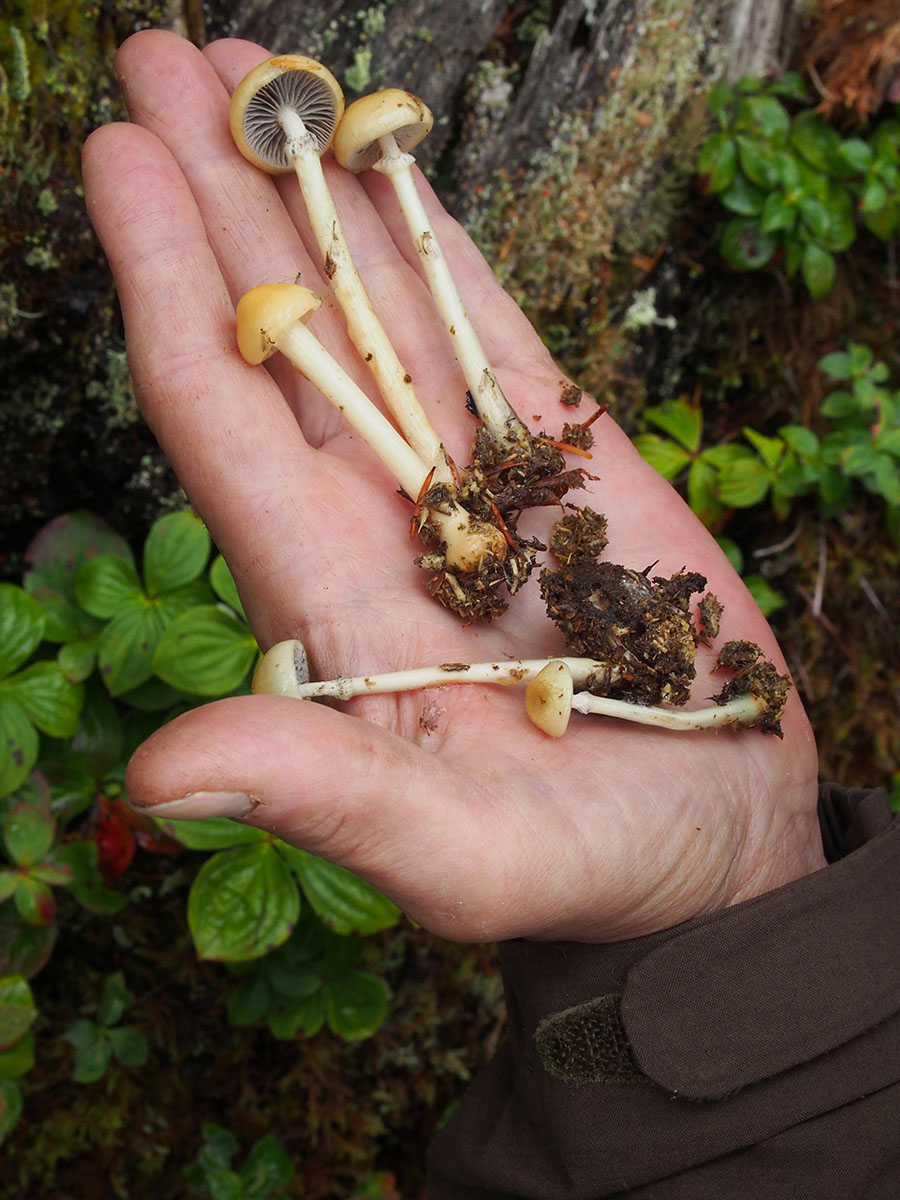 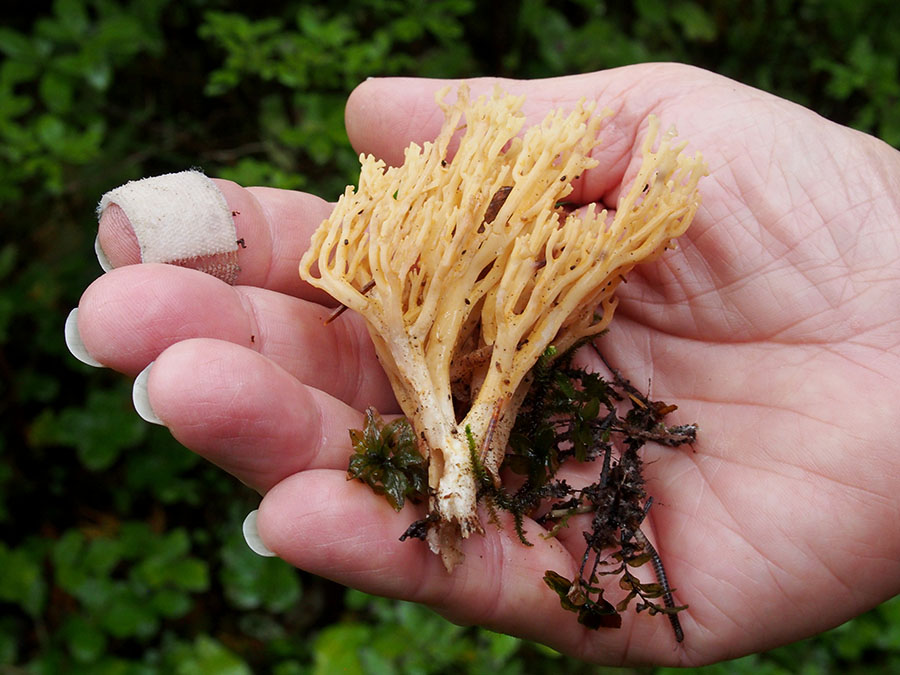 Biologist Karen found a big cluster of yellow chanterelle mushrooms, and she hauled out her waxed paper bags to harvest some. 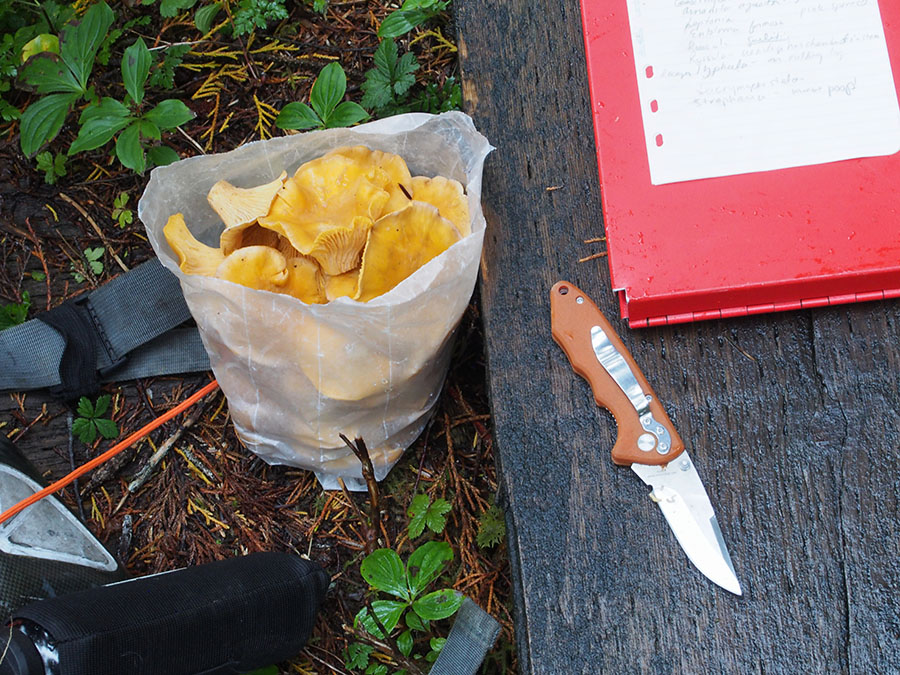 Just because you’re in the midst of science doesn’t mean you can’t collect some treats too!  We stumbled on a “bears beard” – an uncommon find that grows on the ends of large old-growth logs.  It was about 7-8″ in diameter, and Biologist Karen was thrilled when no one else wanted to claim the prize. 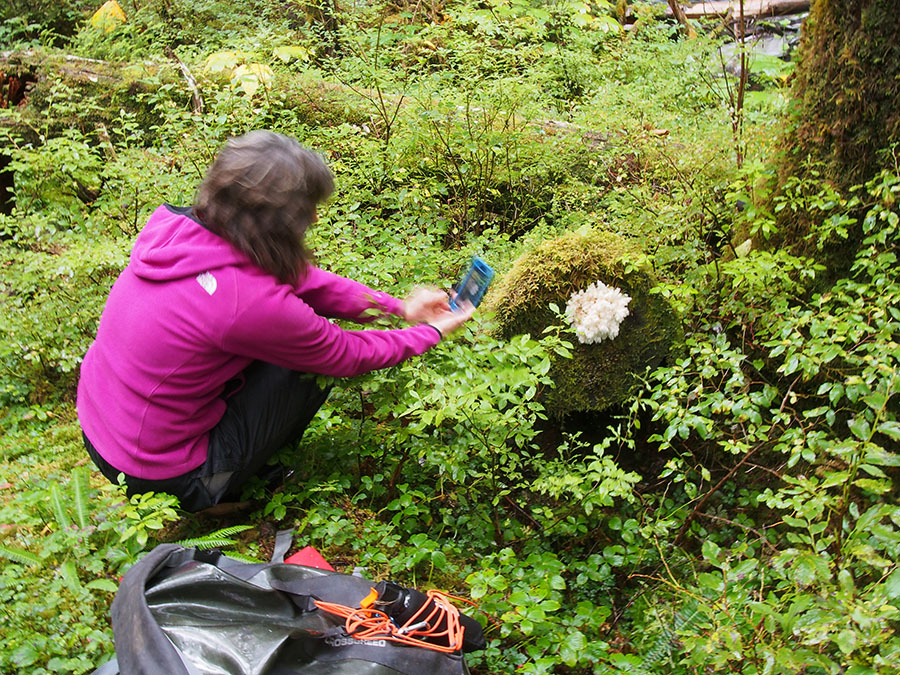 I don’t care much for mushrooms, but we love berries so we happily munched on red huckleberries as we hiked, some blueberries, and my favorite – low bush cranberries, also known as lingonberries in Scandinavia.  (I left one to photograph…) 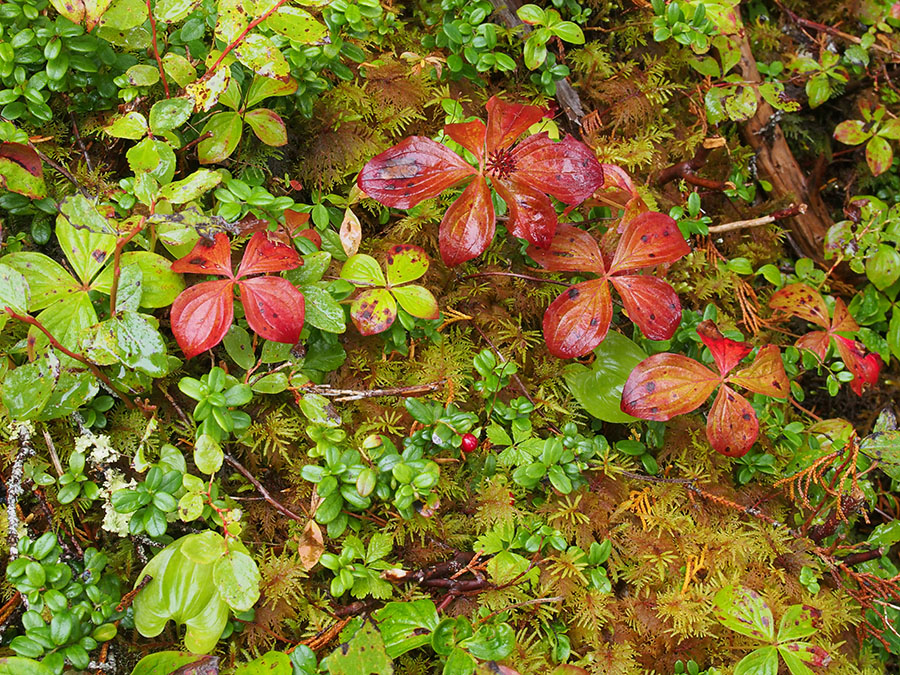 While many of the berries have been eaten by bears and birds by now, the high-bush cranberries were plentiful.  They’re very tart, but our friend Barb makes a fabulous ketchup with them, so we filled some bags for her as we hiked.  The enthusiasm of the scientists was infectious and we enjoyed the explanations of various rare finds, helping to hold their sample boxes for collecting.  The small stalk-like fungus growing on moose scat sent “fungus guy” Ron over the moon, and he carefully packed them (turds and all) for further study.  I didn’t take a photo of that; I photographed some tiny mushrooms that were about 1/4″ tall instead. 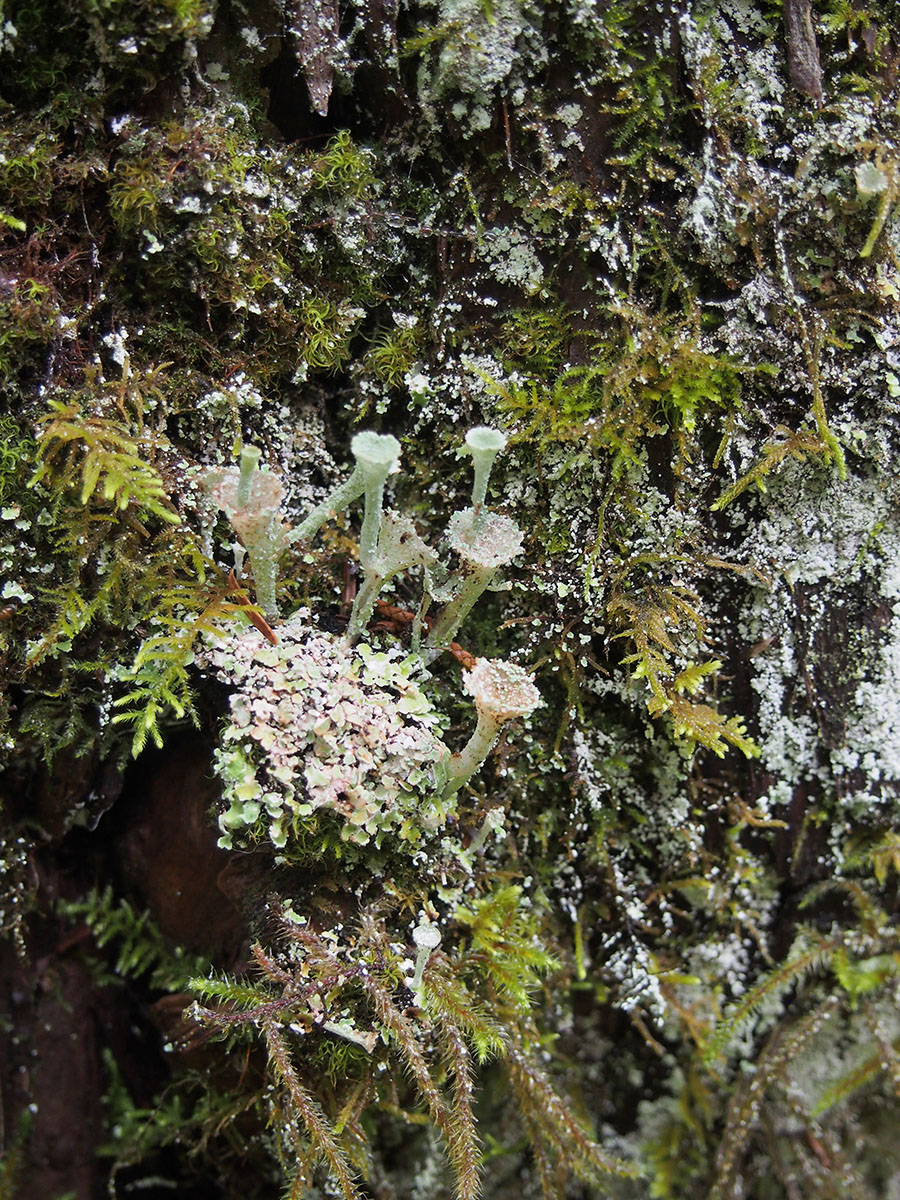 The rainforest is an amazing place where trees grow to massive sizes, and where a fallen tree becomes a “nurse log” upon which seeds can settle and germinate, and where the roots become a wall of soft green moss and a home for feathery ferns. 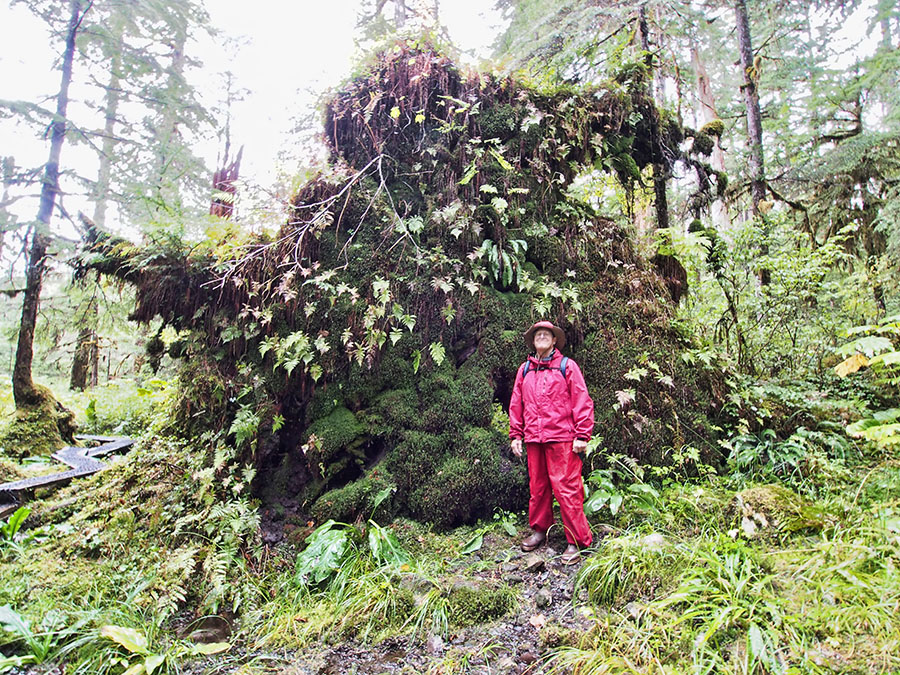 We learned so much and enjoyed the group of people we were with, getting a new appreciation for our island home. 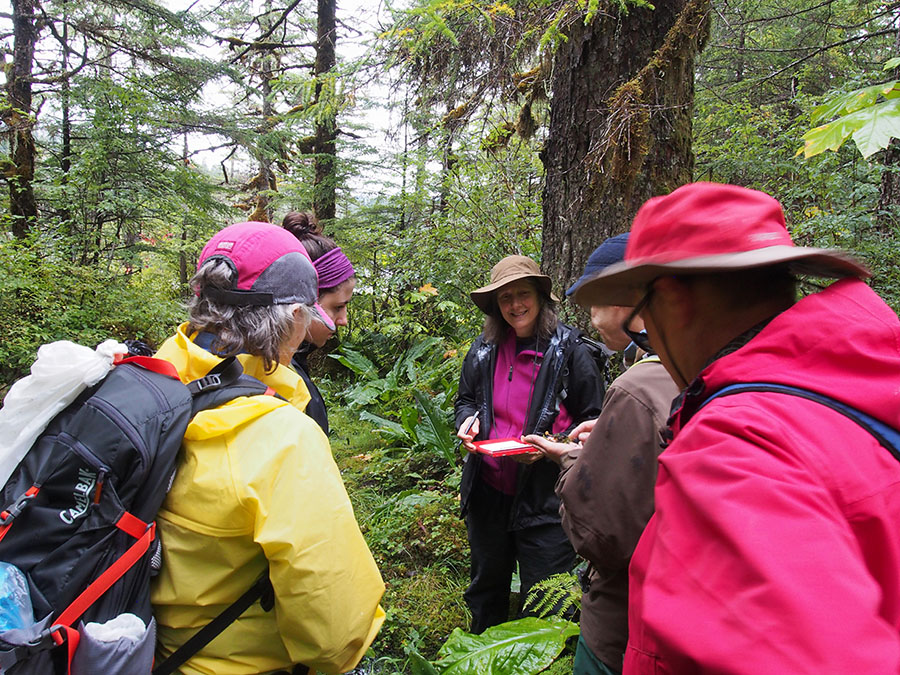 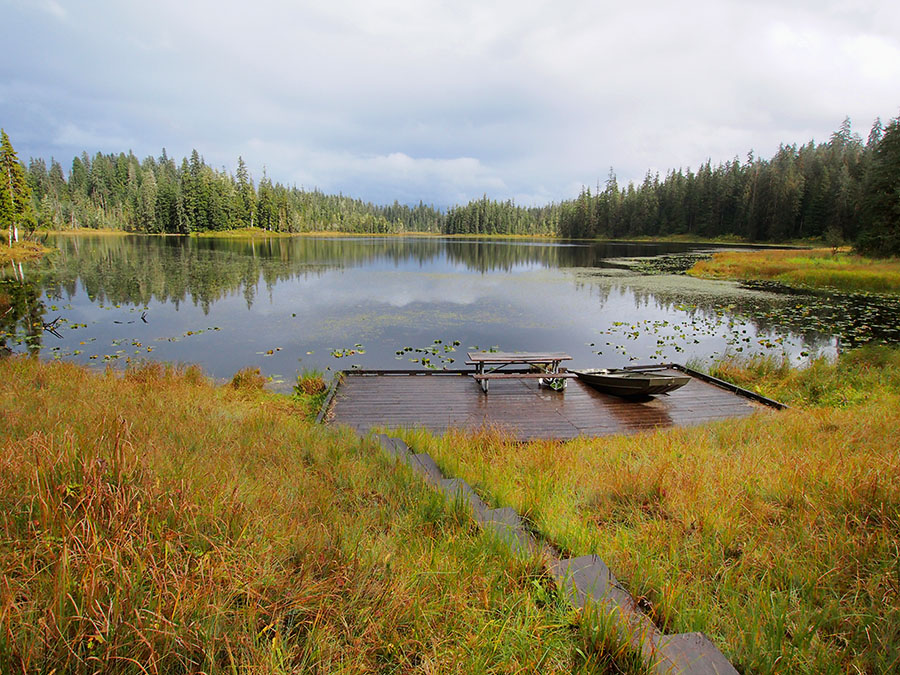 I think it says a lot about a town where attendance at a brown-bag lecture about ice worms will fill the Library conference room.  Yes, ice worms – and before you laugh just know that these 1/2″ long creatures can travel at speeds of 3 meters/hour, they can move through solid ice, they make a diurnal migration, and they can only survive at temperatures between 20-44 degrees F.  How’s that for an amazing creature!  They eat snow algae (who knew snow harbored such nutrition?), and if you scoop up a handful of snow and/or ice containing the worms you can keep them as pets in a jar in your refrigerator for at least a year.  Who says we don’t know how to have fun up here??  Actually NASA and the military are studying ice worms to understand the potential for life on frozen planets and moons, and to figure out how the worms move through solid ice.  The town of Cordova, Alaska has an annual Ice Worm Festival.  Maybe that’s going a little too far.

When we’re home in Petersburg we always listen to our local radio station KFSK (“fisk” is Norwegian for fish), and it’s a great source for local news and announcements… such as a report that some orcas were in the Narrows, heading north towards the harbors.  I grabbed my long lens and went to the end of the dock to watch for them.  In the meantime the Steller sea lions were groaning out on the buoy, and a big male was cruising nearby. 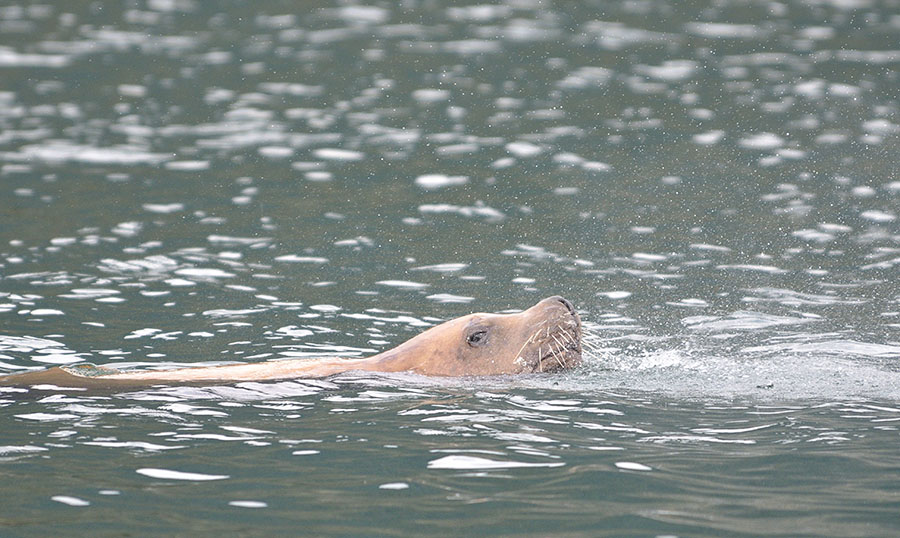 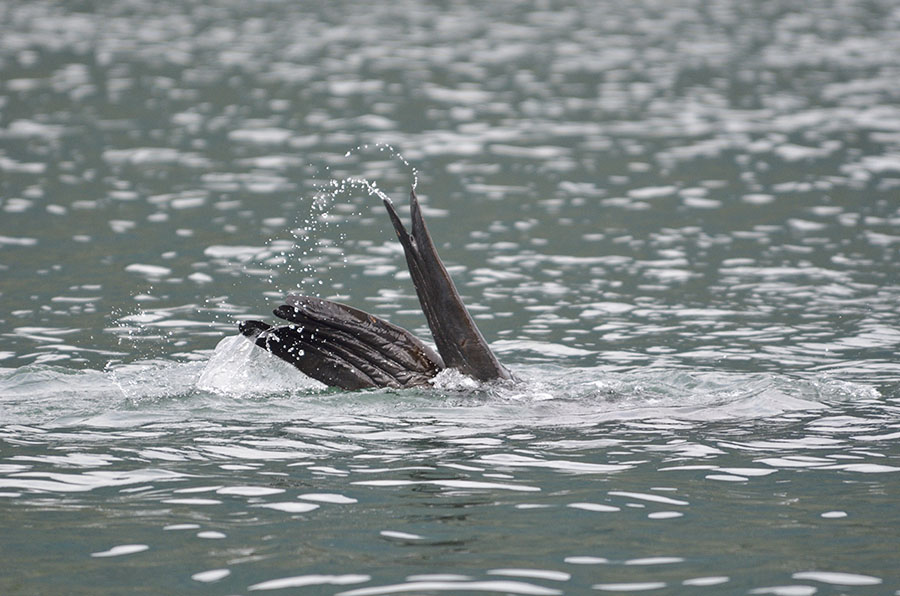 I spotted the pod of orcas, but they were busy feeding at the mouth of Petersburg Creek for a while, finally turning north again.  I counted at least 7-8 animals, and at least one male with his tall dorsal fin. 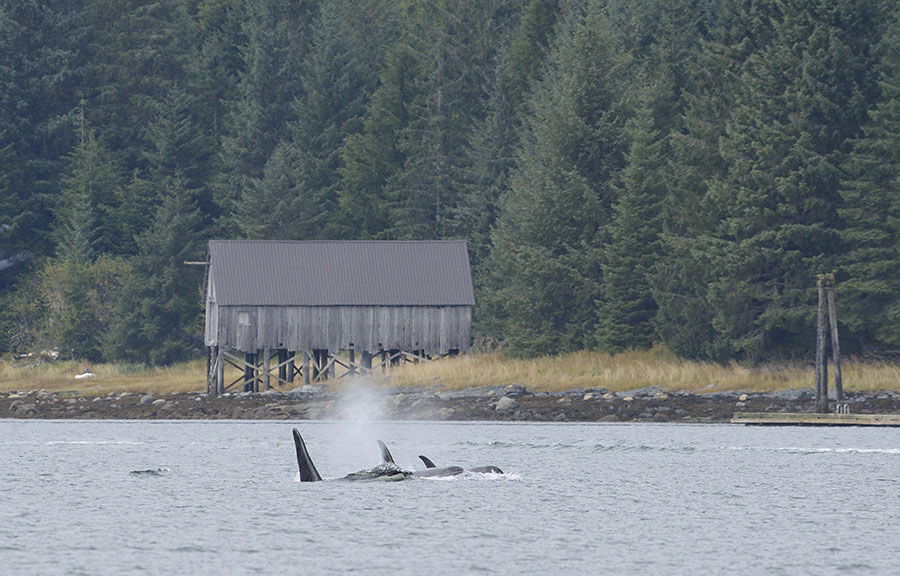 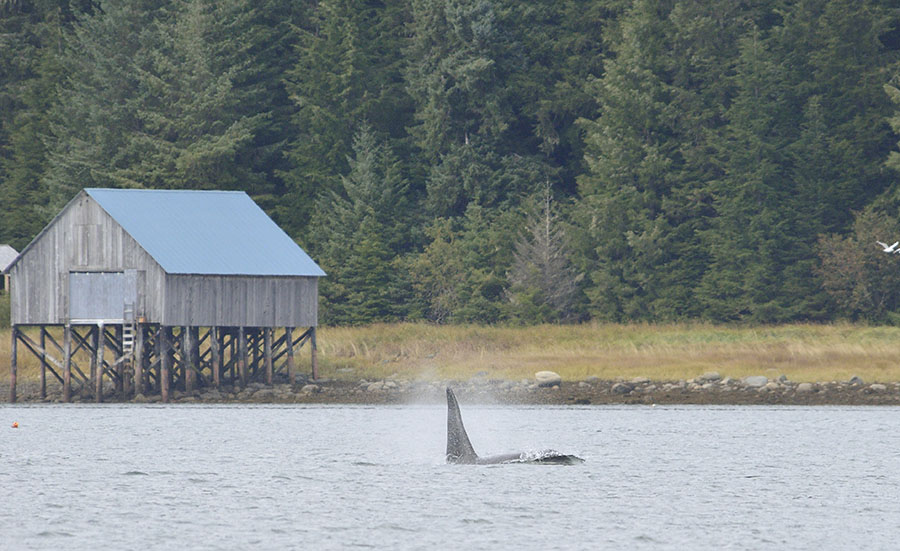 The next evening we were having dinner at a friend’s house, and they reported that the orcas had been in front of their house earlier in the day, indicating that the orcas were going in and out of the Narrows with the tide to feed.  As we set the table for dinner two younger male deer had a jousting match in their front yard, one of them with an antler already broken from rutting fights. 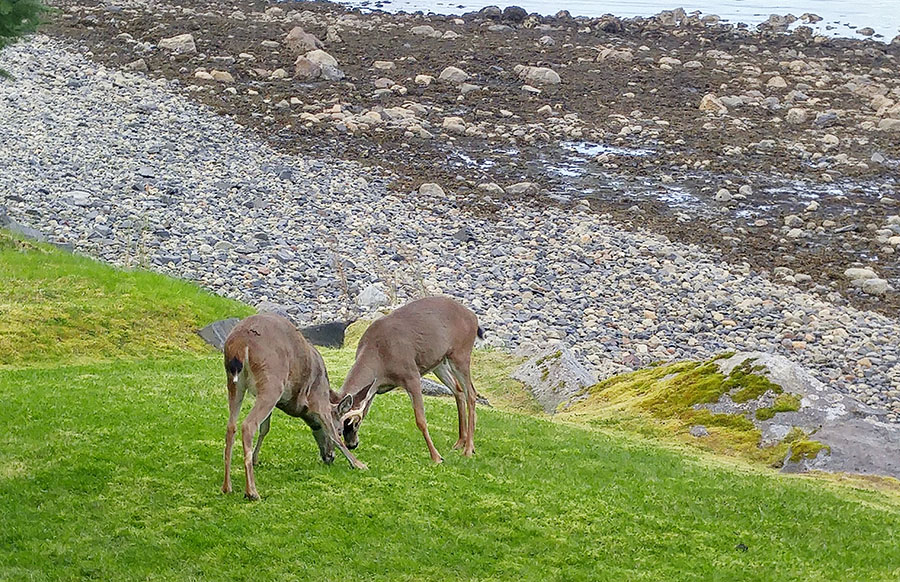