Wiggling around small islands, rocks and reefs, we continued south down the coast of Baranof Island.  Each anchorage had its own charms, but the best part is that we had them all to ourselves.  In the upper section we were just a few hundred yards from the ocean, but protected from the swell and waves by those small islands and reefs.  The minute the anchor was set I headed out in the kayak to explore – like butter on an english muffin… getting into all the nooks and crannies.

We didn’t see a lot of wildlife in and among the outside islets – mostly just sea otters and lots of good sized starfish, but the kelp was so much fun to play in.  Choosing places to anchor can be tricky – but the secret is to look along the shoreline and look for “signs of distress”.  By that I mean logs, trees, and debris high and dry – flung there by angry seas.  The approach to an anchorage might have lots of big logs up high, but tucked back behind the rocks the shore is clear meaning that the swell and strong winds don’t reach.

The last section of islands that offered us some protection from the open ocean had some interesting narrows to transit.  We were a bit daunted about them, but found that the kelp made it easier to spot the rocks on either side.  This is Second Narrows, and the navigable spot is between the two patches of kelp.  It’s actually a little bigger than it looks, but not by much. 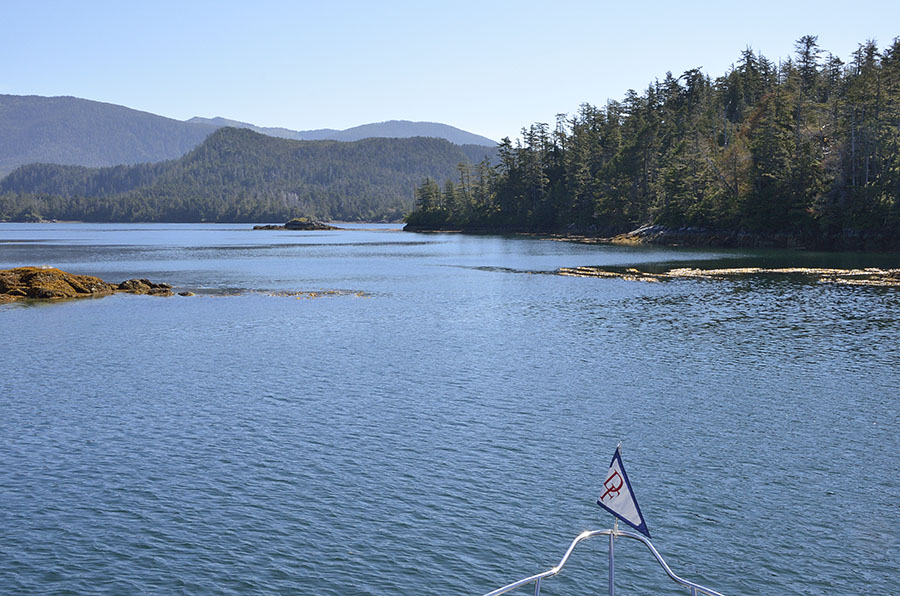 One of our favorite anchorages also had a narrow rocky entrance, well worth some nerves getting in, and the sunshine made it easy to see the rocks. 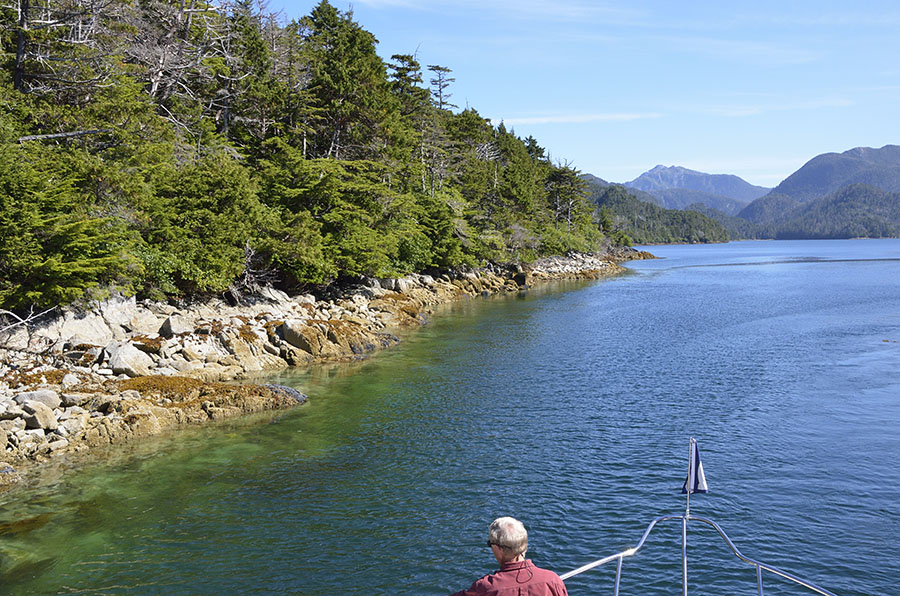 Once inside, the view was sublime. 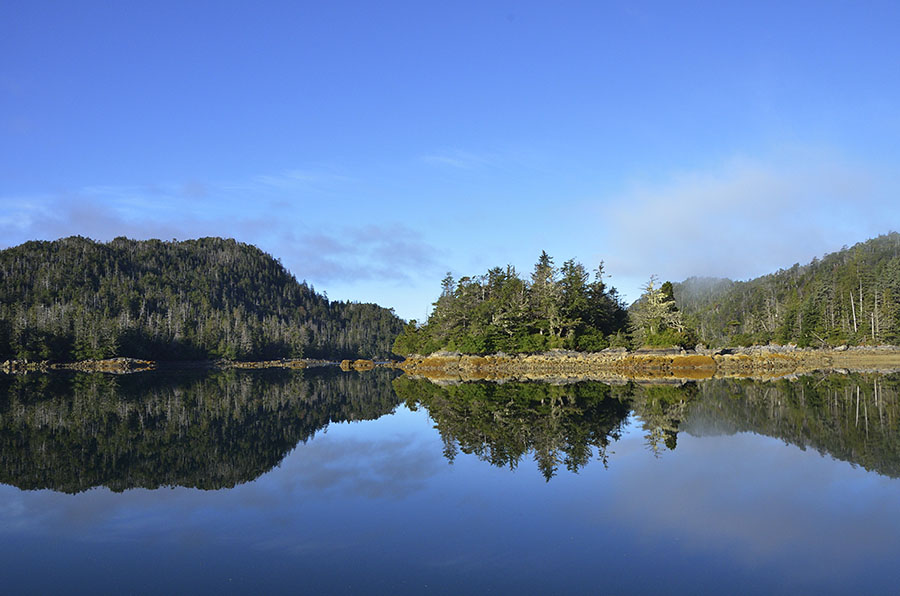 Working our way so far west meant that we could actually see some sunsets, which we miss in Petersburg because of all the tall mountains.  We trade one beautiful thing for another – it’s why we cruise. 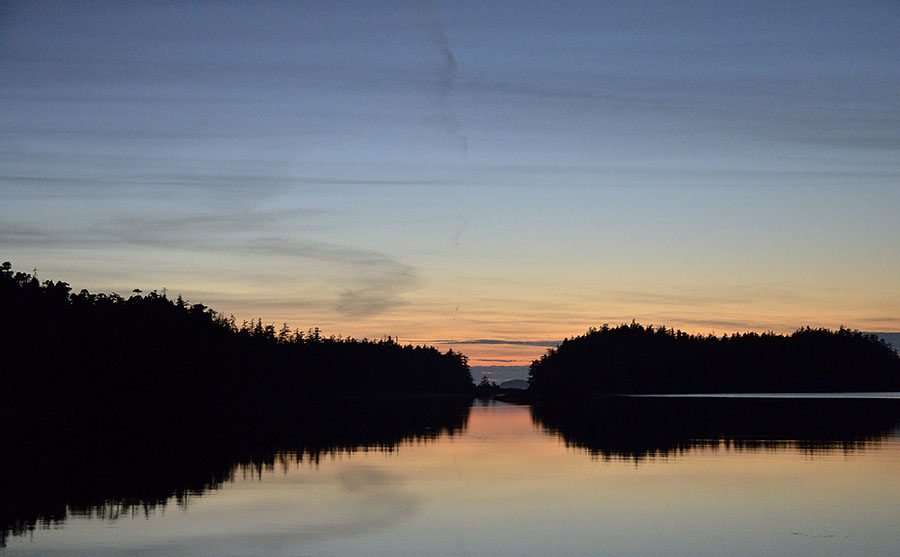 It’s even beautiful on misty morning, though we’ve had far too much gloomy weather this summer… 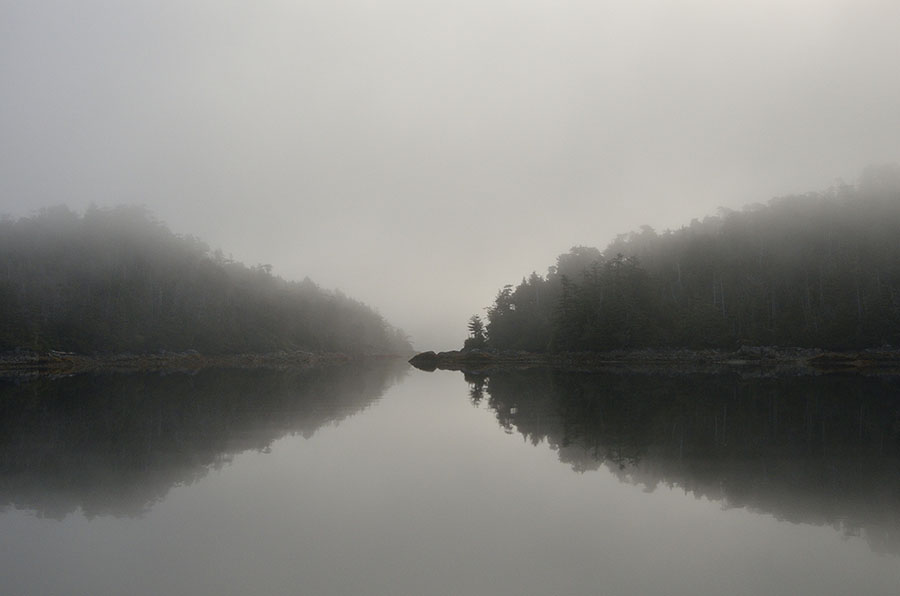 … and we were so happy when the sun came back out and made the landscape colorful again. 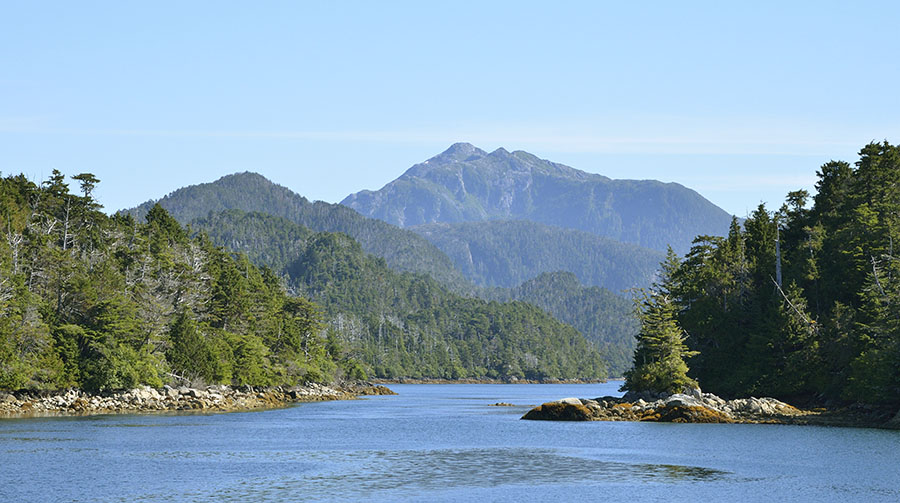 Escaping the protection of the outer islands, we headed out in the ocean on a glorious day. 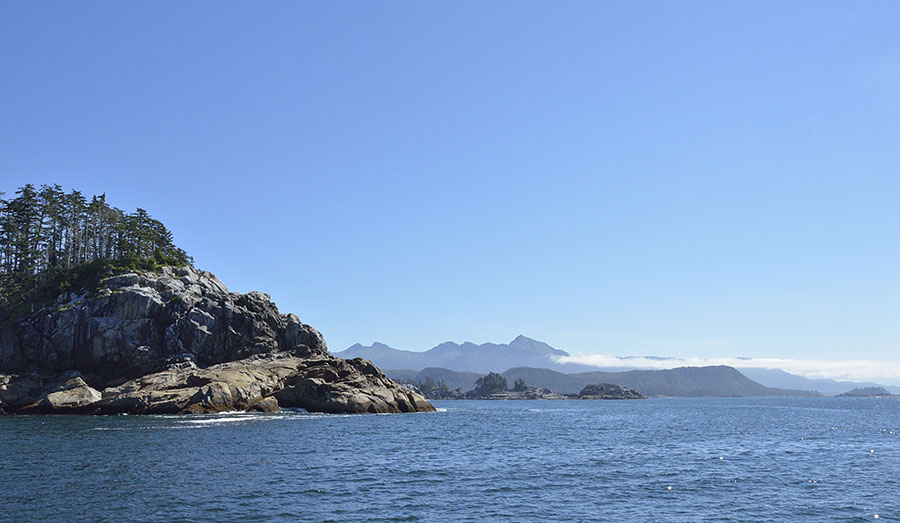 The seas were kind and we explored several gorgeous little anchorages as we ventured further south along Baranof Island’s coast.

With no phone or Internet signal for a couple of weeks, we only had NOAA weather on the VHF radio to track conditions, as well as some regional weather imagery that we can get through the sat phone or the weather fax.  Jim is a very good weather guy, and I never second-guess his recommendations to go or stay.  Unfortunately, all good things come to an end, and that meant our 10 day stretch of brilliant sunshine, blue skies and calm seas was coming to an end.  We reached Whale Bay hoping to spend some days exploring it, but the conditions were turning ugly and we ducked into Still Harbor at the mouth of the bay.  The harbor is over a mile long, but down at the end the anchorage lives up to its name – it was a mill pond while the ocean grew grumpy just outside. 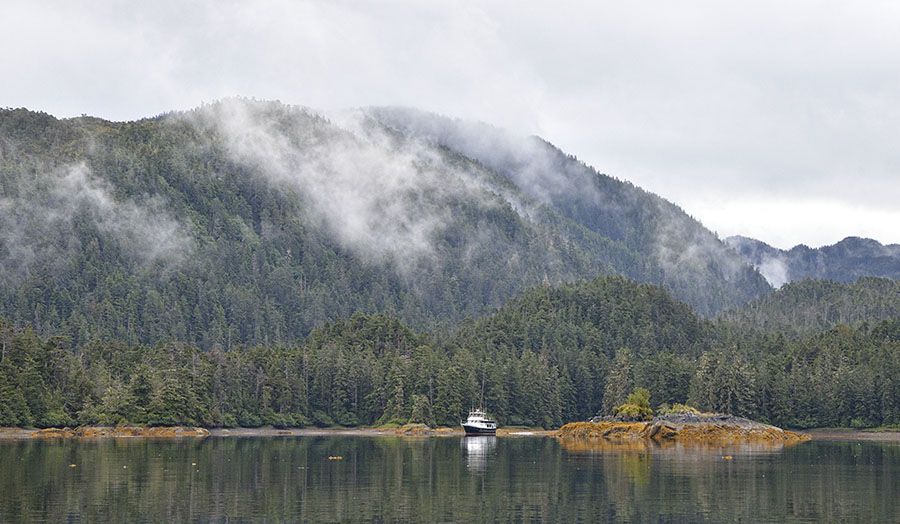 Of course I had to explore by kayak, finding several deer on the beach, lots of blue herons (which seem incongruous in such a rugged place), oystercatchers, plovers, and sea birds. 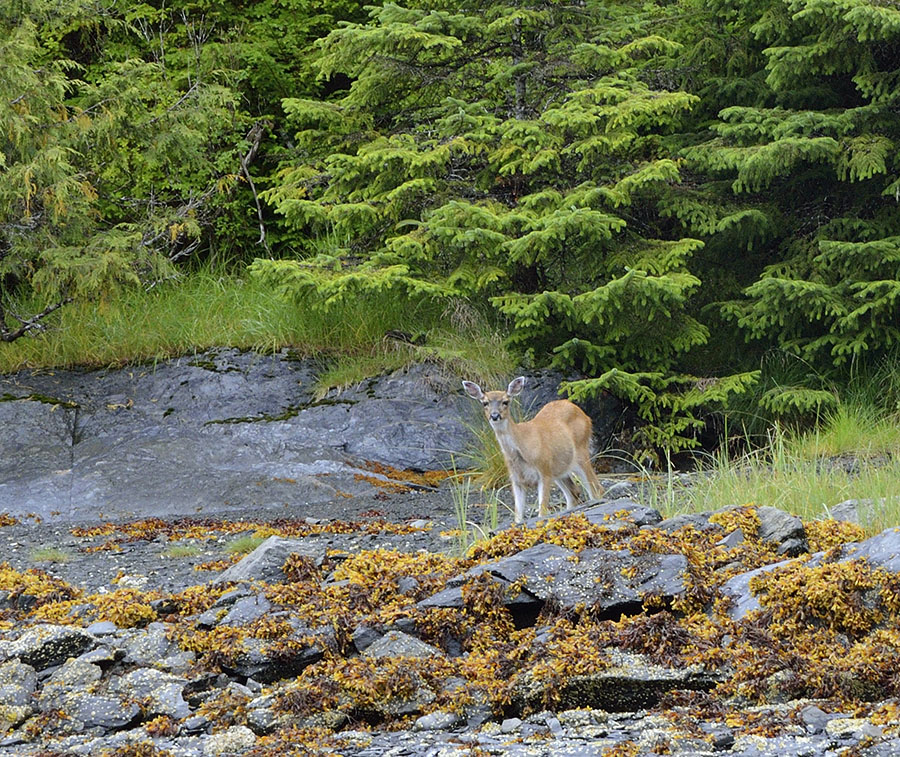 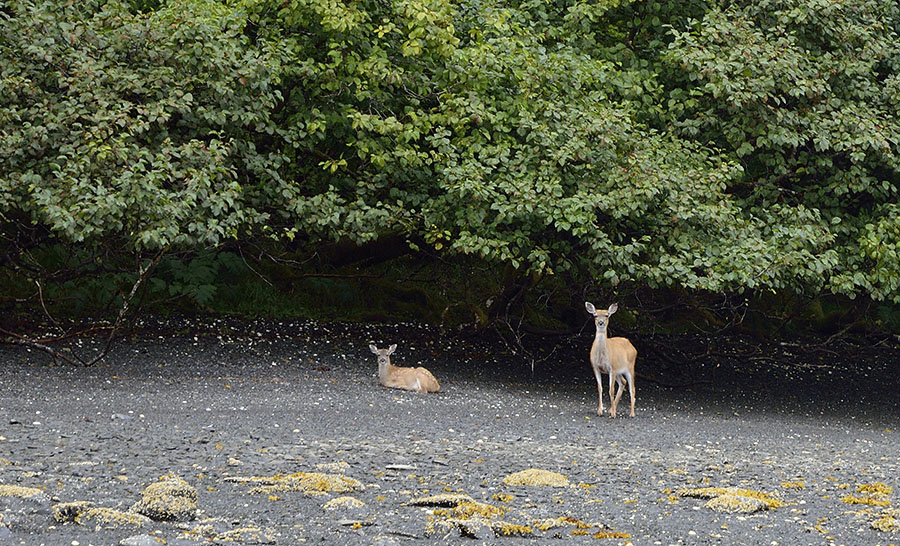 Seas were getting over 10′, but once again the rock reefs and big kelp patches did a lot to knock down the waves. 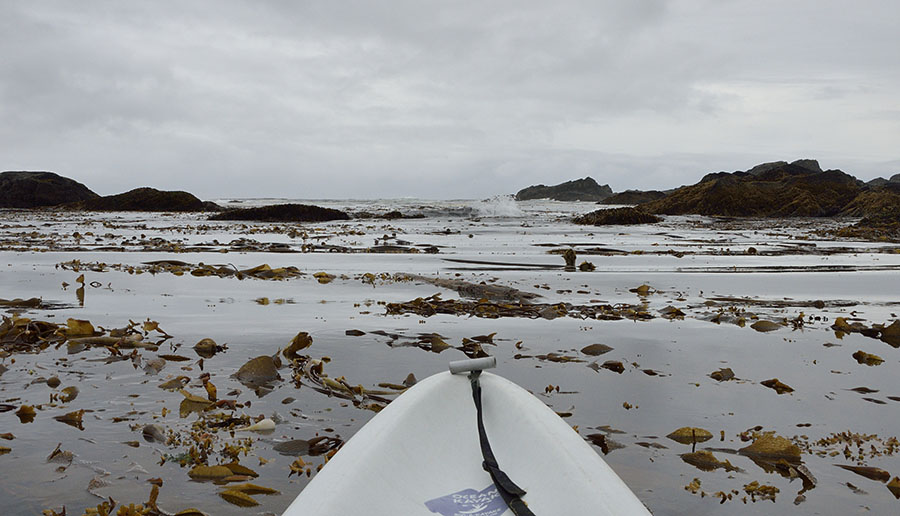 I got closer to the harbor entrance to gauge the conditions, but it was hard to take photographs or video in the rain and the ocean swell.  It didn’t look nice out there, which matched the forecast, so we hunkered down for five rainy days hoping conditions would improve.  Finally the seas settled down to 7-8′ for a day before the forecast said they were getting bigger again, and would stay that way for a while.  We either had to leave or stay at least another week and hope the weather would ease.  We chose to leave and abandon our plans to see the rest of Baranof’s south coast, instead heading north and back to the protection of the outer reefs and small islands.

Between our Naiad stabilizers and the new bulbous bow, we had a lumpy but decent ride in the bigger seas.  It’s not our favorite thing, and one of the pantry cabinets spilled some things on the deck until we could lash it closed, but that was the extent of the excitement.  We ran almost all the way back to Sitka since part of the route had short exposures to the sea – better at 7′ than 11’+.  We took a day to chill out and rest, then headed back to Sitka for a couple of days.