The bears are waiting for the salmon to start heading upstream.  The fish are getting closer, they’ve been jumping all over the place, they’re gathering near streams… the time for the bear’s feast is almost at hand.  We anchored near a good salmon stream with a small waterfall on our way to Sitka to check out the action, and I spent three sessions sitting on cold rocks watching for bears.  The action was more sporadic this time – we’ve been here other years when the salmon are running and have watched 9 bears fishing and eating in the stream at the same time.  I think it will be another week or so until the stream will be full of happy bears. 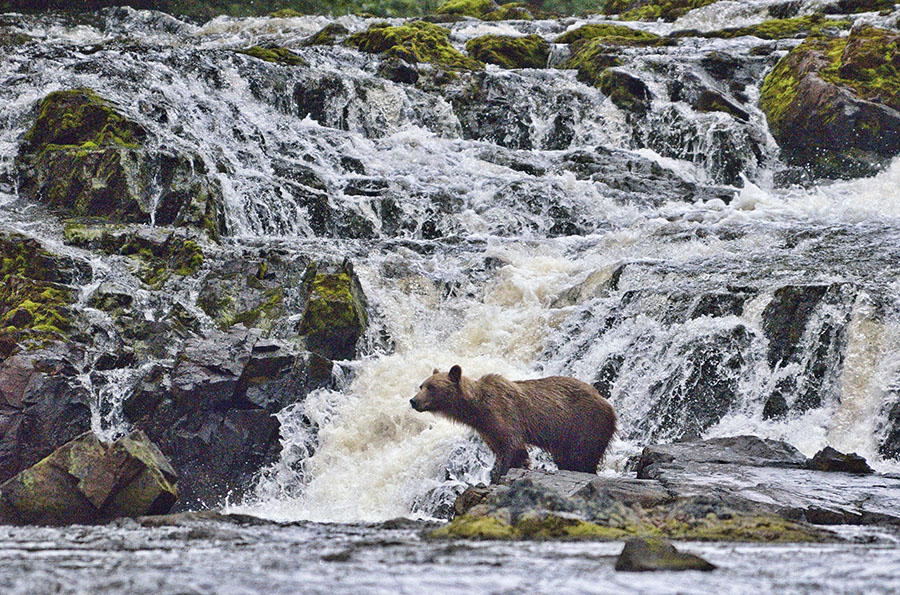 Hopeful bears were making frequent visits to the stream to look for fish.  With the unusually cool and very wet summer we’ve been having, the berries are late which means that the bears are even more ready for the fish to arrive – they only have a month or two to fatten up for the long winter. 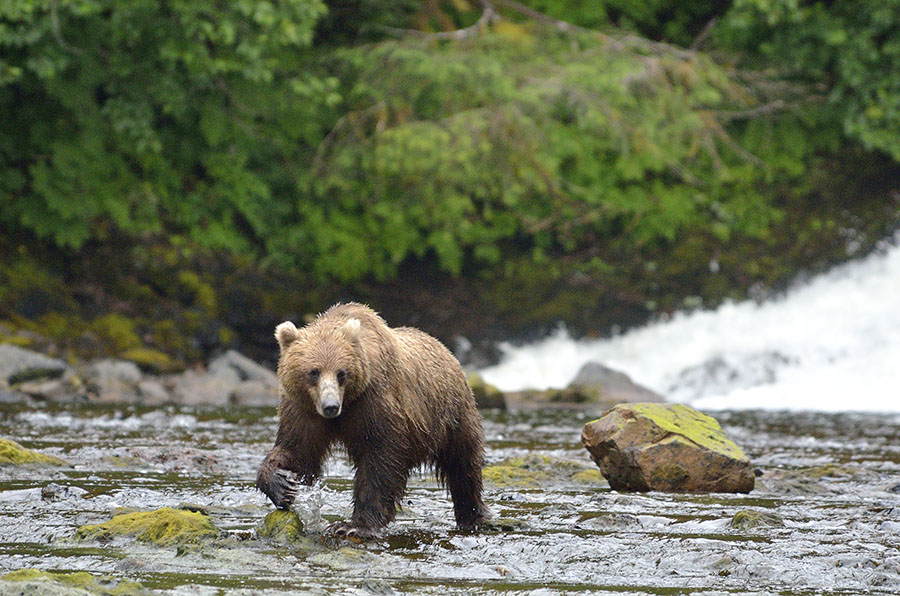 As the tide falls the fish that have moved up stream get stranded in the shallows, making it easier for bears to catch them.  A sow and her two first year cubs came along… 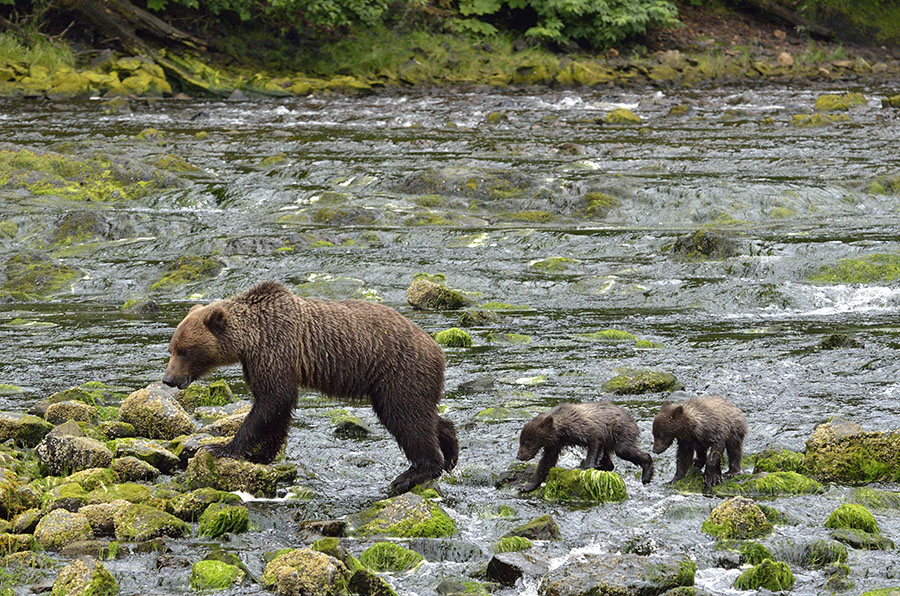 …and I can see the “tough love” since momma expected the cubs to follow her across the stream, and sometimes the water was a little deep for a little cub. 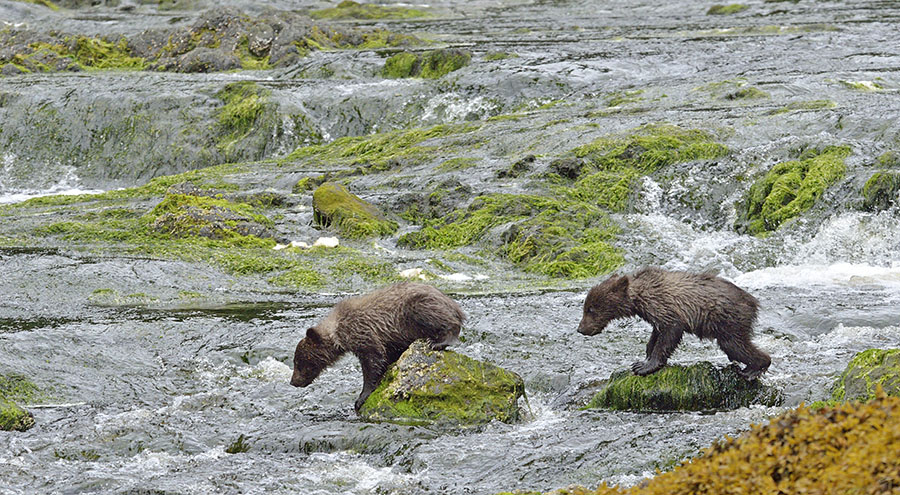 First year cubs were born in February-March, and they will stay with their mother until just before their third summer when she will kick them out on their own so she can mate again.  We spotted a few of these younger bears (“teenagers”) – they’re not full grown yet, and siblings often stay together as they begin to learn to live on their own. 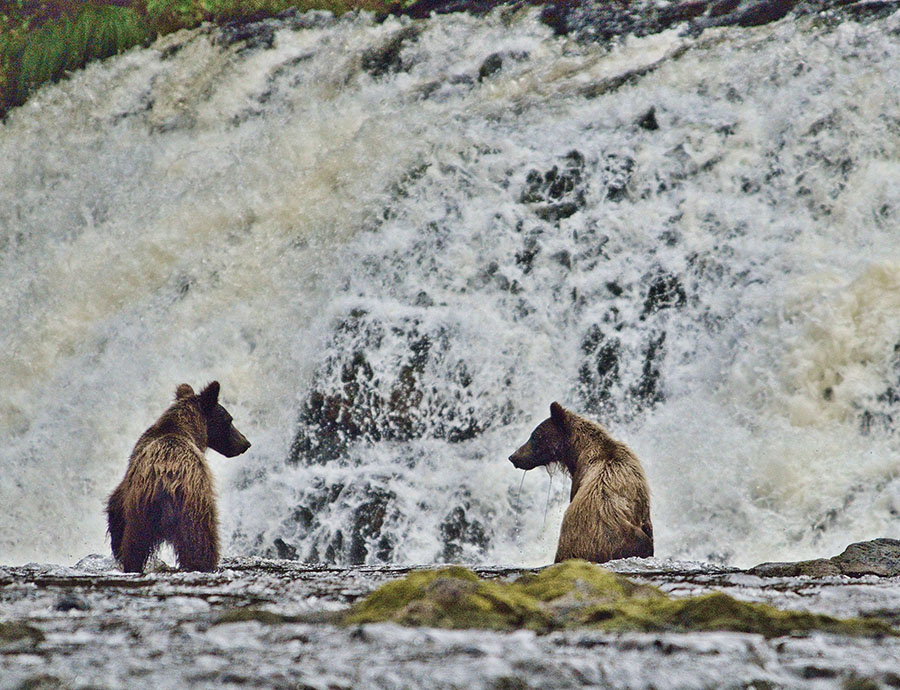 Most of the time the bears didn’t stay around very long.  They surveyed different spots in the stream and meandered back into the woods.  One younger bear appeared and gave us a great show as he was determined to catch a fish, no matter what it took. 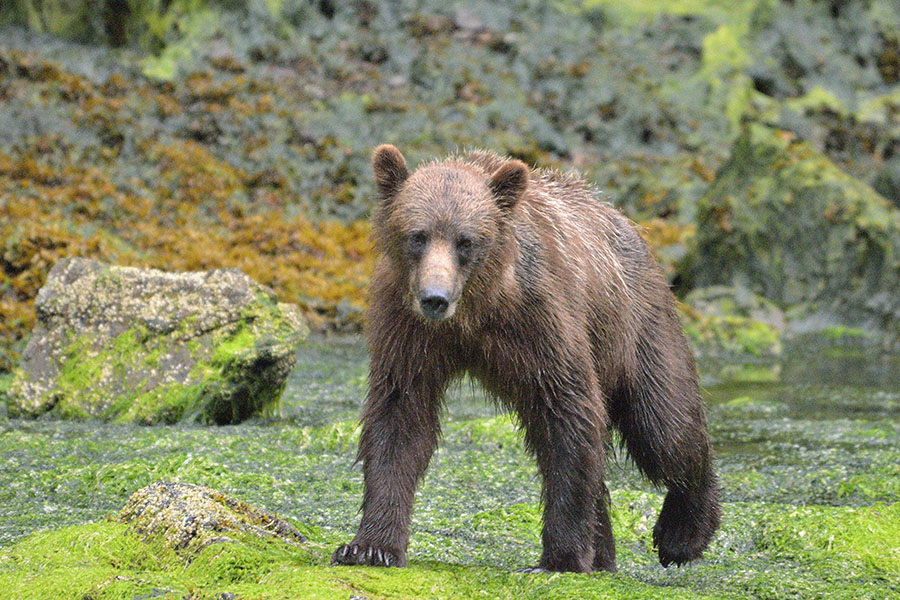 He chased after every cagey fish, running and splashing to and fro.  He found a deeper spot and stuck his head underwater to look several times… 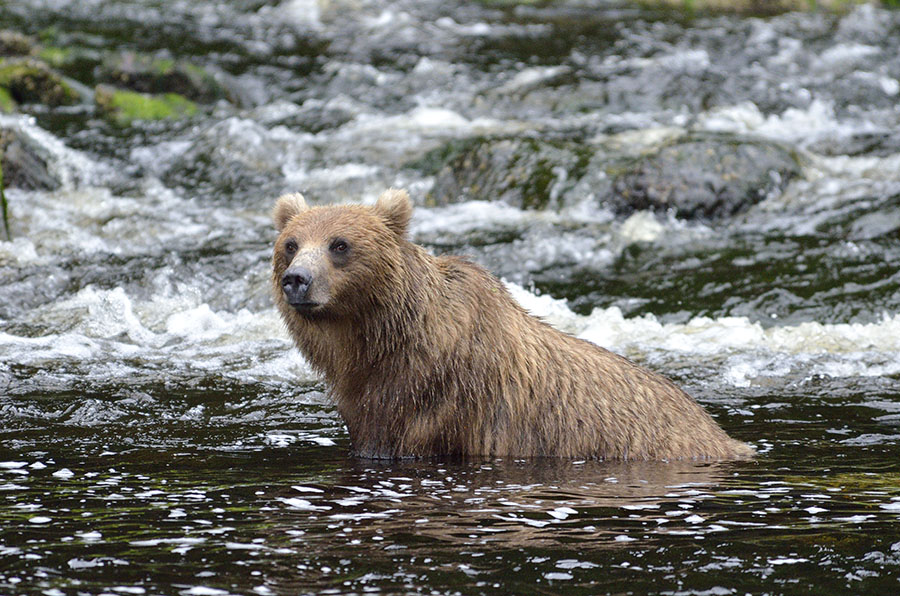 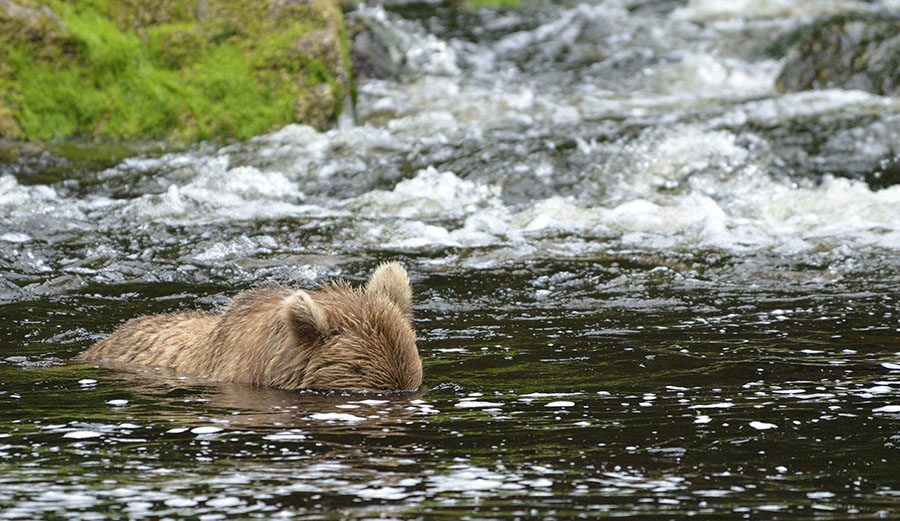 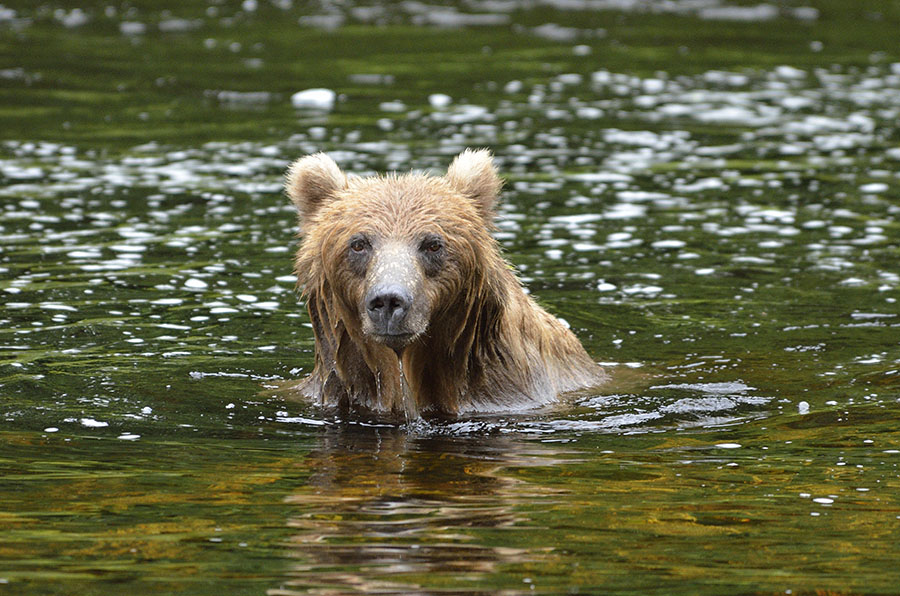 We could really see his muscles and body in need of fattening as he climbed out of the water, before he shook off like a dog.  Finally he caught a nice big salmon – the only successful bear we saw. 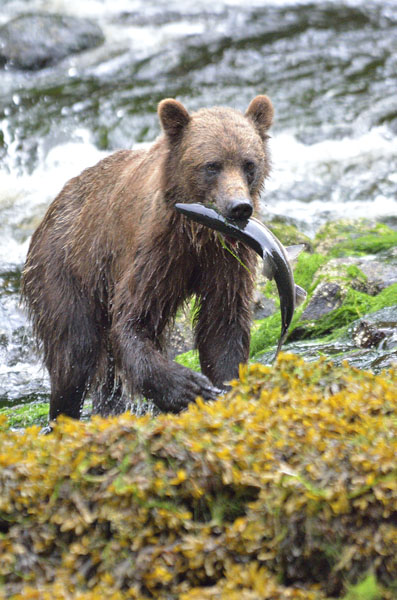 A kingfisher managed to catch some small fish, but they move so fast that they’re almost impossible to catch in flight.  I got lucky, though with the low light and high ISO it’s not the best photo. 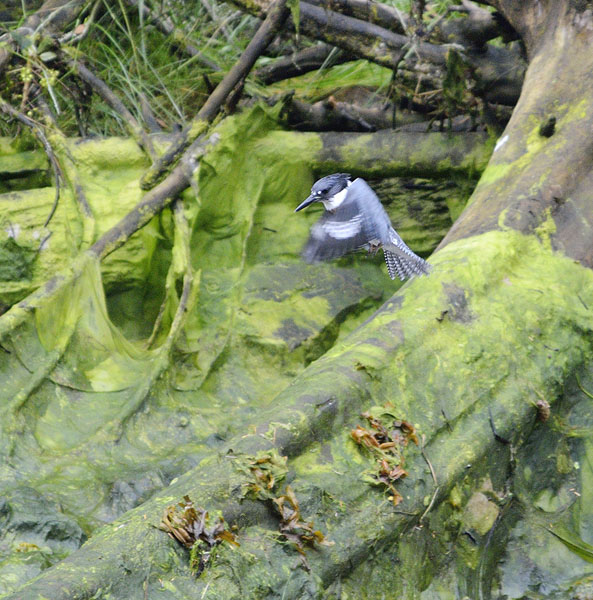 One afternoon Jim was back on ADVENTURES and I had been sitting on the rocks for a few hours.  Just as I was thinking about getting in the kayak to head back to the boat the bear action got lively.  I was watching a pair of “teenager” bears on the beach in one direction when another bear came out of the woods by the stream to eat grass in the other direction.  It was a bit like watching a tennis match, though the grass bear gave up and disappeared back into the forest.  Jim called me on the radio to tell me that a sow and two cubs were around the corner on the beach, heading my way.  As soon as the “teens” saw the sow coming, they bolted into the trees. 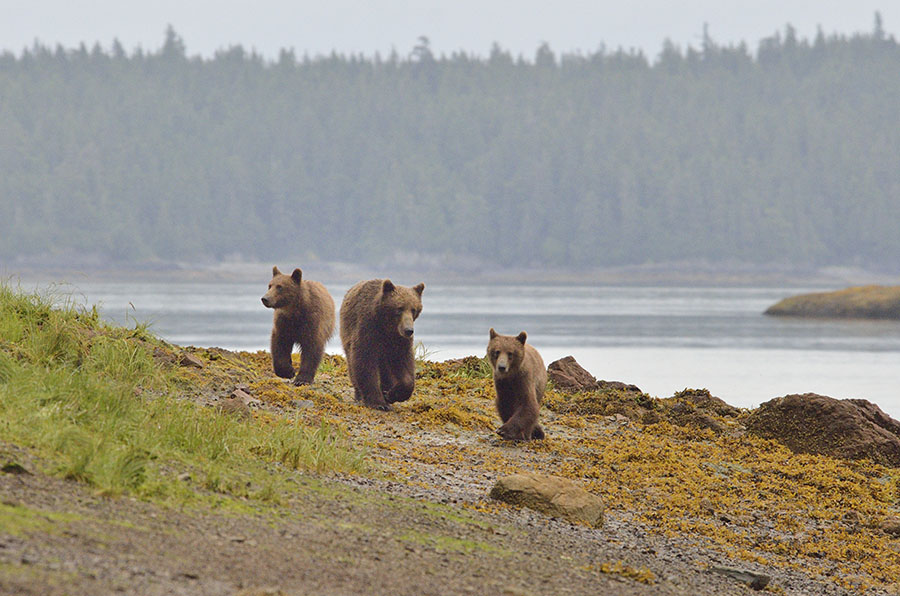 These are second year cubs, a bit more independent from their mother.  The sow walked along the creek edge, but the cubs were distracted by my kayak. 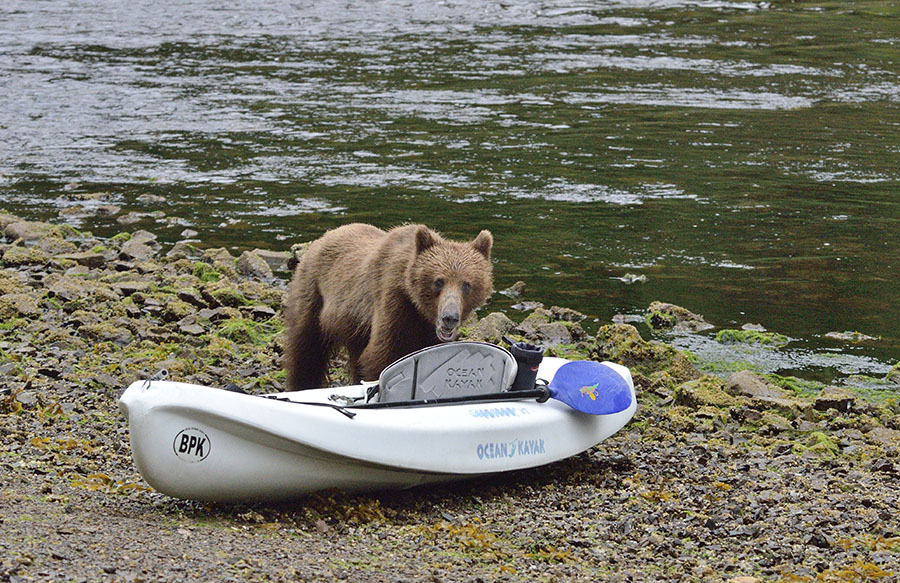 The first cub stopped to give it a sniff, rubbed his head on the seat back and gently “tasted” the plastic boat before he wandered off to catch up with momma.  The second cub came along and did the same – thank goodness I’ve never had any food or fish in the boat.  But that second cub had a look in his eye… 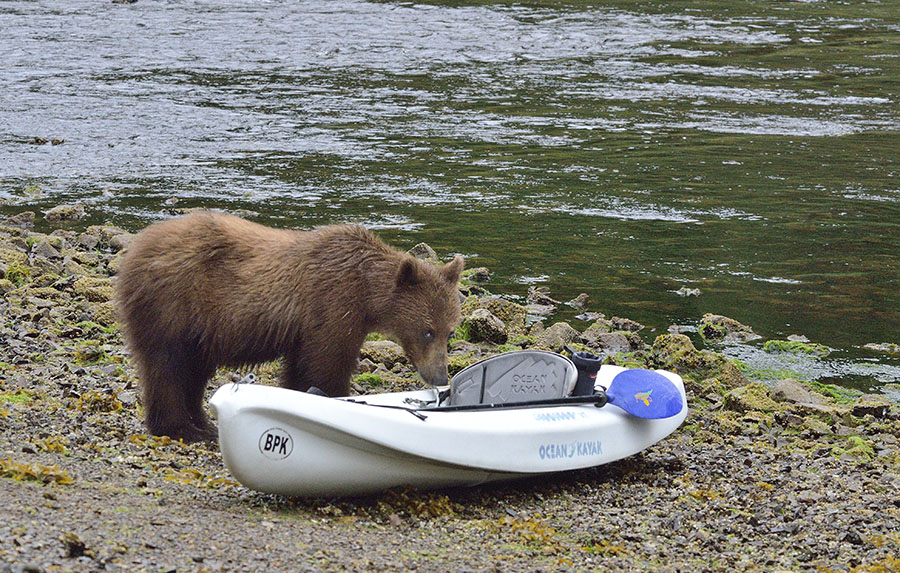 …it was a devilish look!  Sure enough, he grabbed the seat back and gave it a little shake just to be a brat.  No harm was done, thank goodness.  I had my bear spray in my hand, just in case.  But momma was marching along and he had to scamper to catch up. 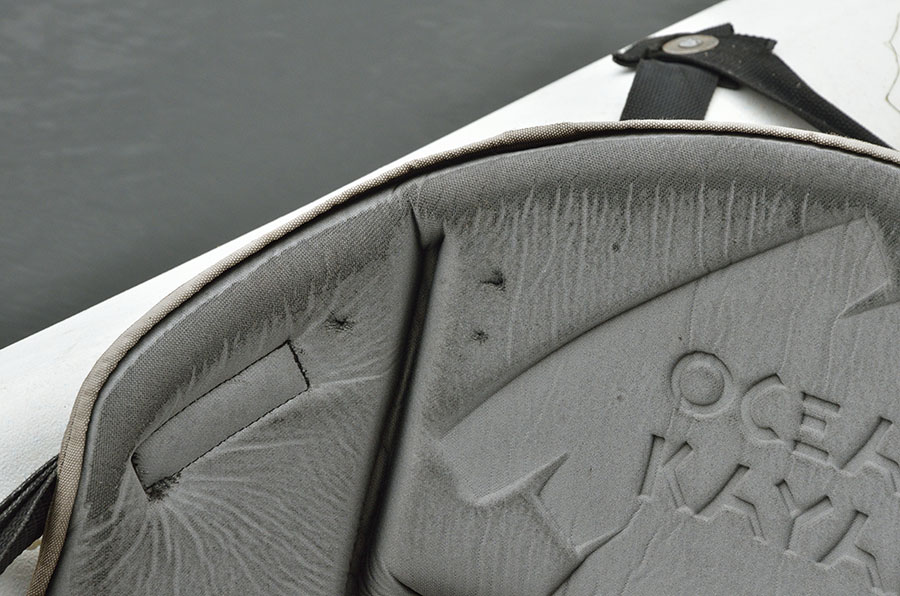 It was an exciting end to a long afternoon – a reminder that it’s always worthwhile to sit and wait, even on cold rocks, dressed in rain gear and holding a heavy camera.  Patience sometimes pays off.  Sometimes you can wait for hours and nothing happens – don’t ask me how I know that.  But when it does… it’s priceless. 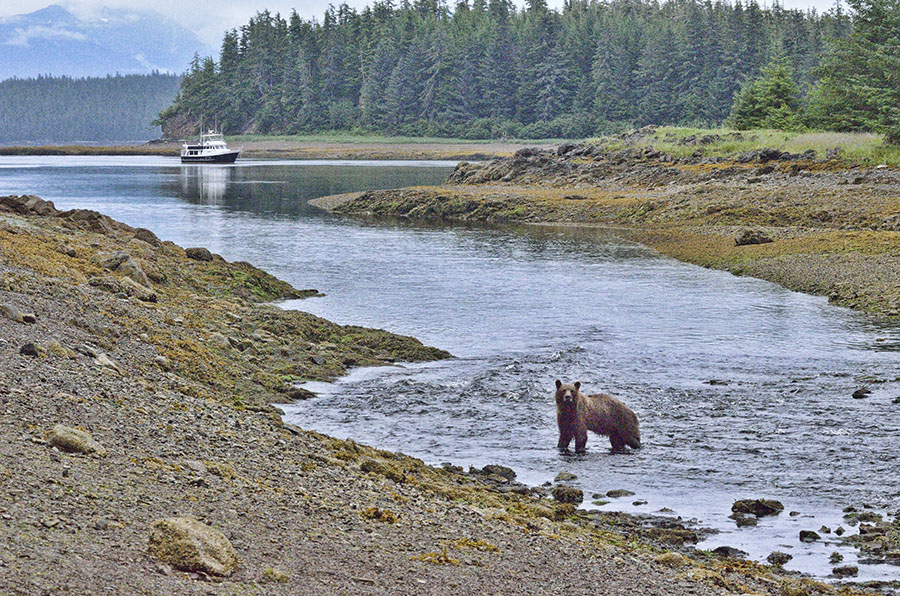 3 thoughts on “The Bears are Waiting”