We’ve ended up stopping in Juneau a few times so far this summer, and the stops have been event-ful in various ways.  There are a lot of eagles zooming over the harbor all the time, four well-fed harbor seals, a large humpback that occasionally dives between the docks… plus the view in Auke Bay is pretty nice too. 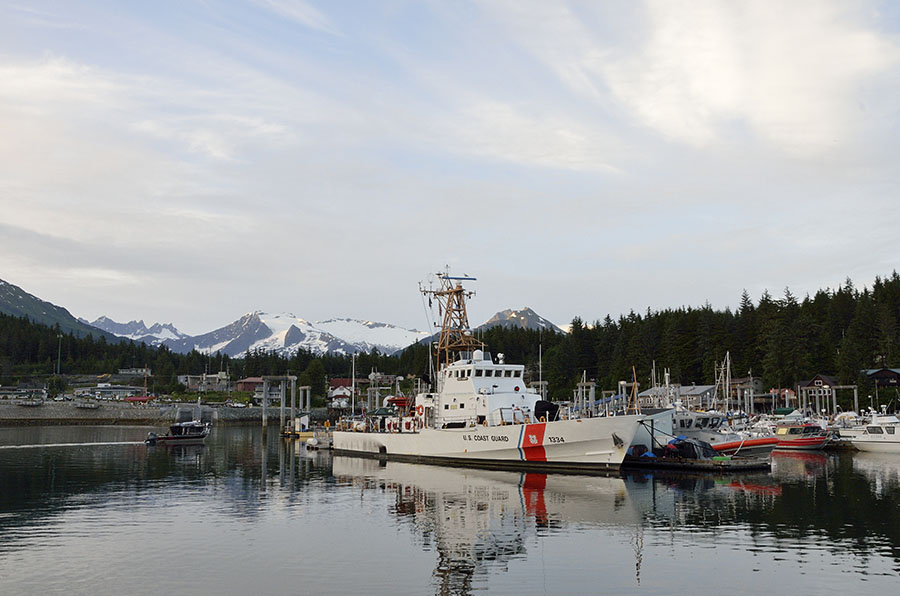 The first bit of excitement was a boat fire on the next dock over.  We never heard the kerfuffle and neither did friends on a boat even closer to the action.  Fortunately a neighbor was sleeping aboard his aluminum boat and woke up when his hull got hot.  He was able to rescue the man aboard the burning boat, and he untied a few of the surrounding boats to get them away from the flames – action that saved a lot of property damage and prevented the fire from spreading.  The boat sank in 110′ of water at the dock, and all that was left was a fuel slick and some charred bits. 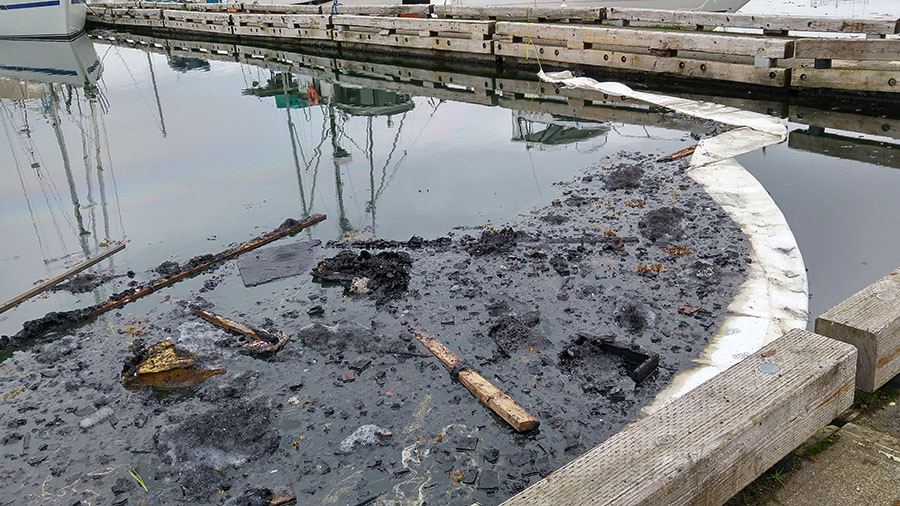 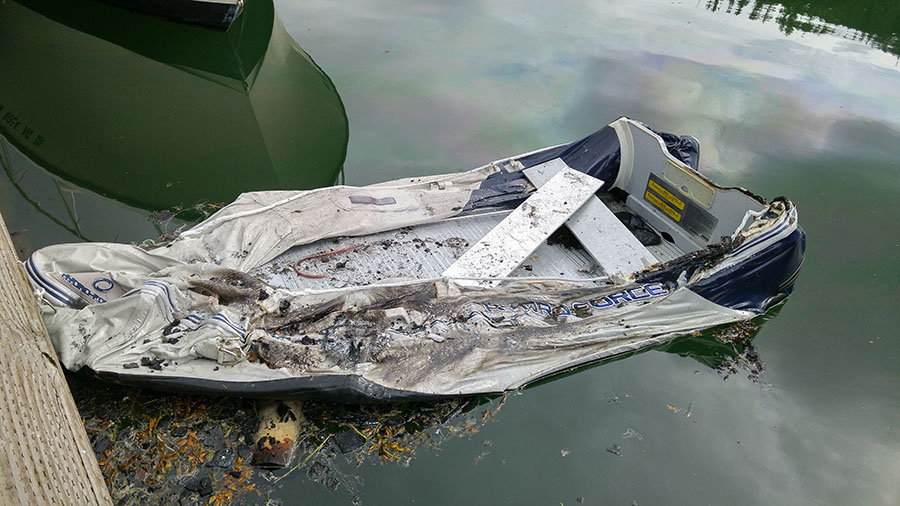 In the midst of all this the harbor discovered a leak in the water pipe that serves the docks, so they shut the water down at the same time that we happened to be almost out of water in our tanks.

The harbor brought in a diving barge to assess the wreckage since arson was suspected.  The boat owner’s truck had been set ablaze in the harbor parking lot two weeks earlier! 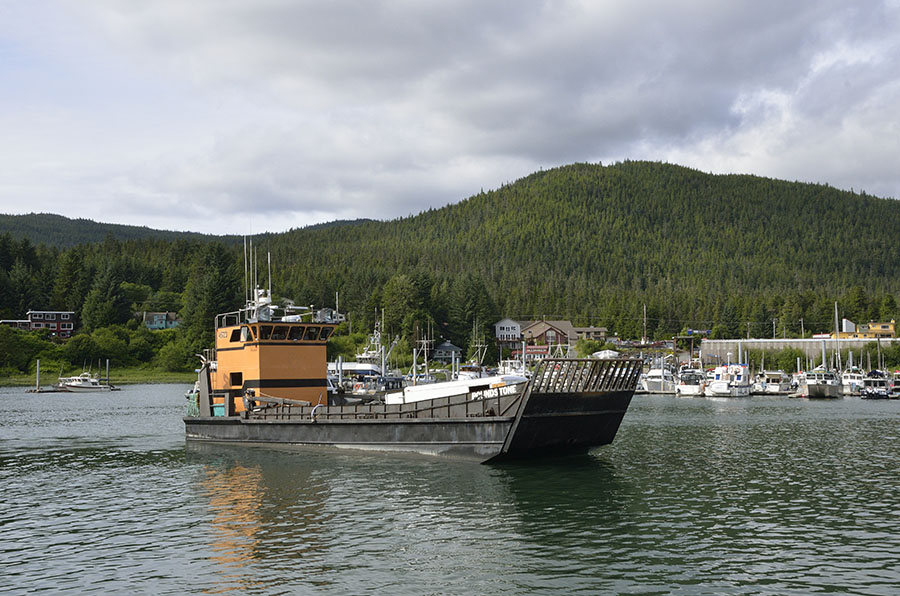 The divers did their assessment and rigged a lifting harness, and then the huge crane barge came in to lift the wreckage.  I was very impressed by the skill of the tug skipper to bring that big beastie into the narrow fairway and maneuver it into place. 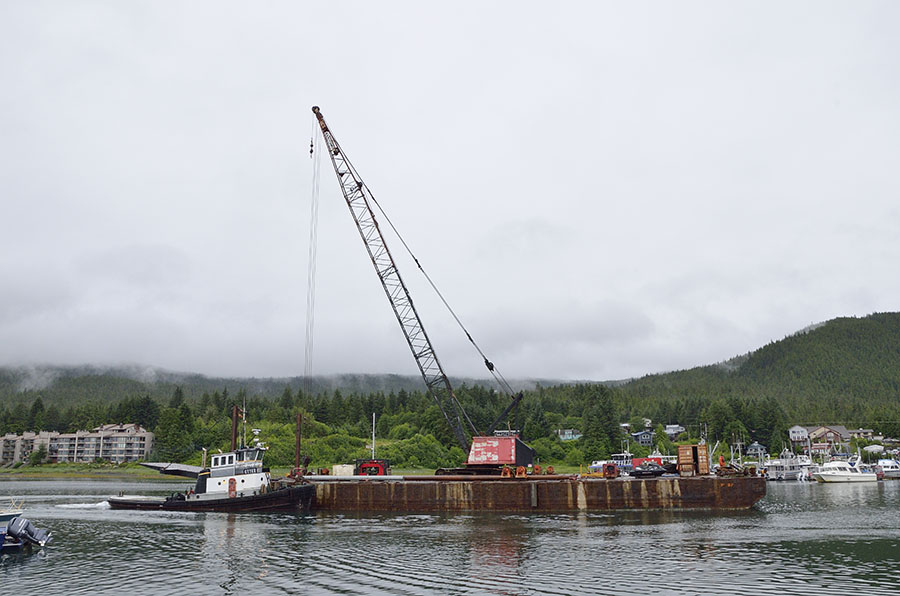 A few days later the mess was cleaned up, the barges left, and the water was back on – whew!  In the meantime, Jim and I took advantage of being in The Big City to do some shopping at Costco and Fred Meyer, and to explore a few places we hadn’t been to downtown yet.  We enjoyed the smaller City Museum, and found the tiny Russian Orthodox Church just as the docent was giving a tour. 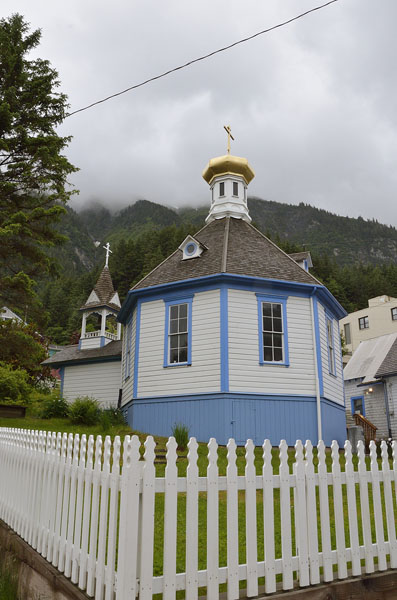 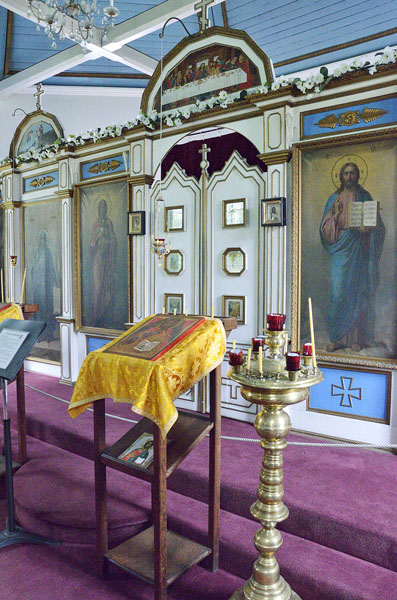 As I’ve explained in earlier posts, Russian Orthodox is the dominant religion of the Tlingit people, so it’s common to find these churches in many of the communities, particularly those with bigger native populations.  They are very beautiful, no matter the size.  Even some of the artwork in the State Museum reflects the strong Russian influence in our area. 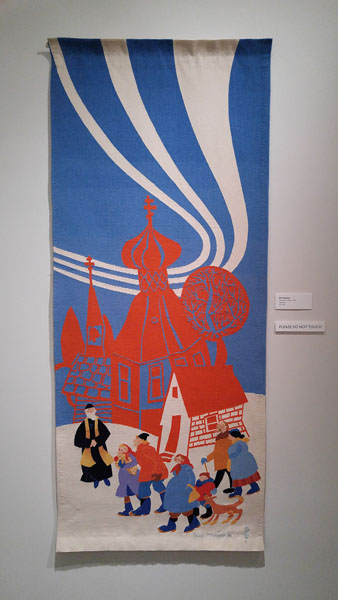 We started having trouble with the generator – which we use to charge our batteries so we can stay anchored out as long as we like – so we headed back to Juneau to get some shore power while we (mostly the talented Jim) sorted out the gen.  We ran all over town getting some parts to replace a few things that were suspect, and we finally discovered that it was the exhaust elbow.  Fortunately we happened to have a spare aboard (they are no longer available and next time we’ll have to get one fabricated for us – costing lots of time and $$), and we visited or called every plumbing or marine shop in town to find a special fitting.  We found enough parts to make a good temporary repair and proper parts are in the mail, which we’ll pick up in a few weeks when we get to Sitka.

While we worked on the gen and a few other projects, we watched the mass influx of gillnet boats followed shortly by the big purse seiners.  Boats were rafted 3 and 4 deep, with the big seiners dwarfing the smaller gillnetters and even a 30′ recreational boat in one case. 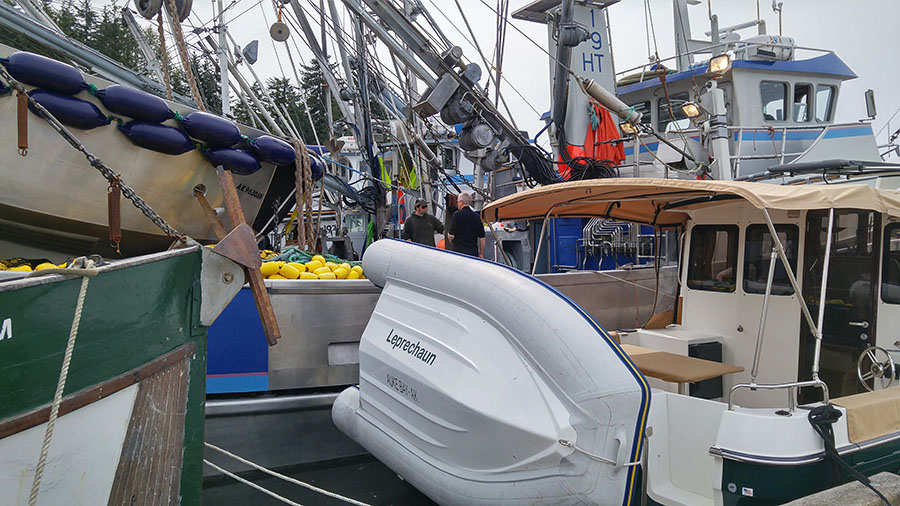 The harbor was packed, and we spotted a number of Petersburg boats that we know. 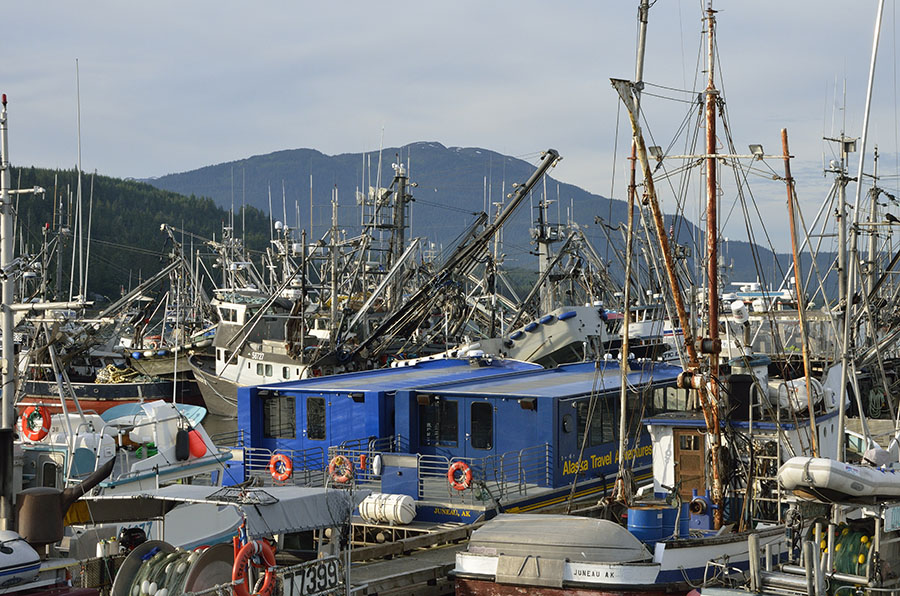 A few days later the seiners headed back out to fish, and we spotted a mass of them fishing right off the shore just north of town – it was crazy! 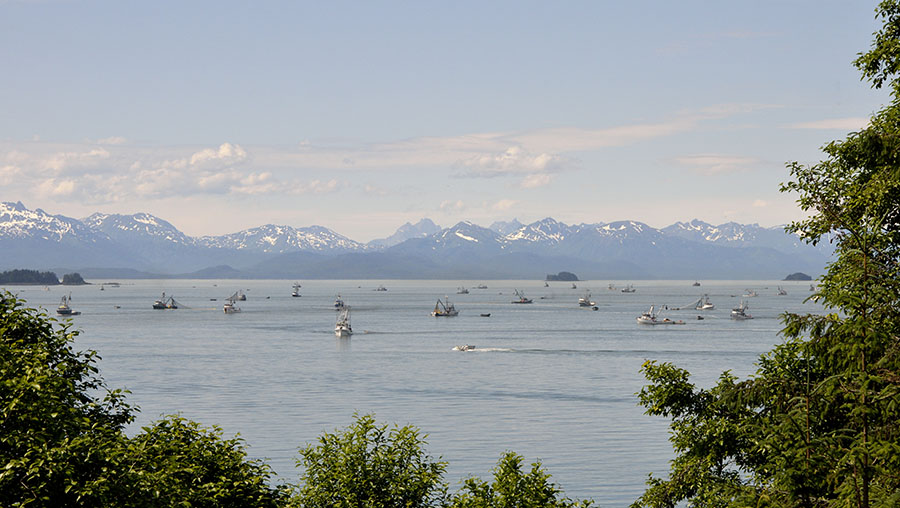 We did get to have some fun while in town besides just shopping and fixing things.  We visited the Mendenhall Glacier, which is not far from downtown. 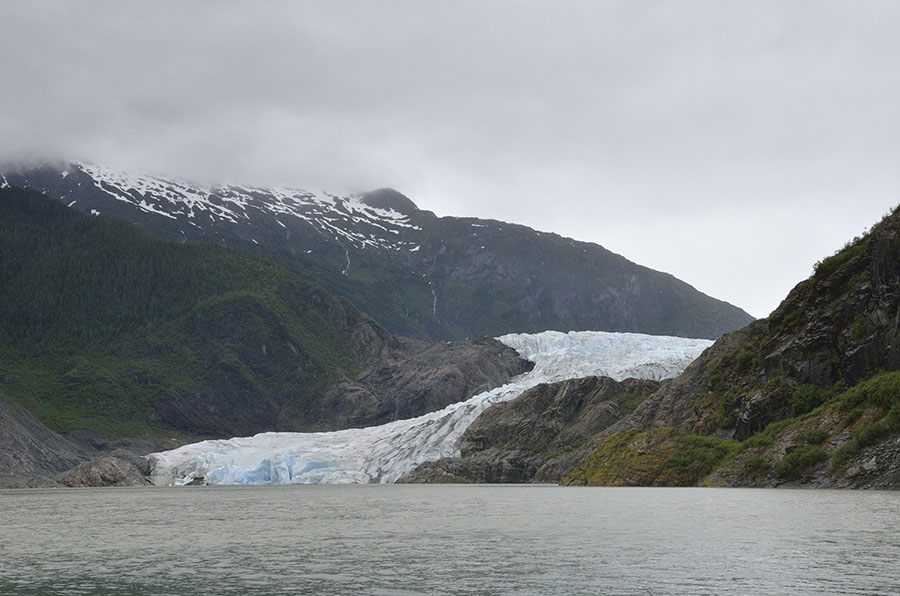 There were plenty of small icebergs floating in the lake to see, lots of nesting arctic terns, and the big roaring waterfall. 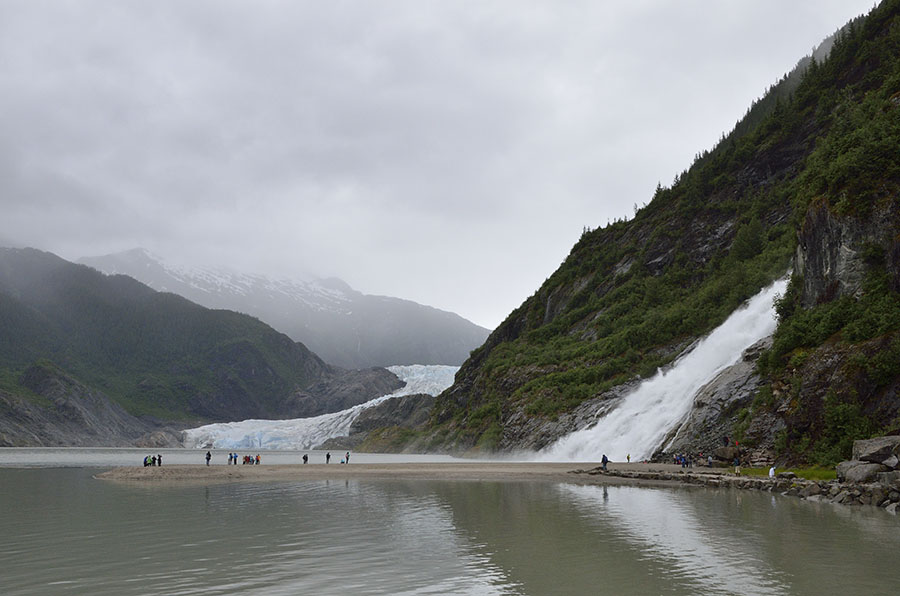 We did some hiking, exploring the river from one of the other nearby glaciers (the Herbert), and watching as some local gals in bikinis played in the frigid water. 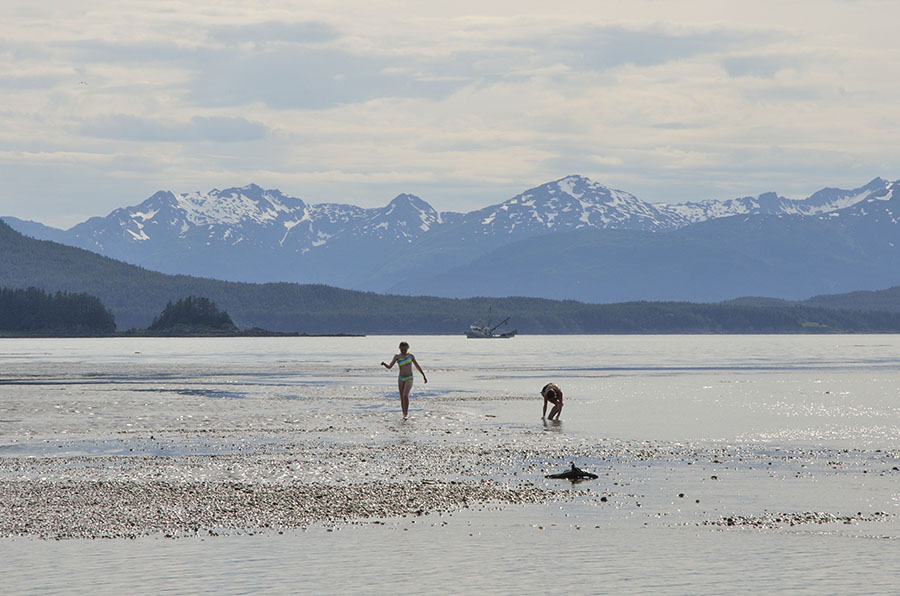 We walked through wooded trails… 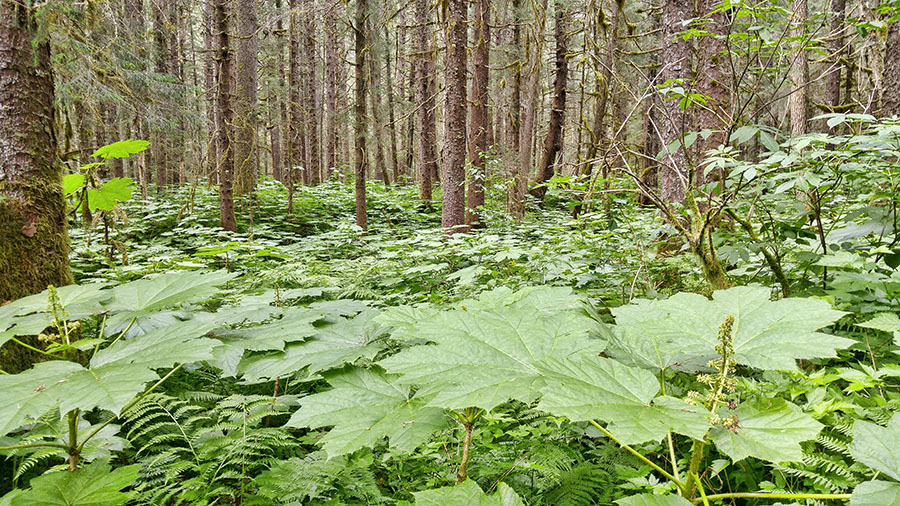 …and enjoyed all the wildflowers like lupine, fireweed, wild roses and wild iris. 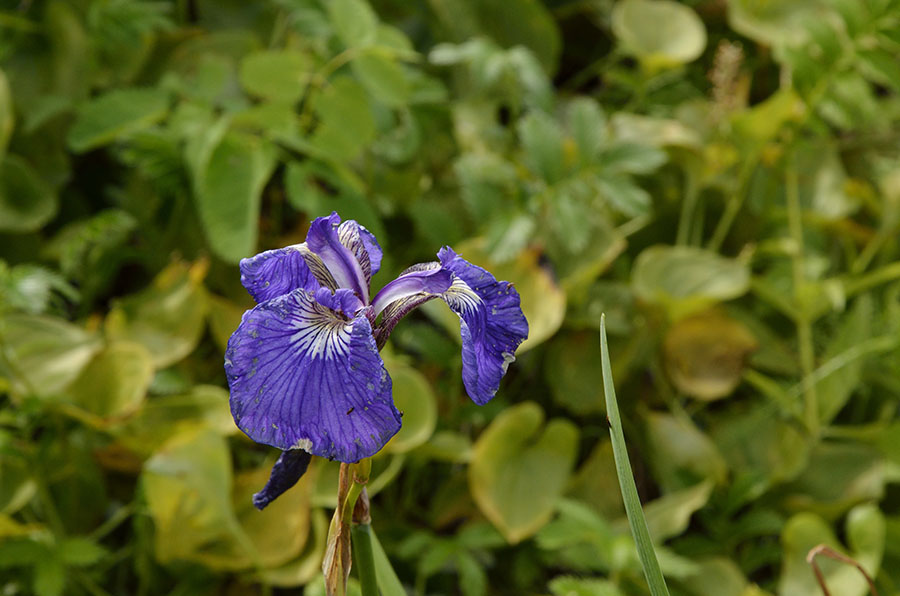 We checked out a birding trail near the airport that meanders along some marshes, and were rewarded with lots of dowitchers and yellowlegs. 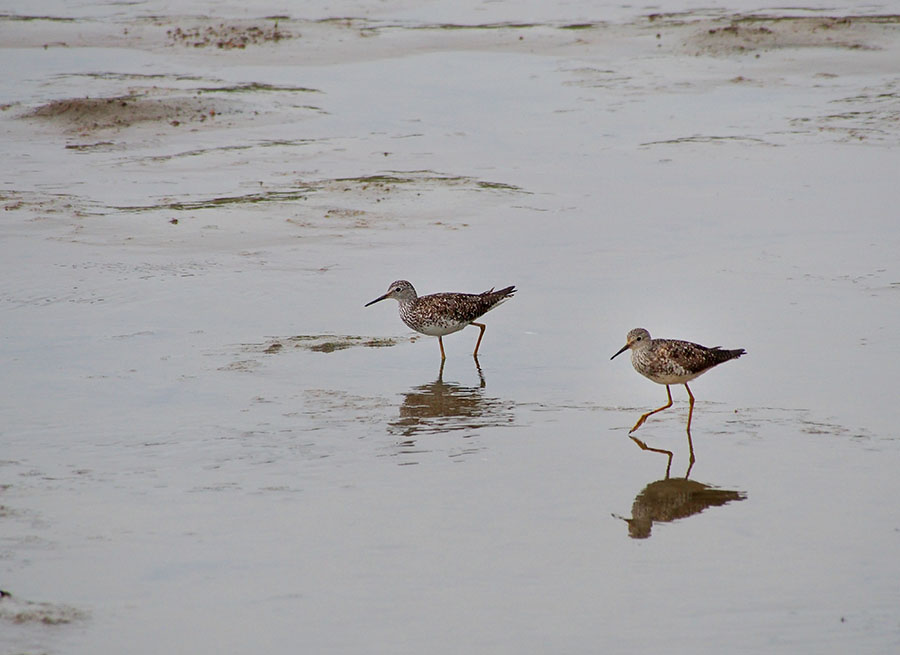 We’re not big fans of spending time in The Big City, but we got a lot accomplished, witnessed some interesting events, and had a good time.  But now we’re more than ready to be back in the wild places again.