The weather never settled enough for us to explore the outside (ocean) side of Chichagof Island and we didn’t want to sit around and wait any longer so we headed east and turned into Excursion Inlet – a very pretty fjord next to Glacier Bay National Park.  Excursion Inlet is long and narrow, with a cannery that’s quite busy in the summer months. 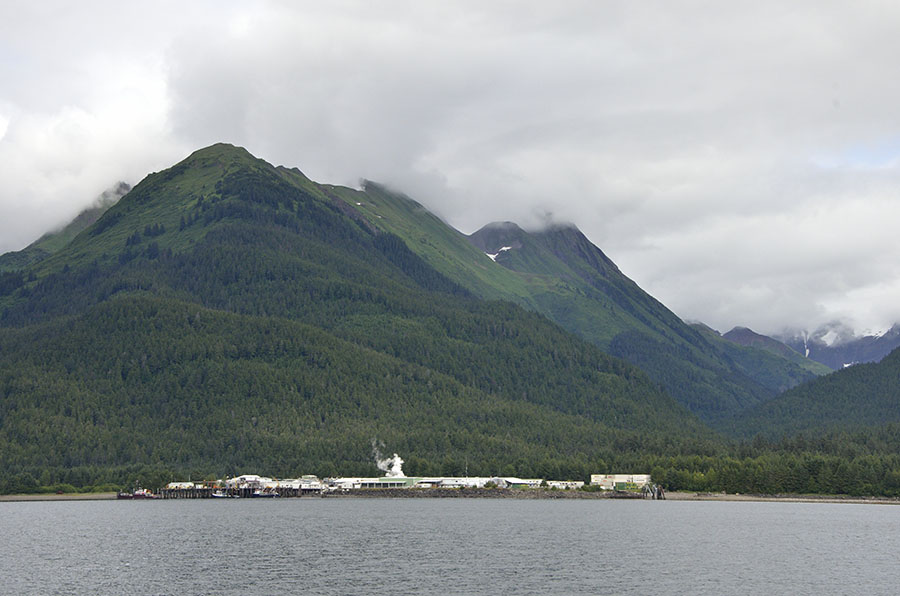 Often fishing boats will offload their catch to bigger tenders so the fishermen can stay on their fishing grounds while the tenders make the longer runs back to the canneries or fish processing plants.  The tender comes to the dock and the cannery lowers a giant vacuum hose into the fish hold and slurps the salmon out. 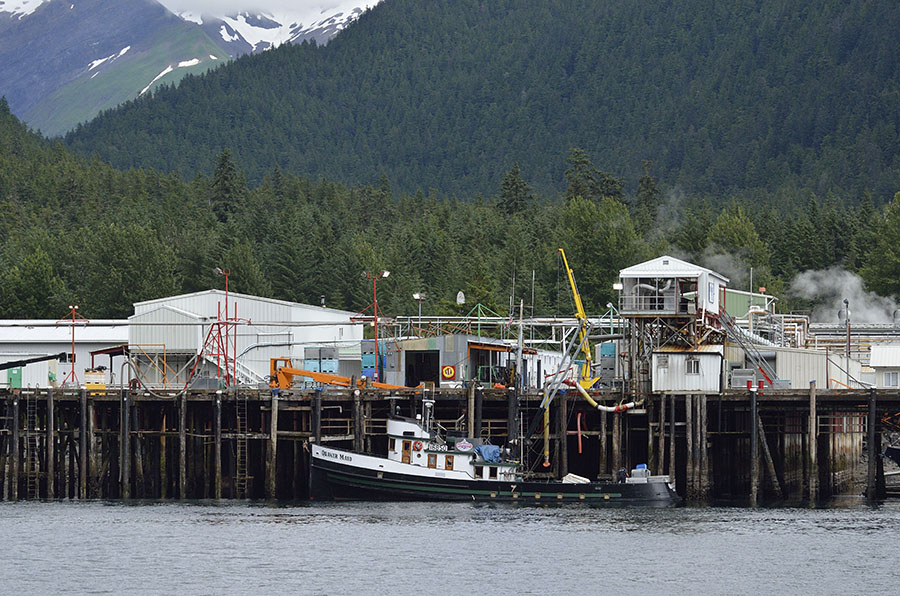 Unfortunately it’s impossible to get a tour of one of these canneries, but this particular one has been in operation since 1908 and it has a little museum that’s open to the public.  Visitors to this remote spot are few and far between – the public dock is pretty rickety and we wouldn’t tie ADVENTURES to it.  Instead we anchored farther up the fjord in a little side cove that was very quiet and pretty, with eagles, a black bear, and a brown bear for company.  We put the dinghy in the water and zipped down to the public dock to check out the museum and just to stretch our legs after too many rainy days on the boat. 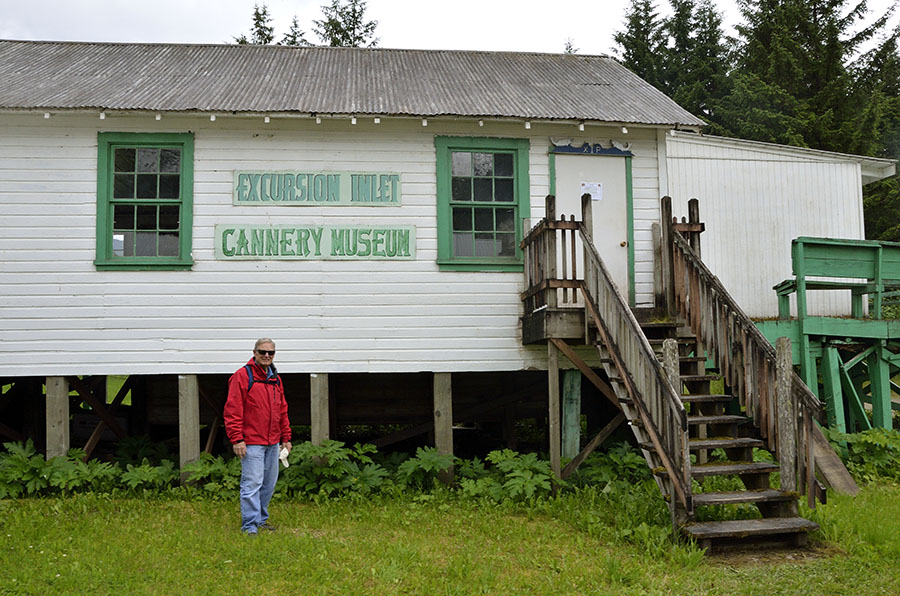 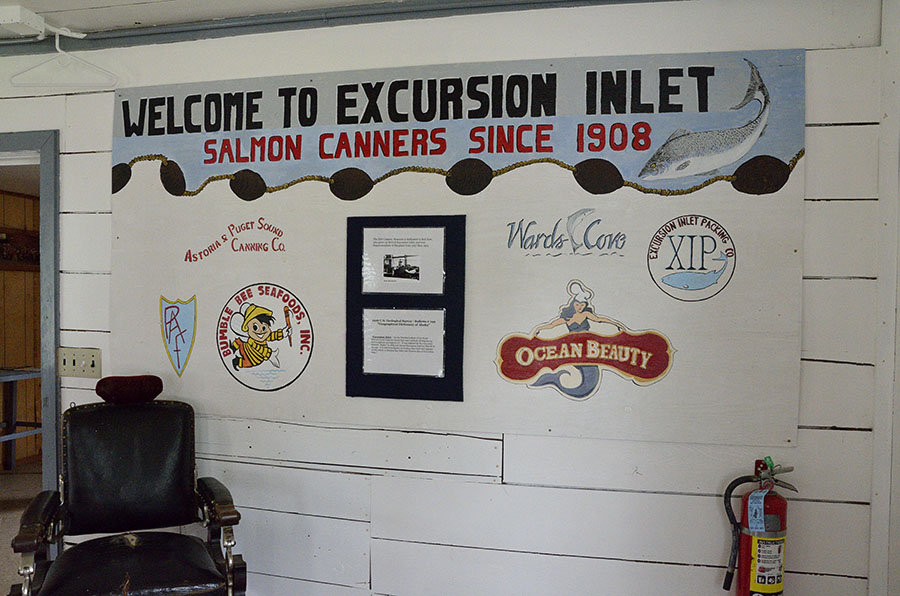 The museum was small but it was very nice with a slide show playing on a computer in one corner, next to a tall ship built from crab claws. 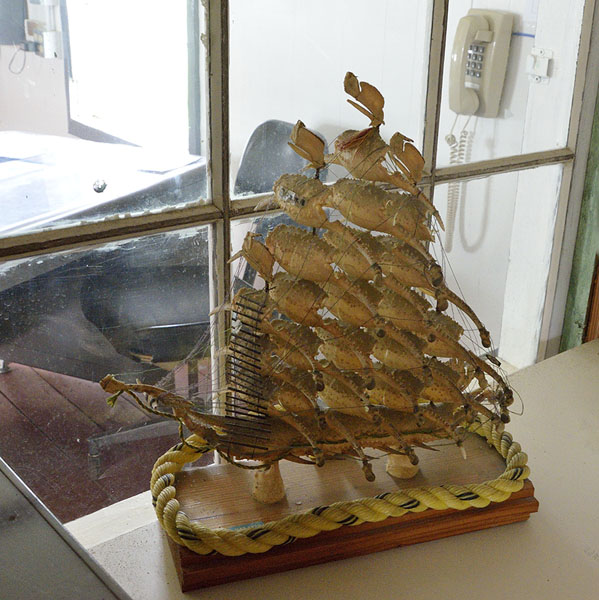 There were display cases with lots of history about the cannery and the area, as well as samples of the many different labels that were put on Excursion Inlet’s cans over the years. 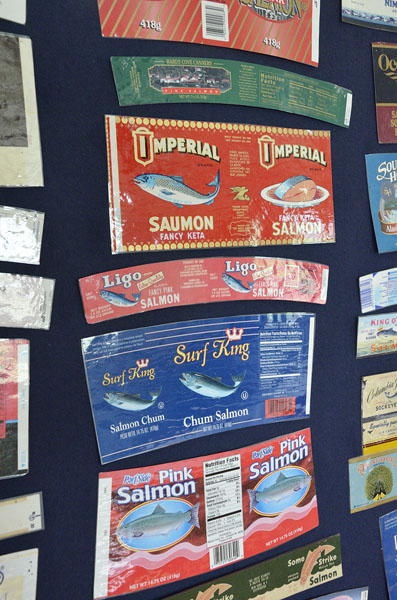 During World War II the US Army built some infrastructure here in case the Japanese invaded more of the Aleutian Islands, and when it was no longer needed they used some German prisoners of war to dismantle the extra buildings.  What remains now are some recreational buildings, a handful of homes, bunkhouses, the cannery buildings, and a company store with a small “hotel”.  The lady in the store knew friends from Petersburg (the fishing community is a pretty small world up here), and she helpfully pointed out the ice cream freezer in the back of the store.  We walked around a little with our treats, in need of some exercise when we came upon some blue flashing lights near the ground and warning signs… 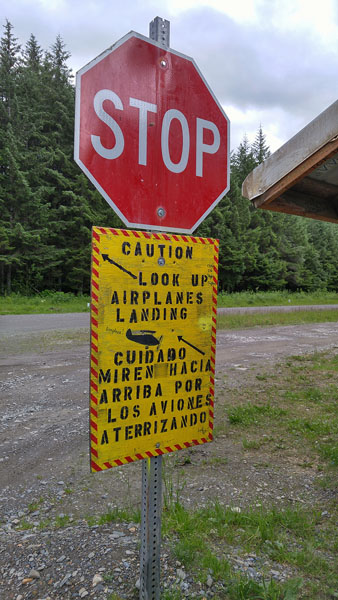 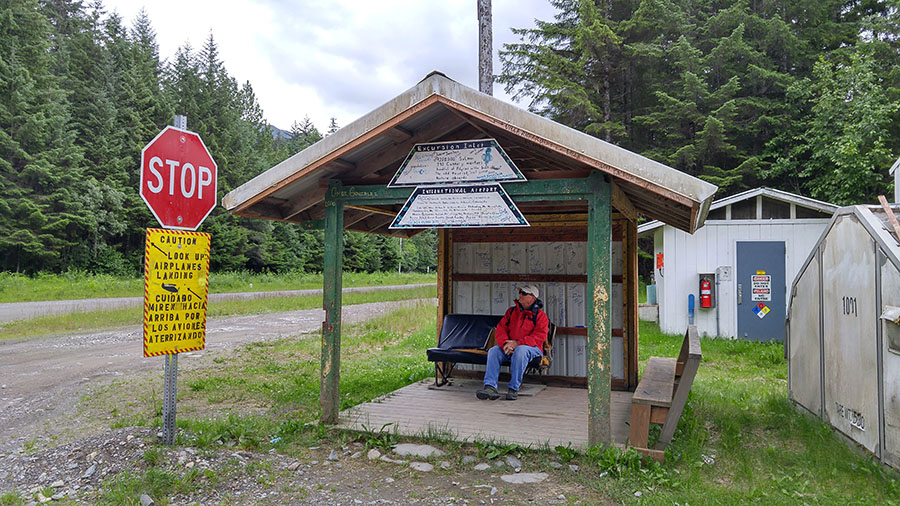 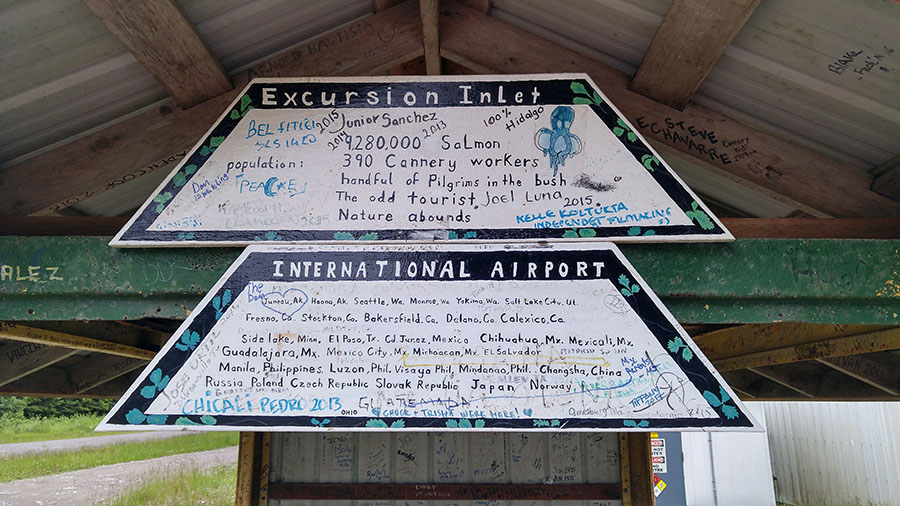 The sign reads 9,280,000 salmon, 390 cannery workers, a handful of Pilgrims in the bush, The odd tourist (that’s us), and Nature abounds.  The lower sign lists the many places around the world where the cannery workers come from.  It’s a pretty hopping place in the summer, but then it closes down for the rest of the year with just a caretaker couple to watch over the facilities. 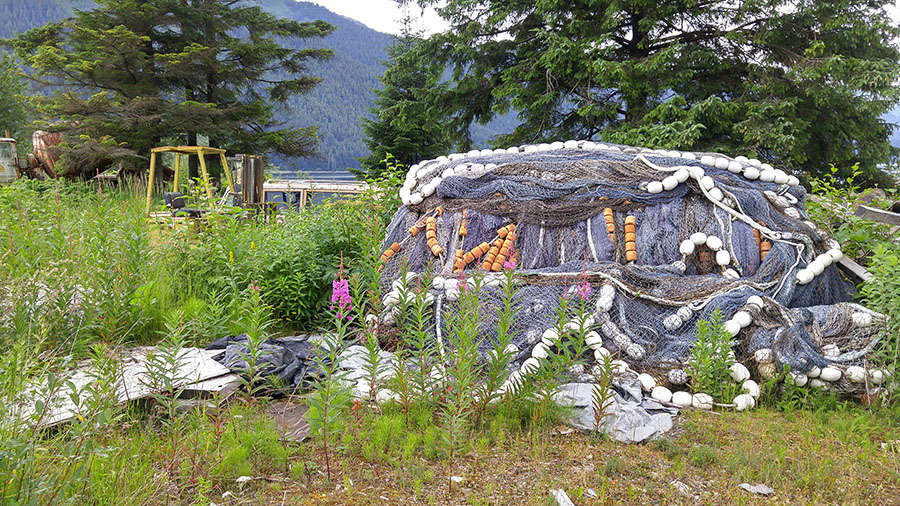 We were glad to finally visit the little museum – it has been on our list of places to stop for a couple of years.  After two nights we headed a little farther east to Swanson Harbor, through the rocky approach and into a nice protected harbor.  Swanson connects to its neighbor harbor via a narrow, shallow channel that’s only passable by small boats at mid-tide or greater, and I like to explore it by kayak.  There are some isolated sandbars and rocks that are popular with birds like the oystercatchers… 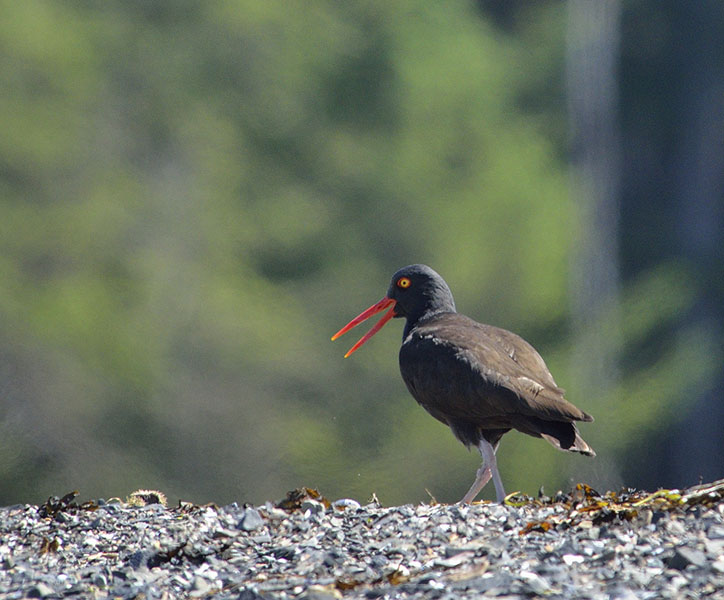 …and some godwits – marbled, I think. 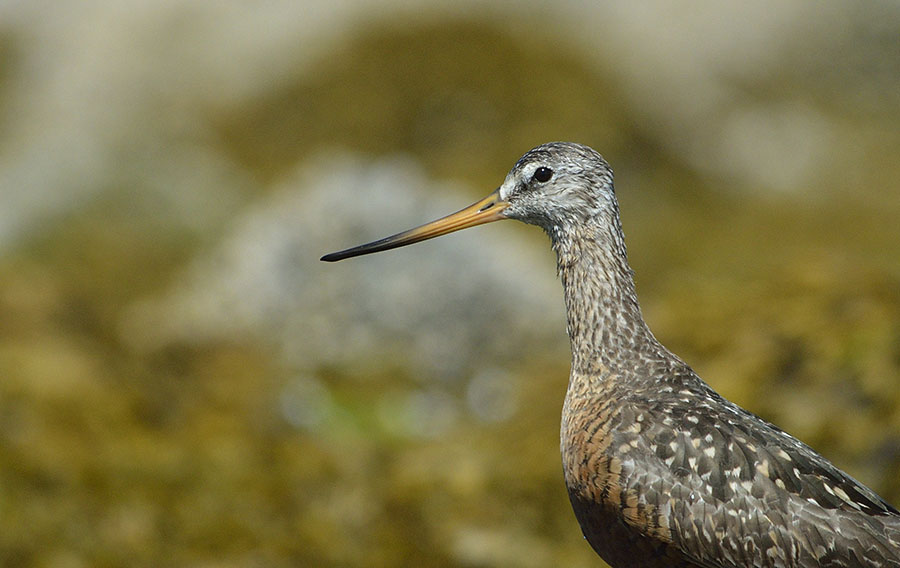 Gulls and spotted sandpipers rounded out the birds on the bars, and I spotted some dungeness crabs in the shallows.  Speaking of crabs, Swanson is popular with smaller private fishing boats who like to tie up to the two municipal floats.  We were having drinks with friends on another boat when a neighbor pulled a few king crabs out of his cooler to steam. 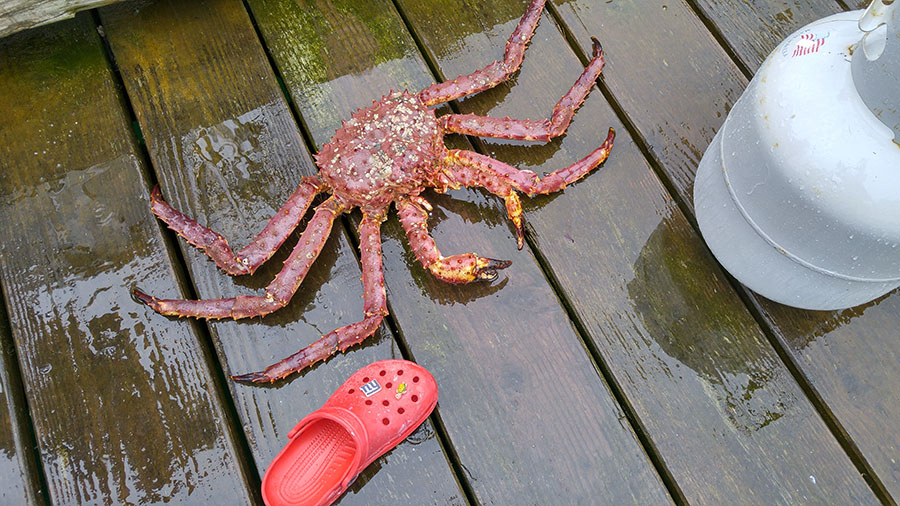 He shared some of the king crab legs with our little party, and pretty much every boat in the harbor was having some kind of seafood festival as they worked to clean the day’s catch of halibut and salmon.

One of my favorite things about Swanson is that it has nice views of the Coastal mountains, and sunsets are pretty when the sky is clear.  We have so many tall mountains around us that we don’t get to see nice sunset light too often. 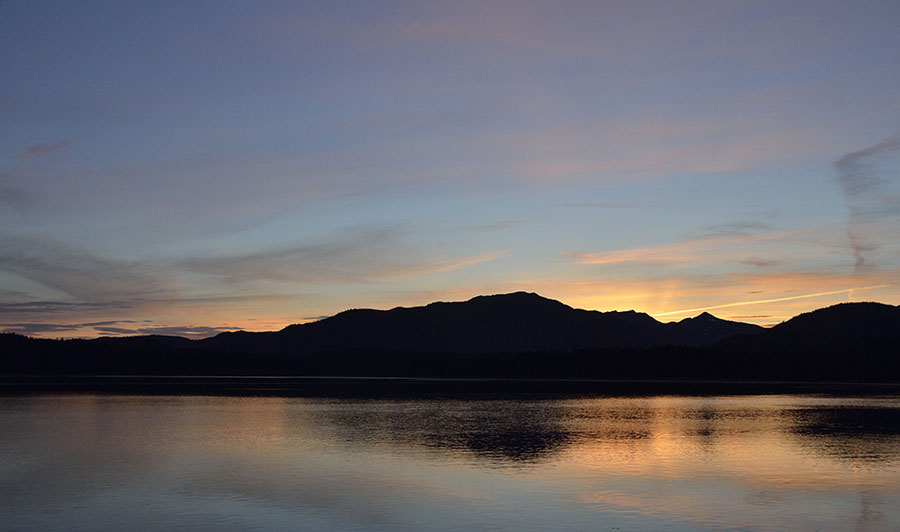