Up towards the north end of Death Valley National Park is the massive 600′ deep Ubehebe Crater created by steam and gas exploding beneath the surface about 300 years ago. 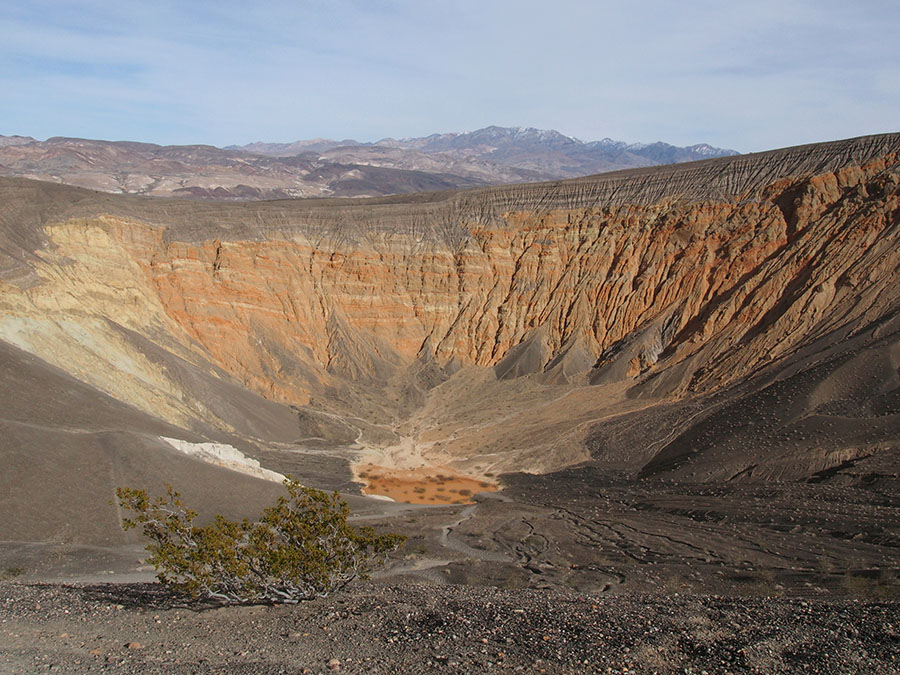 The colors on the far side, 1/2 mile away, are deposits from an ancient alluvial fan that were exposed by the explosion.  Cinders create a moonscape all around the crater – stark but beautiful. 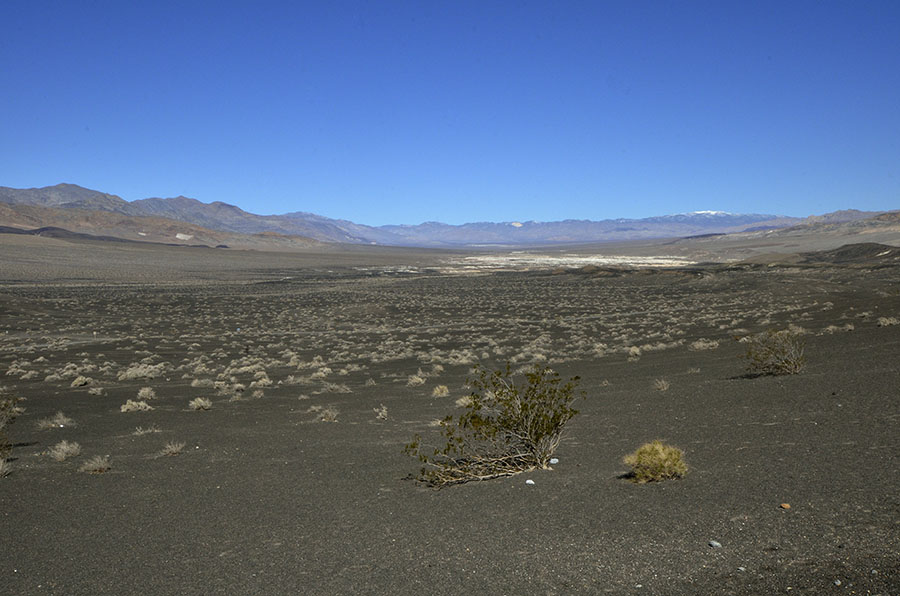 Starting from the crater we headed out the 27 mile long road to the Racetrack to see the famous moving rocks.  But the Racetrack road is not for the faint of heart – it’s a very rough, rocky dirt road in a remote part of the park.  Jeeps could bounce along a little faster than we could, but any vehicle risks a breakdown or a tire shredded by sharp rocks.  While our truck is perfect for towing the camper, its long wheelbase and stiff springs made the ride pretty brutal, keeping us at 10 miles per hour for much of the trip.  I was happy to walk around for a few minutes when we paused at Teakettle Junction, appropriately decorated. 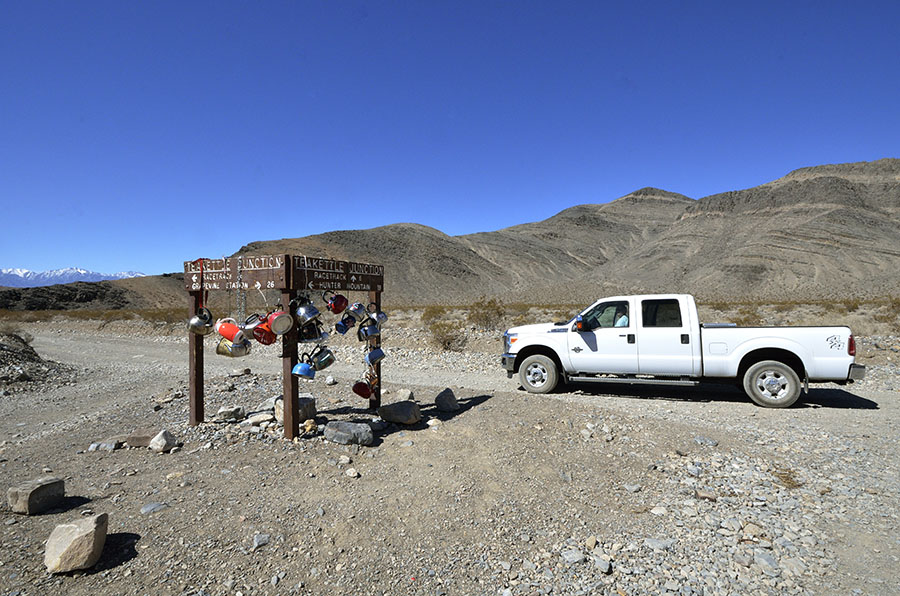 The Racetrack is a playa – a dry lake bed, light tan in color among darker surrounding rocks.  There’s an “island” of dark rock at the north end called the Grandstand where we could climb for a better view of the former lake.  A roadrunner was walking on the playa recently, leaving footprints in the mud softened by recent rain.  Rain (and possibly ice) is the secret to the magic of the Racetrack, where rocks that tumble from the mountains move across the playa, aided by strong winds. 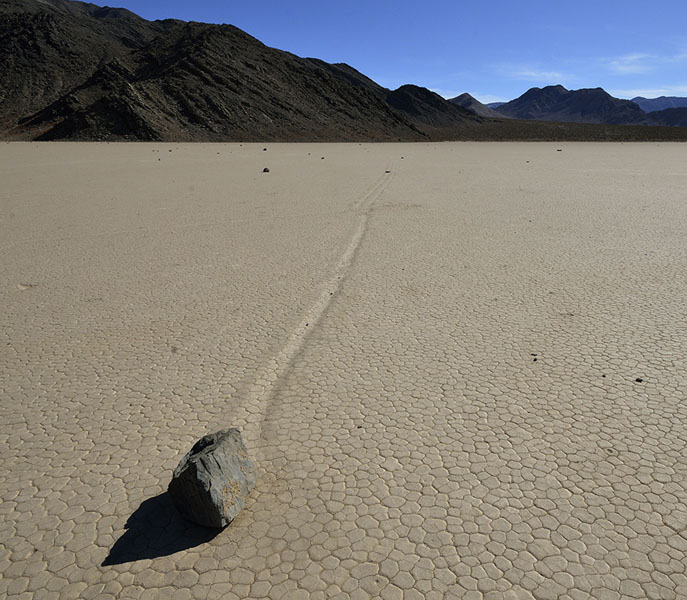 With only 2″ of rainfall annually, the rocks don’t have a lot of opportunities to move, but when they do they leave trails that snake across the playa, crossing other trails, and sometimes taking strange turns. 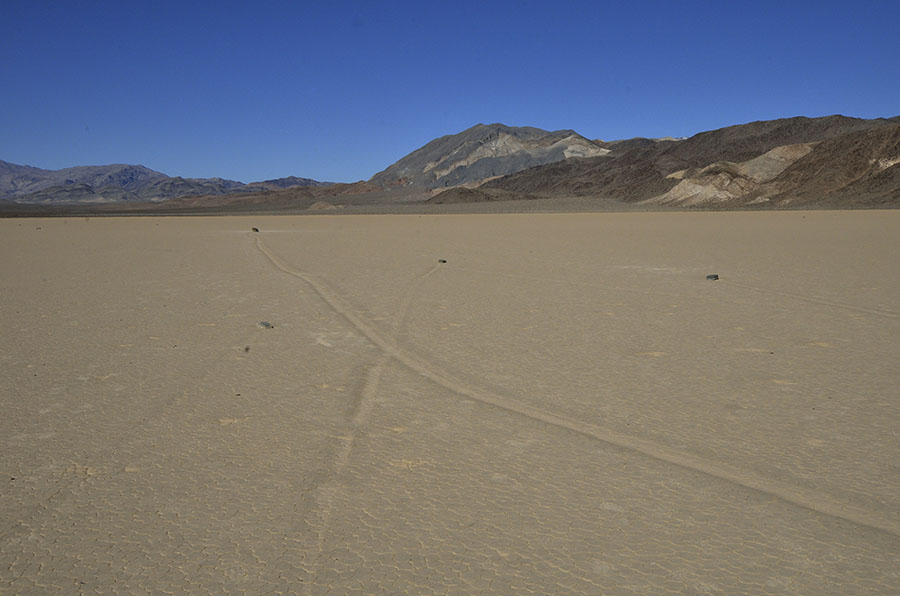 We spent a couple of hours exploring and photographing the playa and the moving rocks – it was well worth the bone-shaking ride out there. 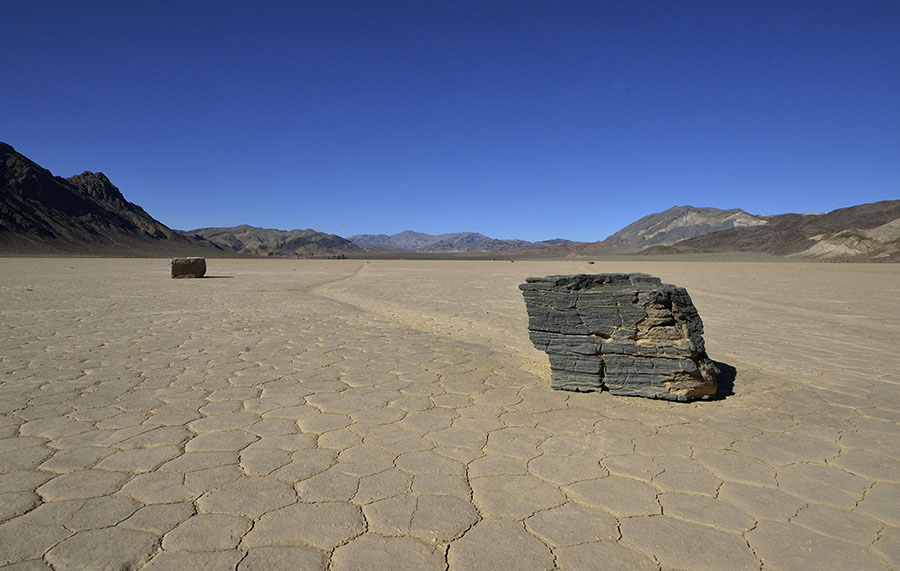 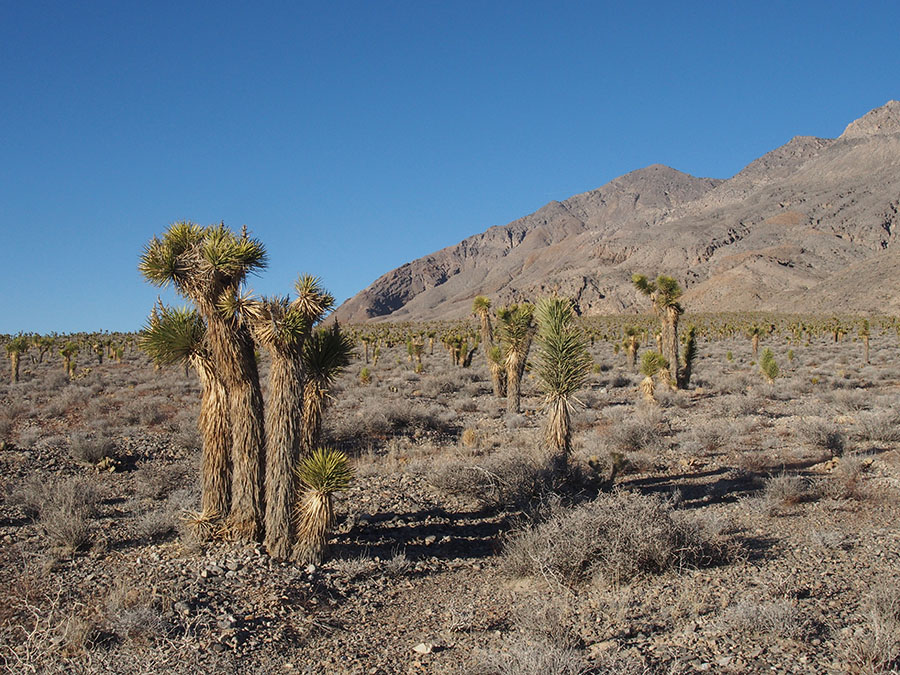 …and the barrel cactus lower down, with pink tops hinting at new spring growth. 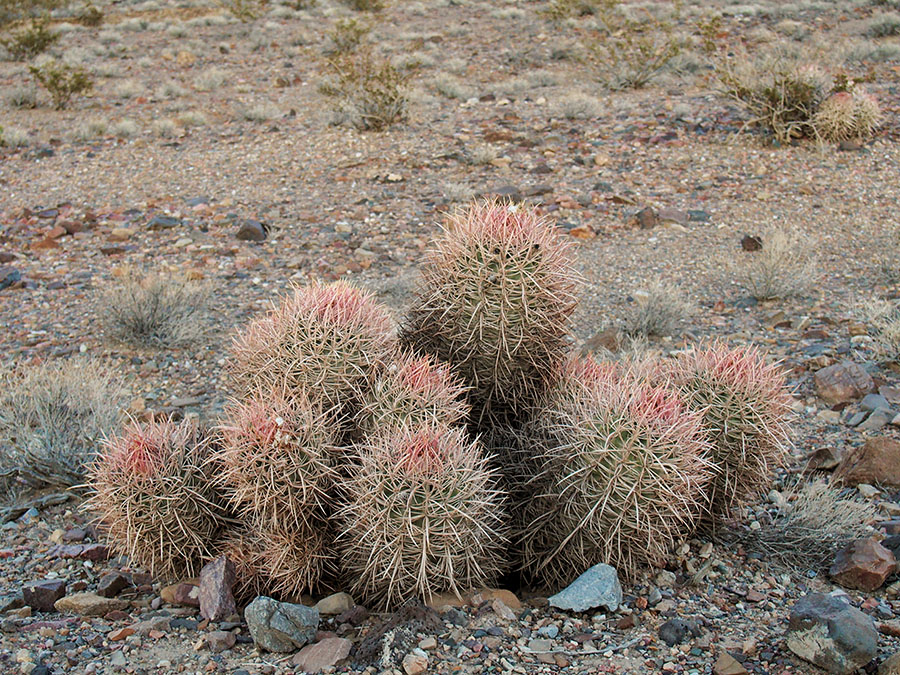 To cap another amazing day, I enjoyed seeing so many stars in the clear, dark sky.  Orion’s Belt and the Seven Sisters were a welcome sight on a warm night. 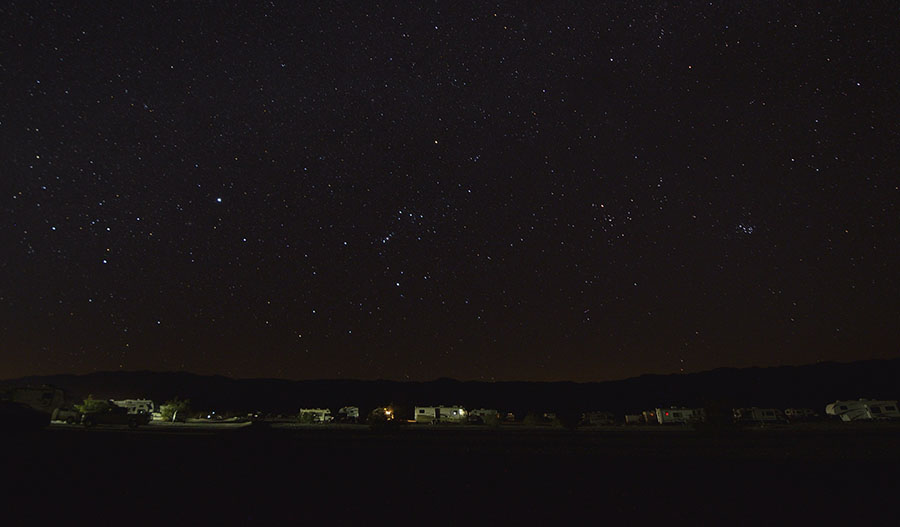 The following morning we hiked into Desolation Canyon to get away from the more popular trails on a weekend.  It lived up to its billing as a quiet place, but we were not prepared for the range of soft pastel colors. 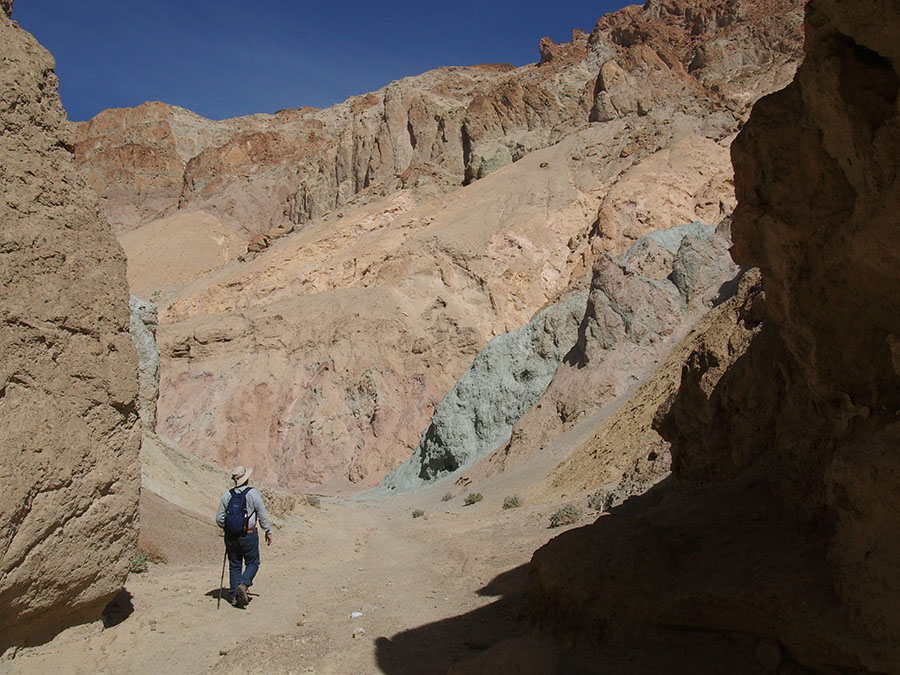 The hike was a lot of fun, but it included two big rockfalls that we had to climb.  Thankfully Jim is a better climber than me so with his help I felt less scared about making it, though the climb down was tougher than going up.  It looks easier than it was! 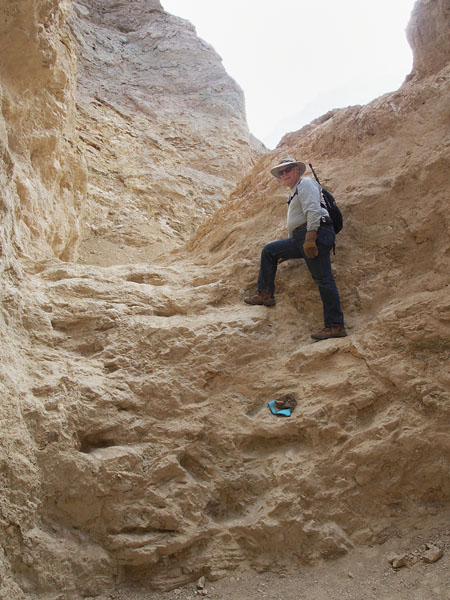 Our favorite!, we declared.  So dramatic and colorful! 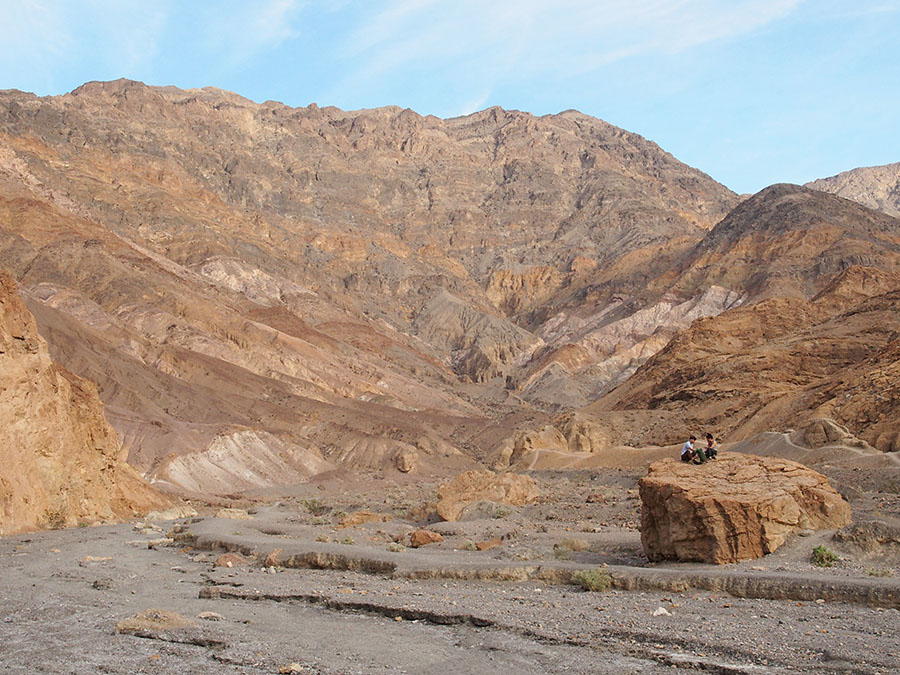 Then we spent the afternoon hiking Mosaic Canyon for something quite different.  Another favorite!  Mosaic was full of dolomite, softly shining, striped, captured in aggregates and trapped in layers in the canyon walls. 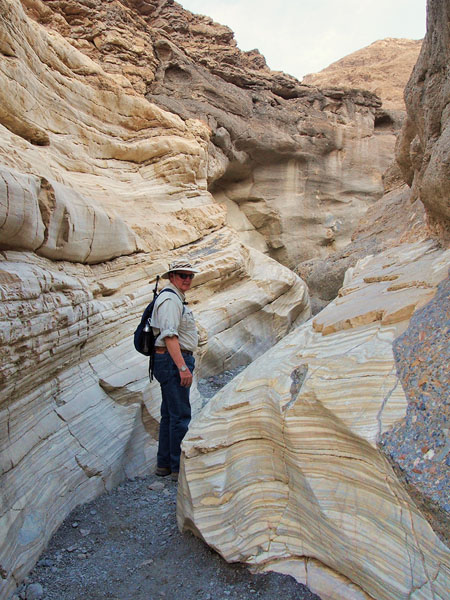 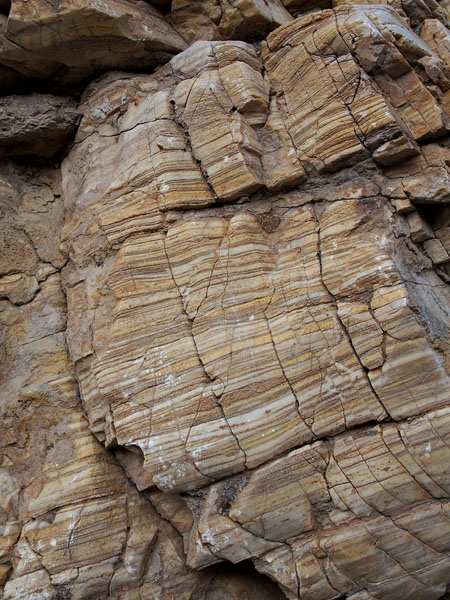 I could bore you with endless photographs – but nothing beats seeing it for yourself.  It was quiet and serene, cool and intimate as the sun dropped lower.  Each place we explored was so different from the last – I think that’s one of the things that struck us most about Death Valley.

We wrapped up our exploration with a visit to Salt Creek on the valley floor to see the rare and unusual pupfish that live in this harsh, salty environment – water that can be 4 times saltier than the ocean, and can range in temperature from freezing to over 100 degrees.  The white in the photo is salt, not snow – it was 80 degrees. 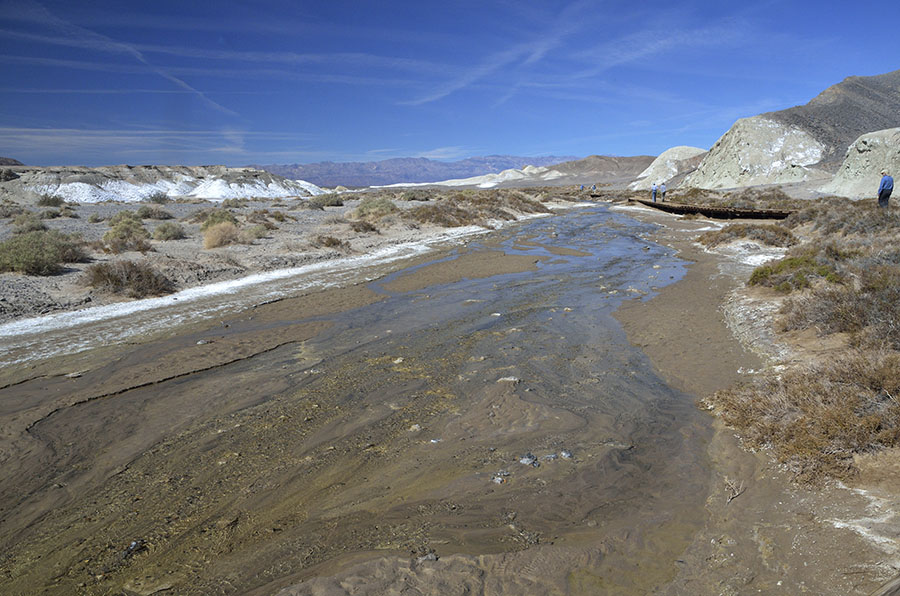 In addition to sodium chloride salt, borax is also found in quantity on the surface of the valley floor as well as buried underground.  Borax collection and mining were the most profitable pursuits in the area, and the “20 Mule Team” borax brand was representative of the effort it took to transport the borax out of the valley. 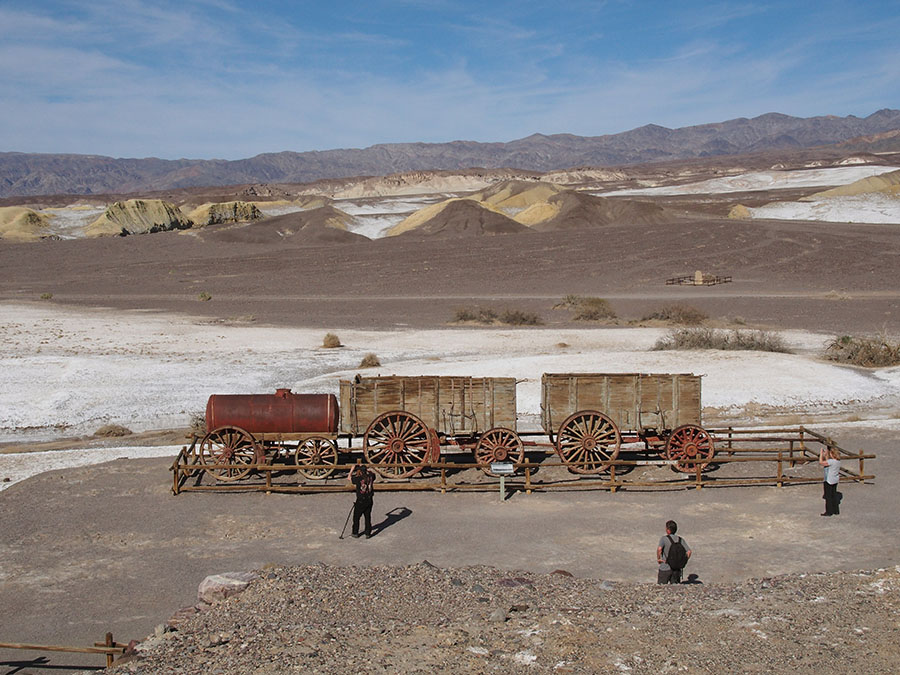 It’s mind-boggling to think about how much human activity – how much life – has occurred in such an unwelcoming place like Death Valley.  A surprising variety of wildlife and plant life thrive in the harsh driest and lowest place in the U.S., but it’s adaptable and hardy – the secret to survival.  We definitely plan to return to explore the park further (in the cooler months!) 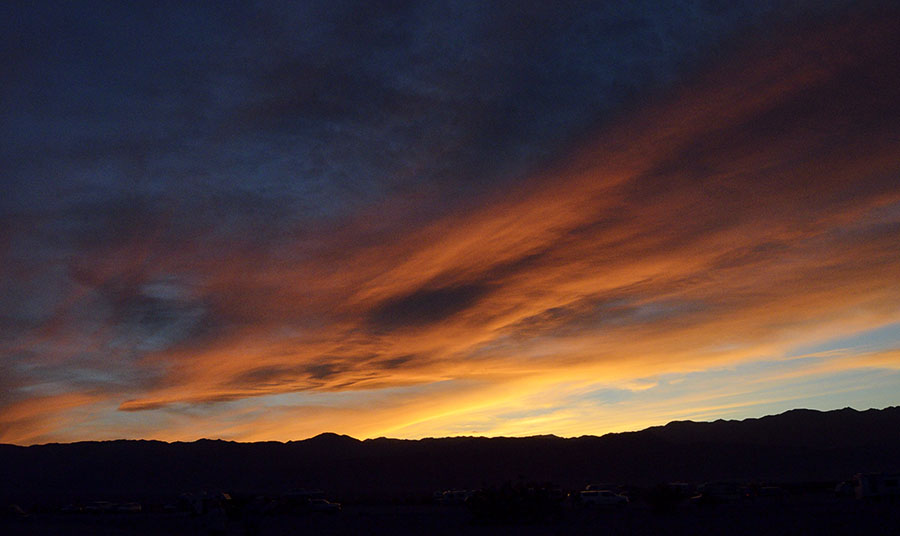