In the early 90s we were in graduate school at the University of Utah in Salt Lake City, and that gave us an opportunity to explore some of the wondrous parks in the southern part of the state.  Arches National Park was always our favorite, with glowing red rock in surreal formations.  There are over 2000 arches in the park, though we only saw about 15 of them since many are difficult to access.

The landscape was formed by deposits of sand and silt many millions of years ago when the state was part of a massive inland sea, drying and flooding multiple times.  Sandstone formed over salt domes, and the domes eventually bulged, causing the rock to crack in parallel lines.  Water and wind began the erosion process, shaping rock into fins and dissolving some of the “glue” between grains of Entrada sandstone to form arches… like the Window arches… 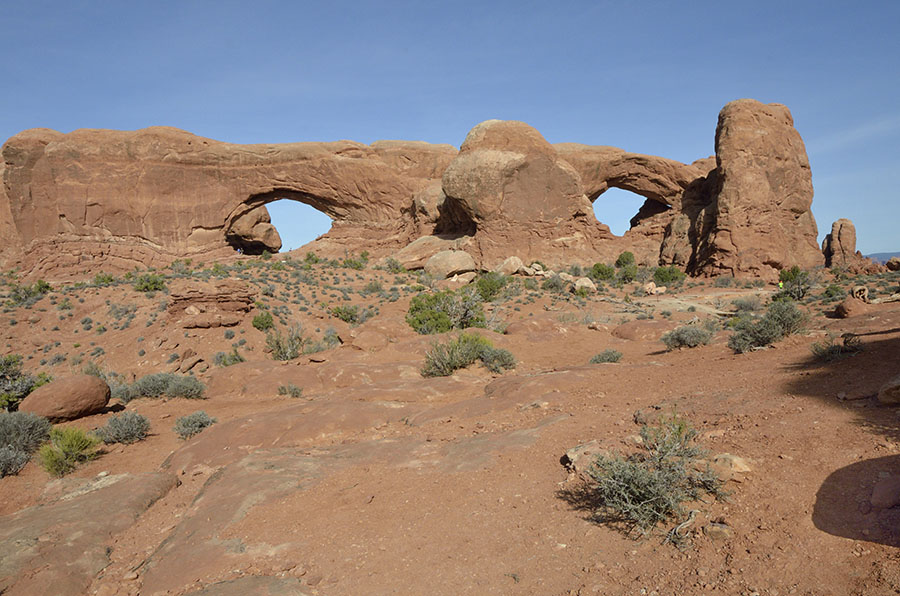 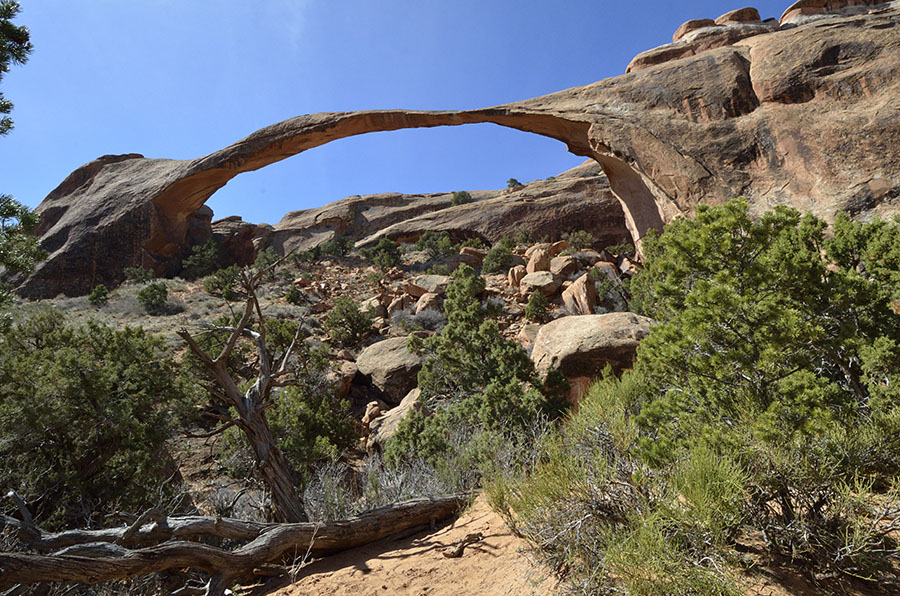 …and the iconic Delicate arch, just to name a few. 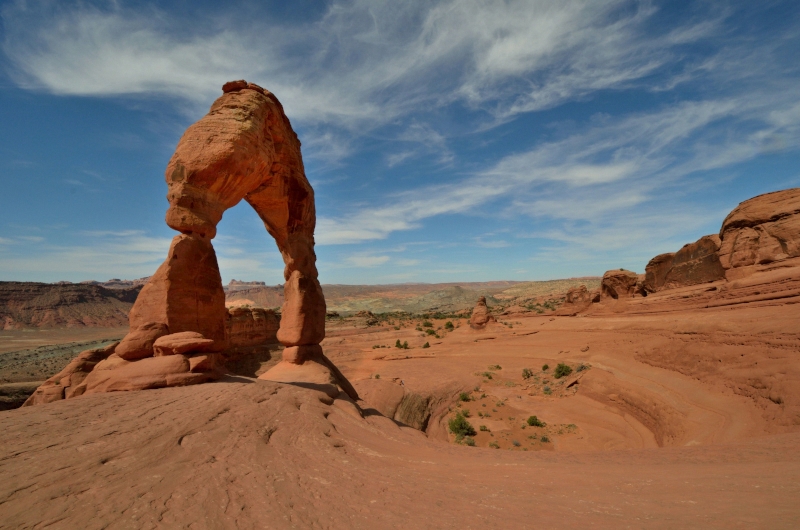 Geologic forces are also responsible for shaping Arches, starting with the Moab Fault which split the rock face and shifted the west side 2600′ higher than the east side. 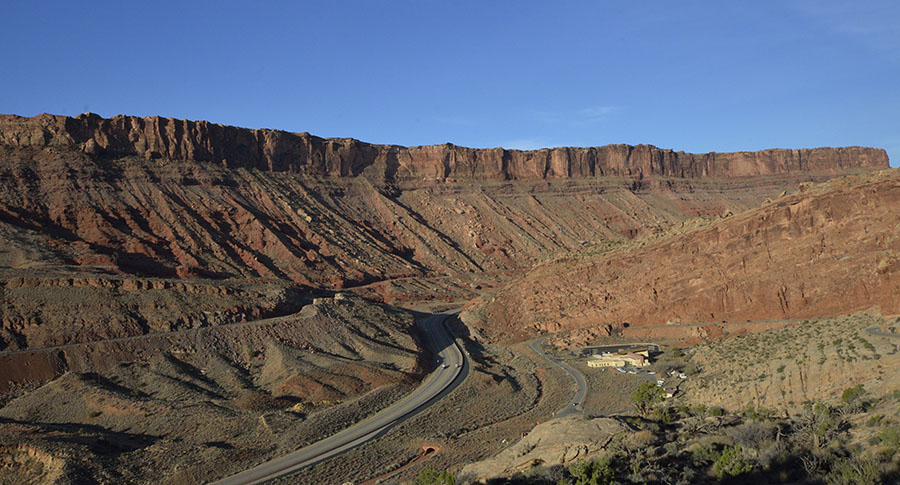 The road just outside the park follows the fault, which means that if the earth starts to shift again it could make for some dicey driving!  In addition to arches, flat panels of sandstone stand proudly in the landscape such as Park Avenue… 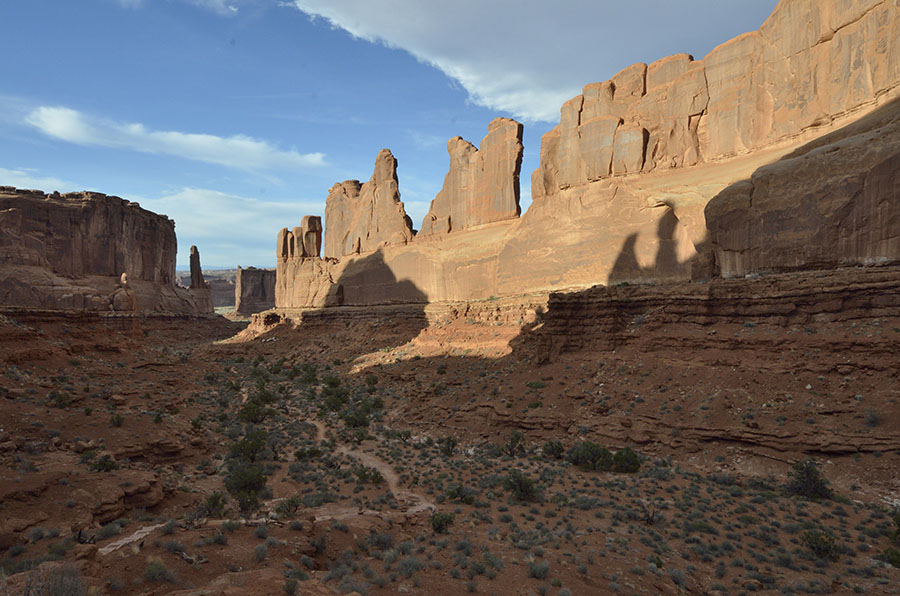 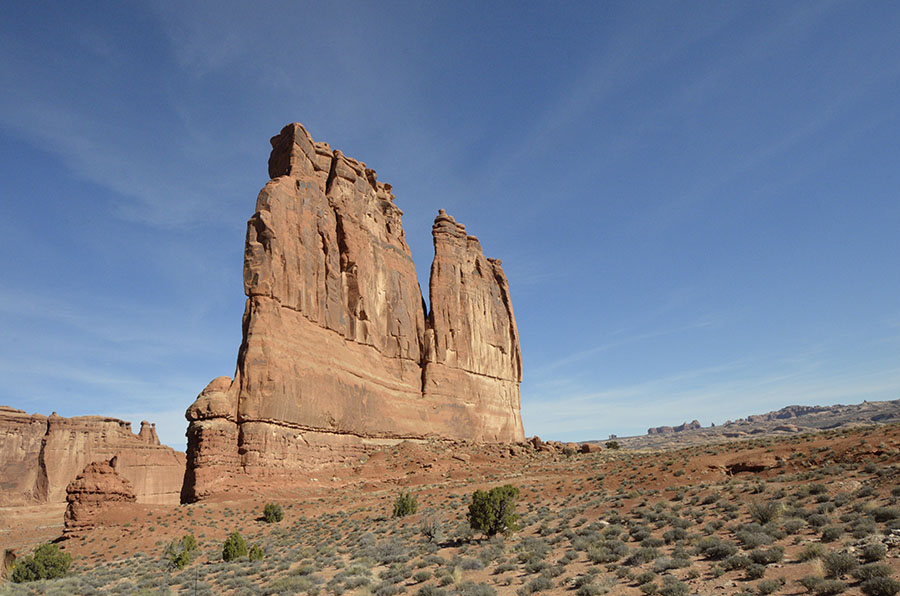 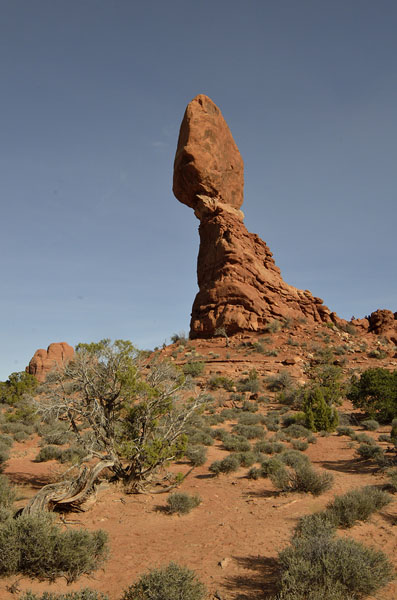 …and we keep wondering what the Three Gossips are whispering about. 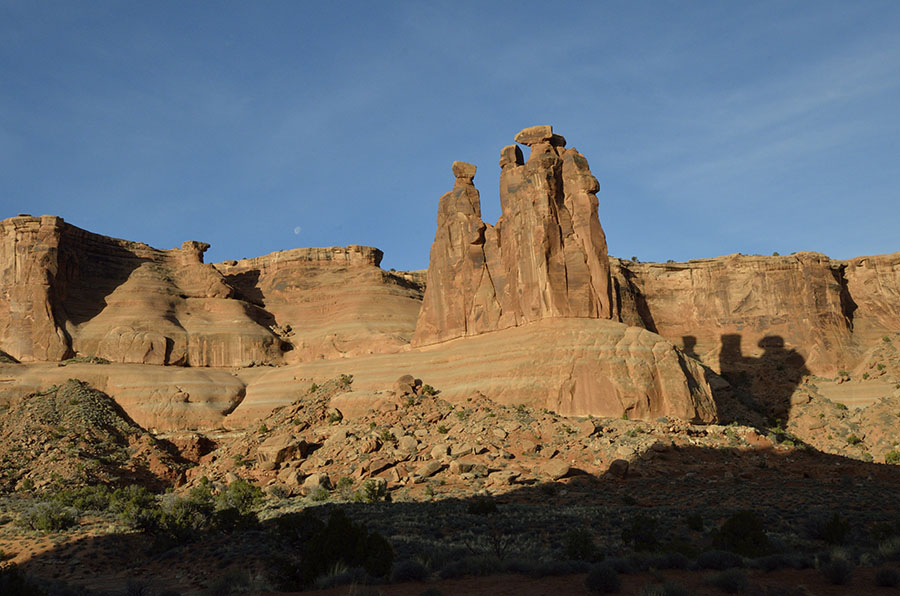 While some of the arches are easy to get to and lots of fun to climb around, such as the Double Arch… 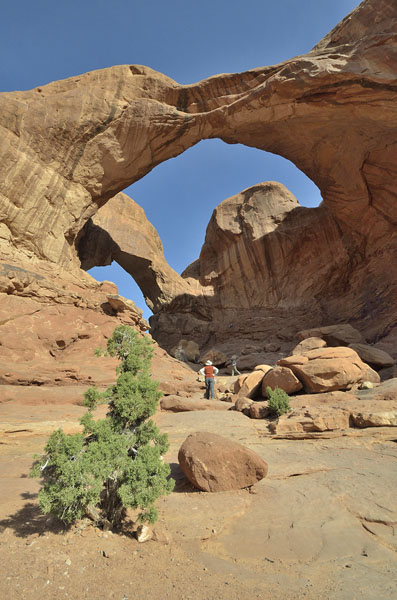 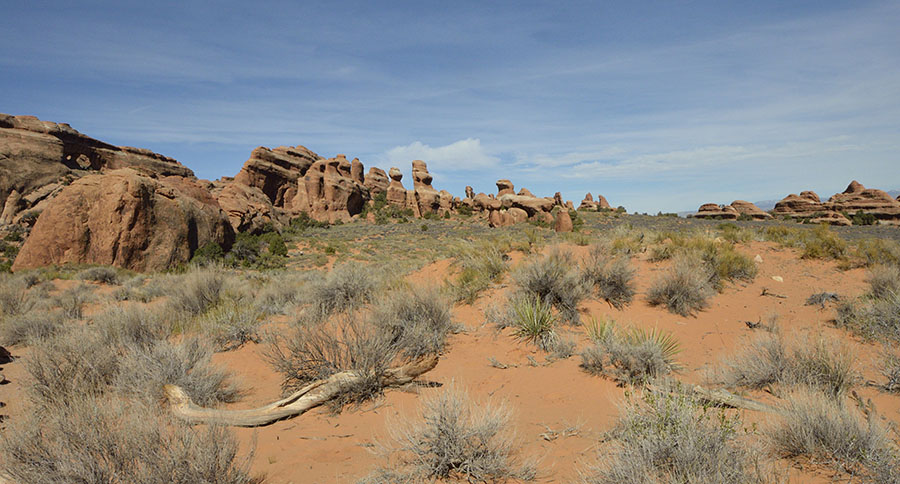 …to see the Sand Dune arch… 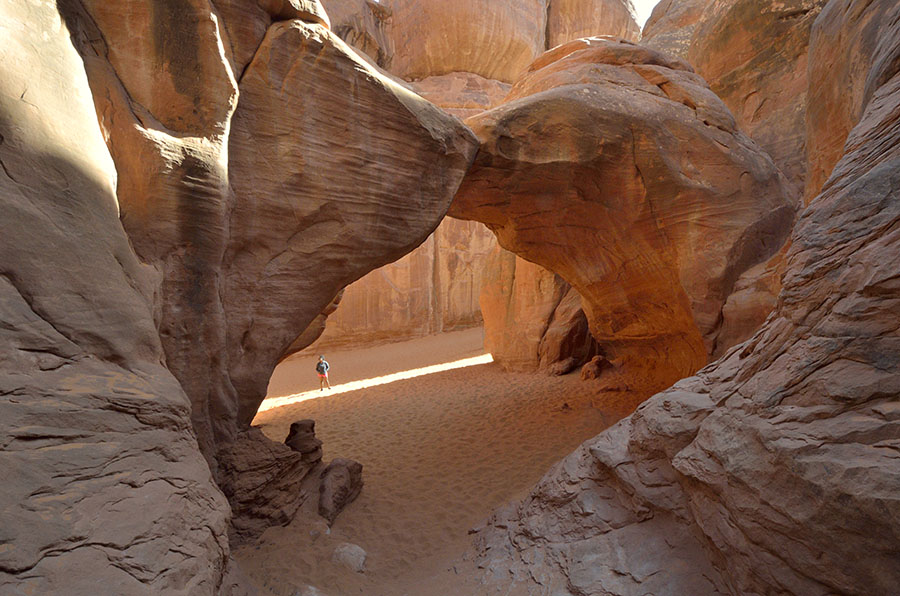 …and the Broken arch. 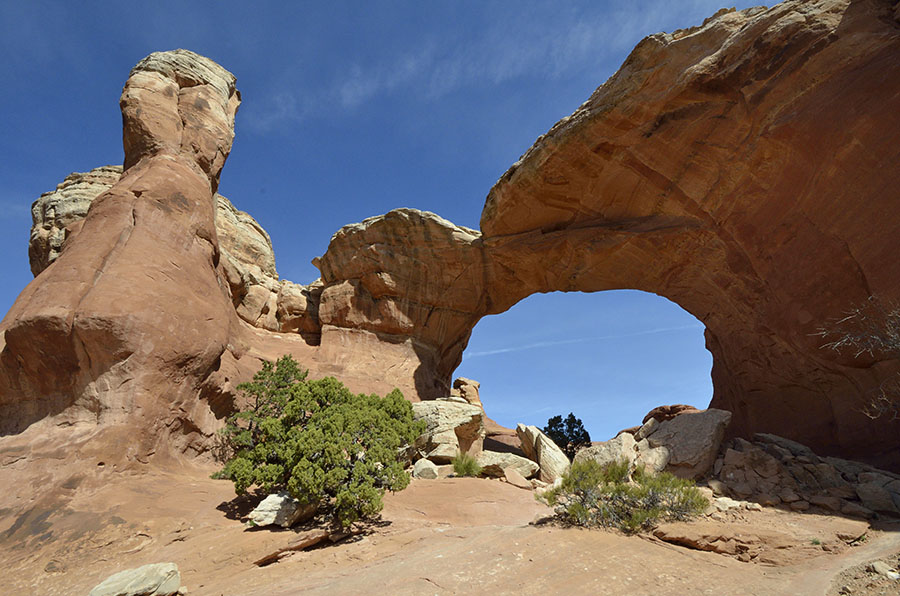 We also wanted to see some of the more remote arches, and first on our list was Tower arch.  This arch can be reached by a very rocky 4-wheel drive road and a short hike (we found the road to be too rough for us) or a 9 mile dirt road and a moderately difficult 2.5 mile hike, scrambling up to a rock ridge and a brutal slog on a few steep sand dunes – but it was worth it!  Can you spot Jim under the arch? 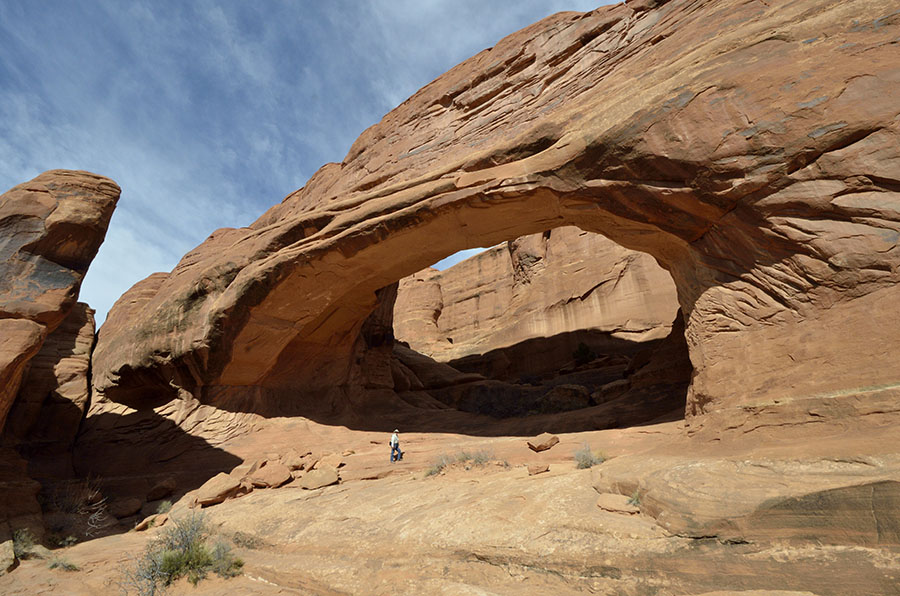 The view from the arch to the west was gorgeous, and we loved scrambling around underneath it. 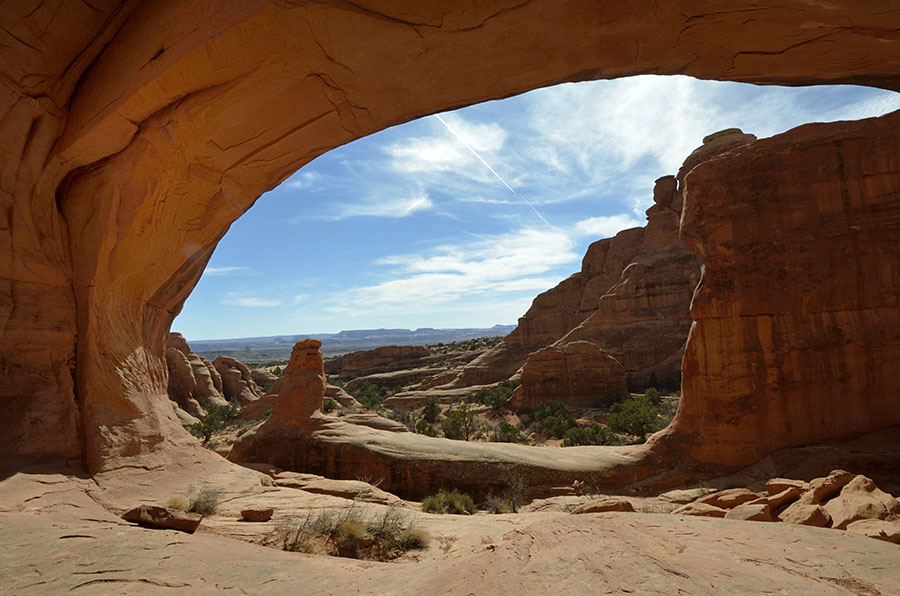 The next day we got a backcountry permit to venture into the Fiery Furnace area – a more challenging part of the park requiring a lot more rock scrambling, where trails don’t exist, and with a risk of getting disoriented.  We took it slowly and carefully, backtracking often to find our way among the tall fins to discover a small arch we could crawl through, and eventually we found Surprise arch after making our way carefully along a narrow ledge. 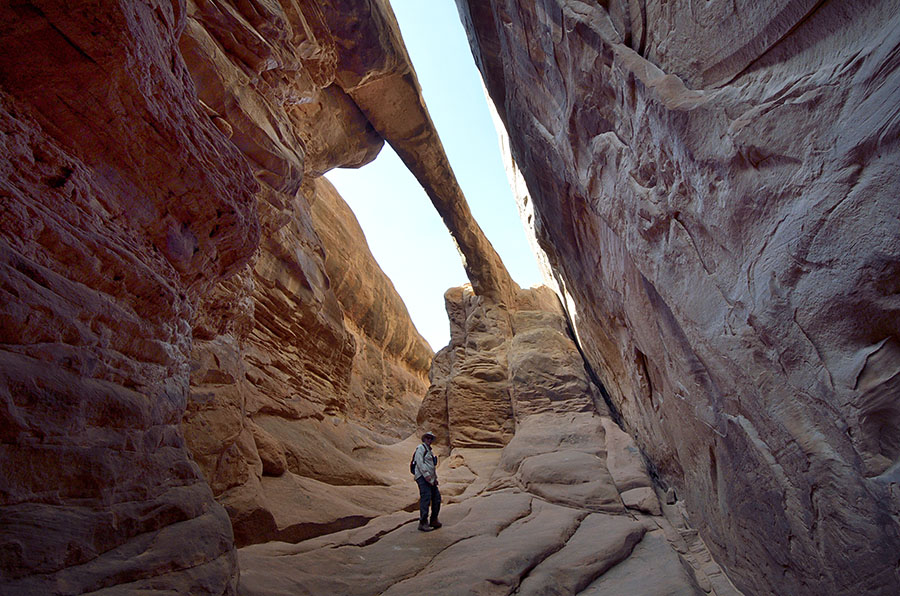 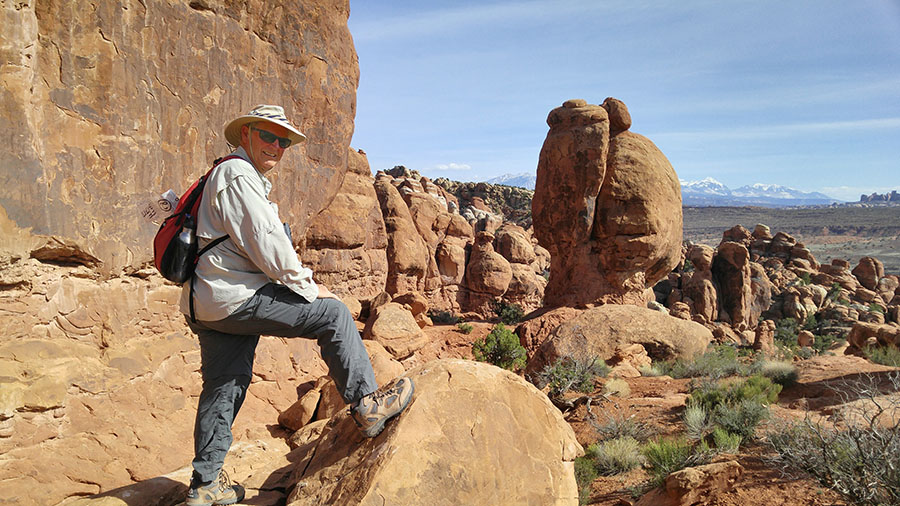 Arches never ceases to amaze and delight with its many shapes and hidden treats, and I think it’s still our favorite of Utah’s treasures. 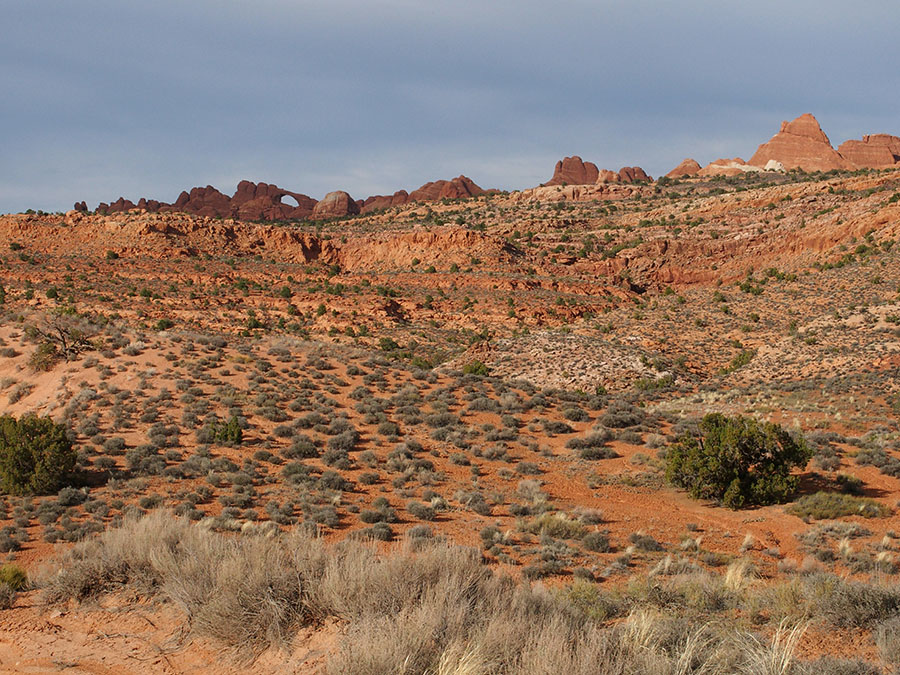