Daylight is increasing by five minutes per day now… it really makes a difference!  As much as we all look forward to spring, people around here actually like the winter – hoping for snow for cross-country skiing, snow shoeing, and taking snow machines up on the logging roads.  We have different birds in winter than in summer, including some trumpeter swans that are frustrating to photograph.  They eat weeds and things on the bottom of the creek and they can hold their breath for a long time, which is a good thing if you’re a hungry swan but a bad thing if you’re a photographer holding a heavy lens.  I was lucky to get one marginal shot of an adult swan with two cygnets (young swans, still in their light gray feathers), but most of the time they just looked like headless lumps in the water.

While I watched the swans a little squirrel chittered loudly at me, as though I was invading his personal space! 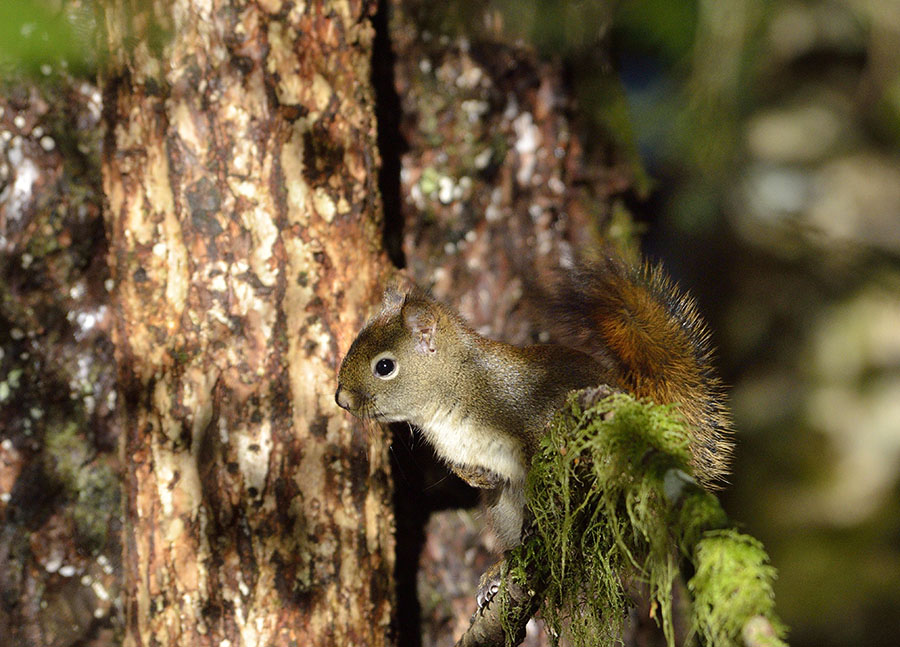 I was enjoying the first sunny day in a long while, amazed at how vivid the world looked after two weeks of very gloomy, rainy weather.  The arrival of sun also meant that the temperature dropped, but the crisp clear air made everything sparkly with frost and ice.  I went crazy looking at all the patterns at the edges of frozen water. 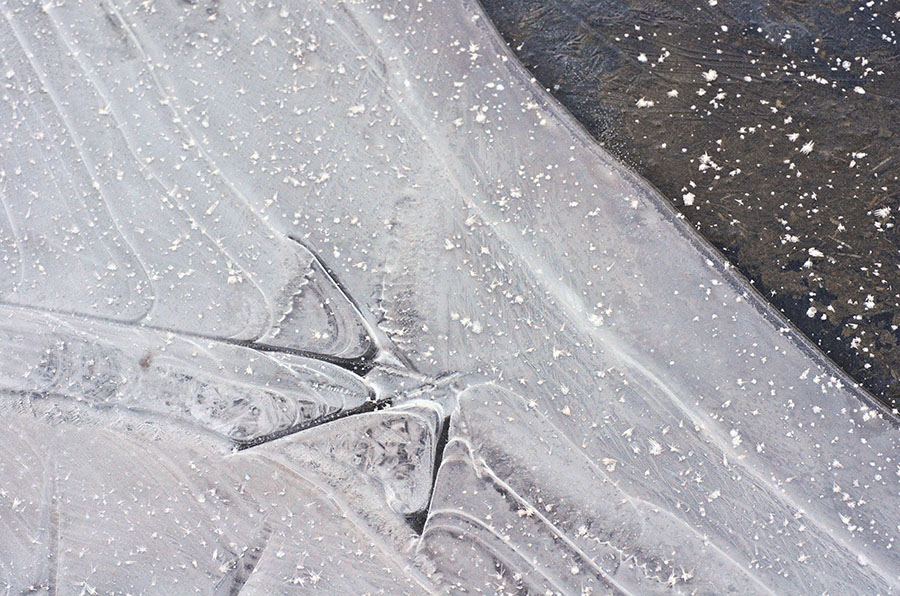 Of course the funny part of admiring the ice is that it looks black and white, even though the photos were shot in color. 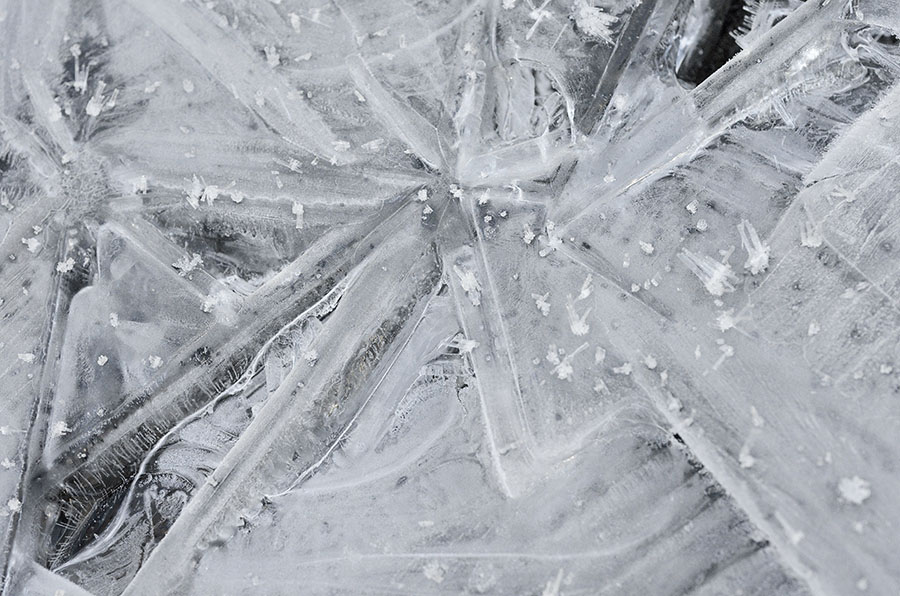 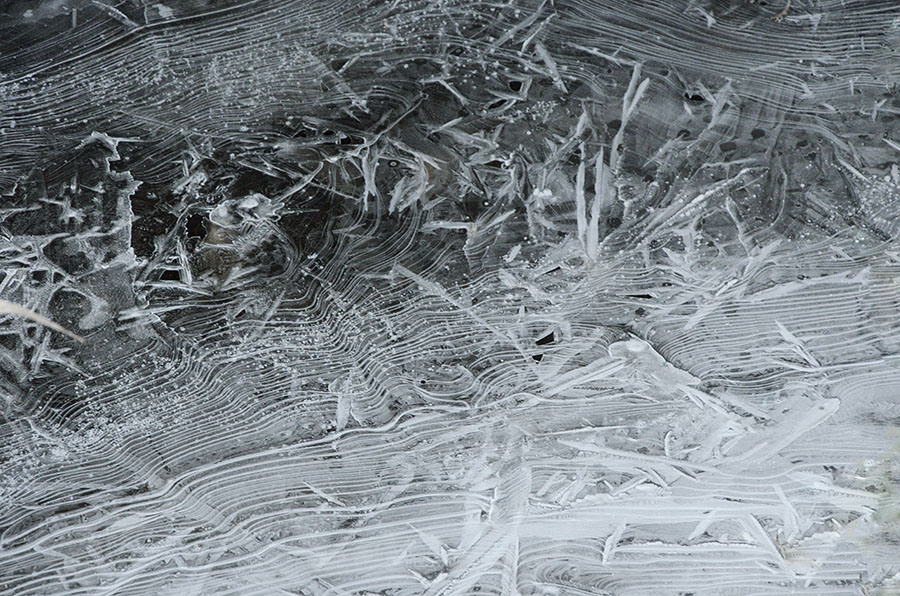 Frost touched everything that the sun couldn’t reach, making everything in the landscape sparkle. 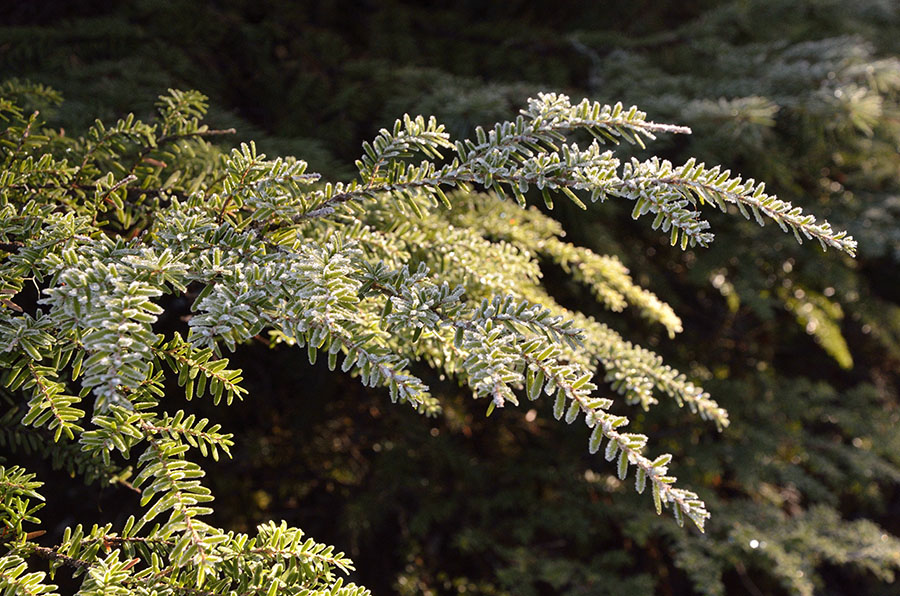 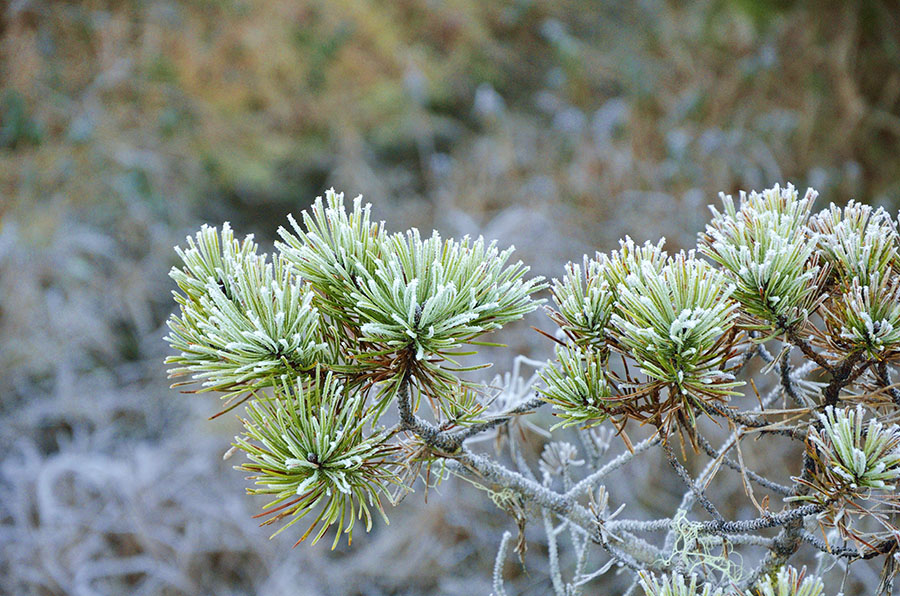 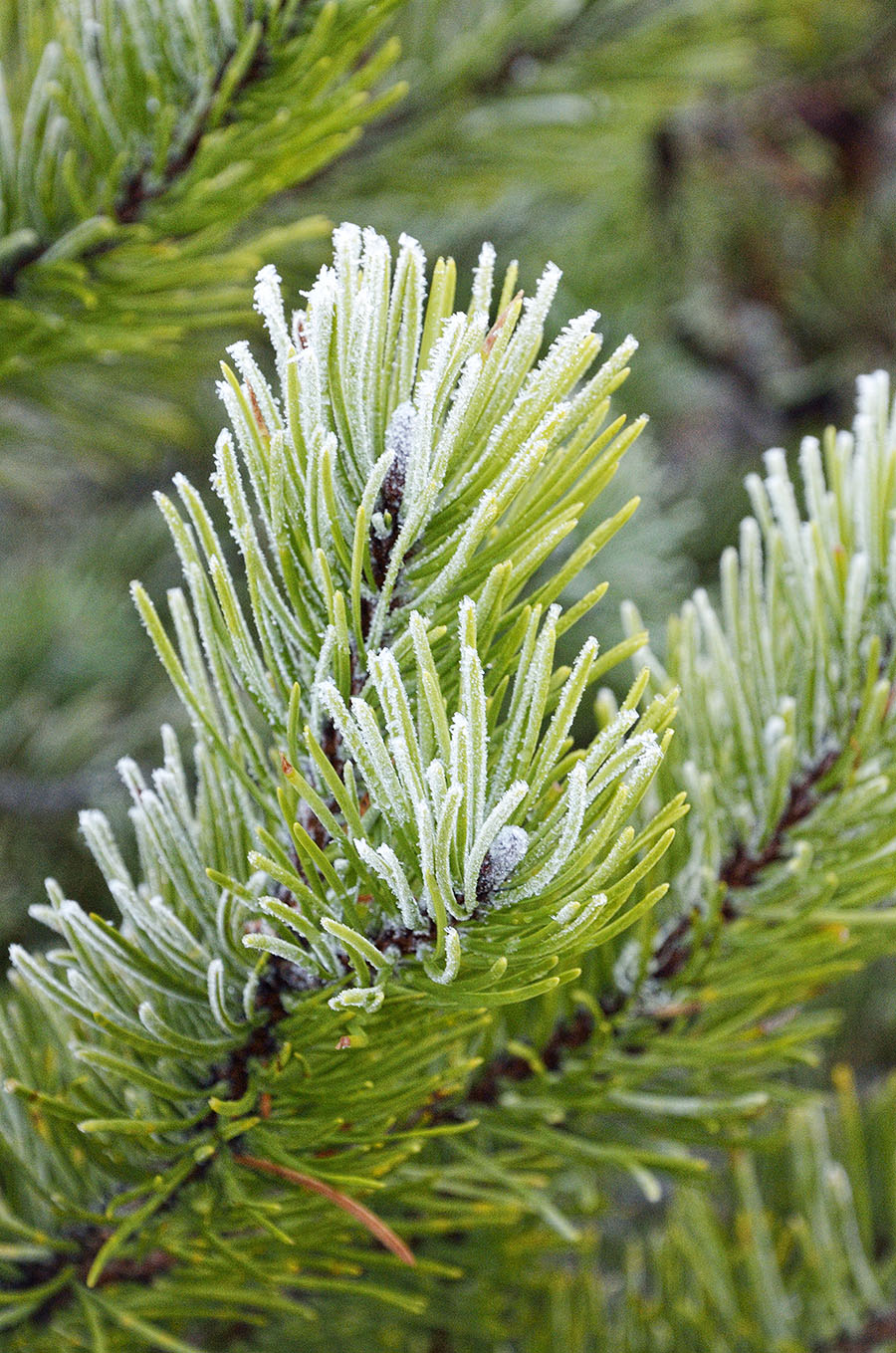 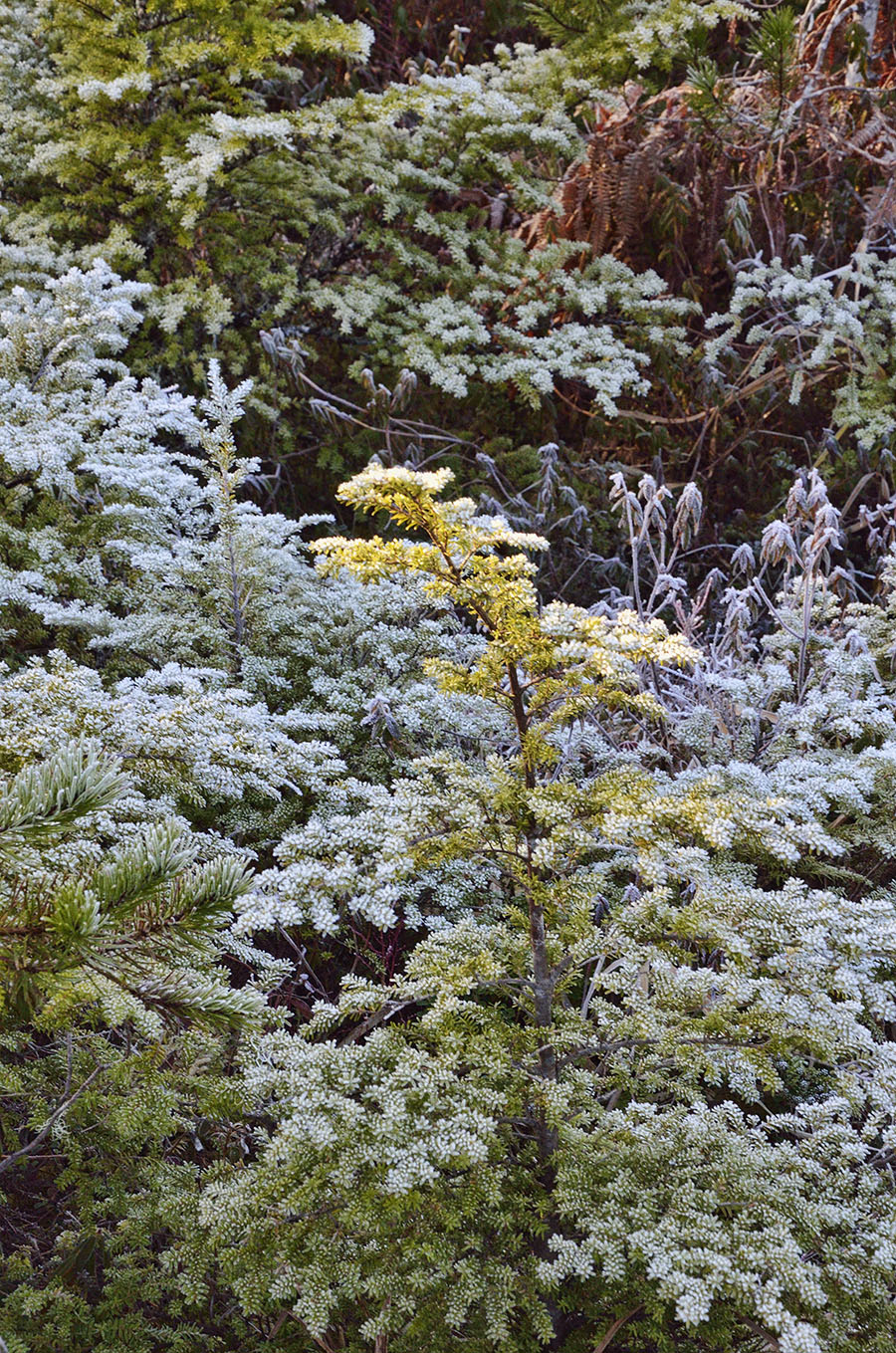 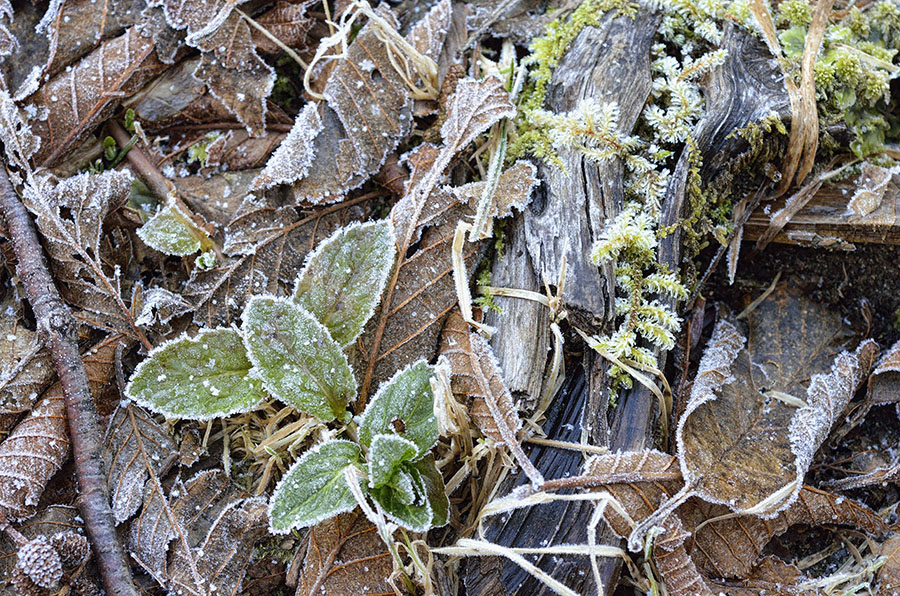 I had a marvelous day out the road, visiting with the swans, squirrels, ducks, mergansers, grebes, goldeneyes, buffleheads, and kingfishers.  Winter hiking is peaceful, and it’s a treat to be able to savor the quiet and the beauty.

On the way back to town I had to stop and admire the view from South Harbor.  With so many overcast days we don’t get to see the Devil’s Thumb peak as often as we would like. 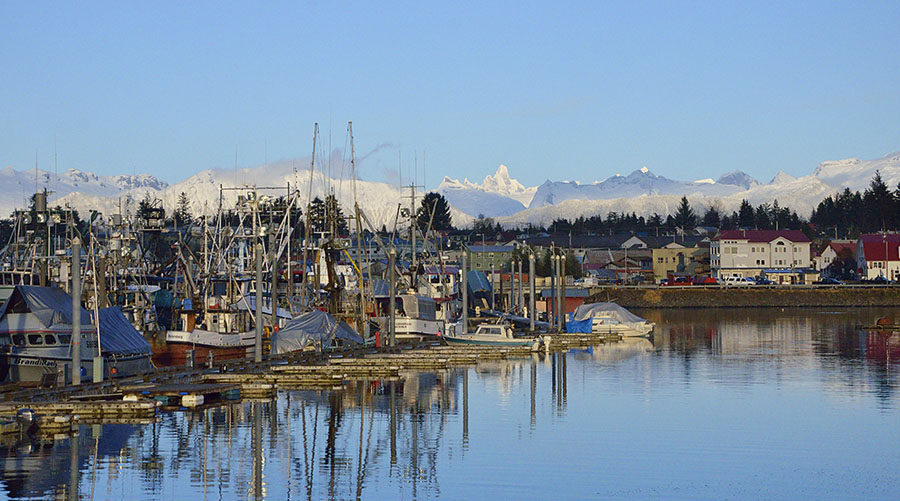 Cold clear days also mean cold clear nights, and a chance to see the aurora.  The forecast for activity was higher than usual last week, so I ventured out after midnight.  We’re lucky that we live at a latitude where we can see the aurora, but it means bundling up in warm clothing, scraping the frost off the car windows, and hoping that I remembered to set the camera up correctly.  It’s no fun troubleshooting a camera in the cold and dark – don’t ask me how I know that.  I watched and waited (and shivered) until 0130 and the lights never lived up to the forecast… but still, it’s a beautiful sight. 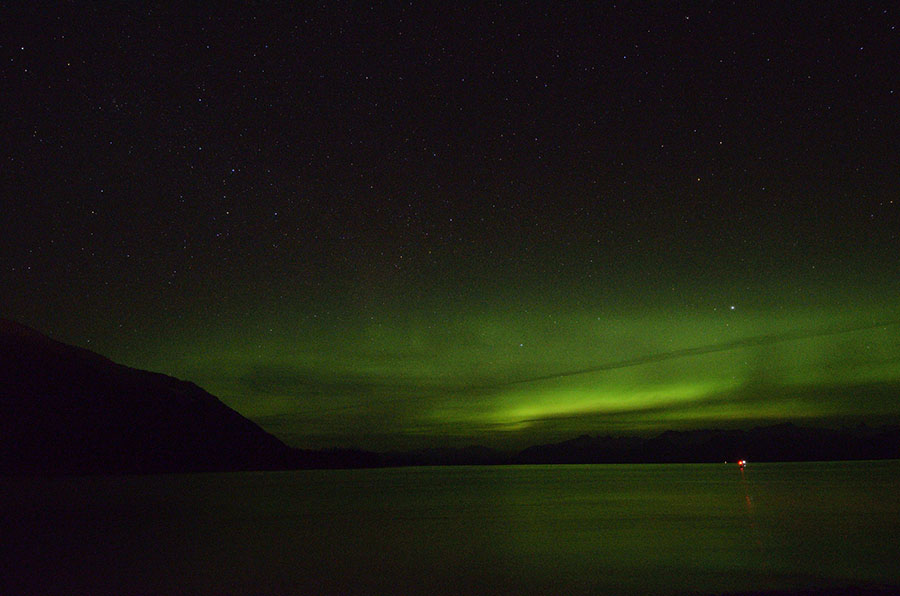 A few days ago we had some wicked NE winds, but Tammy and I were determined to go for a long walk to enjoy the sunshine.  We got out to the point and found some nice sized bergy bits grounded on the beach at low tide. 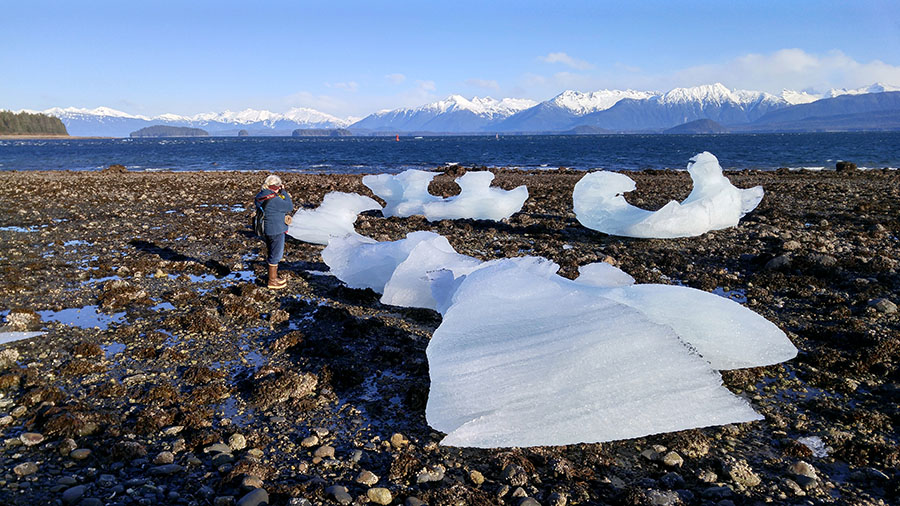 You can see Tammy standing to the left of the long bergy bit, just to give some perspective of the size of these things.  You just never know what you’re going to see around town. 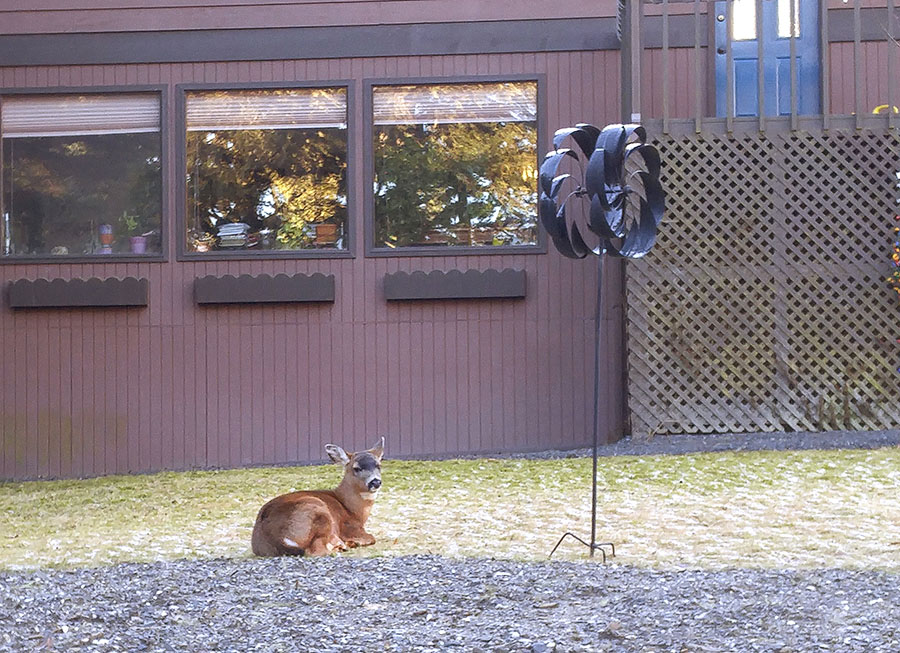