In the last post I described all the preparations for the big Homecoming of the Huna Tlingit to Glacier Bay National Park, and today I’ll show some of the festivities.

Three canoes left Hoonah on a Monday morning to make the 30 mile journey in Icy Strait.  The weather was not cooperative, and the paddlers had to endure a lot of rain and some fog, though the wind direction did allow them to sail for part of the way.  They arrived in plenty of time for the formal arrival on Thursday, August 25th, and we even got to watch them practicing the evening beforehand, chanting and paddling to the beat of a drum.

The day of the Dedication was cold, drizzly, and foggy but the mostly-Alaskan crowd is used to that kind of weather. 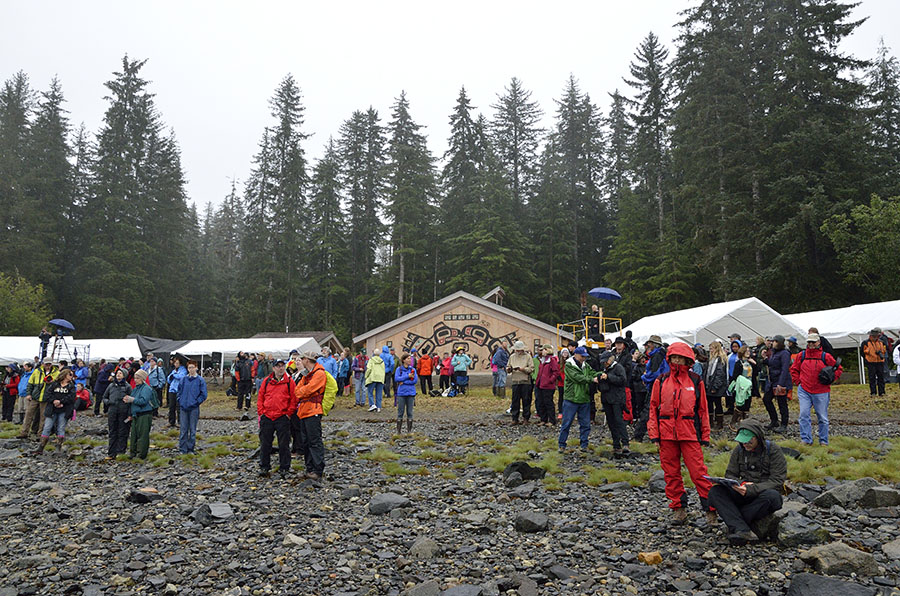 The Park Service had cameras set up around the site to live-stream the event since it wasn’t easy to be there in person.  A maximum of 24 private boats are permitted to be in Glacier Bay at any one time, plus a couple of smaller charter boats.  Some people came by air and were staying at the Lodge, and two big high-speed catamarans brought people from Hoonah.

Everything has a ritual, and the day began as we watched the elders donning their colorful regalia – explaining that the person helping them dress was from the opposite moiety (there are two Tlingit moieties – Raven and Eagle), and that helper was acting on behalf of one of their deceased ancestors.  Beautiful. 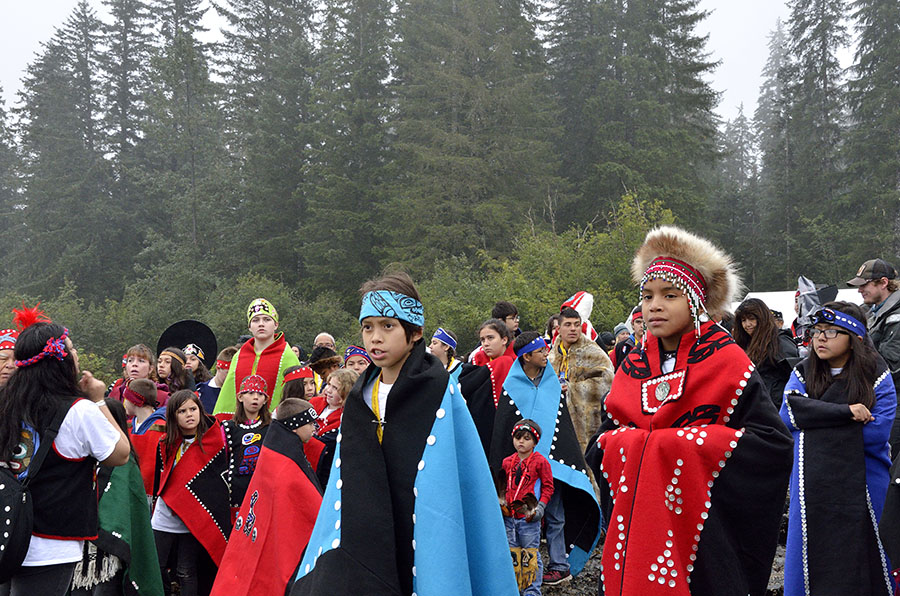 The spectators created a wide path from the water’s edge to the Tribal House, and Hoonah’s school children came down to the tide line dressed in their regalia, waiting to greet the arriving canoes.  As the canoes began their approach, a number of elders joined the youngsters on the shore. 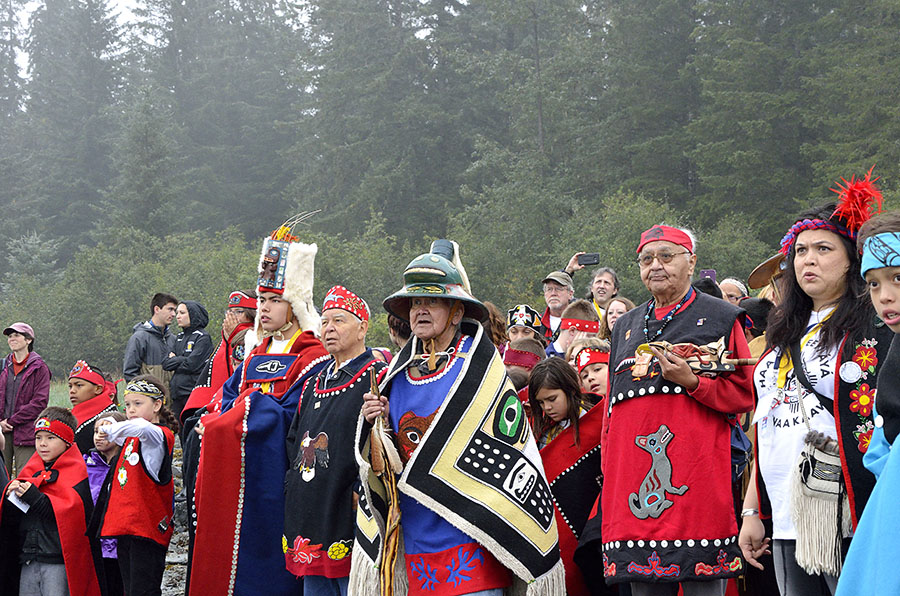 Out of the gloom, the canoes began to appear… 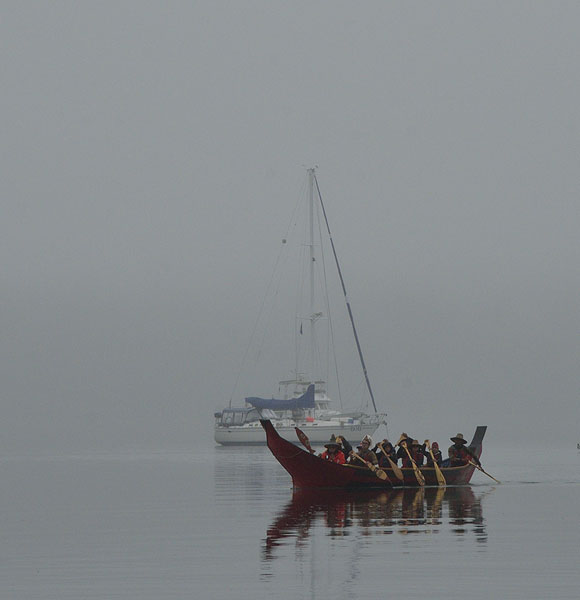 …with our friend’s boat and ADVENTURES in the background.  The drum beat and the paddlers chanted… 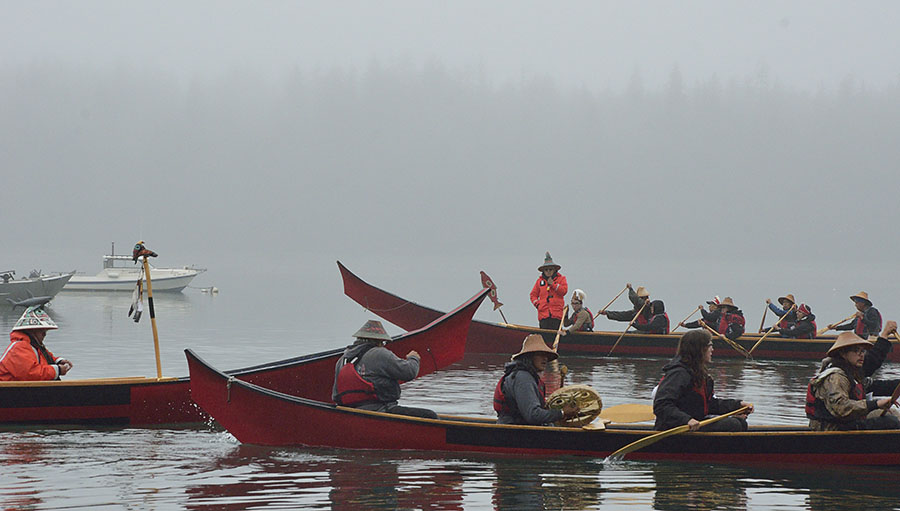 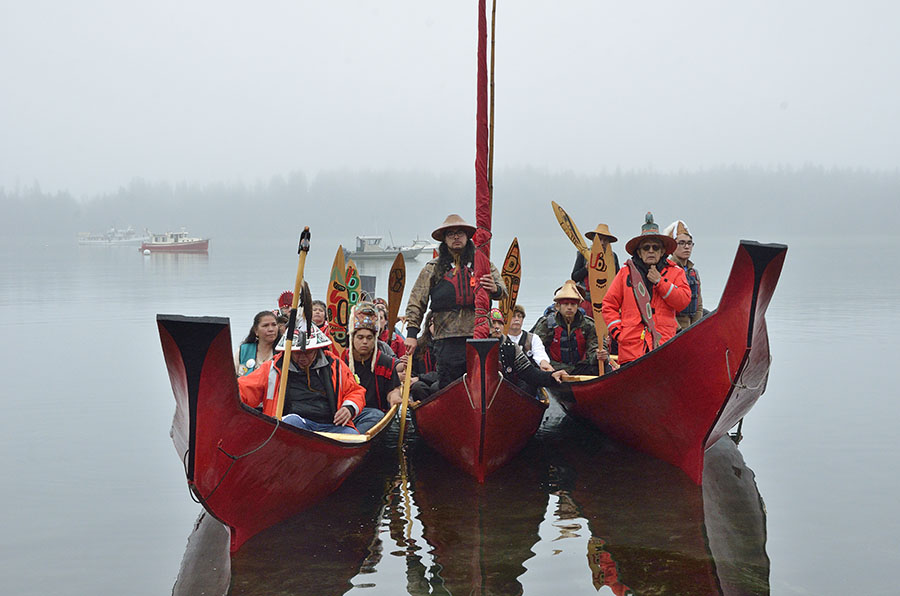 The elders in the bow of each canoe asked permission to land, and they were greeted enthusiastically. 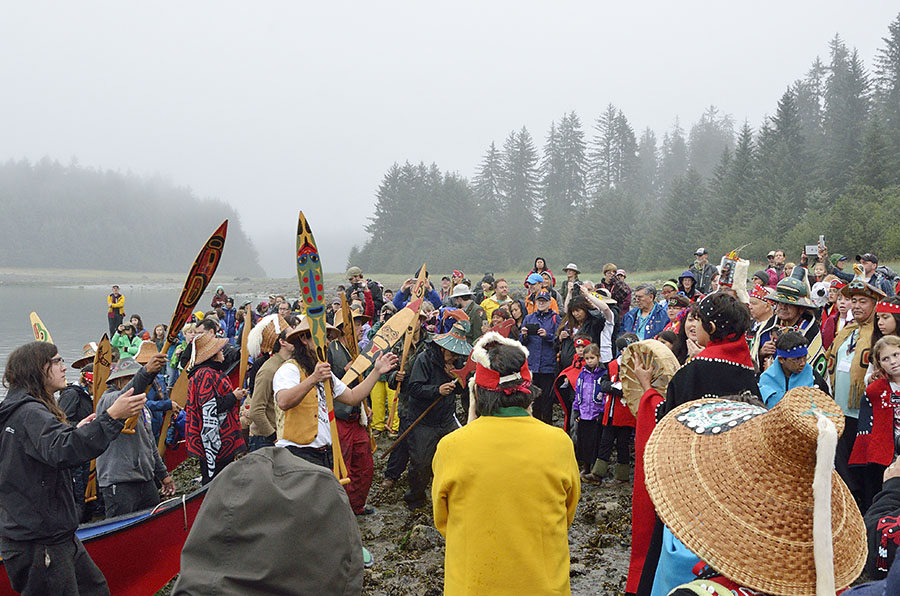 These people had worked so hard for so long to make this event happen, on top of the historic and cultural significance – it was very special for young and old. 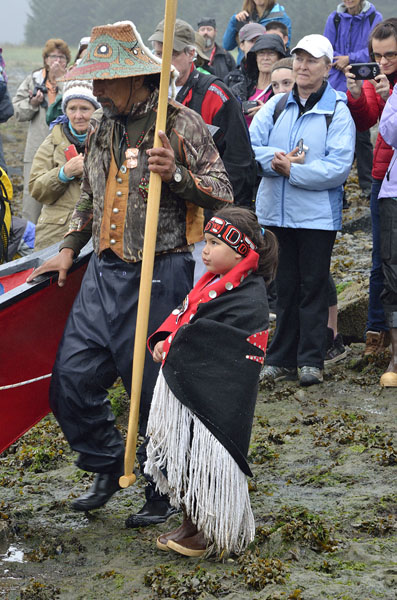 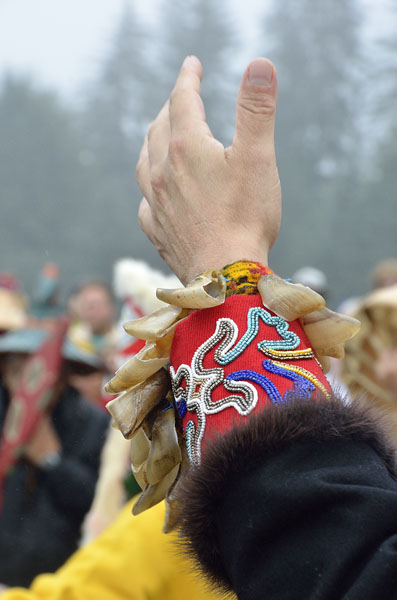 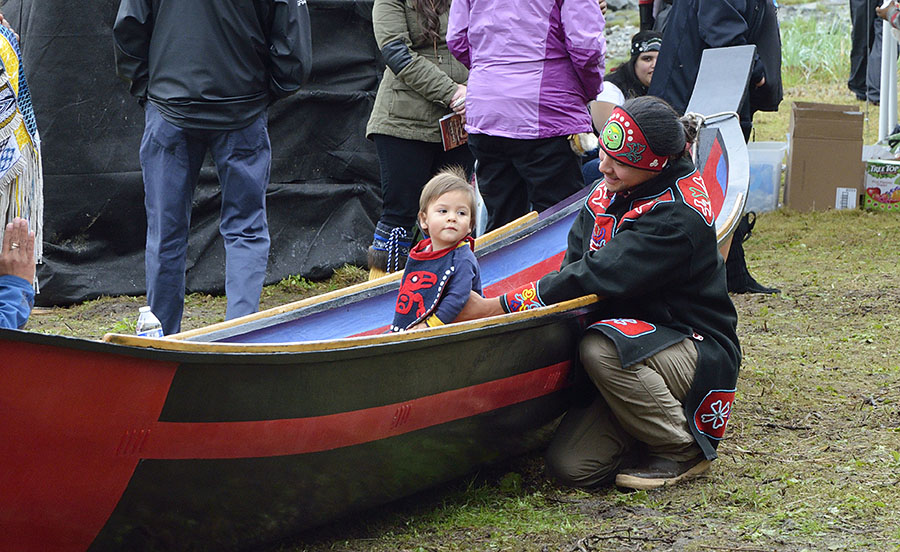 You’re never too young to have your own regalia for special occasions. 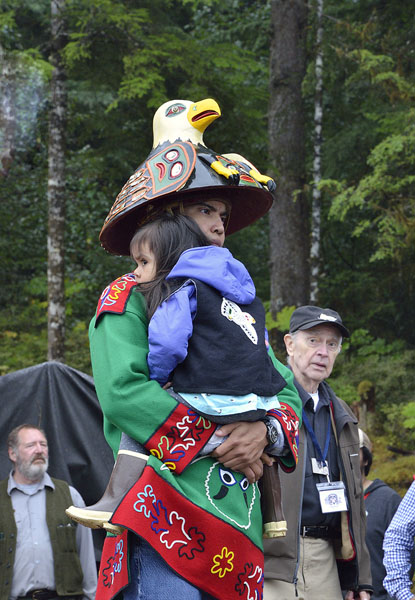 Eventually the paddlers were settled under the tents and the elders started making speeches and performing various ceremonies such as thanking the trees for their gift of the logs and wood to build the Tribal House. 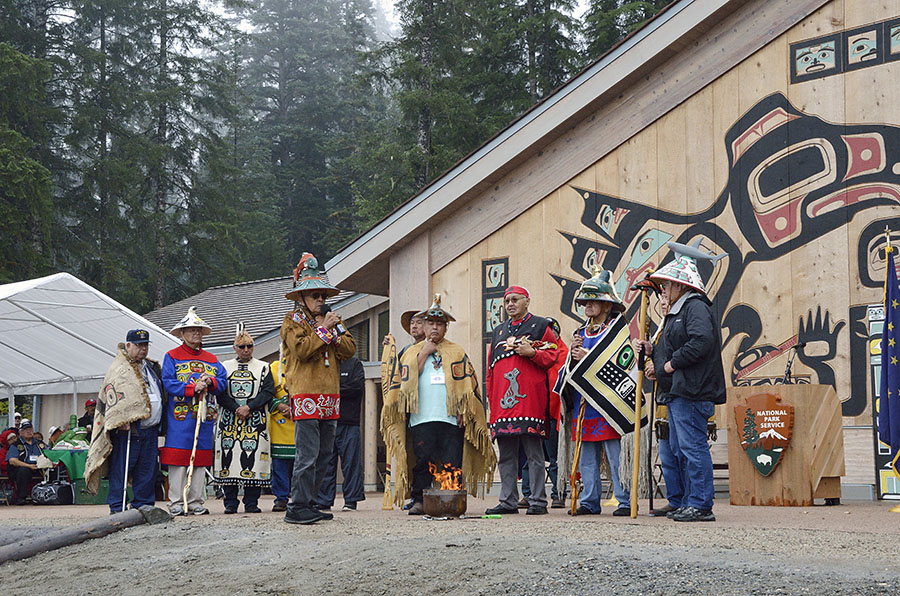 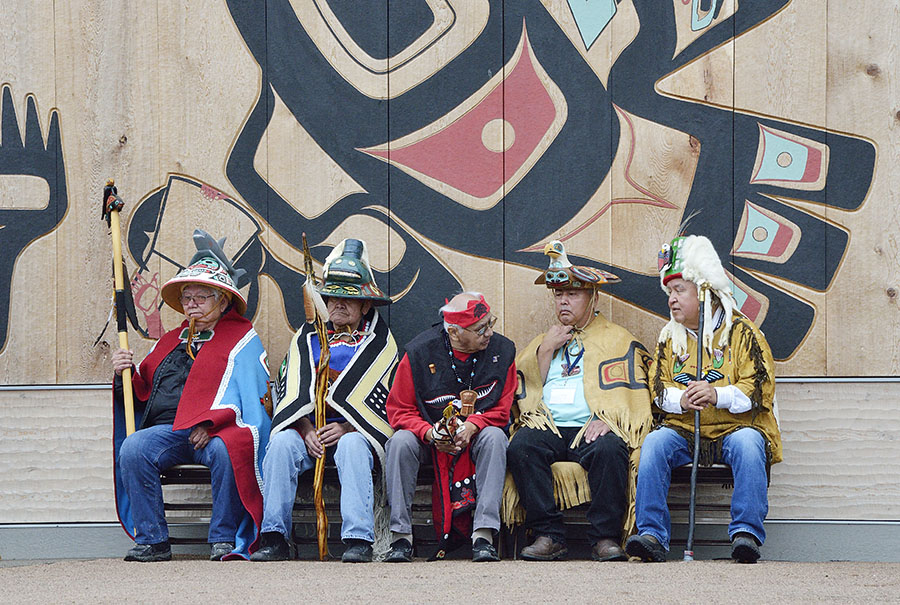 We’re learning that Tlingit ceremonies don’t have a schedule, except for the order of things.  They are a patient people, and very inclusive so other family members are often invited up to tell a story or acknowledge an ancestor – it can take quite a long time especially standing in the drizzle and cold for hours on end, but we stayed for it all – it was special to be present and to witness such a meaningful event for the Huna Tlingit. 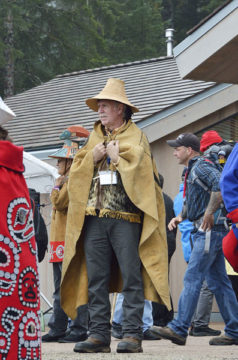 Every time we’ve been in Hoonah for the past three summers we’ve spent time with the carvers who created the 18’x45′ outside panel as well as the slightly smaller interior screen and house poles from cedar.  Gordon, one of the two lead carvers suffered an accident with a power tool about two weeks before the dedication, and we were worried that he might not be present.  We were so happy to see him, despite the bandages on his hand covering his damaged fingers.  He says he’s just a little “short handed” now.

Some private ceremonies were held in the later afternoon inside the Tribal House so the four clans represented in the House could perform their special rituals, but at the end of the day the newly-dedicated Tribal House was open for us to see. 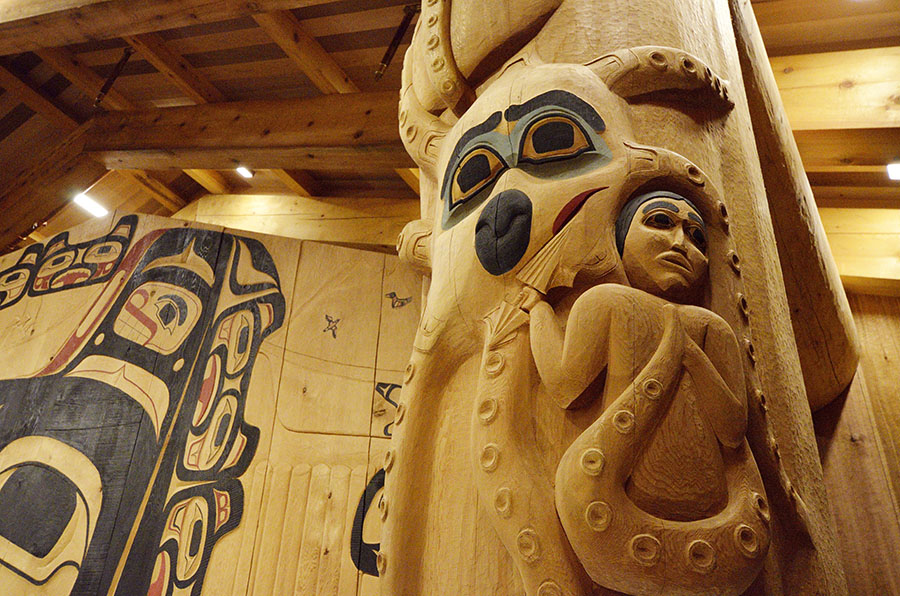 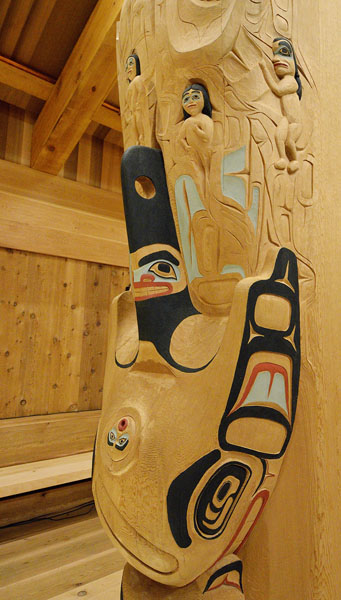 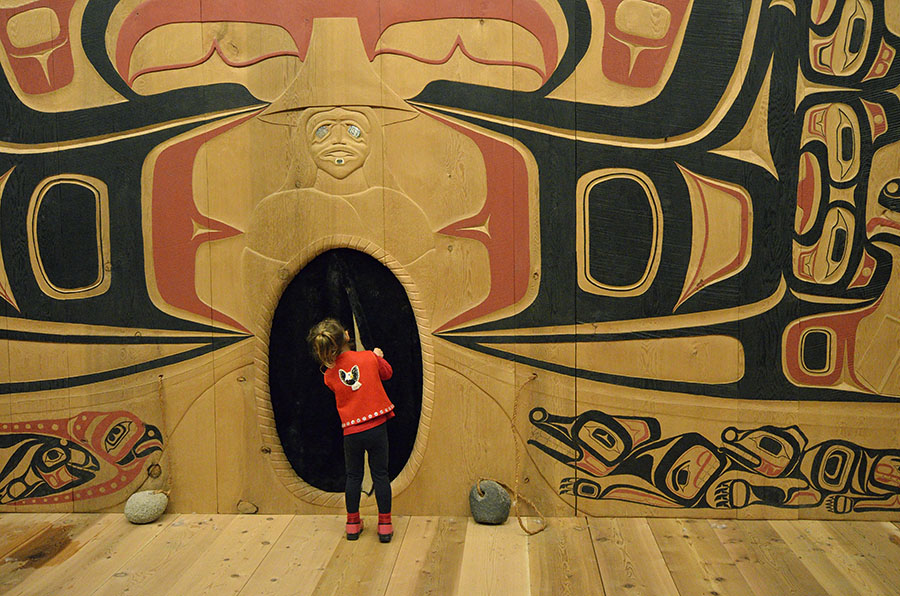 It’s a beautiful building, and although it was built in partnership with the Park Service, it clearly shows how very important the Tlingit people are to the story of Glacier Bay.  You can find more information and a short video of the ceremonies at the Glacier Bay National Park site.