If you’ve followed the Blog for awhile you’ll know that Glacier Bay National Park is one of our favorite places.  The whole place is huge – about the size of Connecticut, but the most visited section consists of a long bay branching into two arms, each over 50 nautical miles long.  You can only see the bay by boat or by air, and the Park limits the number of boats during the summer season to preserve the feeling of remoteness and solitude of this grand place.

The park has many moods depending on the weather – shy and mysterious when it’s overcast and misty, or bright and brash when the sky is clear and you can see 15,325′ tall Mount Fairweather and the other distant mountains on the ocean coast.  Regardless of the weather, we love the park for its density and variety of wildlife.  We can see the same animals in other parts of southeast Alaska, but not as many of nearly everything in one place. 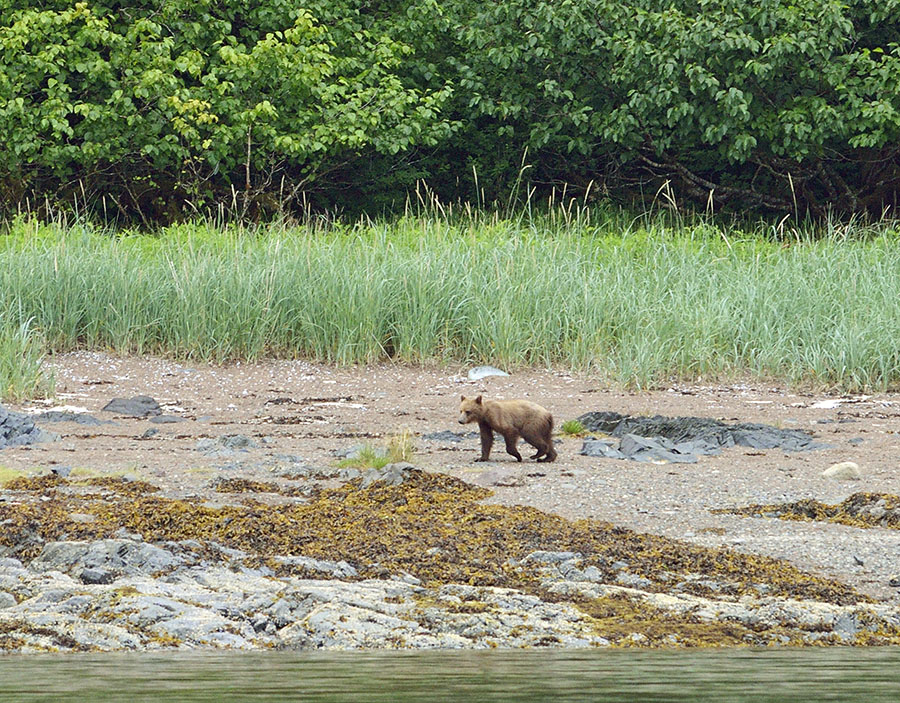 The park has brown bears (such as this sub-adult in the photo above) as well as black bears.  We’ve even spotted a glacier bear – a rare gray-blue morph of the black bear.  We’ve watched a brown bear sow teaching her cub to swim and we’ve watched a sow nursing her cubs.  As this was our first visit to the park this year, we had to stop at the ranger station for a mandatory boater briefing.  It’s always a treat to go ashore and stretch our legs, so we took a walk between the beach and the forest, not far from the park campground.  We were talking and making noise when I spotted a sub-adult black bear just 30′ away, watching us from behind the trees. 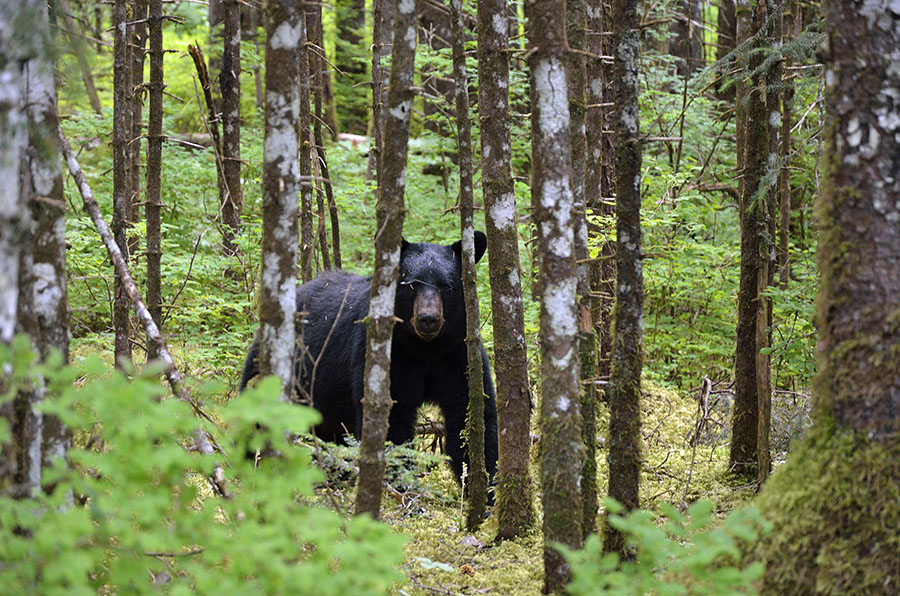 Usually a bear will avoid humans which is why it’s important to make human noises when you’re in bear country (and the majority of southeast Alaska is bear country).  We were a little bothered by this bear – he should have been more afraid.  We stood close together to appear larger, and we firmly told him to go away.  He finally did, flattening his ears, huffing, and running deeper into the woods.  We warned a few tourists that we saw on the forest trail, urging them to clap and say “Hey Bear!” as they walked, but most did not.  Unfortunately stupidity on the part of humans usually results in a bad outcome for a bear. 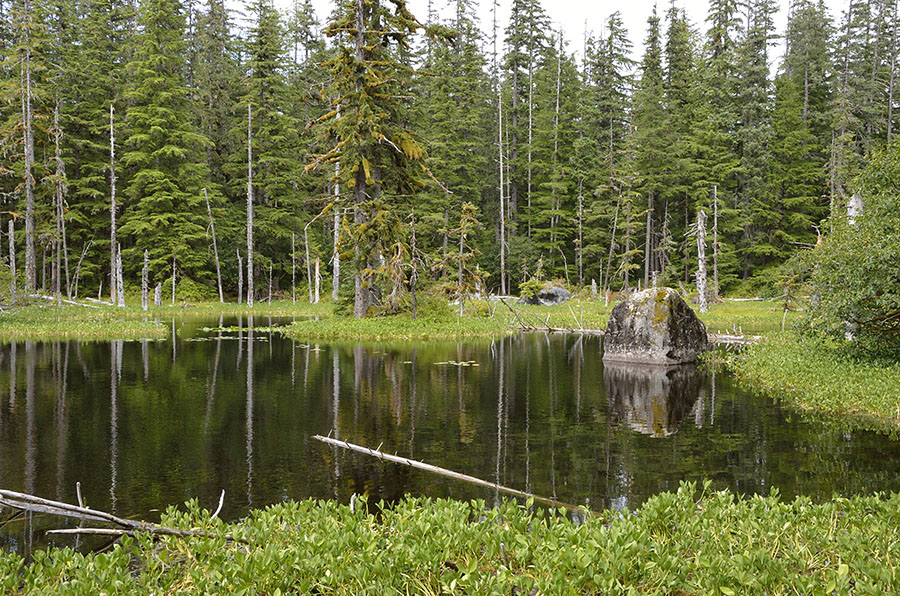 Whales were around, but not as plentiful as we’ve seen during other visits.  We also heard reports of orca sightings on the radio, but always somewhere far from our location.  Heading up to South Marble Island, we were guaranteed to see masses of Steller’s sea lions, puffins, pelagic cormorants, and nesting gulls and kittiwakes. 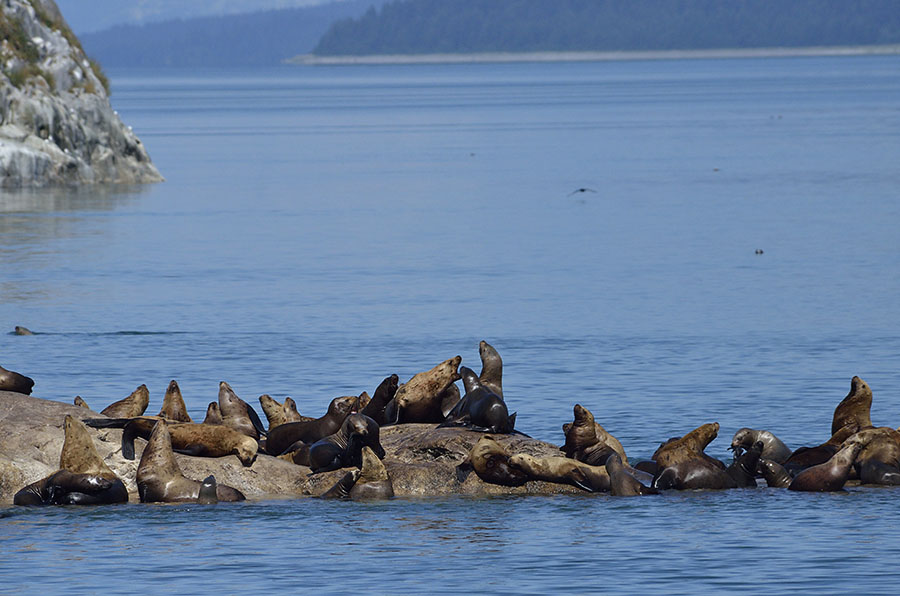 Sea lion haul-outs are great places to watch and listen.  Many of the sea lions are trying to nap, but it doesn’t take much to get someone ticked off at someone else, and then the barks and groans rise to a din while the kerfuffle is sorted out.  Things will settle down to softer groans for a few moments until it starts up somewhere else.  There was a big bull we nicknamed Jabba The Hut since he looked just like the Star Wars character, but I love the young ones best – zipping around in little groups, cavorting and frolicking and generally showing off. 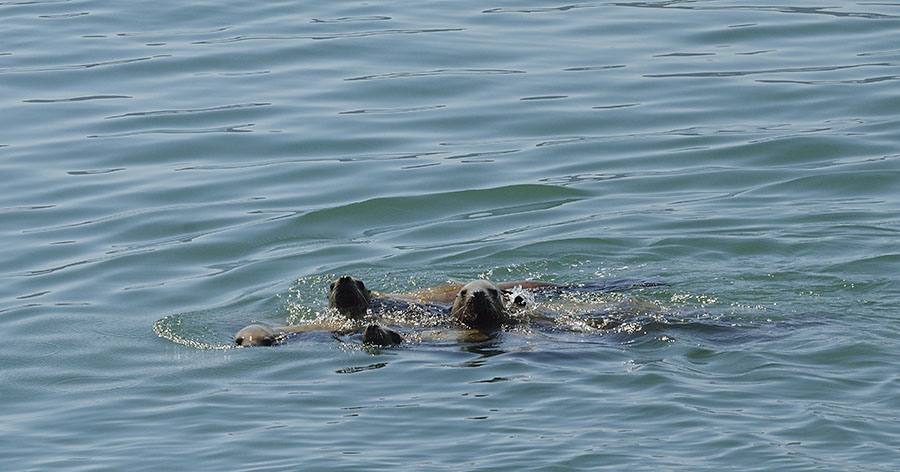 The puffins are some of my favorite birds, and we mostly see the tufted puffins here.  They’re like blond surfers, shaking their heads to show off their golden tresses. 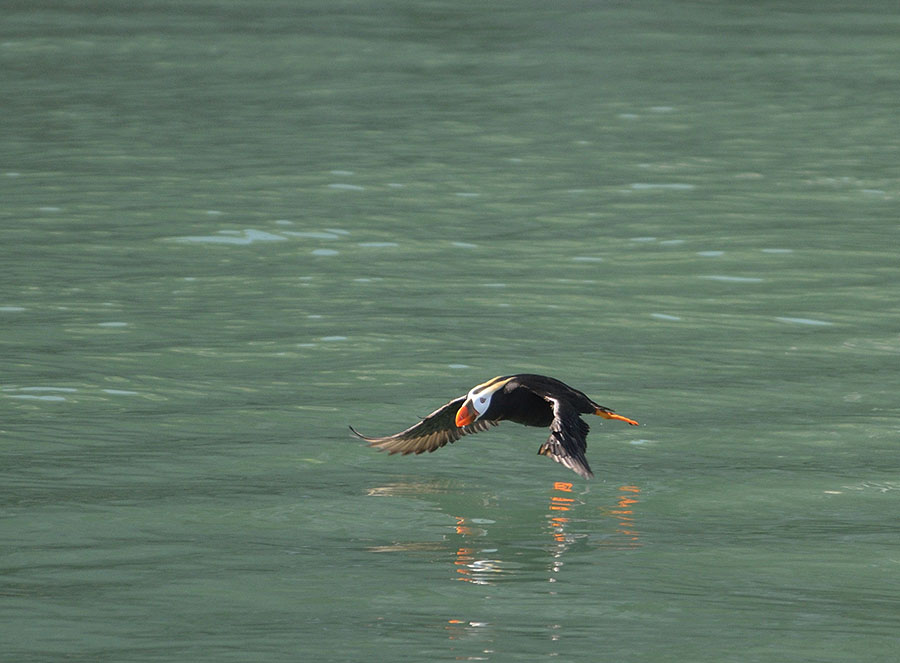 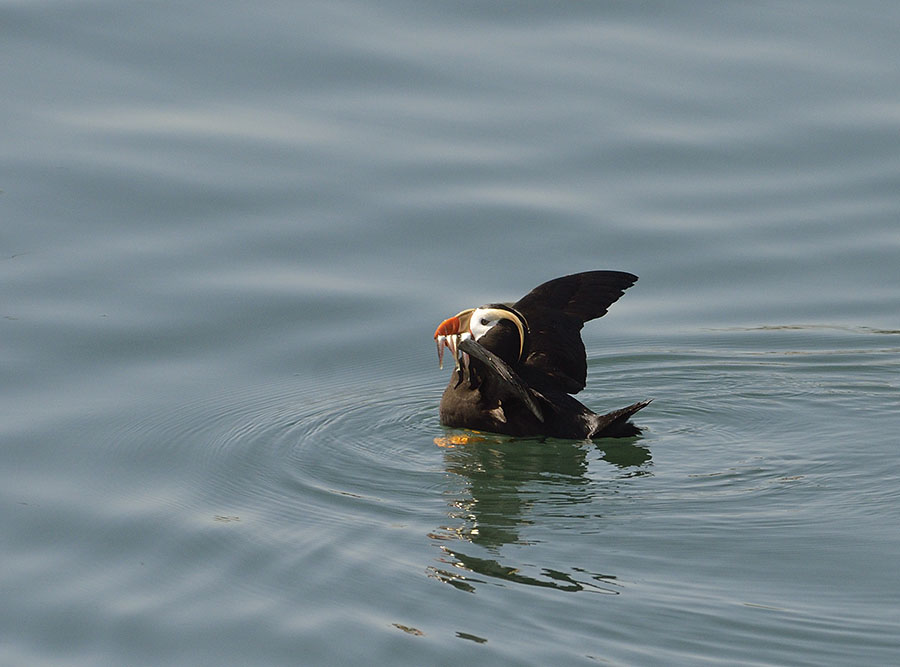 The puffins live at sea for most of the year, returning to make their nest in burrows on the side of the hills just for the summer. 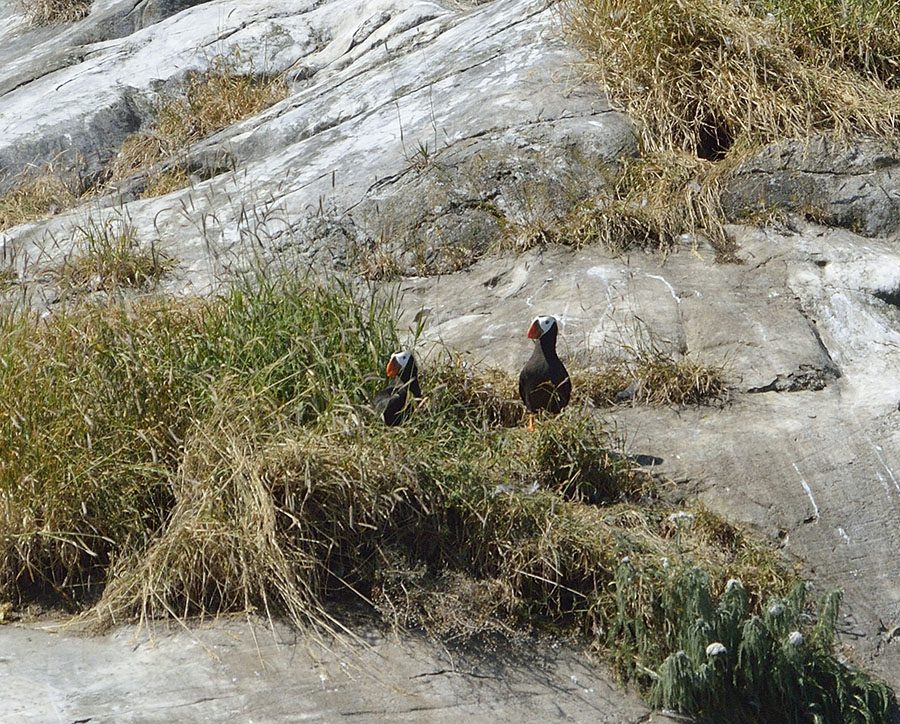 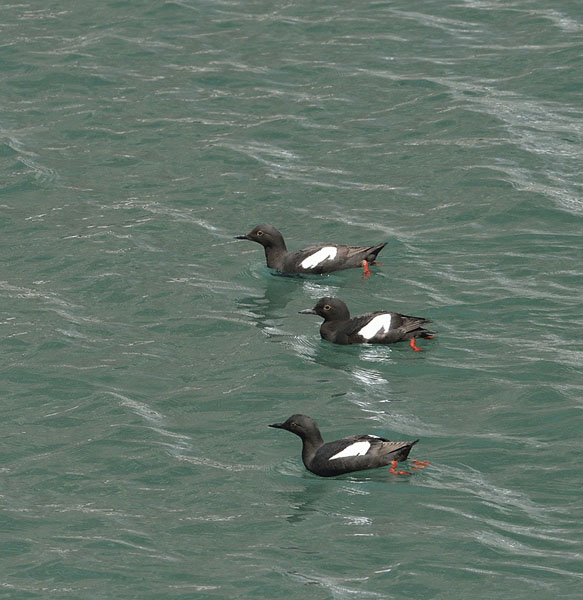 Sea otters are adorable, despite the fact that fishermen hate them because they can eat up all the crabs and clams in an area in short order.  They’re much bigger than you would think, about 5′ long, and I love how they hug their pups to their chests. 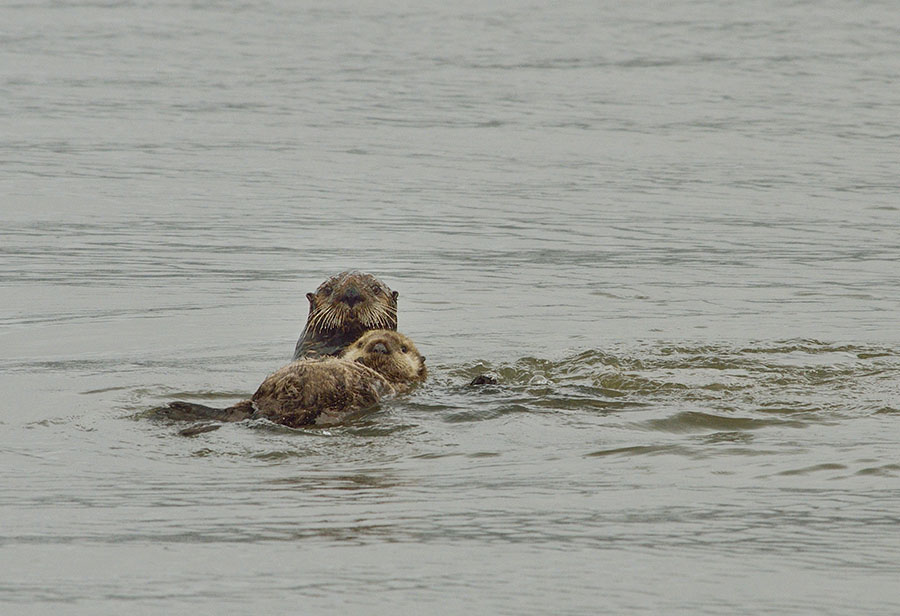 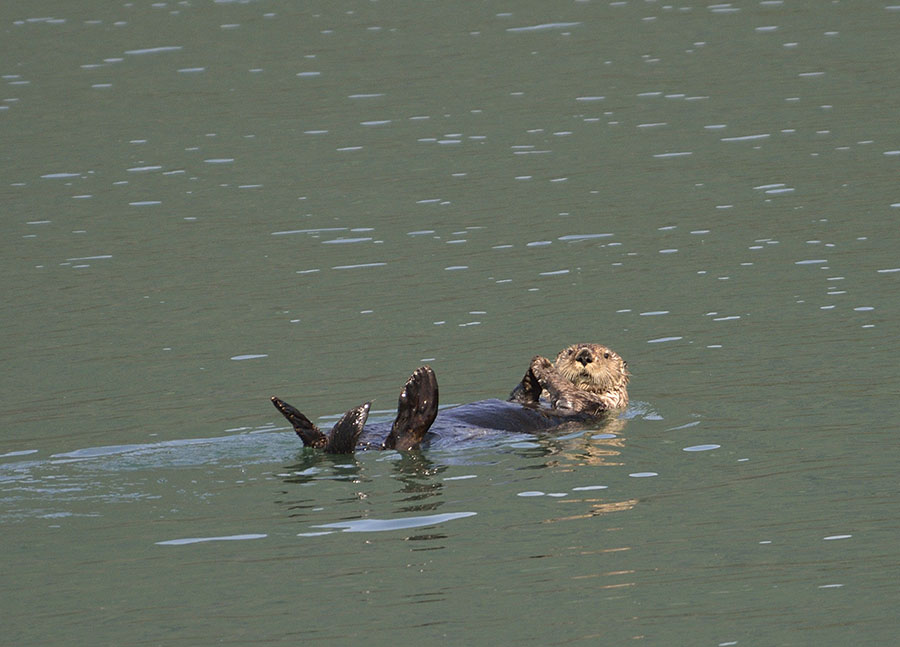 Mountain goats are another favorite of ours, and there’s a particularly good spot to look for them called Gloomy Knob.  The wool from their coats is used by Native Alaskans to weave Chilkat blankets, and as a knitter I’d love to get my hands on some of their wool to play with.  This year we stopped at the Knob on a hot sunny day, and some of the goats we spotted were hiding in the shade or in small caves to keep cool. 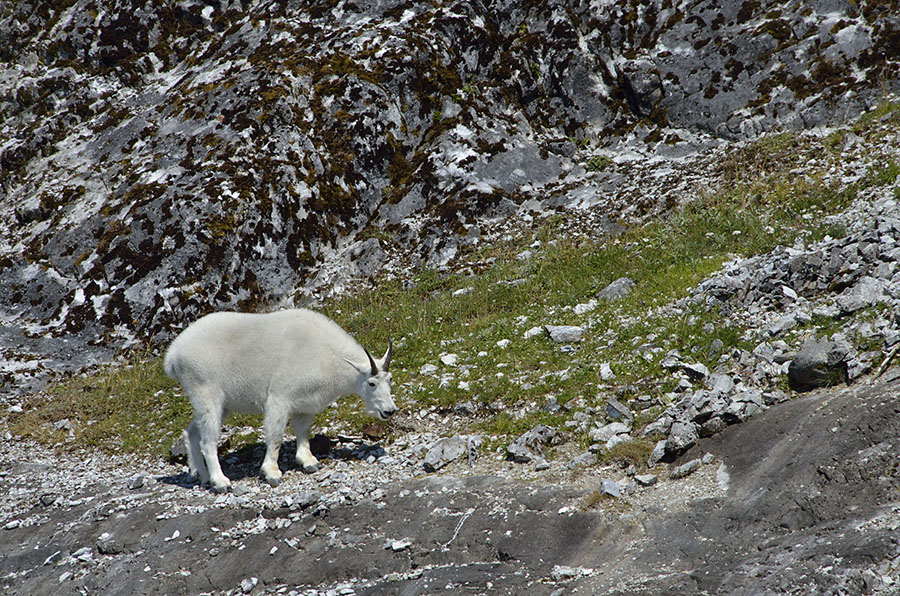 It’s amazing to watch them negotiate the steep rocks with their specialized feet and powerful muscles. 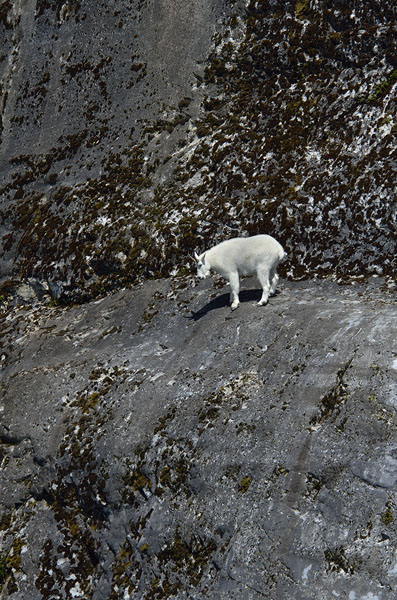 Many people come to Glacier Bay to see the glaciers, but we love it best for the wildlife.  I promise the next posting will be about the ice – each glacier has its own personality, and we had good accessibility to them this season.

2 thoughts on “Wildlife of Glacier Bay”