Leaving Pelican, we were once again exploring new territory – something I particularly like for the challenge and the unexpected.  Here’s our path southwards from Pelican down to Portlock Harbor on Chichagof Island. 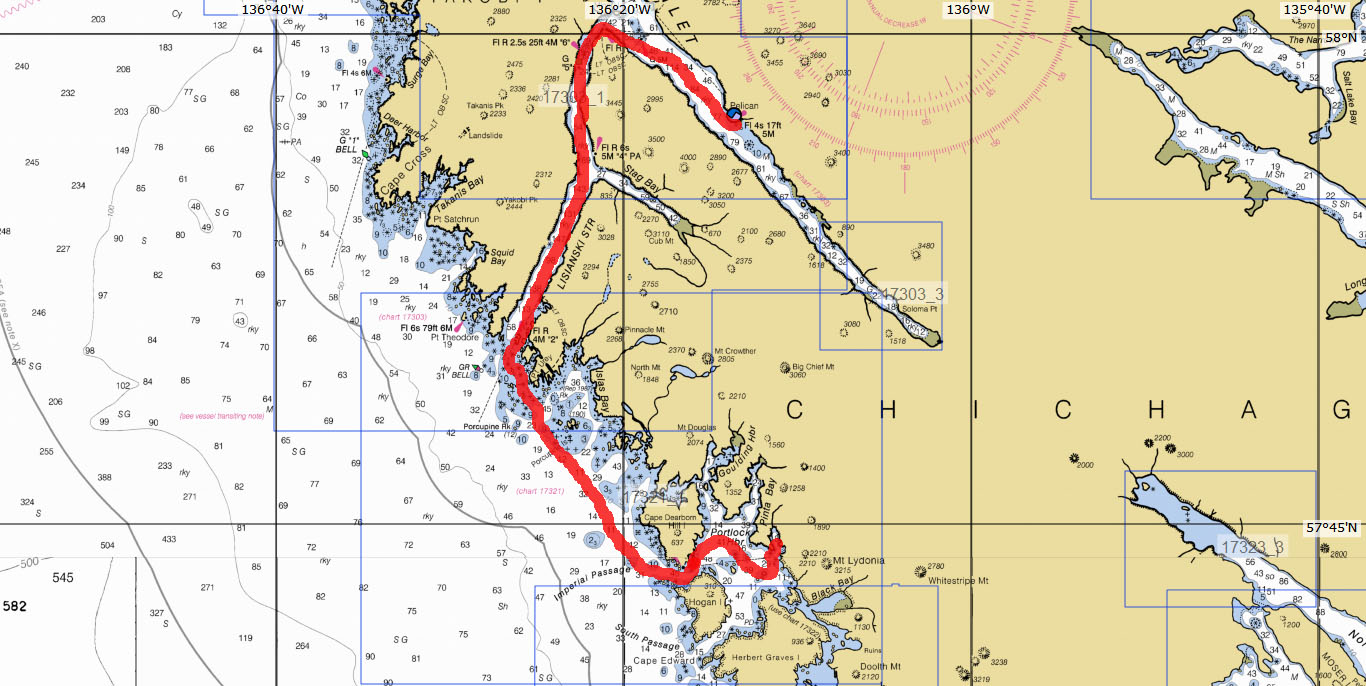 Even though we were cruising the ocean or “outside” coast of these big islands, there are a number of routes and passages that offer some protection from the ocean swells.  One such passage requires winding through rocks – which looks pretty daunting on the chart! 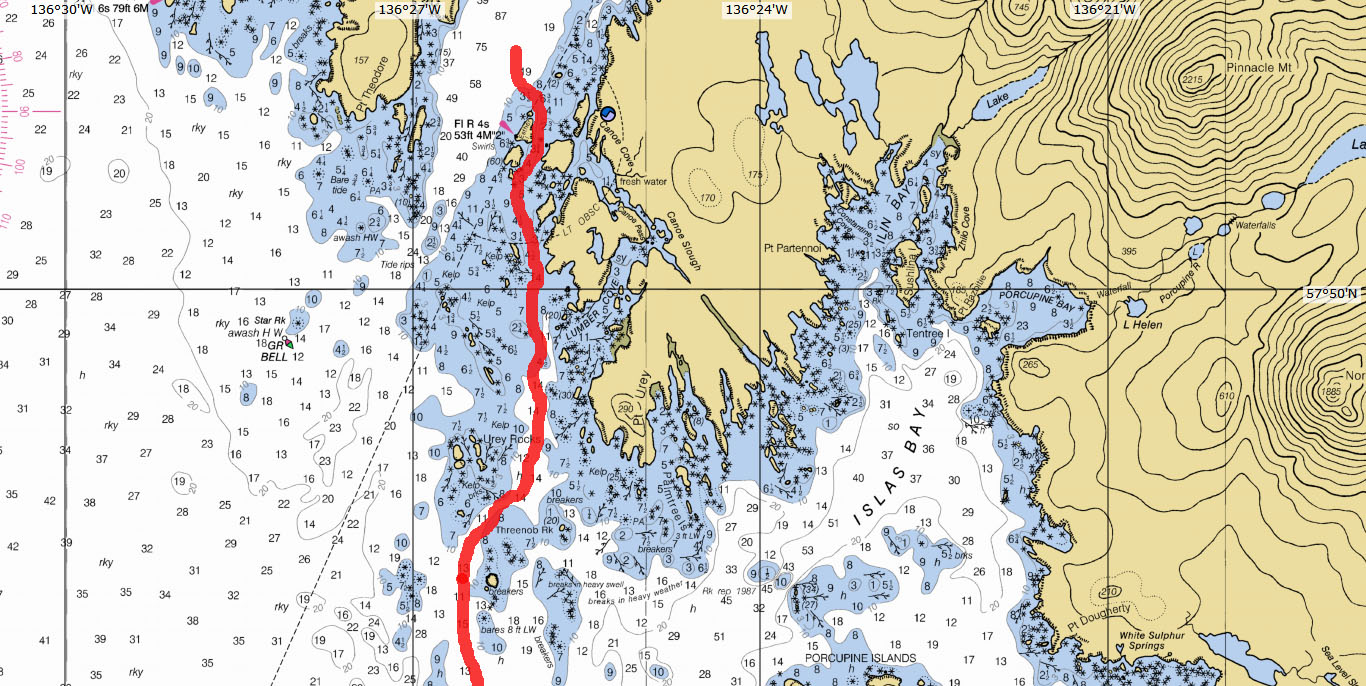 The blue areas are shallow water and all those little asterisks and dots are rocks, yet this is a good passage used by fishing boats all the time.  The worst part was at the beginning when we had to pass very very close to a rocky island, but the depth sounder confirmed that we had plenty of deep water.  Watching the waves breaking on the outer rocks made us glad for the protection of this wiggly passage, and I felt much better about it when we passed a 91′ fishing tender.  Part of the trip we were in the open ocean, and we’ve learned to stay out in deeper water where the waves are smaller.  Our reward was a gorgeous anchorage that we had all to ourselves for a couple of days.  And my first kayak exploration of the creek right in front of us revealed salmon and bears! 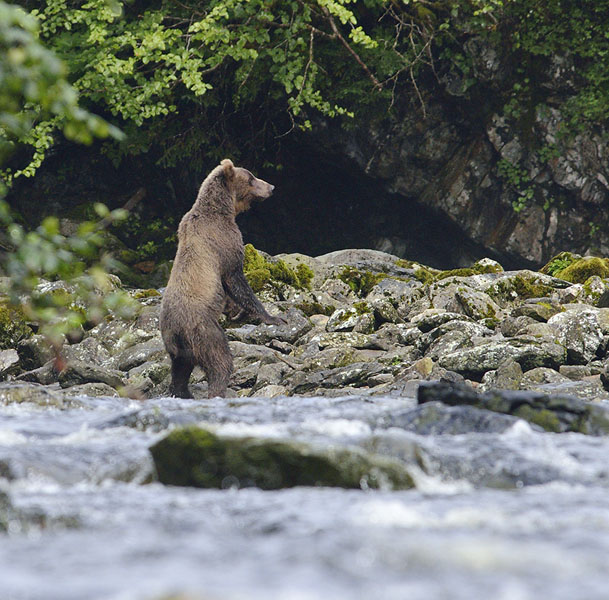 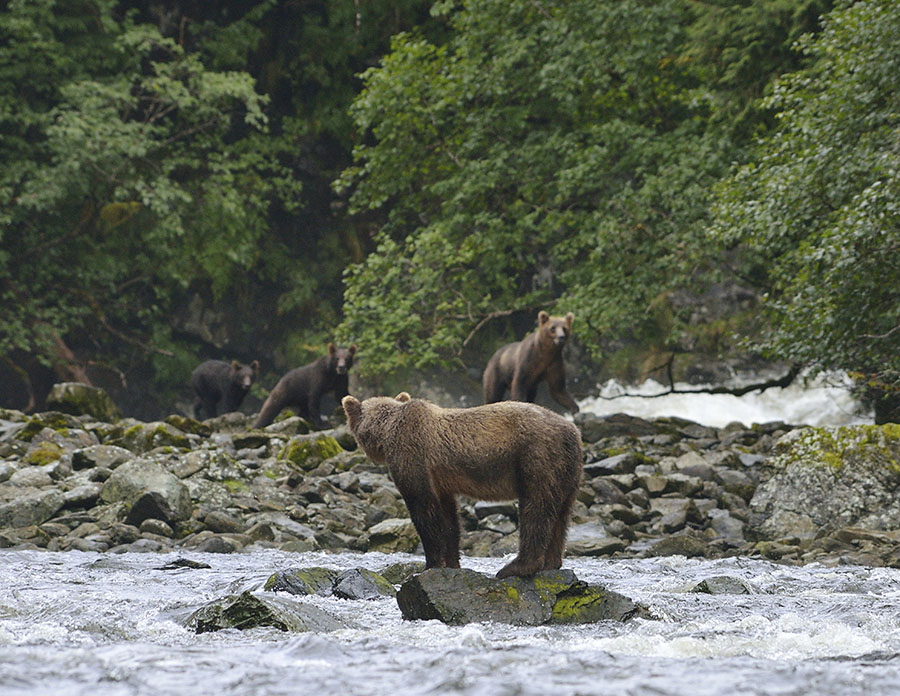 Bears have a definite pecking order, and they’re always looking around to check for other bears arriving.  The sow and her two cubs in the background didn’t want to be around with the bear in the foreground, so they scampered back into the woods.

Our favorite was this bear that sat on a rock at low tide for ages, not really hunting for fish… just watching the world go by. 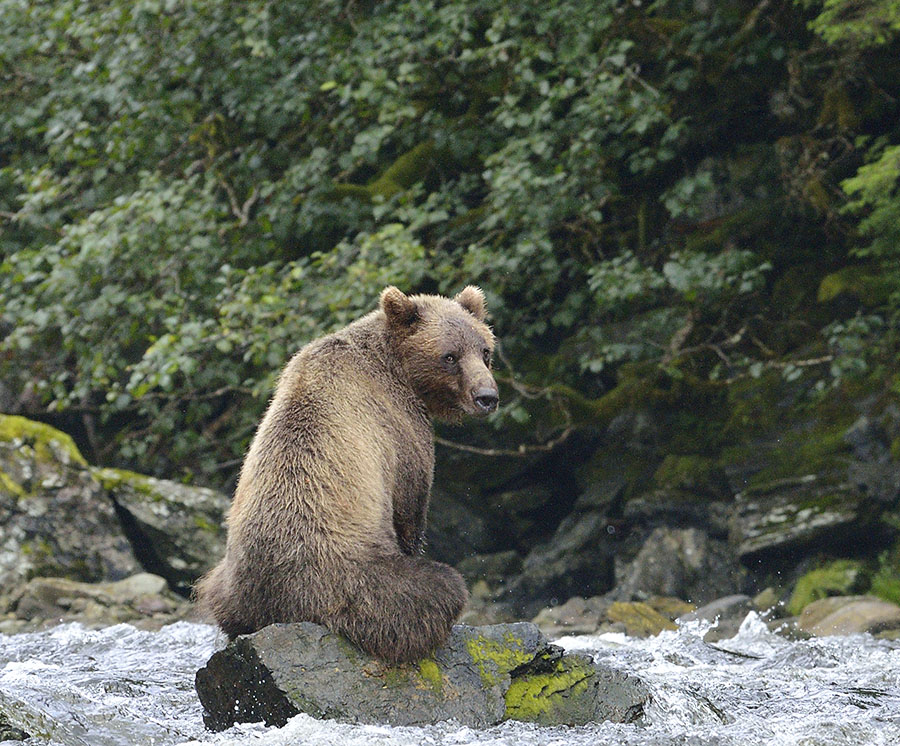 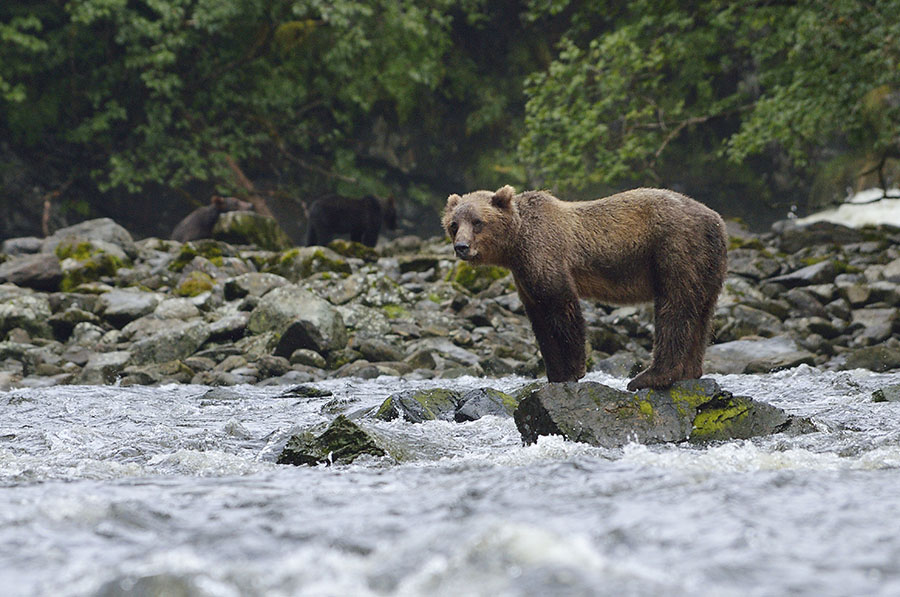 We’ve watched bears long enough to appreciate how expressive they are with their ears – amazing animals.  But the weather was going to change and we had a good window to run further south down the coast. 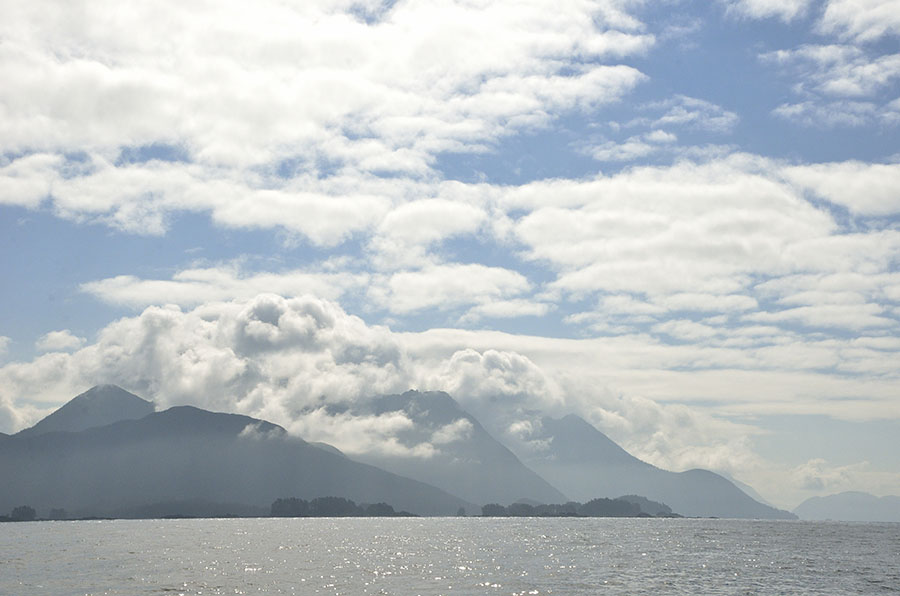 We decided to check out Kalinin Bay on Baranof Island, about 20 miles north of Sitka. 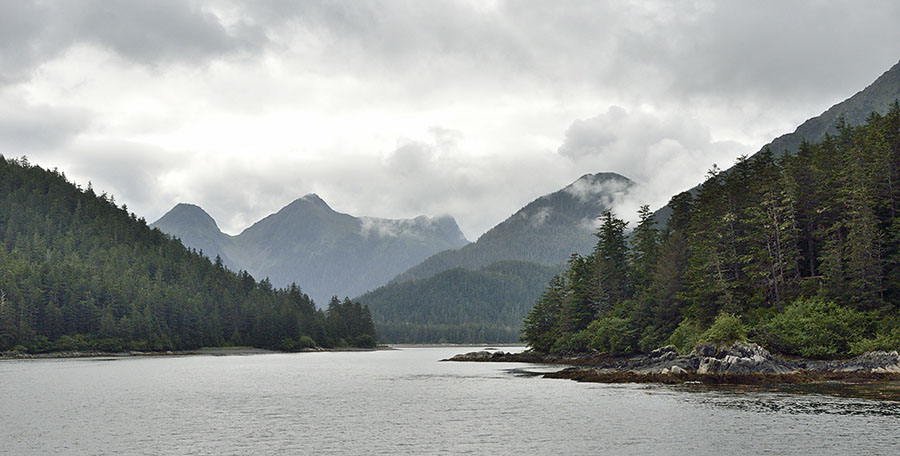 Kalinin Bay, like so many of the anchorages up here, is surrounded by beautiful mountains.  It has a large estuary at the head, and at high tide I could paddle farther up the salmon stream and get even better views.  There were many obvious signs of bear activity on the shoreline – not surprising since it was a good salmon stream.  The fishing would be better for the bears at low tide, though I made sure to be noisy and watchful and carry bear spray. 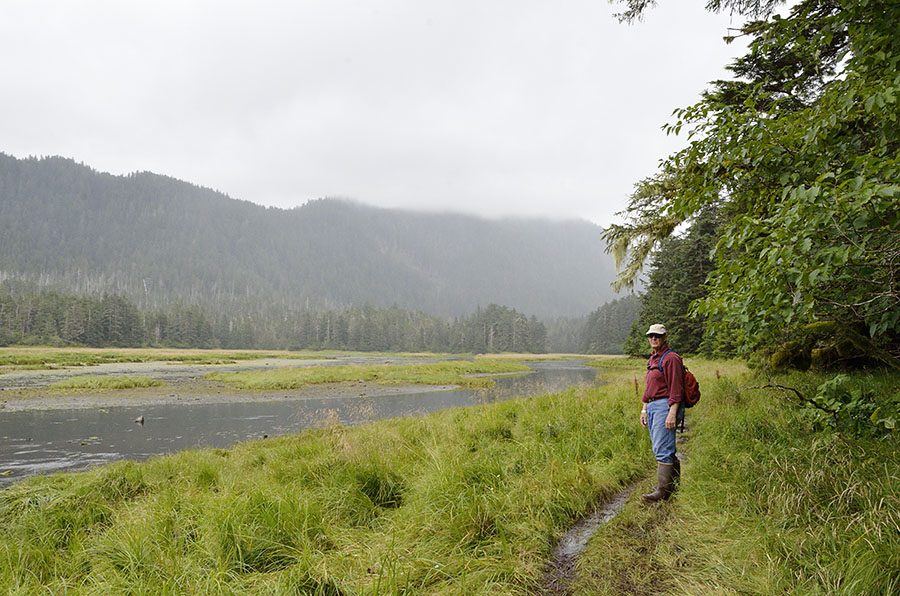 You can see part of the estuary here, since one of the reasons we came to Kalinin was to hike the trail over the ridge to Sea Lion Cove on the ocean side.  The first section of the trail runs along the estuary and it was a muddy slog, walking next to bear nests and the flattened grass where the bears like to fish.  What we didn’t realize was how steep the trail is – it’s 5 miles round trip, and we figure we hiked about 1500′ in ups and downs each way.  The trail crews even created a nice staircase from huge logs… 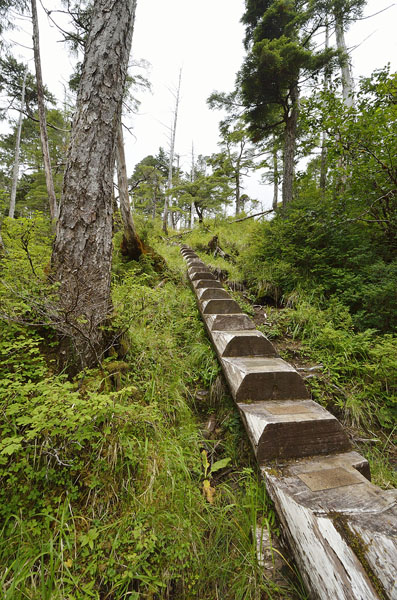 When you hike in bear country, you carry bear spray, stick together, and you make a lot of noise the whole time – bears will very happily avoid you if they know where you are.  We were hoarse from saying “Hey Bear!!” for hours on end, but it’s worth the effort.  Besides, we had a bear escort on the trail – there were rather fresh bear prints in the mud, going the same direction we were, for the entire length of the trail.  That’s Jim’s big hand, for comparison. 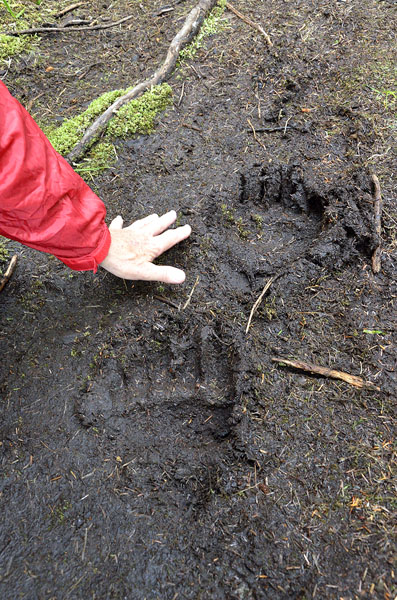 The view at Sea Lion Cove was dramatic – with hundreds of logs flung high up on the beach from vicious storms. 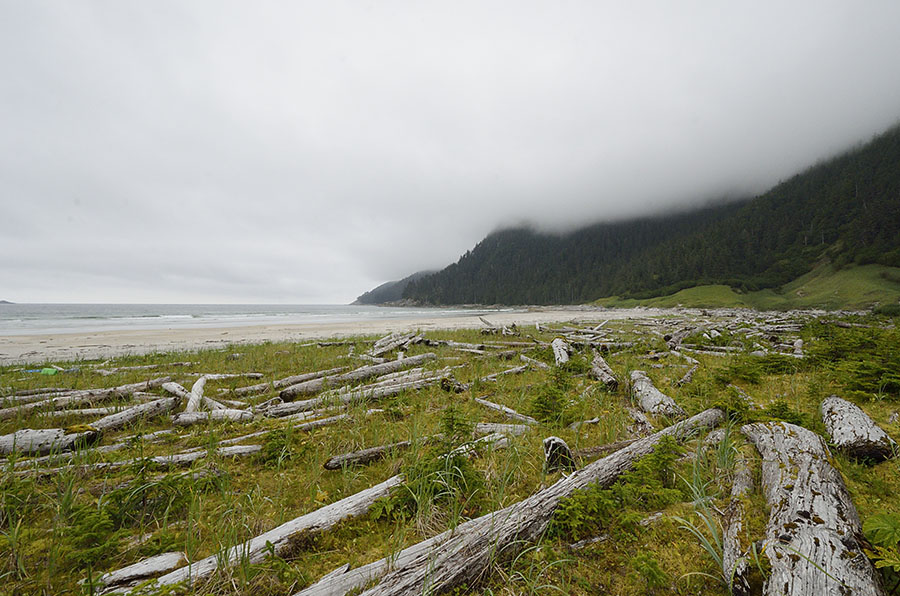 We’ve heard that the surfing can be good here, and that some people from Sitka will hide their surf boards in the woods.  As we finished the hike we ran into two guys who were heading over the ridge to surf, dragging rather large surfboards with them – I can’t imagine making the difficult hike dragging a surfboard!  Jim found this boogie board and thought about giving it a try…  but he said he forgot his bathing suit.  Maybe next time. 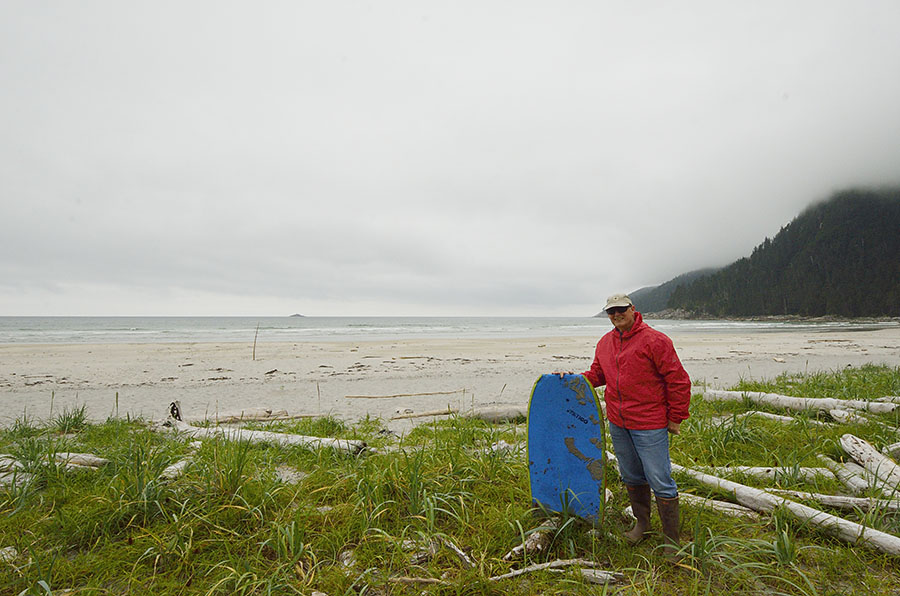 It was an interesting hike, but a hard one with all the vertical and then the muddy finish.  I was so tired by the end that I managed to slip into two deep mud holes – thank goodness we took the kayaks ashore.  I had to hose myself off on the swim platform – such a mess!  We sat an extra day afterwards since the weather was nasty, and then it was time to catch up on some laundry and groceries in Sitka.