We had a sunny day for our departure from Funter Bay, but the wind was up and the waves were getting big so we decided to divert to Pavlov Harbor in Freshwater Bay on the east side of Baranof Island to get some relief and to check out a new place. 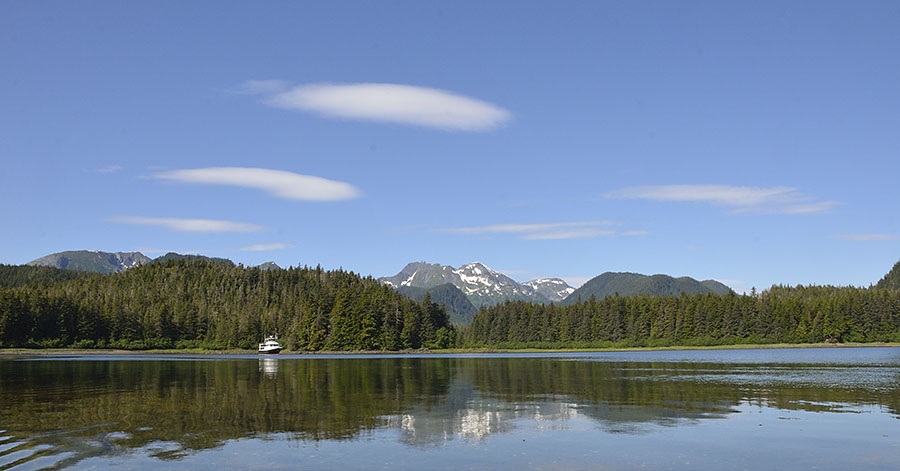 The photo shows something that continues to amaze us – everything is so big up here.  Anchorages often look a little small on the chart, but when we measure distances it’s clear that the place is huge… and we are made to feel so very tiny.

Pavlov Harbor has a wide waterfall that is the outflow of Pavlov Lake located a short hike through the woods.  It always feels good to stretch our legs and get ashore since weather or lack of good shore access sometimes keeps us aboard. 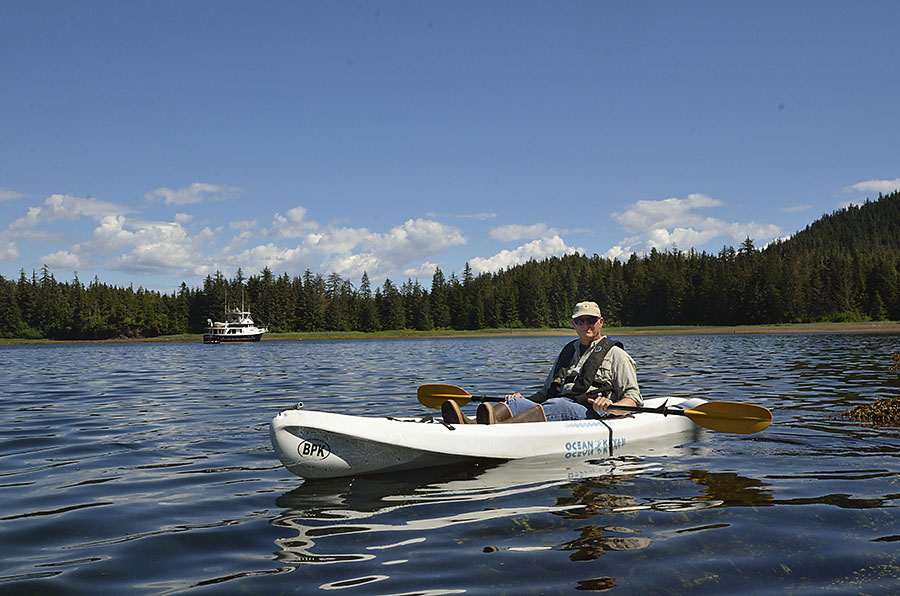 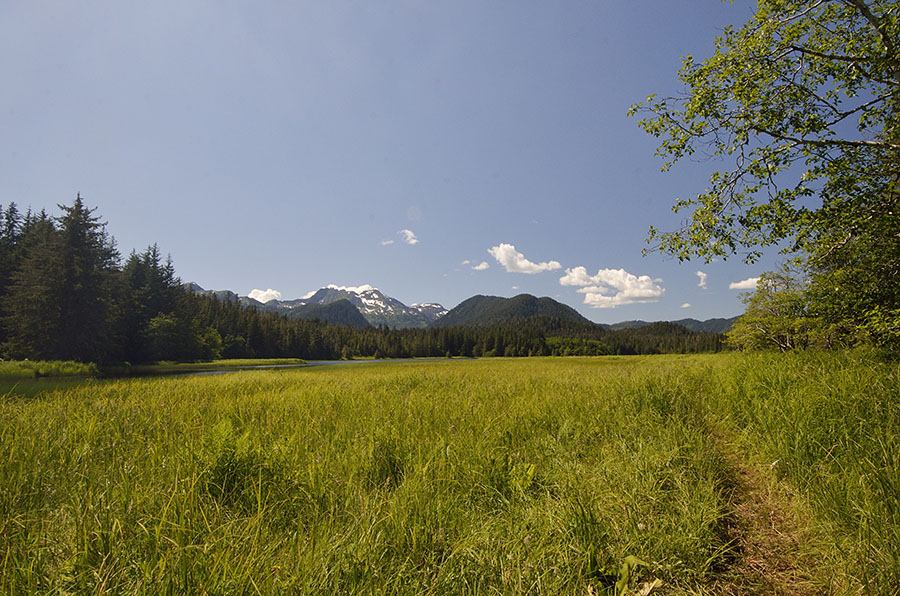 Surrounded by meadow grasses, the lake was very pretty with clear views of the mountains.  You can see a “social trail” on the far right – used by wildlife as well as humans…. and it’s always important to be aware of bears. 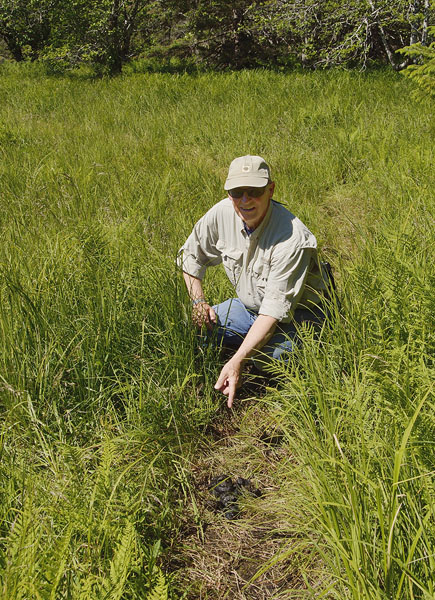 The bear scat wasn’t fresh, but it reinforces the need for good habits on the trails – talk loudly, clap sharply, and make our presence known so we don’t surprise anything.  Bears don’t want to be around humans so if you let them know you’re around, they will stay away.

There was a good sized beaver lodge on the creek, and it’s amazing to see how efficient the beavers are in cutting down trees.  Their cuts are consistent, neat, and precise.  This was a small tree, but their lodge had some larger ones – imagine the power of those jaws! 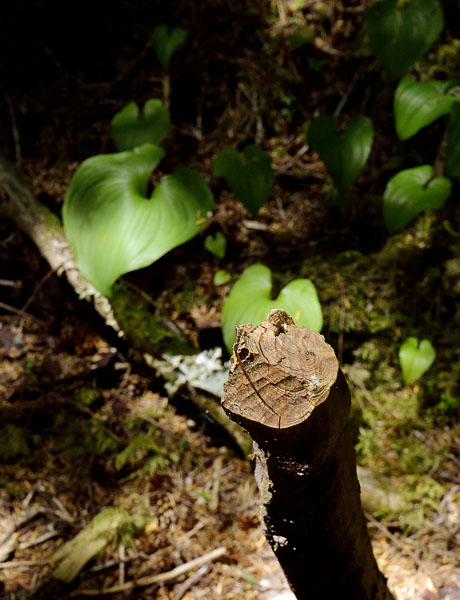 A redbreasted sapsucker entertained us for a while in the forest, though it was a bit dark for a good photo of him.  The devil’s club is growing well, with leaves about twice the size of my hand.  Devil’s club isn’t something you want to bump into – it’s covered in fine prickles, but it’s a valuable medicinal plant for the natives, and you can brew tea from the roots.  The cone of green in the center will turn a beautiful bright red in late summer. 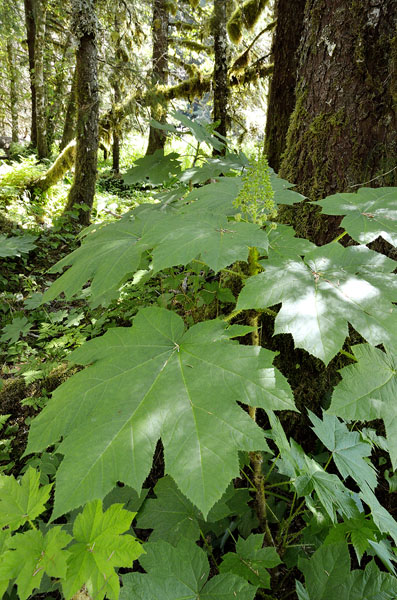 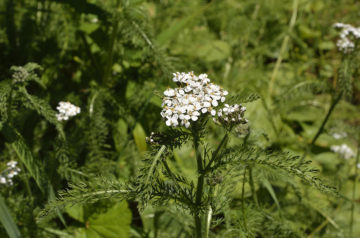 We’re having a nice warm summer so the berries are already starting to ripen, and the wildflowers are plentiful everywhere you look.  This is yarrow – another good medicinal plant, rumored to help knock out a cold in 24 hours… though the book I have doesn’t say what part of the plant to use or how to prepare it.

After two days of exploring we were ready to head farther south along the east side of Baranof Island, but the wind had other ideas.  The forecast on NOAA weather radio is often for 15 knots of wind and 3′ seas.  They’re forecasting for fairly large areas with significant mountain ranges that tend to funnel the wind, as well as big tidal currents that create nasty stacked waves when the tide is running hard against the wind.  Sometimes that forecast ends up giving us a frisky ride, and sometimes the water is a mill pond… though everything is subject to change fairly quickly.  That morning, the forecast was an understatement of the conditions so we decided to head back to the anchorage and wait for another day or two.  There’s just no reason to get beat up for hours.

As we settled back in our spot we were rewarded with a brown bear sow and her two second-year cubs foraging on the beach for about half an hour.  They were too far away to photograph well, but binoculars gave us a fine view.  Bear cubs are born in late winter – February-March, and the cubs stay with the mother until they are about 3 years old.  The second-year cubs would have been born in the late winter of 2015.

Shortly after the bears wandered back into the forest, an eagle landed at the water’s edge to investigate something uncovered by the falling tide… trying to take off with it.  That eagle was one of the pair sitting on a nest overlooking the anchorage. 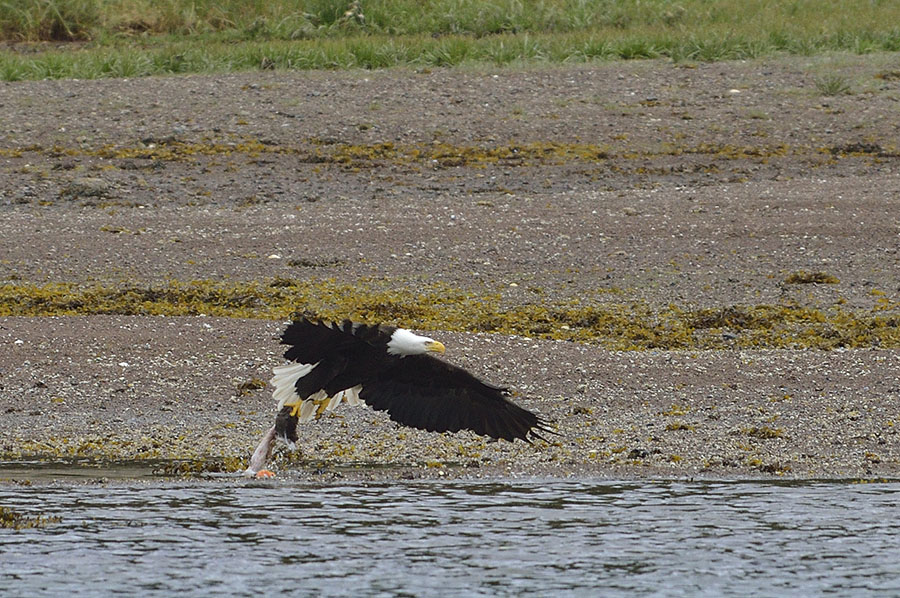 It didn’t take more than a moment before the Interesting Thing attracted several other eagles, prompting some tussles and a lot of screeching from the eagle still sitting on the nest. 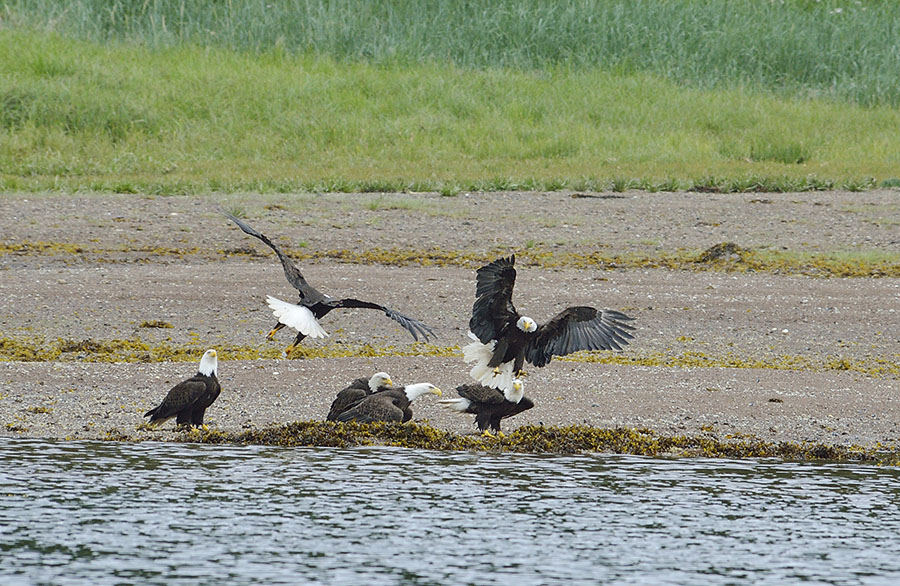 At one point there were 9 eagles around the Interesting Thing – 8 adults and one juvenile.  One “alpha” eagle spread its wings around the Thing to try and keep others away while it ate, though eventually more fights ensued and various eagles tried to fly off with it.  In the end, the nesting eagle won the prize and took it back to the nest.  As soon as the eagles flew away, a hummingbird buzzed by to look at me sitting in the cockpit – a wildlife bonanza reward for turning back!

We could hear whales blowing on the far shore of Freshwater Bay, and at dinnertime a whale was breaching repeatedly – the huge splashes were impossible to miss.

2 thoughts on “Eagles and Bears in Pavlov Harbor”