The 1973 oil crisis and resulting high prices made exploration of the Prudhoe Bay oil fields in Alaska’s far north feasible.  Finding plentiful oil, the Alyeska corporation constructed an 800 mile pipeline 48 inches in diameter to carry the crude oil from the shores of the Arctic Ocean’s Beaufort Sea south to the town of Valdez on Prince William Sound.  The pipeline was completed in 1977, and has been pumping oil ever since. 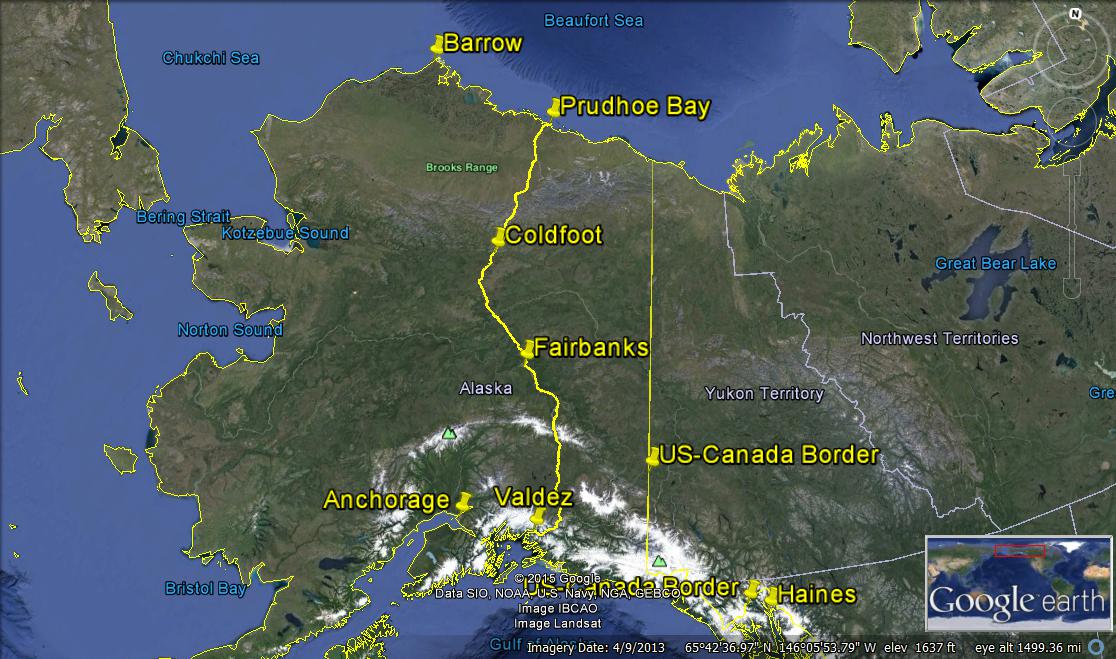 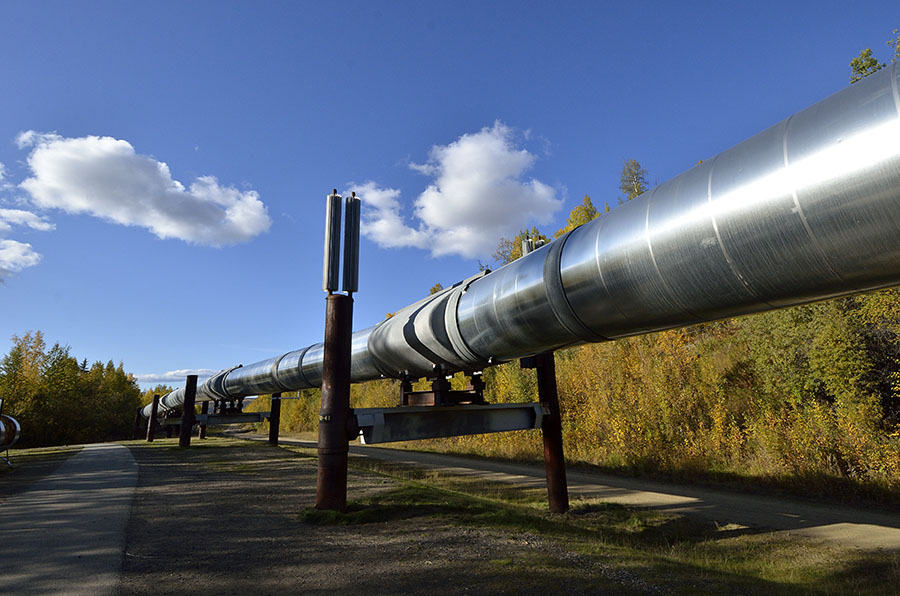 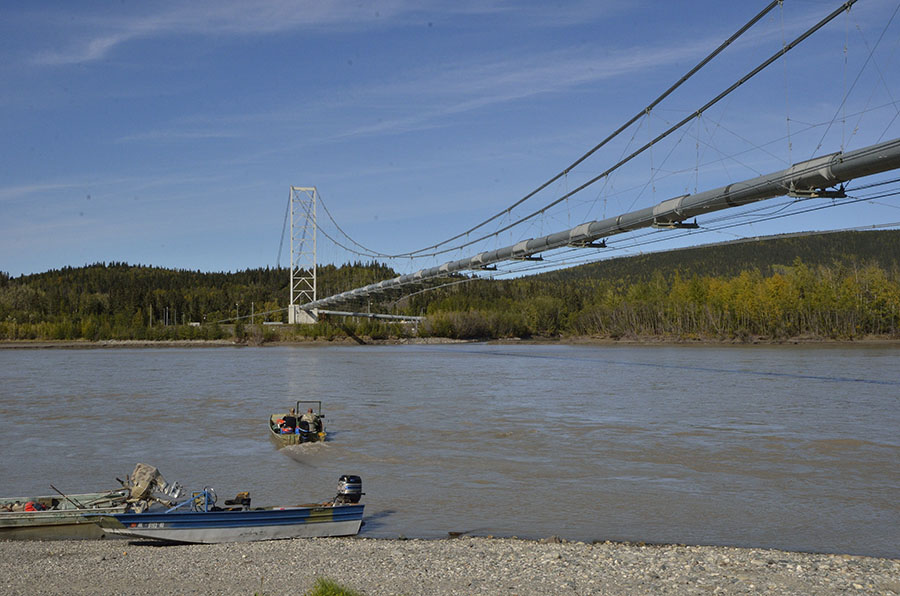 …and it crosses three major mountain ranges (Brooks, Alaska, and Chugach).  Constructing a pipeline through very rugged and remote country that can withstand earthquakes and temperature extremes is an amazing feat of engineering.

Since oil is such a critical part of the Alaskan economy we wanted to learn more about Prudhoe Bay, and we also wanted to see the Far North region and some of the animals that inhabit the tundra above the Arctic Circle.  Friends strongly advised us not to try to drive up the Dalton Highway ourselves – it’s a rough haul-road that is almost exclusively used by large tractor trailers.  We signed up for a tour – the last one of the season, departing on September 8th, where we would fly up to Prudhoe Bay, stay overnight and get to stick our toes in the Arctic Ocean, then ride in a tour van for the two day trip down the Dalton Highway back to Fairbanks.  An adventure! 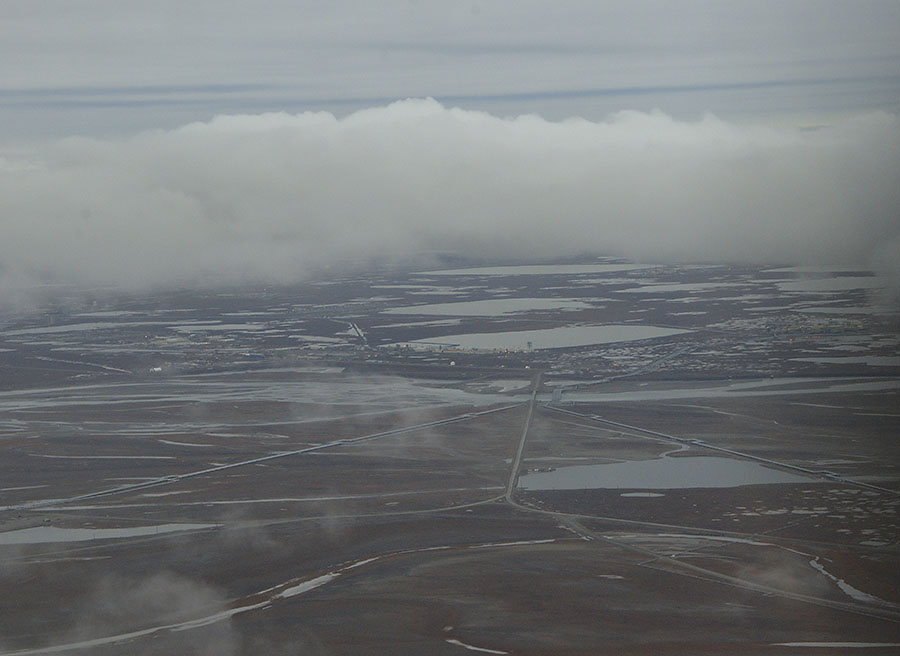 The photo above shows the tundra and typical overcast, gloomy weather over the town of Deadhorse, just outside of the secure fence around Prudhoe Bay. 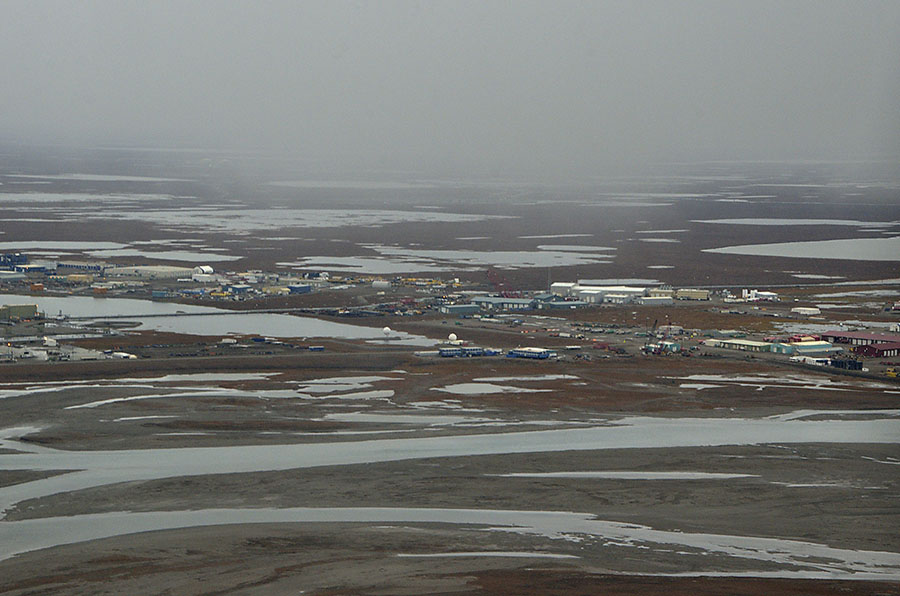 As far as I know, no horses were harmed in the construction of the Dalton Highway – the name came from one of the early subcontractors working on the road who abandoned one of their trucks with the company name “Deadhorse” on its side at the northern end of the road – and the name stuck.  The only reason to come to Deadhorse and Prudhoe is to work at the oilfields, and it’s a pretty grim place with absolutely NOTHING within hundreds of miles.  Oil workers usually work two weeks on and two weeks off, but the support staff often works 6 month contracts.  No alcohol is permitted, and that rule is strictly enforced. 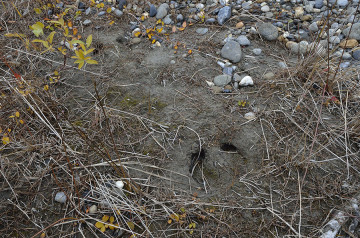 In contrast to the bleak landscape, birds and animals are varied and interesting.  Herds of musk-oxen wander nearby, as well as caribou.  We didn’t get to see any since it was hunting season and many of the animals were hiding, though a large herd wandered right by our hotel a week earlier.  The tundra was in transition from fall to winter, with a few small plants still showing some color, providing camouflage for a little snow bunting. 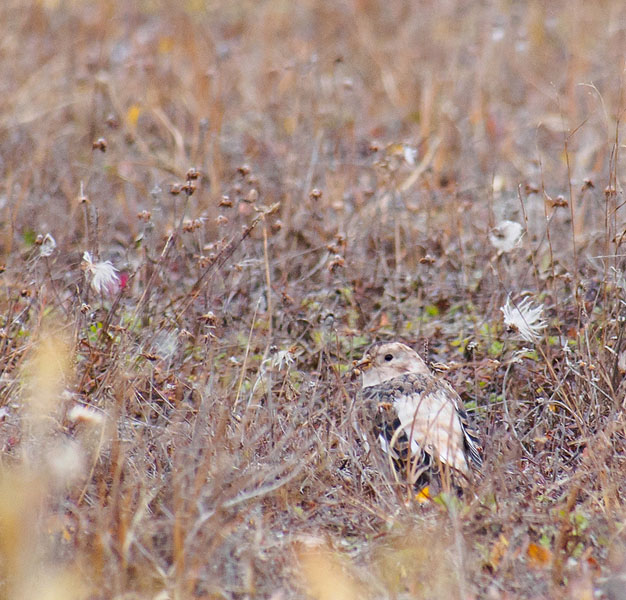 We spotted a short-eared owl hunting, as well as this red fox.  Both arctic and red fox live on the tundra, though the larger red fox are becoming more dominant in the landscape. 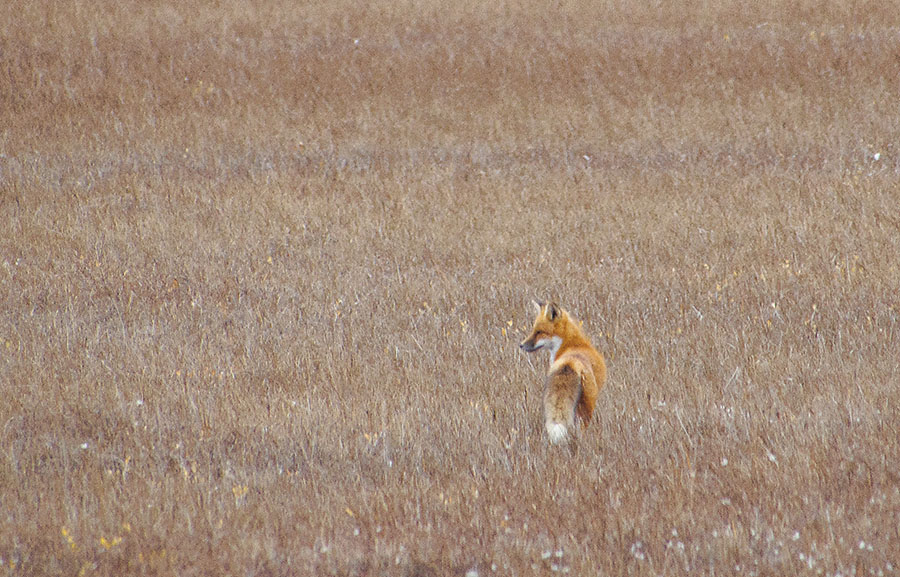 Plovers, gulls, ducks, and tundra swans were fishing in the tundra ponds and in the Arctic Ocean, where we went to stick our toes.  We were very glad to have a security guard escorting us to keep an eye out for polar bears.  Polar bears aren’t common this early in the fall (it was early September), but they are apex predators and they will hunt humans.  The guard had some interesting bear stories from his years working up there. 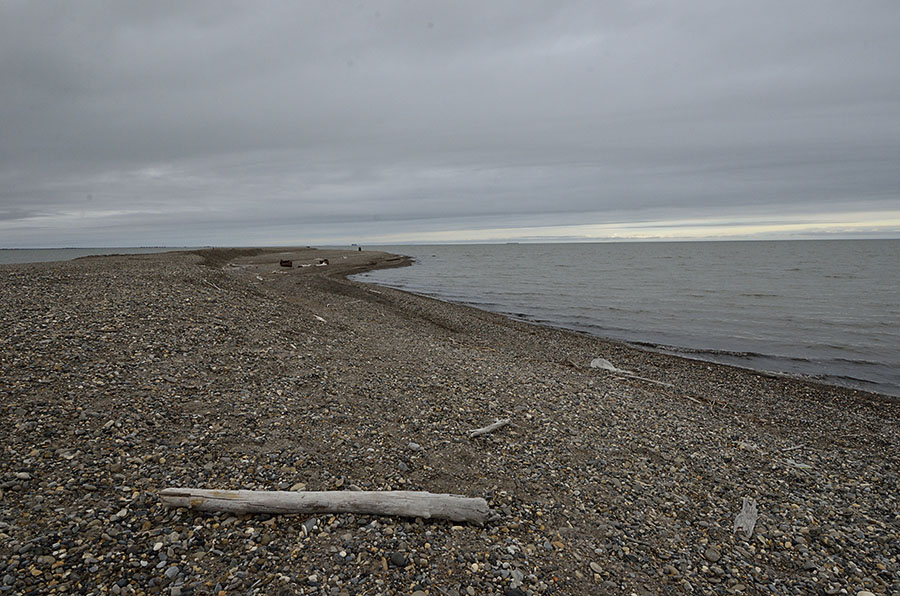 This is a bleak place, utterly industrial with nothing but flat tundra and gravel pads with modular buildings (note in this photo the buildings are up on stilts to protect the permafrost).

Most of the oil exploration is done in the winter, when the tundra is frozen hard and covered in snow to protect the plants.  Long strings of modular offices and living spaces are connected together to make “trains” that are towed across the frozen land to various locations for exploration, and the crews live and work there for extended periods. 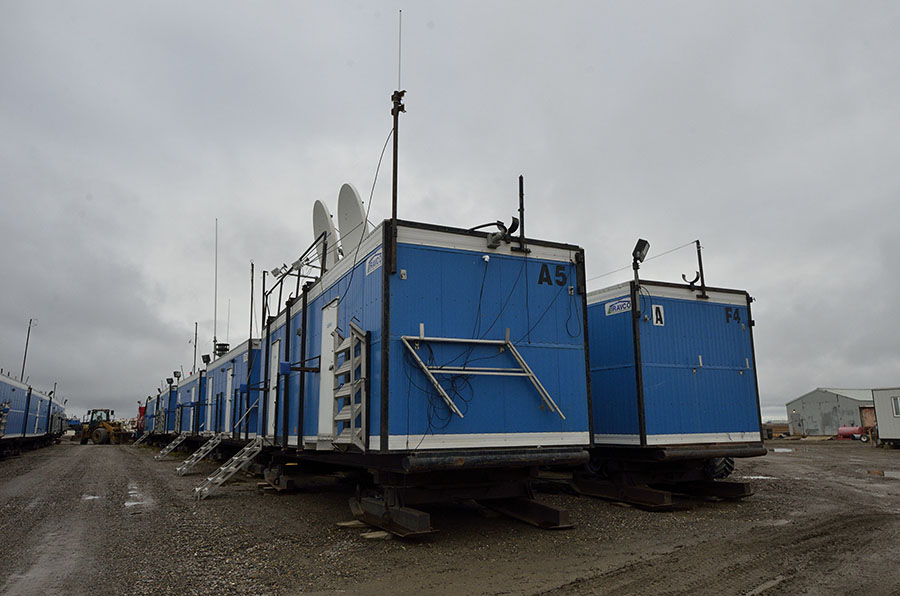 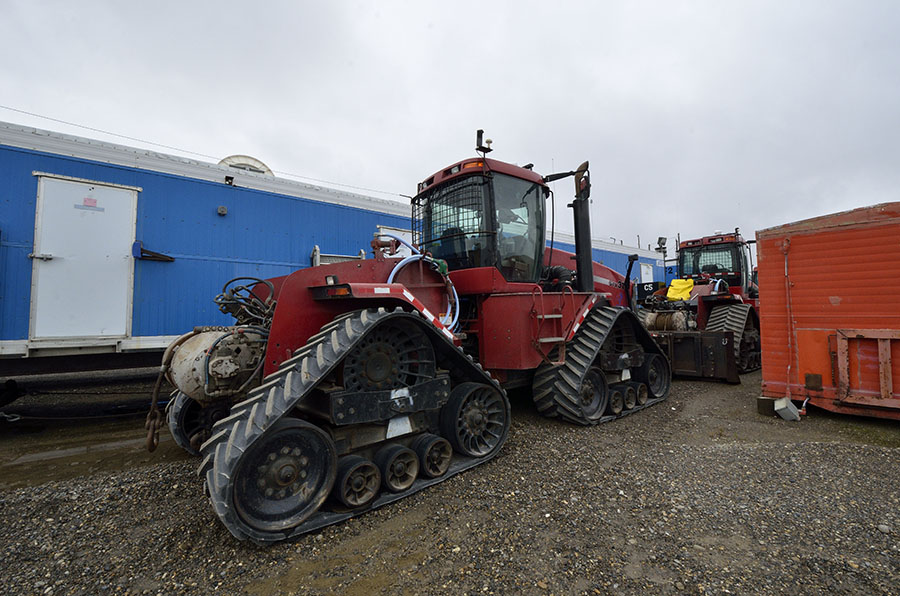 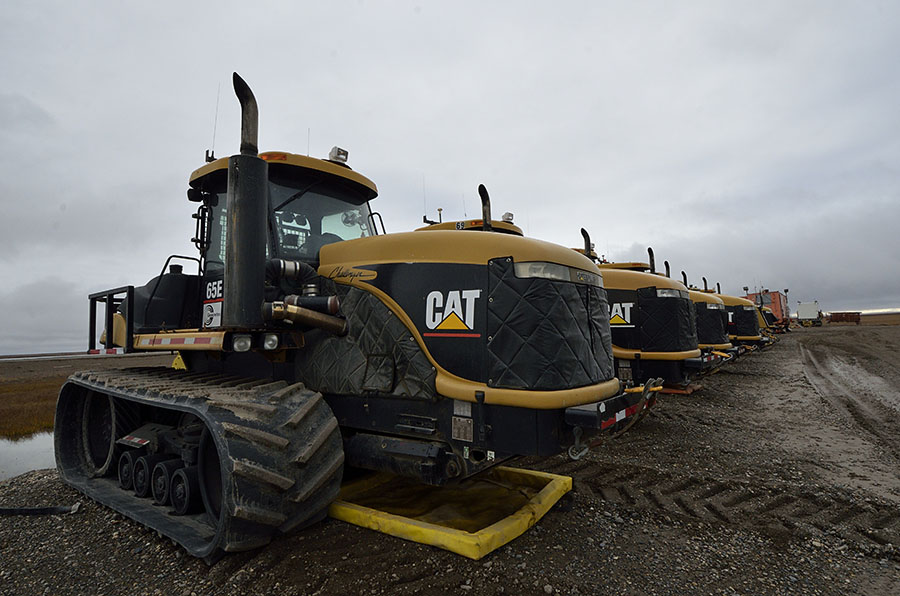 Aside from oil workers and support staff, only a handful of tourists (like us) and hunters come up to Deadhorse, and we get to pay about $200 a night for extremely spartan accommodations in Deadhorse Camp. 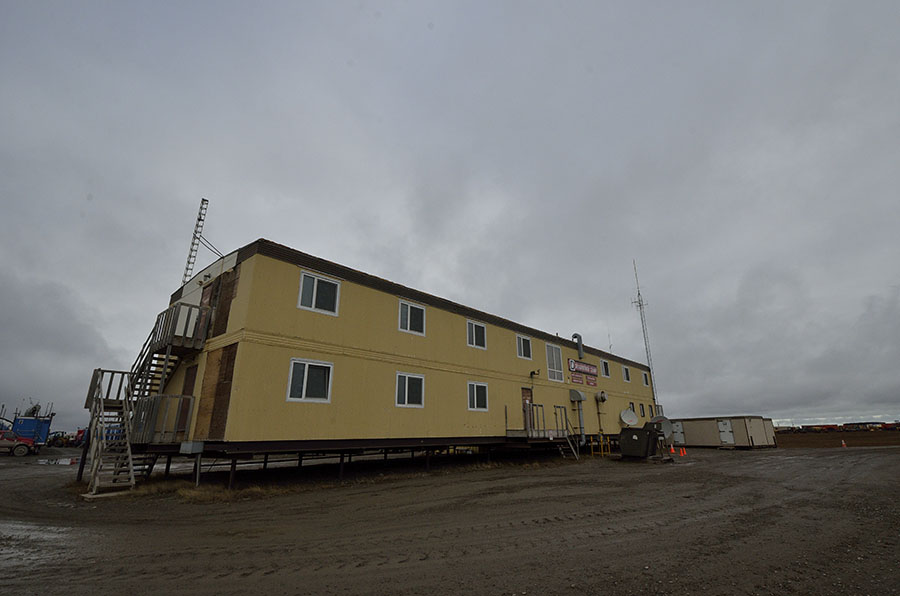 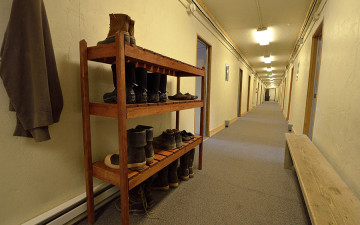 It’s a muddy, messy place, so you have to either remove your boots in the lobby or wear heavy shoe covers to keep the floors clean.  This is a very basic bunkhouse with shared bathrooms at the end of the hall.  There are no amenities in your room, and you have to be courteous since some people staying there were working night shifts.  Food was expensive and basic, but very good.  I could not imagine living and working here, but I have the utmost respect for people who do.

Prudhoe Bay supports about 4000 workers, of which 15% are women.  In the busier winter season the population swells to about 7000.  Potable water costs 35 cents a gallon, and gasoline is about $6/gallon.  There is one main general store – hardware downstairs and snacks and a few necessities upstairs. 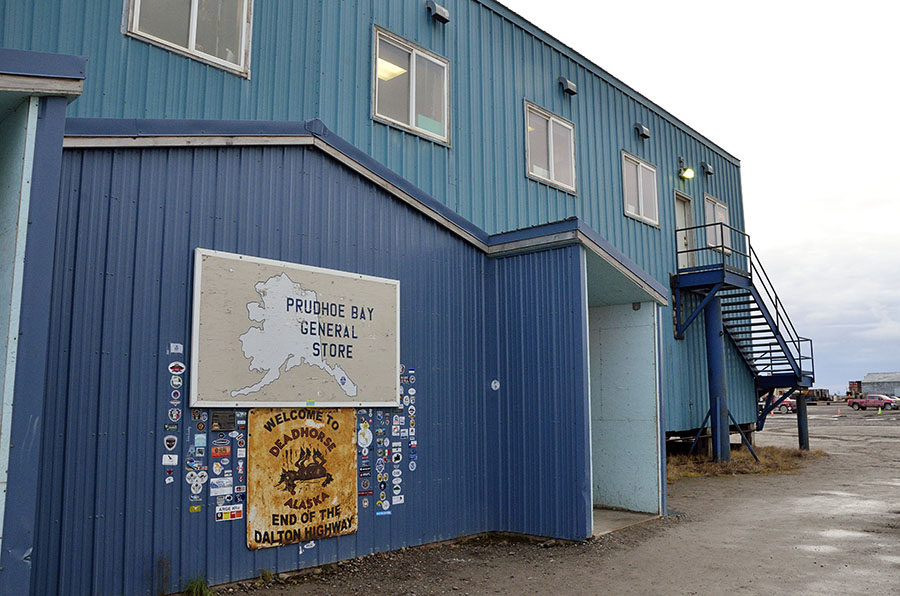 Are we glad that we spent the time and money to travel up to Prudhoe Bay, to see it and to see the Arctic Ocean?  You bet!  We learned a ton of things – our tour guide was very experienced and full of knowledge, and our fellow tour members were all educated, interesting and interested people.  Seeing amazing wildlife was well worth the trip, though we were disappointed about not seeing musk-oxen or caribou.

Next up – the drive down the Dalton Highway from Prudhoe Bay back to Fairbanks.

1 thought on “The Pipeline and Prudhoe Bay”