We’re back from traveling and now I have the chance to catch up on photos and posts – and the final leg of our boat cruising season is next up.  The last post was about Ketchikan and some of the native culture, and this post will be about the 2.3 million acres of the Misty Fiords National Monument, a short distance away. 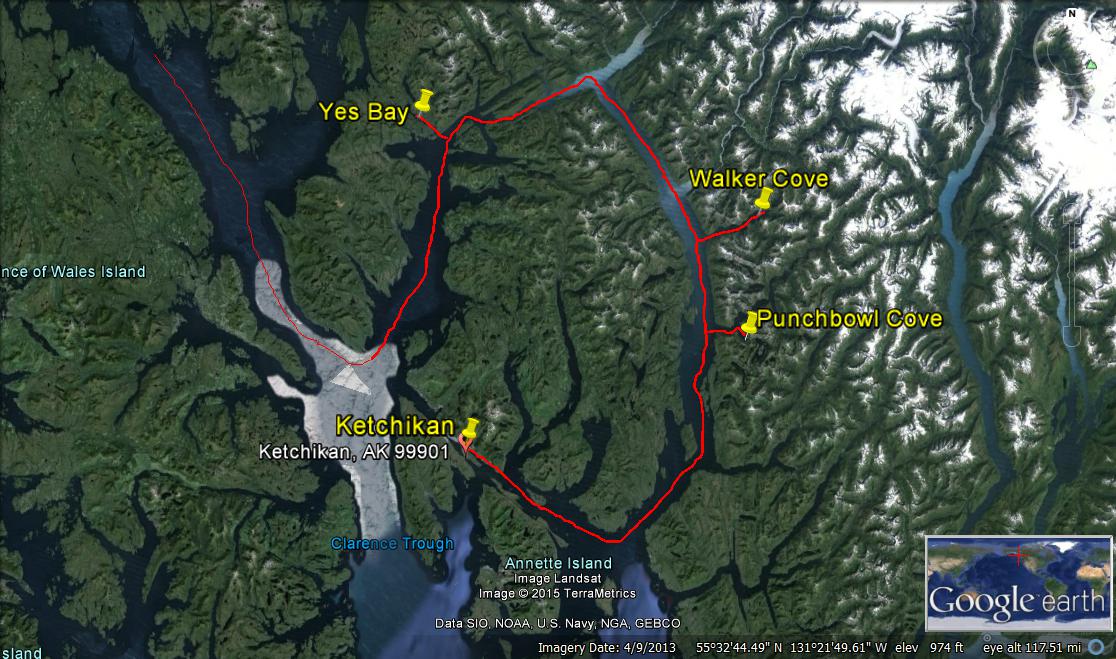 Misty Fiords is located on Behm Canal, which separates Revillagigedo Island (where Ketchikan is) from the mainland.  It consists of 50 million year old granite that has been carved and shaped by glaciers, with mountains 2000-3000 feet tall that plunge vertically into the sea, which is 1000 feet deep.  It is a very beautiful and magical place, and we wanted to see it by air as well as by boat.  Before friends Bill and Mary flew home, we all hopped aboard Island Wings’ deHavilland Beaver floatplane for an aerial view. 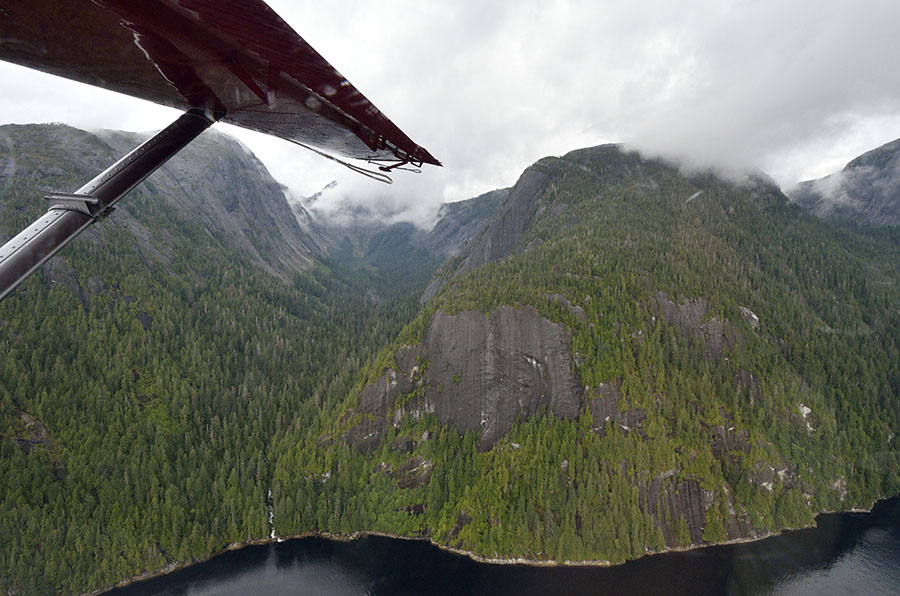 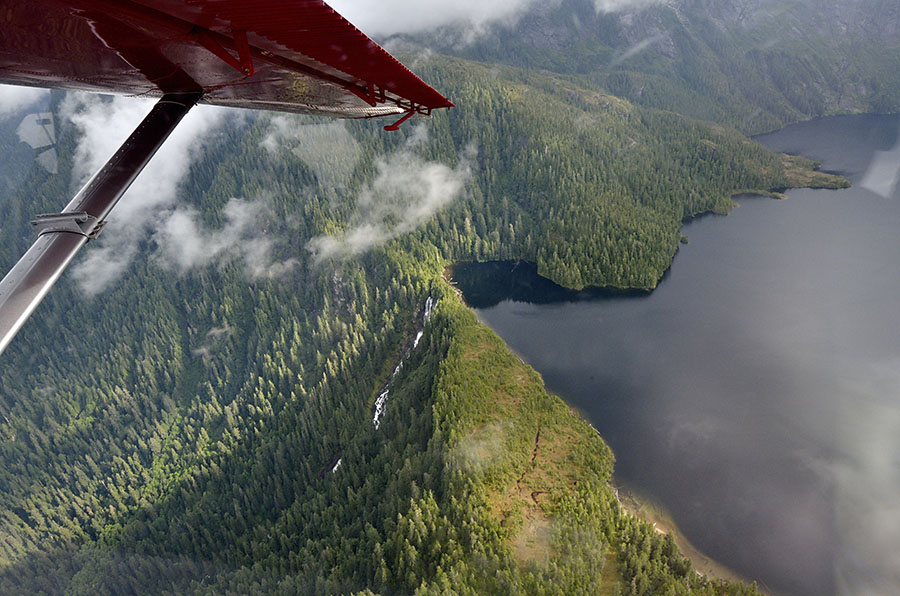 There are thousands of mountain lakes high up among the peaks, often draining down the sheer walls in dramatic waterfalls.  We made a landing on one of the mountain lakes, and the call of a loon was the only sound we heard.  Stunning. 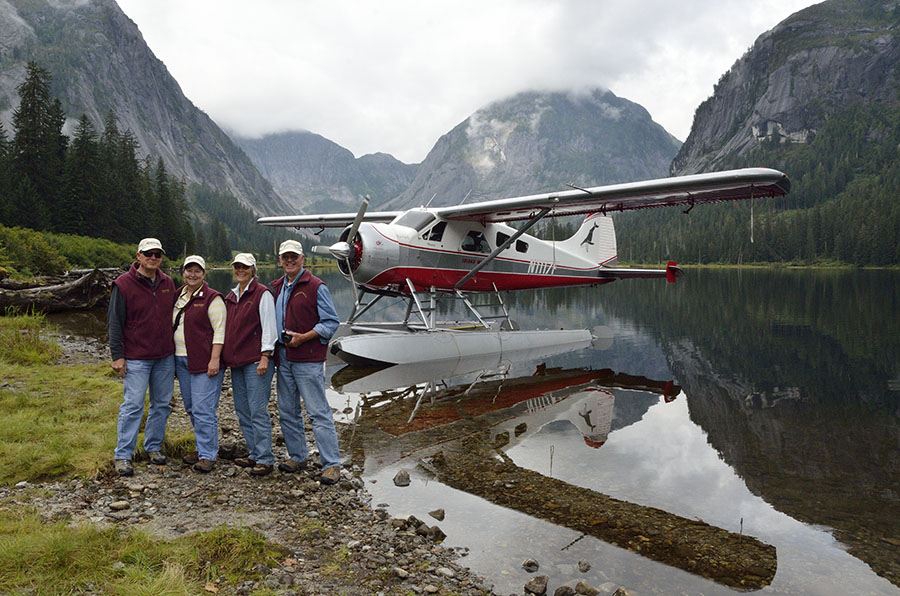 No matter how long the flightseeing trip is, it’s never long enough.  Heading back towards Ketchikan we spotted a purse seiner fishing for salmon… 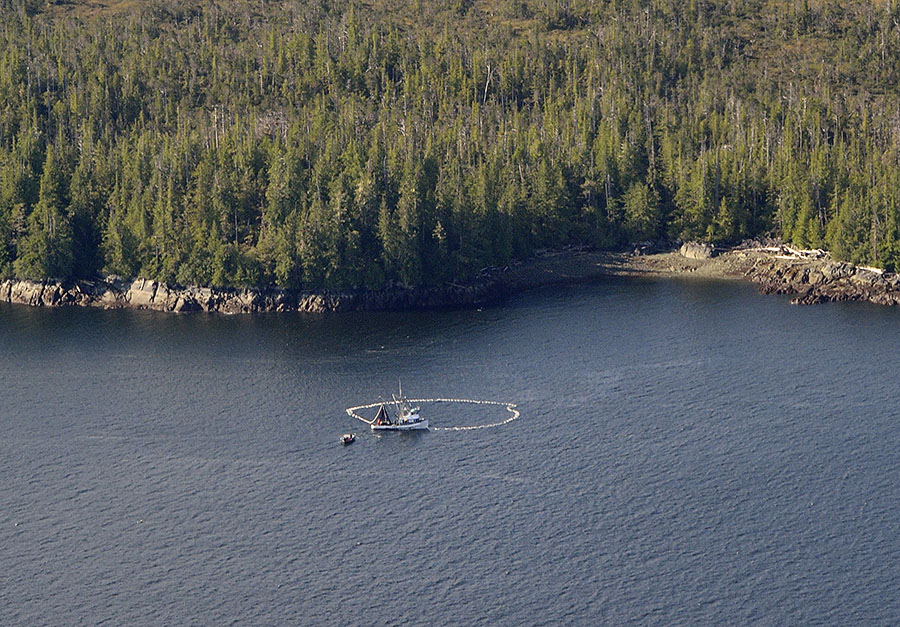 …and as we approached Ketchikan we had a great view looking north up the Tongass Narrows, with town on the right, the airport on the left, and a few cruise ships still in port. 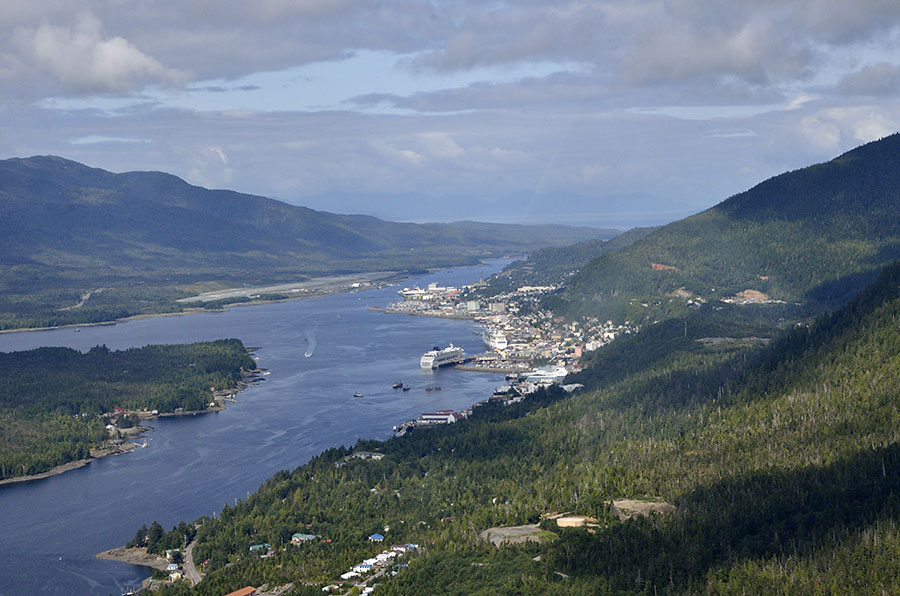 The only way to experience this remote wilderness is by boat or by float plane, and we intended to do both, despite the fact that the sheer rock faces and very deep water makes anchoring a daunting prospect.  We didn’t have as much time as we would have liked, but any time spent in the Fiords Monument is worth it.  We cruised south from Ketchikan to get to the bottom of Behm Canal, and turned up into the fjord system.  Our first highlight was seeing the tall spire of New Eddystone Rock – 237′ of basalt pillar left behind from a volcanic vent.  This land was shaped by fire as well as ice. 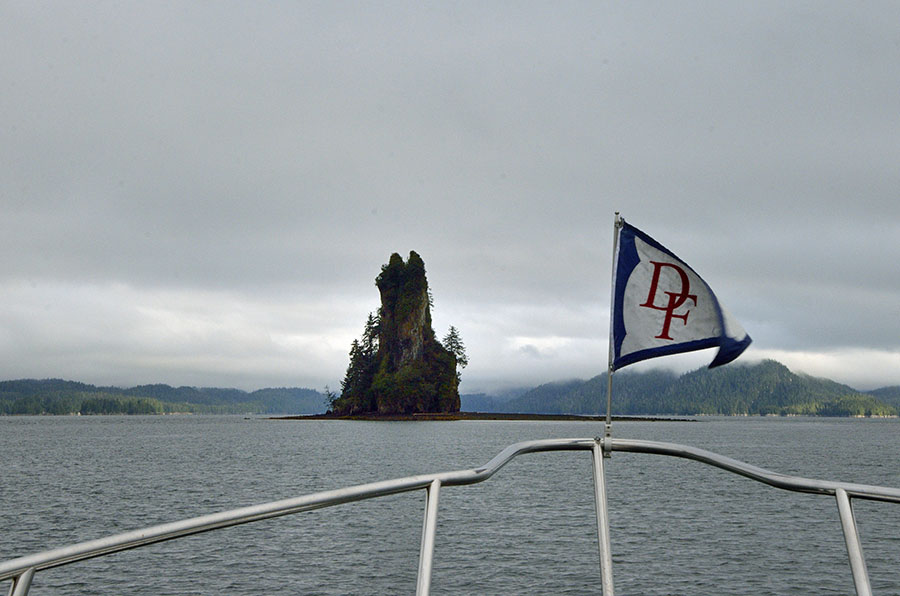 The rock doesn’t look that big when you’re heading towards it, but when you look with binoculars you notice the little specks on the beach that are seals, and you realize that you’ve been approaching it for a long time and it still looks so far away.  This is what it looks like from the air, and it’s odd to find this tower and shallows around it in such deep water.  It’s one of the few accessible places for seals to haul out and rest in the area. 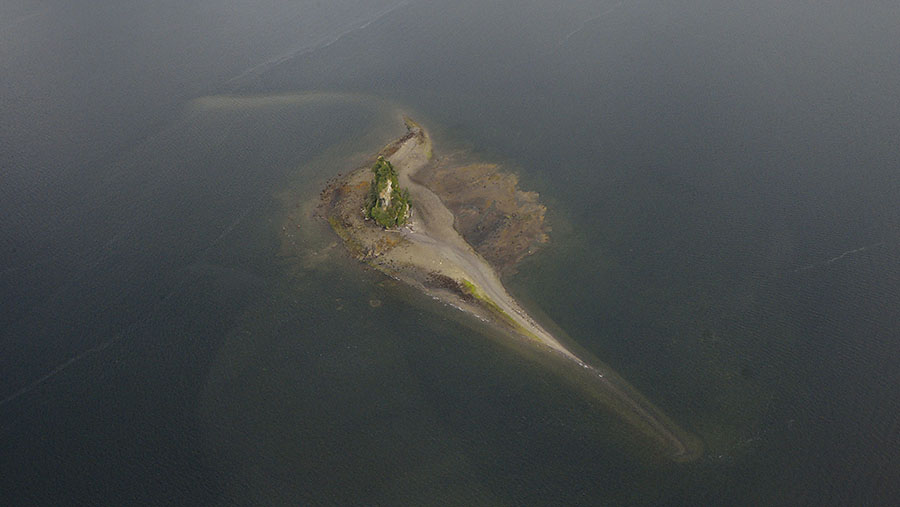 Turning east past the spire we entered Punchbowl Cove – gorgeous.  Clouds hung below the mountaintops, and we just slowed down to savor the view.  If we had more time we would have stayed there for a few days on the single Forest Service mooring ball – the hike up to Punchbowl Lake has legendary views.  Next time. 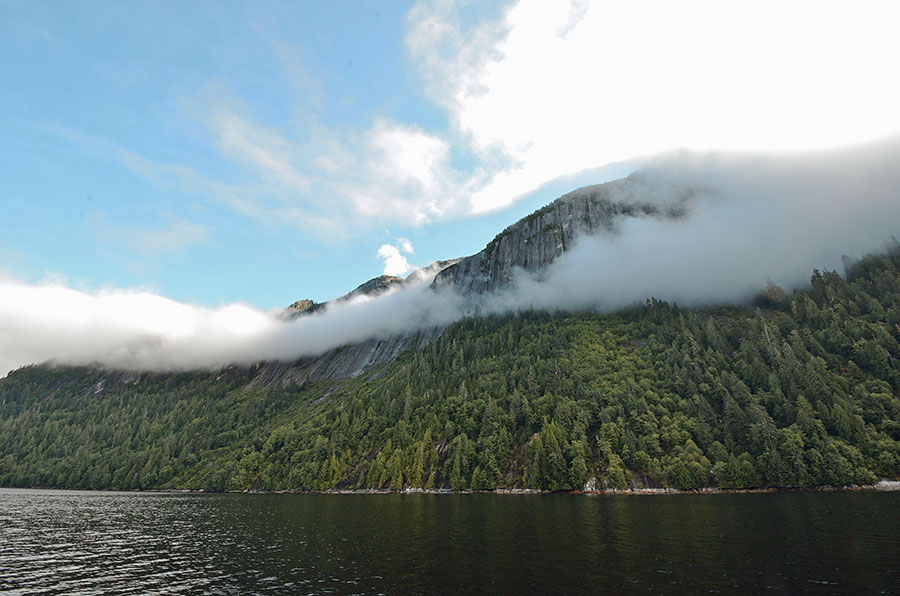 Next we headed into Walker Cove, a particularly pretty area with waterfalls of every shape and size.  We were able to anchor just off a small meadow, watching a bear prowl the shoreline.  It’s a place where you can feel very very small.  Can you spot the three boats in this photo?  There are two DeFever 49s and a sailboat. 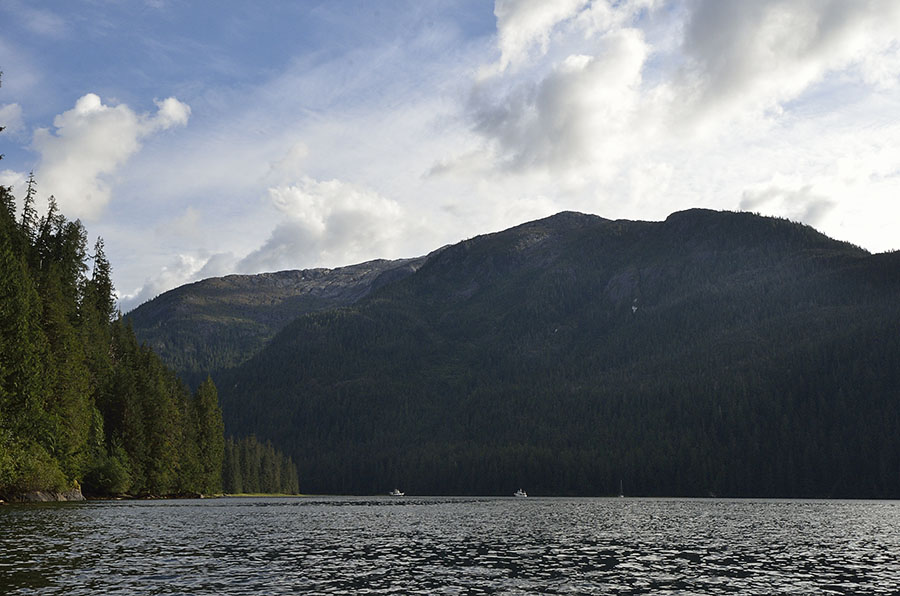 I spent hours paddling around the cove, investigating as many of the waterfalls as I could find… these are just a few of them. 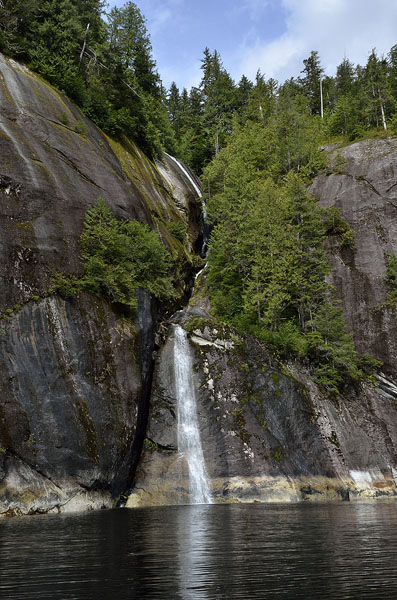 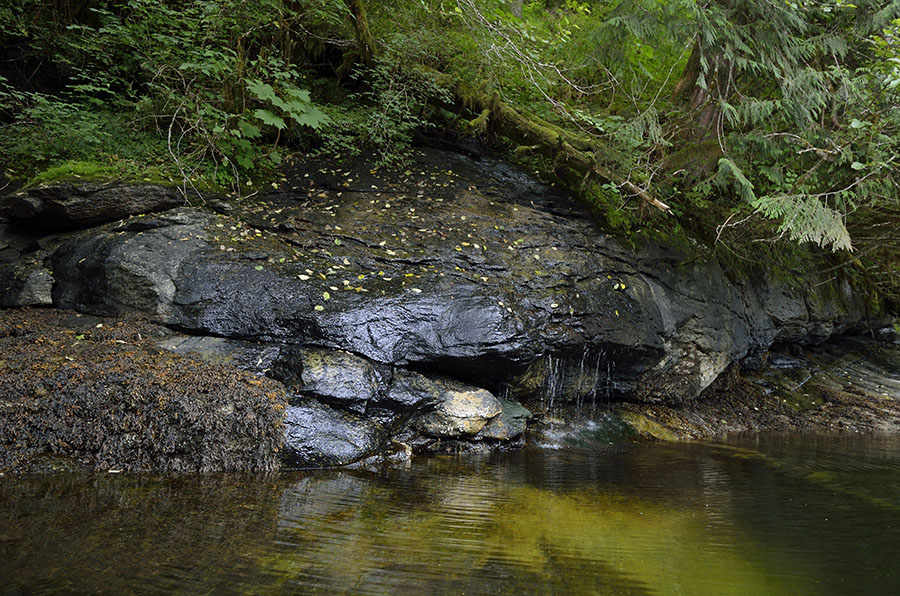 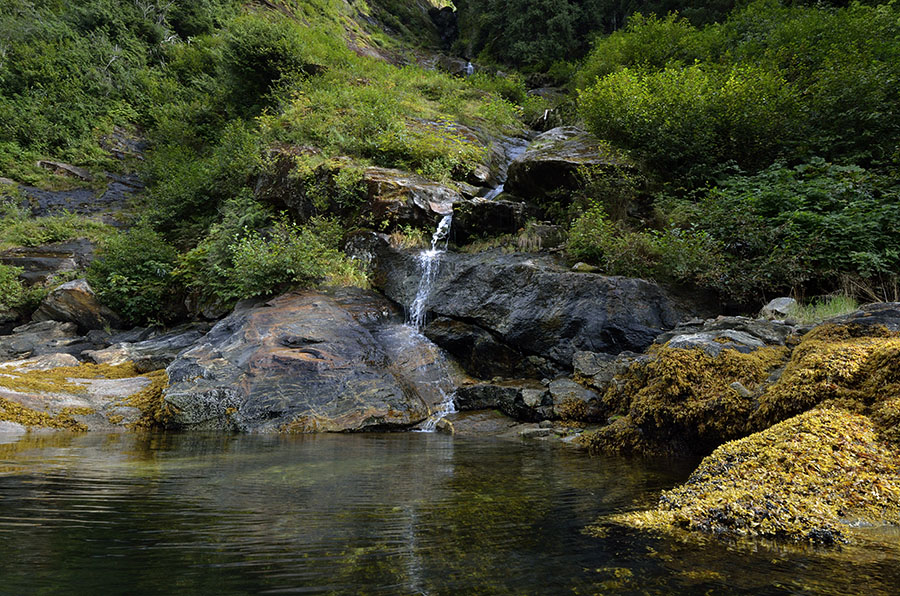 We really had to cut our exploration of the Fiords short, and we were sad to leave after just a couple of days, but we’ll definitely return.  As we headed out for the last day the weather turned gloomy and the monument really lived up to its name. 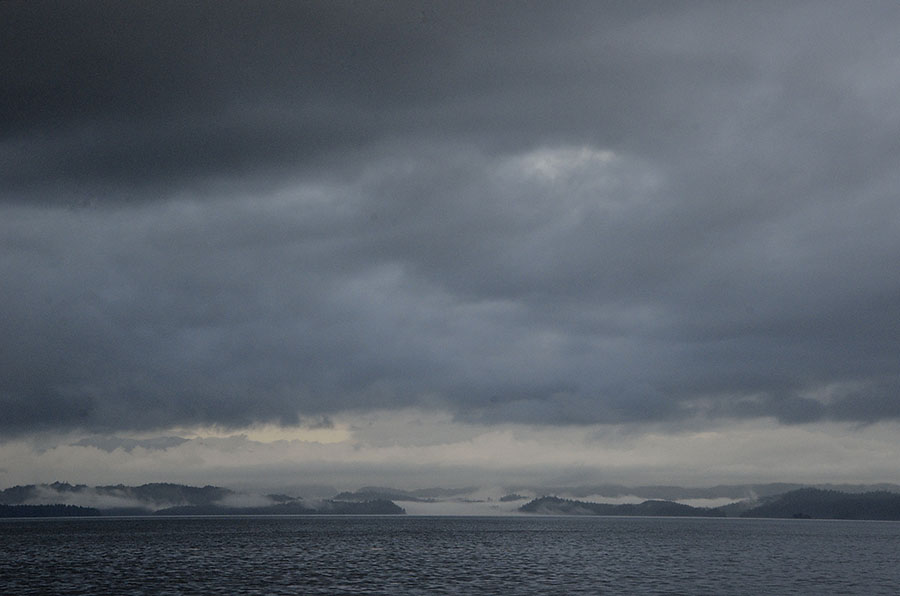 Our hurry to return to Petersburg had a good reason – another kind of adventure – a road trip to the Alaskan Interior.  On the way home we were treated to humpbacks, orcas, sea lions, seals, eagles, sea otters… and a rainbow.  Not a bad way to wrap up a boating season.