We’re back in Petersburg after our big road trip to the Alaskan Interior, and I’ll get you caught up with all those blog entries later on.  In the meantime, I thought I’d show you a slice of life back here in the harbor in early October – a rainy time in the rainforest.

October is the start of dungeness crab season, and the crews were busy re-configuring their fishing boats from salmon gear to crabbing gear.  Even on a miserable wet day the boats were lined up at the crane dock to load pots… 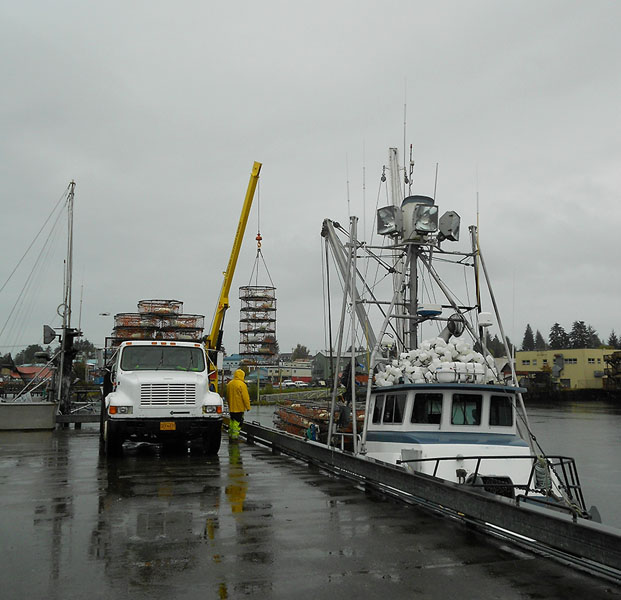 …and the HAAKON was riding a little low in the water with so many pots! 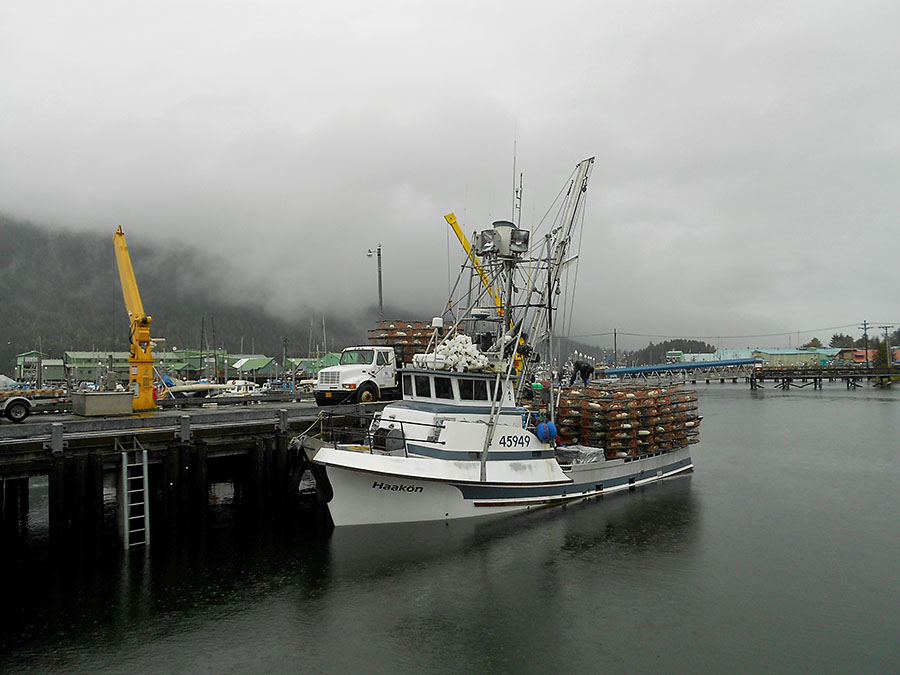 A lot of the fishing fleet chose not to go crabbing, so many of the bigger boats were back in their stalls, resting from the busy summer salmon and halibut season.

We got a nice week-long break from the rain so we headed Out The Road to enjoy a picnic lunch with friends on a crisp fall day.  The prospect of clear nights sent us to our computers to check the forecast for the aurora borealis, and activity for the week was predicted to be pretty good.  Friends called us one evening to say that the “lights are on!”, so we grabbed cameras and drove up to Hungry Point – the corner of land where Wrangell Narrows meets Frederick Sound.  It’s nice and dark there, and the mountains make for a beautiful silhouette.  Luckily the aurora activity started quite early – around 10pm.  It’s usually best seen around 1am-2am, and that means either staying up really late or setting the alarm and climbing out of a nice warm bed to go and see if the aurora is active.  We usually can’t see much from the dock here – there are too many bright lights, but a short drive or walk can get us to places where we can see what’s going on in the night sky.  No matter what it takes, or how cold it is, it’s really worth the effort to get to see the aurora! 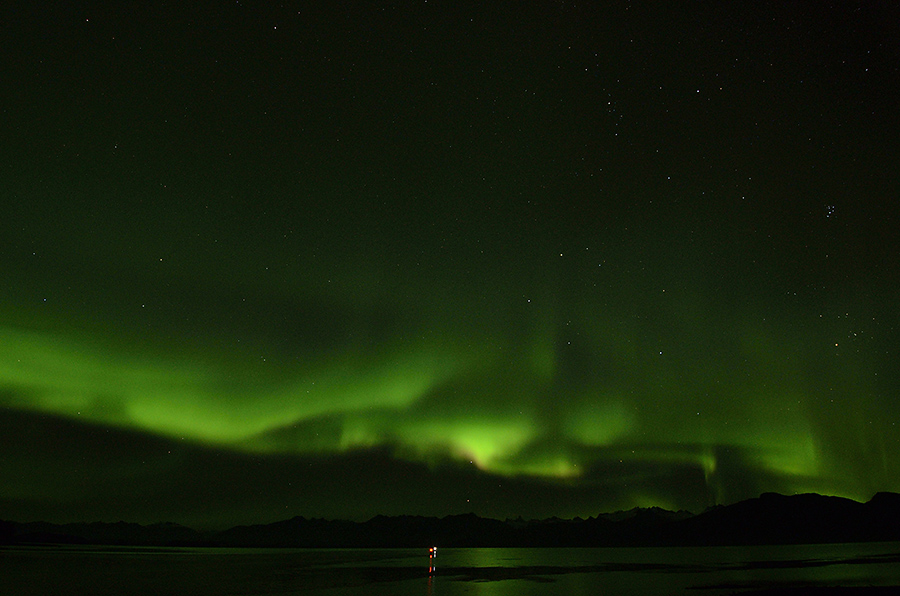 The aurora reflecting on the water was really pretty, and we were serenaded by the groans of the Steller sea lions that like to lay on the two lighted buoys in the foreground.  What was so very interesting is that when the aurora got particularly active and bright for about 5 minutes, the sea lions also got much more vocal.

The aurora goes on much of the time, but we rarely get to see it down here in Southeast Alaska because our winter nights are so often overcast, and the aurora activity doesn’t always swing as far south as we are.  Green is the most common color to see, but red and purple and white can occur too.  In the photo above you can see some red on the bottom of some swirls.  The aurora can come and go through the night, with just a pale green glow that can brighten and start dancing and undulating, sometimes forming curtains that gently sway or swirls or bands of color.  Just watching it move and shift is magical.  Sleepiness and cold are quickly forgotten when the skies put on their show! 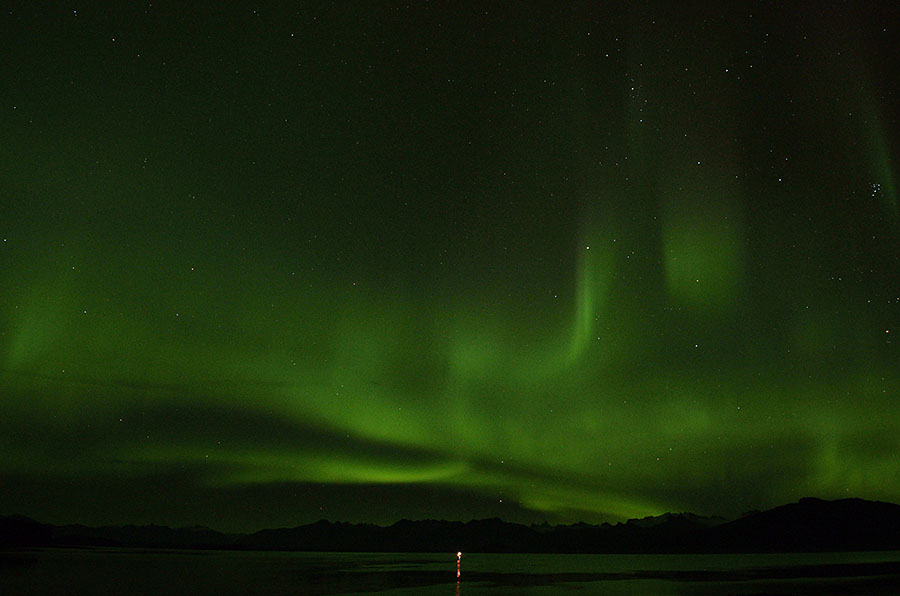 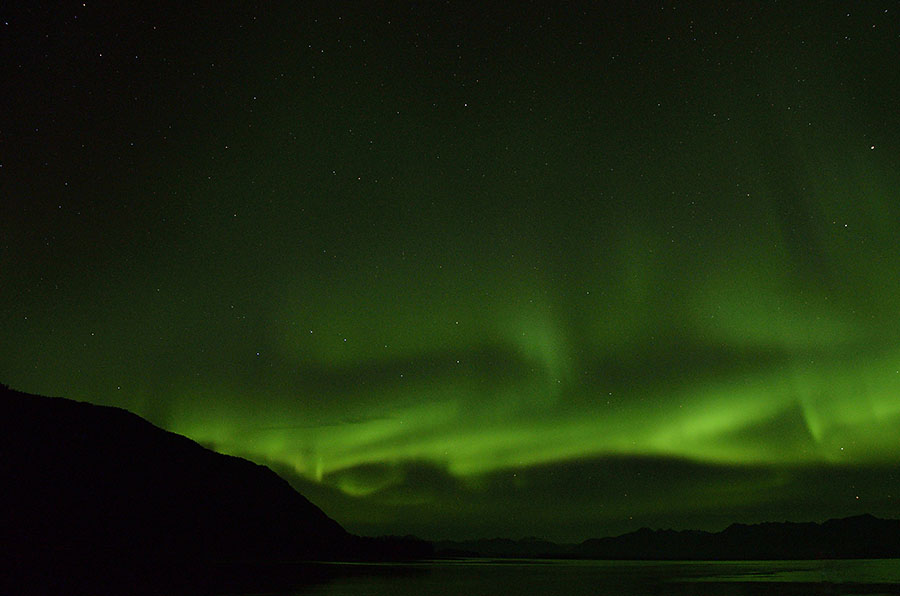 We spent a few days walking around like zombies from lack of sleep, and although we were sad to see the cloudy-rainy weather return at least it meant that we could get some rest.  We had a lot of things to do to get ready for winter, and one thing on the list was to get in the 48 degree water and replace a few zincs on the boat.  We have good dry suits and warm gloves to handle the water temperature, but the job was made a little more interesting because of the Steller sea lions.  “A Toyota truck with fins and teeth” is how one diver describes them. 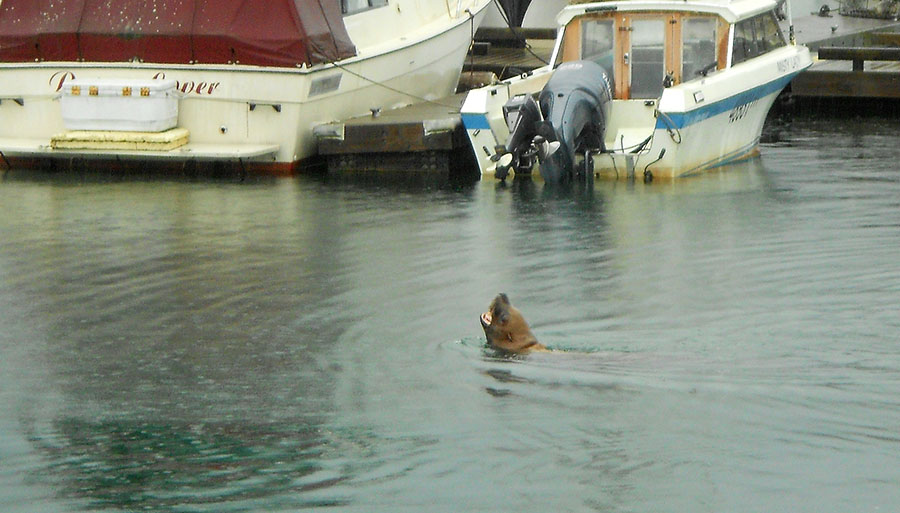 They can cause problems and harass divers, and I’d rather not experience harassment from a 2000 lb. animal.  Normally we only see them in the harbor now and then, but they hang around the canneries and fishing boats in the busy summer season.  The canneries have quieted down, but the big sea lions are still around the boats quite often.  The zincs needed changing, so we decided that one of us would go in the water and the other would serve as a lookout.  Guess who won the job to get wet? 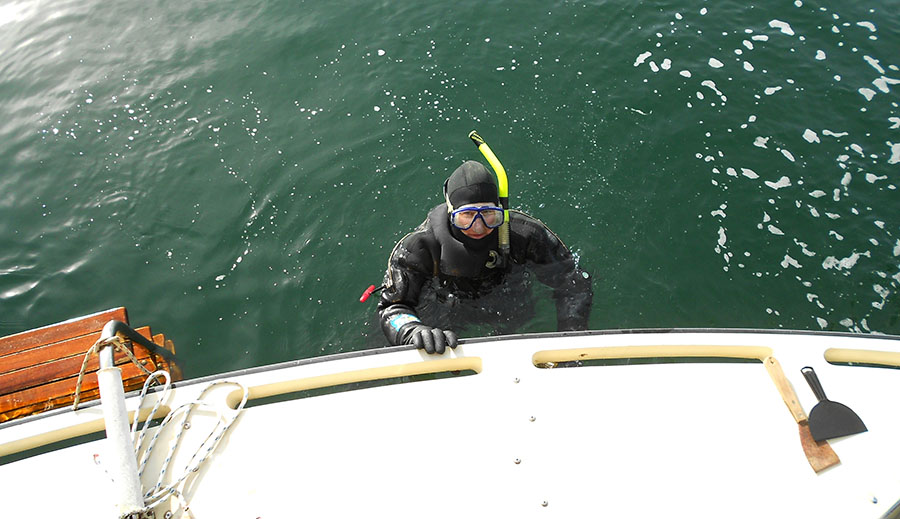 I was just getting started on one of the zincs, trying not to drop the wrench or the nuts when Jim pounded on the swim ladder to get my attention.  I popped up and quickly climbed up the ladder as far as I could in the bulky suit… with my feet still hanging in the water.  Fortunately the sea lion didn’t pay any attention to us, and as soon as he left the area I slid back in the water to finish the job as quickly as I could.  I had one more Steller alert in the middle of the job, but once again he ignored us and eventually swam away.  Nothing like a little excitement to make you forget the chilly water! 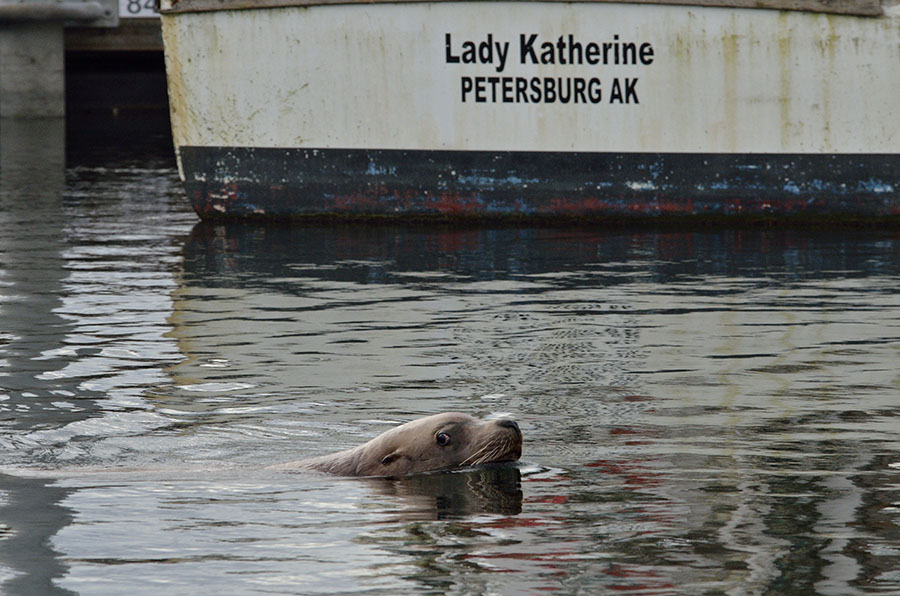