This is the first installment of tales from our September “road trip” to the Alaskan Interior.  Over the course of three and a half weeks we drove 2500 miles and covered another 2000+ miles on ferries, airplanes, and a tour van.  Here’s a picture of our entire route – Alaska is a very big place!  (Yellow indicates road, blue indicates airplane, and red indicates ferries.) 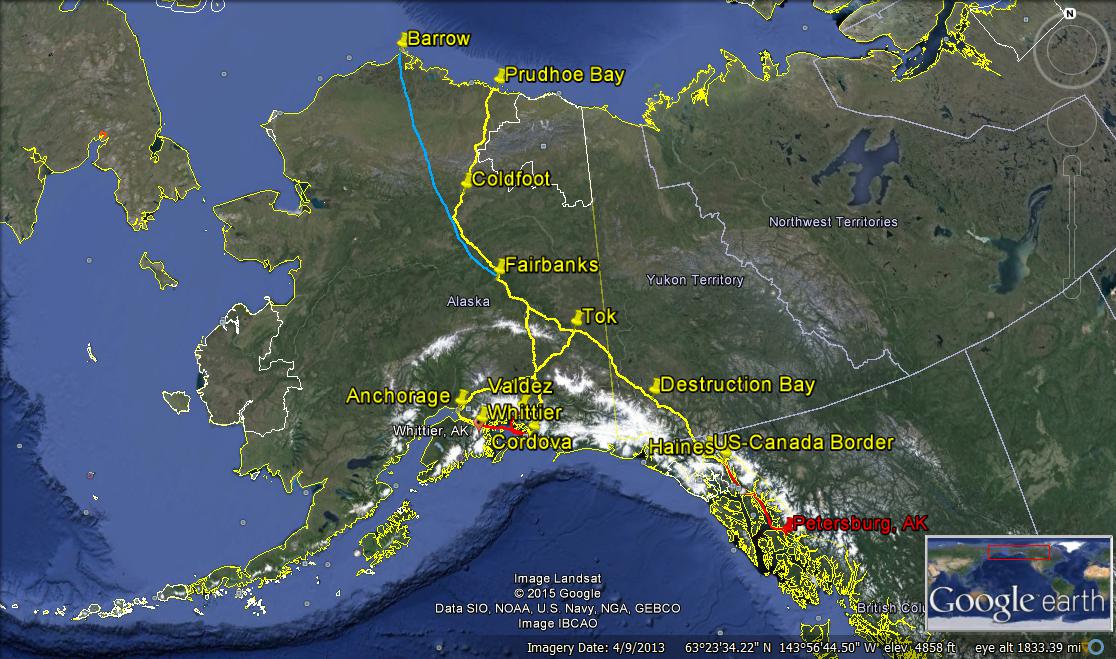 I put “road trip” in quotes since we live on an island that’s not connected to anything, so to get our car to a road that actually goes somewhere requires a boat ride first… on the Alaska Marine Highway, (aka the ferry). 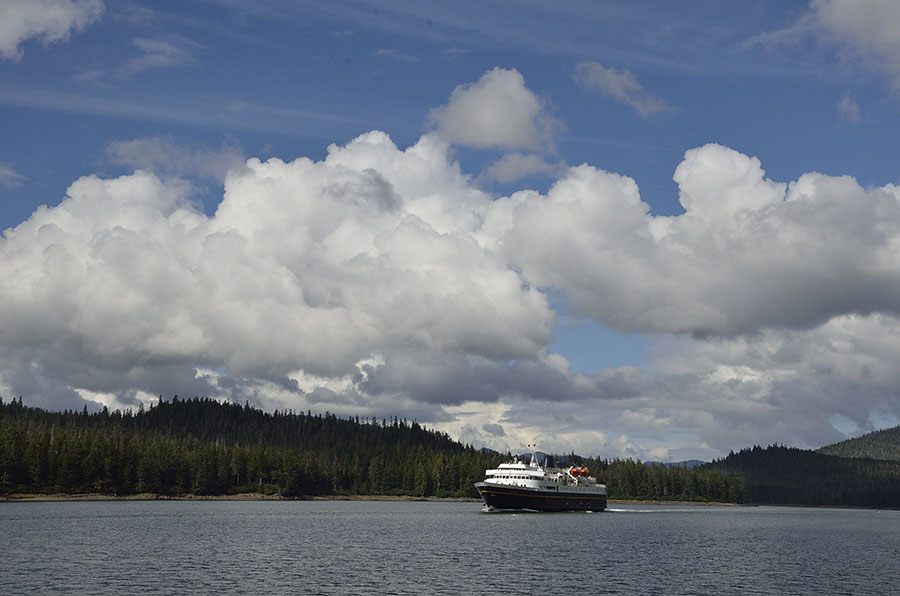 The ferries that serve Petersburg are 418 feet long, carry 600 passengers and up to 134 vehicles.  The Marine Highway is a vital service that connects the isolated communities in SE Alaska as well as Prince William Sound throughout the year, and it’s a popular way for summer tourists to get around and see more of the Inside Passage.

The ferries are moving most of the time, and they’re constrained by tides in a few places so the schedule varies from day to day.  You have to meet the ferry when it happens to stop in your town – which might be in the middle of the night.  The ferry only stops a few times a week in Petersburg, though we were lucky that our “road trip” start date coincided with a midnight arrival of the ferry COLUMBIA.

There are only two towns in all of SE Alaska with roads that actually go somewhere.  Juneau, Sitka, Petersburg, Ketchikan, Wrangell, Angoon, Gustavus, Hoonah and Kake are all land-locked, so we have to take the ferry to Haines or Skagway to get to the road system.  It’s interesting to note that Haines and Skagway are only 16 nautical miles apart, but they are 350 miles apart by road.  If you look at a map you can see that the Canadian border is very close to Haines, and that means we have to go through two provinces in Canada (British Columbia and Yukon Territory) to get to the main part of Alaska. 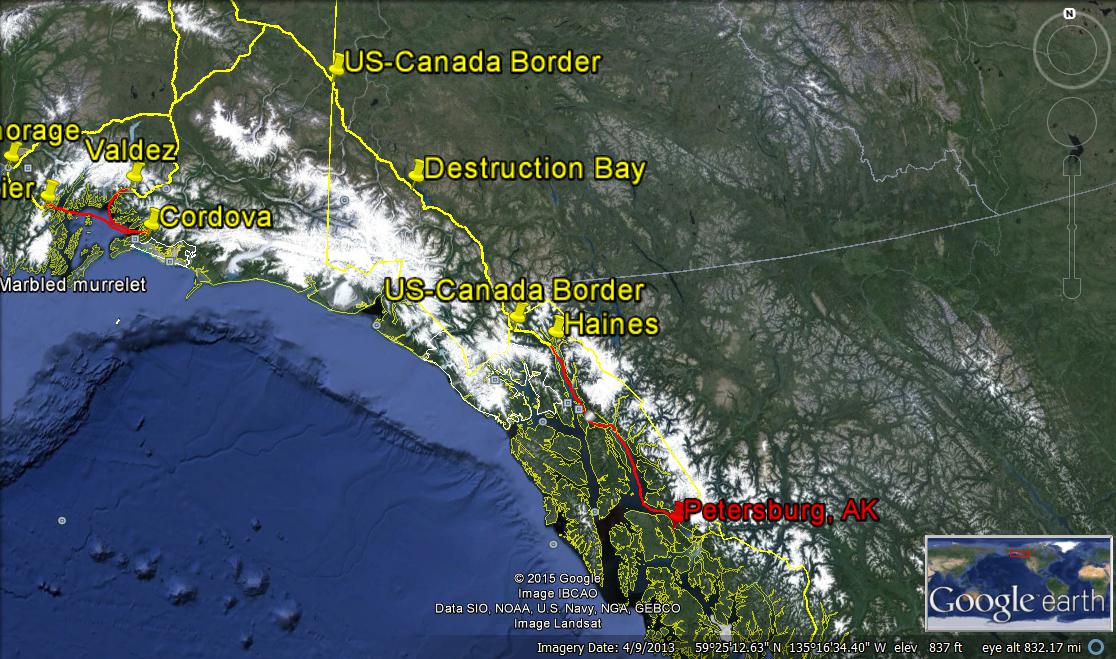 We arrived in Haines at a very reasonable 4pm, so we checked into a hotel and drove over to the Chilkoot River to look for bears munching on the last of the summer salmon run.  We saw some eagles and could smell plenty of dead salmon, but no bears this particular afternoon.  Haines is a beautiful place surrounded by tall mountains, but it gets much more snow and cold in the winter than Petersburg does. 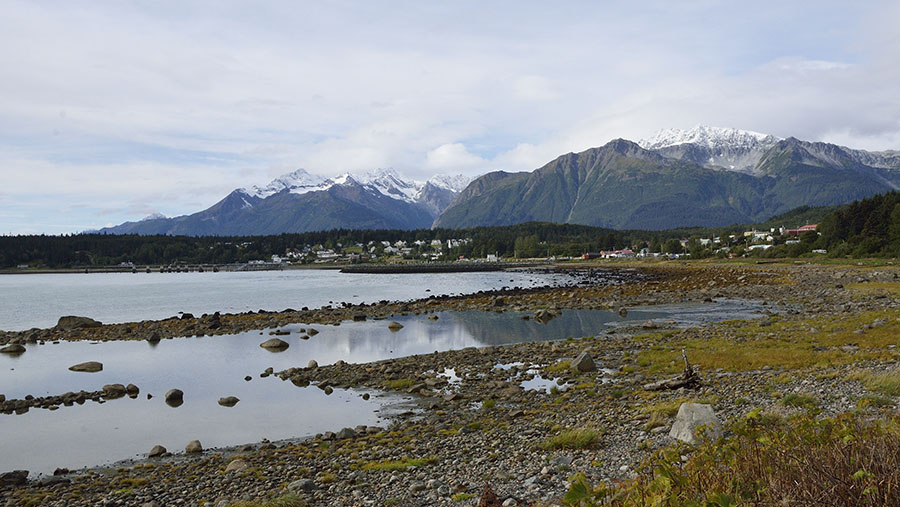 The next morning, September 1, we pointed the car north.  Along the Chilkat River, which plays host to the largest concentration of bald eagles through the winter (about 3000 birds), we spotted a native Alaskan fish wheel – a means of catching salmon that is only allowed in a few places since it’s such an effective mechanism and could lead to overfishing. 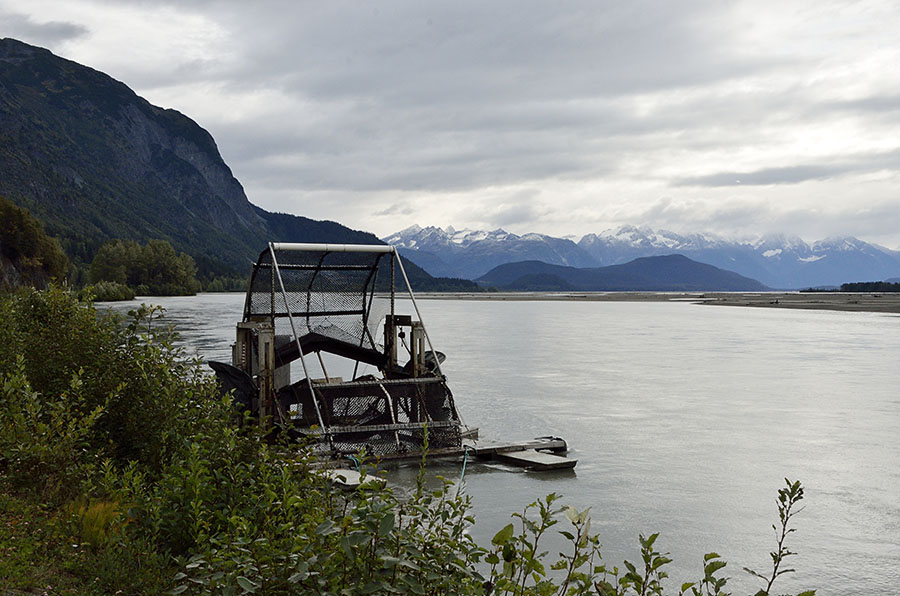 It’s only about 40 miles up to the Canadian Border, steadily climbing and gaining altitude as we drove.  The first leg in Canada is through British Columbia, and the fall color was just gorgeous!  All the deciduous trees are yellow, but the only red was from the fireweed on the roadside.  We miss the pretty reds and oranges we remember from the east coast. 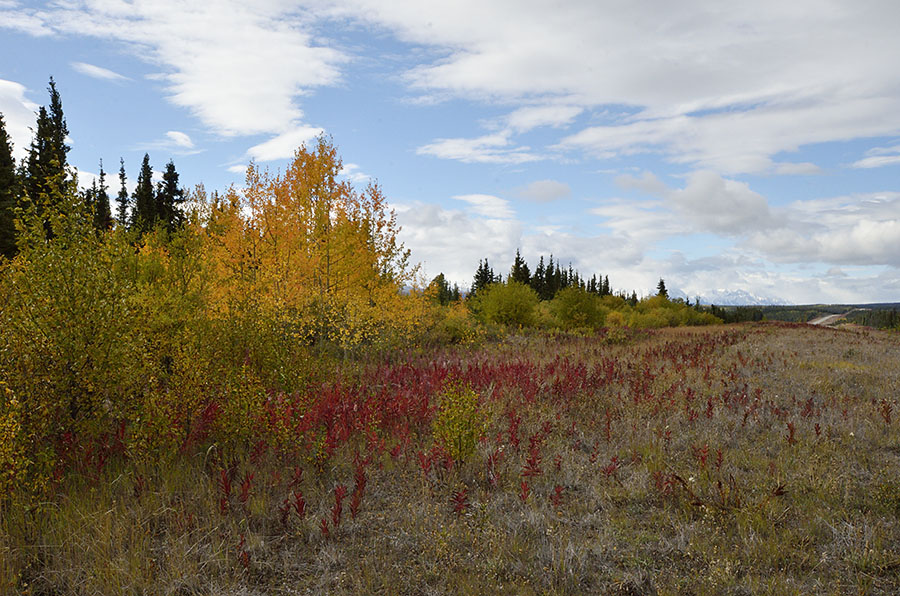 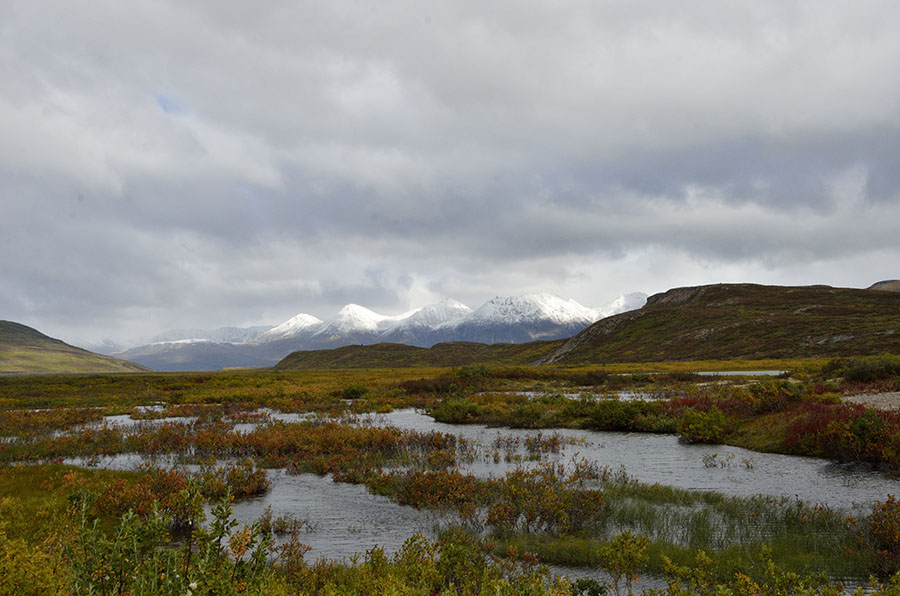 As we climbed the mountains were showing snow about 1000′ higher than we were.  We turned right at the Canadian town of Haines Junction onto the Alaska Highway – also known by its older name, the Alcan Highway.

In February 1942, shortly after the bombing of Pearl Harbor, President Roosevelt ordered the construction of an Alaska-Canada (Alcan) military highway to allow for transportation of military materiel and personnel to the relatively unguarded “back door” to the United States.  American and Canadian troops built the road through rugged mountainous wilderness in only 8 months!  In 1946 the road was opened to civilian traffic.  My Father was in the Army in Alaska during the Korean War, and he and his buddies drove back to the Lower 48 on the Alcan.  I love that I was retracing some of my Dad’s steps. 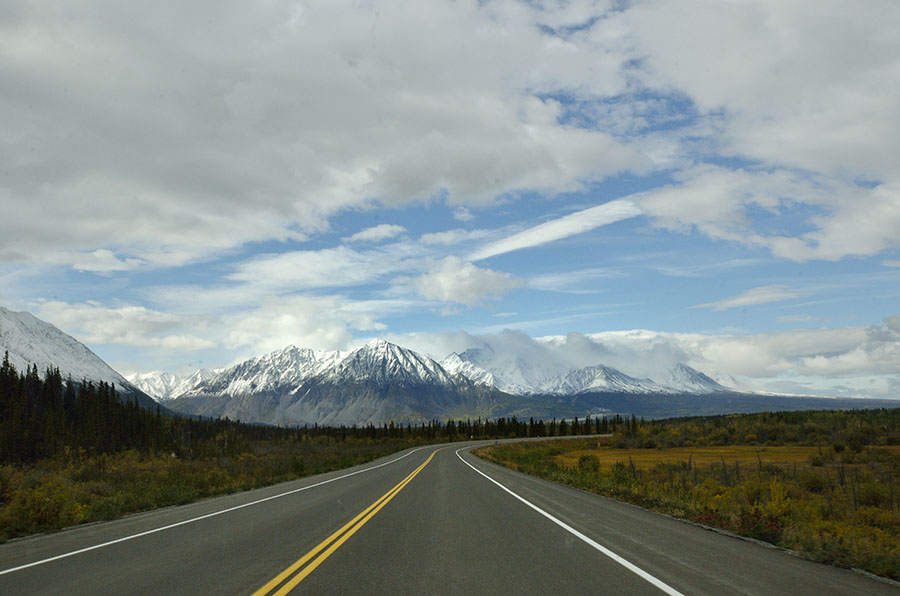 Jim was a great trooper and stopped for me to take photographs often.  The scenery was just so stunning at every turn, though the photographs don’t do justice to the beauty.  We stopped to take a photo at this meadow, and a black bear ran across the highway just as we were pulling over to the side.  We watched him run into the woods, and as we were admiring the view we spotted a grizzly bear at the far edge of the meadow. 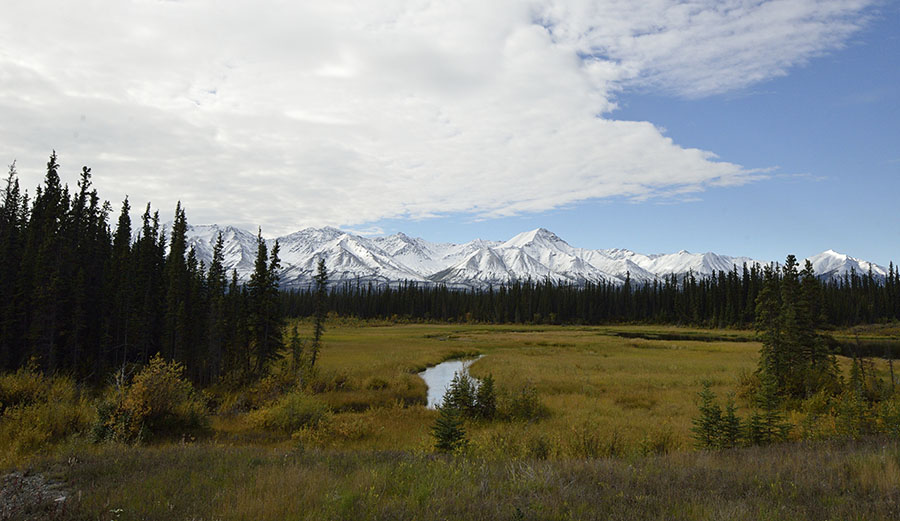 In general we didn’t see as much wildlife as we had hoped, but it was hunting season and the animals were hiding.  The road was paved in many places, though it can develop potholes and heaves so it’s constantly under repair.  Most stretches were through remote areas with a roadhouse every 100 miles or so.  We stopped in Destruction Bay, Yukon for the first night, located in Canada’s dramatic Kluane National Park.  Kluane abuts a provincial park in British Columbia on one side, and it abuts the U.S. Wrangell-St. Elias National Park on the west side, creating the single largest protected land mass in the world.  And we got to drive through parts of it. 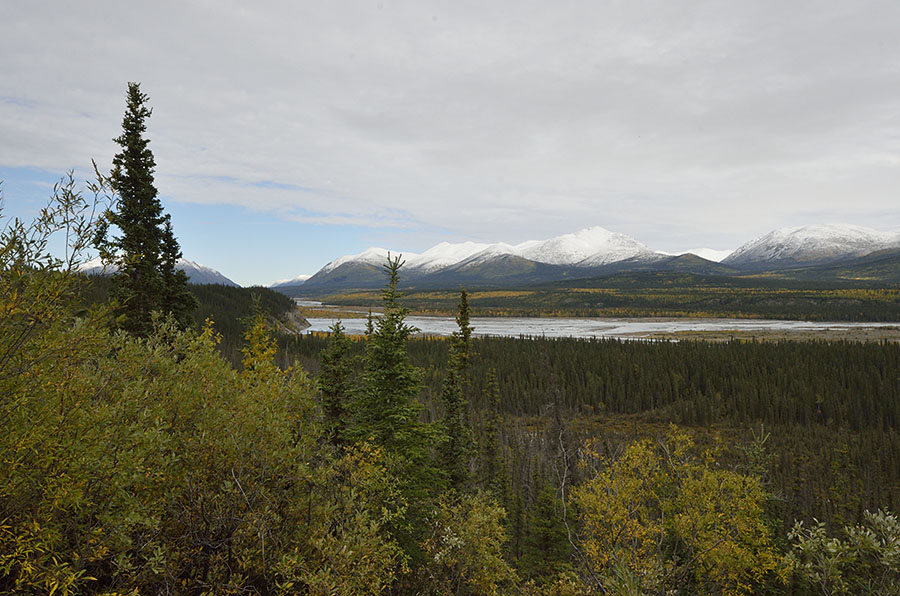 We’re still learning lots about life in the north country, and we learned that just because something is called a “highway” does not mean that it’s paved.  Travel on the Alcan requires attention, periodic slow travel, and a sense of adventure. 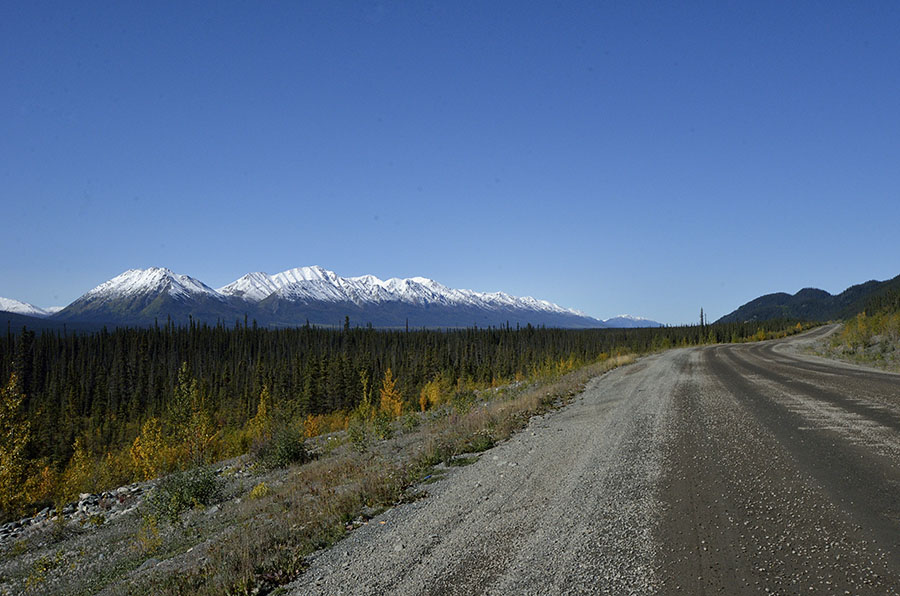 We finally made it to the Canada-Alaska border on the west side, the entry to the main part of the state. 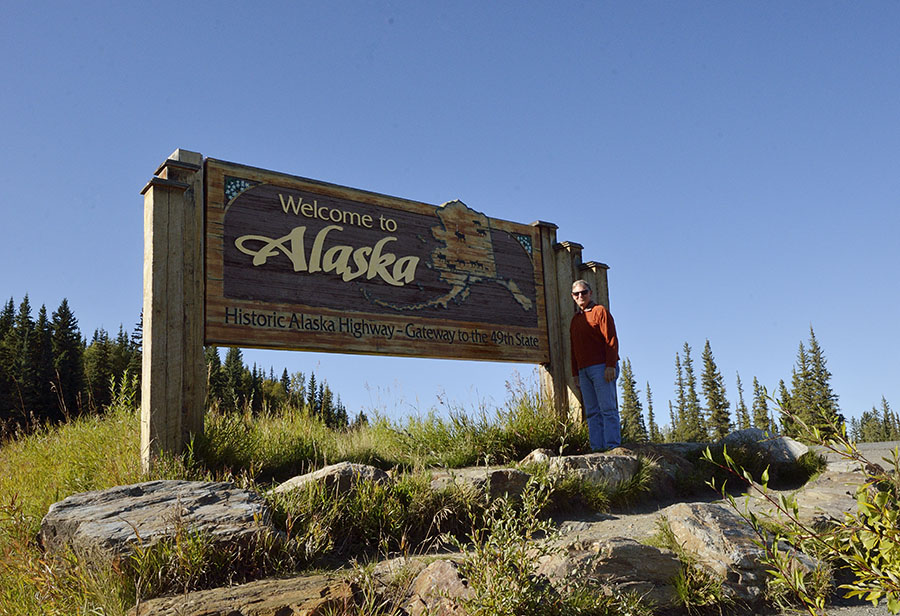 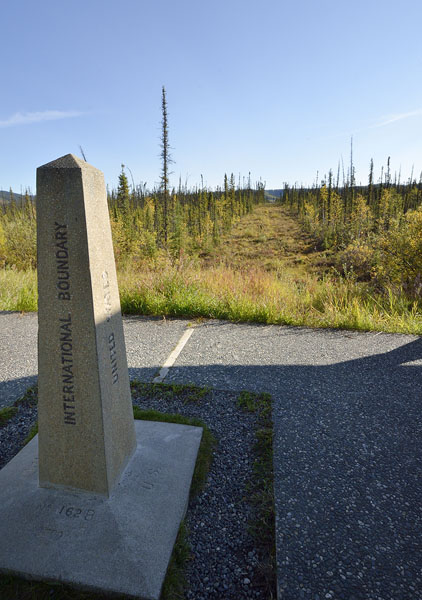 The border is funny because the Customs stations for the U.S. and Canada are about 20 miles apart, and there’s a little rest stop at the actual border where you can walk around and step between the two countries.  You can see the swath of cleared land that demarcates the border, running as far as the eye can see in both directions.  It took the International Border Commission 50 years to physically survey the entire length of the Alaska-Canada border – this is rough country!

The last thought for today is to remind you how big Alaska is – it’s 2.4 times larger than Texas, and yet there are very few roads.  We drove on a lot of Alasks’s roadways on this trip, but we only saw a small portion of the state.  Here’s a map that shows all of Alaska’s roads (Routes 1-11).  Notice how much of the state can only be accessed by air or (sometimes) by water. 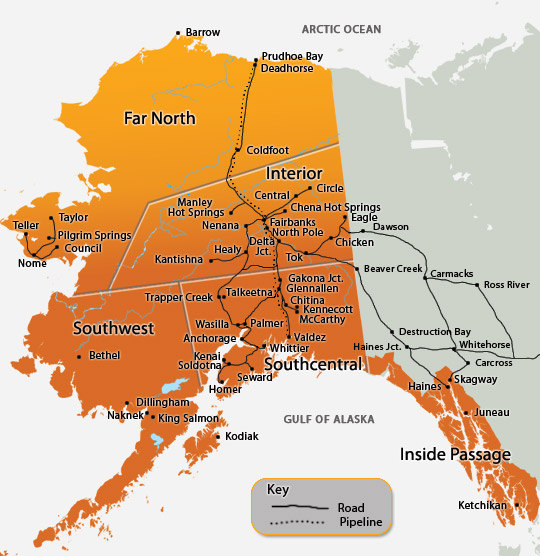