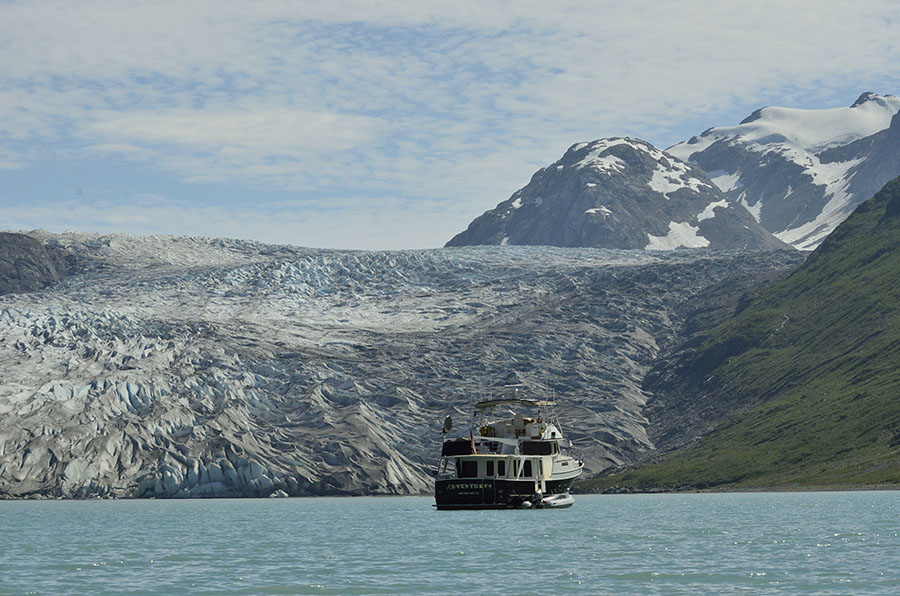 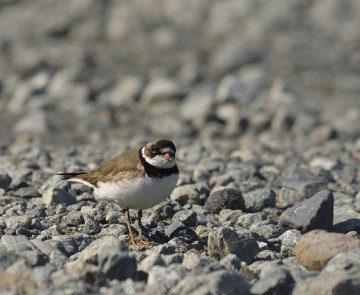 With the concentration of wildlife and grand scenery at every turn it’s easy to get “overstimulated” in Glacier Bay, and after days of constant excitement I start to feel pretty wiped out.  After watching the nursing brown bear, mountain goats, and glacier hike with the black bear all in a day and a half, I needed a little down-time so I put the kayak in the water and grabbed a camera to photograph some wading birds on the nearby shore.  This semi-palmated plover really blended in with the gravel beach, and the least sandpiper was even harder to spot, though there were several in the area. 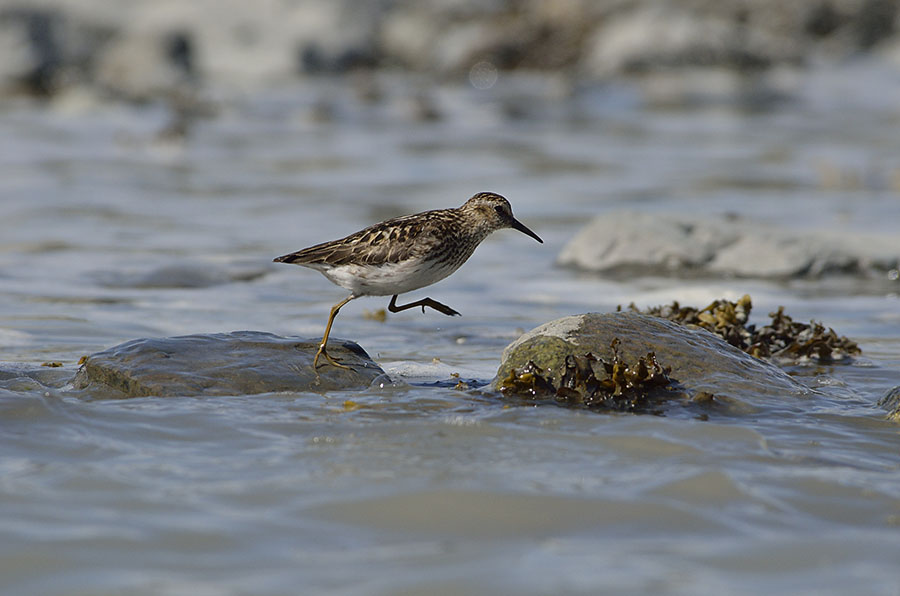 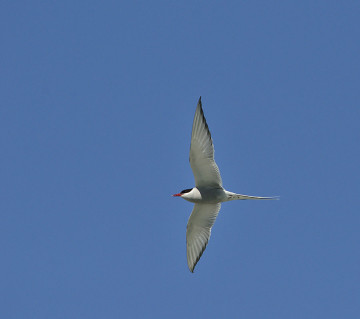 Black oystercatchers were napping in the shade of a big rock, and a kittiwake flew overhead, chirping at me so I must have been getting too close to its camouflaged nest.  I paddled to a different part of the shoreline but some arctic terns started raising a big fuss and dive-bombing me – at one point I only had the camera to defend myself, waving it in the air to keep the bird away.  As soon as they flew off I moved away from the shore since I suspect this was another case of defending a nest close by.  So much for a relaxing paddle!

There were some interesting rock formations across the cove which looked like a more benign place to paddle and unwind.  As I was half-way across the cove I heard a loud, sharp exhale and a big splash… 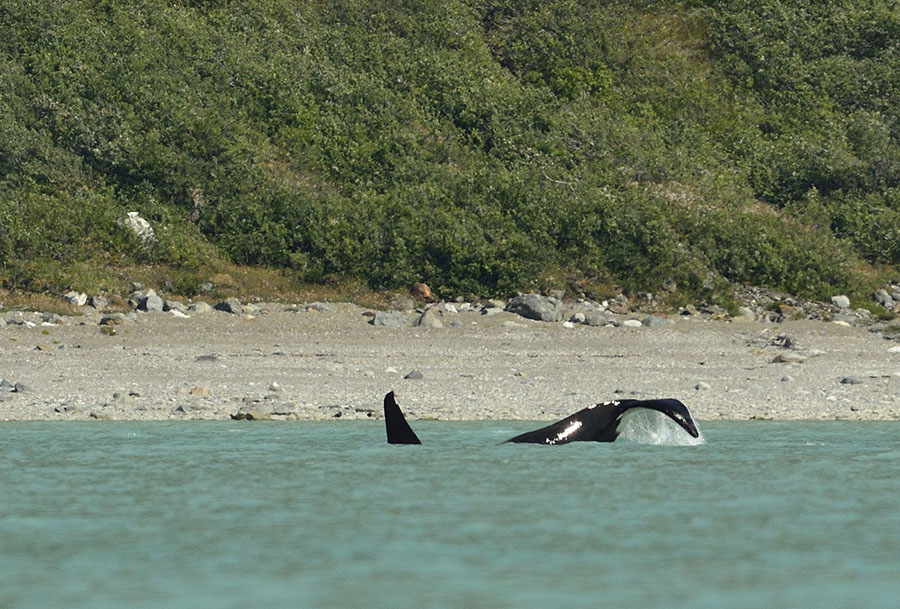 …orcas blowing and tail-slapping!  In some parts of the Pacific Northwest orcas are more common, but in SE Alaska it’s a real treat to see them.  We had been hearing reports of sightings in Glacier Bay over the past week and we spotted a lone male several days earlier, but this was a small group right in our cove.  The sheer rock walls amplified their loud exhales (“blow”) so it sounded like they were all around, though they’re easy to see with their striking black and white coloring. 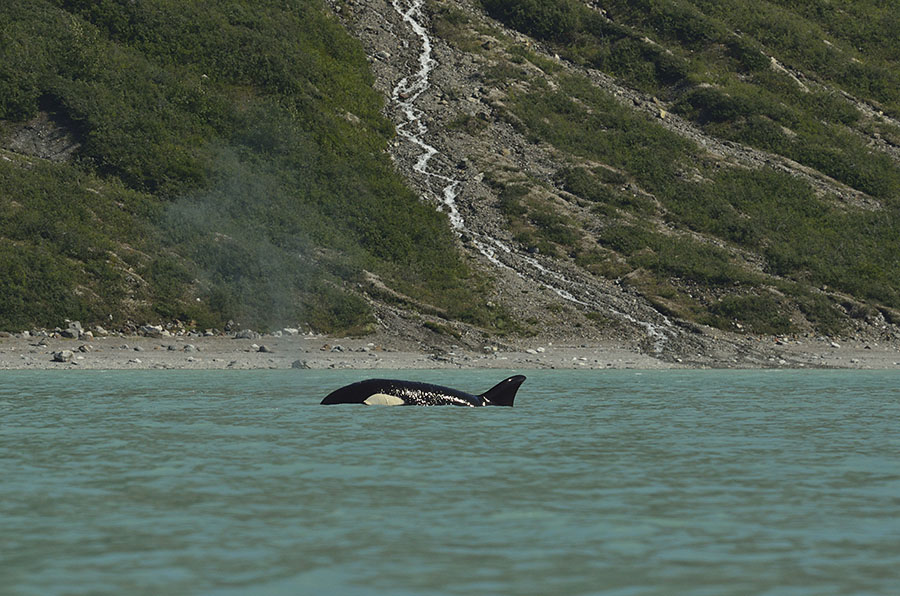 When I’m paddling in an area where whales are present I periodically slap the side of my kayak to alert them to my presence, since humpbacks use passive listening rather than the more common echo locating that other types of whales and dolphins use.  As I slapped the kayak in response to hearing blowing I realized that the orcas are echo locaters so they probably were already aware of me, and I began to wonder what they might do, and if the slapping would attract them (not a desirable thing, I think).  I got a little nervous every time they disappeared for a few minutes, wondering where they might reappear.  The first sign that they’re back on the surface is the sharp sound of their blow, and I was a comfortable distance from them as they dove and surfaced.  Until… 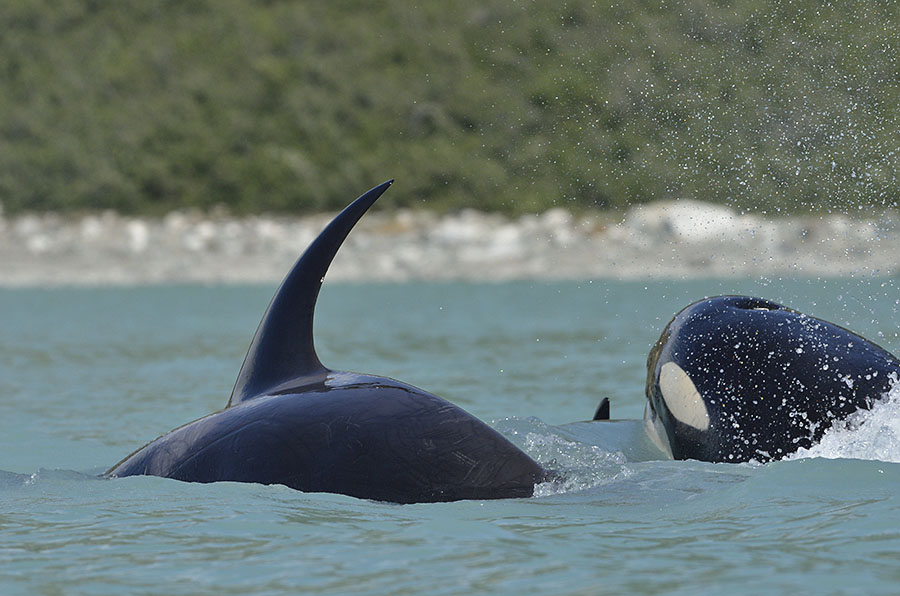 …they appeared about 30′ away from me, and I couldn’t un-zoom the lens fast enough.  The sound of their blow so close was quite startling, and my heart was pounding as I wondered if they might decide my kayak was a plaything.  They just came over to either give me a little scare or to just say hello before they began moving out of the cove towards the wider bay. 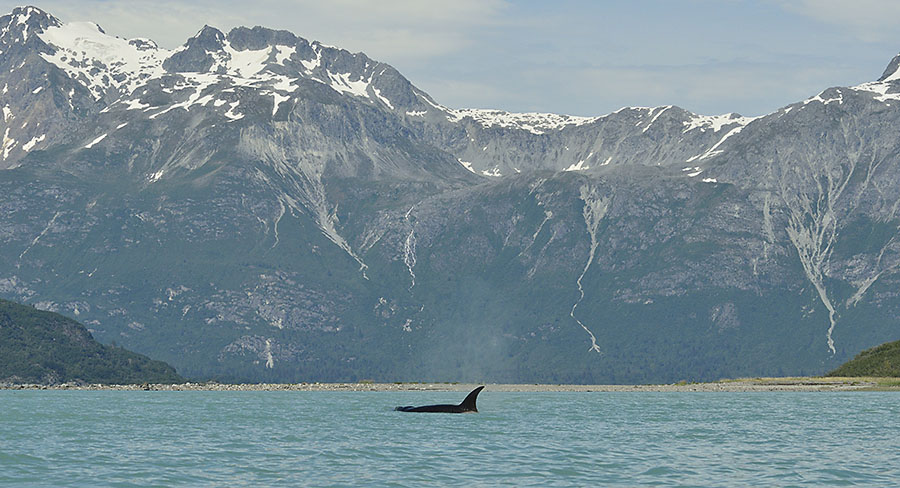 While all this was happening I was hoping the rest of the crew aboard ADVENTURES heard or saw the orcas, and I felt badly that I didn’t have a radio with me to alert them.  Sure enough, when I asked if they saw the orcas they thought I was joking until I showed them the photos.  Pounding heart PLUS guilt! 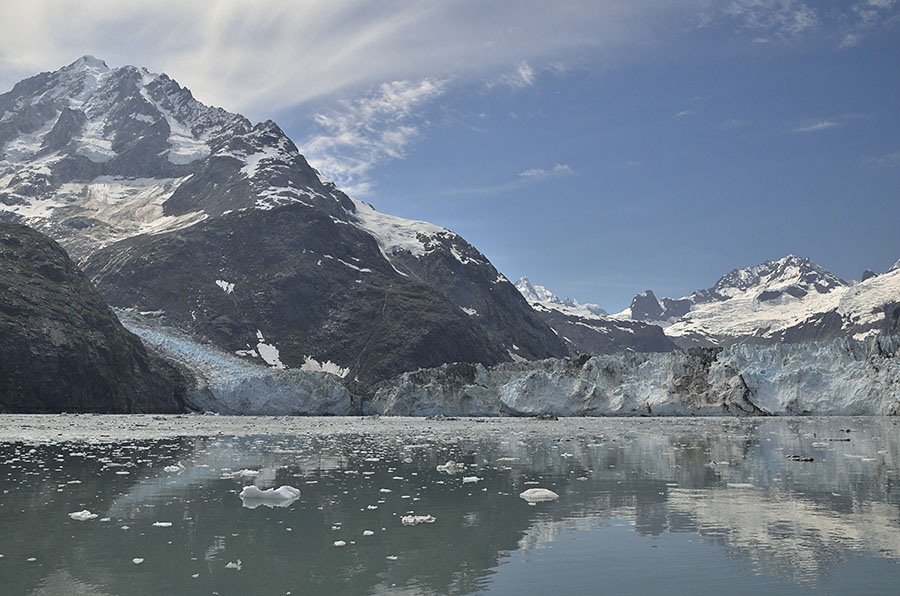 Seals were scattered on the brash ice near the face of the glacier, and we’re only allowed into this inlet by the Rangers after the seal pupping season has ended. 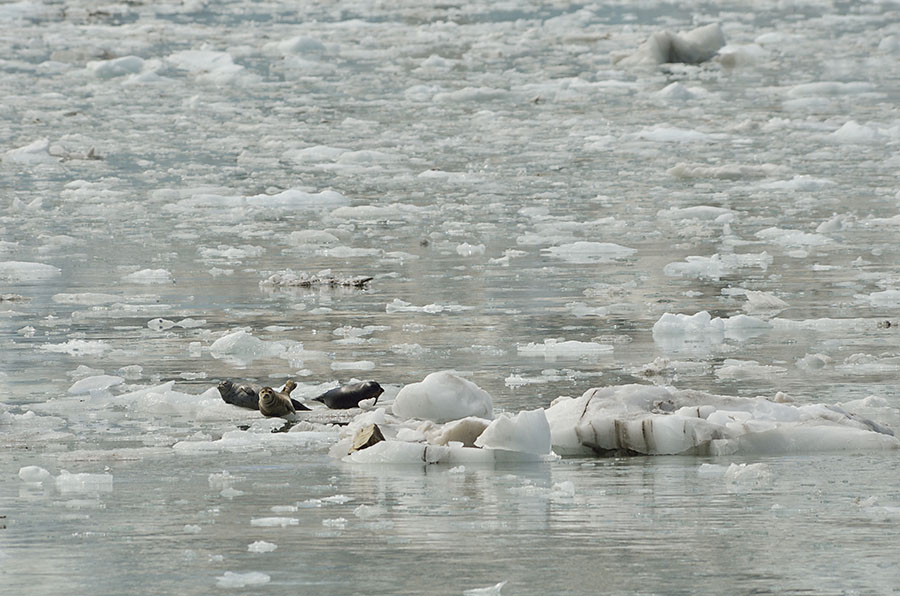 The seals swam behind us, always shy, and diving when we turned to look at them.  We really enjoyed the beautiful warm day, and Hank (the consummate Floridian!) was in bare feet on the bow while Jim scooped up a small piece of glacier ice to look at.  We had to navigate around a few bergy bits, and we marveled at the shapes and colors of the ice. 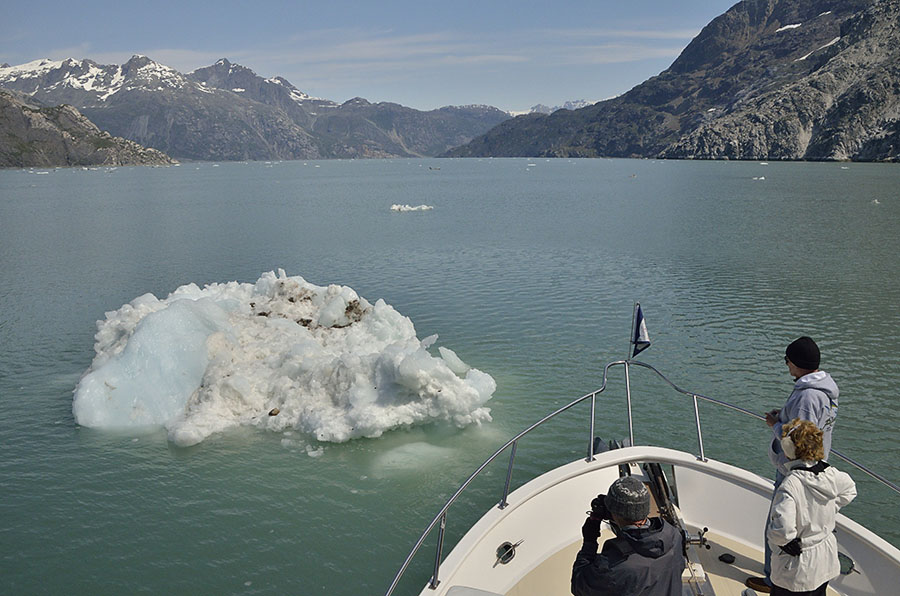 We stopped by the Lamplugh Glacier (my favorite) for a few last glacier photos before we headed back down the bay. 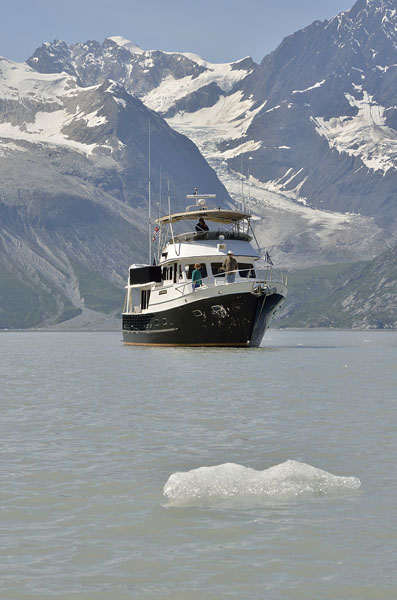