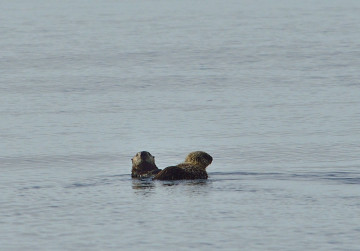 The last segment of the beautiful El Capitan Passage took us on a winding path through rocky islands and into Sea Otter Sound.  We saw many sea otters along the entire Passage, and we love to watch them – so adorable.  But sea otters are the enemy of fishermen since they prey so heavily on crabs and clams, and they have no natural predators to keep their numbers in check. 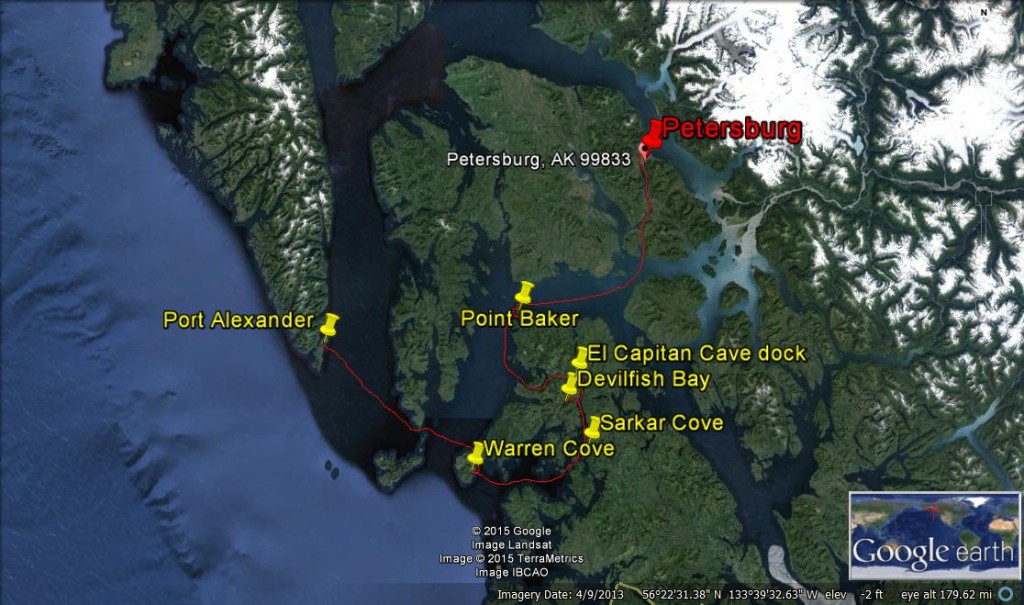 From Sea Otter Sound we came through a narrowing and out into the open sea – next stop: Japan.  We had calm conditions for traveling, but you know you’re in the ocean because of the swell.  We chose an anchorage on the east side of Warren Island, but the swell actually wrapped around the island and found us anyway.  We experienced the same thing in the Exumas islands in the Bahamas often – like being gently rocked, except that it doesn’t stop!

Warren Cove has a huge sandy beach which isn’t very common, so I jumped in the kayak with cameras and bear spray to do some beach combing since the tide was low. 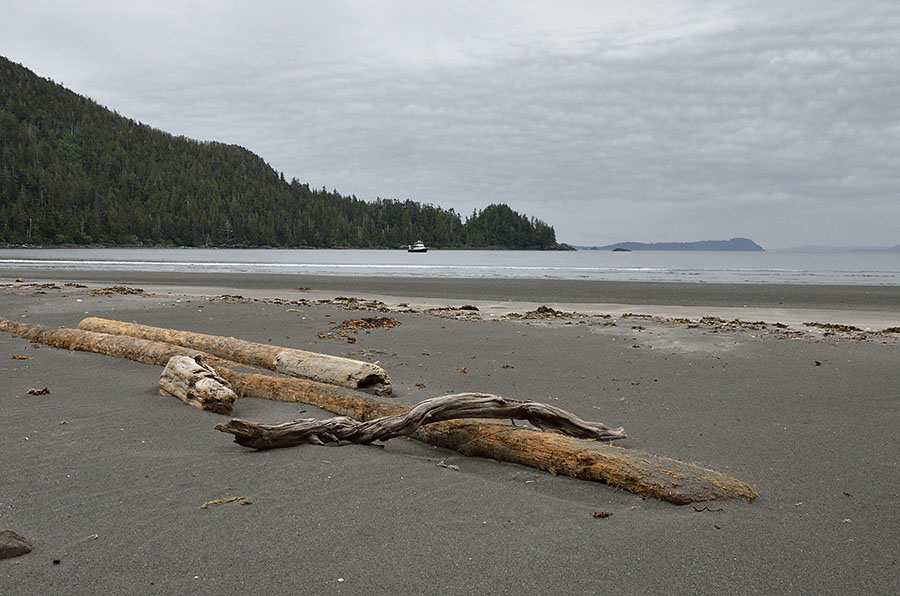 Clam shells on the beach were the biggest I’ve ever seen, and I found a few other unusual shells and a glass insulator of some sort.  Sadly there was also a lot of plastic trash washed up on the beach – far more than I could hope to carry in the kayak.  Some of the trash was fishing related, and about half of that had Japanese writing on it. 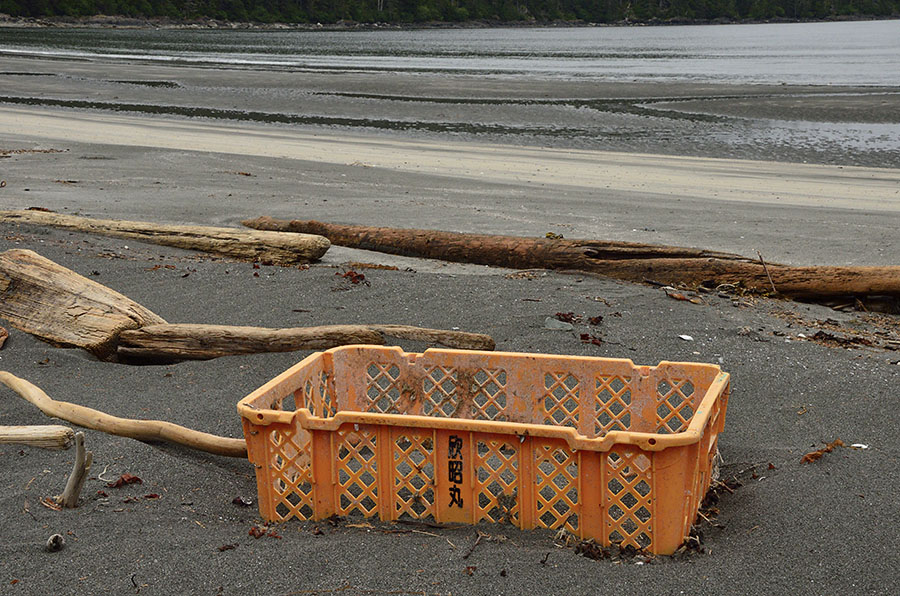 I wish everyone could see the horror of plastic trash spoiling a pristine, remote beach.  We saw the same on the east side of many of the islands in the Exumas – so sad.  Reduce-Reuse-Recycle.  Bring your reusable bags when you shop.  Please be mindful of the environment – every little bit helps. 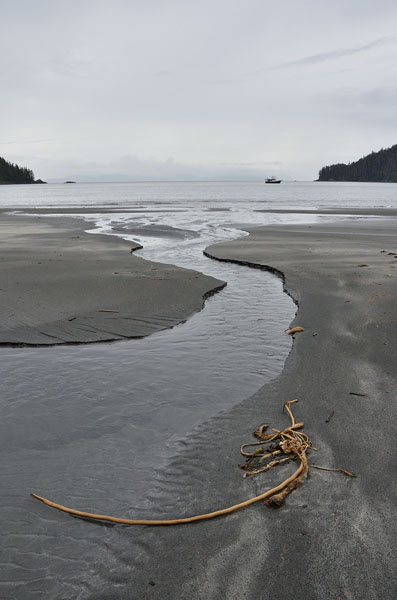 We had a beautiful day to head around Cape Decision, though some fog settled on the water with blue skies overhead for a while, clearing in time for us to see the lighthouse.  Cape Decision was named during the explorations of Captain George Vancouver in 1793, along with many of the other islands and points in this part of the world.  Cape Decision is where Captain Vancouver decided that he had traveled far enough north, beyond the islands claimed by Spanish explorers; today Cape Decision is a relatively narrow but important passage for ships traveling north and south in SE Alaska.

We had beautiful conditions to cross open water to the southeast tip of Baranof Island, to the tiny town of Port Alexander.  One of the floatplane pilots in Ketchikan used to live in Port Alexander and recommended that we check it out.  We found an empty spot on the state dock to tie up so we could stretch our legs, walking the boardwalks that connect the scattering of homes and small buildings that make up most of the community. 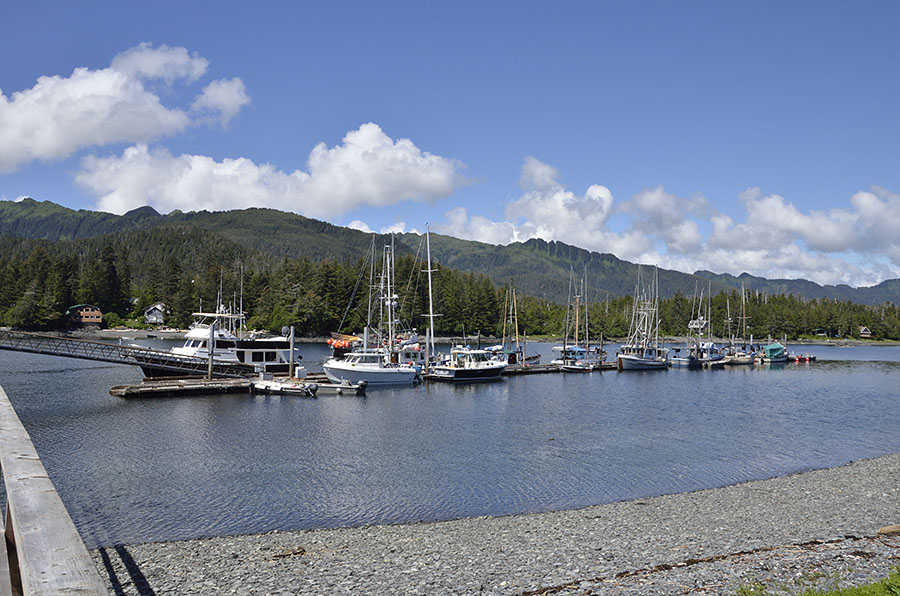 People were welcoming and friendly, and we were happy to find a tiny coffee shack/cafe where we could get some lunch.  It’s always a treat to have a meal that we didn’t have to cook ourselves, no matter how simple. 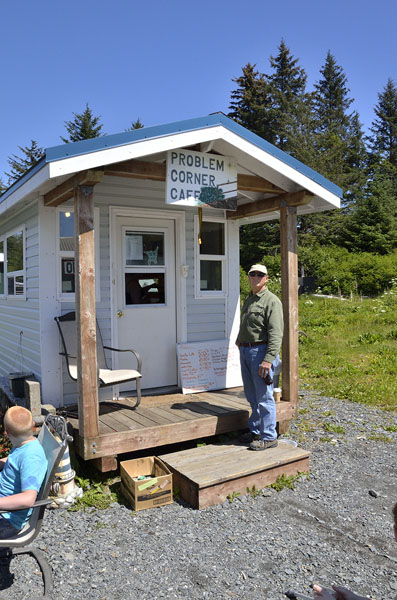 We sat with a local family, talking about school, life, and fishing.  There are about 30 people that live in the community through the winter, which can be particularly hard since the harbor is open to the southeast where most of the winter storms come from.  Boardwalks serve as the community’s streets, and there’s a school, tiny store, and post office. 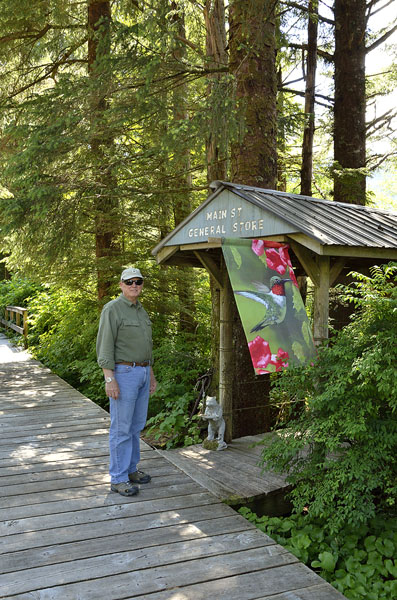 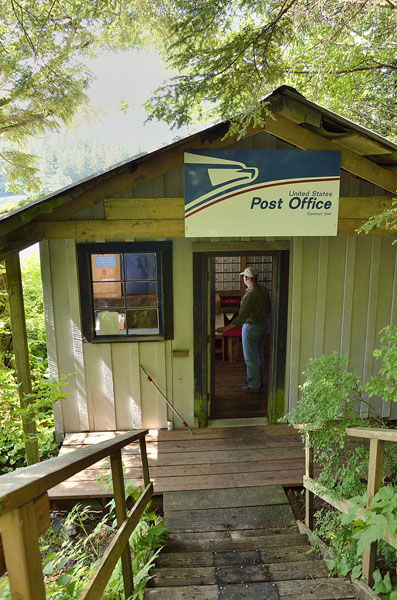 Just up from the coffee shop is a little wooden booth with a telephone in it – not a pay phone – just a regular phone, and a printed list of the phone numbers of everyone in town as well as some emergency and convenience numbers (Sitka hospital, seaplane service, etc.).

All along the boardwalk the berry bushes were full of berries in various stages of ripeness. 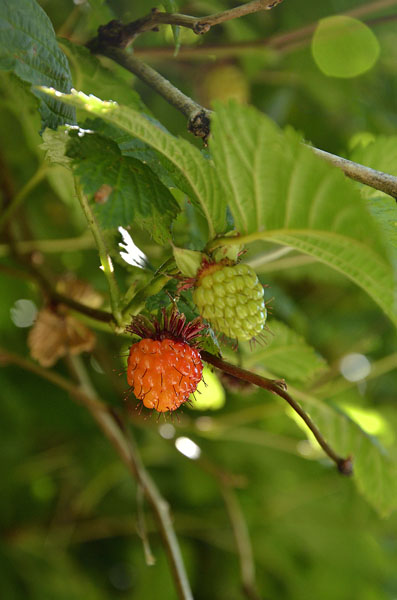 And there was plenty of cow parsnip and devil’s club – plants that are poisonous and thorny, so it wouldn’t be a good idea to venture off the boardwalk! 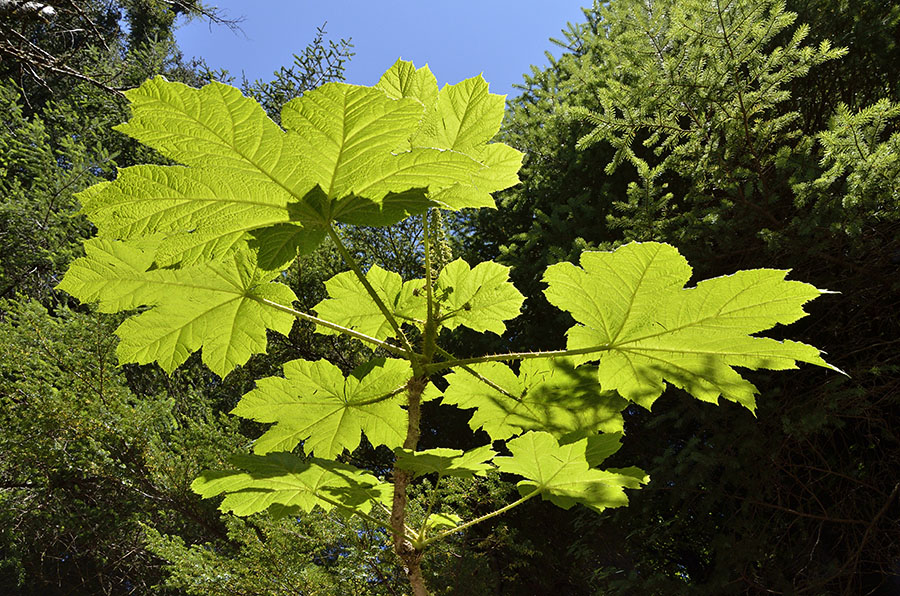 We spoke to one lady who is a retired teacher, and she told us a bit about the school.  Teachers come from the SE Alaska Island School District which serves many of these small remote communities, and they try to hire teachers with young children to help boost the population.  There’s a newer school and gym, so the old school building is sometimes used as a dormitory for visiting teachers, or teachers who are new in town and haven’t settled in a house yet.

We enjoyed the walking and talking with people, but we had good weather to keep traveling so we left the next morning to continue up the east side of Baranof Island. 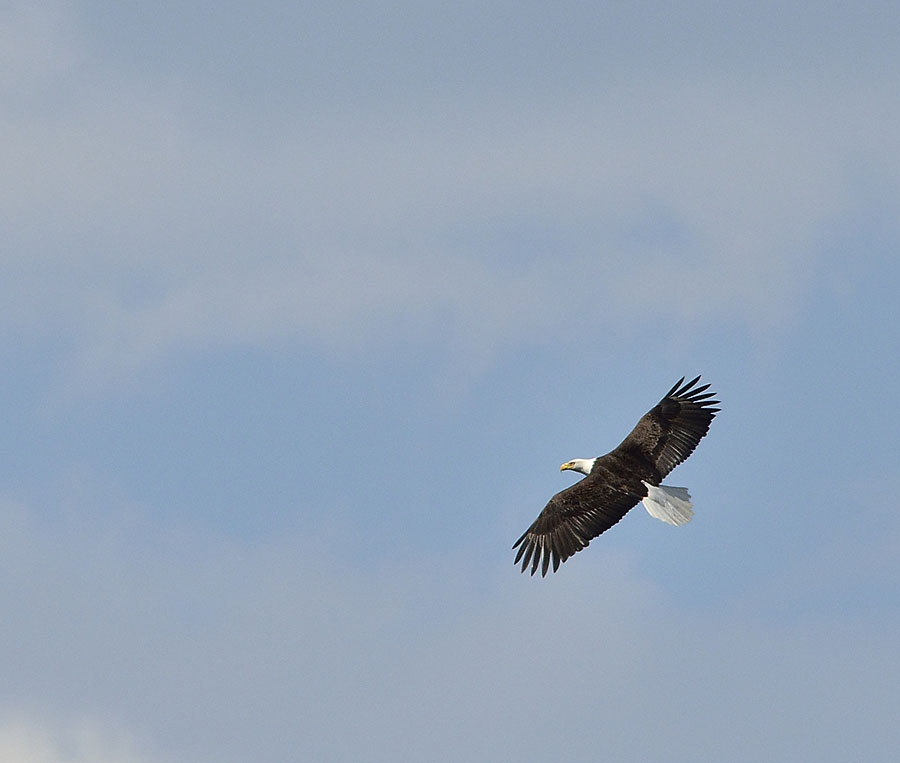