After spending a little time with friends in Petersburg and one last ride Out the Road (where we saw a number of porcupines, deer, and a grouse hen with her chicks), we cast off the lines for the summer’s cruising.  Our first stop was the little community of Point Baker, located at the very top of Prince of Wales Island. 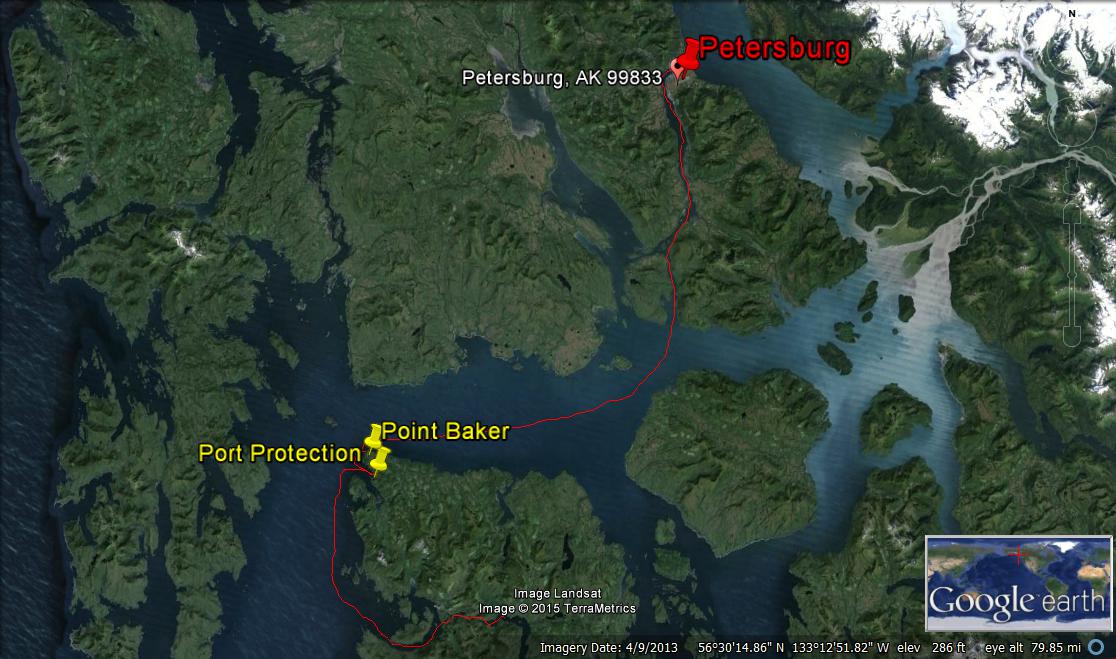 Did you know that Prince of Wales Island is the 3rd largest island in the United States?  Do you know what #1 and #2 are?  (#1 is Hawaii’s Big Island, and #2 is Kodiak.)  As large as Prince of Wales (or POW, for short) is, the settlement at Point Baker is tiny – about 25 residents. 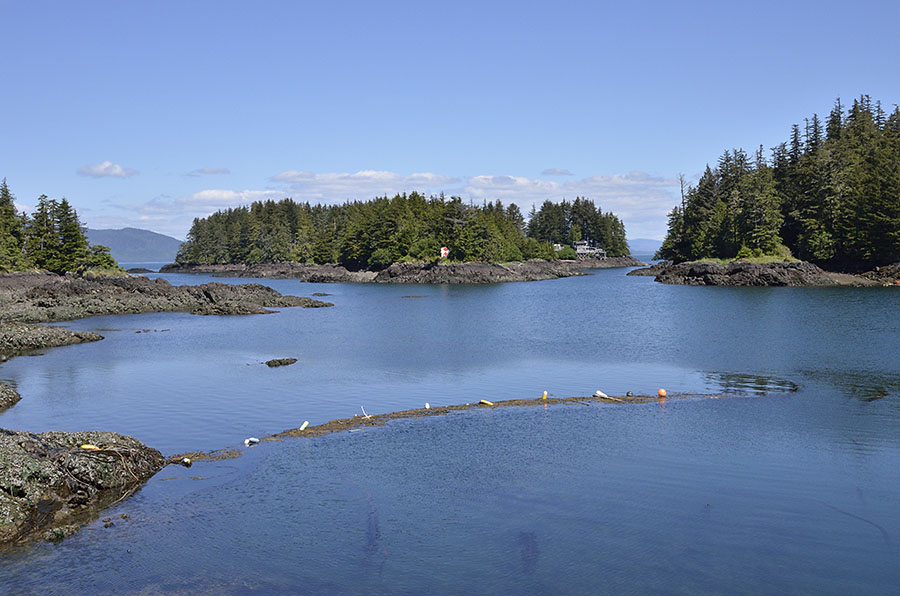 The community is a scattering of houses perched on the craggy shores of POW and on some islands separated by narrow rocky channels.  We were hoping to see a friend from Petersburg who was fishing in the area, but he did so well fishing the day before that he had left already.  The locals didn’t have much to say to us, though they would answer questions if we asked.  I guess people who want to live in an outpost community aren’t very sociable.

The state dock was mostly full of scruffy boats and borderline derelicts, and there was a tiny store, bar, and cafe on a float right next to it.  The store is open from 12-2 most days, and it primarily stocked beer, soda, and chips, along with a few other necessities.  The bar didn’t seem to be open, and the cafe wasn’t open yet – they said that maybe they would serve some food in the bar at some point. 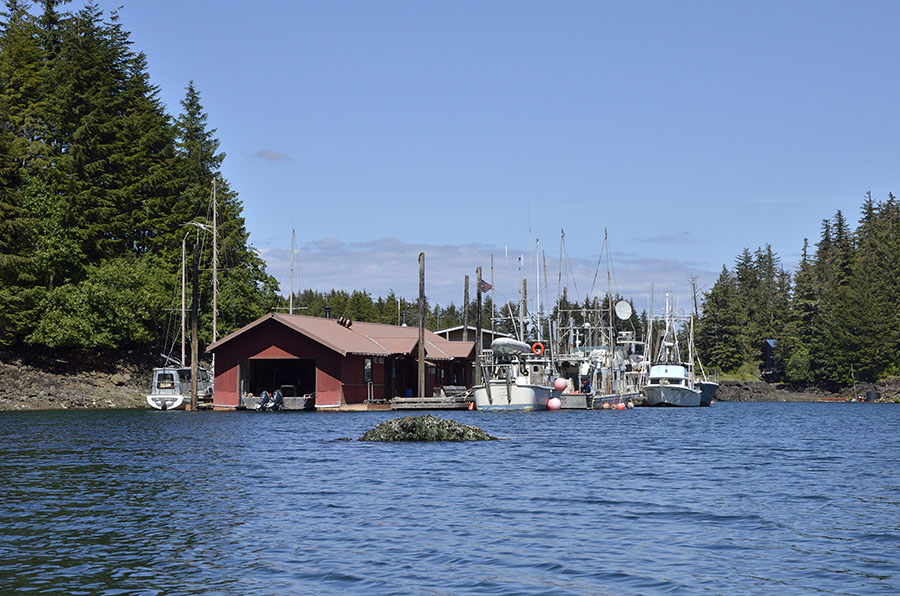 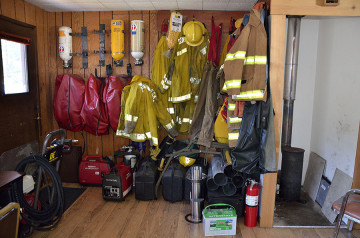 The red building in the photo is the combination Post Office, Community Center, and Fire House – all in one 100′ long floathouse.  The Community Center had a table and some bookshelves, and in the back corner was the firemen’s gear.  The fire boat is sticking out of the end of the red building.  At low tide it might be impossible to get close to some of the houses if there was a fire.

Despite the lukewarm reception from the humans, Point Baker had fantastic sea life – due to the straight-through passages for the tide to run, and the proximity to the open ocean.  There were lots of sea otters and seals, and the anemones were plentiful and quite large.  I was able to kayak out the western channels at the end of the ebb tide and I found walls of small anemones just waiting for the tide to return, hanging gelatinous blobs kept company by a starfish or two. 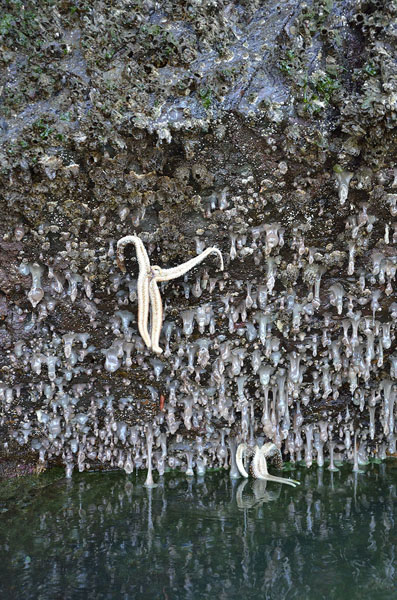 In the deeper water, where they would remain immersed at any tide level, the plumose anemones were the size of my arms – yowza!  And here and there along the rocky shoreline were my little friends, the mink. 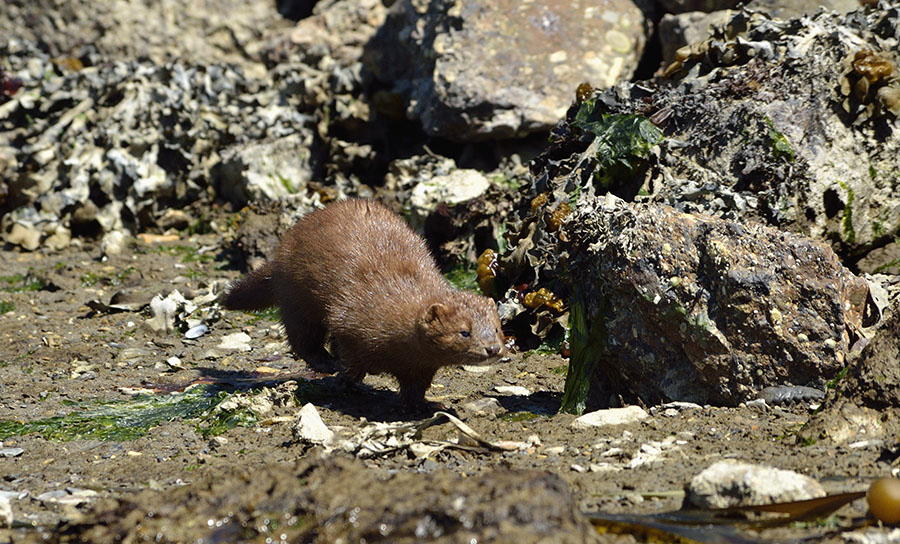 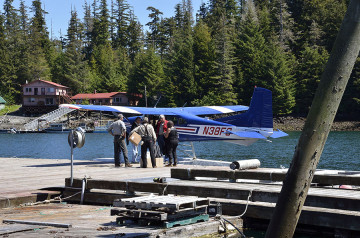 A seaplane landed with some supplies and a few people, but the postal plane didn’t make a landing while we were there.  The Postmistress was out on the seaplane dock with some mail bags and boxes, and the plane circled twice, but flew on.  Mail comes and goes on it’s own timetable in places like this.

We left Point Baker and cruised a few miles down to neighboring Port Protection, another small outpost community, but again the dock was mostly full of scruffy boats and there wasn’t any room for us.  We decided to keep going and begin our exploration of El Capitan Passage.