I was sad to leave Little Port Walter and all the marvelous underwater life, but on the bright side we were heading to another new place on Baranof Island’s eastern side that we heard was very dramatic: Gut Bay.  The bay itself is pretty large, but the entrance is only about 150′ wide and there, right in the cut was a humpback feeding.  Hello – Welcome to Gut Bay! 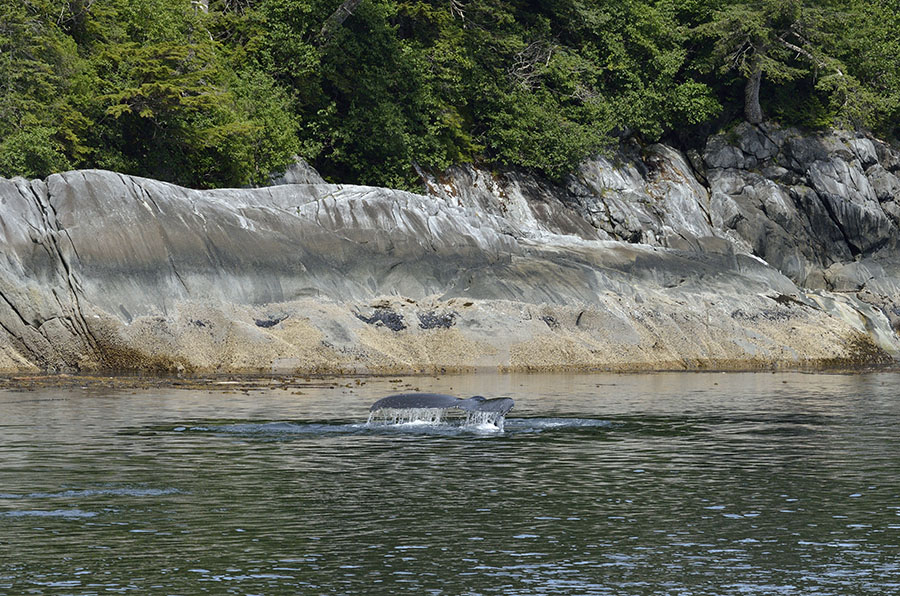 Alaska is a place where superlatives are often lacking and the best word I can think of for Gut Bay is “breathtaking”, which falls short.  Steep-to cliffs and tall mountains surround the Bay, particularly near the entrance.  It’s difficult to pay attention to navigation between the whale and the scenery, but we soon noticed that the electronic chart (chart plotter) was very inaccurate.  Many of the charts in Alaska are very old and not always correct, and there are still many areas that have not been formally surveyed – this was the case in Gut Bay, particularly at the head.  We carefully sounded the anchorage to find a good flat area and clear swing circle – which the chart plotter indicated was dry land!

High tide meant it was the perfect time to kayak up the creek at the head of the bay, giving access to meadow and valley with a good number of bald eagles fishing in the streams that fed the creek. 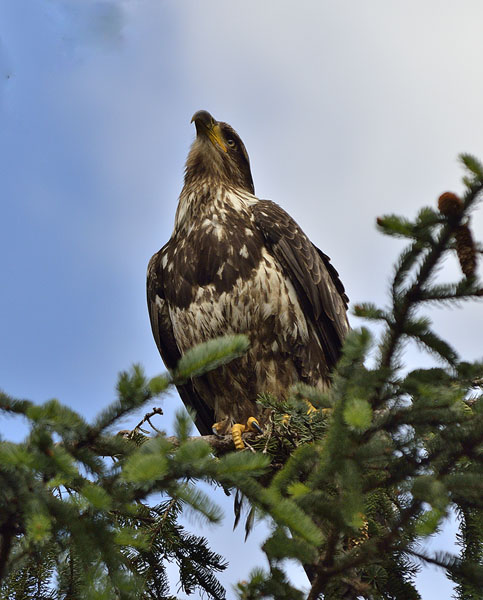 We kept an eye out for bears or wolves, but only saw the eagles and kingfisher, and a seal.  We stayed one night, and as we were cruising out the entrance cut we again saw a whale feeding.  It dove before we got to the narrow spot, and re-appeared behind us, with the sound of its blow echoing off the rock walls.

Cruising up Chatham Strait we headed to Red Bluff Bay, which was a favorite spot from last year – another really beautiful place. 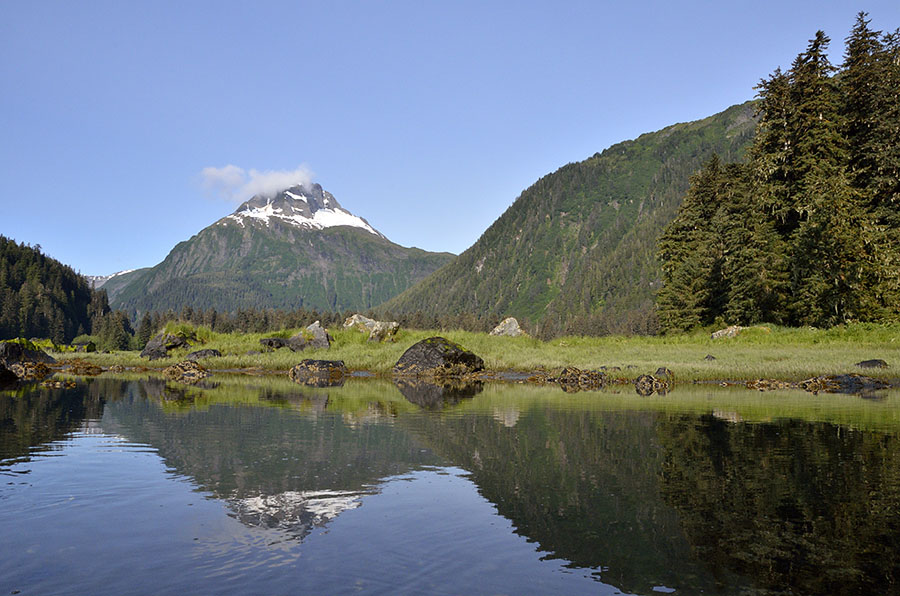 We experienced a “small world” moment when we rounded the corner towards the best anchoring spot and found a friend’s boat just pulling their anchor to leave – hopefully we’ll catch up with them later in the season somewhere.

We expected to see bears in the meadow at the head of the Bay, but it turned out to be a Brown Bear Festival!  We saw 6 brown bears the first day, and at least that many the second day. 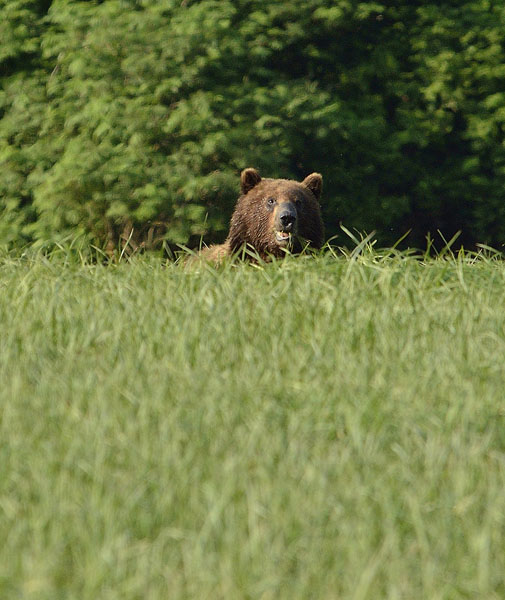 On the first day the tide was rising and I jumped in the kayak to explore.  The head of the bay is a very long shallows, so the accessible area is much greater when the tide is in.  I paddled into a little side area that I hadn’t been in before, and I just sat listening to the birds and drifting.  Sometimes I talk to myself, and this was one of those times – I said aloud “wow, this is so beautiful”, and the next thing I know three brown bears pop up from behind a little rise – two of them standing upright, about 75′ away.  Excited, thrilled, rattled, scared – I reached for the camera, but by the time I got it to my face the bears had turned around and were running into the woods, up the hill.  One of them paused to look back at me… 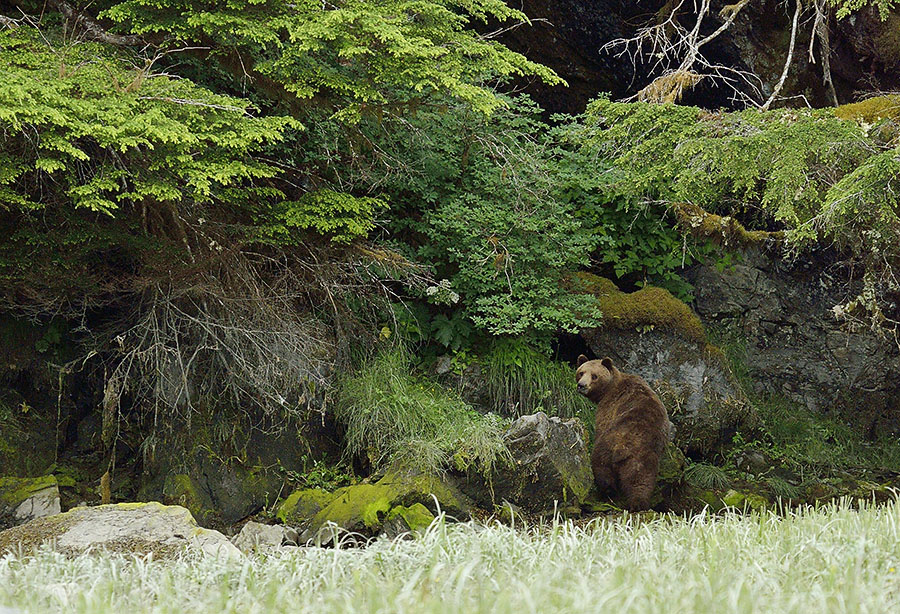 …and I saw one stop and peek at me through the trees as they made their way noisily up the wooded hillside.  WOW.  Lots of adrenaline for me and those bears.

The next day I was working on something in the cockpit and Jim came out and whispered “there’s a bear right behind the boat, on shore.”  I grabbed my camera and he got his video and we watched a younger bear forage by the water’s edge, climbing over fallen trees.  He had a lighter colored body and dark legs that looked like pantaloons. 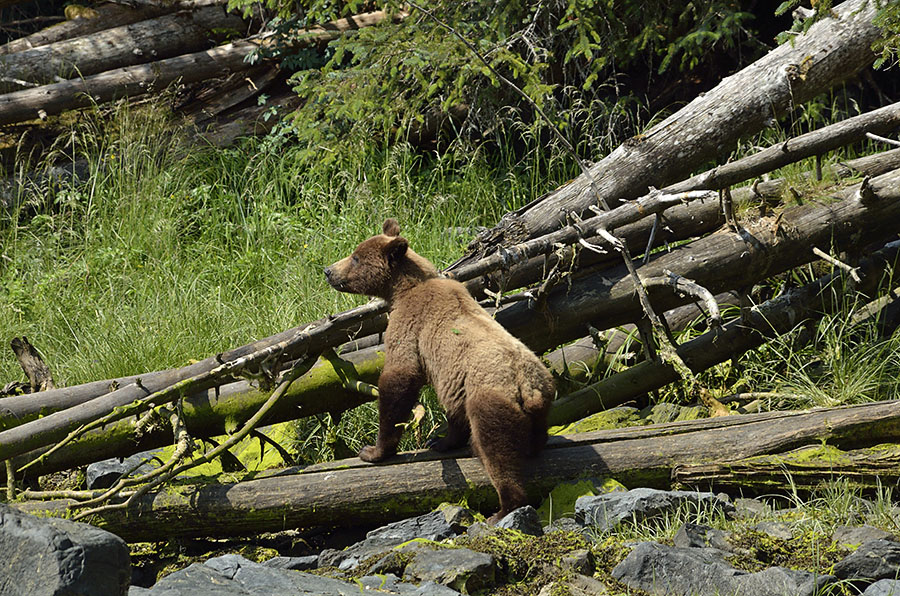 In the midst of watching this bear a pair of bald eagles flew right overhead, escorting their young eagle.  Wildlife overload.

After a while I got in the kayak to get just a little closer, but I was barely away from ADVENTURES when the bear stopped to look at me, and then ran off into the woods.  I didn’t mean to disturb him – I was a good distance away, but he was quite skittish. 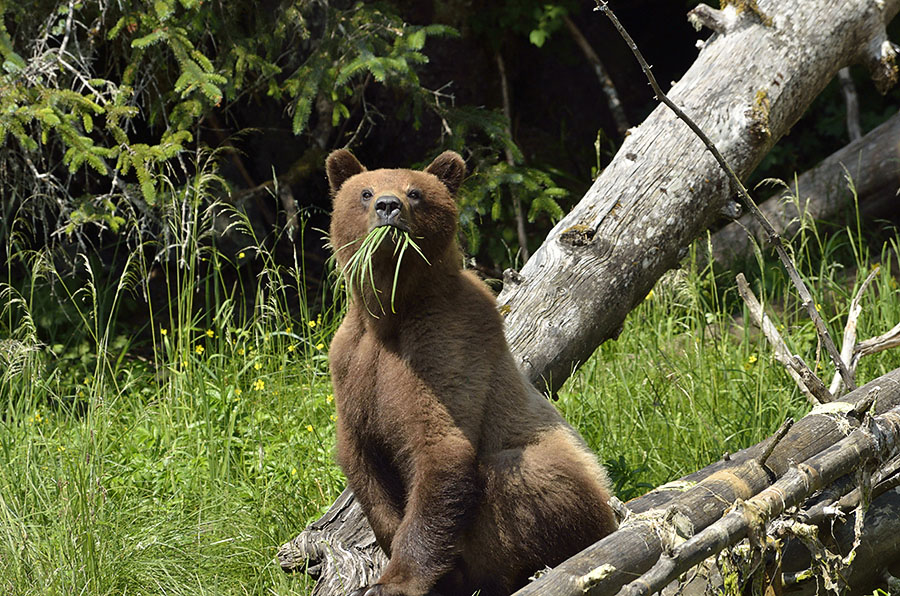 The wind started picking up but since I was already settled in the kayak with cameras I went to check out the “three bears” spot from the day before.  Sure enough, as I rounded the corner there was a good-sized brown bear right on the shoreline.  Grass is the bear’s main diet until the salmon come into the streams and berries are ripe. 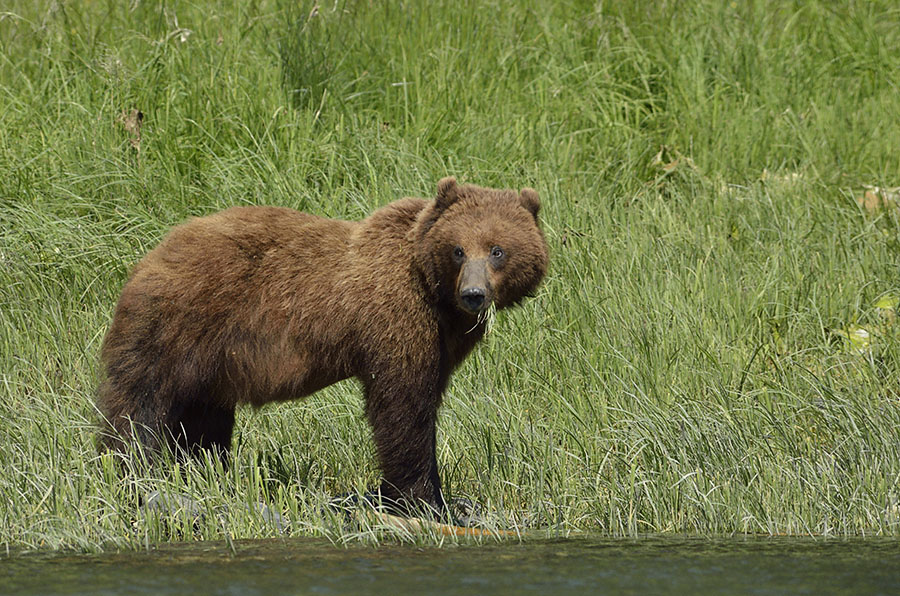 This bear was not afraid of me, but I have a healthy respect for bears so I paddled backwards to give him plenty of space.  All the bears I’ve watched, with binoculars or at closer range, always pause to look around when they’re eating.  He noticed me, but didn’t pay any attention.  I typically waited until he was looking at me to take photographs, but he didn’t react even when the kayak made some noise bumping a rock.  The bear went about his business, eating his way along the shoreline while I kept my distance, got some photos, and then left him alone.  I like this photo because it makes him look mean and angry, but the truth is that I just caught him as he was raising his head up with a mouth full of grass. 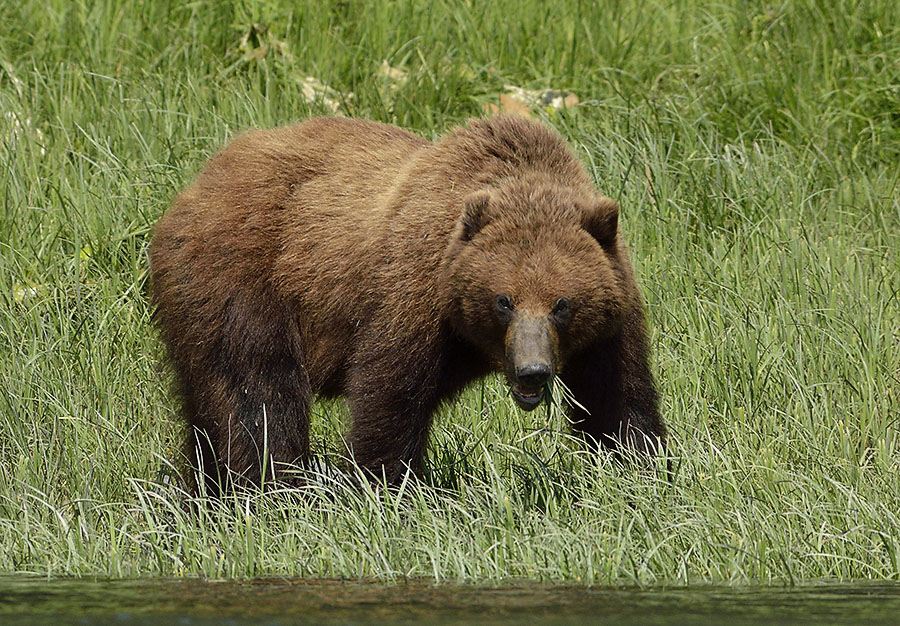 We leave places so we can explore new ones, but Jim recorded some time-lapse video as we pulled up the anchor and headed out of Red Bluff, with a close-up stop at the big roaring waterfall.  We call this set-up “ADVENTURES-Cam”. 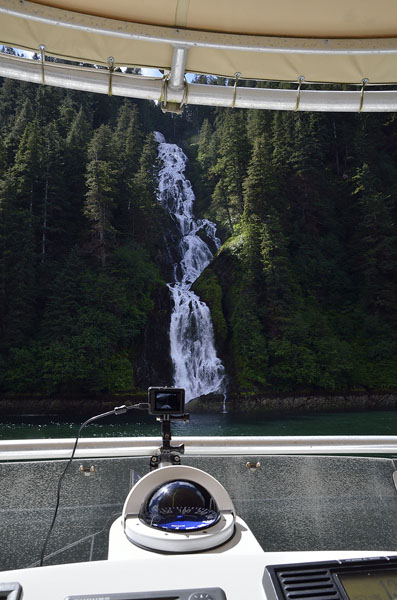