The holiday season continues in full swing here in Petersburg with more concerts, a holiday fun run, the annual Audubon Christmas Bird Count, and wonderful hospitality from new friends.  We were walking down the street after working out at the community center the other day when we were gently herded into the home of new friends Grant and Lila for some conversation and some fresh-from-the-oven Norwegian kringle. 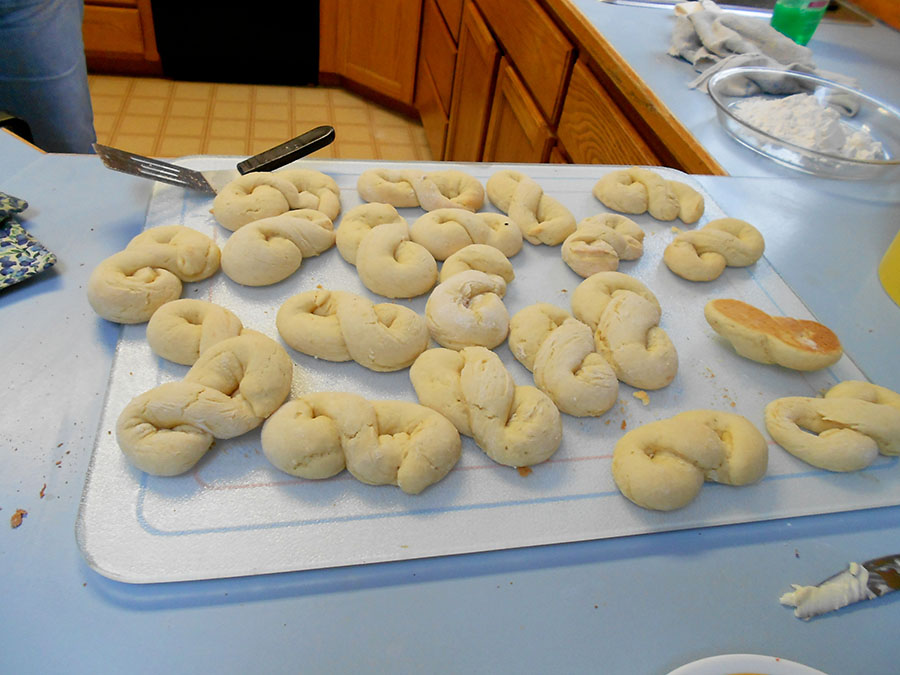 The kindness and warmth of the people we’re meeting here is remarkable, and we’re enjoying learning more about the area and about the culture.

Petersburg really lives up to its nickname of “Little Norway” at the holidays, with the tradition of Julebukking taking center stage this week.  Julebukking is an old Norwegian tradition that was originally pagan in origin, but was later adapted by the Christians.  In its purest form it’s a little like Halloween at Christmas where people would dress up in costume and visit their neighbors, and the neighbors had to try and guess who they were.  Food and drink featured prominently.  It’s a variation on the idea of a holiday open house, and here in Petersburg it’s practiced by the various businesses around town (and you don’t have to dress up in a costume!).  There are so many local businesses hosting Julebukking that the paper had to publish a schedule of which places are hosting on which days, culminating with 10 different places today.  We finally came home early today – utterly Julebukked-out – but it has been a great way to get to know people in town and we’ve had a ball.  The holiday feeling here is old-fashioned – festive and happy.  People greet each other on the street and hearty wishes of “Merry Christmas!” are everywhere – between friends and strangers alike.

The best of the Julebukking was today at the hardware store where they had a nice spread of noshes, punch, and the feature:  “Moose Milk”.  “Moose Milk” starts with this: 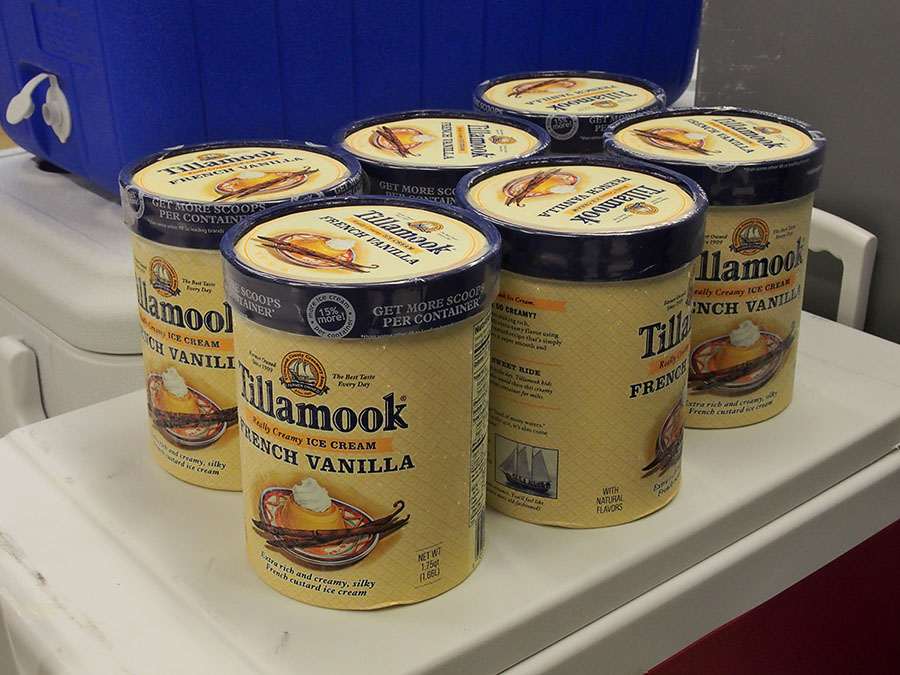 To which you add some liquor named “White Christmas”… 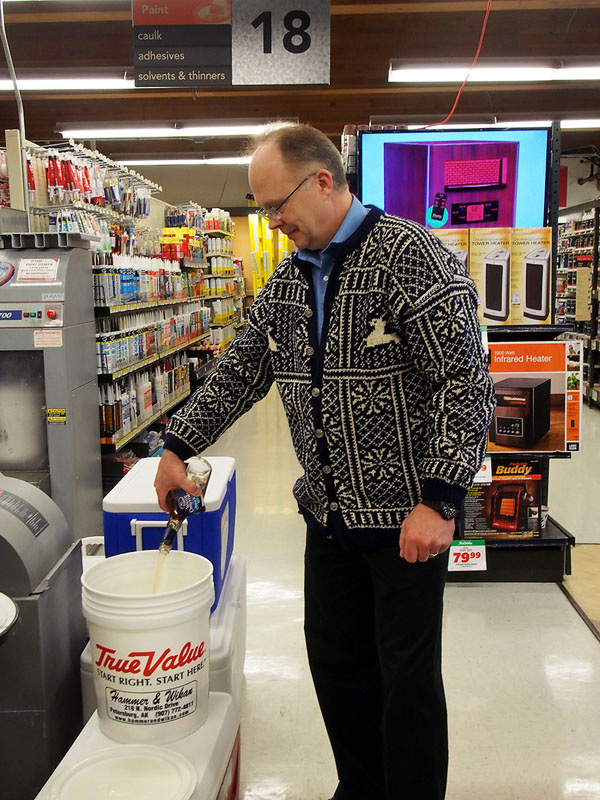 And then you put it into the paint shaker… 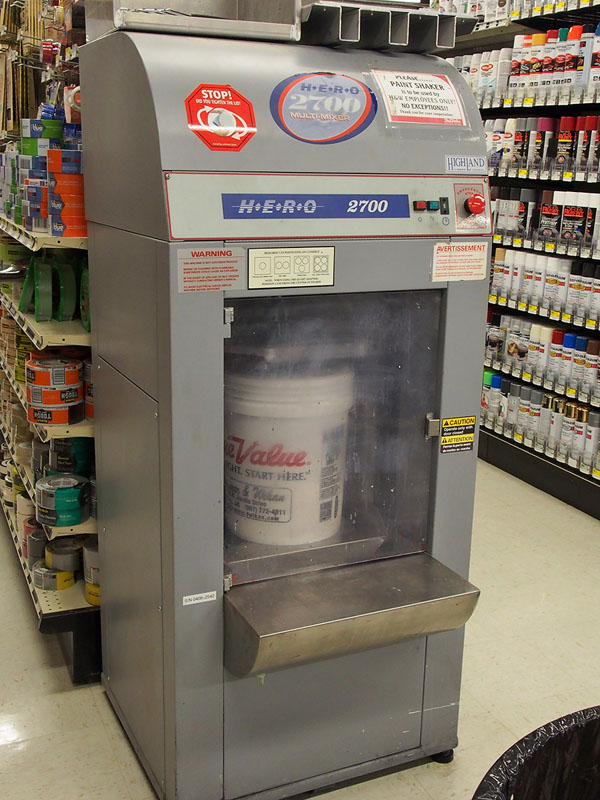 And when it’s sufficiently shaken (not stirred), you pour it into an elegant bowl, and serve it with a dash of nutmeg on top! 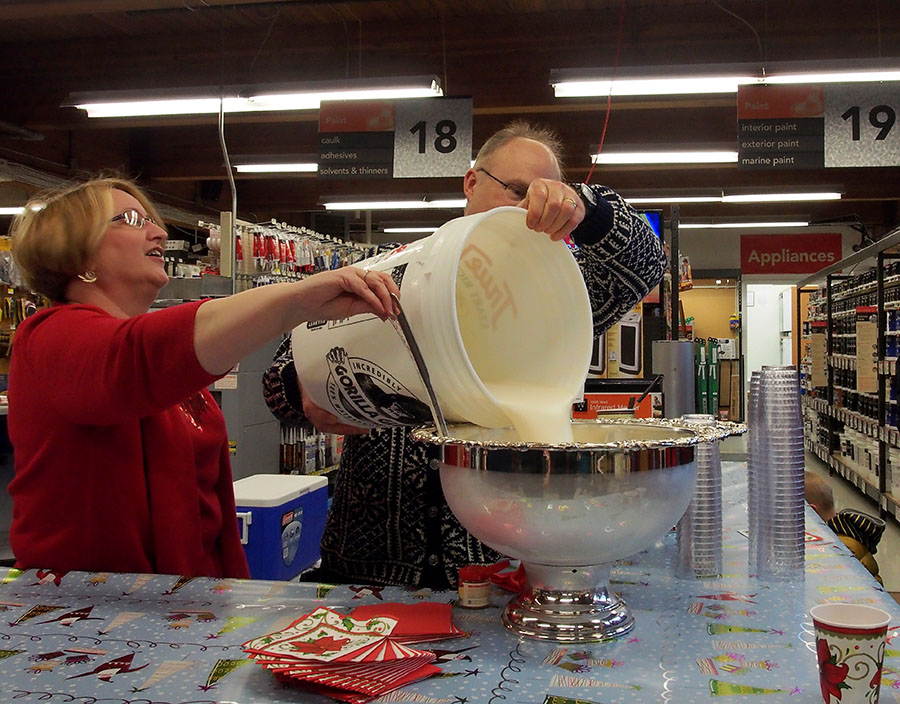 Monday night was a Community Concert where 16 different groups or individuals played a musical instrument and/or sang holiday songs.  To see that many people offer to share their time and talents was heartwarming enough, and most of the performances were extremely good.  Our favorite was a duet by Lila and Grant singing an old Norwegian carol, along with the story of how they learned the song and met as youngsters in Minnesota.

Saturday was our day for the Christmas bird count for the Audubon Society, and I joined a valiant group of volunteers on a cold, rainy, windy day – not the best for seeing a lot of birds.  The scoters are plentiful in the harbor and we’re starting to see some long-tailed ducks, and I’ve been assured that many more are on their way here for the winter soon.

I was on a little team with a local bird expert currently working on her PhD and a retired Alaska State wildlife biologist – which was fantastic.  We counted the trumpeter swans, buffleheads, mergansers, loons, pine siskins, etc. I got a nice tour of some good hiking and bird watching spots on the island and I learned a lot from them both – well worth enduring the cold wet weather!

We heard our names on the local radio station (KFSK.org) today announcing that we won the Christmas Light Contest in the “boat” category.  There was only one other entry in our category, but a win is still a win!  Jim gets all the credit – he’s the one who does such a nice job putting lights all around the boat and a big red ribbon on the bow.

We wish you all a very Merry Christmas, or as the Norwegians say “God Jul”! 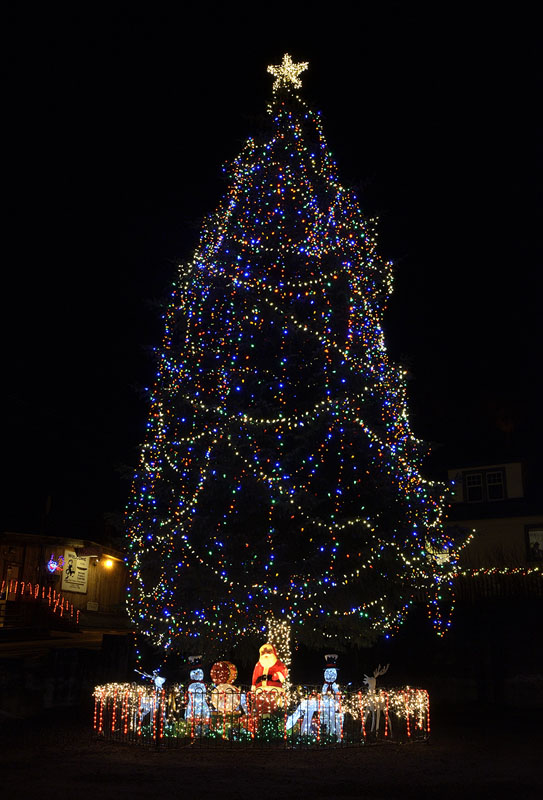