We headed into Juneau to hit the big box stores for some final winter provisioning, and we were hoping to make it a short stop.  We commando-shopped and got all our errands done in one day, but the weather forecast changed and we were stuck for at least a week.  The fates were smiling on us though – we saw a DeFever 49 and as we were standing on the dock admiring it, the owner came out to investigate the strange people who were staring at her boat!  When we explained that we were fellow DeFever 49 owners she said they knew all about us since they’ve been following the blog for several years.  Glasses of wine and long conversations followed, and our new friend Brooke showed us some nice hiking trails around Juneau, and took us for a hike with her two dogs. 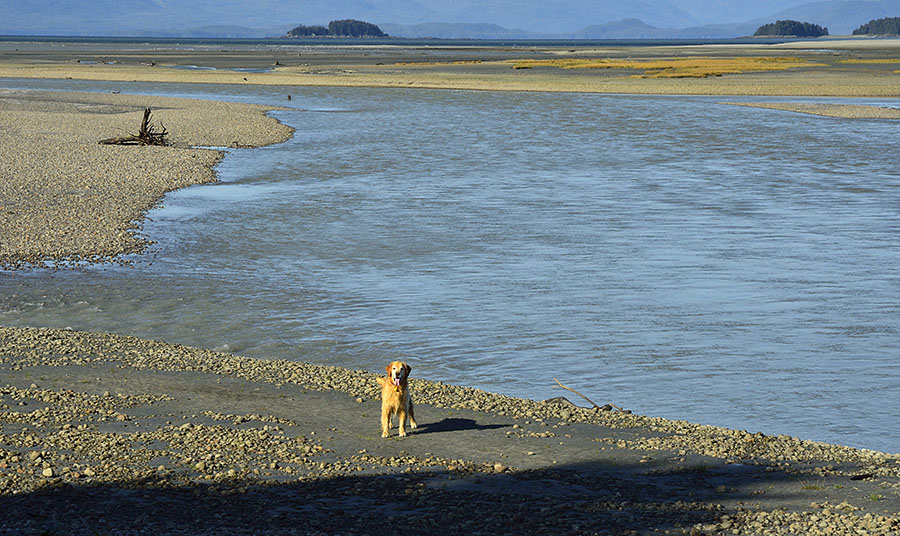 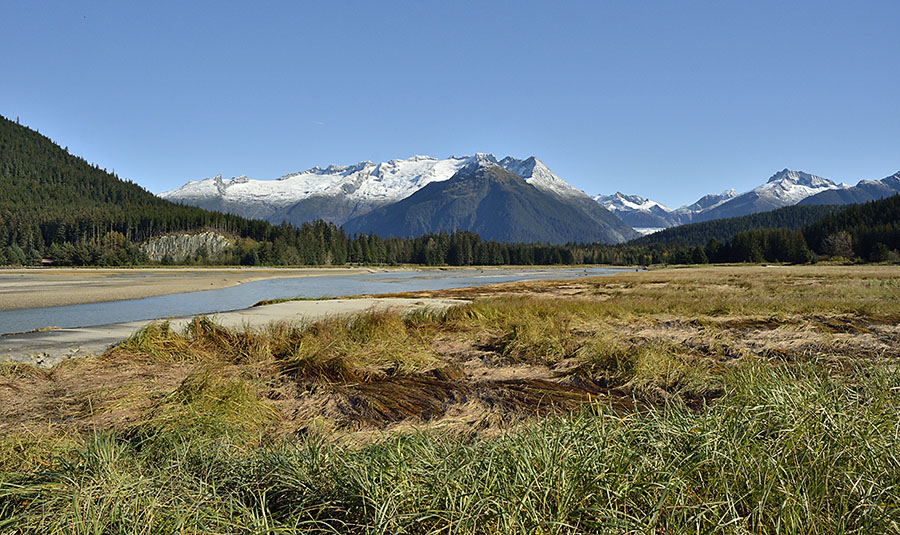 It was so nice to get some good local knowledge about Juneau, though you really need a car to get to a lot of the hiking trails north of town.  Note that there are only about 40 miles of road in Juneau – you can drive locally, but you can’t leave.  Like most of SE Alaska, you can only get there by boat or plane.  Just for fun, we drove “out the Road” to the northern end since it was a glorious fall day. 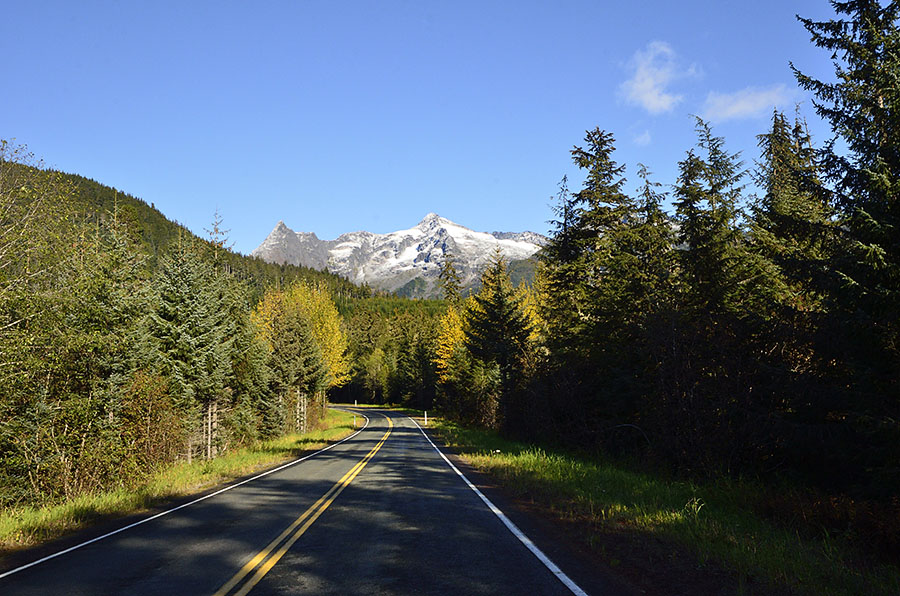 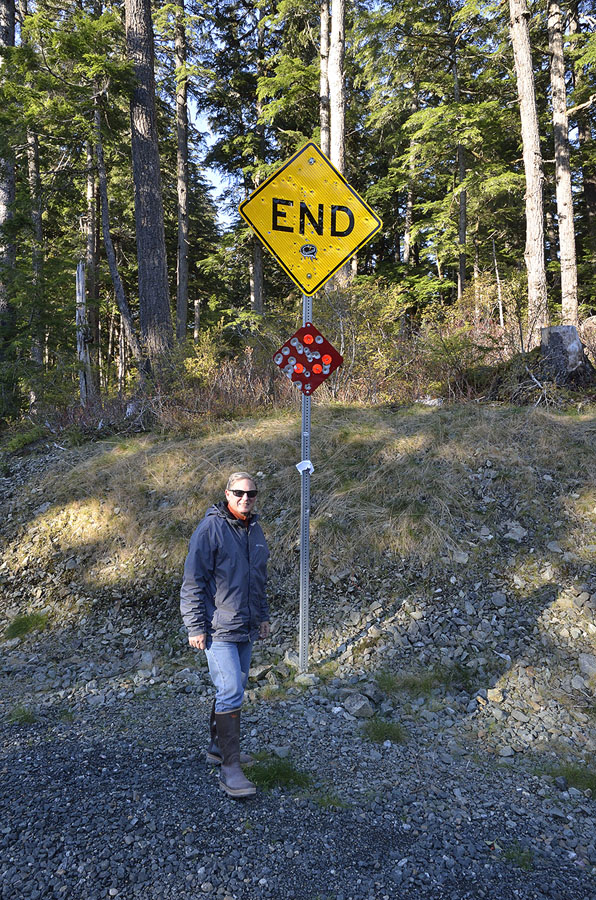 We ended up waiting 8 days for the weather to improve enough so we could leave, though we were hoping for a 2-day weather window to get back to Petersburg.  We saw a 1-day window and not much else on the horizon so we departed Juneau on October 7 at 0430.  It takes about 17 hours (depending on how much the current impacts us) to get to Petersburg.  The good news is that we had a nearly full moon to give us some light to help spot bergy bits and other obstacles in the dark; the bad news is that a full moon means bigger tides and stronger currents, which can really rip through Petersburg harbor.

As the sun was rising we saw a pod of orcas; we haven’t seen many this season compared to BC. 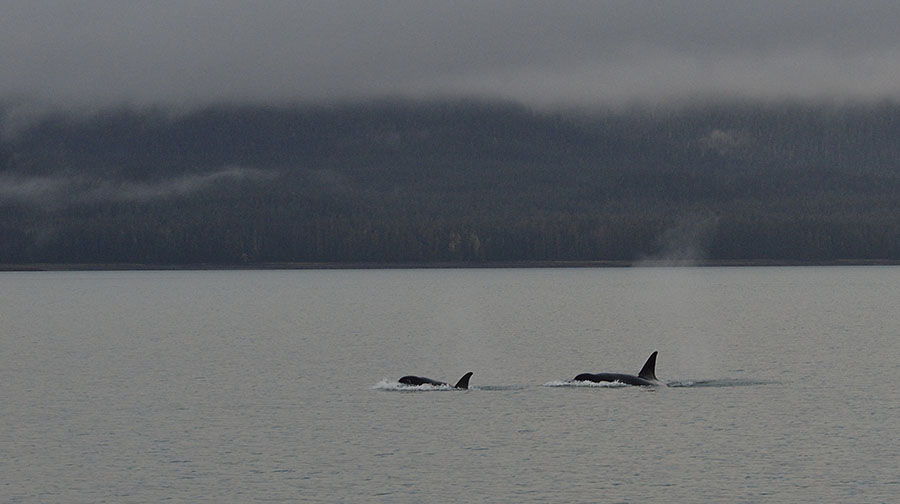 A little farther on we saw a large pod of bigger whales – humpbacks or possibly minkes – they were at a distance, but there were about 14 of them.  The mountains were particularly pretty since the heavy rain we had over the past few days left a nice dusting of fresh snow on the mountain tops, bringing thoughts of skiing. Juneau has a ski hill that we hope to check out this winter.

We savored the last day of cruising for the season – appreciating the whales and birds and evergreens and mountains just a little more than usual.  We had sunny weather, flat seas and a smooth ride.  Near sunset some rain clouds caught on the mountains and we saw some beautiful late day light reflected and refracted through the clouds, plus a number of rainbows. 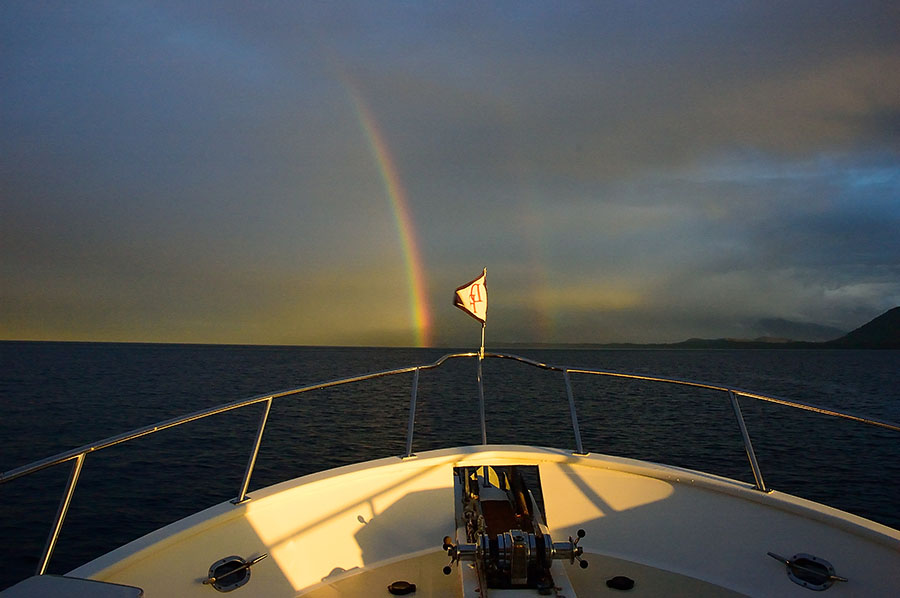 We arrived in Petersburg in the dark with the current in the Narrows ripping at full flood, but we got into our slip and secured ADVENTURES for the winter without any problems.  It’s bittersweet to see the cruising season end, but exciting to settle into the community of Petersburg.
Our first real taste of the town was meeting some of the other liveaboards in the harbor, starting to listen to the local radio station (a font of information about events around town), and the school Fall band concerts.  We both played musical instruments when we were youngsters, and we believe in supporting the band.  The concerts were well done, and we particularly appreciated the Beginner Band.  In the 6th grade here, every student is required to play a musical instrument and play in the Beginner Band; the student can choose to continue or quit after that year.  The director gave a great explanation of where these students were in their musical development after just 6 weeks with their instruments, and we enjoyed their performance. 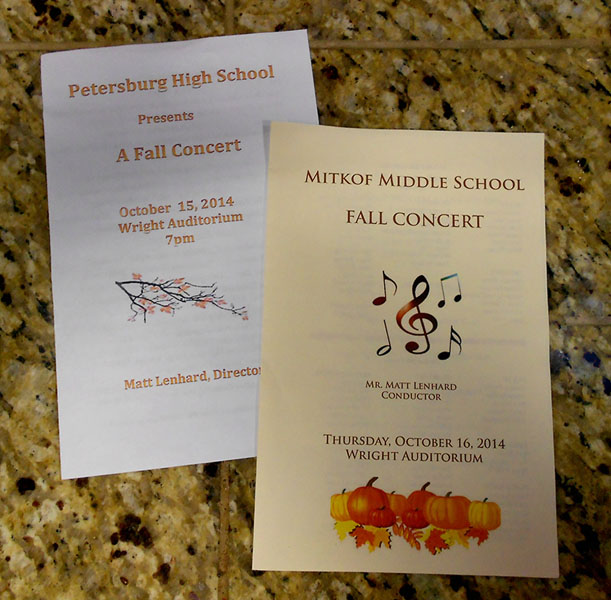 I’ve joined the Sons of Norway since they are a major hub of social activity in town, and Jim joined the Elks.  We got our library cards and P.O. Box, and we’re starting to find our way around and make friends.