147 years ago the U.S. purchased Alaska from Russia for the price of $7.2 million dollars, and the formal transfer took place at Fort Sitka on this day.  Happy Alaska Day!  It only took 92 years after that for Alaska to become the 49th state, proving that glaciers aren’t the only things that move very slowly.

The last post talked about our terrific too-short two days in Denali National Park, and this post will wrap up the last bit of our week long side trip to see different parts of Alaska. 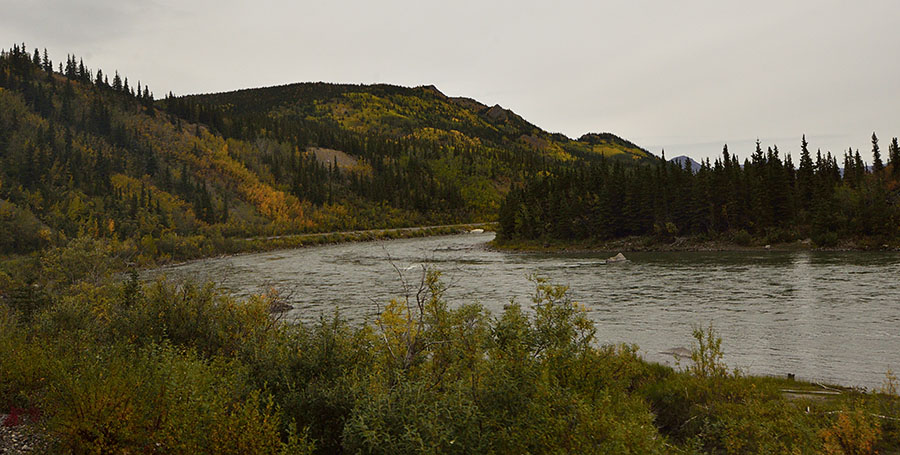 It was strange to see so much fall color in the first few days of September, but fall is a very short season in the interior.  “So much fall color” is relative since the majority of the trees are evergreens rather than deciduous.

We took the Alaska Railroad from Denali back down to Anchorage in a “dome car” with panoramic views from every seat.  The train runs at a slower speed – the whole point is to enjoy the ride, and it’s fantastic that the train stops for wildlife sightings.  We spotted a moose cow and calf in a field, and the train not only stopped but it actually backed up to give all the cars a better view. 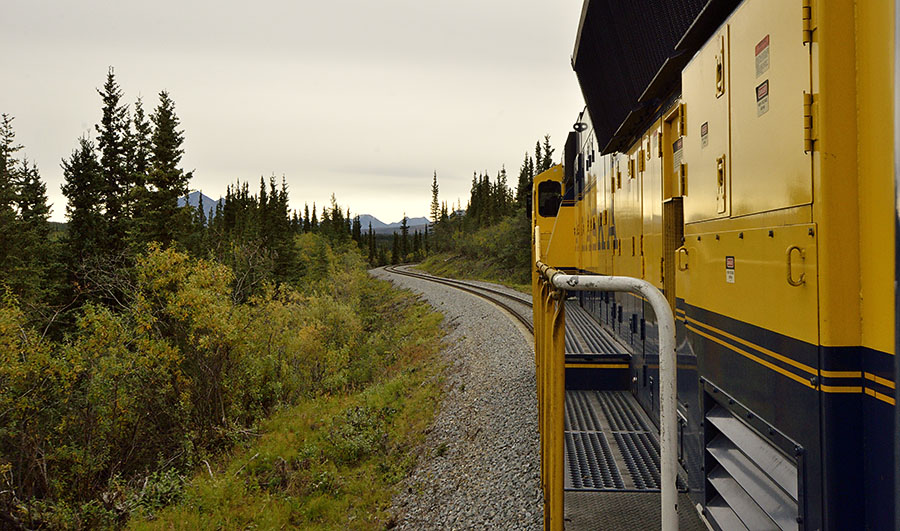 We loved the Alaska Railroad, but we discovered that some trains have dome cars provided by the Alaska RR, and some trains have cars provided by the cruise lines.  We definitely prefer the Alaska RR cars – the commentary was excellent and informative; the cruise ship version was more “rah rah”, pushing fancy drinks from the bar and mindless “entertainment” more than actual information.  We’ll be more careful when making arrangements in the future.

We took an extra day to explore Anchorage – Alaska’s largest city in terms of population – about 300,000.  We wanted to learn more about the infamous 1964 Good Friday earthquake, the second most powerful earthquake ever recorded at 9.2 on the Richter Scale.  The devastation in the city was tremendous, though there was also significant damage and impact for 200 miles around.  In areas to the south the ground fell, while an area near Kodiak Island was permanently raised about 30′, and the port of Valdez was destroyed by an underwater landslide.  Tsunamis from this quake impacted Hawaii and Japan, as well as local towns.  It’s a reminder that Alaska is a geologically active place, and although we haven’t actually felt any earthquakes this summer we did experience one when we were in Haines.  The people in town felt the overnight rumbling, but since we float we didn’t notice until the next morning when our cell phones stopped working.  The quake was centered about 100 miles to the west, and it severed a fiber optic communications cable that serves the northern part of Juneau, Haines and Skagway.  It’s a good thing we’re immune to tsunamis down here in Petersburg! 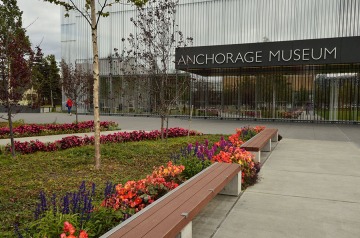 We heard good things about the Anchorage Museum so we set aside some hours to explore it.  The museum was currently hosting an exhibit called “Gyre” about the horrific problem of plastic trash in our oceans.  It was a very compelling exhibit, telling the heartbreaking story of humanity’s carelessness and callousness in very innovative and even beautiful ways. 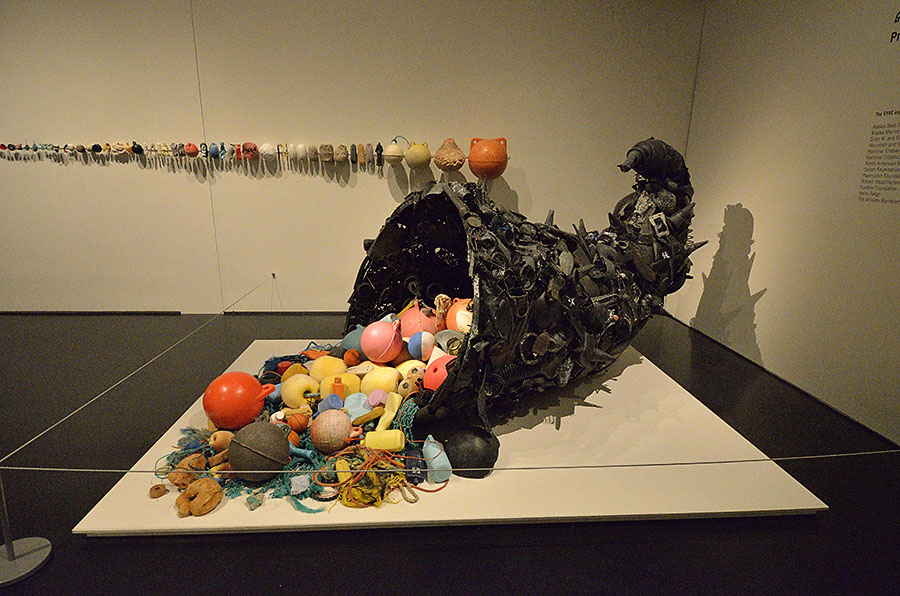 We wallowed in native culture, amazed at the variety of creations from all the different tribes, particularly those in the northern and interior regions.  In British Columbia and SE Alaska we only see things from the Tlingit, Haida, and Tsimshian tribes so we appreciated their extensive collection.  The museum also had an exhibit of Art of the North in a variety of media – most excellent.  My favorite was a small set of photographs about the Kobuk Valley National Park – an arctic desert 25 miles north of the Arctic Circle.  I love that kind of stark, dramatic landscape and now I have to figure out how to visit such an inaccessible place!

We discovered the Imaginarium on the lower level, unfortunately a little too close to closing time, but we still managed to find some neat science-y things to play with.  You’re never too old to have a happy childhood. 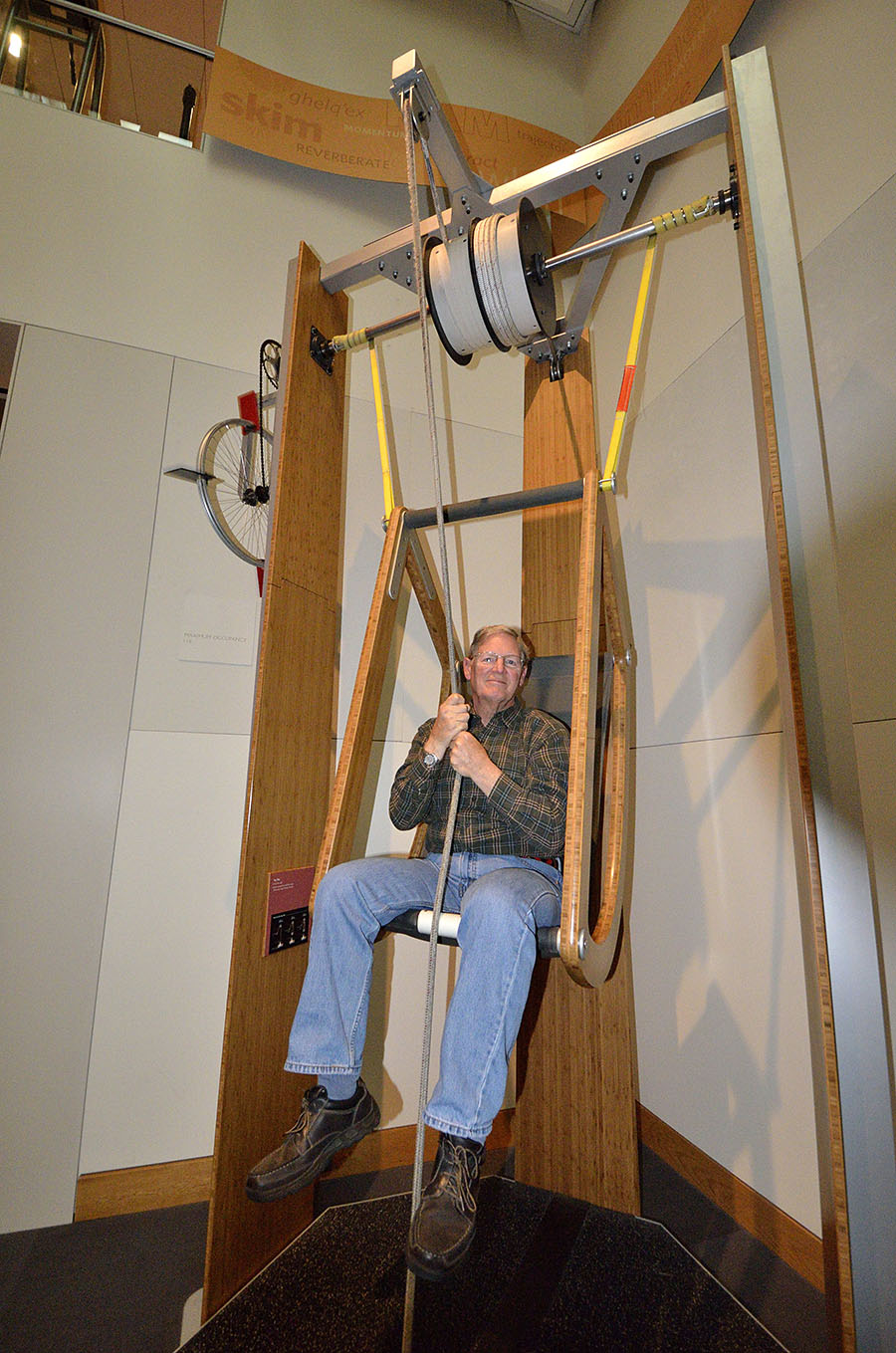 To wrap it all up, we got a kick out of the funky statues just outside of the museum – art meets local wildlife. 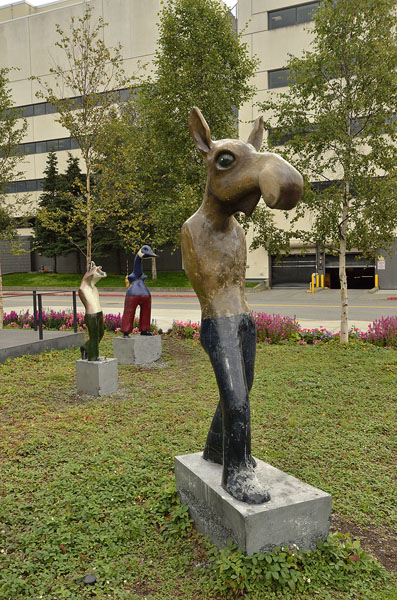 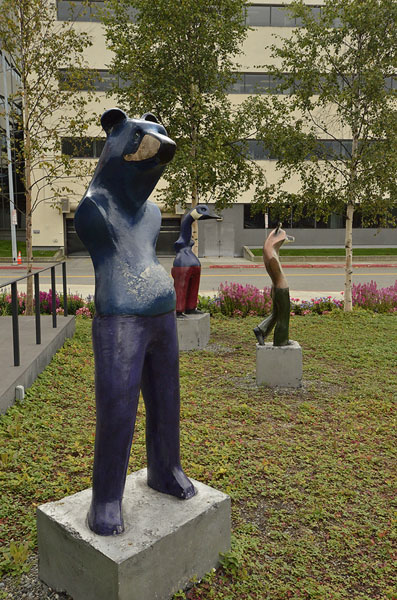