If you remember from my last post we were in the far northeast corner of Alaska’s panhandle in the town of Haines, and it’s one of only two places in SE Alaska (the panhandle) with a road that goes anywhere.  All the other towns are land-locked either by impassable mountains or because they’re on an island so cars have to be brought in by ferry.

The road from Haines goes into Canada, and if you turn east on the Alaskan Highway you can pass through Whitehorse (Canada) and back into Alaska to the town of Skagway.  It’s a 350 mile trip by road… or 16 miles by water.  Thankfully the big Alaska State Ferry runs between the two towns to carry cars, trucks and RVs.

This is a nice 3-D map from the National Park Service showing the steep mountains leading up from the port of Skagway.  This is Klondike Gold Rush country – the primary point where the stampeders came to cross the mountains to get to the Klondike River in Canada to seek their fortunes.  In this map you can see the two trail options used by the stampeders – the Chilkoot Trail (steeper but shorter) is on the left and the White Pass Trail is on the right.  The Gold Rush started around 1898 and only lasted a couple of years, and because of all the excitement some investors built a railroad along the White Pass Trail, though it was completed after the Gold Rush died down. 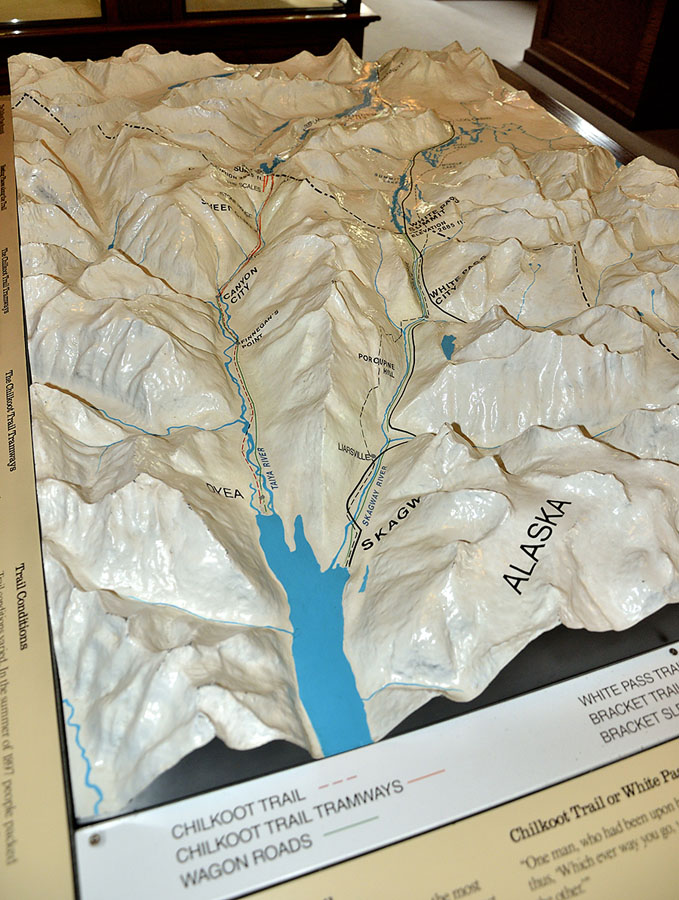 The railroad still exists, though it’s now used only to carry tourists from Skagway up to the Canadian border at the top of White Pass – a beautiful ride through the mountains. 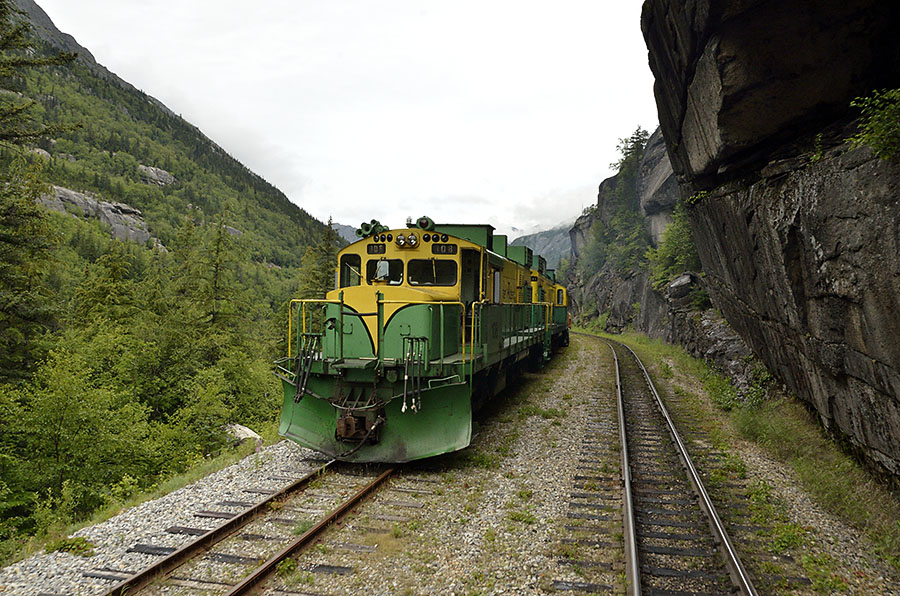 Notice the small snow plow on the front of the engine.  This part of SE Alaska gets a lot of snow in the winter, and they need a much bigger plow to really clear the tracks… like this rotary plow. 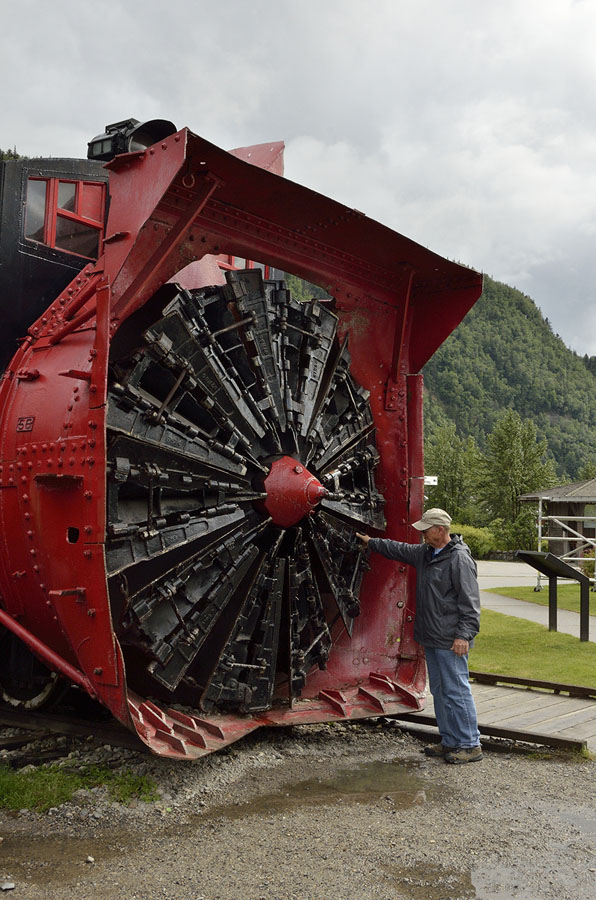 Skagway is very touristy since it hosts up to 4 massive cruise ships per day, but the history is nicely preserved in town and the National Park Service does a great job with some interpretive movies and walking tours. 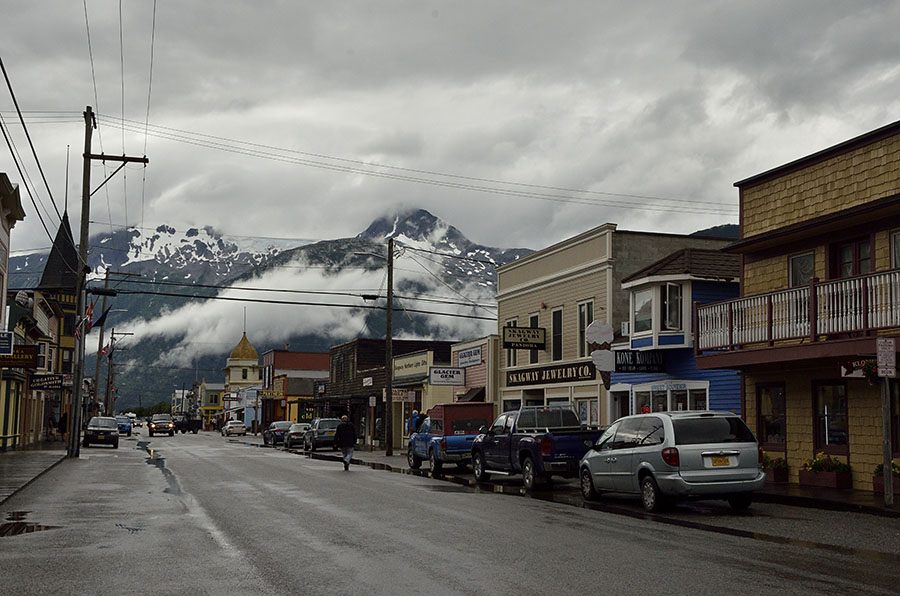 Too many cruise ship crowds wore us down a bit and we had some mail on the way so we headed back down to nearby Haines.  The timing worked out well since the SE Alaska State Fair is hosted in Haines and would be starting in a few days, plus we still had a few Haines highlights to see, such as the Hammer Museum.  Yes, a museum devoted to hammers.  You can’t make this stuff up. 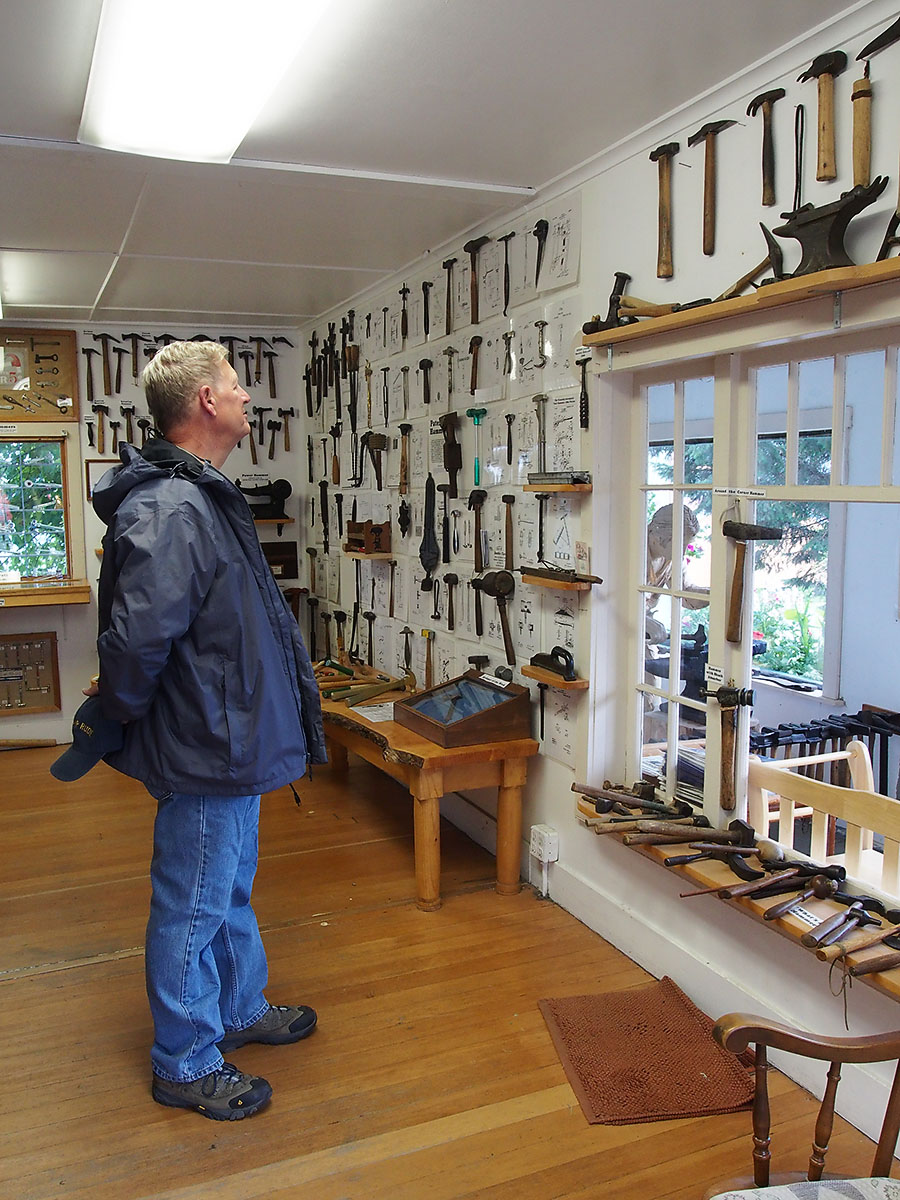 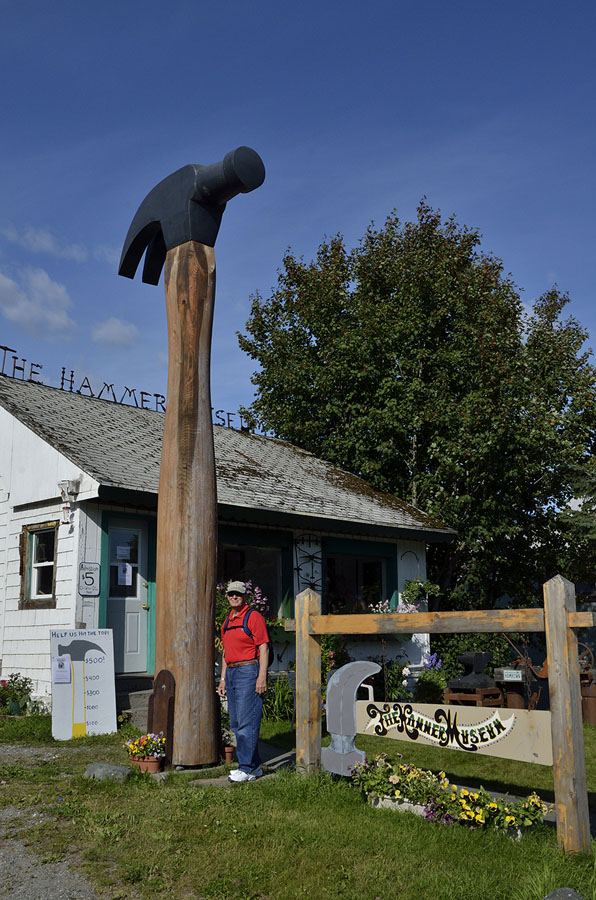 We had to check out the totem pole at the town’s library, with a bookworm, a man holding the “box of knowledge”, and if you look very closely at the guy above holding a book – the book’s title is “Totem Carving for Dummies”. 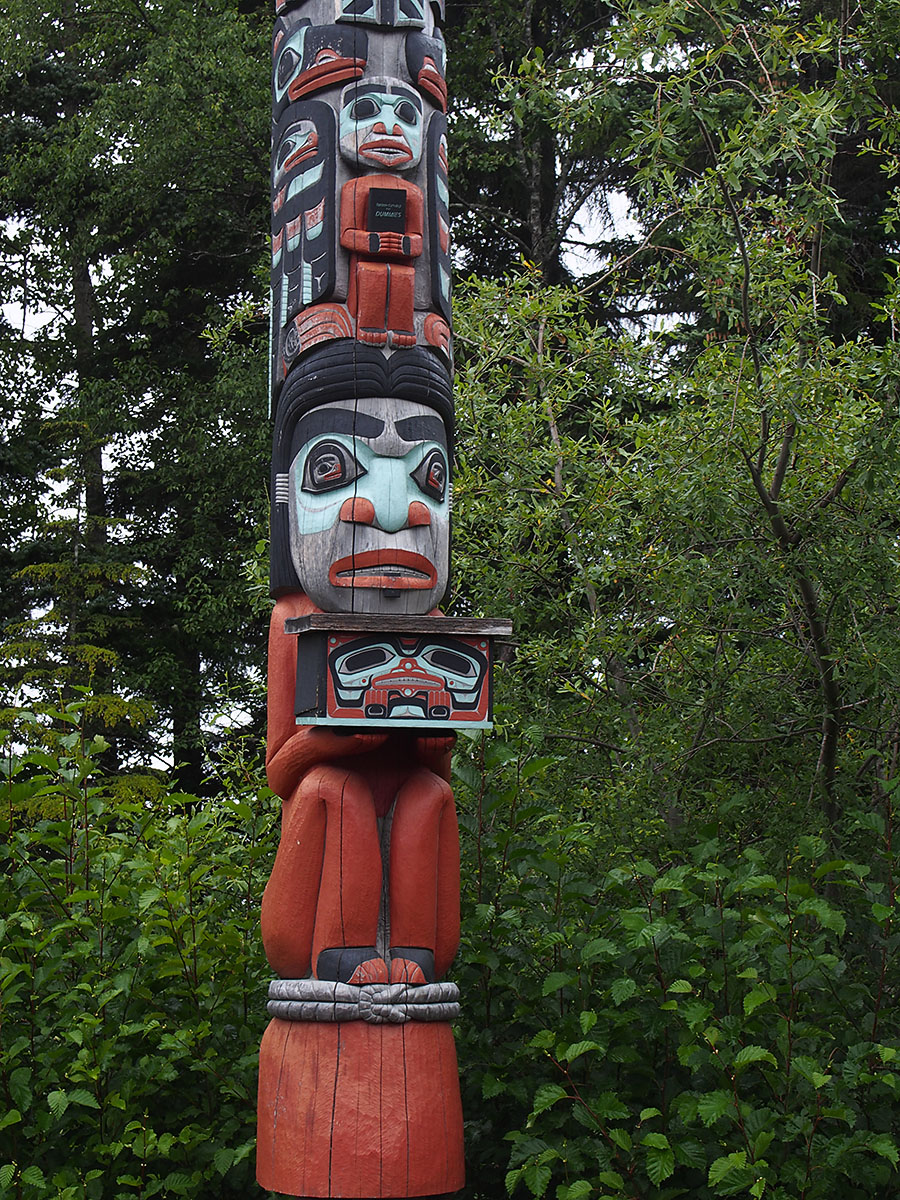 Haines is known for the largest concentration of bald eagles anywhere in the world, particularly over the winter.  About 4000 eagles congregate around the Chilkat River, and there is an Eagle Festival in the Fall and a lot of serious birders coming at other times of the year to see them. 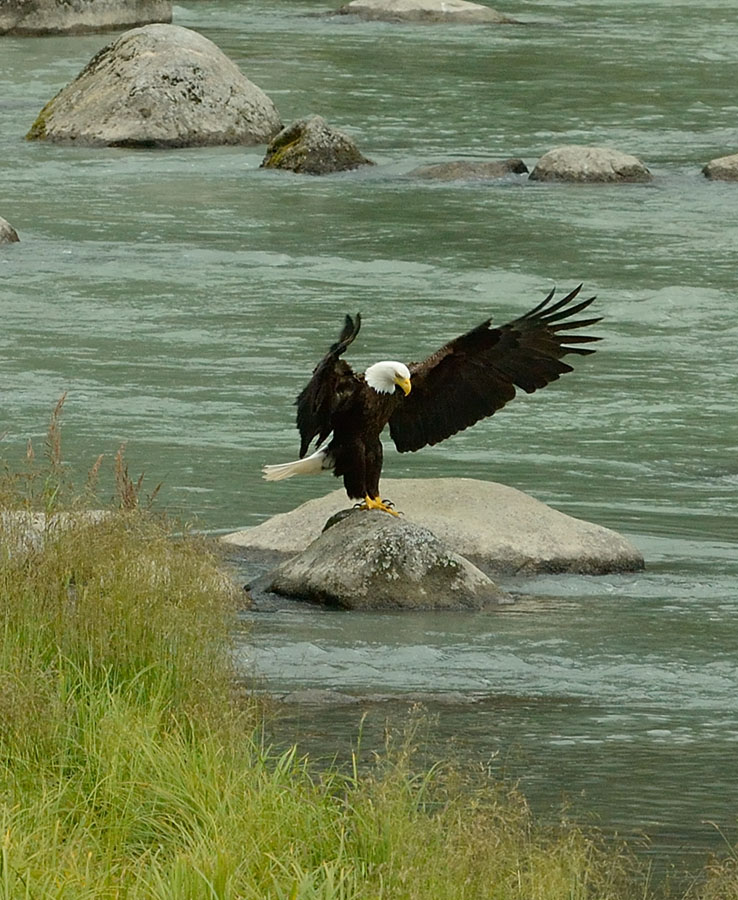 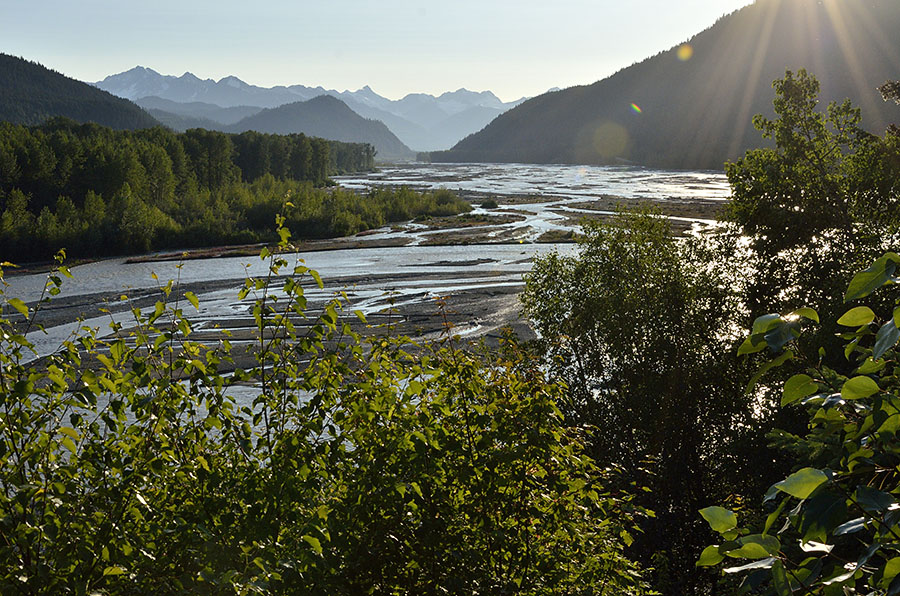 We capped off a nice second visit to Haines with a day at the SE Alaska State Fair.  It was much smaller than we expected, but the various arts on display were excellent, and the flowers and vegetables were huge (thanks to all the rain and long hours of sunshine).  We had a great talk with the gal from the National Weather Service – near and dear to a boater’s heart, and we enjoyed watching these kids duke it out. 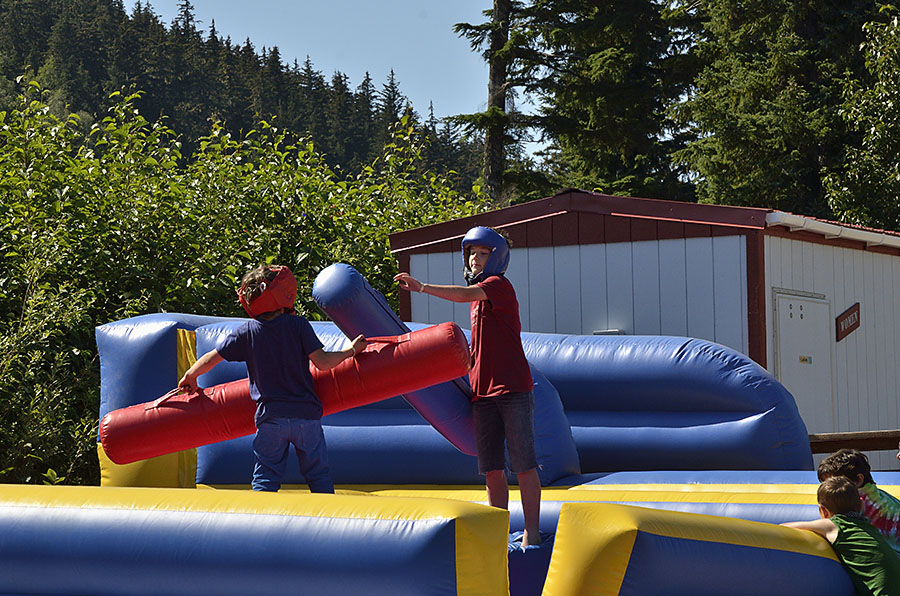 We really need to get some of these helmets and padded battering rams for the boat… a healthy way to deal with living in close quarters, I think.

There were bands and performers playing all through the day and well into the evening, and many people came from other parts of SE Alaska to cheer for their favorite entertainers.  Notice the backdrop on the Fair’s stage – a sockeye salmon in spawning colors.  Around here, it’s all about the salmon. 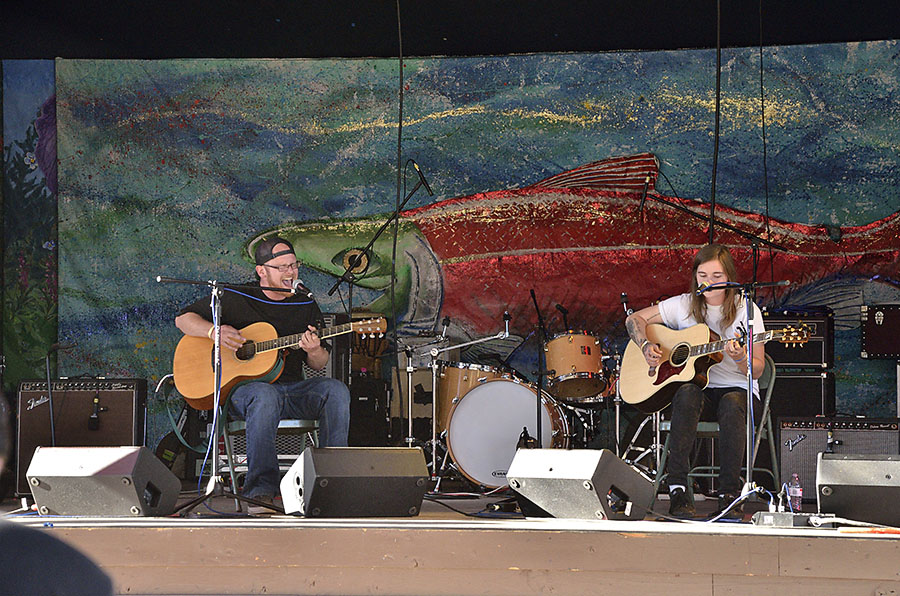