Just south of Tracy Arm fjord is another arm off Holkham Bay called Endicott Arm.  Among the features in this long arm is the aptly named Ford’s Terror – a very narrow, steep fjord with an entrance that’s a bit challenging.  As you can see on the chart, there is a very tight pinch point full of rocks (indicated by asterisks).  This chart is the most detailed available for the fjord, and note that depths are in fathoms (6′ = 1 fathom). 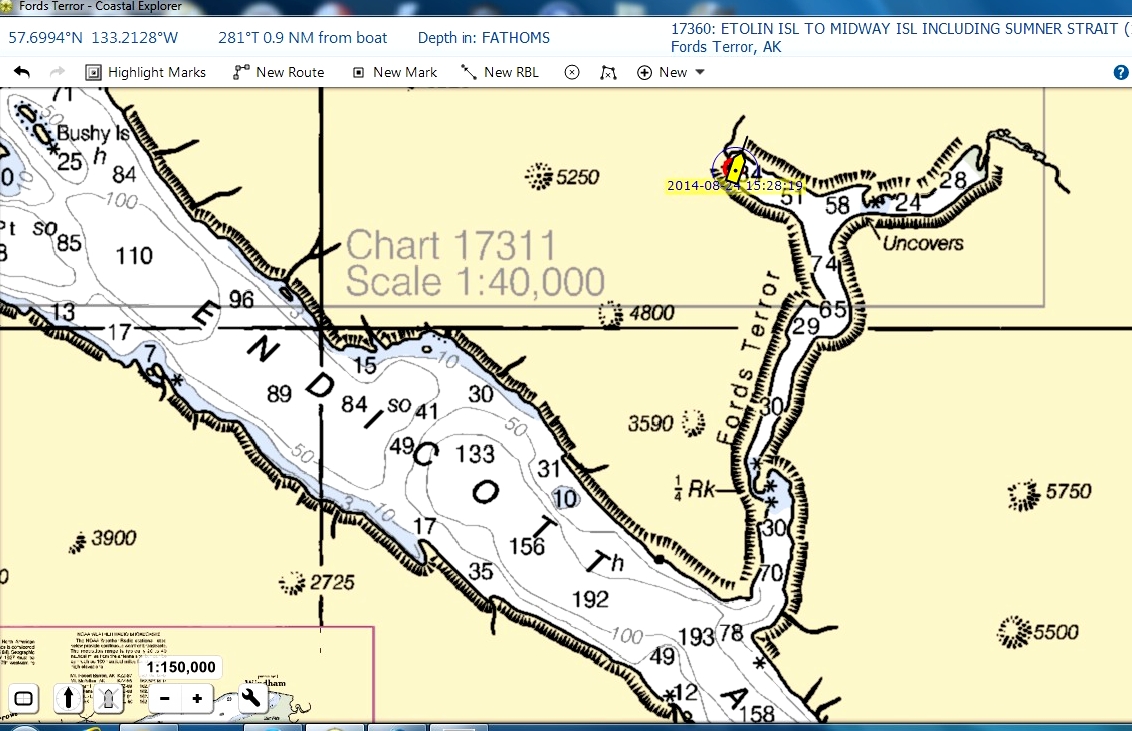 In addition to the poor chart and rocks, that pinch point becomes a nasty rapid when the tidal current is running – people come to surf on the standing waves.  The night before we made the transit I was wondering why we were going to go in there (“Robin’s terror!”), but other people have done it successfully and we had some points of reference from the blog of a very respected training captain from Seattle. 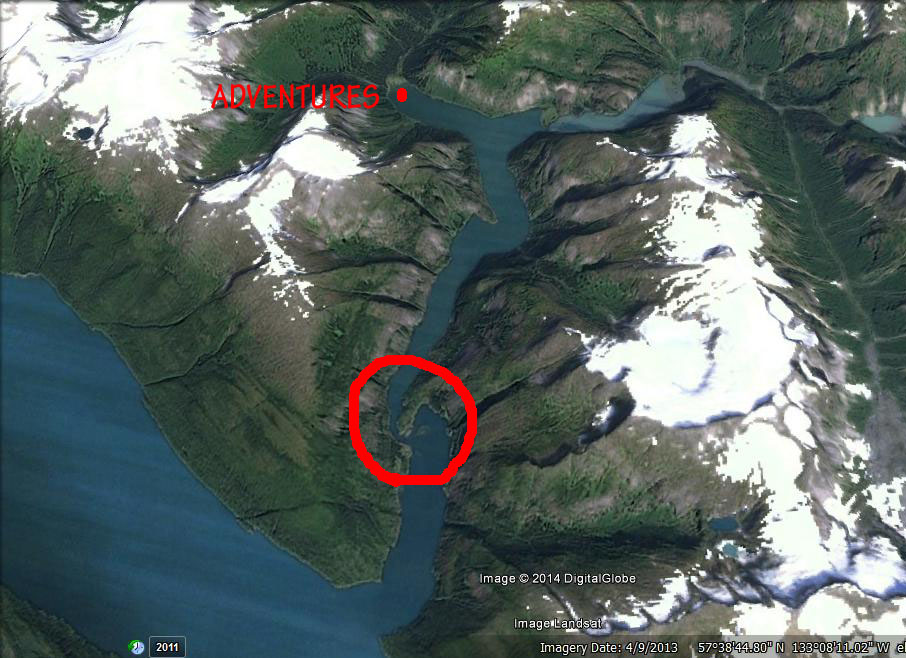 We cruised up to the entrance keeping an eye on the time so we would arrive at slack current after high tide, cruised close to the big double-waterfall, and turned to look for the rock reefs that line each side of the narrow channel.  We called a “Securitay” on the radio in case any boats were trying to exit – there is room for only one boat in the pinch and no visibility due to the blind corner.  Fortunately I could see the rock reefs under the water pretty well, but we had to stop the boat and nudge a chunk of glacier ice out of the way in the narrow part.  After some nervous moments we made it through and began to appreciate why this place is so special.  The fjord walls are steep and the channel is close – it’s so dramatic and gorgeous!  I think it’s one of the most beautiful places I’ve ever been. 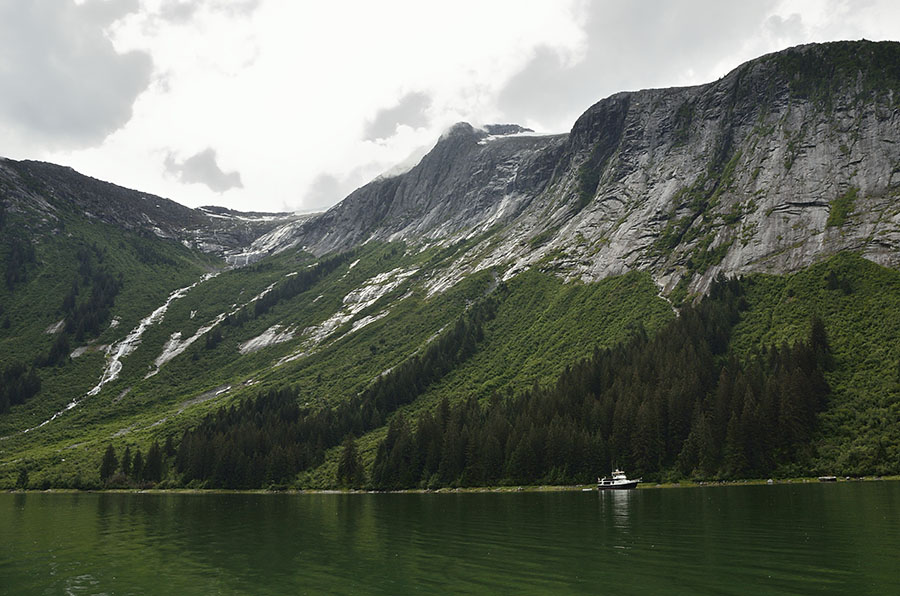 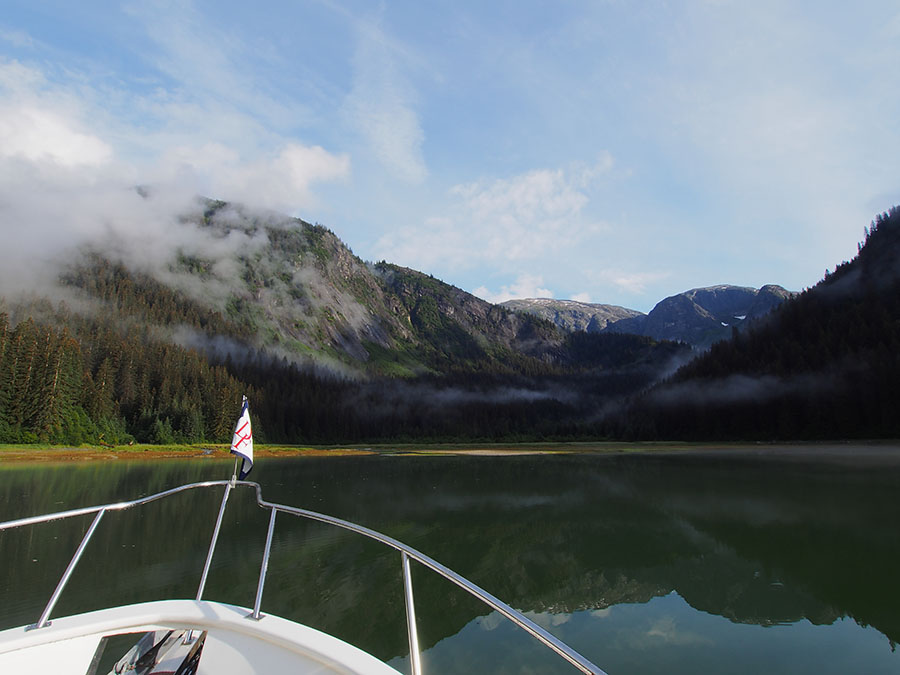 The best part is that we had the fjord all to ourselves for two glorious nights.  We just sat and soaked in the beauty, I kayaked, and we explored in the dinghy.  In addition to several big flashy waterfalls, we watched a mother black bear and her two cubs prowling the meadow in front of the bow all day long. 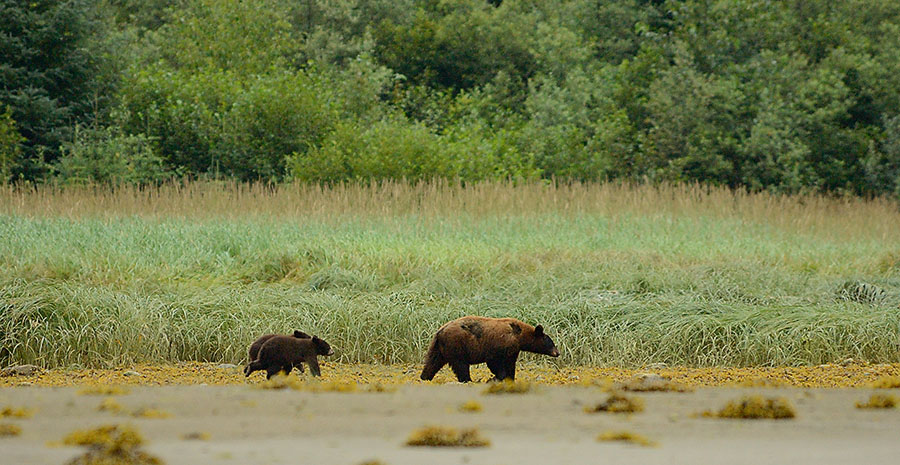 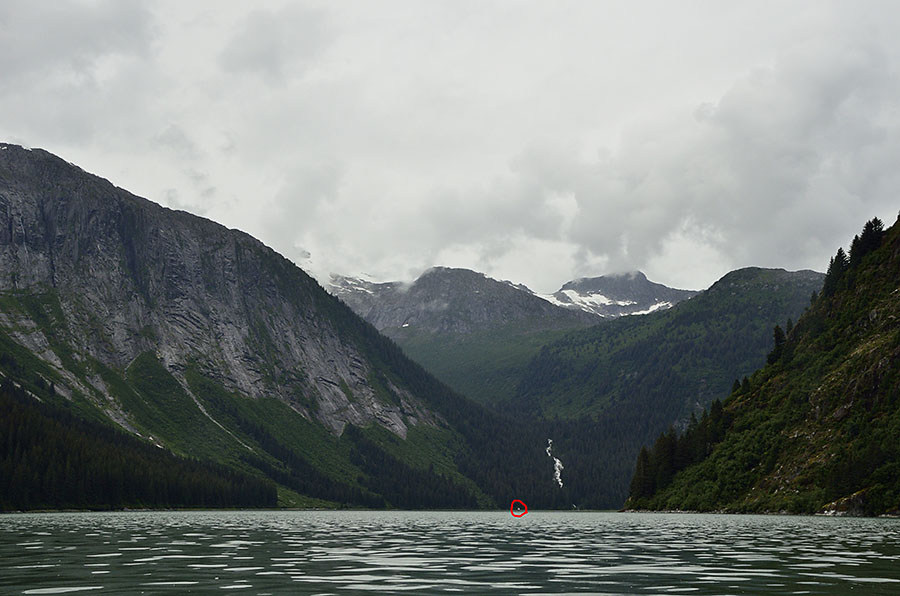 See the little red circle in the photo above?  That’s ADVENTURES anchored in the west arm of the fjord.

When we took the dink to explore we decided to head out the narrow channel to get some better bearings for running the entrance, and we found a huge chunk of iceberg probably aground, though it was so big we couldn’t tell for certain. 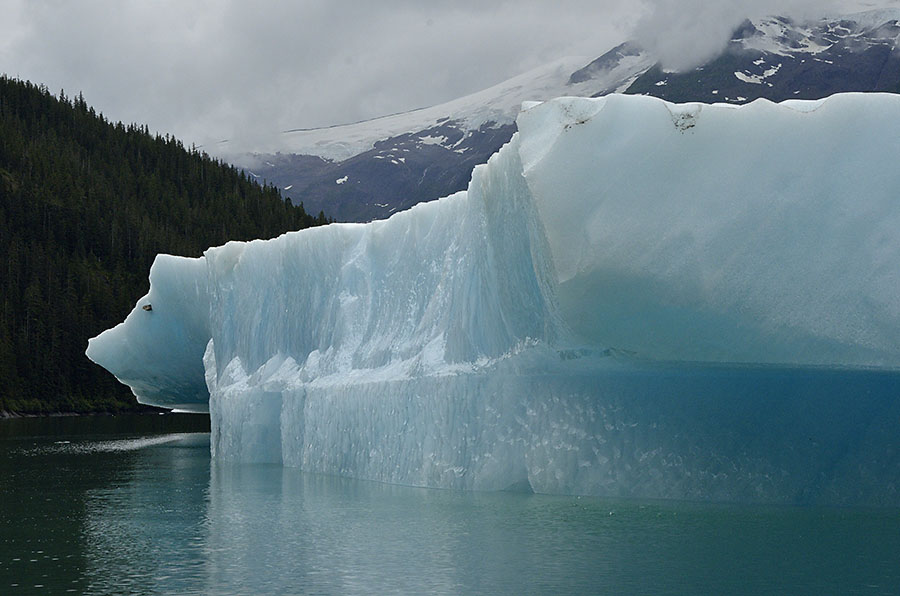 Note the small rock embedded in the ice on the far left.  Glaciers pick up all kinds of things and transport them great distances. 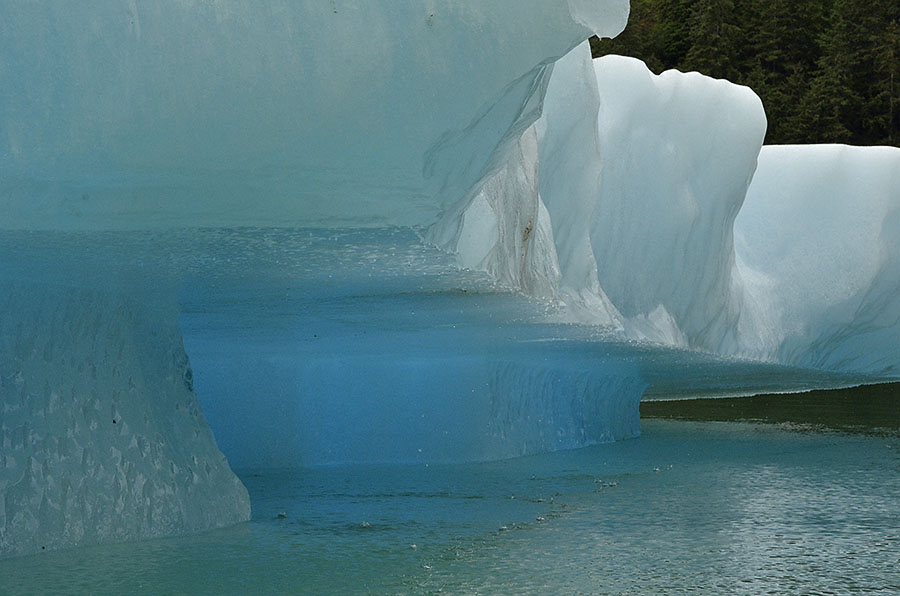 The blue glow was eerie, and the color almost fake! 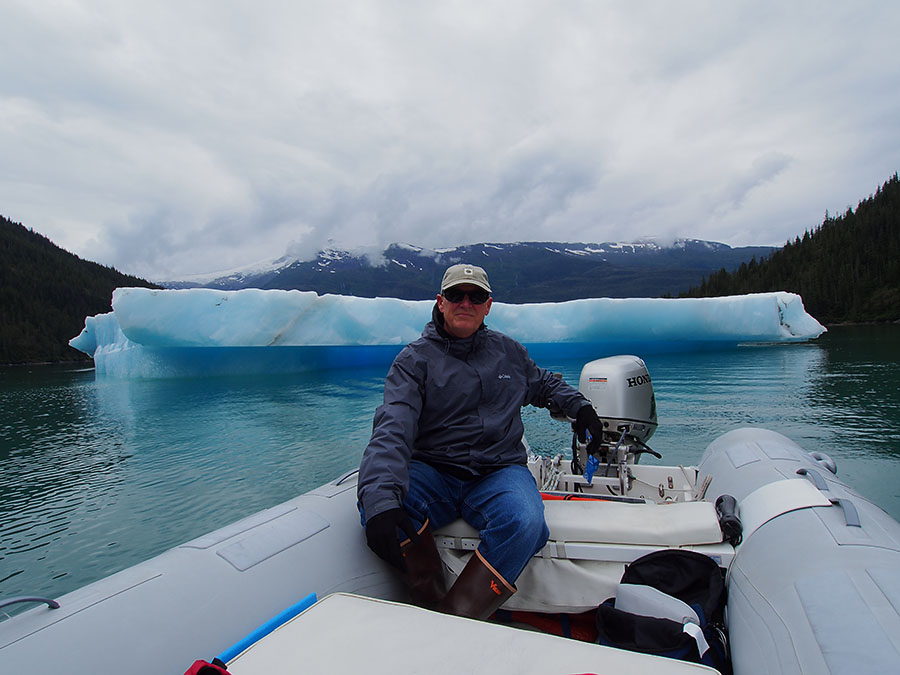 So why is such a magnificent place named “Ford’s Terror”?  Apparently a fellow named Ford was crew on a survey ship around 1899, and he was either sent in to explore the fjord or he decided to go in to hunt, but the bottom line is that he and his row boat were trapped inside by the vicious current until the tide turned and it scared him more than a little.  The trip was well worth the “terror”, and we will definitely return again.

After we reluctantly left the fjord we headed farther up Endicott Arm to see the Dawes glacier, but we weren’t able to get very close because the water was choked with brash ice.  It was a misty, gloomy day, but at least we could see the glacier from a distance and it had a great moody feeling from the weather.  We got closer than the photo shows, but not much. 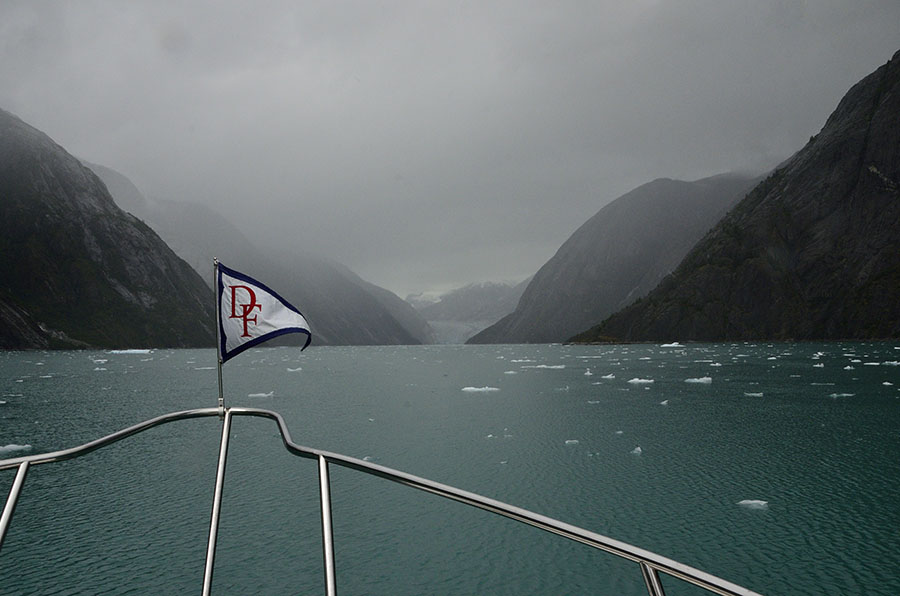 We cruised back down the Arm to anchor, and I loved how the blue bergy bits stood out against the gray misty mountains. 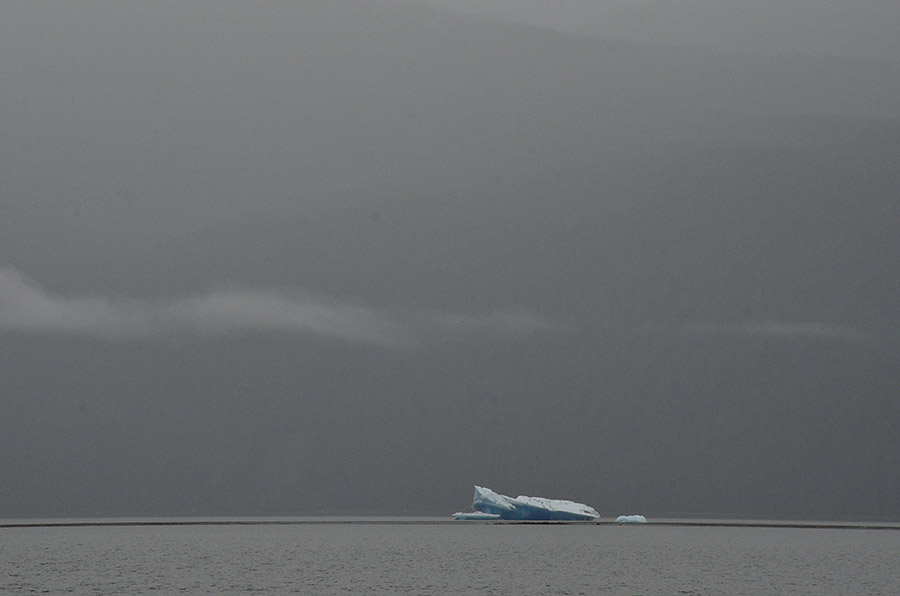