We took care of a lot of chores and little repairs in Hoonah and we were ready to start exploring places farther east and north.  Since we would be in the vicinity of Juneau (capital of Alaska, population 32,000) we decided to stop for a few days to visit the big box stores (Costco, Fred Meyer, Walmart, Home Depot) – the only ones in all of SE Alaska.  It was time to re-stock the freezers and pantry for the next few months of cruising so we viewed this primarily as a “business trip”.

As we rounded the lighthouse at Point Retreat to head down to Auke Bay, Juneau we got a nice push from the flooding tide.  Approaching a narrowing of the channel we saw a few small boats and a big private yacht just drifting.  We slowed down, and were very excited to see a large group of whales – at least a dozen, blowing and diving.  We put the engines in neutral to drift and watch them.  At one point they all dove deep – when you see their tails, they’re diving deep and are usually out of sight for a while.  We waited patiently expecting them to start blowing again but instead they all burst up out of the water with mouths agape – not far from us.

This behavior is called “bubble net feeding”, where the whales dive down near a school of bait fish and blow a large ring of bubbles to contain the fish.  Then the whales swim up through the middle of their “net” ring and gobble up as much as they can.  You can see how distended the one whale’s throat is in the photo above.  The whale uses its tongue to push the excess water out of its mouth, using its baleen as a filter to trap the food but allow the water to go out.

This was a great show!  The whales blew and swam on the surface for a few minutes and then dove again.  The big question was – where would they appear?  Sometimes the seagulls flying overhead would give the first hint, but not always.  We were scanning the horizon and I had the big telephoto lens ready… and the whales came bursting up right next to ADVENTURES! 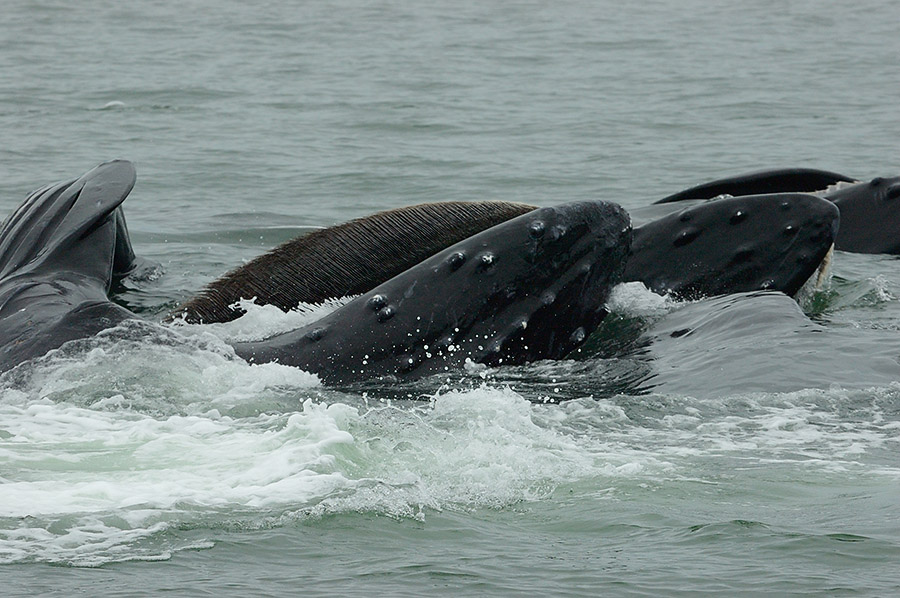 You can see the fine comb-like baleen in the photo above – it’s all gaping mouths because they were so close to us. 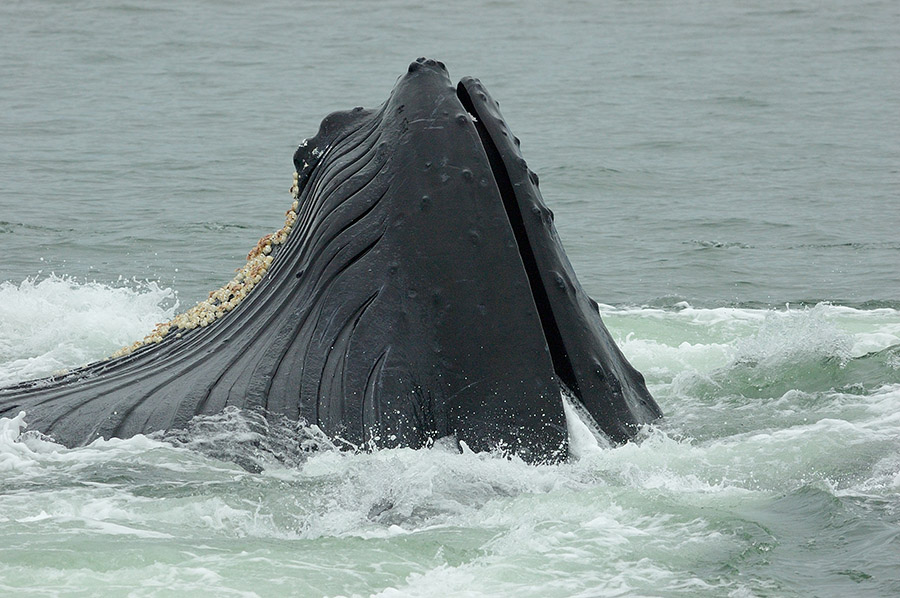 You can even see the barnacles on this whale’s throat.  Every time the whales came up we could hear people on the other boats in the vicinity cheering, oohing and aahing.  The show went on for about 20 minutes as we all tried to anticipate where they would appear next. 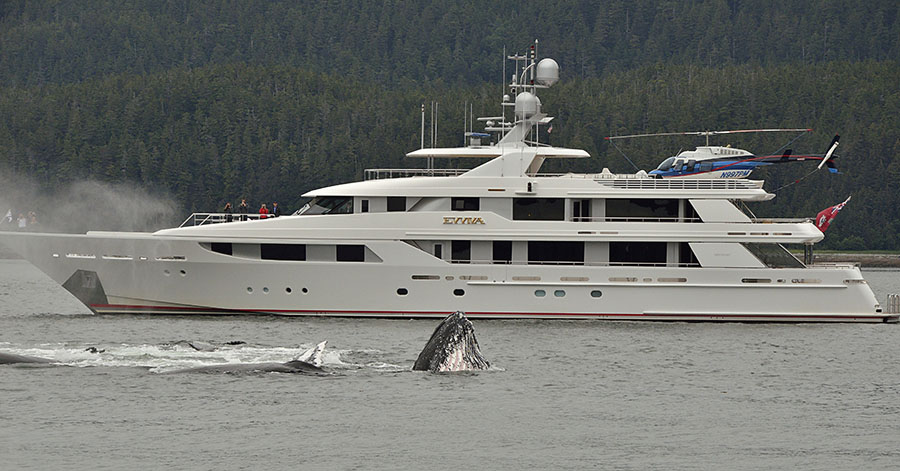 The whales started moving farther north and we were heading south, so we reluctantly put the engines back in gear and continued on to Juneau, still shaking from the adrenaline rush.

From the delights and thrills of the whales we headed into Auke Bay – a municipal marina on the north end of Juneau.  We could see part of the Mendenhall glacier on the way in, and we marveled at a glacier that’s only a 15 minute drive from downtown Juneau.  We called on the radio for a docking assignment and were told – just find a spot anywhere on C or D dock.  “Where are C and D docks?” we asked, explaining that we had never been here before.  “Oh, you’ll see some signs,” was the best help we could get, and as we came into the harbor we saw that it was choked with commercial fishing boats, guide boats, tourist boats, local boats… you name it.  We figured out which were the correct docks, but we had to dodge boats that were backing all the way out of fairways as they were looking for a spot to tie up… it was chaos.  Finally we noticed that a boat was getting ready to leave so we stood nearby to claim the only space we could squeeze into.  As I’m trying to back into the tight spot a local in a little boat starts yelling at us (we never figured out why), and a commercial fishing boat cruised right between us and the dock with very little room to spare.  Once we tied up we were rocked by boat wakes as traffic zoomed by far faster than the posted speed limit.  Welcome to The Big City.  We had to string almost every power cable we owned to the single power pole 120′ from where we were tied up.  But, we were here to restock provisions so we tried to ignore the rude Big City attitude.  It reminded me of Miami (not in a good way), but it was pretty in the early morning when it was quiet. 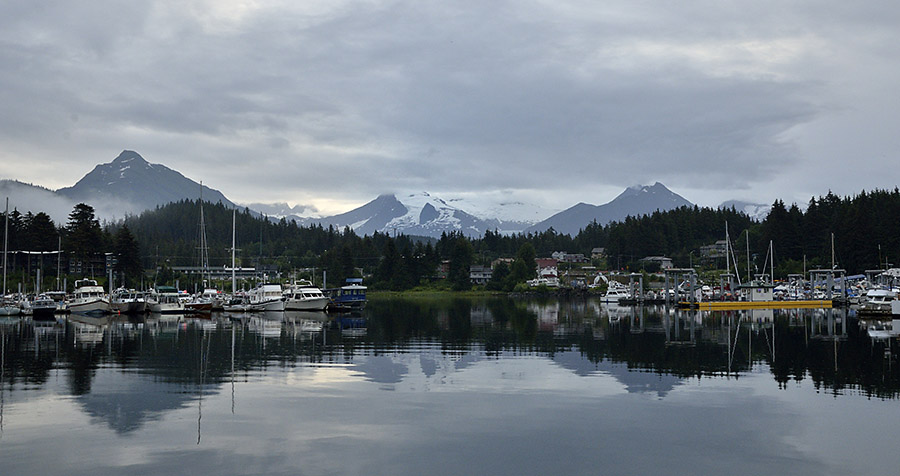 We rented a car for two days and ran through our lists, commando-shopping and hauling five large dock carts full of stuff down the steep ramp and out to the far hinterlands of the dock.  With shopping finished the first day we could take some time to explore a little, and the Mendenhall glacier was top on our list. 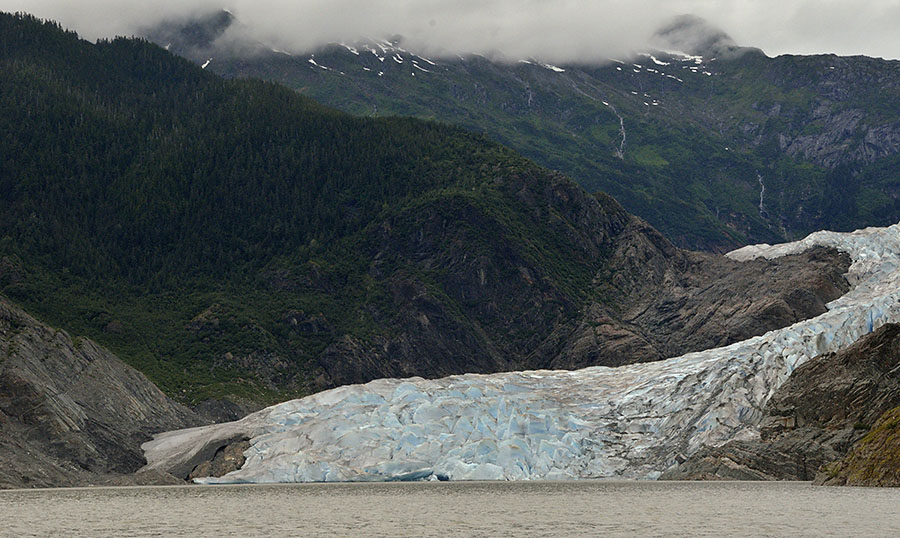 This glacier has been retreating very rapidly over the past years, and you can see the big patch of bare rock where the glacier had scoured the vegetation away, but it’s now exposed.  We could walk out to the roaring waterfall next to the glacier… 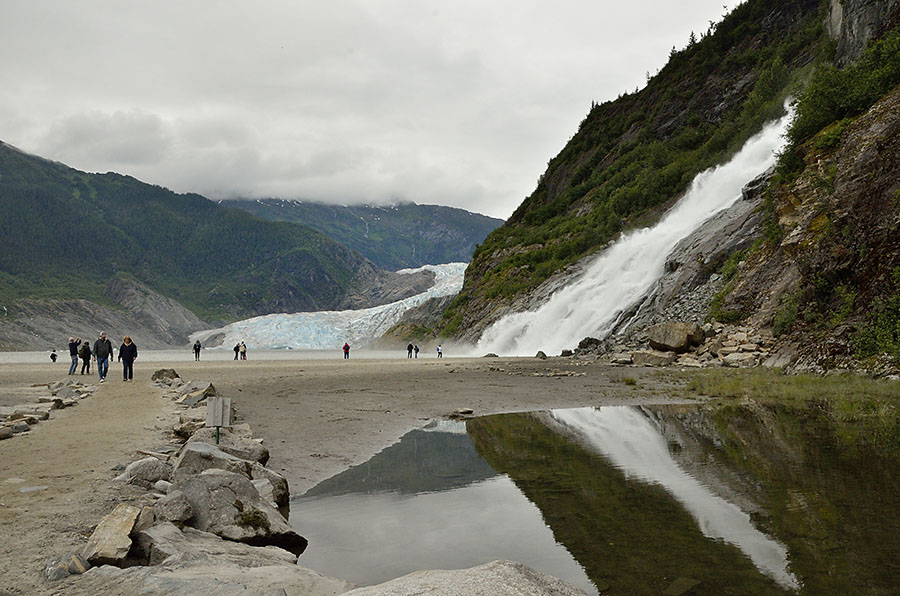 …and enjoy the wildflowers on the path along the way. 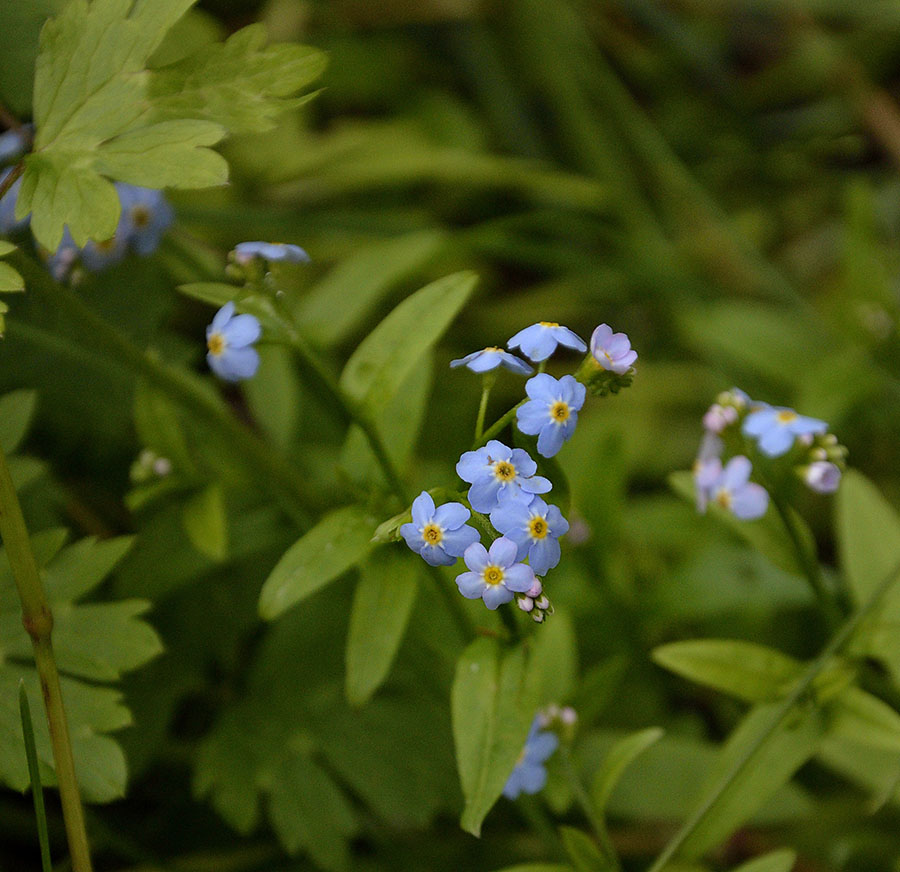 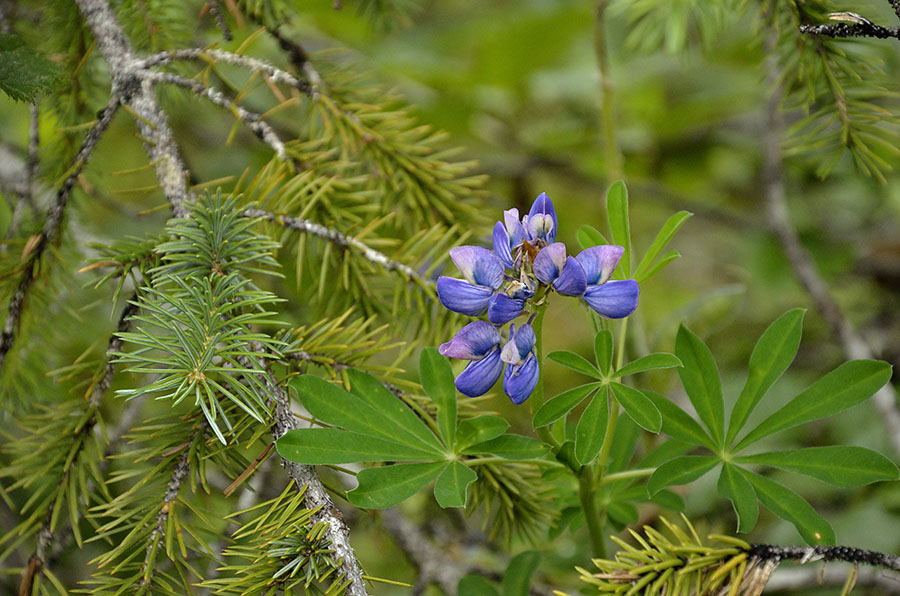 After visiting the glacier we drove downtown and across the bridge to Douglas Island, the site of an abandoned mine, homes, and a ski resort.  Some residents are very serious about skiing. 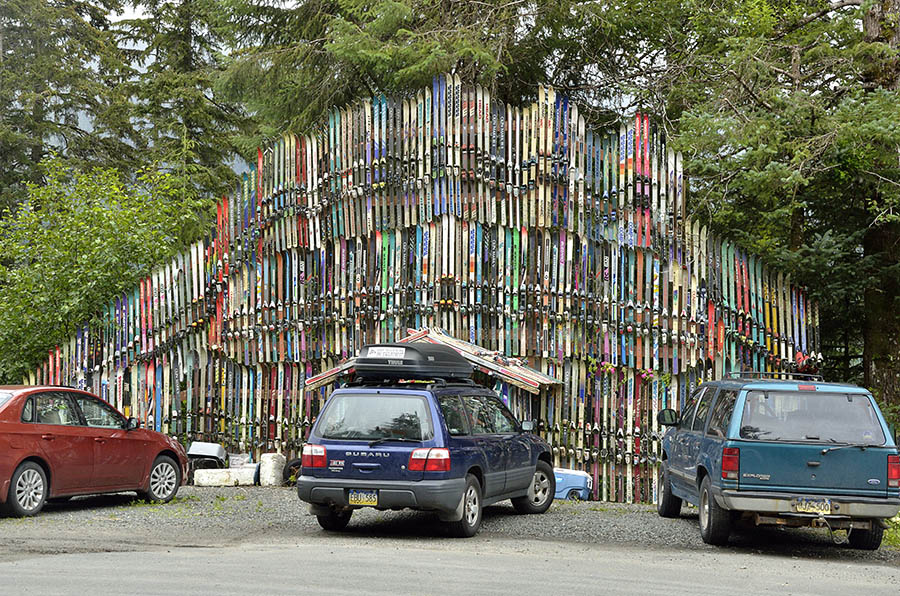 We explored downtown a bit – it’s a cruise ship destination so there are lots of the usual cruise ship stores.  I’ll never understand why anyone would want to travel to far flung places just to shop for overpriced diamonds and watches.  But hidden among those kinds of stores are a few “gems”, and you can find the real town by seeing what remains open after the ships depart every evening.  We enjoyed one of the touristy things – the tram ride up to the top of Mount Roberts.  We tried to get a discount by arguing that the mountain was named after someone in the family, but they didn’t believe us. 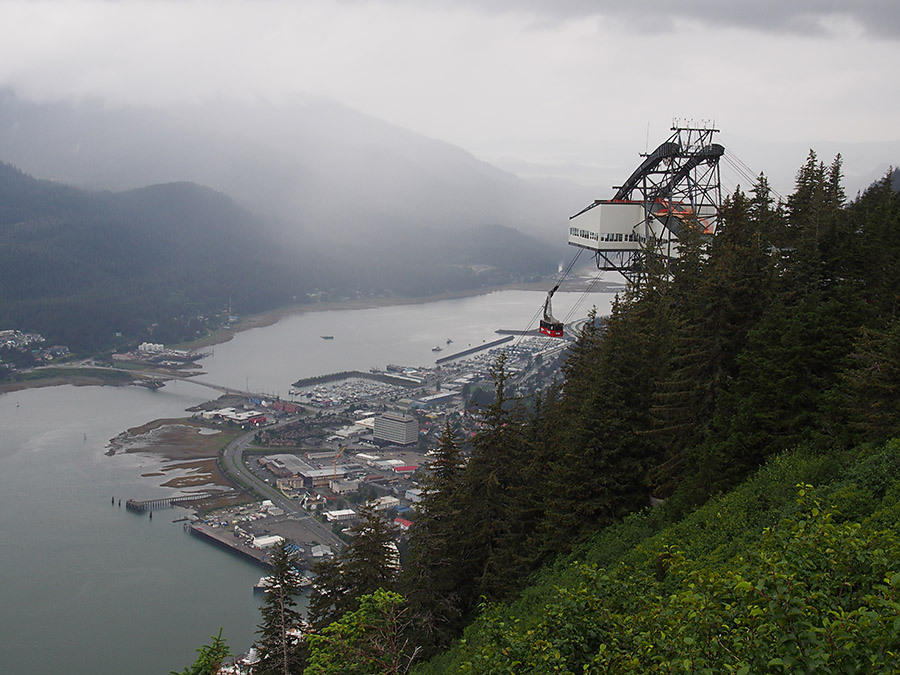 We had a great view of downtown, despite the drizzly misty weather, and we saw a mother grouse and her chicks while hiking around the top. 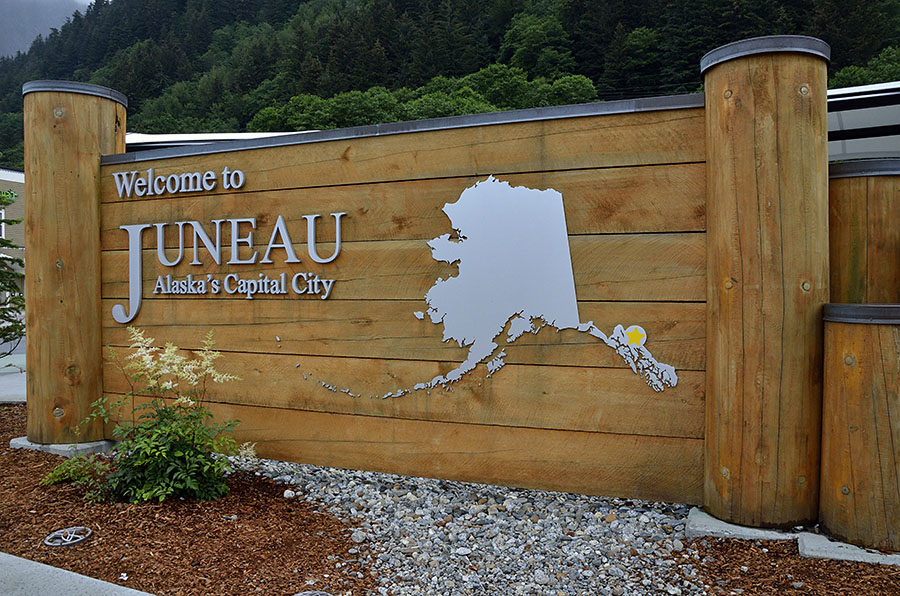 You can see the map of Alaska on this welcome sign – we’re cruising in Southeast Alaska, which is also called the “panhandle”.  Juneau is marked with a gold star, and you can see the islands and waterways of the Inside Passage.

3 thoughts on “Whales and The Big City”