We’ve been seeing a great deal of wildlife up here in SE Alaska, but the concentration of wildlife in Glacier Bay is pretty overwhelming.  Humpback whales are numerous – particularly when the tide starts flooding, bringing herring and other food on the incoming current. 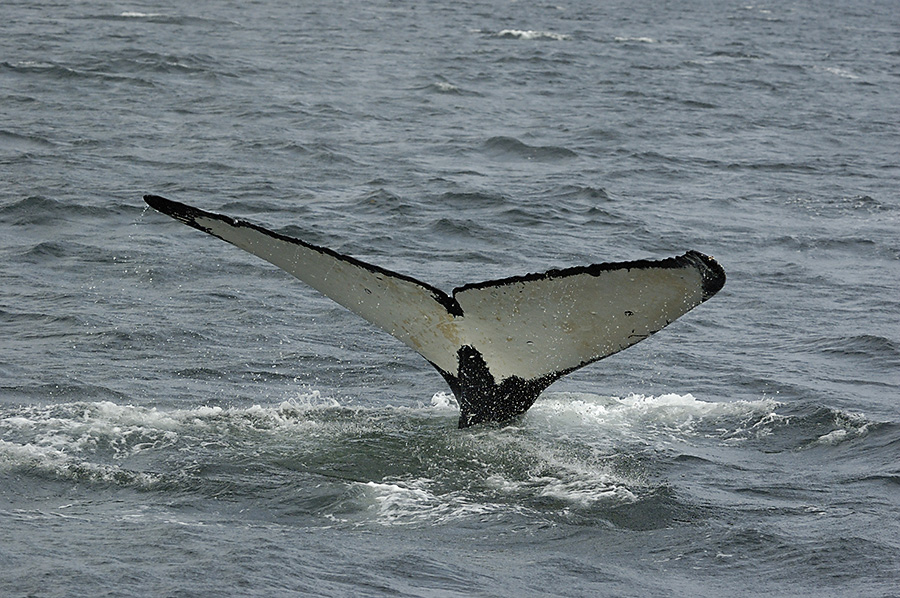 We saw humpbacks everywhere.  A group of 4 or 5 were hunting in Bartlett Cove (the park headquarters) for days.  When we were anchored near Reid glacier we had one whale hunting in the cove all one morning, and then two came to hunt the following morning.  I was paddling my kayak and I watched them – they typically blow about 4 times and then dive deep, which is when you see their tail appear.  It would be quiet for a little while and then the blowing would start all over again. 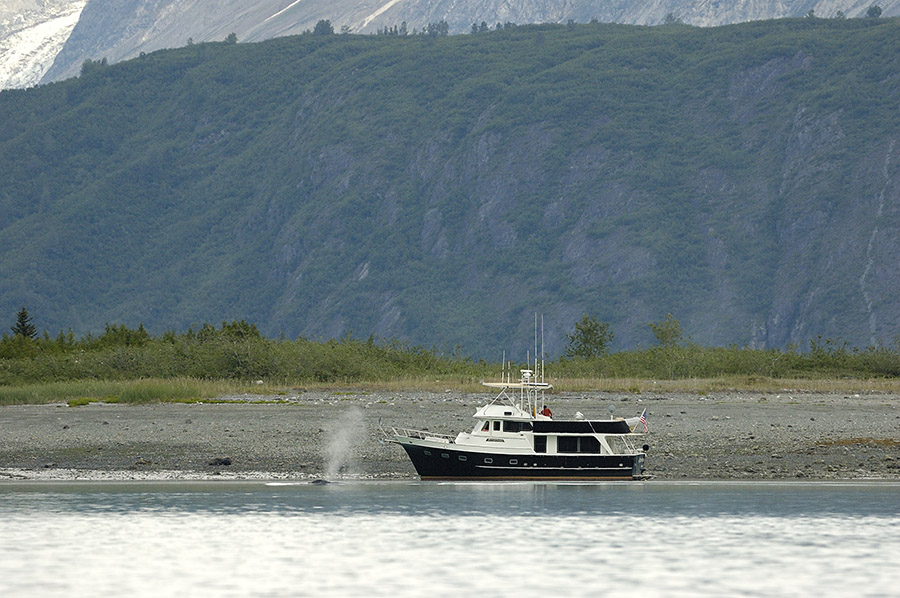 Finding whales is pretty easy – just look for the white puff of mist when they breathe, and in the coves and near vertical rock walls you can really hear the sound reverberate.  Sometimes they will breach – leap entirely out of the water, and that is a sight to see – the splash and noise are impressive.  An adult humpback is about the same size and weight as our boat, and we learned that they are passive listeners – they do not echo-locate, so the rangers tell you to make some noise so they will know where you are.  Ever try to paddle a kayak in a noisy manner? 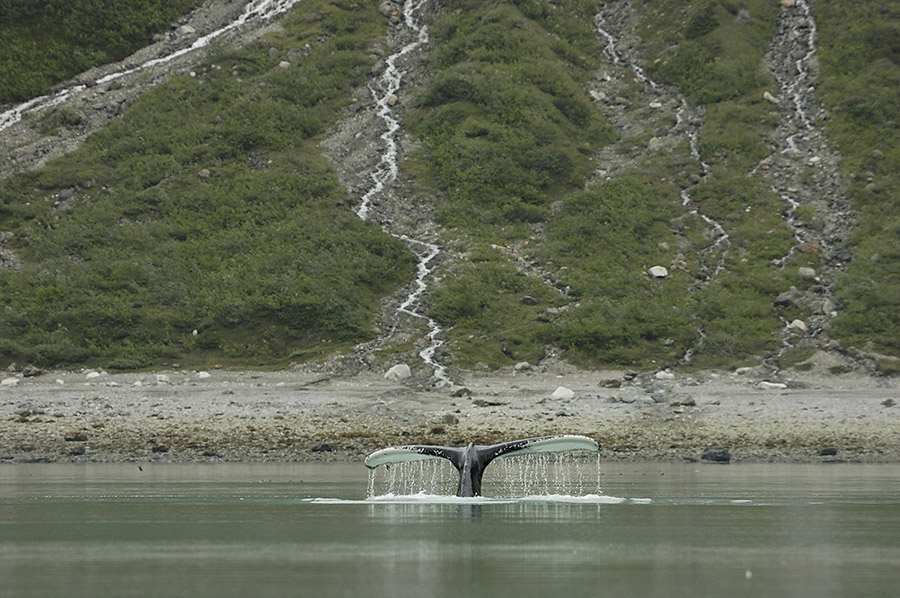 The bird life is varied and plentiful, with bald eagles… 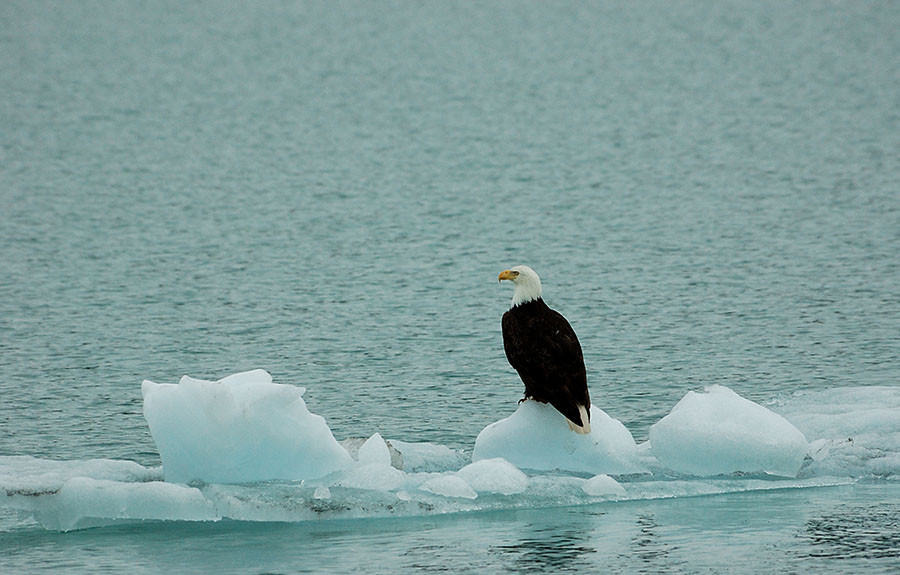 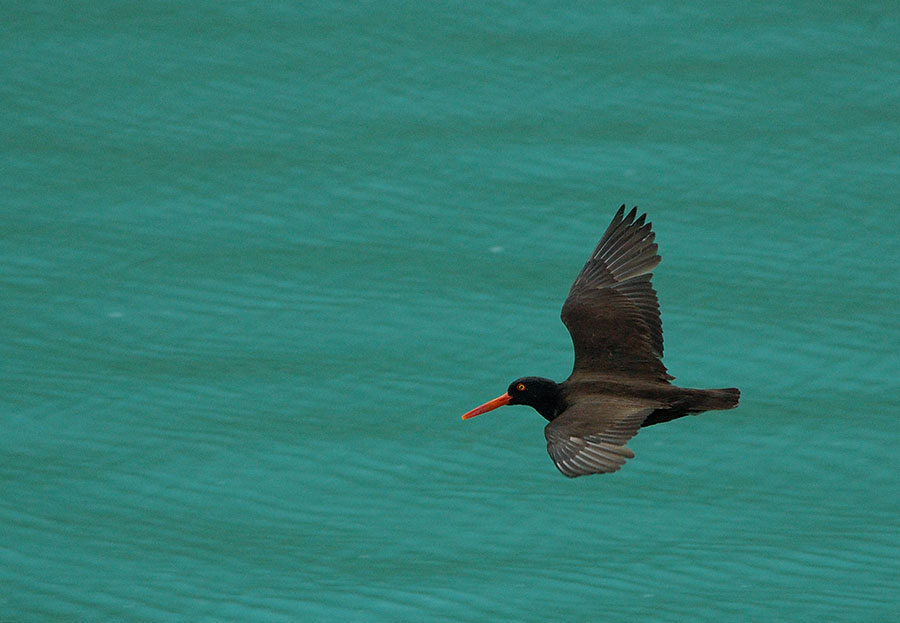 …little murrelets, murres, loons, harlequin ducks, northern shoveler ducks, black legged kittiwakes, and sea gulls who attack.  Both Jim and I were attacked by gulls – Jim was hiking and there were some gull chicks nearby that we never noticed until the parent gull made some screaming swoops at Jim’s head.  Another time I was paddling near the oystercatchers and a gull made several bombing runs at me – precision pooping.  I never figured out what I did to provoke him, but he went after me no matter how far away I moved.  Luckily the long paddle helped me divert the gull a bit, but I didn’t escape completely unscathed.

The puffins are some of my favorite birds – so compact and colorful.  We’re used to seeing the horned puffins in Nova Scotia, but the more common type here are the tufted puffins, with long yellow feathers swept back from each side of their head. 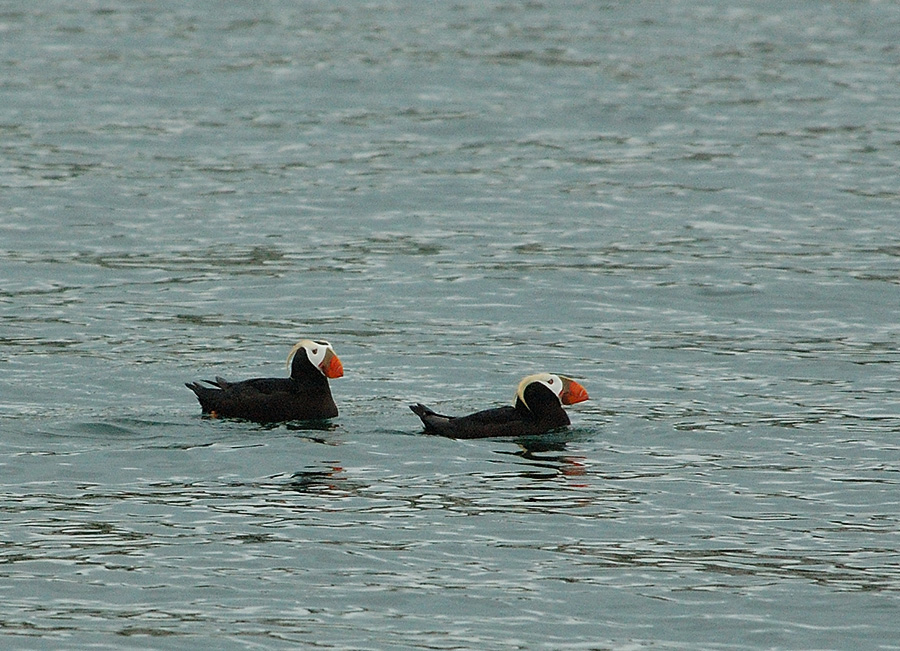 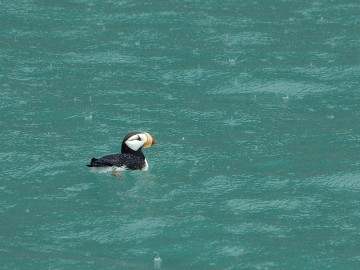 We saw puffins in flocks around rocky areas, and their bright orange beaks were unmistakeable when they zoomed past us in flight.  I was pleasantly surprised to find a lone horned puffin among all the tufted puffins – I think they are unusual to find in this part of Alaska.

We have been hoping to see some mountain goats for a long time, scouring the rocky areas with binoculars rain or shine.  We finally lucked out, finding a big male and his harem of five just past an eagle’s nest that we found the previous day.  I keep looking at that shaggy coat on the male, wondering what that wool would be like to knit with. 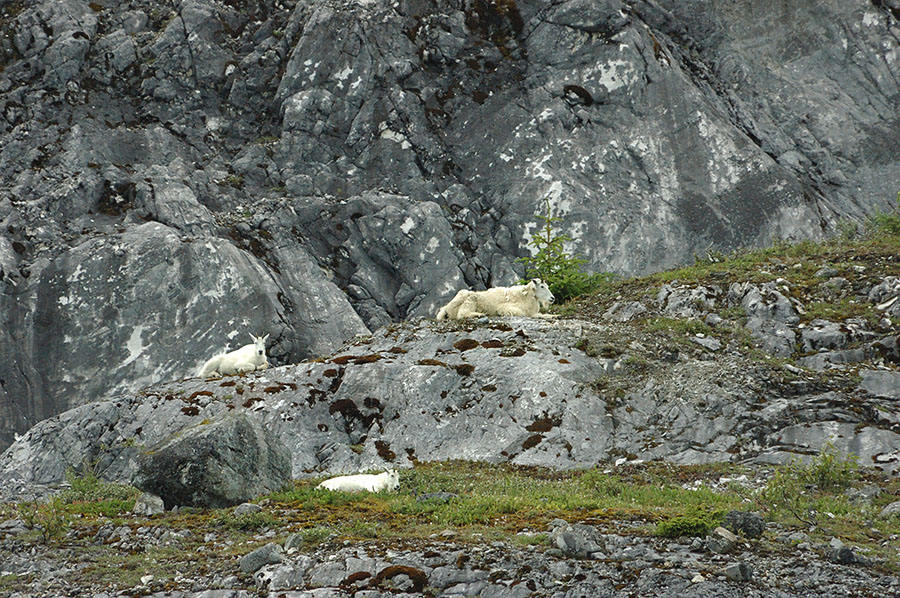 We’ve had a few bear sightings in Glacier Bay, but we got very lucky exploring up in the less-visited Wachusett Inlet.  Jim spotted a younger brown (grizzly) bear right near the inlet’s entrance, and we were able to bring the boat very close to shore so we could watch him.  He kept an eye on us, but the big boat didn’t seem to bother him very much. 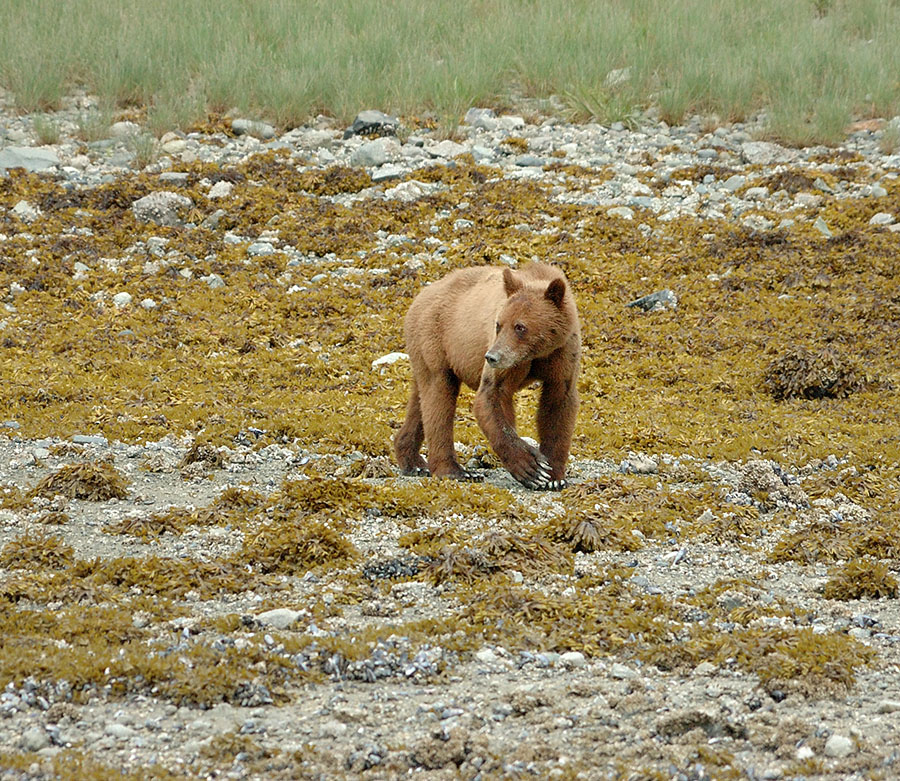 Notice the size of the claws on this young bear!  He was turning over rocks to find clams and mussels in the intertidal zone, and then he moved up to the grass above the tide line and munched on sedge.  At the far end of the inlet, almost to the head we saw a very large brown bear who came out of the woods and sat down on the side of a creek. 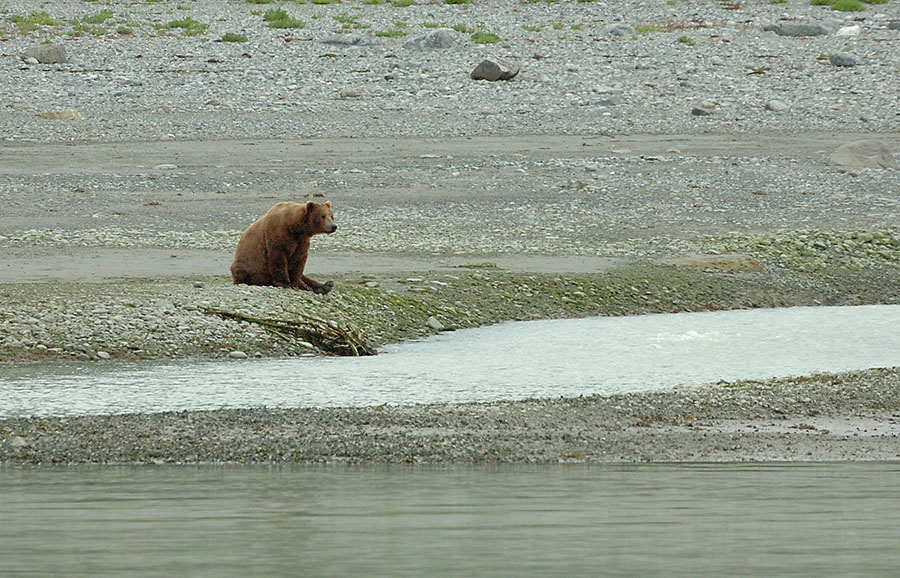 It was so funny to see him sitting like that, but he was watching the rushing water intently for quite a while, and as we started back out the inlet we saw him run into the creek and pounce on a big salmon.  He made quite a splash, but then he took his fish and headed back into the woods to eat it.  The salmon are just beginning to run so we expect that we’ll see more bears fishing for the rest of the summer.  We saw a black bear fishing in a creek near where we anchored for the evening – the first black bear we’ve seen in a while; we’ve mostly seen the larger brown bears.

We heard occasional reports of orcas in the park, but we only saw some briefly once.  They seem to be scarce this year. 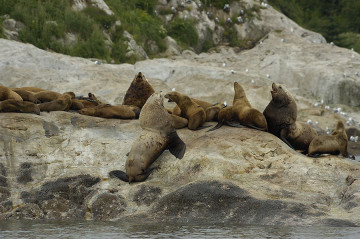 A more plentiful predator in the water is the Steller sea lion – a species that is much larger than it’s California cousin.  The beachmasters can be quite large – 1500 lbs or more.  Although sea lion colonies are loud the big male beachmasters (there are 3 in this photo) are easy to hear above the din.  Sea lions seem to spend a lot of time napping in piles, and making noise… 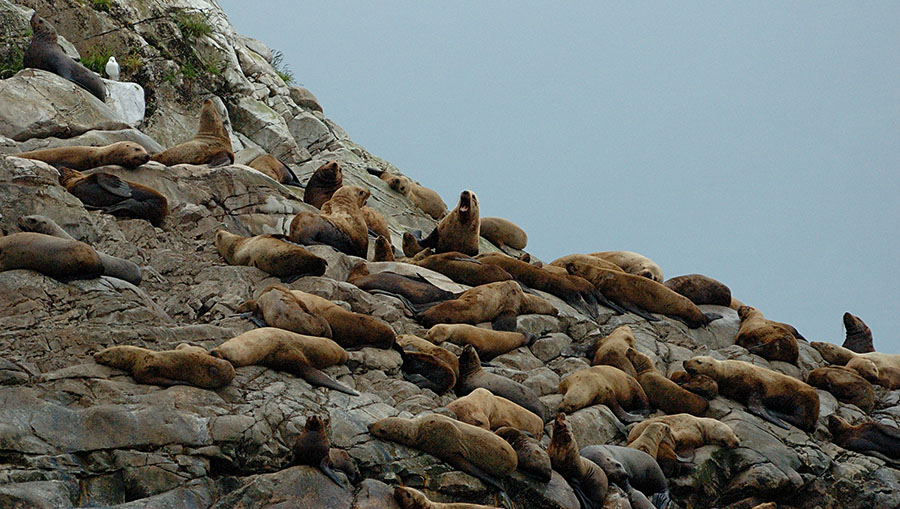 …but we can always count on the young ones to give us a great show as they frolic in the waves.

I think some of my favorite animals are the sea otters – they are just adorable.  They lay on their backs with their big flipper/feet sticking up to eat and sleep, individually or sometimes in large groups. 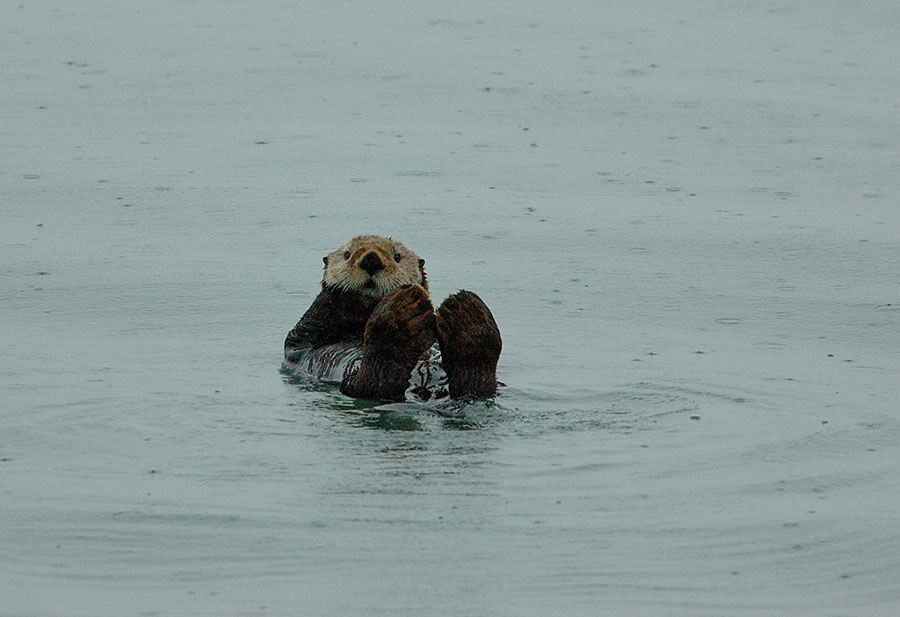 They dive underwater to hunt for shellfish and crabs, sometimes using a rock to break the shell. 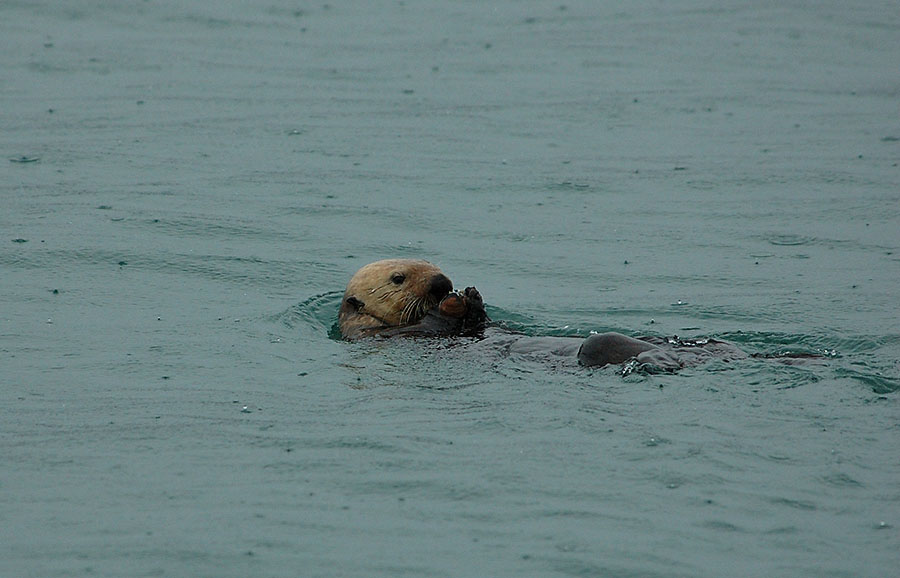 The otters carry their pups clutched to their chests, though the pups are getting pretty big and it’s funny to watch a parent make the young one chase after it – a little tough love. 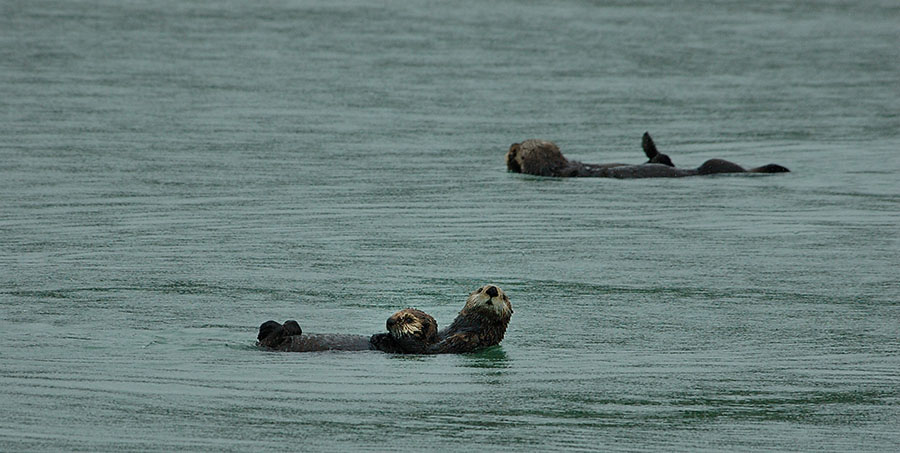 3 thoughts on “Glacier Bay – the Wildlife”