Did you know that Glacier Bay National Park is the size of Connecticut, and that 27% of the park is composed of glaciers or water?  As recently as 250 years ago, at the end of the most recent Little Ice Age, the entire bay was covered by a single glacier 4000′ thick and 20 miles across its face.  Today the Grand Pacific Glacier has receded and about 50 distinct glaciers remain – some coming to the edge of the seawater, and some hanging in the mountains.  To say that this is a magnificent place would be an understatement. 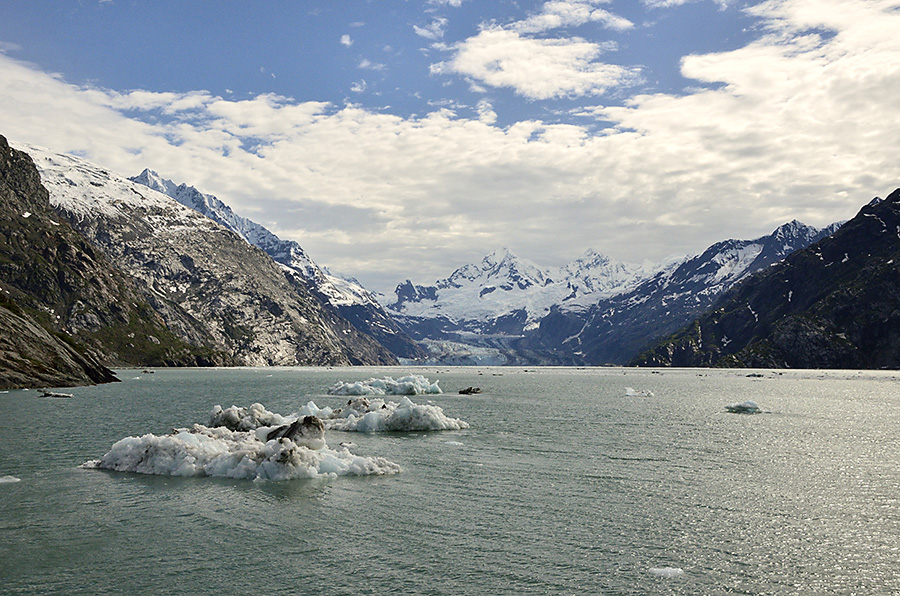 Despite the grand landscape, abundant wildlife is a major reason to visit the park in the summer – there are large numbers of humpback whales, sea otters, Stellers sea lions, seals, sea birds, bears, wolves, mountain goats, and moose. 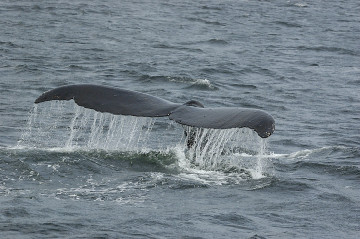 We had to stop the boat twice because of whales right in front of us – once a few miles from the park entrance, and again shortly after we entered park waters.  We saw single whales, mothers and calves, family groupings of four or five whales… bubble net feeding, diving, and tail-slapping.  We saw whales as we cruised, and we often had whales feeding in the coves where we anchored, blowing and diving for hours.  Their blow is quite loud and it reverberates off the rock walls of the coves – it’s hard not to notice them! 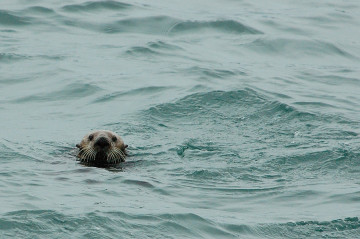 Although we’ve seen a handful of sea otters in the area, the park had large numbers of them – some clutching baby otters.  They hunted individually, but sometimes we saw them grouped together in huge “rafts” of 50-100 animals.

Stellers sea lions and harbor seals give birth and raise their pups in the area so some parts of the park are closed to boat activity during the most active weeks of pupping.  We paused near one sea lion rookery that was full of noisy adults, gamboling youngsters, and a few barking male beachmasters – every rock and horizontal surface was covered with raucous sea lions.  Just after leaving the park, out in Icy Strait we had to stop the boat so we wouldn’t bump into some sea lions napping in the channel. 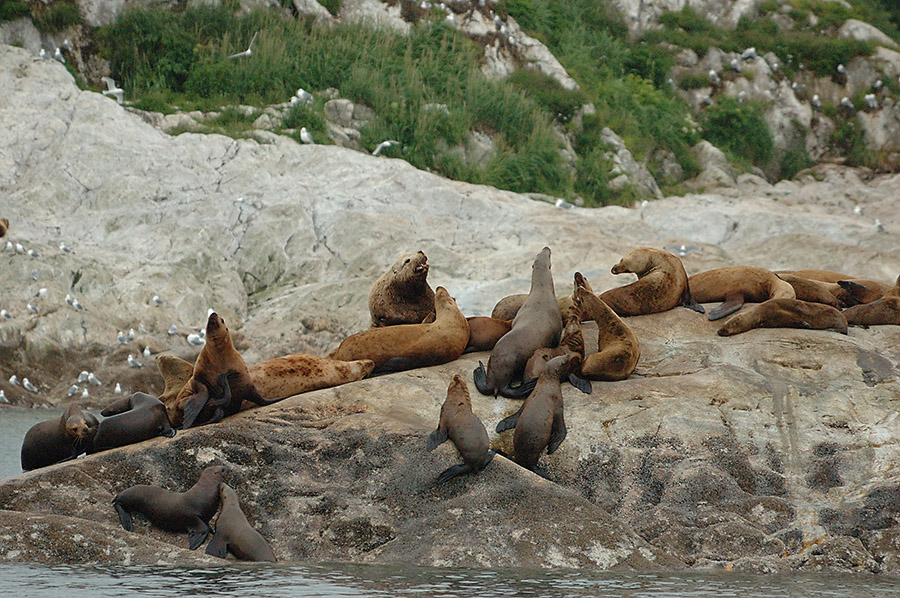 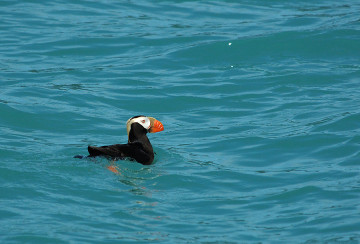 Summer is the time to raise young, and many of the rocky islands are home to nesting black-legged kittiwakes, pigeon guillemots, and tufted puffins. These chubby little birds are a favorite, and that big orange beak makes them stand out from the other sea birds. 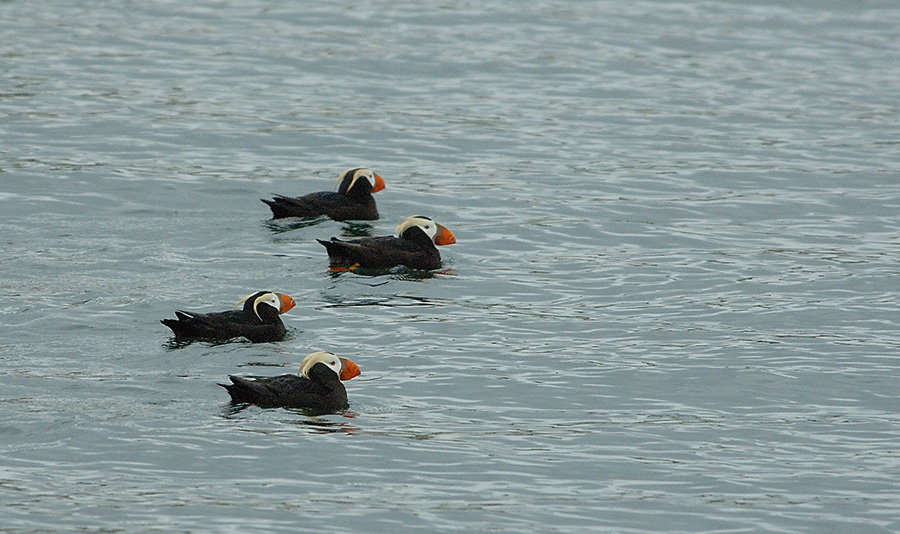 There are so many tales I could share about Glacier Bay – tiny eel-like warbonnet fish in the shallows, shy seals following me in the kayak, the frustration of hearing about a mountain goat sighting from a boat ahead of us and not being able to find it, watching a brown bear on the shoreline, spotting some orcas cruising down the bay, and hearing a report of wolves seen by a boat in an anchorage south of us.  We got so wrapped up looking for wildlife and then we put the binoculars down and saw the ice. 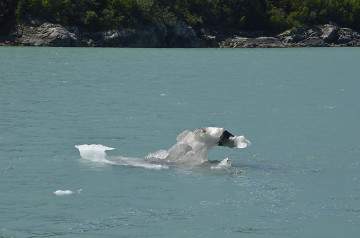 As we got farther north in the west arm of the bay we started to see “bergy bits” and smaller “growlers” – ice cast off from the calving glaciers.  These smaller chunks get blown around by the wind, and we have to consider ice and wind when choosing an anchorage.  Shallow water is best since the bigger bergy bits will hopefully run aground before we do.  I love all the odd shapes – they can look like birds or sea monsters from certain angles, but we have to respect the ice since even a small chunk could damage a prop.

We had a sunny day with just some high clouds – perfect conditions to go all the way up to see the dirt-covered Grand Pacific glacier and its neighbor the Margerie glacier. 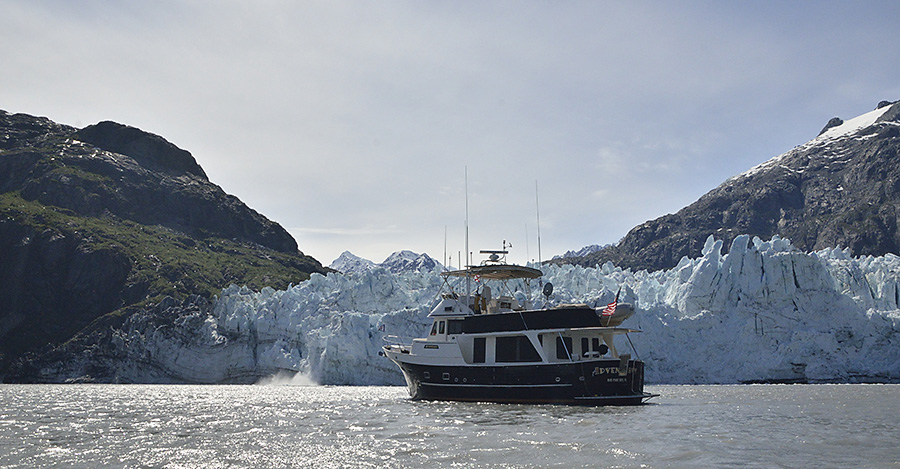 I took this photo from the kayak, but it doesn’t convey the size of the Margerie glacier – a mile across its face, 250′ tall above the water and 75′ below the water, a 21 mile long river of ice from the Fairweather mountain range.  ADVENTURES is about 1/4 mile from the face in this photo, and you might notice a small splash from calving just in front of the bow.  The 954′ ISLAND PRINCESS cruise ship was 1/4 mile behind me when I took this photo, and even that massive floating hotel looked small up against the Margerie.  (We were in frequent radio contact with the cruise ship, keeping out of each other’s way.)

We dodged the ice and headed south for a look at the Johns Hopkins glacier (pictured at the beginning of this post) which is advancing at the rate of 10-15′ per day.  Like the Margerie, it is a mile across its face and about 250′ tall.  We couldn’t get very close to it because of seal pupping as well as a thick layer of brash ice, but it was beautiful even at a distance.  We were able to make a closer approach to the Lamplugh glacier, a mere 180′ high and 3/4 mile across its face.  It is currently 16 miles long and is stable.  I loved the patterns in the ice, especially the very deep blues, and it was hard to tear ourselves away. 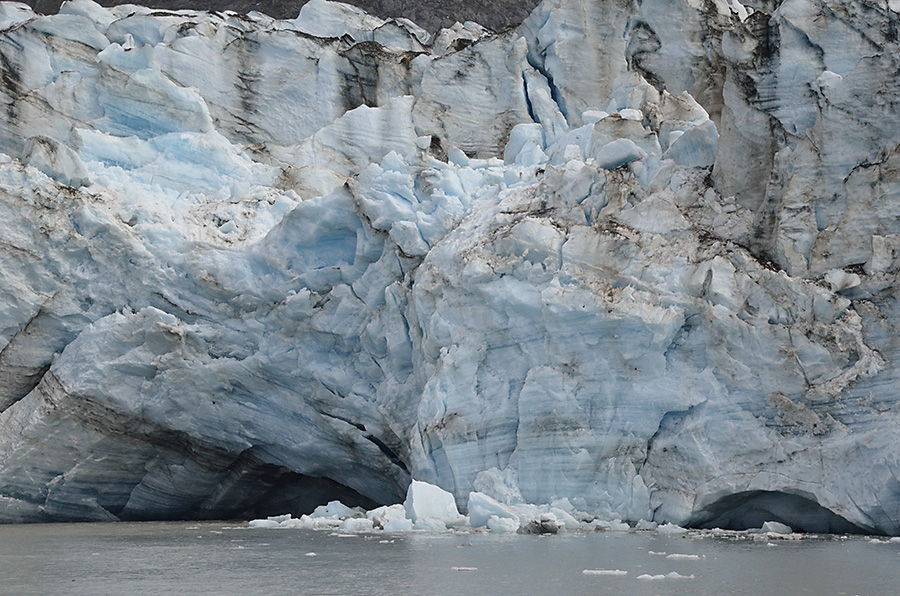 After an exhilarating day of puffins, bears, and ice we anchored in a side inlet with the “small” Reid glacier.  More on that in the next entry.  We have no cell or Internet signal up in Glacier Bay, and we’re about to head back there for more exploration starting Friday.  We’ll post more photos and stories about this marvelous place when we emerge. 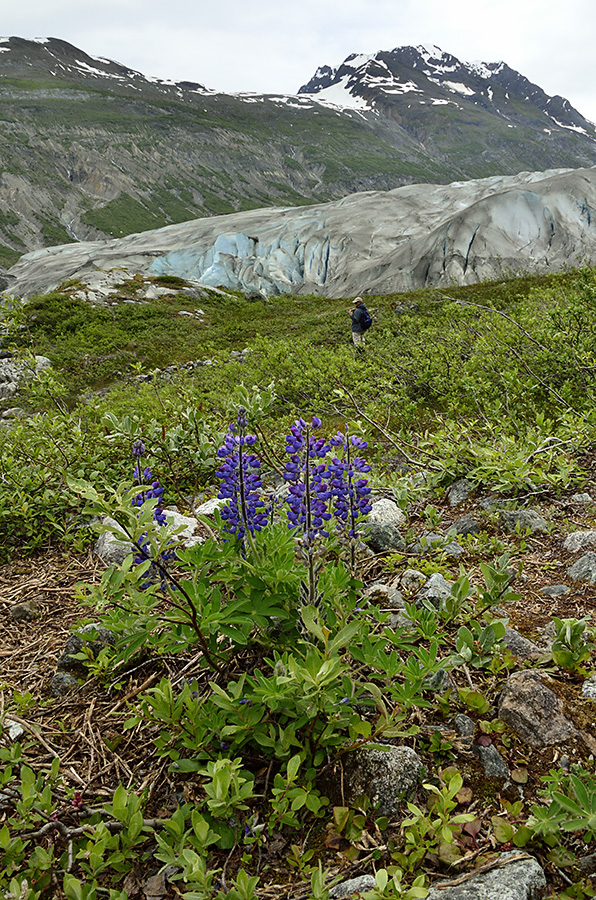