After the frenzy of ice and wildlife in Glacier Bay we needed a little pause to do some maintenance, small repairs, and wait for some weather to pass.  The small Tlingit town of Hoonah is about 30 miles from Glacier Bay on Icy Strait, and it’s a perfect spot to tie up behind their big rock breakwater and catch our breath.  “Hoonah” is Tlingit for “where the north wind doesn’t blow”.

Hoonah has about 850 people, but its population doubles or triples two or three times a week in the summer when cruise ships come for the day.  The ships anchor off the point outside the harbor and they use tenders to bring passengers ashore to an old cannery that has been re-vamped with native cultural shows, cafes, a little museum, shops, and the world’s longest zipline. 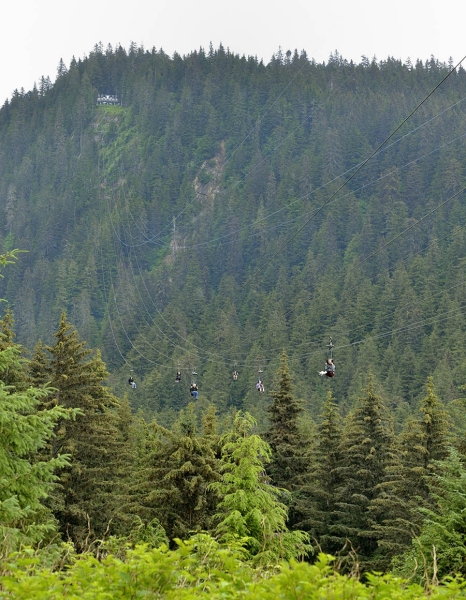 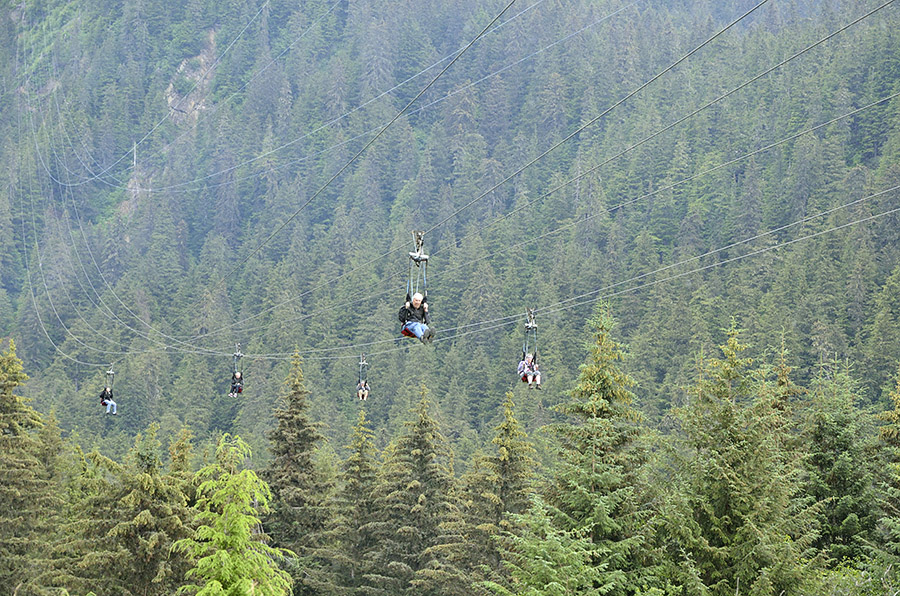 We like Hoonah – it has a very laid-back atmosphere and people are friendly.  The Huna Tlingit originally lived at the mouth of Glacier Bay, but during the Little Ice Age when the Grand Pacific glacier advanced to cover the entire bay they were (literally) pushed out.  The Huna Tlingit still consider the park to be their land and they have had a rocky relationship with the Park Service until fairly recently.  The situation with the park is still not ideal, but it seems to be headed in a positive direction.  The Park Service and the tribe are working together to build a Tribal House in the park, and we got to meet some of the Tlingit carvers who are creating the wall panels and totems.  They’ve been working on the project for about three and a half years, and the wall panels and totems we saw were exceptional.  The carvers were gracious and insightful, and we could have talked with them for hours. 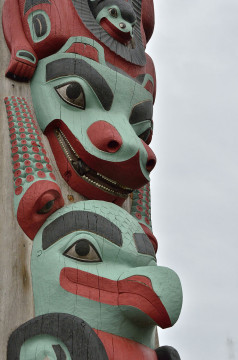 Although the designs are very traditional some of the execution has a subtle contemporary flair to them, and we saw more obvious signs of that modern style in the totems in front of the town school.  Notice the octopus eye and tentacle on either side of the bear head in the photo on the left. 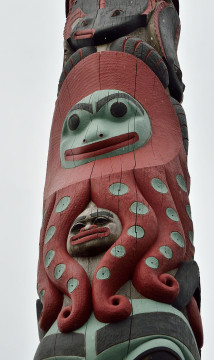 I really liked the different style and particularly the nod to the octopus, especially since the giant Pacific octopus are unique to this region.  Totems can represent several different things – they can tell a story, commemorate an important event, or honor an ancestor.  Each one is a statement by the artist (carver) but it also tells us something about the time and place where it was carved.  It is a privilege to talk with the native carvers and learn more about the nuances of their craft – they seem very open and happy to share.

Right at the entrance to the inner harbor in Hoonah is an island with an active cemetery.  As we were coming in I saw a bald eagle sitting at the foot of a fairly fresh grave – it didn’t have any grass growing on it yet. 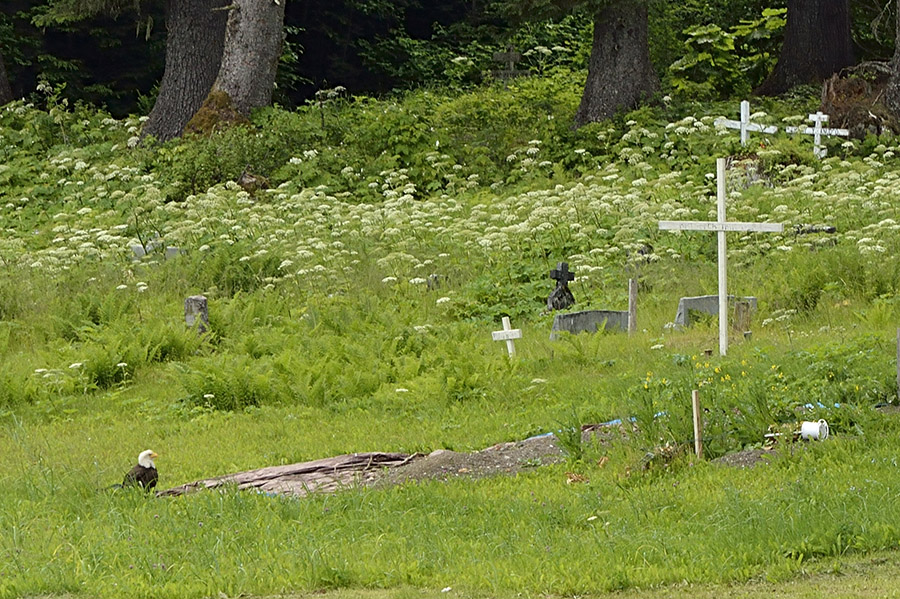 I was very moved by the scene, and when I showed the photo to one of the harbormasters he said “Oh, it was probably an ancestor keeping an eye on things.”  The two major Tlingit moieties in this area are Eagle and Raven, and there are plenty of both in town. 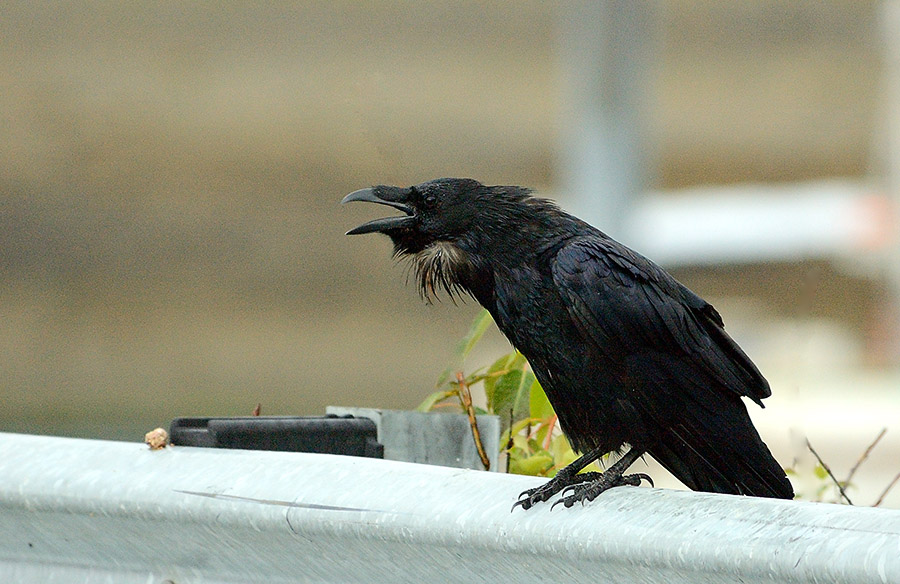 The more I learn about ravens, the more I like them.  They’re clever and expressive, making such a range of noises – klonks, barks, screams, and things that sound like they were created electronically.

Eagles are very plentiful in town, and we would sometimes see as many as two dozen (!!) perched on the breakwater in the evenings. 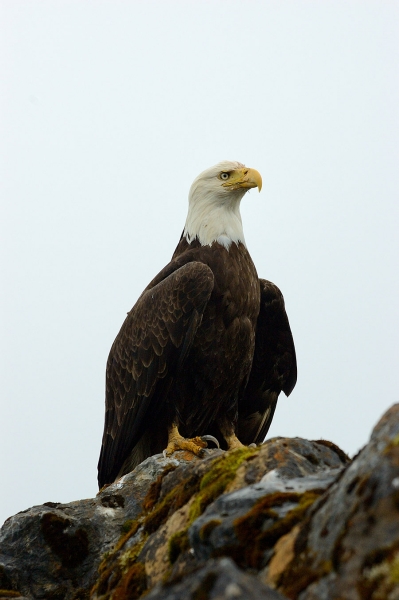 It goes without saying that these are magnificent birds, and it’s such a thrill to be able to watch them swoop just overhead, make a tight banking turn to grab a fish, or tussle with another eagle in mid-air over possession of food.  We always stop to watch and admire them, but the locals do too.  I think it says a lot about these people when a bird as common (here) as a seagull still captures the interest of the people who see them all day, every day.

About four years ago a pair of eagles built a nest in a tree right in town, almost across the street from the school and behind the marina.  We could watch the nest with binoculars right from our pilothouse and whenever we noticed that the nest action was interesting I would grab the long lens and run up the dock.  The pair has returned every year and this year they have two fuzzy little eaglets.  We couldn’t see them most of the time since they were in the deeper part of the nest, but occasionally one of them would perch up on the edge of the nest. 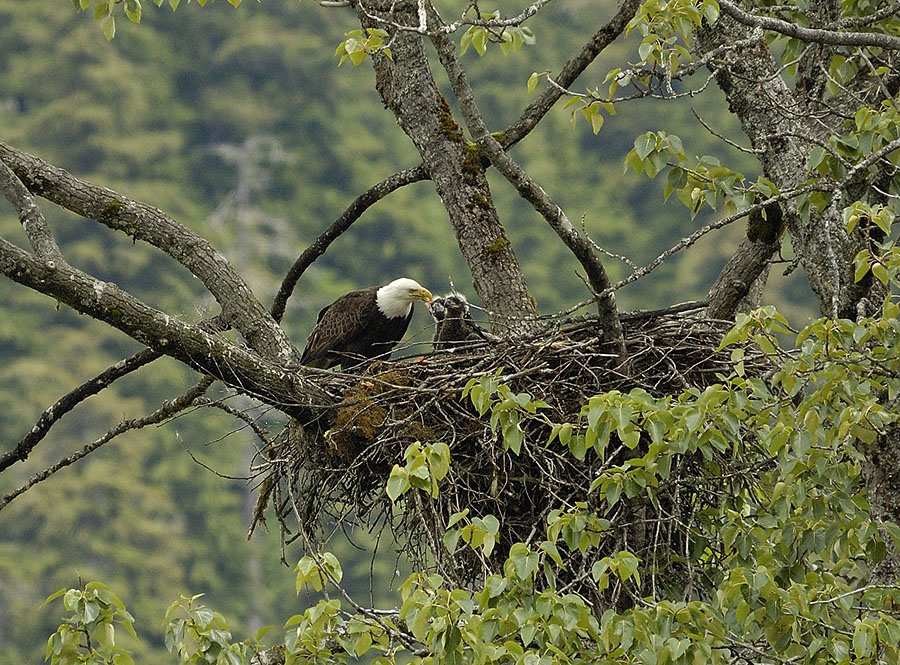 We had a stretch of very rainy days in Hoonah, and when the rain stopped for a little while some of the eagles found places to perch and try to dry out.  I think this one looks pretty cranky, but after days of steady rain and chores we could sympathize. 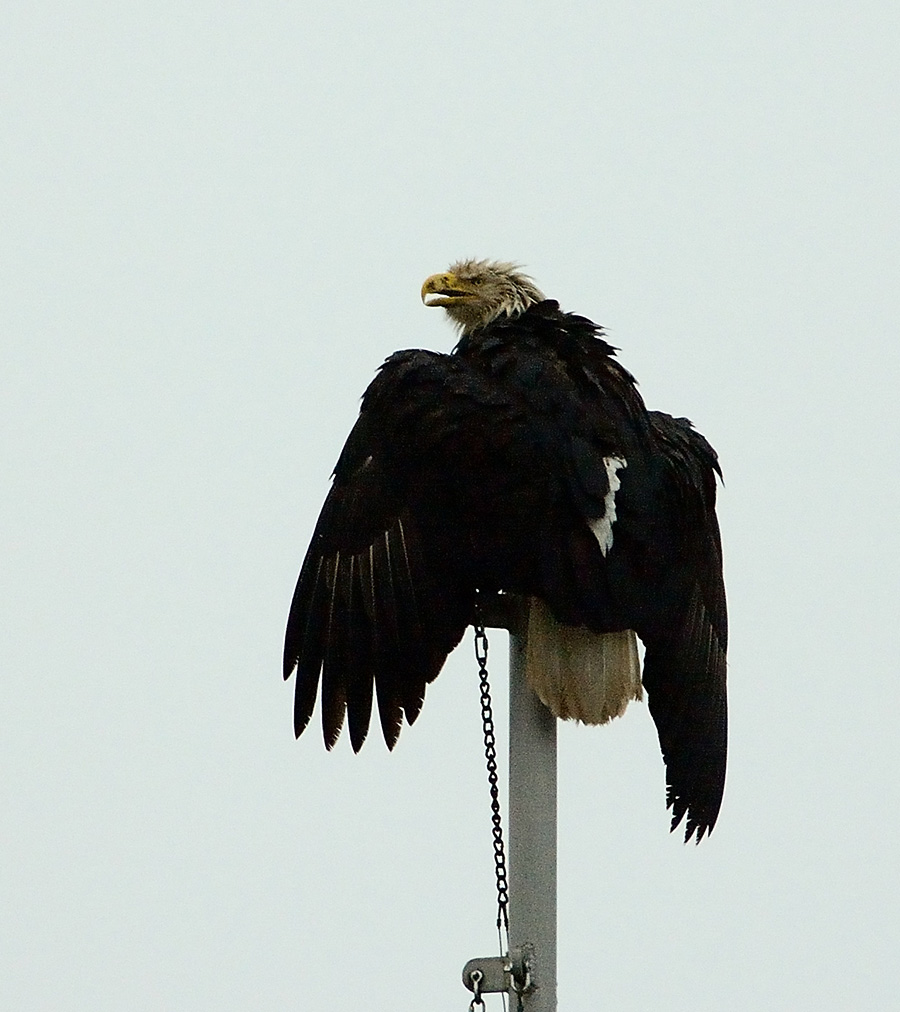 The weather started to improve, the sun came out, and I just had to go for a nice long paddle in the kayak.  We had a 22′ tide that day so I had to wait for a few hours until there was enough water to get into the shallow back bays.  I headed out past the cemetery and around the back of the island, and as I was drifting close to shore on the flooding tide I looked up and saw this little fawn. 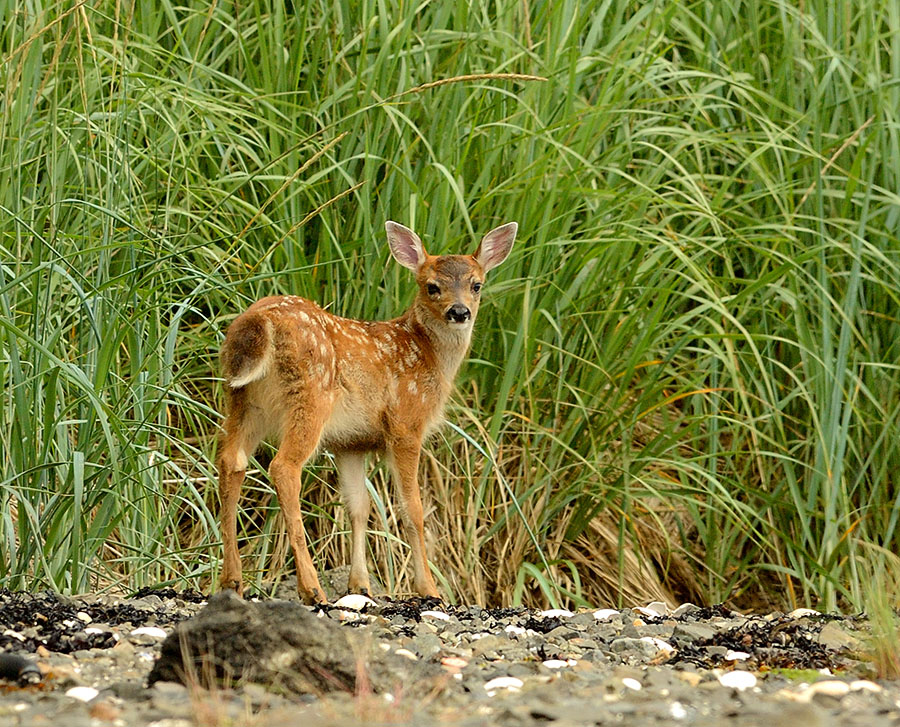 It was just walking down the beach and didn’t seem afraid of me at all.  The wind and current were pushing me at about the same rate that the fawn was walking so it was a great chance to just watch and photograph it.  I started looking around for its mother and found the doe about 200 yards back, just strolling along.  Eventually the fawn waited for its mother, and tried to get some milk.  She wasn’t interested in letting him eat, but she was very tender and attentive towards her little one. 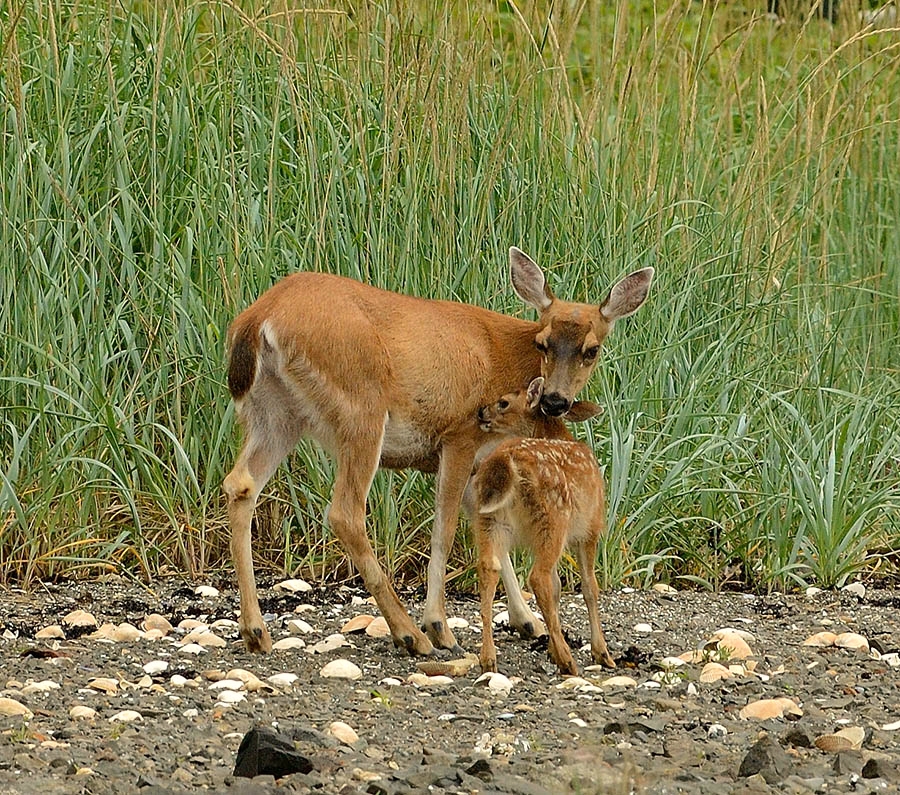 The encounter with the deer was a lovely surprise, and the hummingbirds, kingfishers, spotted sandpipers, black turnstones and surfbirds capped off a really good week. 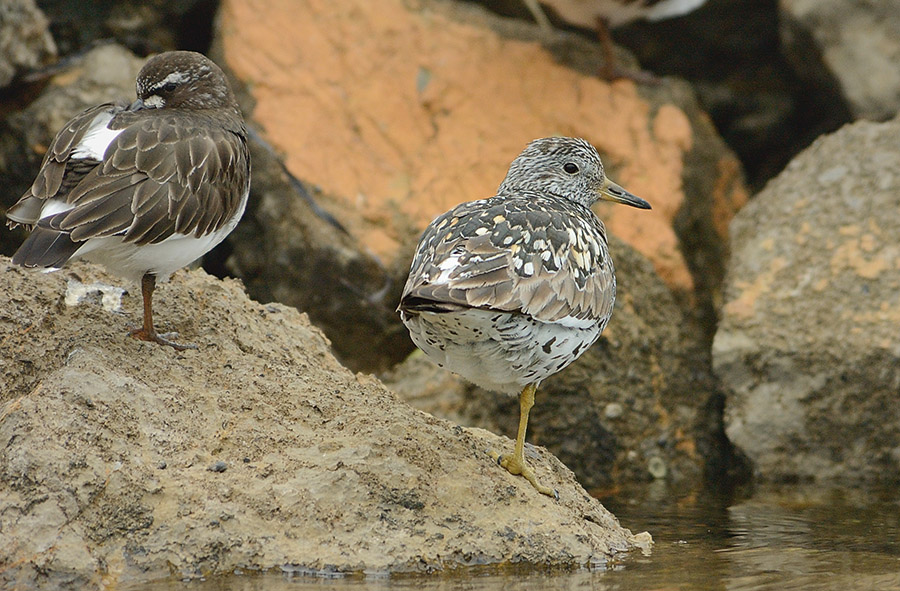 3 thoughts on “Where the North Wind Doesn’t Blow”