We have had amazing wildlife sightings every single day.  It’s easy to be spoiled by the excellent wildlife shows on television, but nothing… absolutely nothing beats the excitement of seeing wildlife from the deck of your own boat.  As we left Petersburg we saw these Stellers sea lions (bigger than California sea lions) piled on a buoy, barely lifting their heads to look at us as we passed by. 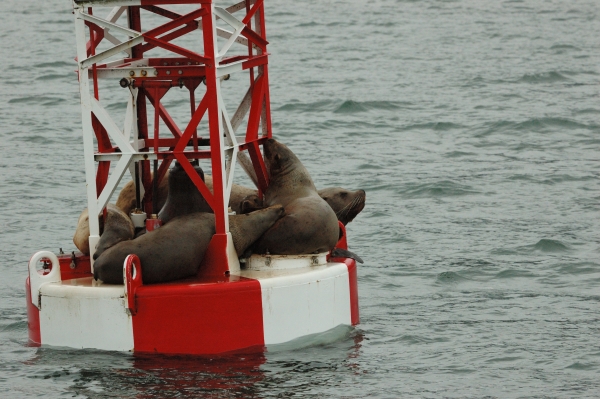 Here’s a map to show the area where we’re currently cruising. 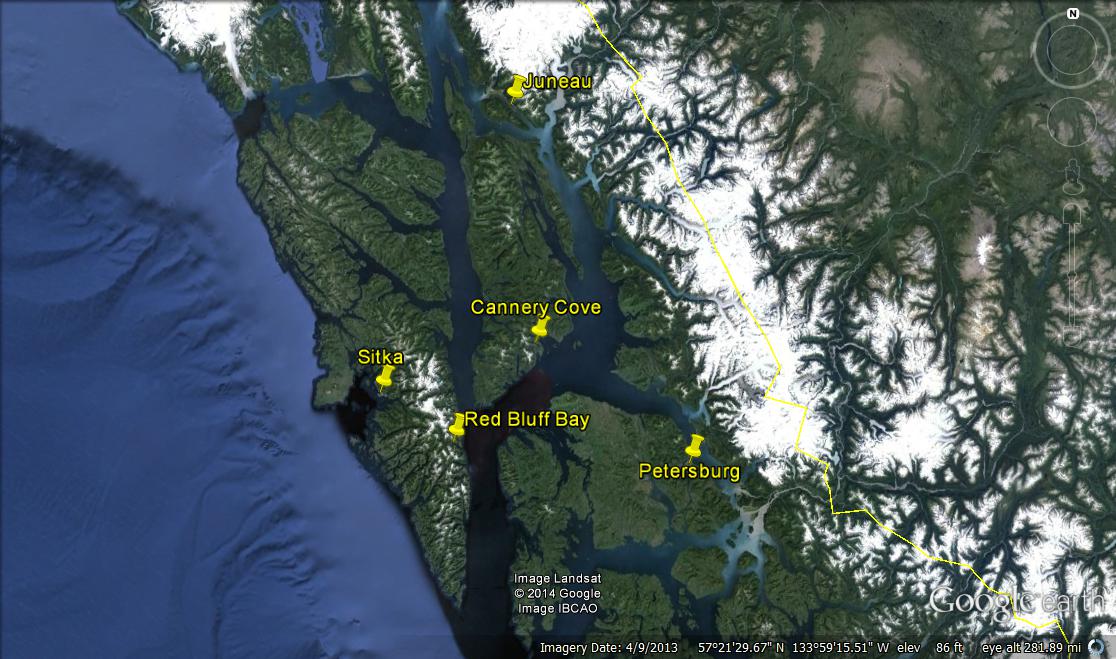 We traveled through Frederick Sound on our way to Cannery Cove on Admiralty Island, and the Sound lived up to its reputation for whale sightings.  We saw whales all morning, broaching, crashing, and splashing.  Sometimes the whales were too far for camera lenses, but we saw quite a show with binoculars.  It’s amazing to see an entire humpback whale completely out of the water.  A little while later we had whales much closer to the boat, and we watched some humpbacks, including a mother and calf broaching and feeding. 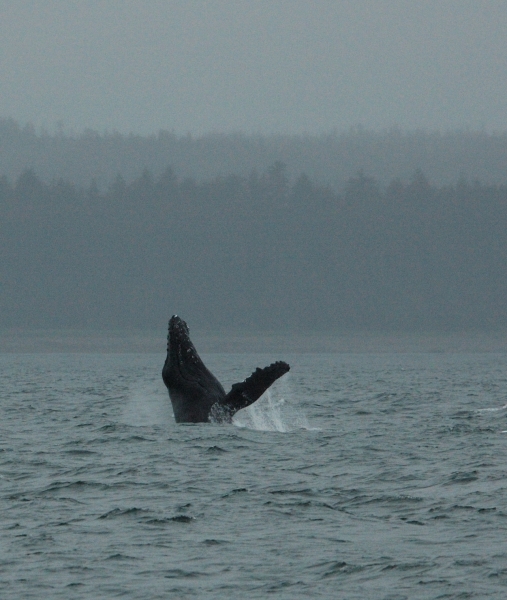 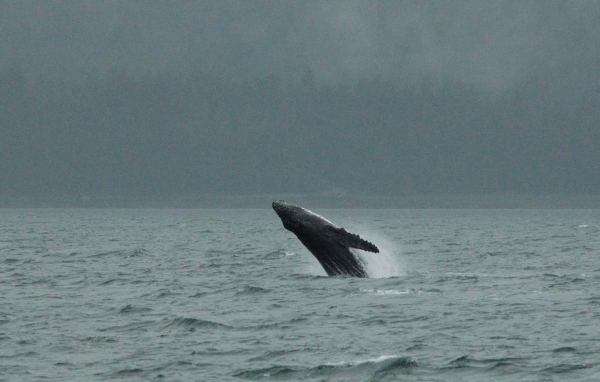 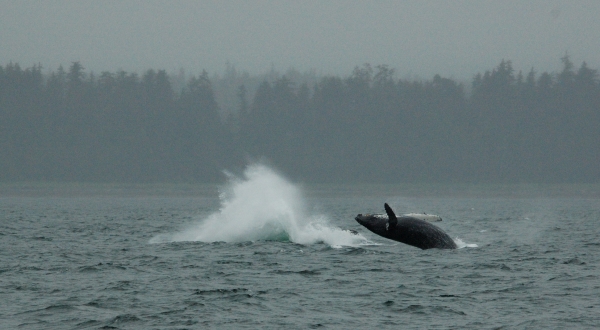 We headed into the anchorage at Cannery Cove, so named since it used to have a cannery on the shore though it’s gone now.  We had a long day of running so we had a quiet evening planned, but as we were fixing dinner we saw a brown (grizzly) bear on the shore, and we dropped what we were doing to watch him for a while. 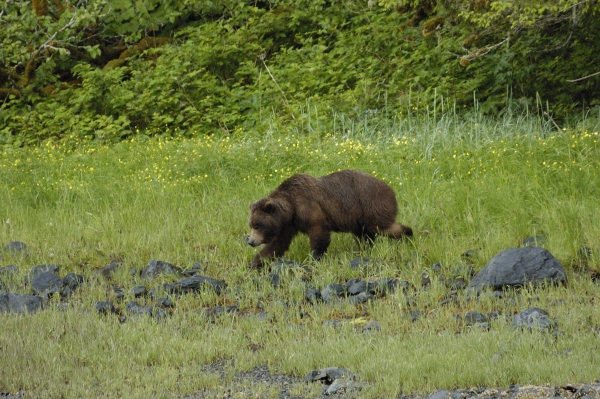 All that happened in just one day.  The next day we got the predicted rain and wind, but again in the evening around dinnertime the shoreline got interesting.  We saw one brown bear – he looked young – standing up and looking around.  They’re very funny looking when they stand (as long as you’re a safe distance away with binoculars).  After a while a bigger brown bear ambled along the shoreline and the younger one kept standing up to check on the bigger one.  Forget dinner… this is a great show!  Eventually the younger one loped away as the bigger one loped after him, but it looked like a half-hearted chase.

The next morning as we were leaving the anchorage, we saw several bald eagles hunting fish in the water.  Most were adults, but there was one younger bird.  It takes 4 years for an eagle to develop the white head and tail, and the younger birds look bigger because they have larger feathers – easier to learn to fly with, though less maneuverable. 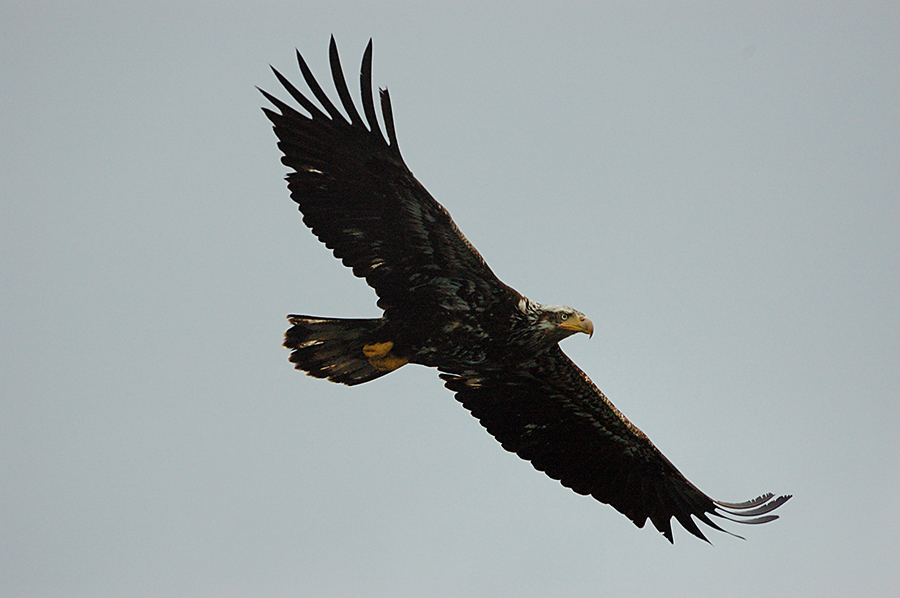 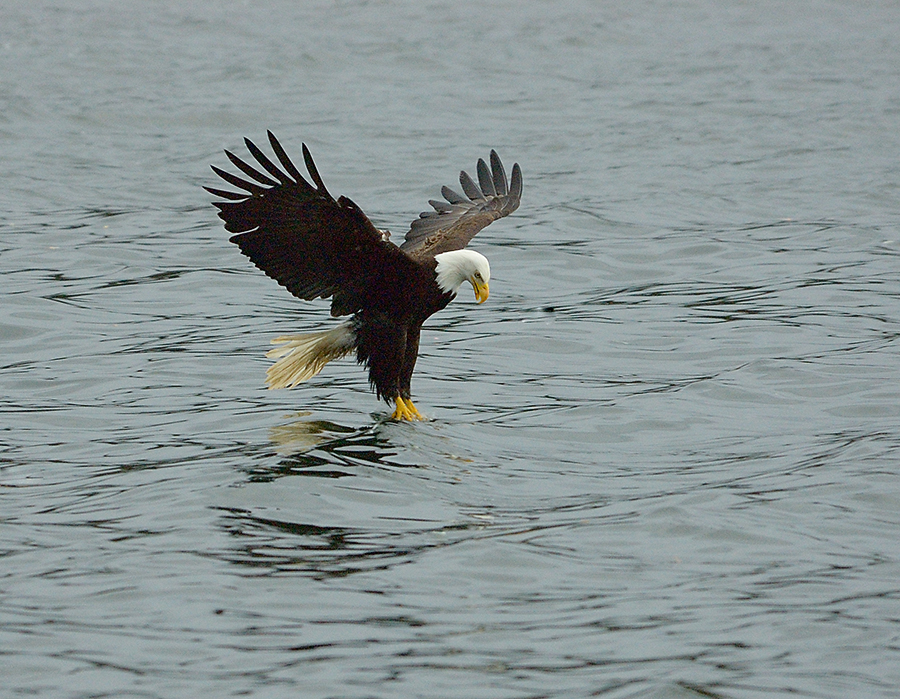 From Cannery Cove we headed to Red Bluff Bay on the east side of Baranof Island, hoping to see more bears and waterfalls.  I keep forgetting to mention the waterfalls – they’re everywhere.  Big ones, tiny silvery thread-like ones, small ones, loud ones… and the featured waterfall in Red Bluff Bay is really dramatic. 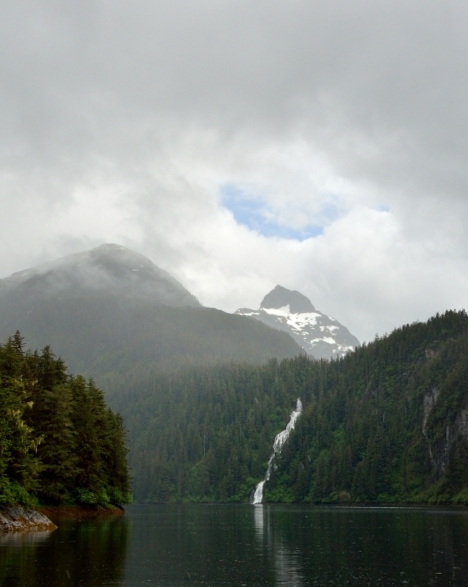 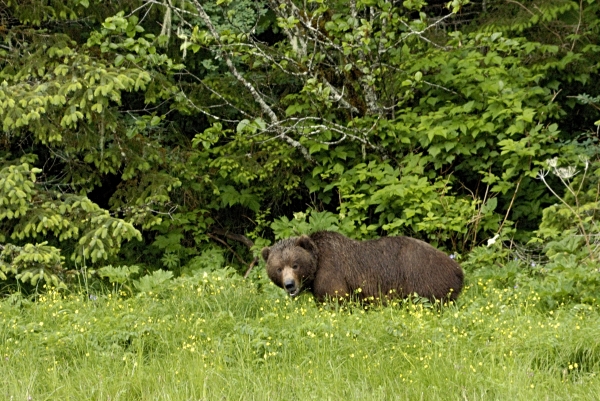 We had the bay all to ourselves for almost a whole day, then we were joined by another smaller cruising boat.  The next day we had two of the smaller cruise boats stop in for a few hours to visit, and the morning we left we saw the National Geographic Sea Lion come in for just an hour.  Although these smaller cruise boats are a fantastic way to see Alaska and get closer to the wildlife, I feel sorry for those people.  They come in and have to hope for a glimpse of some interesting critters during their brief stay.  They can enjoy the scenery but we have the luxury of staying in that magnificent setting for as long as we want – to see the cliffs in sunshine as well as with the moody feeling from mist or when low clouds hang on the mountains.  We can kayak and explore at all times of the day and states of the tide.  We have the time and opportunity to enjoy “dinnertime bears” and we count ourselves lucky to be able to do this.