We left Ketchikan and stopped for an afternoon and overnight in a little place called Meyers Chuck.  It’s a cove with about two dozen or so houses, though we heard that only a few people live there all year round.  There is a post office, and one of the year-round residents is the Post-mistress; her husband is a really nice gentleman we met on the dock – Steve.  Steve is in his late 70s or 80s and has lived in Meyers Chuck since he was 7 years old.  He has never driven a car. 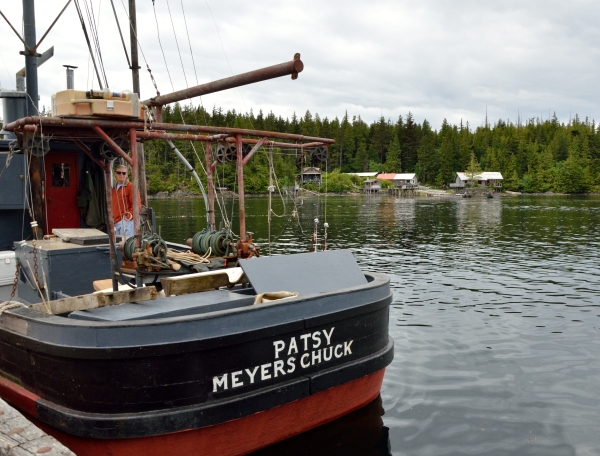 We enjoyed talking with Steve while he worked on his troller fishing boat “PATSY”.  He was working on repairing some wood rot and he was using a torch to burn away some paint around the rotten section of wood.  We talked for a while after Steve finished using the torch – at least half an hour, and then he got into his skiff and headed home across the cove.  A little while later Jim happened to look out the back window and he noticed a tendril of smoke coming from PATSY’s wheelhouse.  He ran over to check, and sure enough… a hidden ember must have been quietly burning in the rotted section, and it started to grow.  By the time Jim climbed back aboard with a some water and I had a fire extinguisher, it was smoking pretty well.  Fortunately the area was very small and Jim was able to thoroughly saturate the wood with water.  We found one of the locals who called Steve to come back over, and he was very appreciative.  The scary thing is that there were a number of boats tied to the dock, and most everyone was off hiking.  If Jim hadn’t seen the smoke and caught it early, we might all have been off hiking and the result could have been much much worse.  Jim is now an Honorary Member of the Meyers Chuck Volunteer Fire Department. 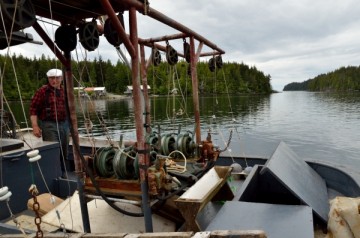 Steve’s boat is an example of one of the methods of fishing used out here – trolling.  You can see the three green reels on each side of the boat in this photo, and each line has a number of hooks on it to catch salmon.

People here are very independent and self-sufficient.  Mail is picked up on Tuesdays – a plane comes to get it from Ketchikan.  There’s even a Post Office box on the dock side of the cove, across from the actual Post Office shack for convenience. 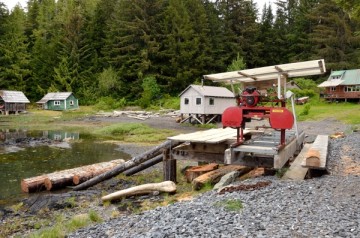 We liked this little sawmill – we’ve seen a number of them in BC and here in Alaska.  If you want to build a house you just fell your logs and fire up your sawmill to cut the lumber that you need!  The sawmill is located at the water’s edge since logs are much easier to move around by water, and you wait for high tide so you don’t have to drag the logs as far.

There was a nice hiking trail through the woods that led to a small rocky beach, and we were cautioned to be “bear aware”.  From what we’ve read and been told, we should always be prepared for bears anywhere except in towns with paved roads.  We carry bear spray, bear bells, whistles, and we don’t carry food when we hike.  Bears just don’t like to be surprised, so making some noise is a good thing.

As we walked behind some of the Meyers Chuck houses, we found this wonderful bit of fishing net that looked just like a flower… 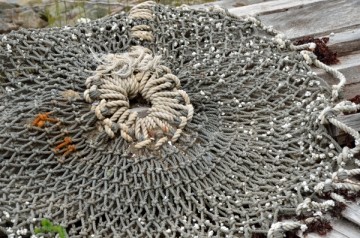 The beach was pretty and we always enjoy a nice hike through the woods.  I went back again later with a macro lens to photograph some of the little details in the forest.  Didn’t see any bears – our bells must be working!

We headed out the next morning and cruised to the town of Wrangell for a quick overnight.  It was good to see it for ourselves – there’s a big boat yard with some huge travel lifts so we know we can go there if we need to do any major work on the boat.  The town was very small though – it was one option we considered for the winter but we’re glad we’ll be in Petersburg, which is larger.  We checked out the reconstructed native ceremonial house near the marina office, and had a fantastic burger at the Stikine Inn. 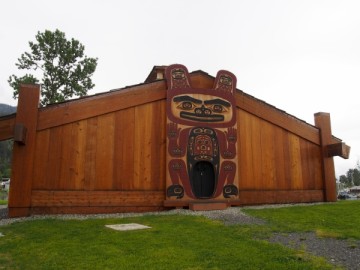 At this point our goal is to get to Petersburg where we’ll spend this coming winter, and we wanted to get there to meet with the harbormaster to make the arrangements for our winter slip.  Once that is done we can shift into a slower “cruising mode” and take our time exploring all these places.  We had a brief view of an orca passing us in the Wrangell Narrows channel, and arrived in Petersburg at the brand new north docks.  It was a rainy-misty day, but we had some pretty light at sunset right from our slip. 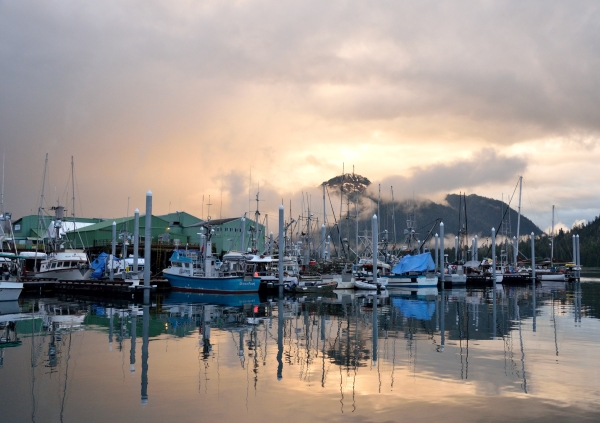 Petersburg is a serious fishing town, with a few canneries in between the sets of docks.  Bald eagles and ravens swirl around the skies, especially when boats are unloading at the cannery docks.  We’ll write much more about Petersburg in the next entry.  We’re pleased with the location for the winter – protected, clean, and nice, and the views of the mountains all around are gorgeous.