We traveled 278 nautical miles in 6 days from Princess Louisa Inlet through Desolation Sound, the Broughtons, and around Cape Caution into northern British Columbia.  Cape Caution can be a nasty area, and the wind, wave, and tide conditions have to be right to make an easy and safe passage.  Jim saw a good weather window a week ahead of time, and it remained open as we proceeded north.
Here’s a map showing Vancouver, Princess Louisa Inlet, all of Vancouver Island (which is about 300 miles long by 50 miles wide), and our anchorage in Fury Cove. 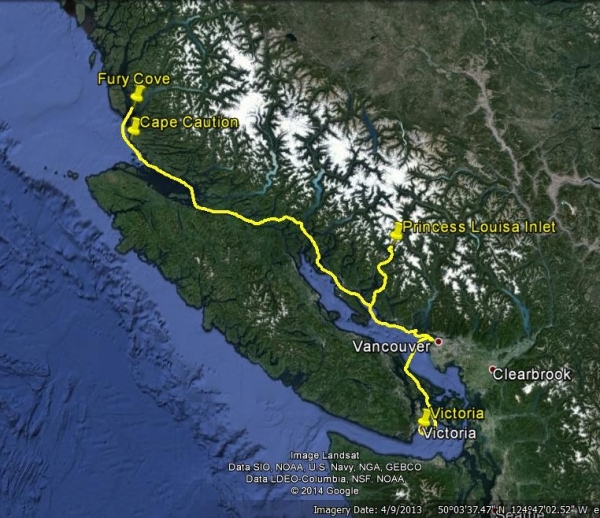 It was very hard zooming through such great cruising areas in Desolation Sound and the Broughtons which we enjoyed last summer, but we’re focused on getting up to SE Alaska and we can’t afford to dawdle too much.  On top of that, a great weather window is worth its weight in gold. 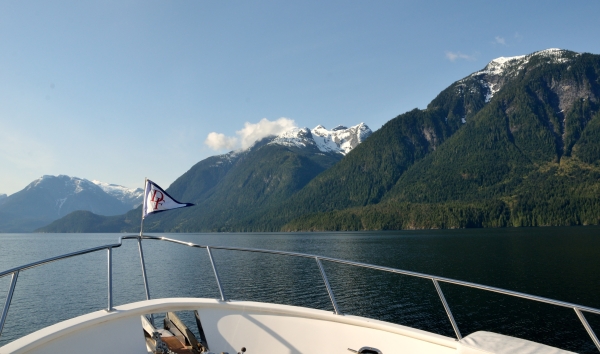 There are two paths to get from Desolation into the Broughtons – the “back way” through five rapids, or Johnstone Strait and Seymour Narrows (where the big ships run).  We’ve taken both paths and they both require some timing of tidal currents, but we thought the “back way” was prettier and more protected from wind.  Rapids, you say?  It sounds really crazy, but the rapids are only dangerous when the tidal current is running (and then they can be truly evil).  At slack current they are like a mill pond, and that’s when it’s safe to transit them.  The cruising guides explain how to time the rapids so you can do a few at a time – there are three very close together but the third one (Dent Rapids) must be done at dead slack, so we have to deal with the tail end of the tide against us through the first two. 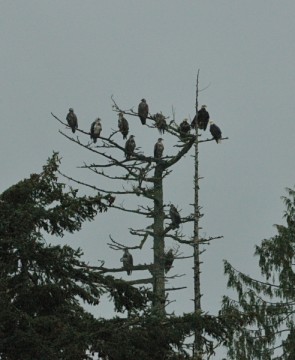 As we came through the second rapids we saw well over a dozen bald eagles soaring or perched in the trees, some mature and some young ones.  It was an amazing sight, but we could only grab a quick photo since we were busy navigating through a narrow area – I guess the eagles prefer to hunt in the churning water there.
After the first set of three rapids we had to stop for the night since we couldn’t get through the other two on the same tidal change. 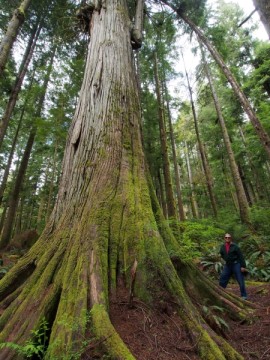 We tied up at Blind Channel Resort (the term “resort” is rather misleading) and we were able to explore some hiking trails through a 90 year old second-growth forest.  One of the hikes led up to a huge western red cedar that is 16′ in diameter and is thought to be over 800 years old.

The next afternoon we ran the remaining rapids with no problems and continued to head north as Jim monitored the weather.  Our window remained open so we anchored in a protected anchorage as close to Cape Caution as we could get just in case the window started to close early – we knew a storm front was approaching.  On Monday (5/12) we headed out at 0600 in the drippy rain to round the Cape after a final check of the weather radio indicated good conditions.  We had a nice easy ride – the seas were rippled, winds were light, and there was just a slight swell… by 1130 we were tucked safely into Fury Cove – a nice way to celebrate one year since ADVENTURES arrived in the Pacific Northwest.

Fury Cove is a beautiful, remote spot with great protection and a pretty shell beach.  We watched loons, mergansers, and eagles, and saw a little marten (a cousin of the weasel or mink) scampering over the rocks.  We had a view of Fitz Hugh Sound, but were safe from wind and waves. 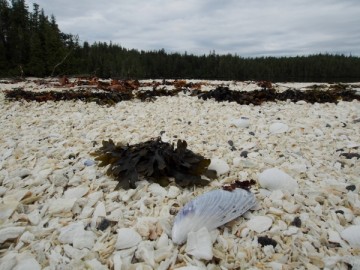