We anchored in Pruth Bay (about 20 miles north of Fury Cove) near the Hakai Beach Institute, an independent scientific research outstation with some nice facilities and a lot of different sized boats.  The attraction for us was access to some beautiful remote sandy beaches open to the Pacific.  As with all the shorelines around here there were countless logs piled up high up on shore, weathered to a silvery finish. 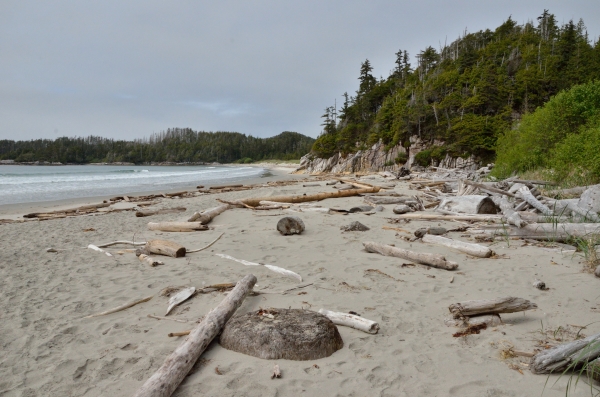 Note that some of the logs can be really big (Jim is in a red jacket sitting at the far end) – this is one reason people don’t run their boats at night in this region – hitting something like this would really ruin your day! 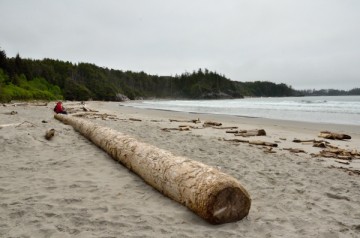 One of the beaches was a short hike through the forest on a maintained trail with boardwalks, but the other beach was a much longer hike, past a pond, scrambling up and down and through quite a few places that were very very muddy… but well worth the mess.  We found very few shells on these beaches, but the northern beach had a lot of different colored granite rocks, polished round and smooth clacking gently in the surf.  I must confess to having a weakness for beachcombing, and that includes interesting rocks as well as shells.  Let’s just say that I couldn’t resist some things, and it made my heavy camera bag much heavier as we slogged through the mud and scrambled up and down the trail.  We read reports of wolf sightings here, but we didn’t see any.

While I was photographing some of the little shore birds (dunlin, whimbrel and plovers) Jim called my attention to an otter that popped up from behind the dune and scampered down to the ocean. 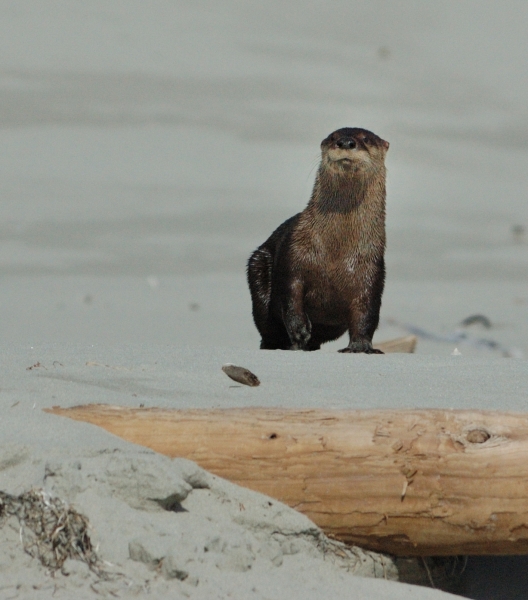 We came back to the beach the next day and enjoyed a picnic lunch, and we spent some more time photographing the shore birds as well as some macro subjects in the forest.  We saw several eagles soaring, and a mink in the woods. 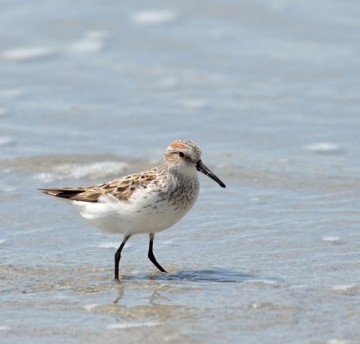 We had an odd thing happen that had us concerned at first.  We left our dinghy tied up to the Institute’s dock near the sign saying that visitors were welcome.  When we got back several hours later it looked like our dinghy had been ransacked – there were things taken out of the under-seat bag, and the life jacket and shammy tucked between the seat and the fuel tank had been taken out.  The boat was other wise clean and neat so it couldn’t have been otters.  Otters leave a horrible mess – nature’s equivalent of a frat party.  There was no one around to ask, so we wondered if maybe someone from the Institute was checking out our dinghy, and it made us feel a little creepy.
The next day we tied the dink up and went ashore, and when we returned we found a few things laying on the deck, but the boat was otherwise clean.  Jim found someone to ask about it, and they told us it was a raven.  Apparently the local ravens know that boats might have fish or food, and they boldly go looking for things, getting into bags and coolers.  Mystery solved! 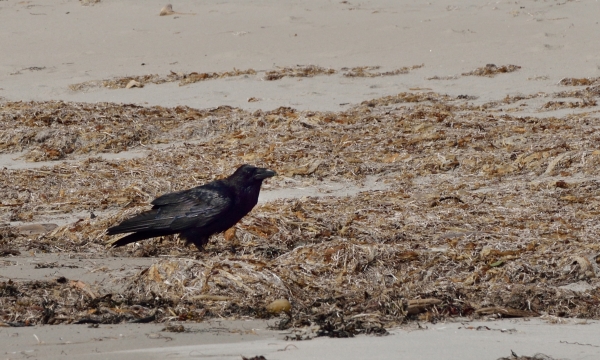 2 thoughts on “Pruth Bay and a Mystery”