We had good weather for the passage into the port of Ketchikan, though the leaking hydraulic hose the day before was a hint of more things to break.  We cleared Customs with just a phone call – we had submitted a Float Plan via Customs’ Small Vessel Reporting Service that had all our boat and personal information, and we called ahead from Prince Rupert.  We just had to call as we were approaching the harbor to get our clearance number, and the officer told us that we were the only people to use the Float Plan system this year.

Armed with our clearance number we could proceed to the fuel dock to fill all our tanks.  When we fuel Jim operates the nozzle and I’m down in the engine room (“bilge bunny” duty) to watch the sight gauges on each of the 4 tanks.  We have 2-way radios and I let him know as we reach certain thresholds.  While we were fueling I saw that the hot water heater overflow was overflowing, and Jim told me that it sometimes happens because it’s in the engine’s water circuit (free hot water when that engine is running).  The only problem was that it kept overflowing and it should have stopped, so we had to shut off the water pump.  Which meant no water to wash our hands after fueling.  Then we tried to start the engines to leave the fuel dock and the battery switch for the engine start batteries was cracked.  Gremlins!  Jim just flipped another switch to start from the house bank and we were on our way, but we felt spooked by the sudden rash of little problems.

We tied up in Ketchikan’s Thomas Basin among the commercial fishing boats, with a huge cruise ship just outside the basin. 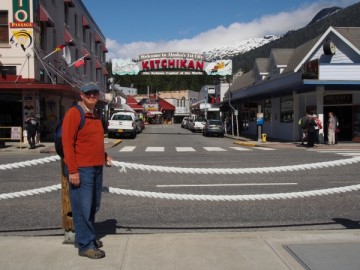 Although it was a Sunday we lucked out – the hardware store was open for a few more hours so we caught the city bus and zipped up to get a new overflow valve for the hot water heater – that was the first priority so we could turn the water system back on.  We found what we needed and a spare just in case, and walked back to the boat, passing the cruise ships getting ready to depart.  It was a good way to get a little overview of the town as we walked back, but we were focused on getting the hot water heater fixed so I could finally have a shower!

Here’s a map showing our path from Victoria, BC to Ketchikan, AK – we’ve traveled 804 nautical miles in the last 4 weeks. 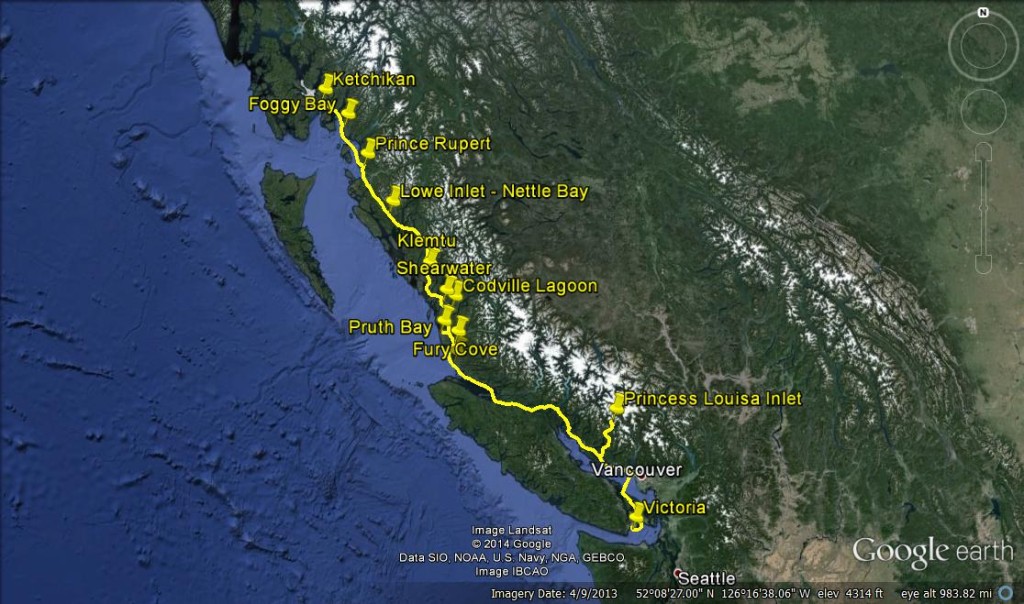 The next day was Memorial Day so we explored the town and relaxed a bit after the long days underway.  There are 3-4 cruise ships in town every day, and someone told us that there are sometimes more, so the town can be quite crowded for a while.  We watched groups heading out on kayak tours, fishing tours, high-speed catamarans going to the Misty Fjords National Monument, and float plane flightseeing tours.  In fact, we were buzzed repeatedly by a long string of float planes as we were entering the harbor – now we understand what that was all about.  When the ships leave in the afternoon the whole town breathes a sigh of relief.  The tourist shops close and the only restaurants and stores that stay open are the ones that serve the locals, which we enjoyed. 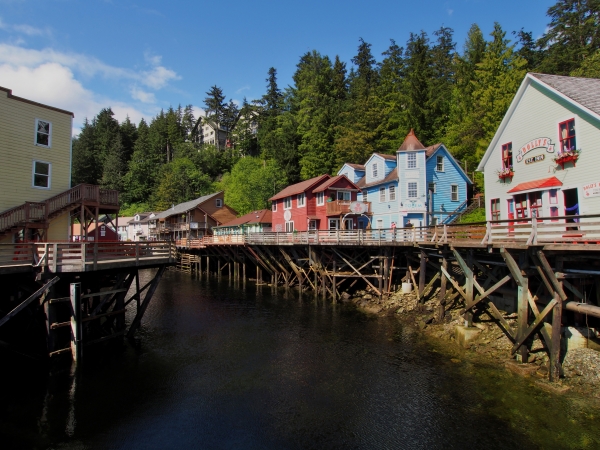 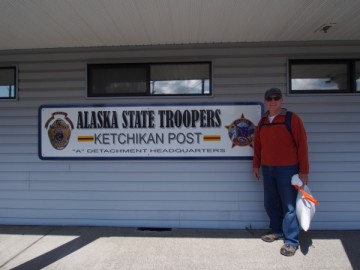 As soon as the holiday weekend was over and the marine services opened back up we hopped on the city bus to find the hydraulic shop.  The shop was located behind an Alaska State Trooper office at the other end of town, and I couldn’t resist a photo op because of the TV show…

The hydraulic guy was very nice and in just a few minutes we were on our way, though we had a long wait for the bus which only runs once an hour.  Fortunately, normally-rainy Ketchikan was enjoying a week of beautiful sunny weather and it felt great to just sit outside for a while.  On our way back to the boat we stopped at some marine stores for a few more parts for our various little repairs.  Jim fixed everything pretty quickly and we made plans to take a float plane tour of the Misty Fjords area since we don’t have time to explore it by boat right now.  We’re very excited about the flight, and the weather should be great for it.  We’ll post more about the flight in the next entry. 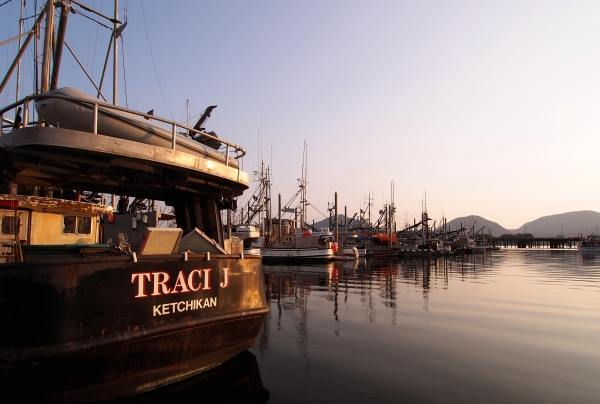