In past years we would make the trek from the Florida Keys up to the big Miami Boat Show for one long marathon day to talk with all the vendors and suppliers in the enormous Convention Center.  We made up lists of questions and things we might want to buy well ahead of time – the boat show is a big deal for us.  This year we went to the Seattle Boat Show instead, and it was a different experience – more than just the temperature (which was a reasonable 50).

Most boat shows run for a long weekend but the Seattle show runs for 10 days, which is both good news and bad news.  The bad news is that it’s too long and most of the major suppliers don’t participate – the return-on-investment isn’t worth tying up some of the sales force for that long.  The good news is that the show offers a ton of seminars – many free 50 minute sessions as well as some inexpensive 3-hour in-depth sessions, so we spent a number of days learning more about boating in this area.  The seminars were very good, and we were able to get a ton of great information about routes and weather for heading north to SE Alaska as well as other little tips, history, and information. 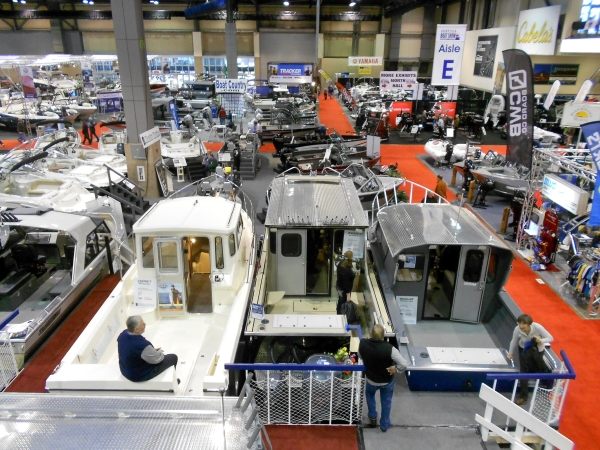 The show floor was smaller than we’re used to, but it was interesting to see the different style of boats used in the northwest, as well as the emphasis on fishing, crabbing, and prawning.  I don’t eat seafood so it’s all lost on me;  the locals can’t figure out why anyone would want to boat out here if you don’t care about the seafood.  Dare to be different.

The boat show was held at CenturyLink Stadium (in the conference center and indoor areas), which is the home of the Super Bowl Champion Seattle Seahawks.  Every day at lunchtime the facility opened the field for boat show attendees, and it was really cool to walk out on the playing surface of an NFL stadium!

Being in Seattle the week before the Super Bowl was a blast.  I’m a life-long NY Giants fan, but I can appreciate any town where they are passionate about their team… and people from this area are truly rabid fans.

It’s a bit of a trek for us to travel from Victoria down to Seattle (by car).  30 minute drive up to the ferry, 90 minute ferry ride over to the mainland (wiggling through the beautiful Gulf Islands – always fun), a 30 minute drive to the US/Canada border, then a 3 hour drive down to Seattle.  We take advantage of being in the US to mail things (it’s faster), and buy a few things (it’s cheaper, minding the rules about what we can bring back into Canada)… so it’s always a Big Trip with lots of errands and shopping.  We also took our amateur radio (ham) license exams, and we both passed the Technician and General.  Ham radio will let us add more communications capability in remote places with the SSB/ham radio we have on our boat, and it will be fun to experiment with a handheld ham radio when we hike up tall mountains, etc.  Studying for the exams was a good challenge too, and we might go for the next license level when we have time next winter.  Never stop learning.