Chatham Strait runs between Admiralty Island to the east and Chichagof and Baranof Islands to the west, geologically part of the Denali fault.  This is a “transform” type of fault, where the sides slip laterally.  There has already been about 120 miles of lateral slip based on study of the adjacent islands – the west side has slipped to the north. 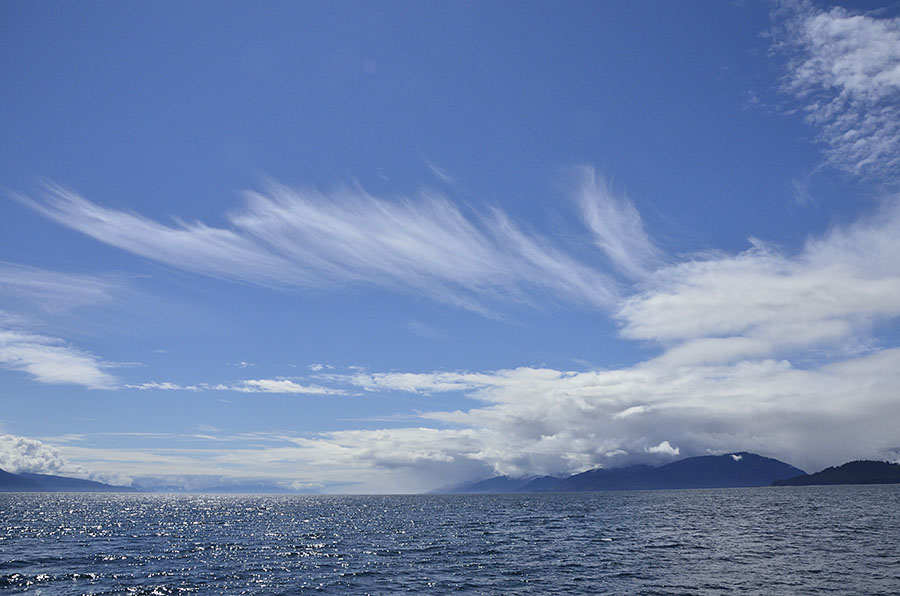 We haven’t stopped in the tiny community of Tenakee Springs for a few years so we headed there with dreams of their famous cinnamon buns in our heads.  Fortunately we got to the bakery just in time to get the last fresh buns, and unfortunately we saw that the bakery is for sale!

Residents of the community were in a happy mood because the Alaska State Ferry had just docked, bringing people home as well as lots of boxes and waterproof Rubbermaid totes full of packages and provisions.  We watched a constant procession of smiling people rolling overloaded handtrucks to their homes.

Tenakee is known for its natural hot springs, plumbed into a small block building for public use.  Bathing there is Japanese-style, where you wash in a separate room before you enter the bath.  Posted hours segregate men’s and women’s use of the bath throughout the day, important since no bathing suits are permitted.  We just enjoyed strolling the “main street” – a dirt road that runs just above the shoreline, noshing on ripe thimbleberries and admiring people’s gardens.  A sure sign that autumn is on the way – fireweed starting to turn to seed. 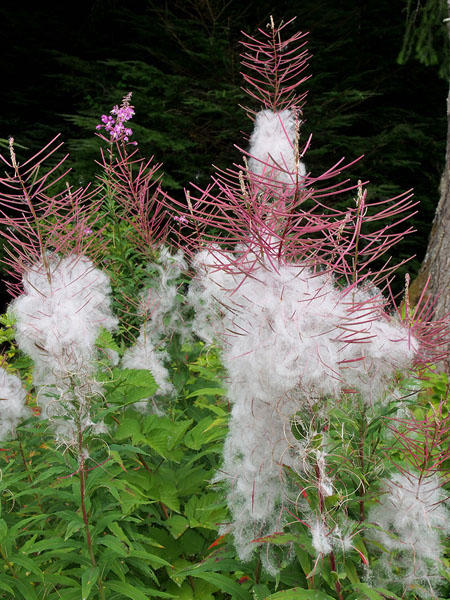 Tenakee is a fun and funky place, where the only vehicles are ATVs and there aren’t enough children in town to keep the school open (a community needs at least 10).  Residents are friendly, and they have a good sense of humor. 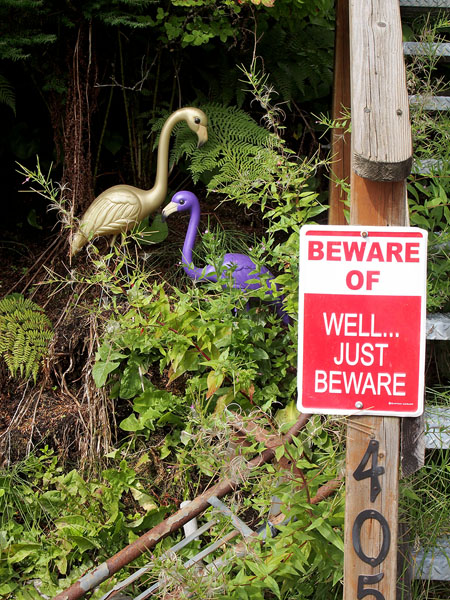 Leaving Tenakee we had a long passage to our next anchorage, interrupted by a pod of orcas! 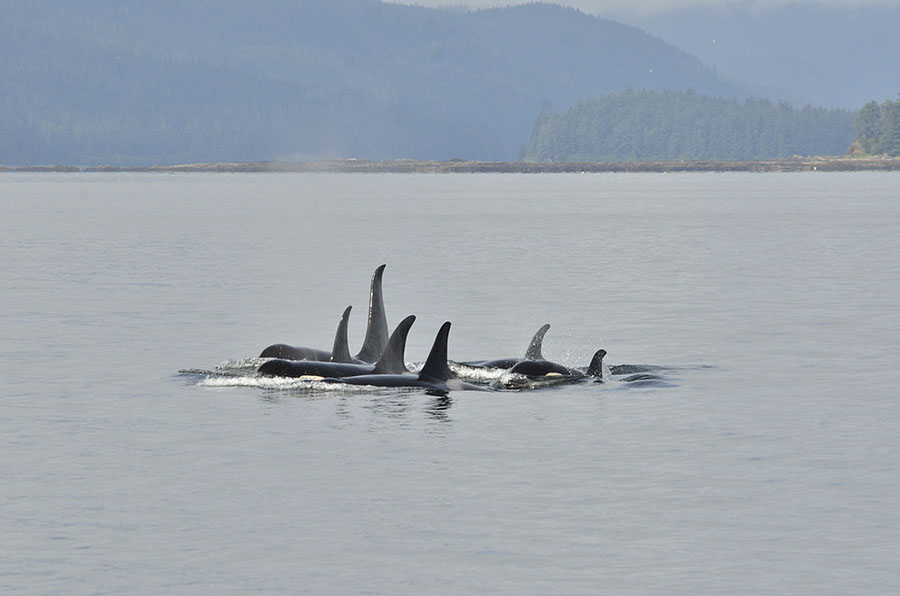 The big dorsal fin belongs to a male – that fin can be up to five feet tall.  We saw calves as well as adults, and luckily they were moving in the same direction that we were. 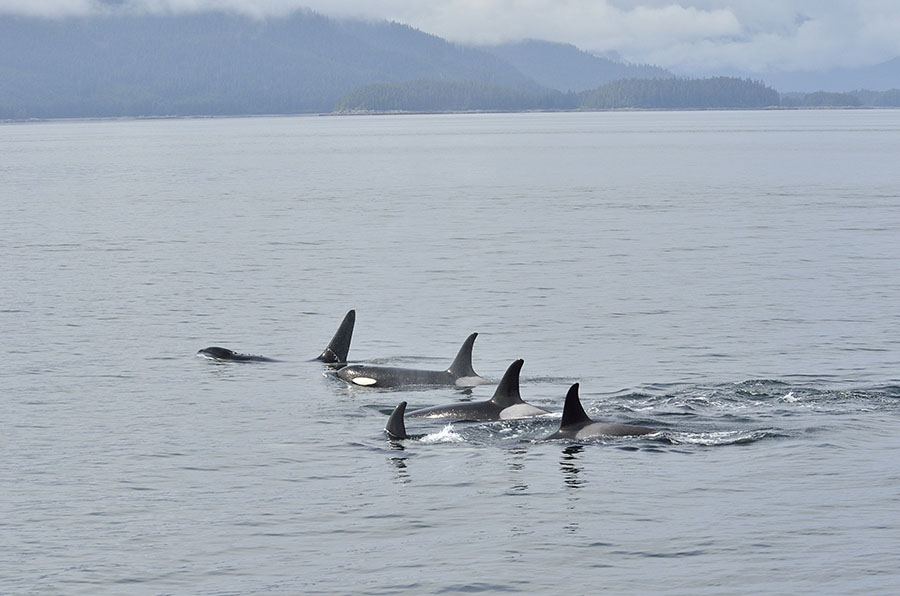 At one point they all dove, and then popped up close to the boat! 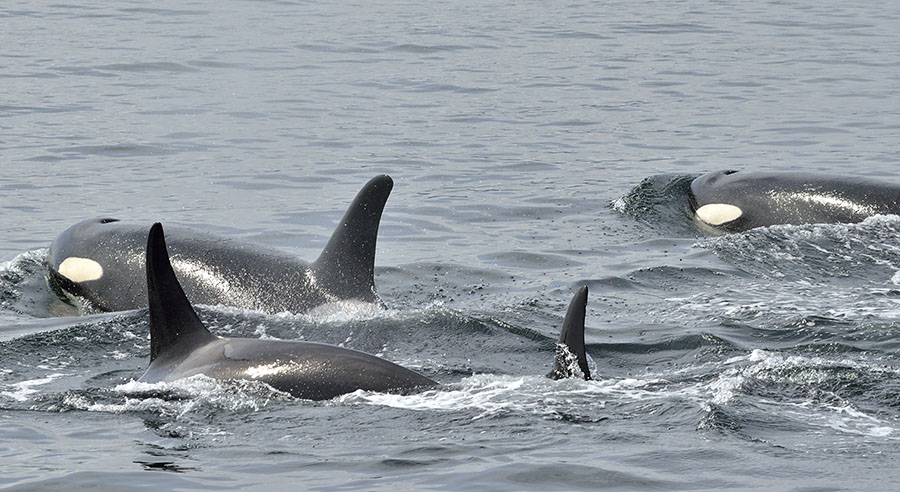 As they dove and moved off, following whatever food they were hunting, one of the orcas slapped its pectoral, slapped its tail, and then spy-hopped.  What a show! 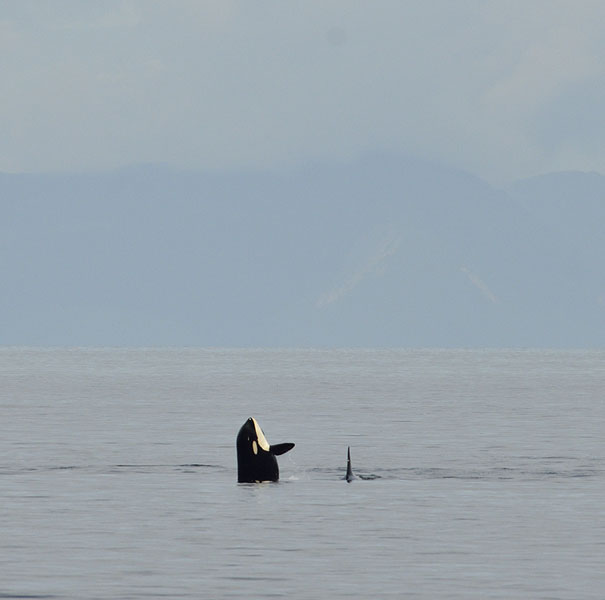 We anchored for the night in a pretty spot where we’ve stayed many times before – Takatz Bay.  The water was very silty, turning it into a pale turquoise color.  I love how it looked against the forest’s many different shades of green. 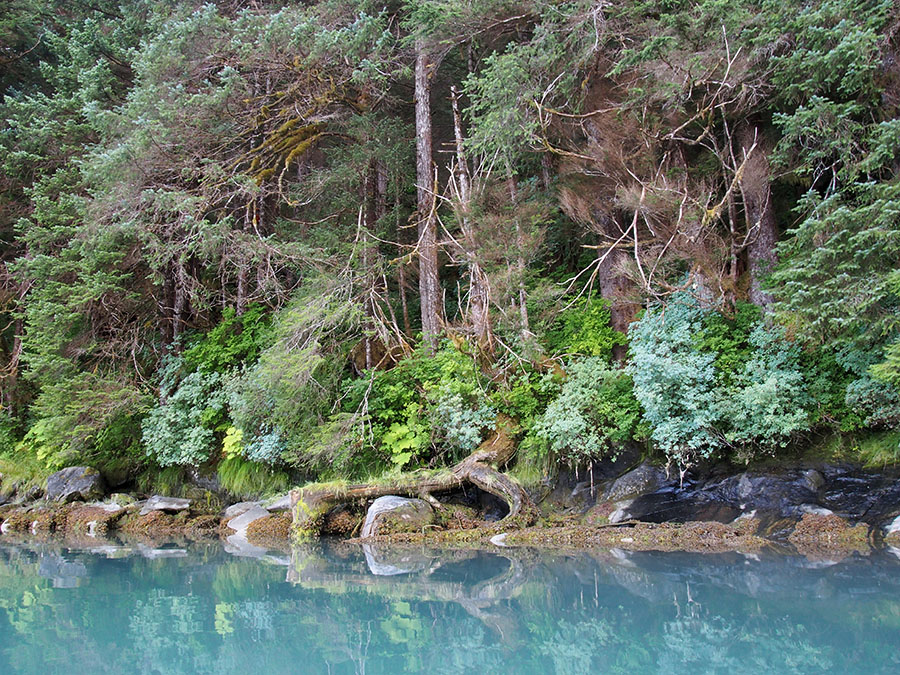 The rocks in Takatz are very photogenic, many with stripes like a tiger’s, and other colors caused by water and lichens. 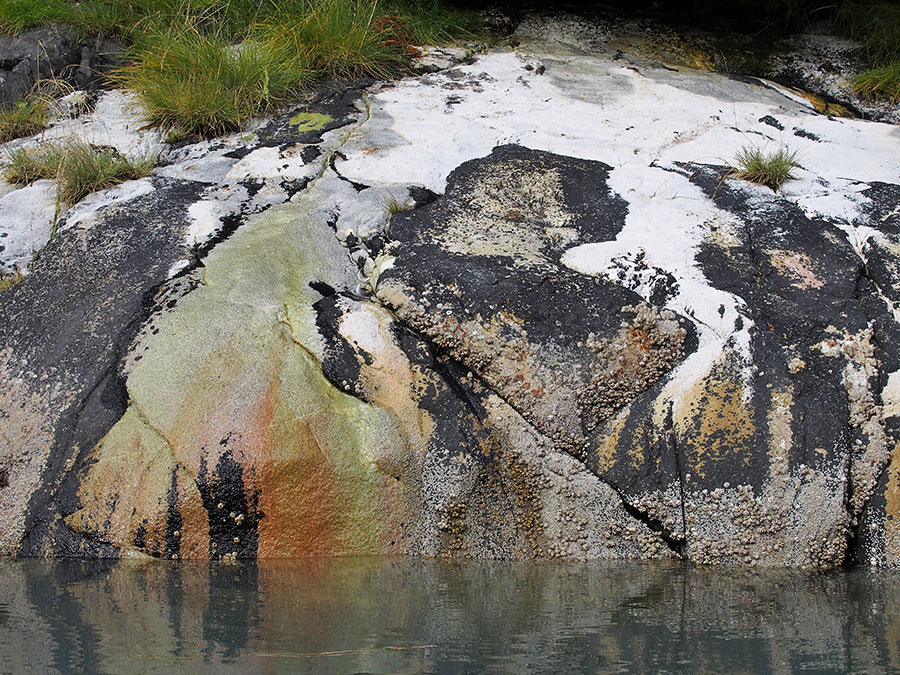 Takatz has a stream, but it’s not a major one for the salmon.  A few fish were around, and a brown bear was napping by the shoreline – the first one I’ve seen there.

As the tide rose I spotted five blue herons fishing in the shallows.  It seems strange to see a bird that we always thought of as a summer or southern resident on the east coast, but we have them up here year-round. 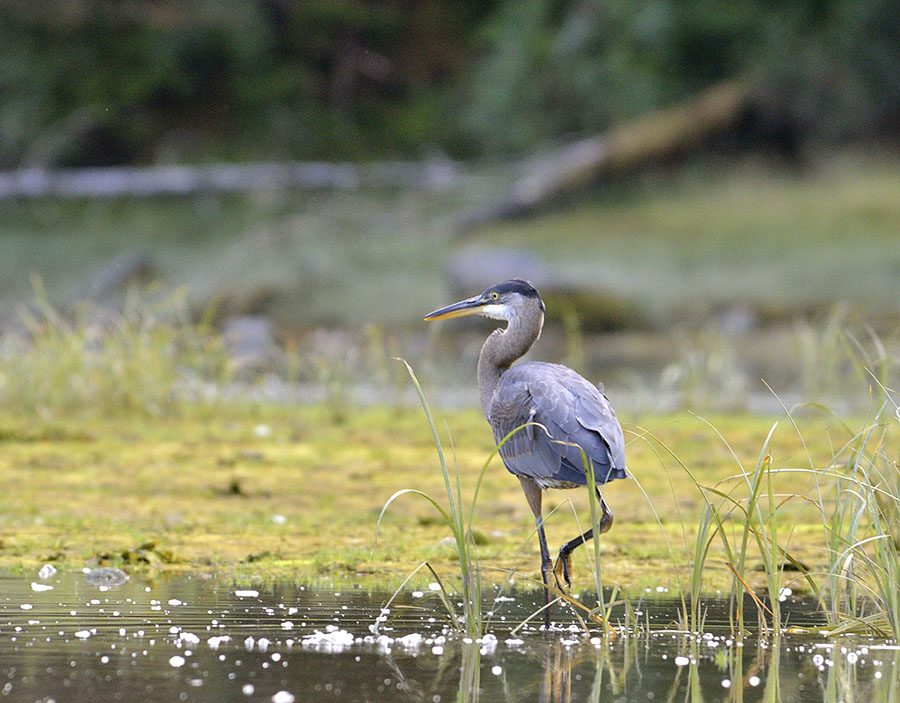 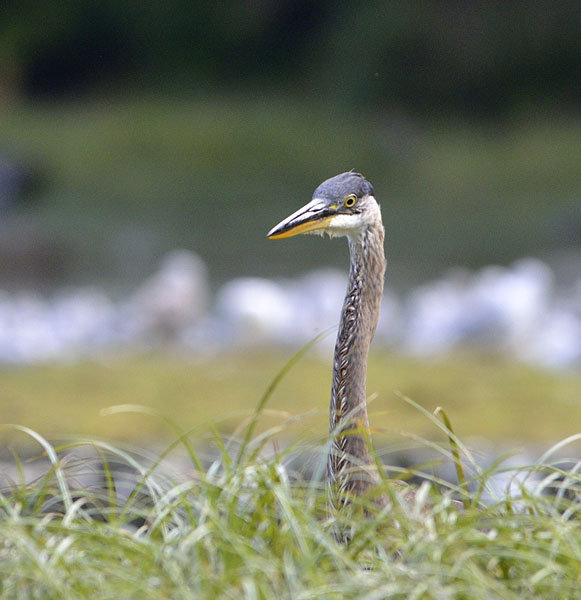 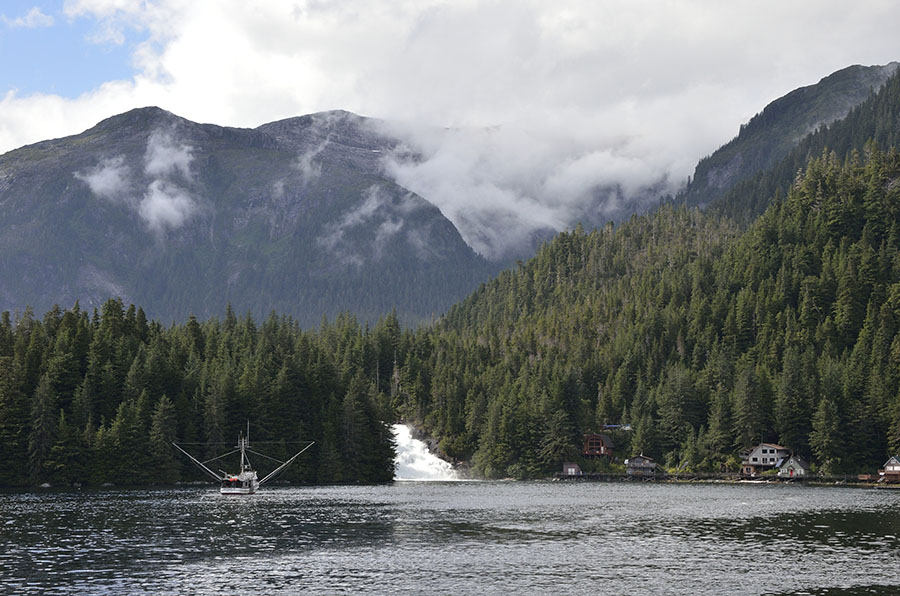 There’s a roaring waterfall and a tiny cluster of houses along a boardwalk overlooking the bay.  As the name implies, there’s a natural hot spring nearby – access to the rocky pool requires a hike through the woods, but there’s also a little bath house with three private “booths” so you can have a nice soak without climbing over rocks and roots while carrying your bear spray. 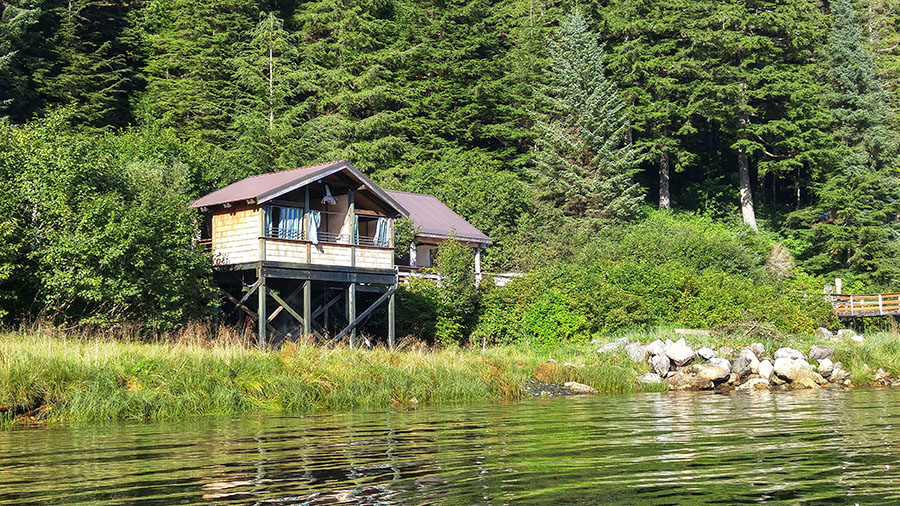 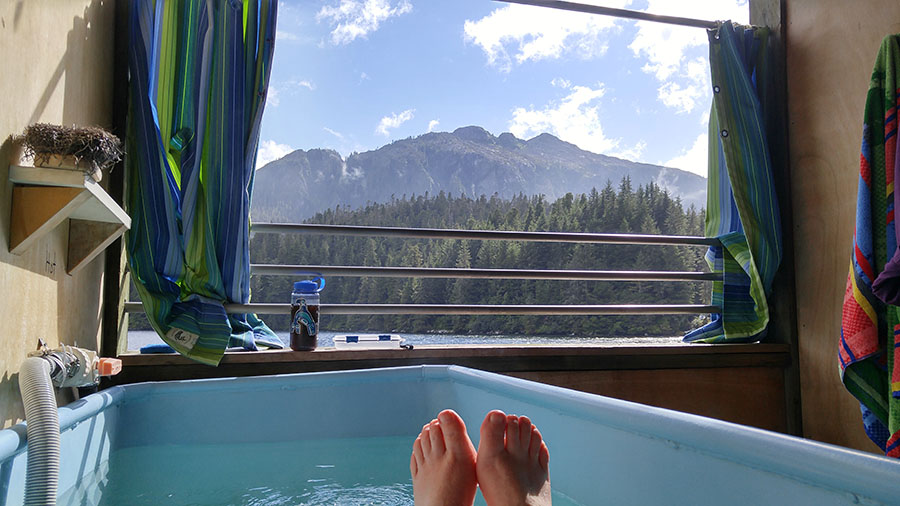 3 thoughts on “Adventures in Chatham Strait”